Revolution Precrafted founder Robbie Antonio is disrupting the world of real estate, at both the high and low ends.

Robbie Antonio is restless. The Filipino entrepreneur is on a mission to disrupt the traditional real estate and property development business by democratising high-end architecture.

His company, Revolution Precrafted, is making the designs of some of the world's leading talents available to more developers and homebuyers. He envisions operating on a global scale with no inventory in hand while growing at an exponential pace.

Established in late 2015, the Manila-based company supplies transportable collections of limited-edition and customisable prefabricated properties exclusively designed by 80 of the world's top architects, artists and designers it has dubbed the "Revolutionaries".

Mr Antonio's company has already become one of the very few Southeast Asian unicorns -- startup businesses valued at US$1 billion or more -- and is on a seemingly unstoppable expansion spree, sealing multi-million dollar deals around the globe almost every month. 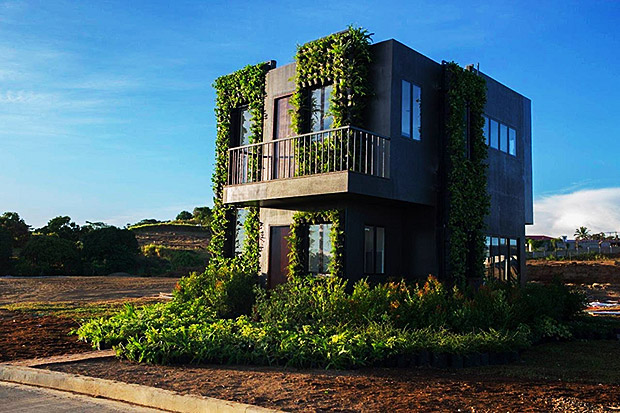 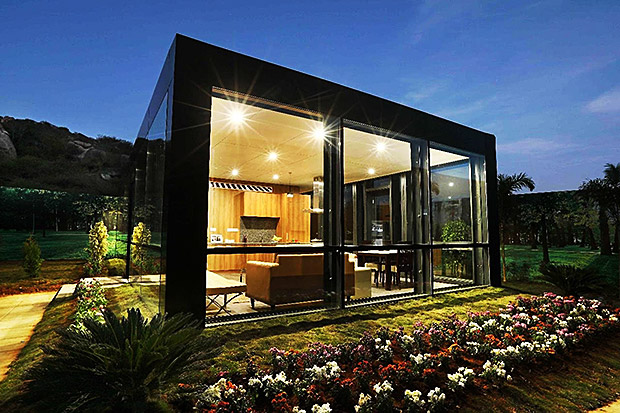 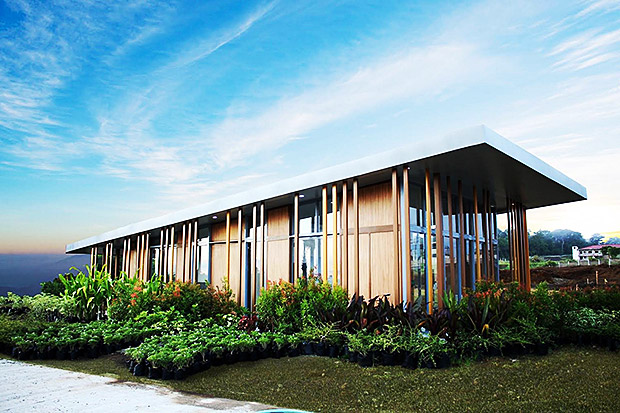 Among the worldclass designs offered to customers of Revolution Precrafted (clockwise from top left): The Volu Dining Pavilion by Zaha Hadid, Hedera by Kenneth Cobonpue, the Butterfly House by Elizabeth de Portzamparc, and the Modular Glass House by Philip Johnson Alan Ritchie Architects.

Its latest series B funding round was co-led by Singapore-based K2 Venture Capital, known for its investments in Alibaba and Twitter before their public offerings, as well as other unicorns including Spotify, Magic Leap, Paytm and Palantir.

"It's not enough to be in one city, one country or one region. I want to be ubiquitous. I want to be everywhere in the world. I want to be super-scalable, super-fast and I want a hyper-growth business that disrupts the space that I know very well," Mr Antonio tells Asia Focus during a short visit to Bangkok recently.

The 41-year-old designer and real estate developer is dressed stylishly as always, his trademark raven-black hair combed, gelled and neatly swept back. His enthusiasm and fast-paced lifestyle are reflected in cat-quick gestures, multitasking behaviours and rapid-fire chatter.

Revolution Precrafted has earned US$8 billion in revenue to date from ongoing projects in the Philippines, Myanmar, the United Arab Emirates, Jamaica, Guyana, the Bahamas, Trinidad and Tobago, Puerto Rico and Japan. Currently present in 17 countries, with a target of 25 countries by year-end, Mr Antonio aims to be in 85 countries by 2020, and to possibly go public after that.

With one of the largest global footprints among Southeast Asia-based startups, Revolution Precrafted has embarked on some highly ambitious and iconic projects, They include a $3.2-billion partnership to build hotels and apartments for The World Islands in Dubai, a $2.8-billion luxury boutique hotel project in Japan, a $1.2-billion riverside project called Okkyin City in Yangon, and a $300-million exclusive deal to supply 1,000 residential prefabricated designer units for the Caribbean market.

"If I'm in a country and I don't do a project, it's vexing for me. If I go to the Maldives, I'll need to have a project. If I go to Fiji, I have to look at a piece of land," Mr Antonio declares, adding that he is also eyeing projects in Thailand, but the key is to collaborate with the best local minds, design talents, developers and landowners.

His own desire for instant gratification is perhaps one of the main drivers of the company's rapid ascent to unicorn status. "Continuing the speed and momentum is important for us," he admits. "Once you lose momentum, you will start losing the projects. I'm steadfast in my goals."

It's difficult, or perhaps impossible, for Mr Antonio to slow down. His mind is always racing, always thinking, and every second of every day is always about new business and new opportunities.

His restlessness, however, does not bother him in the least. "This is enjoyable for me," he says with a laugh. "This is the trick: If you find something that you really, really like doing, and work really, really hard, you will enjoy it and be good at it."

Concurrently during the interview, Mr Antonio switches topics and points outside the window and asks a colleague to look at a Bangkok skyscrapers owned by a top local real estate developer; then he confirms the time for his next media interview before taking a big bite of a burger that has just arrived.

"I'm eating when I'm talking with you, see? I'm always multitasking, and always trying to get everything done at once," he says.

His way of relaxing is to watch some television in the evening, "but I still work while doing that", he says, chuckling.

"My impatience is my biggest weakness and my biggest strength," he says. "Sometimes it's too much but sometimes it's good because it drives me to want more. I'm never satisfied."

Mr Antonio is also a man dedicated to a strict regimen: every day he wakes up at 5am, messages his team asking for progress reports, then works out for two hours -- mostly gym sessions, squash or tennis. He gets to the office by 9am and trains again in the evening before returning to work. "I always make time (to exercise). I've disciplined myself this way since my 20s," he says.

The disruptive value proposition of his company is a reflection of Mr Antonio's own personality and characteristics: speed and efficiency, state-of-the-art quality, stylish branding and the impulse to stamp his name on a global scale.

"I have always had the desire to be global and to do things in a big way. It's very important for me to be everywhere and do things that have not been done," he says.

The prefabricated properties built by Revolution Precrafted are stylishly designed by Pritzker Prize-winning architects, the world's top designers and artists, but they can be built in as little as 60 to 90 days.

The company offers product lines that are highly customisable in a wide range of designs that cater to any location, function and taste, covering everything from homes, hotels and villas to pavilions, museums, glamping (luxury camping), and condominiums to pop-up retail, offices, co-working spaces and furniture.

Through the utilisation of advanced robotics and other technology, the construction can be done in a more cost-efficient manner and requires a significantly lower amount of labour while allowing precise conformity to the relevant local building code standards and greater quality assurance.

"We are asset-light and we are made to order. We are the only branded housing company in the world and we can build homes in 60 days. The design democratisation we offer is impactful," Mr Antonio says with pride.

By drawing on world's top talents and using technologies, Revolution Precrafted is able to solve the common pain points associated with high-end real estate practices and design firms -- an industry that Mr Antonio knows very well given his decades of experience in the sector.

Though his father Jose EB Antonio owns one of the Philippines' largest real estate developers, Century Properties, Mr Antonio has never let the success of his family business overshadow his ambition to be global and disruptive.

After graduating from Stanford Business School in California, Mr Antonio spent five years in New York and founded his own real estate development firm, Antonio Development. It completed a luxury condominium project in Manhattan in collaboration with the renowned Chinese-American architect IM Pei, whose iconic creations include Le Grand Louvre in Paris and the Bank of China tower in Hong Kong.

Upon returning to Manila to serve as managing director of family-owned Century Properties, he oversaw some high-profile projects including Trump Tower Manila, which is the tallest building in the Philippines, and Paris Hilton's first real estate venture, the Paris Beach Club at Azure Urban Resort Residences.

Listed among the top 100 art collectors in the world in 2016 by the art market website Artnet, Mr Antonio is also known to be one of the youngest and most voracious collectors of international modern and postwar contemporary artists.

At the end of this year, he will unveil the world's first "liveable art park", Batulao Artscapes, a 350-acre development located about two hours' drive outside of Manila, combining his love of art with architecture.

Prospective homeowners can choose 20 designs of about 4,000 prefab designer homes with prices ranging from $60,000 to $600,000 (excluding land) and live in a space that showcases collections of modern and contemporary works by world-class artists, designers and architects.

Mr Antonio's infatuation with art even extends to portraits of himself. One project he called "Obsession" brings together some of the world's top contemporary artists including Julian Schnabel, Marilyn Minter, David Salle, Zhang Huan and Takashi Murakami to paint a series of more than 30 portraits of him, at prices of $50,000 to $100,000 apiece.

The portraits are stored in a private gallery in his 2,330-square-metre home in Manila designed by the renowned Dutch architect Rem Koolhaas, a project he named "Stealth".

Aside from his entrepreneurial success and obsession with art, Mr Antonio also makes time for charitable pursuits. He is a director of Operation Smile Philippines, a non-governmental organisation that mobilises medical professionals and volunteers to provide reconstructive surgery for children born with facial deformities such as cleft lip and cleft palate.

His other philanthropic endeavours include plans to build social housing by collaborating with governments across the world.

"We want to do well with what we know," says Mr Antonio. "We know this industry and we want to be able to use our business and products to make something good out of it. Not just in our country but for all the people who need it.

"We want to work with governments, use our technology and offer the same value proposition of speed and affordable prices for housing that does not look like a shack."

As our conversation begins to draw to a close, we ask about his recipe for success. His parting advice to all entrepreneurs out there: "Be super determined, be very ambitious, be hardworking and be smart about doing things. To unleash your full potential, you can't have just one, you need to have all these four attributes."