Technology enthusiast and designer Natthakit "Kimbab" Kangsadansenanon presents his largest project to date titled "Click Canvas". On display at Yelo House until July 29, the project reflects Kimbab's interest in technology and highlights a new way to engage with it. Instead of simply admiring the work, visitors must be the ones to create an image onto a blank canvas made of LED light boxes by pressing them. Guru spoke to Kimbab about his new interactive art, if we can call it that, and the interactions between humans and technology in today's world.

Tell us about yourself.

My name's Kim or Natthakit Kangsadansenanon. I finished a bachelor's degree in architecture [from Chulalongkorn's International Program in Design + Architecture], and I am interested in technology. I decided to pursue a master's that focused on technology and its applications in design. I did a master's degree on Computational Arts at Goldsmiths, University of London. When I came back to Thailand, there wasn't anyone doing what I do so I tried to find a venue where I could showcase the intersection between technology and design. I came into contact with Yelo House and ended up with 'Click Canvas'. 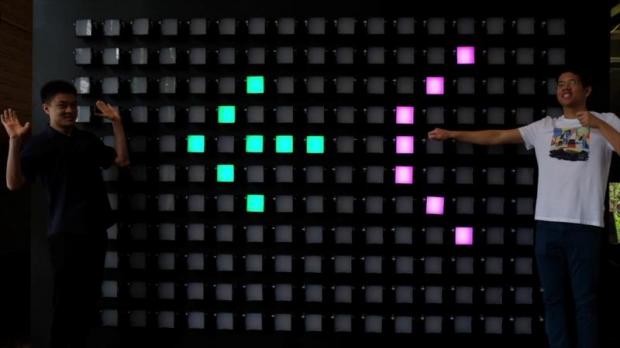 What did you study in Computational Arts? How does it relate to what you're doing?

We learned a variety of technical skills like coding and we were able to simulate graphics and animations. Another skill I was particularly interested in was physical computing, which focused on creating structures and writing programmes to actually change these physical features. It's hard to explain exactly what I do so I try to create things like this that people can interact with so they can appreciate it in a tangible form.

When I came back from the UK, I pitched 'Click Canvas' to Yelo House and made a small prototype so they could imagine what the final would look like. After the gallery okayed it, I went about making this piece, which is the biggest piece I've made to date.

'Click Canvas' features a grid of 17x11 boxes of LED lights. I chose these dimensions after I tested out the possibilities by inputting sample art work and words. If there were 400 boxes then people would get bored and not enjoy creating. Although my LED canvas consists of only 187 pixels, it has enough potential for people to create an image that doesn't look too low-resolution and that the others will be able to tell what they're looking at. First, I made a 3D file and sent it to get a laser cut of the boxes. Then I ordered the LEDs from China, which were colour-customisable through codes. I assembled them into boxes and that was set, but the electronics and wiring were the most difficult part. I previously worked with an 8-bit microcontroller and I tried applying it here, but it turned out that it wasn't powerful enough to handle LEDs on this large scale. So I had to study the way the more powerful 32-bit microcontrollers actually worked. The final result is we have four 'mini-brains' working in collaboration with a 'big-brain'. Basically, the mini brains would receive press input signal from the audience and tell the big brain that yes, this box turned green, and the big brain would be like, okay, and then the box would turn green.

Another challenge was how to actually assemble the piece in a short amount of time because we can't just come to the gallery and do all the wiring here. So we had to go out and find some additional electronic connectors that could help connect the wires and make it more compact, which took a lot of trial and error. I knew the direction I was going in, but I didn't know exactly every step of the way. Sometimes I had to sleep on it. But at the end, we ended up with this and from pitch to finish it took about two months.

I'm someone who likes to fiddle with things. When I go to museums and see sculptures and paintings, I know they have a story, but personally I wanted something that people can engage with and be creative with. That's why I made 'Click Canvas' interactive.

What do you want people to take away from 'Click Canvas'?

I think people understand the interaction between humans and technology as just through a touch-screen or mouse and keyboard, but I want to show them that you can create your own inputs and that's why I made this piece. There are other ways to create.

We've seen the other interactive works you've done via your YouTube channel. What do you call what you've created?

I'd call what I'm doing the intersection between technology and design. Technology is a tool, but it's the human input and creativity that makes it something different. There needs to be engagement on behalf of the viewer for the work to become complete. It's not just something which people can only look at because that's like staring at a blank canvas.

Currently, the works I've done on my YouTube channel and here on 'Click Canvas' feature LED lights but I want to emphasise that technology/design manifestation is not restricted to only LEDs. It can be kinetic structures and I want to explore something like that in the future, as well. I would like to go further than a flat canvas or screen, it has to have some interaction. 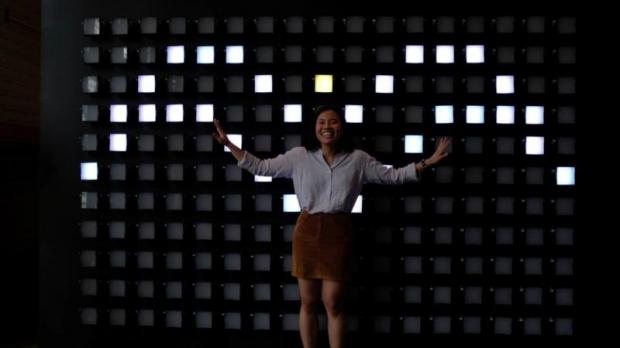 What's next for you?

People have to go click to 'play' with the canvas and after that I imagine they'll become bored, so I'm looking for new ways I can make people interact with the 187 units here. I've bounced some ideas back and forth with the gallery and one possibility is to make a game like Nokia's Snake and people can have a controller to change the direction and whatnot.

I'm quite interested in these simple games that don't need too many graphics because you can just keep on doing them. When you lose, you can always come back to it. The point of that idea proposal is to show that 'Click Canvas' doesn't need to be static. It's a good first idea, but there's always the potential for more.