Created from the passion of authentic Phuket young bloods, Peranakan Phuket Museum or PPM has been established to preserve and showcase precious memories of the island, which consists of a mix of Thai, Chinese, Malay and European cultures. Unlike conservative museums, PPM offers a more approachable collection that no museum fan should miss.

Peranakan is a Malay word for "born here", which is also the term for mixed Chinese descendants. When a non-local marries a local, their children are called Peranakans, the ancestors of Phuket Peranakan people today.

When you arrive at PPM, the first place that is worth visiting is the Peranakan Phuket Boutique, which offers a wide range of Peranakan influenced fabrics and textiles. Original styles of sarong, kebaya and baba shirts with exquisite patterns alongside delicate beaded shoes and a list of pairing accessories such as kerosang and bin tang [traditional brooches for different occasions], peranakan earrings such as hang hong as well as hua kuan [bridal flower crowns] are available to be added to your fabulous Peranakan collection.

When in Rome, do as Romans do. The next stop is the Baba Studio, which offers Peranakan rental outfits for all ages and sizes for different occasions to take a picture with and walk around the museum like a proper Peranakan. Choose your favourite outfit and let the museum take you back to Phuket town in the olden days.

Entering the first area, you will find a massive map with computer graphic explaining the history of the Chinese Hokkien people, who immigrated to Phuket to work in the tin mine industry during the era of Phraya Ratsadanupradit Mahitsaraphakdi, also known as Khaw Sim Bee Na Ranong.

The long and tough journey through a series of thunderstorms killed a number of the Chinese workers on their way to Phuket, while the lucky survivors caught the Phuket dream and started a new chapter of their lives.

You will find that the ancient Sino Portuguese houses you might have seen in Phuket old town, in some of the provinces around there, or even in Penang and Singapore. They turn up during many historical phases including the early architecture phase of Phuket, which features a simple design and patterns. 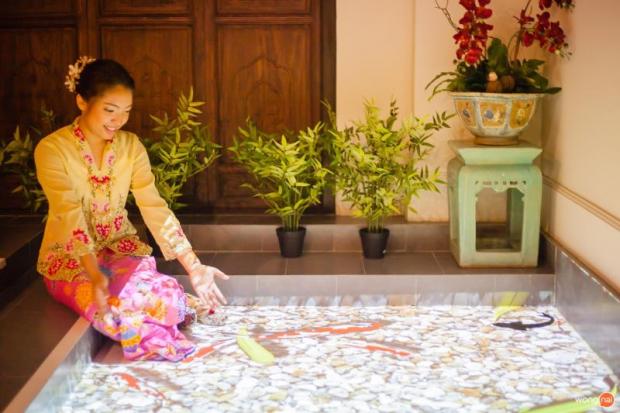 Entering the front of the house where the door opens onto the area's charming history, you will learn many interesting details from the covered pathway Ngo Ka Ki [meaning five-foot pathway] that lies along the row of houses.

The Chinese-style wooden doors of the houses have a manual lock and double protection designed to suit people's lifestyles back then. A neatly crafted vent in front of each house allows the wind to blow through the long avenue.

Wandering about with your baba dress inside the house, you will notice the antique Chinese mother-of-pearl inlay in the rosewood furnishings.

The living room is next to the signature prayer table, also known as tua.

The prayer table is decorated with beautiful flowers and contains items which are dedicated to the spirits such as oranges, joss sticks and candles.

Right behind the prayer table, there is a wooden partition carved in a Chinese pattern which people can look through. 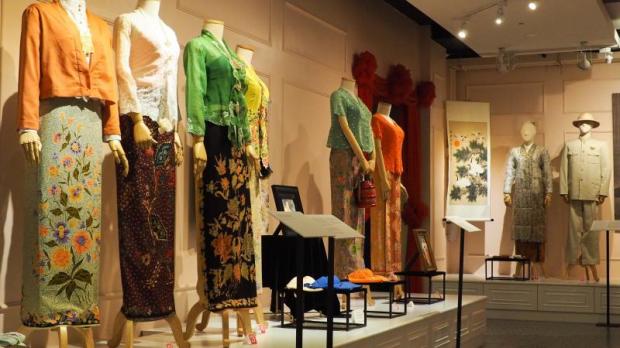 According to the custom back then, young women who are not yet married are usually not allowed to date. Their suitors are only allowed to enter the living room area where the young woman can observe them from behind the partition. Eum lang, a respectable woman in the area, is the matchmaker who will later visit the woman's parents.

Walking deeper into the house where only close friends and family are allowed, you will find an area called chim jae in the middle of the house allowing the sun to shine through and help ventilate the place. A well built in this spot collects rainwater for washing.

A dining table with some authentic local snacks is placed right before the traditional kitchen with ancient tools such as a manual coconut grater, mill, mortar, dishes, spoons, tiffin carriers and even a food cupboard. The tools have been handed down from generation to generation.

After the dining section, you will find the sweet bedroom decor of the newly-weds. The glossy dressing table at one corner of the room has been passed on for three generations before arriving here. The canopy bed in another corner of the room is where the parents and eum lang send the young couple at the end of the wedding ceremony. A rooster and a hen are placed in a basket under the marital bed. The next morning, the birds are let out and the first one to come out would foretell the gender of the first born.

The gallery room of the neighbouring bedroom features rare and valuable photographs from the past including Phuket landscapes.

Opposite the house is a gold shop section. The Sin Yoo Chang gold shop owned by the Suwannakarn family has been around for more than 70 years. The working stations are still lively and you can sense how much hard work each of the tools has been through. In olden times, the wealthy families of Phuket usually hired an in-house goldsmith to create accessories for family members. The next room is the Botan Room, a collection of Peranakan costumes, where you can see the development of shirts and sarong in each period of time.

Once you have sampled the precious and beautiful history of Phuket Peranakan, you may think about taking a souvenir home. The exquisite collection of Peranakan gold accessories is available at the end of your walk, where you can find the finest, most authentic designs that perfectly match your baba dress or even your daily costumes. Wrapping up the visit with a quick bite to eat, try Yaya Kitchen, which serves renowned local food such as mu mong [melt-in-the-mouth braised pork belly], nam prik goong sieb [chili paste with dried crispy shrimp], gian tod [Phuket style deep-fried sausages made of pork and prawns].

Try Peranakan Phuket Museum and get lost in the charming wonder of Phuket history and you will fall in love with this pearl of the Andaman even more! The passing of a great

Pamper mum with a Chiva-Som retreat

Place a bid on rare antiques