Keeping a tradition alive, from the outside in
Life
Social & Lifestyle

Keeping a tradition alive, from the outside in

The roar of engines fills the air as a steady stream of cars zoom past Rama I. Sitting on a hotel-bar patio, trying to ignore the noise, is Sayuki, Japan's first Caucasian geisha. In Bangkok briefly on her way to Italy, Sayuki, originally Fiona Graham, talked to us about her education, her previous work as a documentary filmmaker and her current career as a geisha.

Most importantly we talked about how she's currently running her own house, her attempts to bring innovation and change to the geisha world while balancing the traditional ways of the art-form, and how there was a time not too long ago when she wasn't sure she would ever be able to do any of it.

Originally from Melbourne, Sayuki moved to Japan as an exchange student when she was 15 and stayed there through her first degree at Keio University in Tokyo, where she studied human sciences. She then moved to Oxford University, where she obtained an MBA before switching to anthropology for her PhD.

"Anthropology is the study of humans and societies," says Sayuki. "Being someone who was immersed in a new culture from an early age, I think [anthropology] really suited me well to be able to study different cultures from the inside."

Sayuki returned to Japan, where she found work as a journalist. After working for the national wire service and Reuters, Sayuki got a chance to get an inside look at the very secretive and conservative geisha culture, while working as a documentary filmmaker. 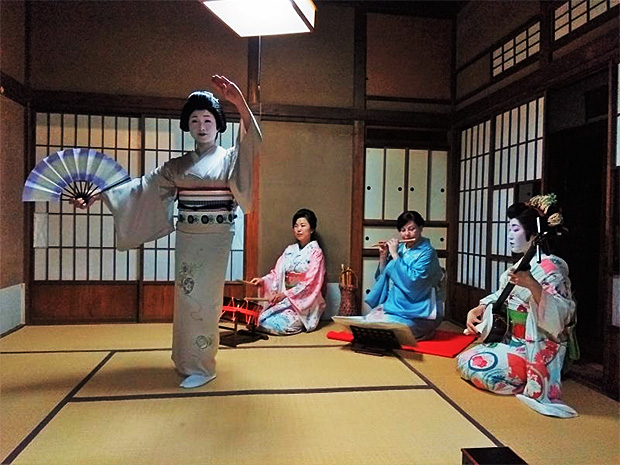 The initial idea was to find a house to let her train as a geisha, and document what it was like inside, but she quickly realised it was almost impossible to make a documentary as a geisha trainee.

"Being a trainee geisha is like joining the army," says Sayuki. "I couldn't ask any questions of my older sisters, or ask them to do anything. I had no choice but to wait to make the documentary later."

Sayuki debuted as a geisha for the first time in 2007, just 11 months after beginning her training, and has been working and performing ever since. However, she says she would still like to get back to that documentary one day, only now the focus would have to change to the revival of her geisha district, Fukagawa, instead of the training side of things.

Sayuki wasn't always in the Fukagawa district, though. She started in the Asakusa district, and four years into her time as a geisha Sayuki faced the biggest challenge of her young career. Sayuki's geisha mother fell ill and wasn't able to keep the house open any longer, leaving her without a place to live and work.

"Normally, having been a geisha for four years, I should have been able to run the house myself," says Sayuki. "But the [Asakusa] district decided no foreigner could be a geisha mother."

Sayuki calls that setback "one blip that happened six years ago". And without that blip, she probably wouldn't have ended up being a geisha mother in Japan's oldest geisha district just a few years later.

Fukagawa had been in decline for many years, but by opening up her house there, Sayuki has been a significant contributor to the growth and revitalisation of the district.

"It is a lot of hard work to revive something, like the geisha world, that's been in decline for 100 years," says Sayuki. "But I persevered, and Fukagawa is now flourishing because of that."

Despite the challenges and hard work it took to revive Fukagawa, Sayuki has also found success in finding innovative ways to bring in income without giving up the traditional aspects of the culture.

"It's hard for a traditional society to innovate. If you change too much, it's no longer traditional; if you change nothing, it will die," says Sayuki. "But it's great to find new ways to be able to help this beautiful world survive."

One of the new ways she's helping the geisha world survive is through use of the internet. Usually, geishas don't travel abroad to perform, but thanks to the use of her website, sayuki.net, a museum in Rome was able to hire Sayuki and two of her understudies, Asaka and Tazusa, to perform as a living display in the museum's geisha exhibit.

On top of booking events, Sayuki has also set up a Patreon page (patreon.com/geisha) where people can pledge money to help support the young geishas. Their sponsors include people from all over the world, including those they have performed for as well as those who are merely fans of geishas and want to see the culture survive.

"It's amazing to think of the power of the internet," says Sayuki. "We have people all over the world who are supporting our young geishas monthly."

Traditionally, it's taken a long time for a geisha to train enough to be ready to perform at events. Because of the hours per day dedicated to practice and the traditional kimonos that cost upwards of US$10,000 (326,000 baht), becoming a geisha used to come with a great deal of debt.

But in Sayuki's house, she gets her girls working and making money as fast as possible in an attempt to avoid that debt. This has made the idea of becoming a geisha much more intriguing and possible for young girls like Asaka and Tazusa, who are examples of a new generation dedicated to keeping the geisha culture alive and thriving.

Because of the opening of Sayuki's house in Fukagawa, many of the older geishas in the community now have the opportunity to pass down their knowledge to the young trainees, which is something they never had a chance to do when they were working in the district years earlier.

"[It's] really moving to see the older geishas coming out and passing down skills, knowledge and traditions to the young ones who want to keep the traditions alive," says Sayuki. "It's just really amazing to see."

Before the three girls head off in search of street food and a night market, Sayuki shares that she'd love to come back to Bangkok soon, but hopefully to perform some events for Japanese restaurants around the city, instead of just for a two-day layover on their way home from Italy.

Whether or not that happens soon is still up in the air, but one thing that's for sure is, if geisha houses around Japan can keep getting young girls like Asaka and Tazusa interested in the geisha world, then more struggling districts will see growth and revitalisation similar to what Fukagawa has seen.