In light of America's warnings on nam pla, we need to take a closer look at what's in our favourite condiment

The US Food and Drug Administration (FDA) has issued a warning to four Thai fish sauce brands to follow their manufacturing standards more strictly. Once the manufacturers comply, they will be able to export their nam pla to the US as usual.

This warning should act as the catalyst that shakes our own Bureau of Food, the FDA and the Ministry of Public Health out of their slumber. Checking the quality of fish sauce is not just something that needs to be done in the markets that we export to. We must start taking a closer look at the fish sauce being sold in Thailand too. After all, it affects our health.

Fish sauce is ubiquitous in Thailand. It is something that most Thais use every day. There are so many factories and manufacturers around the country, but we don't know how reliable most of them are. Nor do buyers and consumers know the details of the manufacturing process, and whether any chemicals are added. The label on the bottle only tell us the percentage of fish, salt and sugar. This is just surface information. It has been this way for decades.

Before we look into the quality of fish sauce manufacturers, we should first reflect a bit upon how fish sauce is traditionally produced. Thais have been consuming it for hundreds, if not thousands, of years. And originally, it was entirely home-made.

There are two types of fish sauce. The first is made by those who live near a freshwater source like a river or canal. They use pla soi, which is small and easy to break down. It is fermented with salt in a big jar for at least eight months, in a ratio of three parts fish and two parts salt. Once the fish has broken down into liquid, the sauce is filtered out. This is the best quality fish sauce -- what is known as the base. But people don't throw the leftover fish away. They add water and salt and ferment it for another three to four months to get a second-grade fish sauce. It's still salty, but the aroma is not as pleasant as the base. 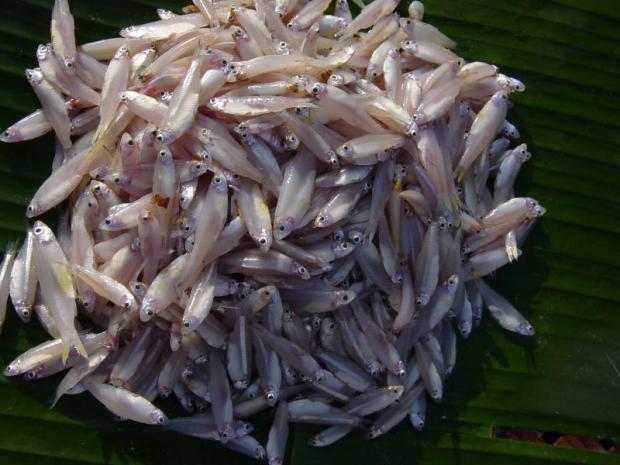 Pla soi is used by those living near freshwater sources as an ingredient for fish sauce. Suthon Sukphisit

The second type of fish sauce is the one that is most widespread. It is made by those living near the sea, using pla kratak which, again, is small and easy to break down. The ratio employed and time taken for fermentation is the same as with freshwater fish sauce.

People use fish sauce differently. If it's good quality, they use it sparingly as a dipping sauce or in nam pla prik, to be consumed directly with food only. Lower-grade fish sauce is used during the cooking process.

Not every family would have been able to make their own fish sauce. So someone in the community would have begun making fish sauce to sell to others, setting up a local business in the process. Sadly, these small family businesses have all but died out.

So when it comes to the large fish sauce manufacturing industry today, it's understandable that one might be suspicious about the processes being used. Now, sauce is mass-produced on a daily basis and sent to supermarkets, fresh markets and convenience stores up and down the country. With fish sauce requiring at least eight months to ferment, each factory would need to have a great number of fermentation pits, producing in cycles. The size of the factory would have to exceed that of 10 football fields. And what fish are they using? There's barely any saltwater fish like pla kratak left in the Gulf of Thailand.

The price is also suspicious. In the past, family-owned businesses sold their base fish sauce for over 50 baht a bottle. That was 50 years ago. Looking at the fish sauce that is available today from big factories, the most expensive bottles are 30 baht. There are also other strange brands of fish sauce made by no-name factories, unfamiliar to consumers, selling their bottles at 16-20 baht each. Cheap fish sauce is popular among à la carte eateries, street vendors and Isan restaurants. Noodle shops, too, have a bottle of fish sauce on every table. They all use the cheap variety. 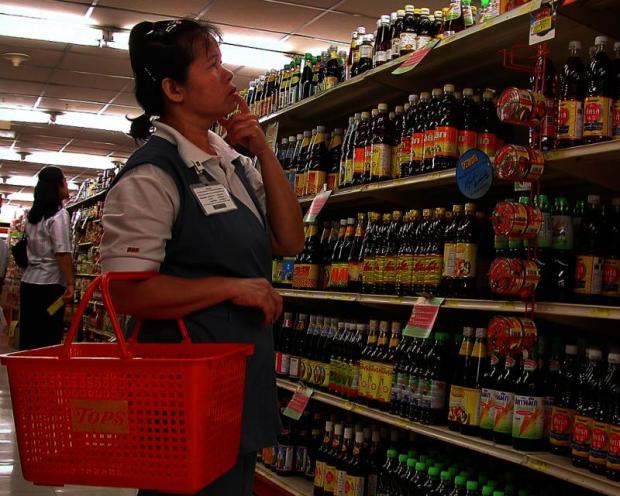 The fish sauce section at a supermarket. BARBARA WALTON

In order to make fish sauce, you have to pay for the fish, salt, sugar, factory operating costs, bottles, marketing fees, distribution, discounts for wholesalers and transportation. If you are selling your product for 16-30 baht a bottle, is it actually fish sauce? If not, what is it? If it's a mixture, what is it being mixed with? Is there any danger to consumers?

It is very curious indeed. The ones who answer these questions aren't going to be the manufacturers. It has to be the Bureau of Food within the Food and Drug Administration. The US FDA has issued a warning on the quality of fish sauce there, even though Americans don't consume very much of it. So what of the fish sauce that is sold in Thailand -- that Thais eat every day? Why isn't the state checking its quality too?