Besides the discussion about how beautiful the Miss Universe 2018 pageant contestants are and who is in the lead ahead of the final round this morning, the ineligible Marie Esther Bangura from Sierra Leone has been one of the hottest topics among fans on social media. 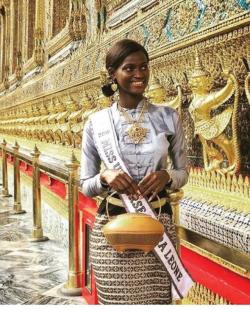 Marie Esther Bangura from Sierra Leone poses for pictures in traditional Thai costumes at the Temple of the Emerald Buddha and Wat Arun.

Ms Bangura was disqualified from the contest as she failed to arrive in Bangkok by Dec 2, but has been allowed by the organisers, TPN 2018 Co, to attend many of the activities.

Thai fans of the pageant, who feel sorry for her plight, have lent her their support by escorting her to visit the Temple of the Emerald Buddha and Wat Arun as well as other Bangkok landmarks.

Facebook user Phimnipha Dechkul posted 22 photos and a video of her and Ms Bangura during their Bangkok tour where Ms Bangura posed for pictures in various Thai dresses provided by Ms Phimnipha.

Ms Phimnipha wrote, "As a homeowner and as a Thai, I am happy to take care of you. And I'm glad to see Thai people like her and support her. She is a very beautiful and very bright woman. I love you."

Ms Bangura caught the attention of fans when it was revealed that it took her two weeks to travel from war-torn Sierra Leone, via Ghana, to apply for a visa at the Royal Thai Embassy in Nigeria, and then take a plane from Ethiopia to Bangkok. She finally arrived with her suitcase on Dec 8.

Ms Bangura told Thai media in a recent interview: "I always wanted to represent my country and that's why I tried so hard to be here. Since I'm not competing, I still feel good because I got to meet people and learn new things. I know everything you go through you learn a lesson, and I've learned a lesson. I've met different people. I feel so much loved and excited."

Starting from 7am at Impact Arena Muang Thong Thani today, the final rounds of the pageant will feature the contestants in swimsuits and nightgowns.

The top five will then go through two rounds of questions before Miss Universe 2018 is crowned.