Something in the water
Life
Social & Lifestyle

Something in the water

Everything you need to know about the betta fish, now officially the national aquatic animal

Rows of small glass containers fill multiple shelves along the wall. Inside them, swimming leisurely and living separately in their tiny, private space are colourful Siamese fighting fish, popular among various crowds. Some keep them as pets for their pure eye-candy pleasure, or get them on a fish spar to make quick cash, or selectively breed them for commercial purposes.

Beautiful, but also highly territorial and aggressive, the Siamese fighting fish has recently been declared Thailand's national aquatic animal. For hundreds of years, the fish -- also known as betta, or pla kut (biting fish) -- has long been part of the local culture and lifestyle.

People have been placing bets on these aquatic fighters as they sparred in widely enjoyed games since the early Rattanakosin period. This is something people gamble on to this day, in hidden back alleys and in rural areas. Today, fish of desirable qualities and standards participate in contests that yield prize money for their owners.

Siam Kerdlap, 44, a technician on an oil rig, said he has been involved with fighting fish since he was young.

"It was typical for boys living in rural areas. Many of us kept fighting fish. I also began breeding them when I was in primary school. Back then, they were not as pretty as commonly found today. They were predominantly used in a fight for money," Siam recalled. 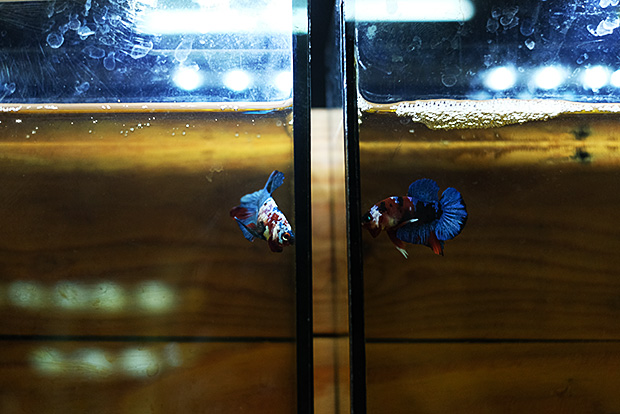 Fighting fish are highly territorial, and are kept in individual tanks to prevent them from attacking one another.

Siam rekindled his childhood passion as an adult, roughly two decades ago, though the attempt has been on and off due to work and family obligations. At one point, he had 1,000 fish.

"I like watching them swimming around, looking pretty in their tank. I don't keep them for fighting anymore, though. Only for pleasure," he said. "My whole family, my son and daughter, all like these fish. We also send our fish to competition, of which we've won a few."

The love for pla kut has been kept alive through generations and, today, it has expanded into a big multinational industry. As a commercial aquatic animal, its popularity has also resulted in continuous efforts from local breeders to develop the species through selective breeding, to attain desirable colours and characteristics, over the years. 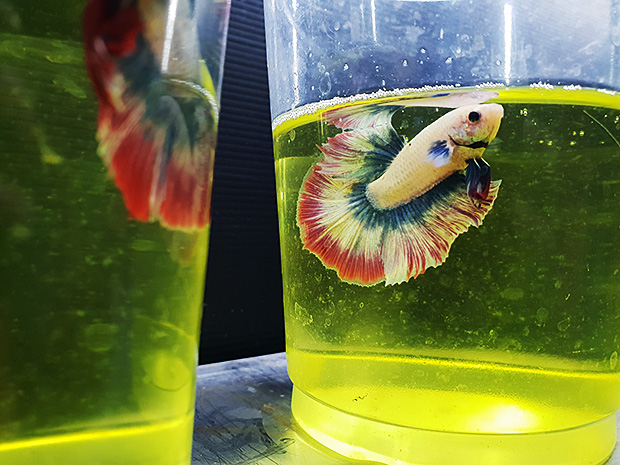 Flag-coloured pla kut is one popular choice of fish.

Chatuchak's weekend animal market is one of the country's largest and best-known places where fighting fish are traded. There, a narrow alley is filled with shops specialising in breeding and selling fancy fighting fish. The small soi is visited by professionals, amateurs and casual couples looking for something to decorate their desks. The shops there sell selectively bred bettas that come in vibrant, elaborate colours with gorgeous fins, quite unlike the more dull fighting fish we may have seen in childhood.

Naturally, pla kut can be found in standing water and in canals, though that is uncommon these days as they are mostly bred in captivity. They are tough, easy to keep and take up little space. Males, especially, can be extremely territorial; each one has to live in a separate tank or they will attack one another. Females can be housed together in a large enough space. Males and females can be kept together temporarily for breeding purposes. They feed on zooplankton, mosquito larvae, brine shrimp, fish food and egg tofu (a good option for owners living in the city). Their lifespan is generally up to two years, according to sellers.

These fish can be classified according to their physical features, such as their fins and scales. Some of the more popular ones are the half-moon (with its tail fin panning out into a "D" shape) and the crown tail (fin rays extend out in the shape of a crown).

In terms of colours and patterns, some of the popular variations now are Nemo and Galaxy. For Nemo, they have a predominantly orange colour, with certain patterns in white and black -- the same colour scheme as Disney's famous clownfish. For Galaxy, they carry a mixture of red, blue, white and black colours on their body. Other variations include koi (with carp-like pattern) and those of plain, solid colour.

"The trend has been fading in and out, and the popularity of certain variations rises and falls all the time," said Suwannee Sangdee, owner of Je An Betta shop and who has been involved in the pla kut business for 11 years.

Suwannee said that this industry has been relatively big from the start, even before these fish were made a national aquatic animal by the government last month.

"The announcement did make the general public a little more interested in these fish. People have been showing some curiosity. But this circle has always been big," she said. 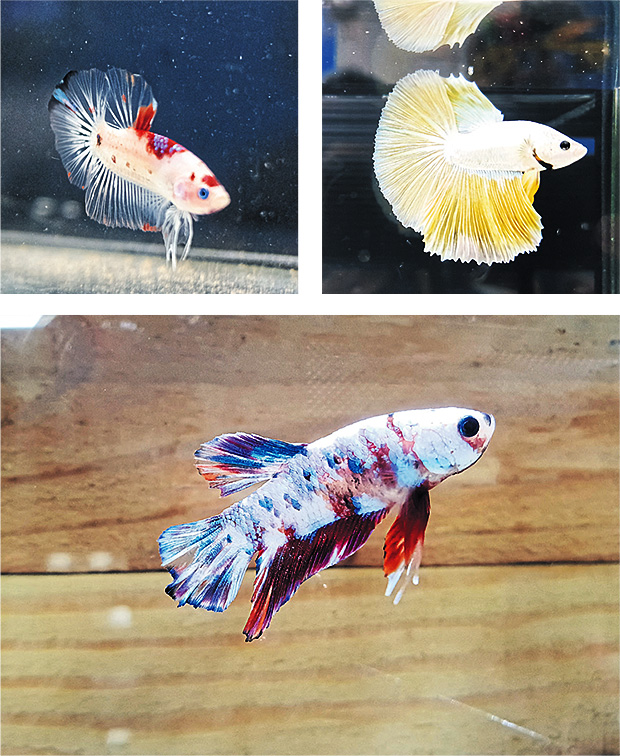 Many varieties are available on the market.

At the same time, despite its "national" status, the species is naturally endemic and is listed as a vulnerable species by the International Union for Conservation of Nature (IUCN). Most of the fighting fish available in the country today are bred and raised in fighting-fish farms in Thailand.

Commercially, fighting fish are popular both locally and abroad. They are the most exported aquatic animal in Thailand, with the amount going over a billion each year, generating billions of baht for Thai breeders. The international interest has been influenced partly by these fish being featured on the official wallpaper of the iPhone 6s back in 2015.

Pricing varies according to form, colour and pattern, with rarity as one important factor. Based on observation, the prices can range from 50 baht for those prepacked fish inside individual plastic bags with water sold along the street, to those in proper shops that can start from 100 baht to thousands each and beyond. Fish that are of top-grade, that fit the desired standardised characteristics, can generate quite a profit for their breeder and owner.

Suwannee, who also ships her fish to international destinations, said her customers are from Singapore, Malaysia, Vietnam, Canada and elsewhere. In one lot, she may ship up to 1,000 fish.

The industry can definitely grow even bigger, she insisted. Even with many existing breeders and sellers, it's not enough to cater to people's varying demands. Fish of all grades and qualities have different markets. Some are bought at wholesale prices and sold individually at higher prices. In Asian countries, people buy high-quality fish they can enter into contests that take place quite regularly. People living in Europe and the US generally keep them as pretty pets. 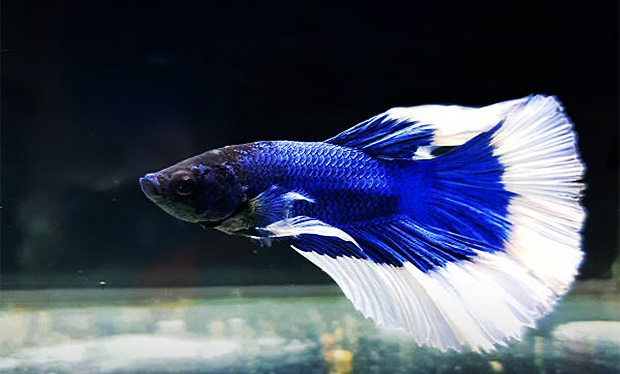 Some places in the Bangkok area that are a hub for fighting-fish shops include Chatuchak Market, Sanam Luang 2 Market and Chatuchak Market 2 in Min Buri. While shopfronts are a popular way customers and those interested can see fish themselves, many also look to online means to get their hands on fish. Sophon Somsri, another fighting-fish shopkeeper in Chatuchak, said Facebook is now where the action is. Certain groups auction fighting fish regularly, even among foreigners, just like any item available on the online market. Pricing can go from as low as a few baht to outrageously high.

Sophon cautioned that those seeking fish online, especially first-time buyers who have yet to find trustworthy sellers, should be aware that photos of the fish may have had their colours adjusted unrealistically. At the same time, even in storefronts, some shops do use different lighting to make the colour more appealing.

"Personally, if I'm going to buy from a shop, I may ask them to turn off the light first, to get a better idea of the fish's colour," he said, adding that shops that like to play tricks on customers usually don't last very long anyway.

"As a seller, we have to be confident in our fish, too. So, a good shop would welcome people to come and look at the fish freely. If people really like it, they will buy it or come back to buy it eventually," said Sophon.

For those who may be interested in getting a pla kut for a pet, Suwannee gave one simple piece of advice: choose what you like. This includes specific colours, tail and other attributes one may desire in a fish. It doesn't have to be what everyone else is having.

"If you love and care for it well, the fish will stay with you for a long time. But if you decide to buy one that you don't particularly like, you'll eventually get bored and neglect it," she said.

Naturally, pla kut can be found in standing water and in canals, though that is uncommon these days as they are mostly bred in captivity. They are tough, easy to keep and take up little space. Males, especially, can be extremely territorial; each one has to live in a separate tank or they will attack one another. Females can be housed together in a large enough space. Males and females can be kept together temporarily for breeding purposes. They feed on zooplankton, mosquito larvae, brine shrimp, fish food and egg tofu (a good option for owners living in the city). Their lifespan is generally up to two years, according to sellers.