In the eye of the beholder

While some urge a total ban, the weight-loss drug phentermine is not without medical benefits. Story: ARUSA PISUTHIPAN

The number 60 on the scale wasn't the only thing that told Vanna* she was fat. Her friends at school said likewise.

"My classmates said I was fat so often I told them one day I would get skinny," recalled Vanna of the moment she decided to purchase weight-loss pills from the internet after reading lots of good reviews. She was in 11th grade back then.

It cost her 350 baht for 12 pills, taking one a day for two months. Losing so many kilos and being satisfied with the results, she quit. Then came the moment of truth.

"After I stopped the pills, I experienced uncontrollable food cravings," said Vanna, now a sophomore at a university in Nakhon Pathom. "I ate all day and ate more than usual. I even brought snacks to class. One day my teacher asked why I was so starved."

That was the yo-yo effect from the drug. She regained lots of weight and ended up fatter than before.

Vanna was still lucky her health was not severely affected by the weight-loss pills. Three years ago, a Singaporean university student was found dead, having overdosed on weight-loss drugs. A probe found the drugs had been purchased and mailed from Thailand. An autopsy found phentermine, an anti-obesity pharmaceutical substance, in her body -- eight times higher than the maximum limit. 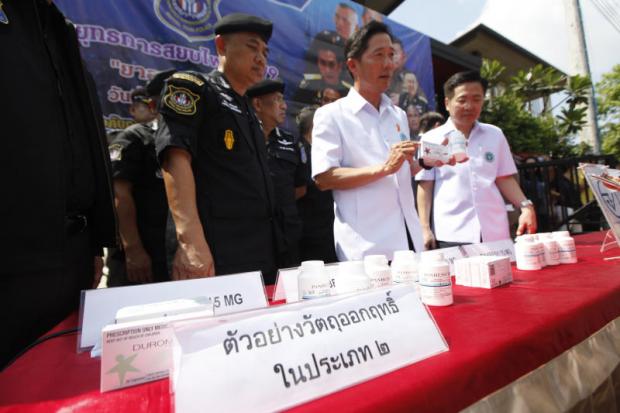 Phentamine, sold under the trade name Panbesy, was among the pharmaceutical substances seized earlier this month by police in Bangkok's Phatthanakan area. Photo: VARUTH HIRUNYATHEB

The authorities have been attempting to put an end to illegal weight-loss pill businesses, leading to the recent raid whereby a gang that produced unlicensed diet pills was arrested in Bangkok's Phatthanakan area earlier this month.

The police found phentermine, a restricted psychostimulant, among other substances. Nine doctors were found to be connected with the business and summoned for investigation.

According to the Food and Drug Administration (FDA)'s regulations, phentermine can be prescribed legally only by licensed healthcare providers. A maximum of 5,000 tablets are allowed to be prescribed per month, and must be used only at the hospitals or clinics that make the prescription. Doctors who prescribe phentermine and sell it to local manufacturers will be found guilty of drug smuggling.

Phentermine is a psychostimulant in a chemical class similar to amphetamines. Used medically as an appetite suppressant, the drug works by stimulating the release of a neurotransmitter called norepinephrine, resulting in faster heart beat, higher blood pressure and more active brain, while the digestive system will work in the opposite direction. Those who take it will feel a reduction in hunger as the appetite is suppressed, potentially leading to constipation.

Asst Prof Dr Daruneewan Warodomwichit, head of the Clinical Nutrition Department under Ramathibodi Hospital's Faculty of Medicine, Mahidol University, said phentermine is one of the two weight-loss drugs approved by the Thai FDA. The other is orlistat, which works by preventing the absorption of fats from diets.

Yet FDA approval doesn't mean the medication can be used freely.

"We cannot blame the drugs here," said Dr Daruneewan. "What matters most is how the drugs are used and those who use them, be they doctors or someone else."

Weight-loss drugs are like two-sided coins and are not for all fat people. According to the clinical nutrition specialist, there are two major indicators for medical practitioners to consider before prescribing weight-loss medication.

"First, weight-loss drugs will be prescribed for people with a body-mass index, or BMI, of over 30. Second, they are for those with a BMI of over 27 who also have obesity-related diseases such as diabetes. However, medication always comes after failure of a few months of behavioural adjustment," she explained.

Phentermine is usually prescribed as a short-term aid to losing weight and used for around three to six months, maximum. With side effects including increased stress, insomnia, dry mouth, constipation, high blood pressure, hyperactivity and palpitations, the medicine must be used under the close supervision of medical experts.

"[Phentermine] should only be prescribed by medical specialists and should by no means be available as diet pills in the general market," said endocrinologist and metabolism specialist Dr Sujitramas Fuangwut. "People in need of the prescription are those with comorbidity, including heart diseases and diabetes. These people require regular medical follow-ups and close supervision, because it could mean their lives."

"Treating obesity is not like treating hypertension," Dr Sujitramas added. "People with high blood pressure will all be prescribed blood-pressure medication. But not all fat people require medication."

From her experience attending a number of obese people, Dr Sujitramas said a person who thinks of him- or herself as fat must first be assessed to see if they really are fat. Then they will be screened for existing obesity-related diseases. Certain illnesses, such as thyroid disorders, diabetes and hormone abnormalities, are a cause of obesity. Sometimes treating those diseases makes obesity go away.

Next, they will be checked for diseases and conditions that could soon manifest as a result of being fat, such as high blood pressure, heart disease, joint pain and snoring. Then treatments can be prescribed that range from workouts to diet control to medication, depending on the severity of obesity risks.

"The mind plays an important role here," said the endocrinologist. "If people get the idea and they can exercise and control their diets at home, then they can lose weight on their own and do not need a doctor's visit. Medication is then not necessary. But people are usually full of excuses."

Despite the availability of the FDA-approved weight-loss drugs in Thailand, the mainstay of tackling obesity is still behavioural change, stressed Dr Daruneewan.

"Medicine is only prescribed as an initiator," she said. "People still need to change their habits. They need to exercise and watch what they eat. There are two phases in the whole weight-loss process. The first three to six months is weight reduction, followed after that by weight maintenance. This second phase is more important. It's the moment of truth."

"Losing weight doesn't just end when people reach the target. In a marathon, athletes reach the finish line and then what? Next time they aim at doing better. The same goes with weight loss. What's more important is how to maintain the weight people want," Dr Sujitramas added.

Weight-loss pills come with various unwanted side effects. But Dr Daruneewan and Dr Sujitramas both agree that there are still cases where the medication is required.

"If the FDA bans them, patients are likely to turn to dietary supplements, which have no scientific evidence or research to back up their efficacy. And for these supplements, patients will probably have to pay more," said Dr Daruneewan.

After all, Dr Sujitramas is of the opinion that there is no such thing as perfection and that people should not be overly obsessed with appearance unless it affects their health.

"This is the age of social media, when people take photos and upload the best shots of themselves. Which means, admittedly, appearance still matters. But beauty is in the eye of the beholder and there is no such thing as perfect beauty. So the definition of beauty is up to social context. Some think chubby is cute. Chinese communities like people according to Chinese physiognomy.

"But regardless of appearance, what's most important is the health. Being a little plump doesn't hurt as long as you do not fall sick."

Now looking at the bitter number on the scale, Vanna couldn't agree more.

"If only I could turn back time, I wouldn't touch those pills."