During her student years in Temora in New South Wales, Helen Masters always thought that her interests lay in economics, but her inquisitiveness instead led her on another path. Her personal observations on how new technologies were changing her hometown eventually landed her a career she has followed to this day. 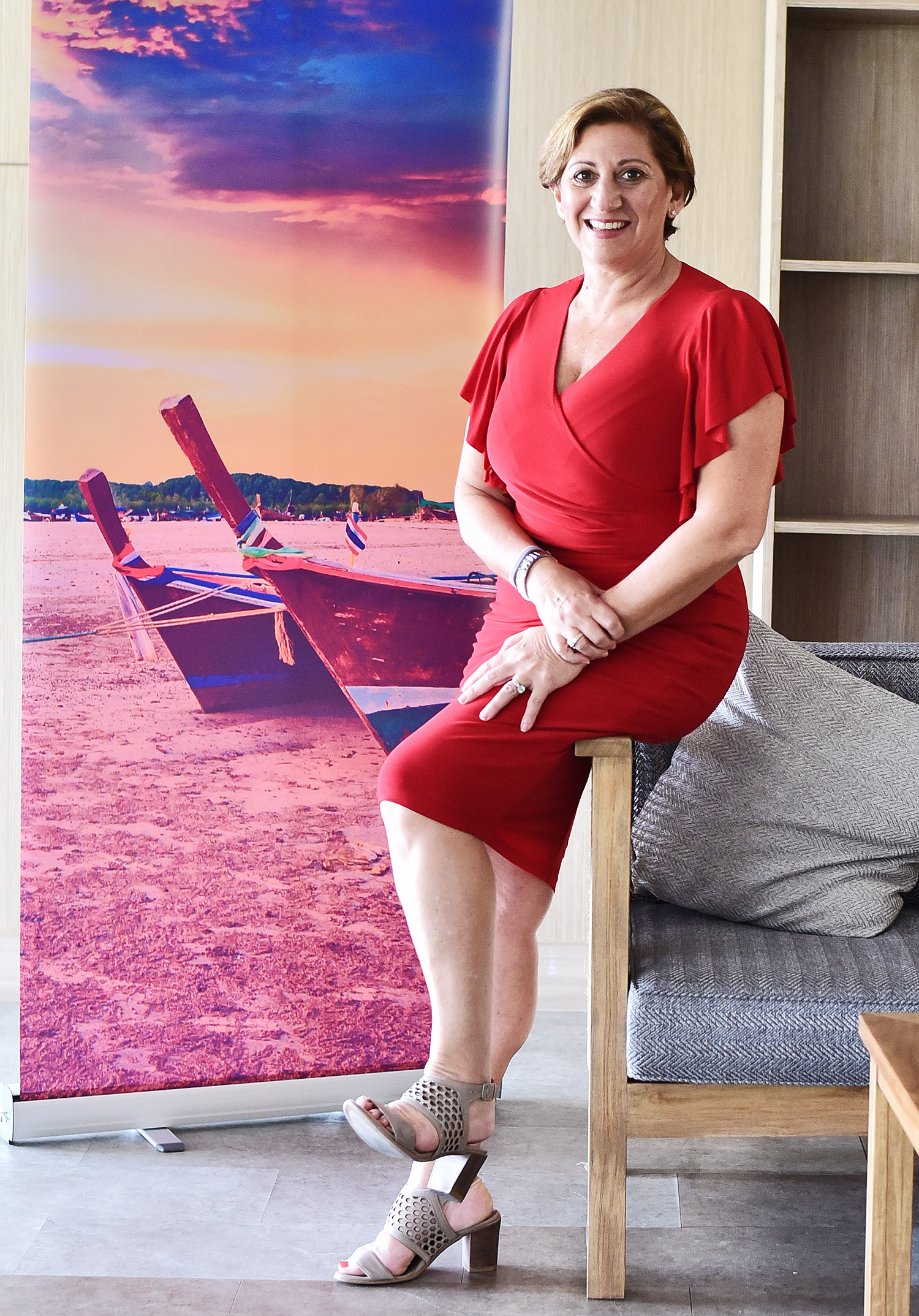 "What was very interesting was watching how technology was interacting with agricultural processes and how farmers used them to measure outcomes and I was thinking, maybe technology is the way to go," she says during an interview with Asia Focus. "There were lots of innovations going on at that time and then all of a sudden, technology became interesting and exciting and economics became boring."

From that moment on, it was all IT, as Ms Masters decided to pursue certification in computer programming apart from her BA in economics from Macquarie University in Sydney. Ever since her graduation, helping others make the most of technology has been the basis for her career, culminating in her current position as head of Asia Pacific for Infor, the world's third largest enterprise technology provider.

"It was just fascinating how quickly it changed over the course of a couple of years and how much it could influence the lives of so many people."

Her first job in IT came just after she graduated in 1983 when she became a branch software manager at a local company. Her hard work and dedication did not go unnoticed, and she moved rapidly up the career ladder, holding managerial positions at five other companies, including 10 years with Computer Associates, until she eventually became the sales director for SAP.

"After I took a 12-month sabbatical in Japan, which was fascinating, I moved back to Australia and joined Business Objects. I was running the sales team there before we were acquired by SAP," she recalls.

At SAP in Australia, Ms Masters was named sales director of the year for 2007, in recognition of initiatives that expanded the sales pipeline by 80%. Success was always followed by more responsibility but she welcomed the challenges, and within less than six years she had risen to a vice-presidential position.

"I love change," she says. "As my career moved on, I'm not a back-room person, I'm very much a front-room person since I love the interaction with people and customers, which has moved me into different parts of the technology industry."

In the VP position, she was responsible for an operation that was generating total revenue of around US$86 million, along with the launch of a data business solutions division that further drove growth.

Even though she enjoyed her role in helping SAP grow and experience "one of their best times" in Australia, Ms Masters decided to leave when her husband was posted to Singapore. That began a whole new journey for her in Southeast Asia. Less than six months after arriving in Singapore she found a position with Cisco Systems, another major multinational technology conglomerate.

At this point in our conversation, I came to realise that being frequently on the move was something that not only defined Ms Masters in terms of her career but in life as well.

"I move house every two years because I like change, which frustrates my family but I like to change things up," she admits with a laugh. "I have lived in Singapore now for seven years and we've moved at least every two years, if not more."

At Cisco, Ms Masters led the Emerging and Transformation Alliance Group where she created high-performance go-to-market models for Asia Pacific, reinvigorated key programs and built regional and country-focused teams to achieve a goal of $1.45 billion in annual revenue.

"That was an exciting period of time as Cisco has just brought a new SaaS (software as a service) product called Meraki, so I was responsible for the business plan to roll that out across Asia Pacific," she says. "Meraki was based in San Francisco with a great team of young people who were working inside a tent in this warehouse, which was just fascinating."

Despite all the satisfaction she gained from her role at Cisco, change beckoned once more, in the form of a tempting offer from Infor in June 2013.

"I got a tap on a shoulder by an ex-colleague from SAP who had joined Infor, wanting me to come and really move the needle for the company in Asean, so I jumped across and helped drive double-digit growth for them in Southeast Asia."

"The easiest way to brand the company immediately is have a top-ten tech IPO of all time, as this would be, and the biggest one in New York. New York wants a big high-tech IPO. It's never had one," he said about the possibility of an initial public offering this year or next.

Since its founding in 2002, Infor has acquired about 40 software companies to help it expand the range of products and services it offers. One of the most notable involved Lawson Software in 2011, helping Infor become a leader in the SaaS field in the US, where it offers 23 CloudSuite products with artificial intelligence and analytics. Between 2017 and 2018, the company launched 176 new products focused on SaaS, or cloud-based computing as most of us know it.

Cloud ERP generally has much lower upfront costs, because computing resources are leased by the month rather than purchased outright and maintained on premises. Cloud ERP also gives companies access to business-critical applications at any time from any location. Compared with traditional systems, Cloud ERP offers a lower cost of investment and shorter deployment time, Mr Philips said. Of the $3 billion Infor earned in 2017, around $500 million was from SaaS business, he said.

Around half of the company's CloudSuite (ERP software purpose-built for selected industries) offerings can be used in many industries and that is the company's advantage. This includes complex industries such as aerospace and financial services, all the way to retail.

Building on AI and know-your-customer (KYC) security capabilities, the company is now adding new vertical features to meet demand and serving different functions of the business, such as human capital management and corporate branches of a company. AI applications in cloud-based industry solutions help automate the business process and provide predictive recommendations through data integrated in supply chains.

Since 2010, Infor has invested more than $3 billion in R&D to drive the transition to cloud technology, including enterprise resource management, customer relations and supply chain management.

If Infor is one of the software giants backstage, Ms Masters must be one of its best representatives on the front stage in Asia. Since joining the company in 2013, she has expanded the business in Asean by 30%, introduced market leading SaaS solutions and built a growing regional organisation by attracting, retaining and motivating new and existing staff. Her achievements include the 2013 Infor HUB award for having revenue growth four quarters in a row.

"We are seeing customers really driving and asking for these cloud solutions and we are the only vendor that can provide industry vertical solutions in the cloud," she says.

Based at the company's regional hub in Singapore, Ms Masters is now responsible for business across Asean, Australia, Greater China, Korea, Japan and New Zealand. Under her supervision, Infor's Asia Pacific business has grown by double digits and it is now the fastest-growing region for the company globally.

"We are taking our cloud strategy across Asia Pacific and it is an exciting time to be at Infor," she says. "We are also seeing different degrees of maturity across the market, where New Zealand is very cloud-mature while Japan is very much jumping into that, and Southeast Asian nations are asking for those (cloud) solutions now, with China getting on board, which is great."

She sees huge demand for cloud solutions coming from food and beverage, automotive and warehousing businesses in the region. Making sure the company can connect with customers and deliver something that really works for them will be the key to growth.

By way of an analogy, a theatre has a busy backstage area where talented specialists perform all kinds of essential tasks, from sewing costumes to repairing lights. The audience doesn't really care what is going on in the back, but this activity is integral to the success of the main stage performance. The front is what people are interested in and it is what they want to buy.

The backstage enables the front stage, so it is where most of the costs come from. If the front stage of a software company is its sales force and the backstage talent consists of software developers, Ms Masters is the maestro orchestrating the entire performance.

"By having business units go off in different directions, we couldn't give customers the love and attention they needed and now, they can blame us at the end of the day if there is problem because the customer is at the centre," she explains.

Apart from customers being the main pillar of the company's universe, engagement of the employees and the company's partners in the region are "absolutely" crucial to Infor's growth.

Infor had global revenue of $3.2 billion in fiscal 2018, up from $3 billion the year before. Revenue from cloud services in Asean, along with Australia and New Zealand, grew by 182% with 6,243 customers in fiscal 2017. But the area still contributed only 10% overall.

"Those three things (customers, employees and partners) are really driving us to continuing double-digit growth and by the end of fiscal 2022, I want to double our business in Asia Pacific, which is the key for me," she says.

It was her husband's relocation that got Ms Masters to Southeast Asia. It was a "tap on the shoulder" that eventually landed her at Infor, and the good news for the company is that if she is talking about a sales goal for 2022, she intends to stay for a while.

"We are seeing huge growth in the healthcare, public sector and commerce areas, especially when governments in Asia Pacific are increasing their spending in all of those areas from factors such as ageing population so all of the money is going into infrastructure at the moment," she observes.

Infor's aim, she concludes, is to invest in more people and increase its number of partnerships, including resellers, to expand business and channels to ensure that Asia's growing appetite for technology is well served.