If there's one type of cuisine Thailand has an abundance of, it's Chinese food. Open up Google and search for eateries serving up any of the traditional Chinese cuisines for your dim sum fix and you'd most likely find one minutes away from you.

However, there is one type of Chinese food we probably almost never find around Bangkok: Chinese-American cuisine. After moving to Bangkok and realising that the city lacked the food he loved back home, owner James Au decided to launch Lazy Panda, a fast food restaurant inviting curious foodies to taste the food he grew up with. James, who comes from a family of restaurant owners in the US, operates the eatery with his parents who train their cooking staff the art of American Chinese delicacies. I went there on its opening day last week to sample their menu.

All of Lazy Panda's meals are served in a big box made of craft paper, no plates are given. James explained that their use of boxes are a modernised version of the Chinese takeout boxes you are so used to seeing in films and TV shows. You can order a combo box which comes with two entrees, or a single box with one entree. All boxes come with a side order of white rice, fried rice or vegetable lo mein, the latter of which costs an additional B30. Coming in with a huge appetite, I decided to pick two from each category which were the recommended items on the list.

It is worth noting that Lazy Panda's portions are HUGE. You get a significant amount of rice/noodles which is more than enough to make you full after finishing one box. While the portions are based off of what you would find in the US, it may prove too much for some and perhaps an option to choose the portion size could be something Lazy Panda could implement later down the line. However, I find that the amount of food you get is actually pretty generous for the price you're paying for. 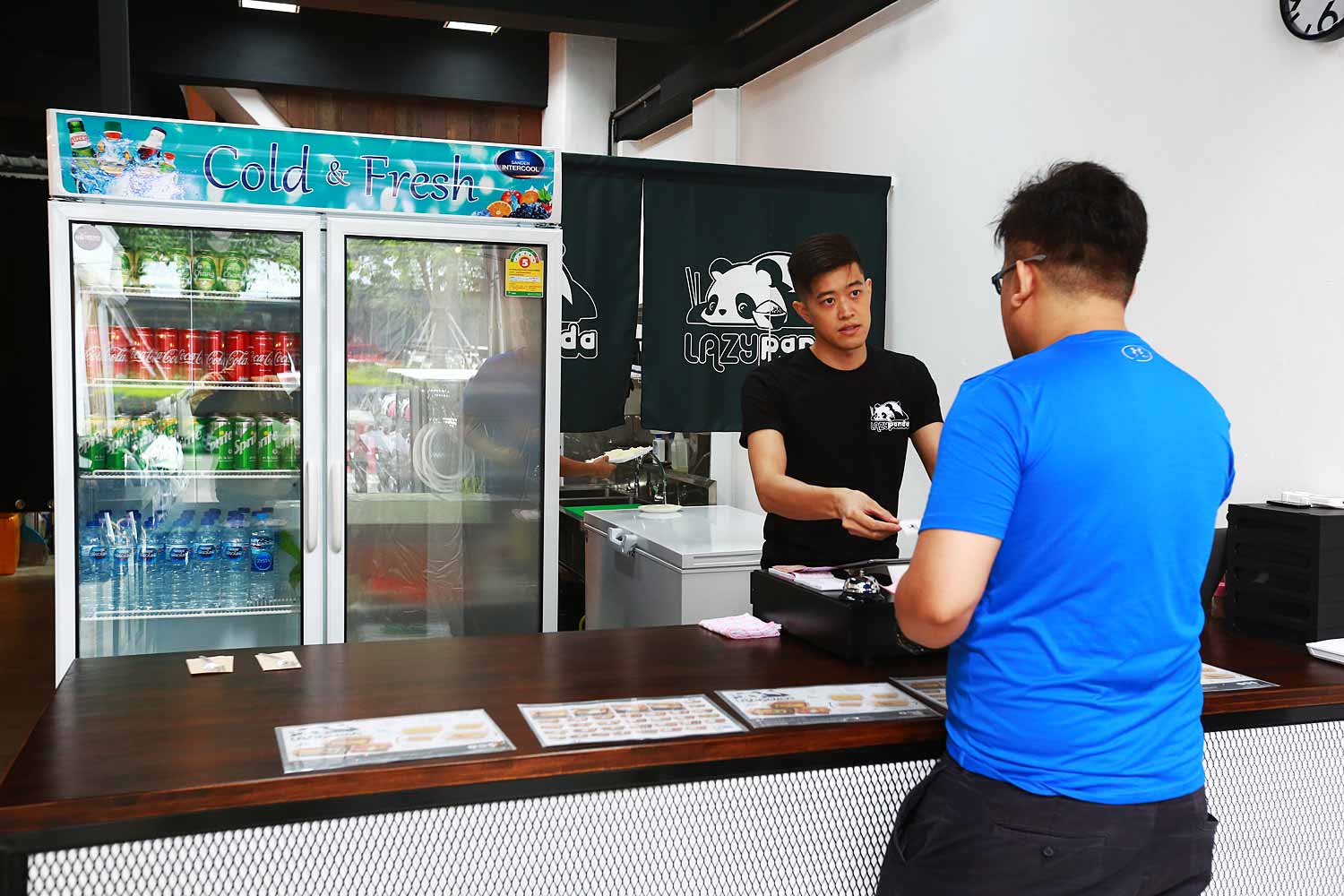 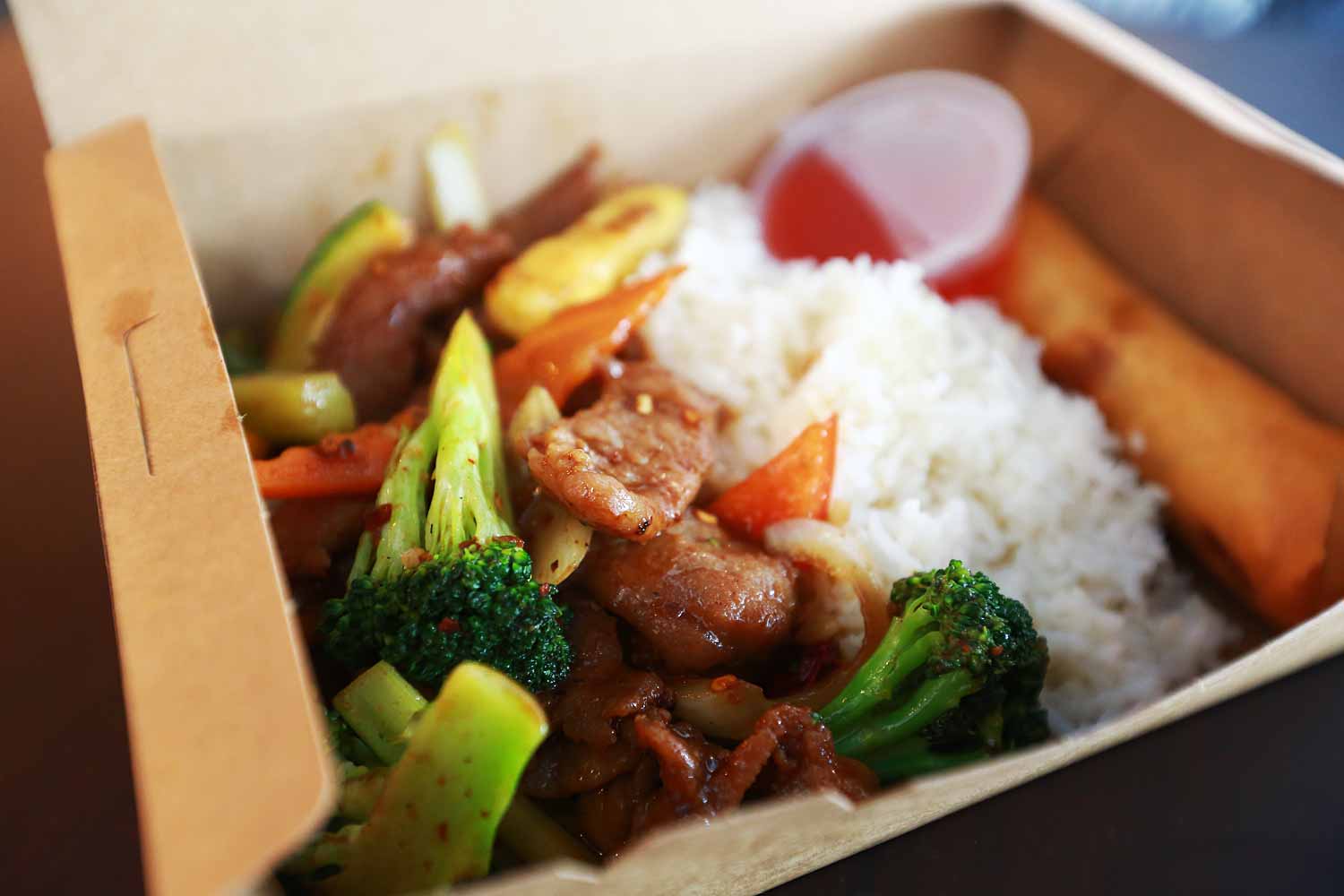 My eyes went straight to General Tao's Chicken & Cheese Puffs (B240) combo box. The chicken, which comes in chunks of deep-fried pieces covered in a thick layer of sweet soy sauce, is crispy and flavourful. When paired with fried rice, it becomes a highly tasty meal that I could understand why it is a staple dish and favourite choice for takeout. The combo box also gives you cheese puffs which are basically fried wontons injected with cream cheese filling. As I am already a sucker for all things cheese, the triangular crisps were a joy to eat.

Up next was the Mandarin Beef & Egg Roll (B220). Stir-fried with vegetables, the beef was what I was expecting it to be -- tender and juicy. What I was not expecting, however, was the size of the egg roll which fit in snugly into the box from one end to the other. The egg roll, while crunchy, tasted like your standard vegetable spring roll you would find elsewhere.

For the single boxes, the Sweet and Sour Chicken (B240) comes in bite-sized pieces for you to dip them into the sweet sauce along with a steady mix of bell peppers and pineapples. When paired with chewy lo mein noodles, which has an nice balance of slightly sweet and savoury itself, makes for an incredible combination of flavours. Looking for something spicy? Then order a box of their Kung Pao Chicken (B200), which could get your tongue sizzled. 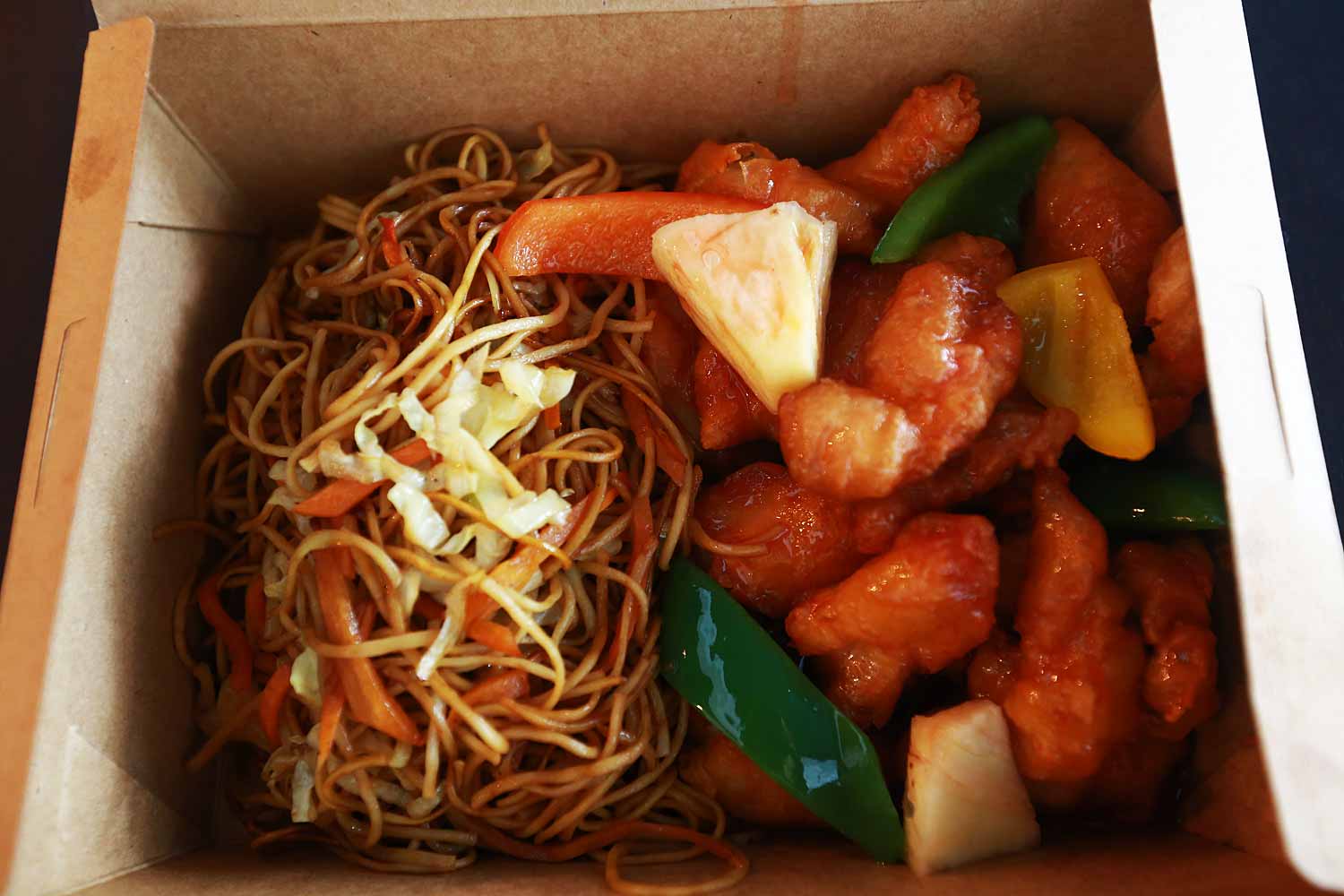 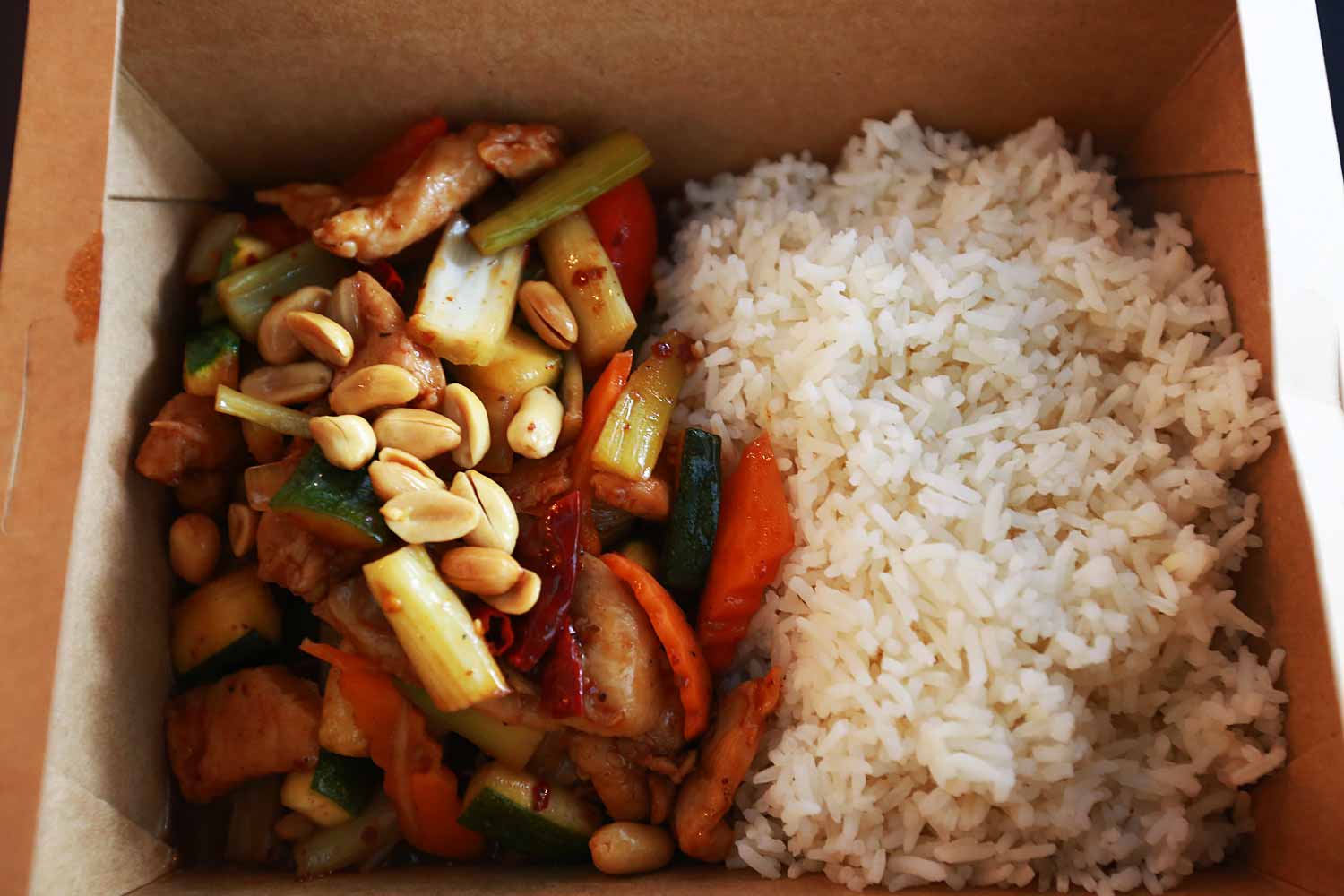 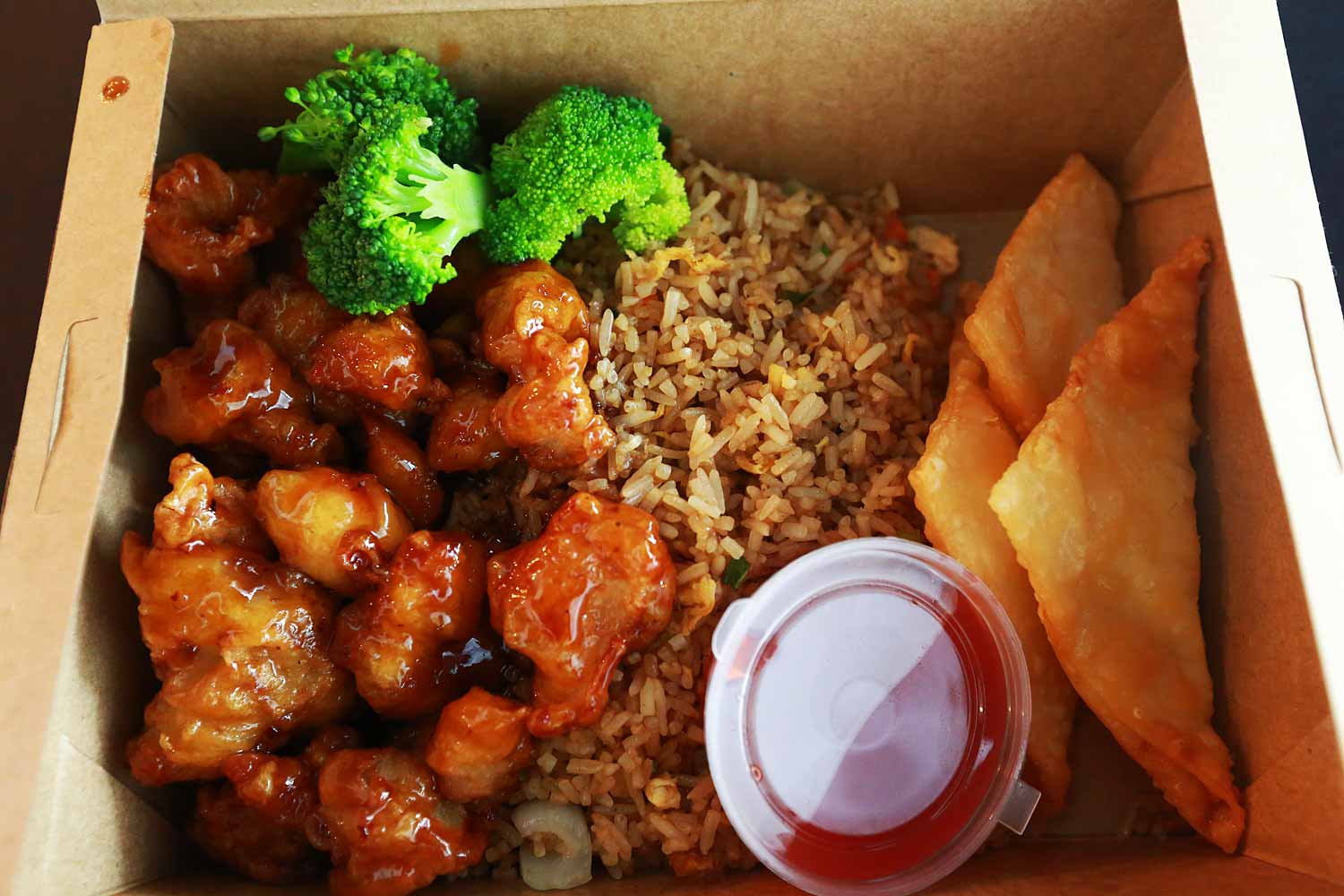 If you're feeling rather lazy like their panda mascot, Lazy Panda is available for delivery through Line Man, and soon enough through Foodpanda. Additionally, they plan to add in a 'full box' option to the menu which is the same as a full box, but without side orders. While the restaurant has just opened, it is missing other staples such as chop suey, egg foo young and moo shu pork. The restaurant plans to add them in as specials in the future, but as of now, that remains to be seen.

I may have only just scratched the surface, but Lazy Panda rolls into Bangkok with a promising start. Its portions may be huge for some, but you'd definitely get more bang for your buck with its sizeable helping of delicious American Chinese food. If you're curious to try a different kind of Chinese food, one that comes from the West, then perhaps you should consider ordering Lazy Panda for takeout. g