When harvested from sugar palm, coconut trees or sugarcane, the otherwise-maligned ingredient endures as a staple of traditional Thai cooking

Sugar is indispensable to Thai cuisine. Granular sugar is widely used in the present day but sugars made from sugar palm or coconut trees or sugarcane are still as suitable for traditional Thai dishes and sweets as ever.

When sugar originated is not known. But there are historical references to kanom krueng thong being made in the mid-Ayutthaya period, in the reign of King Narai during which kanom foi thong was introduced to the Kingdom for the first time by the Portuguese. This suggests that sugar has existed in Thailand for centuries.

A long time ago, massive rice fields were concentrated in the Central Region. Any kinds of trees deemed to obstruct rice-growing were uprooted. Sugar-palm trees were left out due to their tall shape with no troubling branches, because the leaves are clustered around the trunk at the very top while the roots go straight and deep into the ground. Furthermore, palm juice is a raw material for making palm sugar.

Although sugar palms can be found everywhere in the Central Region, most are along the rice fields in Ayutthaya and Pathum Thani. However, the number of households that produce palm sugar has reduced substantially. Sugar palms were destroyed and not replanted, while plots of rice fields have been used for other purposes. 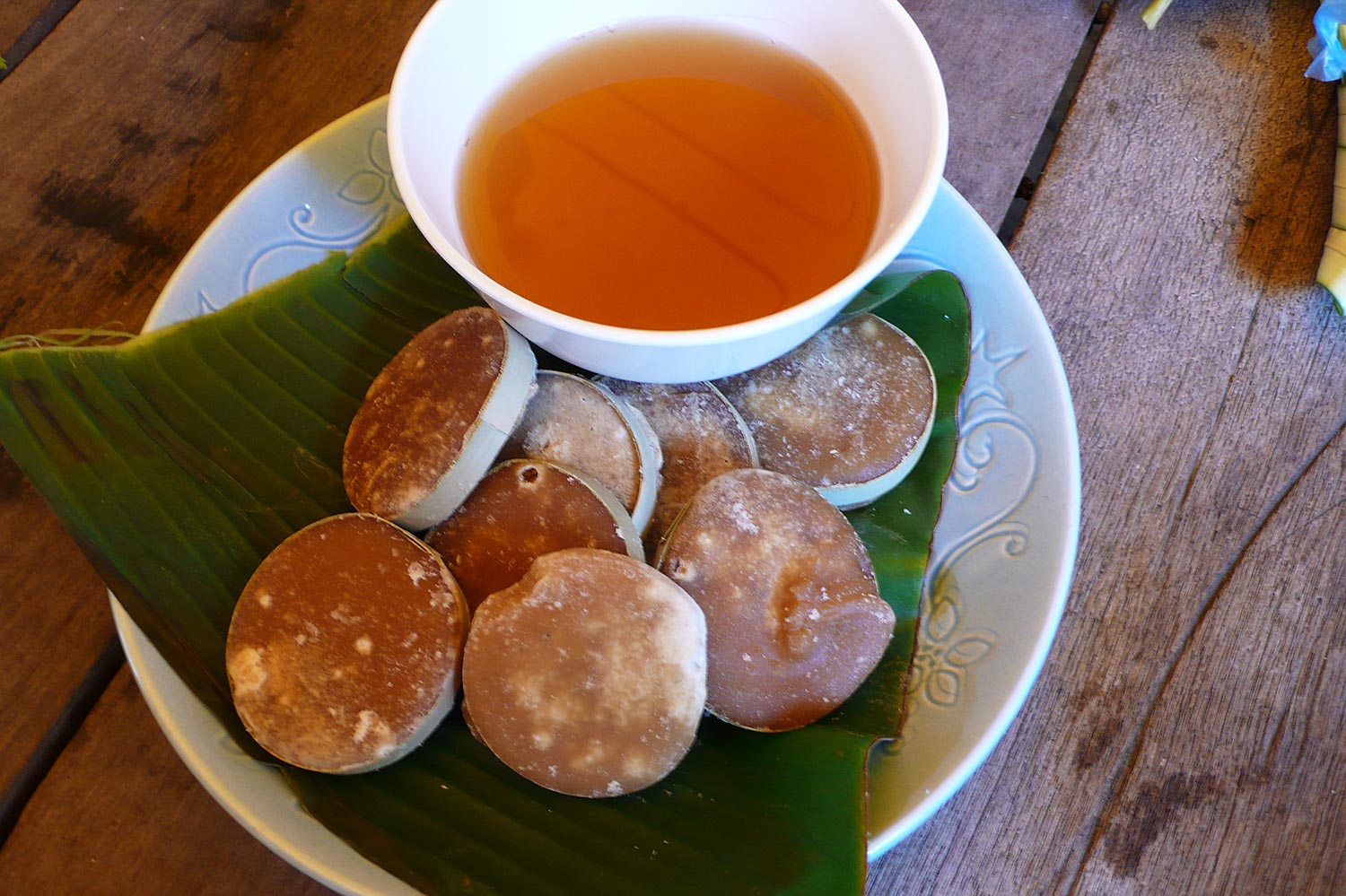 Nowadays, Phetchaburi province has the most sugar-palm trees. Palm sugar from there is well recognised and famous. The number of sugar palms is increasing, as new trees are replanted consistently. Palm sugar is primarily produced by families in Ban Lat district.

Nakhon Si Thammarat and Songkhla also have many sugar-palm trees. The palm sugar made in these two provinces is famous for its unique cube shape.

The next type of sugar identified by the tree is coconut sugar. Coconuts can be found all over Thailand, especially in the southern part of the Central Region, in Prachuap Khiri Khan, and the northern part of the southern region, such as in Chumphon and Surat Thani. Before the tourism boom, the Phangnga islands were full of coconut trees, and the villagers made their living by selling coconuts.

Remarkably, farmers in most places grow coconuts to sell the fruit. But farmers in Samut Songkhram plant coconut trees with the purpose of making coconut sugar. 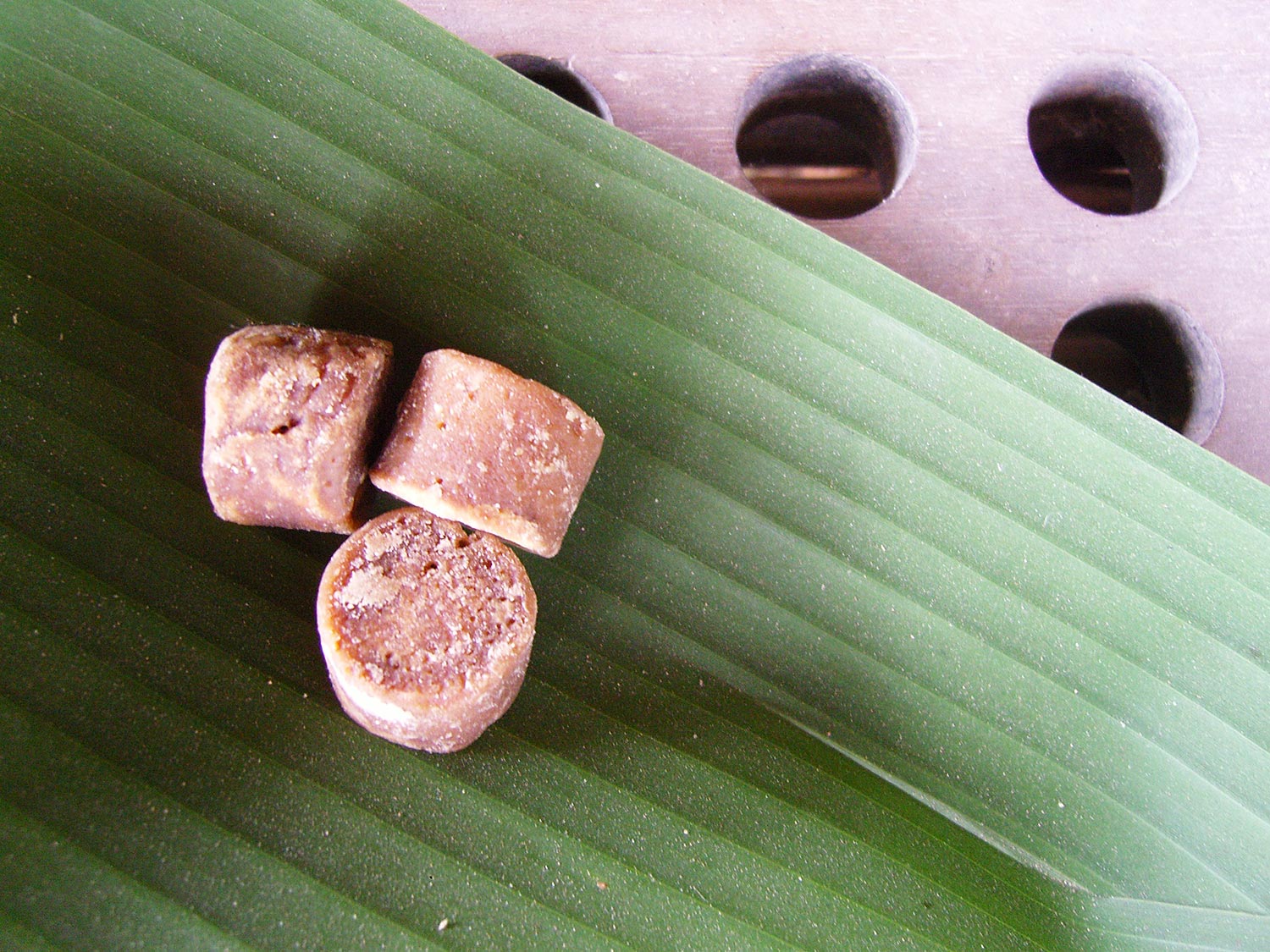 Making palm sugar and coconut sugar is a similar process. First, the farmer climbs up a tree and cuts the flower buds at the top to allow the sap to flow into bamboo tubes. The sap is then boiled until it becomes semi-dry. The paste is poured into bowl-shaped moulds and left to dry. The hardened sugar is called namtan puek. If put into a square metal can, it is called namtan peep. These two types of sugar are produced daily all year round.

To use palm sugar or coconut sugar in the form of namtan puek or namtan peep is entirely up to the preference of individual consumers.

One more type of sugar is made from sugarcane. It is called ngope oy or namtan oy, and is made by villagers in the North and Northeast. The sugar was well known and widely used for a long time by people living in these two regions but was recently superseded by granular sugar.

Ngope oy or namtan oy is no longer widely recognised by the general public. It is harder to find in the market these days. Production is limited, as it is currently produced in only two places: Lao Hai Ngam and Kuchinarai in Kalasin province. The farmers there continue to make cane sugar while still planting rice as their main occupation.

The cane sugar is made only in February, and by March it is almost gone. It is available only once a year for a period of a month. 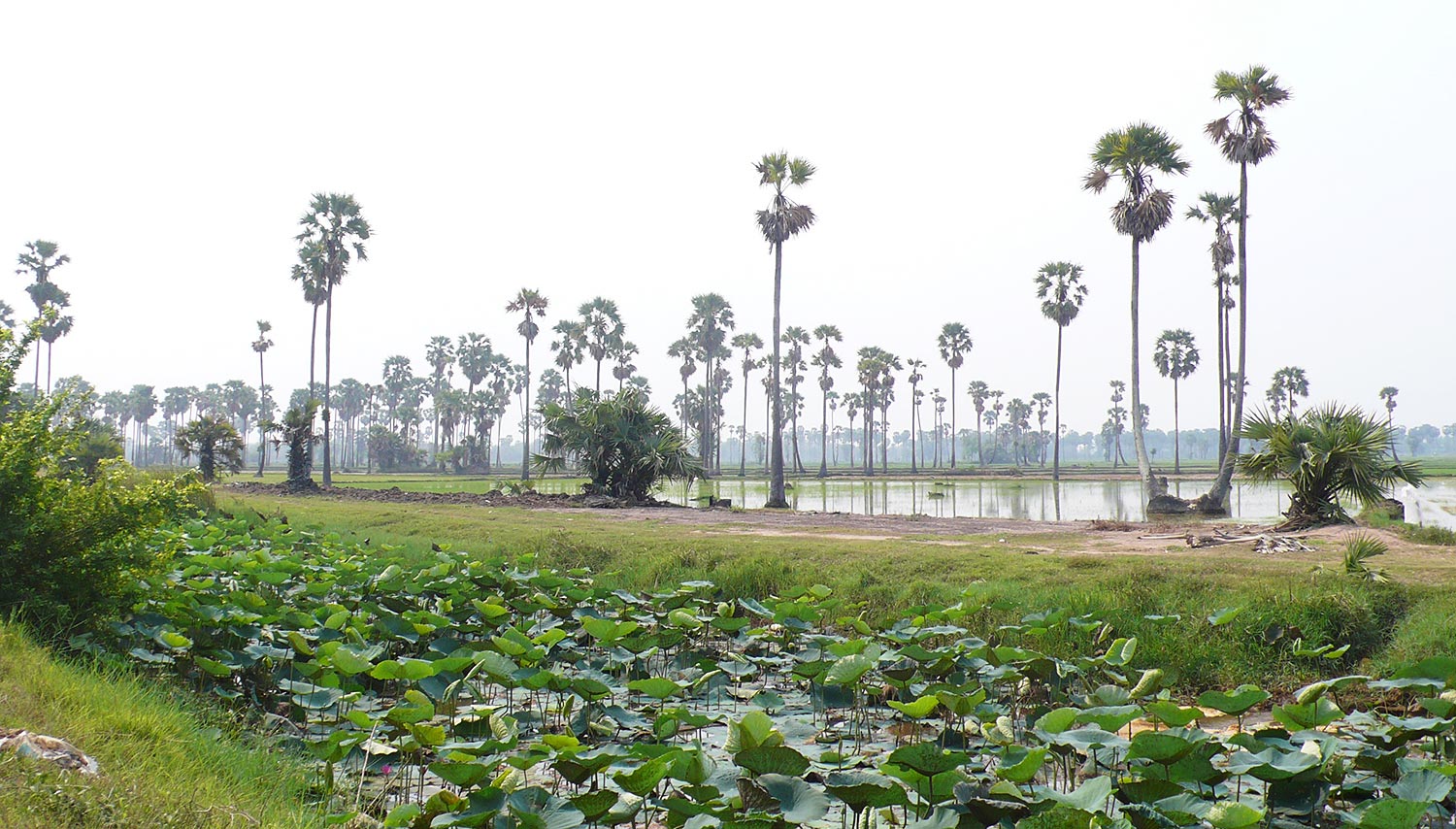 The cane used to make namtan oy is an indigenous type with tall, slender stalks that have to be grown for over eight months before being harvested by year's end. In the past, sugarcane juice was extracted using big, wooden cogwheels turned by a buffalo walking in a circle. Today the wooden press has been replaced by a motor-driven crusher machine. Cane juice is then boiled in a large wok heated by the dried crushed stalks.

When it is almost dry, the hot sugar is poured into the wooden moulds, each of which has over 50 holes cut into it. The soft sugar is extruded through the holes and formed into a round cake. The hardened sugar pellets are then placed in bamboo basket lined with dried sugarcane leaves. The middlemen come to the production sites to buy all the sugar produced each day.

The first buyers then sell sugar to the next middlemen, who live in different provinces. Next step, vendors buy the sugar from the second middlemen and put it into plastic containers and travel to Bangkok to sell to customers.

In the past, most travelling vendors who sold cane sugar had no idea where it came from, as they bought it from the middlemen. But it is no longer a secret in the age of Google.

Traditional sugars made from sugar palm or coconut tree or sugarcane have remained instrumental in Thai cooking. Even though granular sugar is easier to get and the price is cheaper, these sugars are a must in cooking many Thai dishes and desserts to attain the best flavour.