Rungsima Kullapat, a Nakhon Ratchasima native, had seen the contrast of how the historical ruins in her hometown were being developed into tourist destinations, while the local way of life and the architecture on the streets were being overlooked by the state.

The researcher noticed the decades-long tourism patterns, where local and foreign tourists would visit heavily promoted attractions in Muang Korat and the Phimai Historical Park, without really spending time learning about the surrounding communities, especially those in Phimai district.

"It's unfortunate that a tourist bus stops by [at Phimai Historical Park] for 30 minutes and leaves, overlooking the surroundings and missing the opportunity to learn about people who have lived by the ruins and their culture," said Rungsima.

Around 300,000 tourists visit the historical park each year, but not many stay overnight or long enough to see the town outside the park. A number of projects on the Phimai Historical Park have been conducted in the past several years, said Rungsima, but the surrounding communities and people's way of life has been undermined by the government and tourism.

The researcher from the Faculty of Fine Art and Industrial Design, Rajamangala University of Technology Isan in Nakhon Ratchasima, is trying to change the perception towards the local people, with vernadoc, or vernacular documentation. 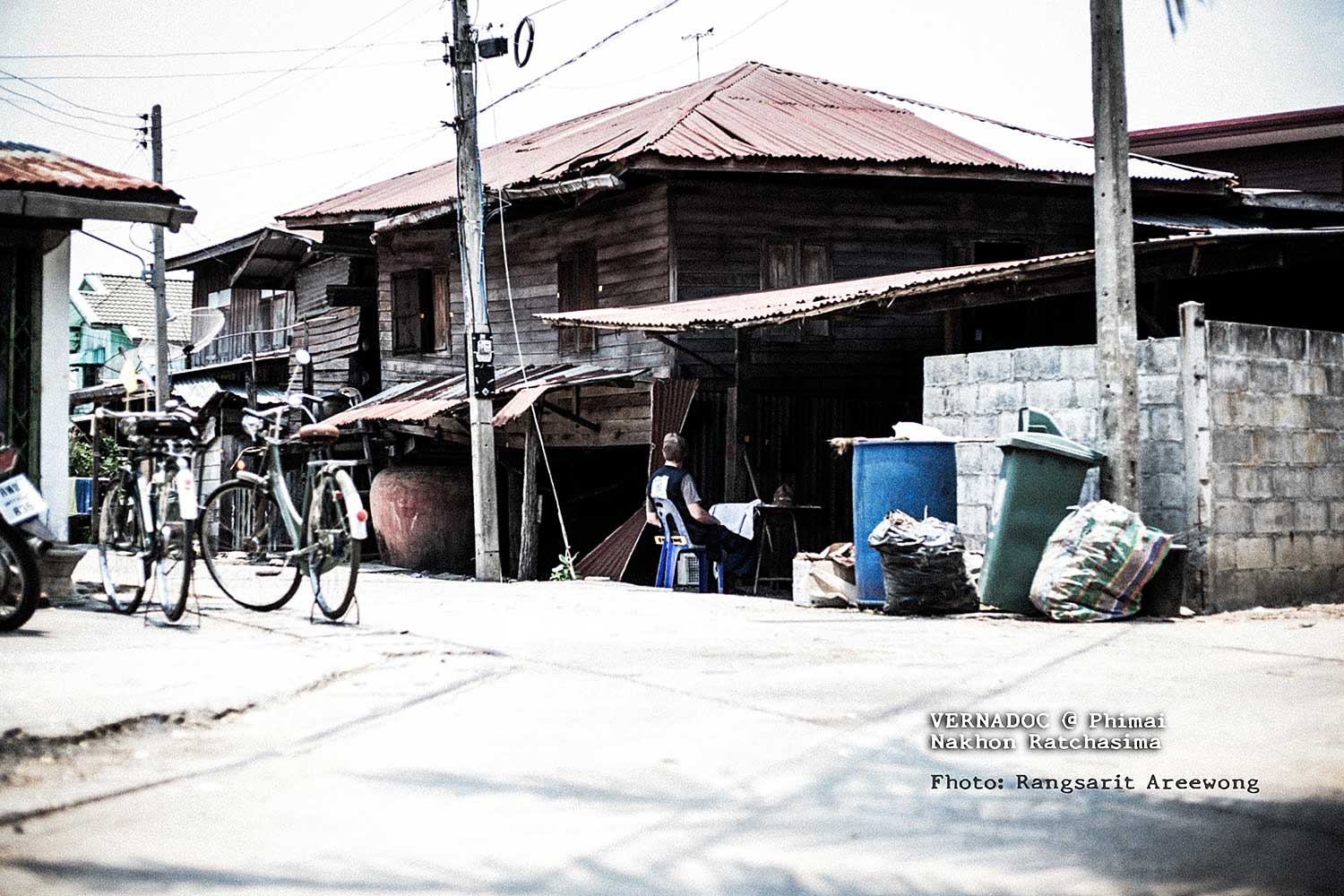 The almost century-old house was chosen for its uniqueness and age.

Vernadoc -- a term coined by Finn architect Markku Mattila for the basic architectural technique to produce high quality works -- is a part of the conservation because the drawings, which document the accurate measurements and architectural details, will remain even though the actual architecture is demolished.

Rungsima's intention was to use vernadoc as a starting spot to encourage the community to be proud of their heritage and search into their own history. From then on, the re-discoveries of their own heritage will be combined into a cultural map of Phimai.

Along with Vernadoc Thailand Group, Rungsima went to Ban Suay Nai, located near the historical park, to document the architectural details of the oldest house in the community in late April. The weeklong camp in Phimai to do the measurement and sketch of the house, and another week in Bangkok to ink the drawings, was also joined by Mattila.

The vernadoc project is a part of the "Revival Of Cultural Heritage In Phimai Old Town By Arts & Culture Motivation To Develop The Community Economics", supported by the Thailand Research Fund, and the project to produce a master plan for conservation and development of Phimai town is supported by the Office of Natural Resources and Environmental Policy and Planning. The project, resulting in four vernadoc drawings exhibited in the village, is expected to inspire building owners or people in the community to perceive the value of their heritage and therefore conserve the architecture.

According to Rungsima's research, Nakhon Ratchasima was an important border town between the Central Region and the Northeast. The significance of the town could be seen in it being one of the military's governing centres, the country's first rail route from Bangkok and site of numerous modern works of architecture.

While Nakhon Ratchasima was a local border town, Phimai was a national border where people travelled between Thailand and Cambodia, where the Khmer temple, or the current Phimai historical park, has marked one end of the ancient Khmer highway from Angkor since the 11th Century.

Despite being an ancient national border and having a stone castle, Phimai, especially the surrounding communities, has always been underrated. Rungsima said people who have lived by the castle are the descendants of those who helped build the town, but they have unfortunately been overlooked, making them unaware of their own significant history.

When their lives are not documented, she pointed out, they don't see the importance of themselves or don't try to search for their own identity. 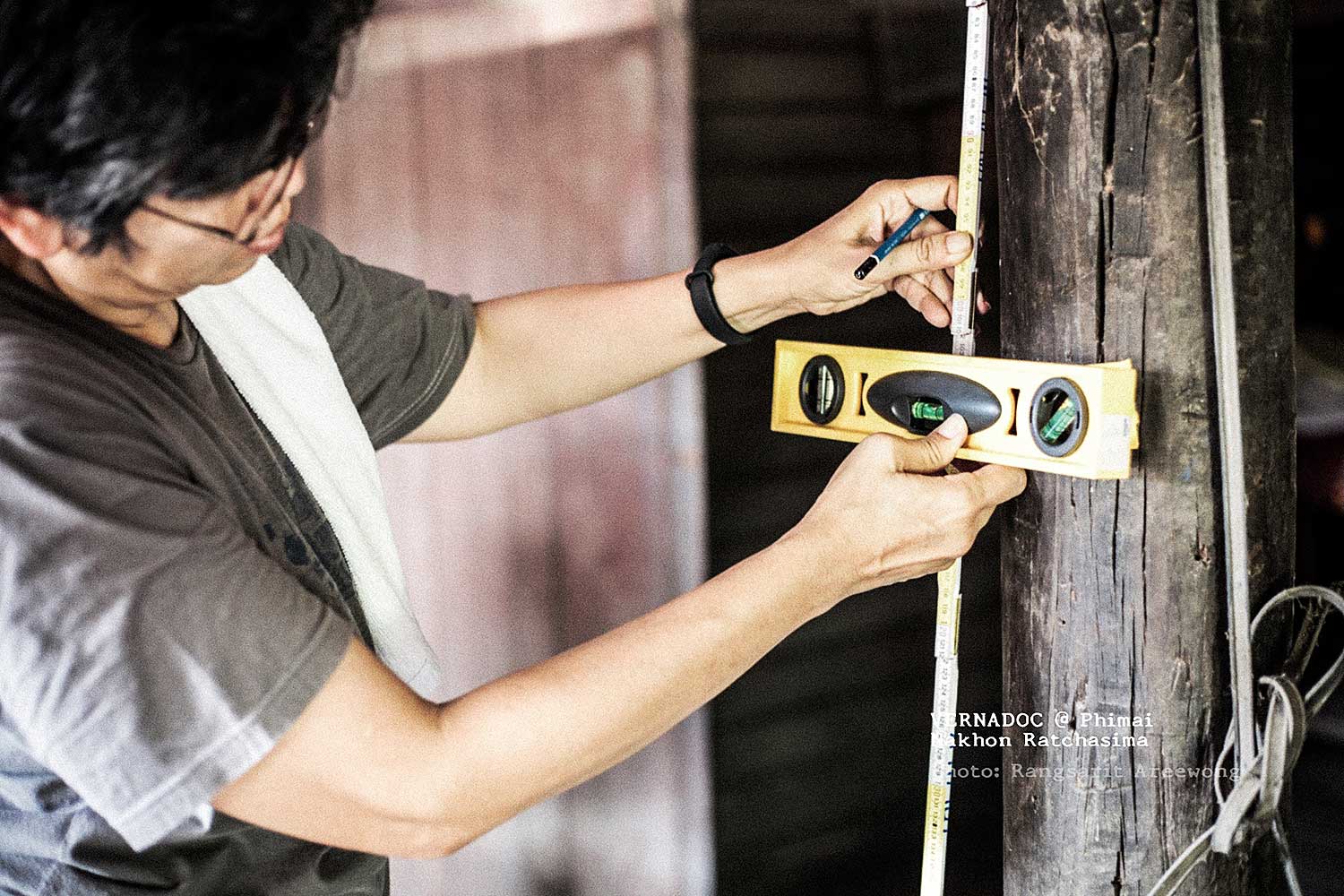 Measuring the structure and sketching is part of the on-site process for vernacular documentation.

Vernadoc, according to the group, aims to make the local residents see their houses and community from other perspectives. Instead of seeing it as a rundown house, beyond renovation, the details of the drawings will make them see the beauty of their architectural heritage. "That will soon make them want to improve the house," said Rungsima. She reasoned that the shabby house was chosen because of its uniqueness and for being the oldest in the community.

People often overlook the significance and uniqueness of what they are familiar with -- in this case, their own culture. If there are outsiders coming into their community who appreciate it, that will change their perspective towards their own culture.

The vernadoc group hopes the drawings will change their mind.

"When there are foreigners coming, their village must be so special that people are coming such a long way from around the world to see their homes," said Mattila.

He cited a trip to Russia in late 1990s when vernadoc successfully became a tool to help conserve old houses. During the trip, he documented an old barn, planned to be demolished by its owner, and gave the drawing to the owner. A few years later, he found when he returned to the village that the barn had been renovated, instead of demolished, because of his drawing that made the owner see its beauty. 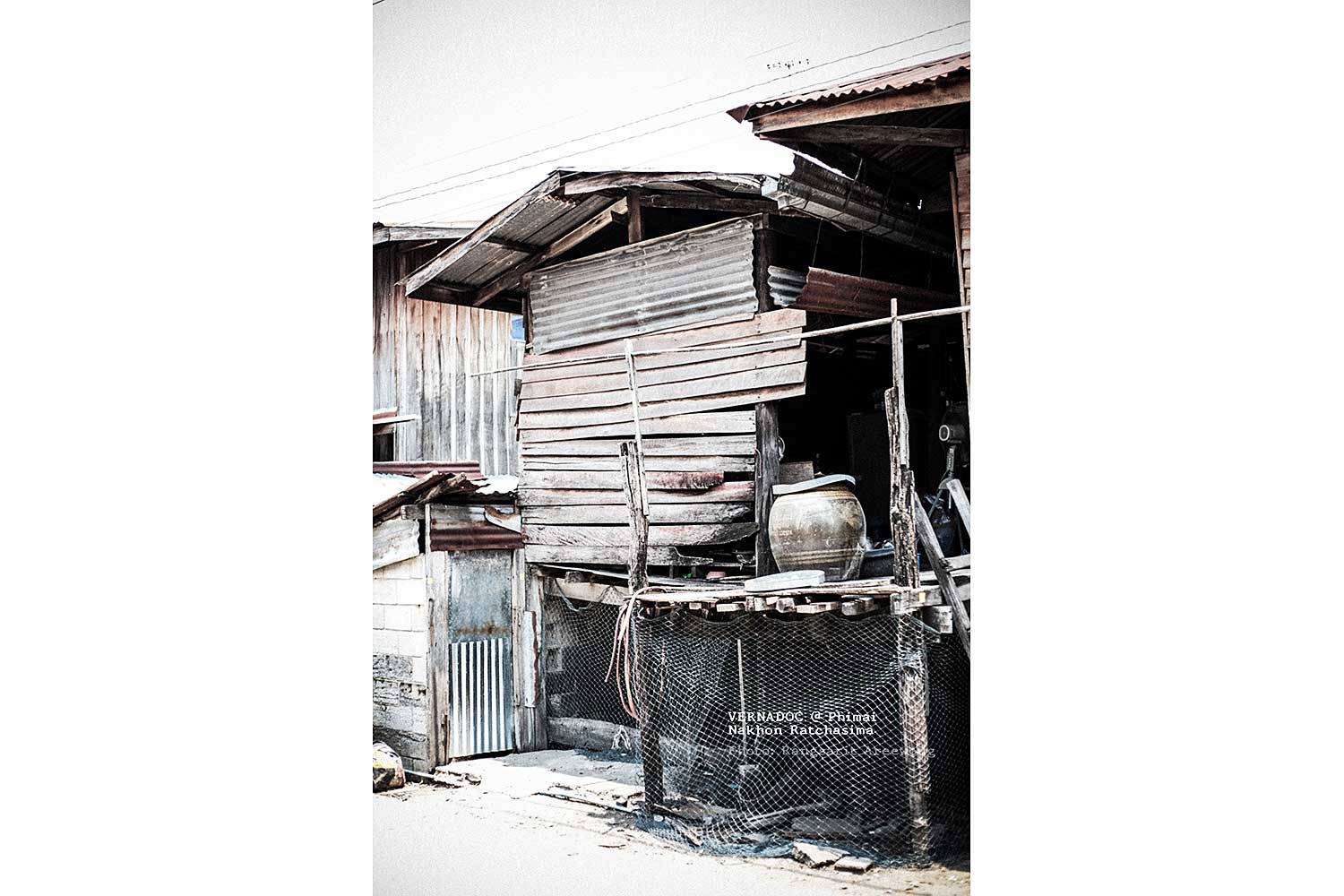 Sudjit Sananwai, head of Vernadoc Thailand, who explained the vernadoc drawings to the house owner, said she could see how Prachum Rua-chai, 83, became so proud of her old, shabby house being used as the vernadoc model.

After seeing the four drawings, Prachum was impressed by the meticulous measurement and details shown in the vernadoc. "It's even more beautiful than the actual house," the old lady said with a broad smile.

Prachum, living in the stilt house for over 70 years until her physical strength didn't allow her to climb the stairs several years ago, was also explaining the function of the house that was once a place to make krayasat (baked rice grains in syrup) when she was shown the drawings.

Prachum is also interested in sharing a part of her house with the community -- as a museum or exhibition space, for example -- if she could still live there.

Both tangible and intangible culture relating to common people has largely been overlooked, said Rungsima, who has returned from the United States where she spent years as a researcher. People's way of life and street architecture have been forgotten. 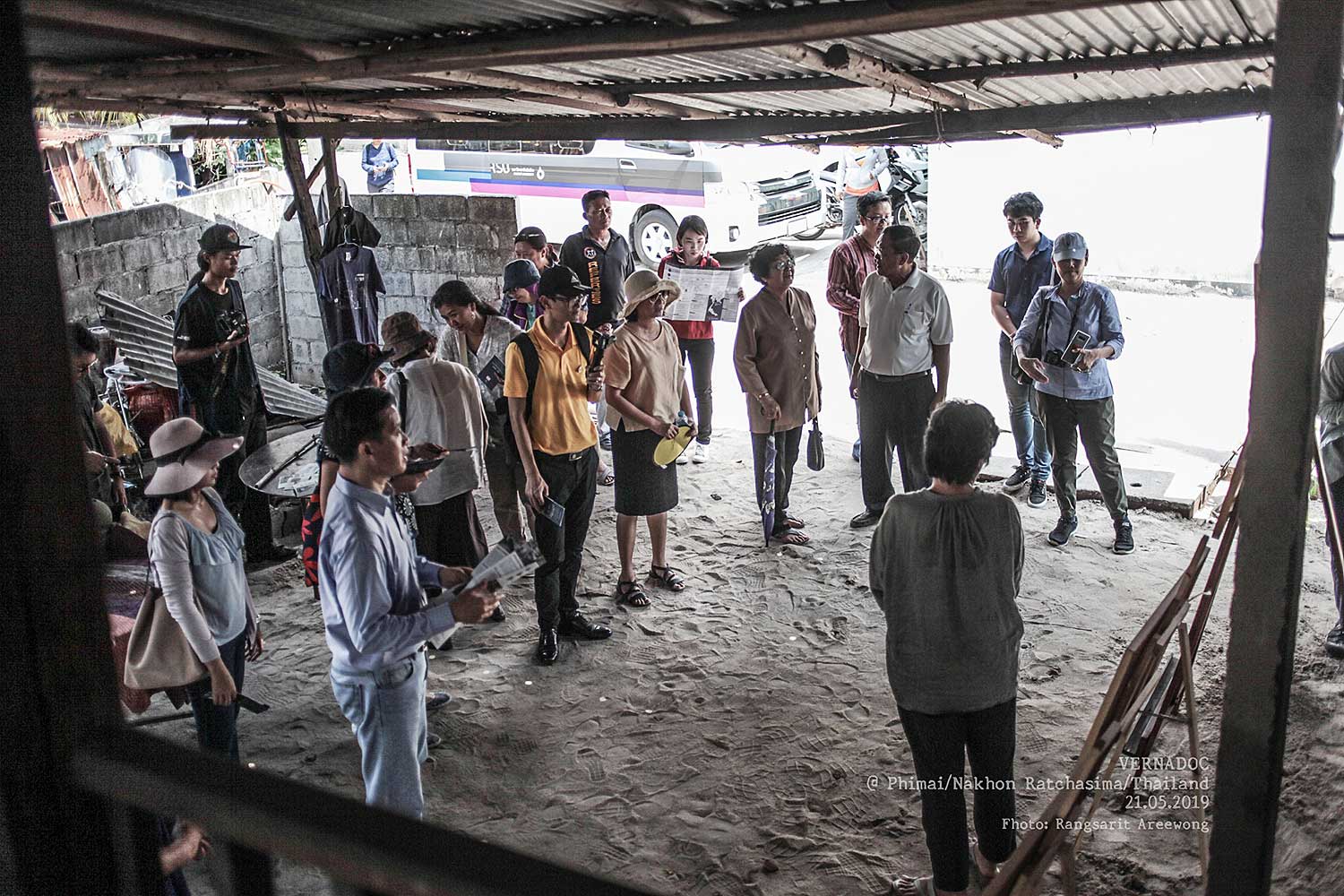 The first group who saw the exhibition at Prachum’s house.

Rungsima cited some disappearing intangible culture such as mee Phimai (Phimai noodles) and mued (vermicelli mixed with herbs). The uniqueness of the Phimai noodle is that its sole ingredient is rice grains and is handmade in families. There used to be a few dozen families making the noodles, but the labour-intensive process has made it impossible for them to make enough money from the cheap product.

Like many local products, it disappeared from the market because local producers, mostly small families, had no idea how to improve the product or add more value to it, to raise the price. From a few dozen, there is only one family of four who spends around 16 hours a day making the noodles at present.

If the vernadoc project is well received, the next step is to include people's way of life and their culture. Once overlooked, it will soon be included, making the new cultural map of Phimai feature more than just the historical park.

Four vernadoc drawings from Ban Suay Nai were first exhibited at Prachum's house at the village in May, and are now part of a Thai vernadoc exhibition to be held in the future.