Continuing our Female Leadership series, Life explores a green local initiative whose aim is to cut the use of plastics

Since she was young, Naruporn Khemthong has helped her mother grow banana plants on their family's plantation in Ban Klong Krachong, Sukhothai's Sawankhalok district.

Today she is also a farmer like her parents and grandparents. They plant bananas not for fruits, but for selling fresh banana leaves for a living. Throughout her life, she's seen the price fluctuate from as low as 5 baht per kilogramme to 25 baht. The prices, like other agricultural farm products, are controlled by middlemen. It inspired in her the idea of adding value to banana leaves. After a few months of trial and error, today she has opened her house as a learning centre for producing banana-leaf plates and bowls.

"My goal is straightforward. I want to create something useful. It will be even better if that thing can help replace the use of styrofoam food containers," said Naruporn, 51.

Ban Klong Krachong is the largest producer of fresh banana leaves in the Kingdom. More than half of the banana plantations, or about 8,300 of the 14,215 rai of banana farms in Sukhothai, are in Ban Klong Krachong. The business generated about 179 million baht for the community last year.

The farmers grow kluay tani (Musa balbisiana), a wild species of banana. People do not eat the banana fruits because the fruit carries seeds. The leaves of kluay tani are needed by the market because of the size, which is larger than other popular banana species, she said. It is also because kluay tani leaves are a little tougher, so people like to use them for wrapping food or snacks and for handicrafts such as for bai si ceremonies.

"When I was young, our community sold sun-dried banana leaves for export to China. They used the leaves for rolling tobacco. However, the practice stopped about 40 years ago when packaged cigarettes were more popular," she said. 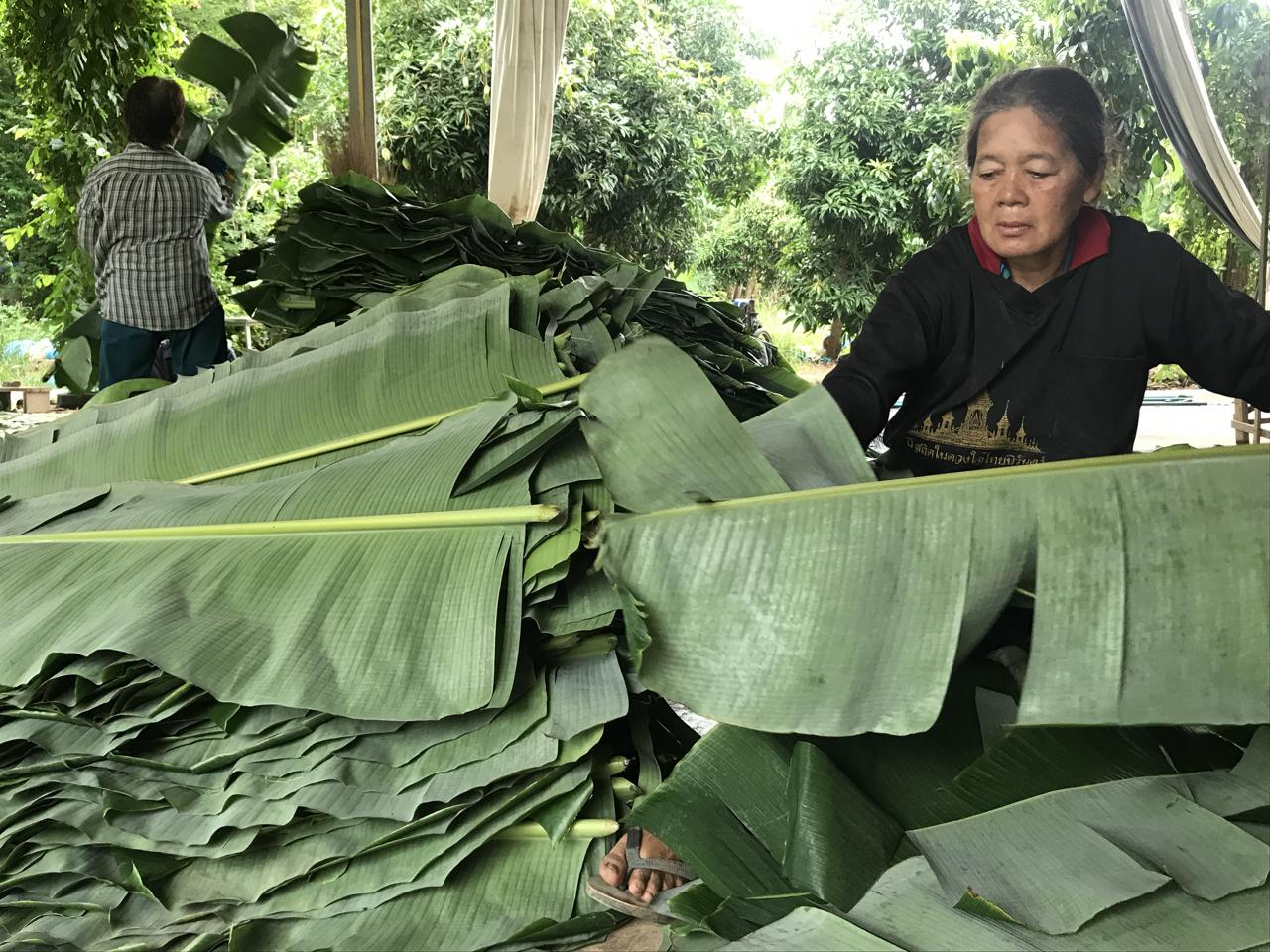 When there was no market for dry leaves, people in the community started selling fresh leaves in local markets as well as in Muang district, about 30km away. Many years later, they expanded the market coverage to Pak Klong Talat, the largest wholesale flower market in Bangkok, and also to Talat Si Mum Mueang in Rangsit, and to Khon Kaen in the Northeast.

When business boomed, farmers expanded their plantations. Sometimes, supply was higher than demand; then the price dropped.

"In the past, we did not join hands together to set up prices. The prices were set by the middlemen," she said.

Two years ago, Naruporn had an idea to produce plates from banana leaves. She sought advice from Pakhom Prachamwong, a village head of Ban Klong Krachong who recently retired. They visited the Sawankhalok District Agricultural Extension Office and asked for the knowledge. Since processing raw materials into products is not their strength, they initially advised Naruporn to set up a farmer group in order to receive the government's support.

With the help of Pakhom, they found Klum Kasettakon Plaeng Yai, meaning a farmer group of large plantations in November last year. Naruporn accepted the treasury work while Pakhom became the group leader. They have 40 members. The group owns 354 rai of banana plantations. Having a group also benefits the farmers. Apart from receiving support from local authorities, the group has negotiating power with the middlemen.

This January, the Sawankhalok District Agricultural Extension Office informed the farmer group about a meeting of the Office of Sukhothai Provincial Farmers Council. Naruporn had a chance to present her idea to produce the banana leaf plates.

"In the meeting, the idea was voted to be the first pilot project of the province. I was very excited," she said.

In February, the Farmers Council brought her to a provincial meeting chaired by the Sukhothai governor. The meeting was about finding a solution to the annual flooding situation in the province. 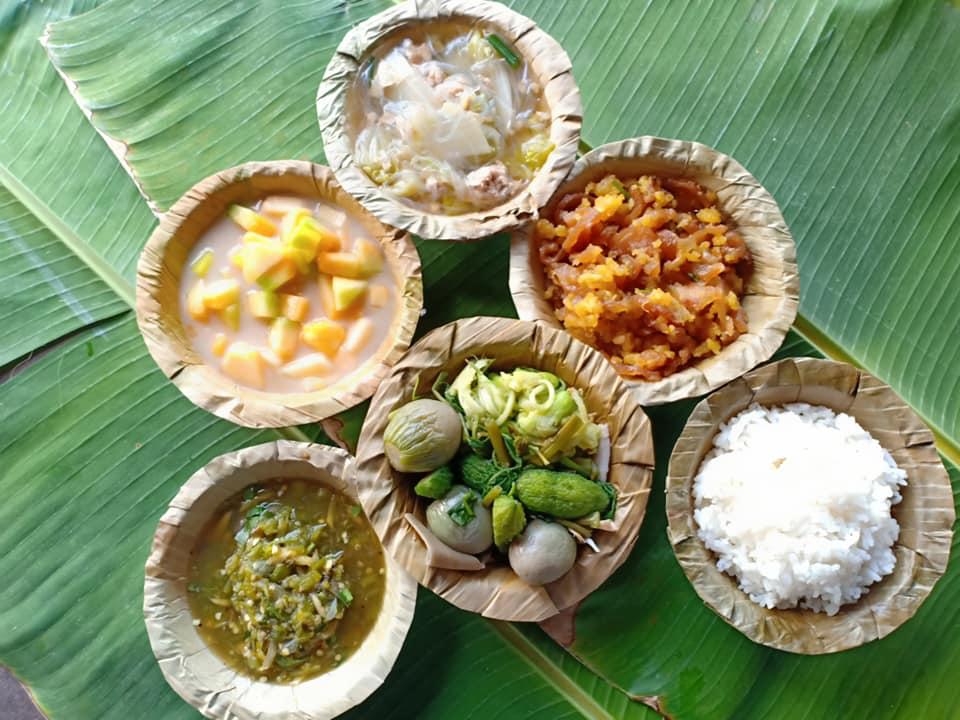 The bowls can be used for serving rice, soup or desserts. Photo Courtesy of Designated Areas for Sustainable Tourism Administration

"Before the meeting ended, the governor told us that the province had a budget to support and hear ideas from farmer groups. I took the chance to raise my hand and told the governor about our project to produce banana leaf plates. To my surprise, the governor not only said yes, he even asked me how much of a budget my group needed. He said there were choices of a 100,000 baht or a 500,000 baht fund, so I chose the latter. The governor verbally agreed and told me that I had to submit the project proposal in order to receive the money," she said.

Naruporn was happy to have the initial investment. However, she had another problem: neither she nor anyone in the farmer group knew how to make the leaf plate.

Although the concept of producing biodegradable plates is not new, as some people have produced plates from fallen leaves of thong kwao (bastard teak), sak (teak), sai (banyan) trees and kab mak (betel palm leaf sheath) before. But she couldn't find any experts who make plates from banana leaves.

"I contacted them all. They said they couldn't help. I wanted to find out if my idea was feasible. The only way to know was to get a plate-making machine and try," she said.

Since the farmer group did not yet get the government fund, Naruporn self-funded the project. She contacted a machine factory in Samut Prakan province. She explained to them the necessity of having the machine with minimal spending.

The company agreed to produce a prototype for her with a 30% down payment. She paid 5,000 baht for her first order. 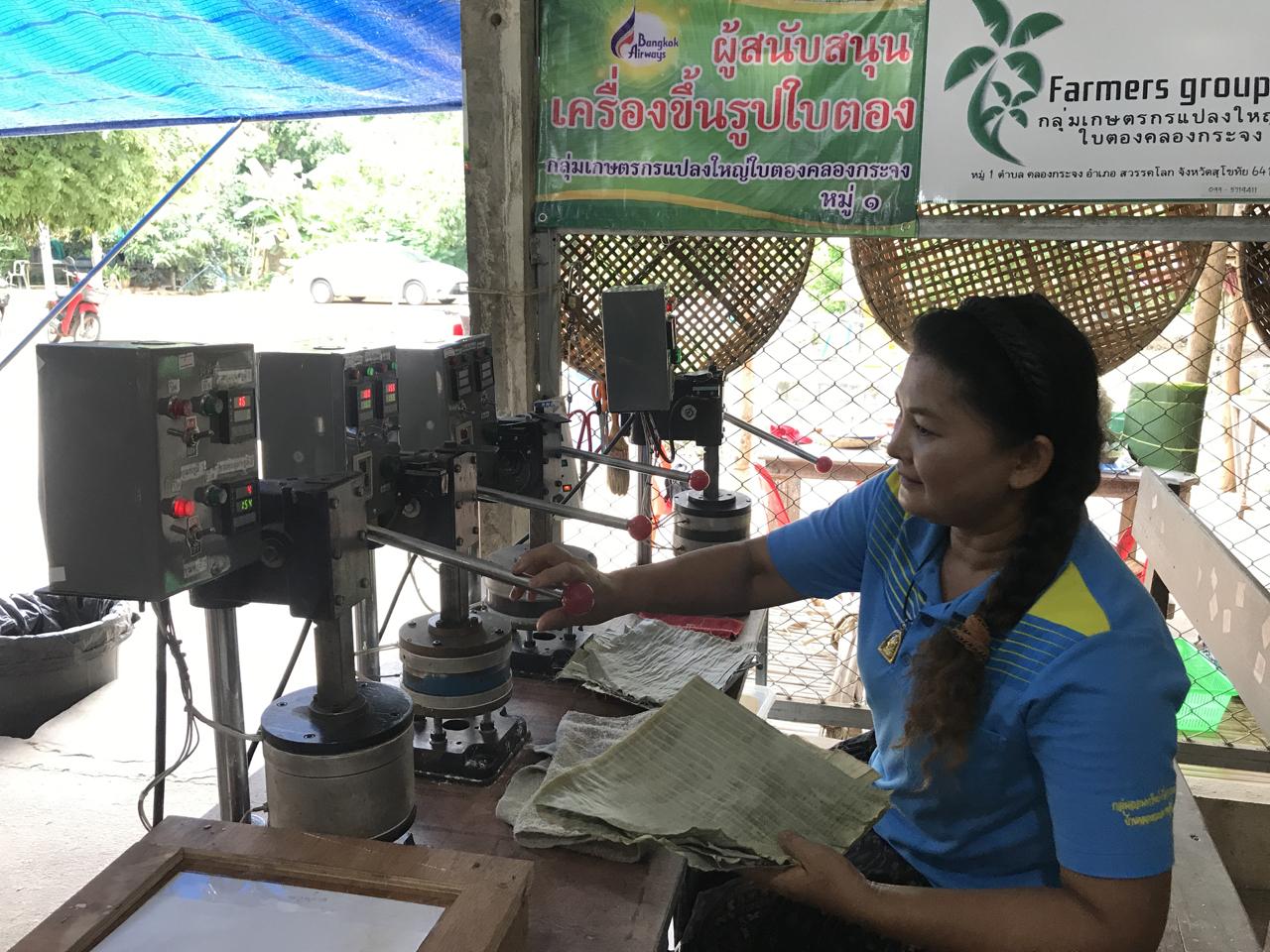 Three machines can be operated by one person at a time. Karnjana Karnjanatawe

"I did not dare tell anyone, not even the chairman of our group or the Farmers Council, that I did press the order before our project received the funds. I only told them a day before the date of the machine delivery. They disapproved of my move, but it was too late to stop me," she said.

The first machine was delivered to Naruporn's house on March 5. Without a manual, she did not know how to operate it. Pakhom called a mechanic of the village for help, but it was best to call the company for basic operations.

The machine has a temperature scale from 100-300 degrees Celsius and a timer. The company advised Naruporn and Pakhom over the phone to start with the lowest temperature and gradually increase. They tried the first plate with fresh banana leaves. It took about five minutes for the leaves to form a shape.

The time was too long. They gradually increased the temperature, but the outcomes were not right. The leaves were always torn or the plates deformed after 24 hours.

"We thought about the old wisdom, that our ancestors used dry banana leaves for wrapping cane sugar so we tried using dry brown leaves. The result was perfect. The plate did not deform. We were very excited," she said.

Naruporn posted the pictures on the group Facebook on March 9, four days after getting the machine. On March 10, she was contacted by local media and restaurants who wanted to press orders. Fame came too soon. The project was only in the trial period. A week after the Facebook post and the news broke, the sample plates started to deform. The dishes were not ready for sale. 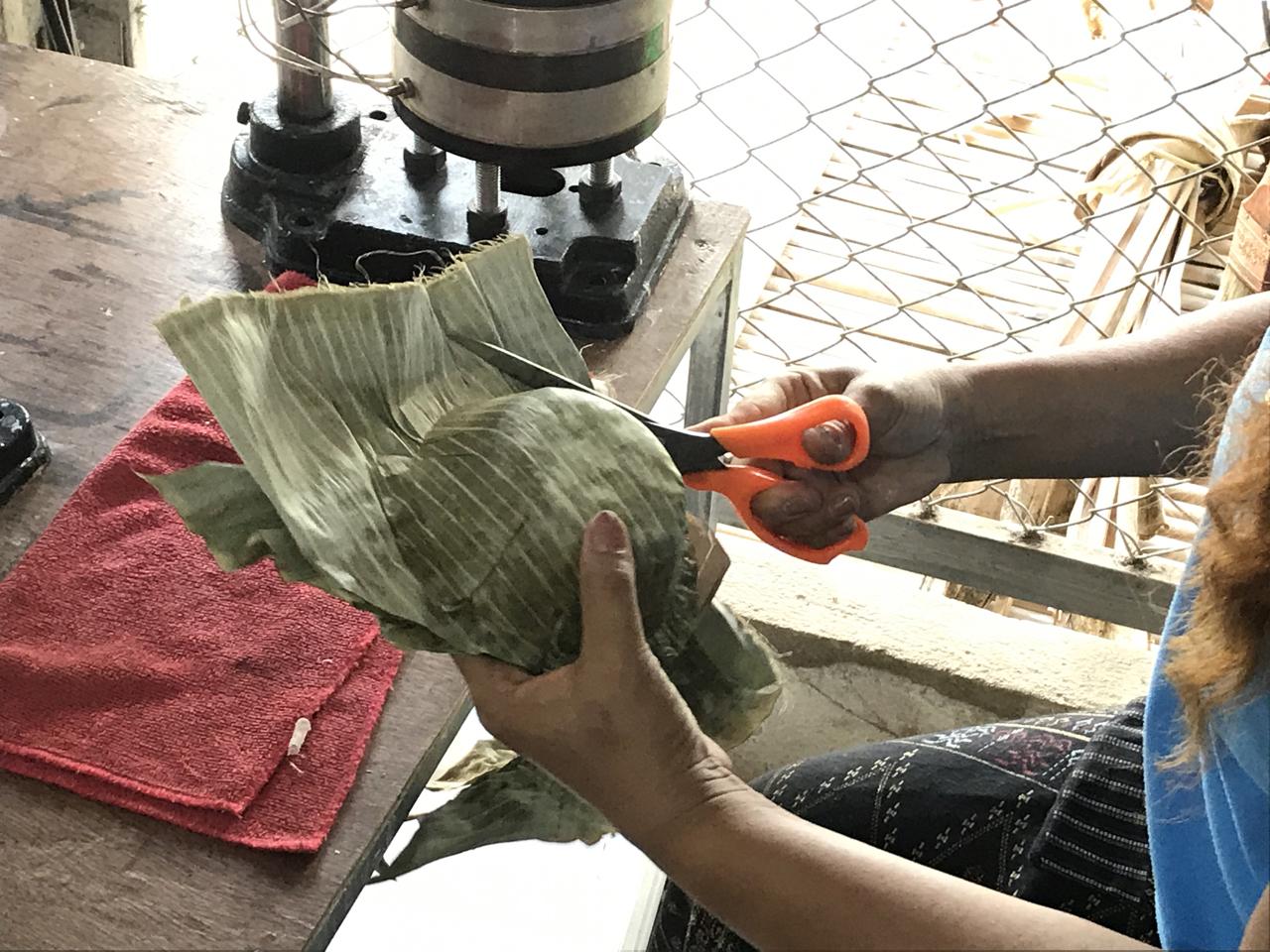 The Farmers Council led Naruporn to a research team from the Thailand Institute of Scientific and Technological Research. They later paid a visit and suggested Naruporn change the glueing technique from using paeng piak (boiled tapioca starch) to a mixture of tapioca starch and water. The method was right.

Naruporn also changed the raw material from brown leaves to sun-dried green leaves because it is easy to find. She also stacked the leaves together in three to four layers depending on the size of the leaves. So far the plates and bowls can be stocked for three months remain in the right form.

"Our samples which we created in April are still in good shape. They can be used for serving hot soup or for heating food in a microwave oven," she said, adding that the plates can even be reused.

Today the farmer group has three machines for making 12cm bowls and 14cm plates. One machine can produce up to 200 plates or bowls a day. Around the middle of August, 10 more machines will be delivered. The farmer group will be able to produce other types of dishes, like 9cm rectangle bowls and 14cm oval plates. They plan to create dishes with the mix of banana leaves and its outer part of the stalk.

Although the business of producing banana-leaf plates is in an infant stage, the farmer group of Klong Krachong has already gotten pre-orders from here and abroad. The customer demand keeps coming while near and far communities request workshops.

Naruporn is willing to share experiences with any farmer groups, students or those who are interested in reducing the single-use plastic plates and foam containers.

"I don't mind if anyone wants to produce the banana-leaf plates like us," she said. "I am not afraid of having competitors. The more people are interested in it, the better. It shows that they care about our environment. Only me and my group cannot do it alone. Together we can help reduce the use of foam food containers."

Step by step: How to produce a banana leaf plate

1. Dry fresh banana leaves over hot sand for at least a day

2. Cut into a preferable size.

3. Select an untorn piece for the first layer and apply the mixture of tapioca and water all over.

4. Place the second layer, which can be torn or dry leaf, then apply the glue-like mixture on top.

5. Put another beautiful piece on top.

6. Place the stack of banana leaves on the mold of the plate making machine. Use a temperature of 130 degrees Celsius for 90 seconds.

7. Take out the plate and cut the unwanted part. The plate is ready for serving food. 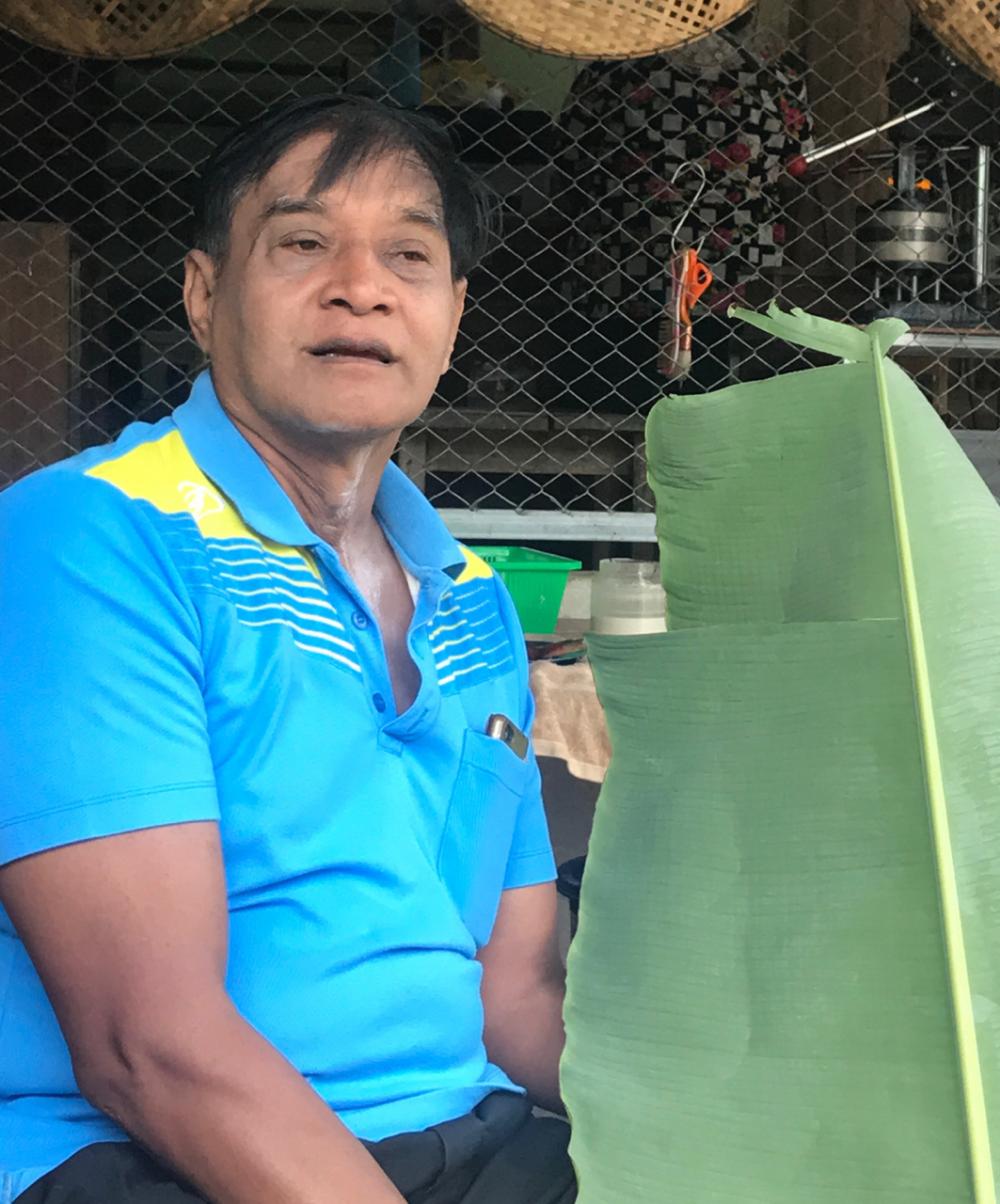