A caricature of oneself
Life
Social & Lifestyle

A caricature of oneself

What happens when, in lockstep with the times, our columnist commissions a mascot for himself

2 Months Before The Event 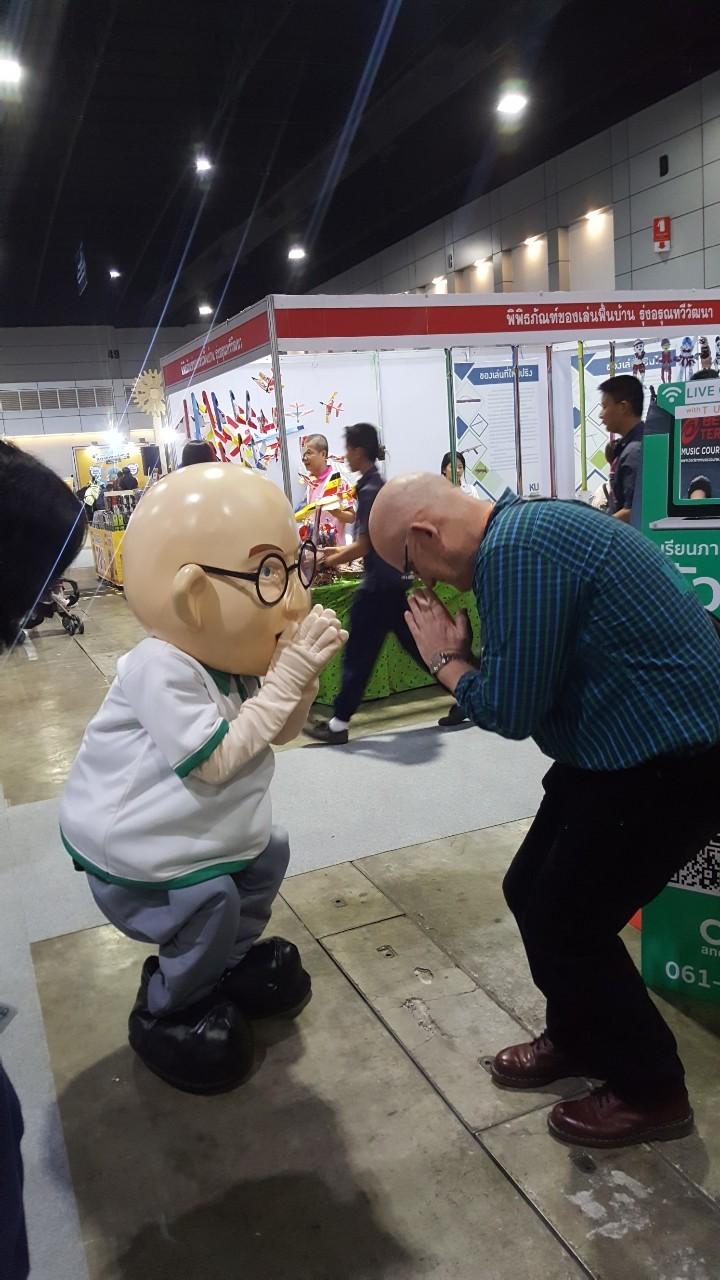 The Avengers were standing sheepishly outside my office.

"Come on in," I said. Nothing is more irritating than sheepish staff hovering outside my office. You either come in or you don't.

I call them the Avengers because they are a crack team with superpowers such as getting jobs done quickly and efficiently, though I dare not single out which staff member resembles which Avengers character; there is, after all, the Hulk in there.

There is but one superpower they do not possess: the ability to speak plainly and directly.

"Stop beating about the bush," I replied curtly. "What do you want to say?"

Joy leaned forward. "We thought that we should have a mascot."

"It can walk around schools and shopping centres handing out brochures," said Ploy, to which Fai, again, displayed vigorous agreement.

A little background: This meeting happened before we were to launch our online English-language website. I shall endeavour to make this resemble an advertisement as little as possible; suffice to say it's my name with a "dot com" at the end and we call it ABC … get it? My name dot com?

Part of the website is aimed at school students preparing for exams such as O-Net, IELTS and TOEIC. It was the Avengers' idea to make a mascot that could wander around public places handing out brochures. It would save me having to do it myself.

The Avengers had already contacted a mascot maker, and had even booked this non-existent mascot at a big event in two months' time at Impact Arena.

"A mascot of you!" said Tinny.

As they explained it, my head began to swell, though nowhere near as swollen as the head you are about to read about.

I had finally arrived.

Of your favourite columnist!

My life has been a rollercoaster of experiences, and being in the media spotlight has brought its share of memorable experience. My face has been on the side of buses, on book covers, hosting TV shows, emceeing major events … but a mascot of me? Never!

The closest I ever got was about 10 years ago when I was teaching English on TV. A brand consultant from Hong Kong -- she had a much more prestigious title, but it is lost to time -- came to the TV station.

"You know what, Khun Andrew?" this smartly dressed thirtysomething executive began, as we gathered for pre-dinner cocktails. "You should have a doll."

I nearly choked on my mid-priced chardonnay.

"It would be excellent branding for you. You know -- one of those dolls where you pull a string, and it says something."

Like what, I asked? "Another screwdriver and this time go easy on the orange juice!"?

I suggested that as a joke and my Thai counterparts did laugh, but as anybody who has ever worked with Hong Kong consultants knows, they don't like lighthearted conversations that veer from fiscal opportunity.

"I was thinking more like, 'Hey! Let's learn English!'. Or, 'Isn't English fun?'. Imagine that," she said, quite seriously. All I could imagine was a landfill of unsold plastic dolls piled up in Samut Prakan wasteland, and I nixed the idea quickly.

That was a decade ago. I no longer do morning TV, and this was the point the Avengers were skirting around.

"The mascot would be good for … your image," said Joy.

"Students perhaps don't … recognise you so much," said Tinny.

"A mascot would make them interested in you … again," said Ploy, as Fai nodded in restrained agreement.

Ouch. So now we hit the bullseye. This information sent my ego crashing back down to earth. I have been blessed with a long career in the spotlight, but yes, it has to be said, my recognition factor is low among schoolchildren, owing to the decade that has passed since my morning TV shows.

"Students will love you," said Tinny.

"How wonderful it will be!" said Ploy, and you know what Fai did.

I signed the form. I swear it was my ego doing the signing, not me.

1 Month Before The Event

The mascot maker was having all sorts of trouble with my head.

"They're having problems with your ears, too," said Ploy. "They don't stick out enough." Fai dared not say a word.

It was true, though.

The head was massive. With a little tweaking, sending sketches back and forth, it started to look like me.

In these modern times, every single product and service needs a mascot -- costumes manned by young men and women paid 800 baht a day. Apparently Disney has some strict rules about wearing their Mickey Mouse and Donald Duck costumes, such as 15 minutes and then a mandatory break. Not here in Thailand. You wear it until you crash to the ground in a pool of perspiration, blood and silicone. And god help the poor guy who has to wear an oversized bowling ball for a head.

1 Week Before The Event

"It's here! The mascot has arrived!" shouted Joy.

In walked Tinny and Ploy and Fai, carrying a big green sack. Inside was a costume featuring oversized shoes, giant hands -- and a massive, round, silicon smiling head that, yes, resembled a bowling ball more than me.

"You'll be so famous!" cried Tinny.

"I think this will make us successful!" added Ploy, and Fai appeared to agree.

As a joke, I tried on the costume. I put on the silicon head last.

It weighed a ton.

Last Saturday and Sunday, the mascot made its debut.

We hired a young man to wear the outfit. He was half my size, but the cruel mascot maker had added a wire skirt around the stomach, rendering it bell-shaped.

The young man put on the head and immediately complained of neck pain. Luckily, wearing the head, you couldn't really hear what he was saying, so we ignored him.

We set off for a walk around the event amid thousands of schoolkids. And how did it go?

I would love to tell you that it was a roaring success, catapulting me back into stardom, promoting our new website and raising my awareness among school students.

But you want the truth?

The mascot was a huge success, yes. Gaggles of students rushed up to it, high-fiving it, hugging it, crowding around it for photographs, shaking its hand. The mascot perpetually waved and smiled and attracted attention. The kids loved it when the mascot cradled its own head in its hands, little knowing it was the kid inside trying to alleviate his neck pain.

It appears Thai kids just love a bald man with big ears and glasses. On a mascot, that is.

The Avengers were right; the mascot is great for business. The kids went wild over it. I know. I was standing to the side, all alone, watching it unfold.

My dream came true; I had a mascot in my likeness. But don't call it by my name. Call it Frankenstein. When it comes to popularity, the monster has slaughtered its maker.