Rejuvenate mind, body and spirit in the Land of the Thunder Dragon

"Welcome to Bhutan, the Land of the Thunder Dragon," announces our Druk Air pilot, about 15 minutes before we land at Paro International Airport. For passengers like me, in a window seat on the left-hand side of the plane, the trip of a lifetime begins now.

As the plane flies around a mountain, far in the distance I glimpse the snow-covered Himalayas. Landing at Paro International Airport, at an elevation of 2,320m, is nothing short of nerve-wracking. The dramatic approach is at a 45-degree angle between mountains; not until the very last minute does the 2km runway appear. One of the most dangerous landings in the world, only 17 pilots are qualified to land here.

Nestled between India and Tibet, the tiny mountainous kingdom of Bhutan is often referred to as the world's "last Shangri-La". It's easy to see why: as I make my way to the capital city of Thimpu, an hour-and-a-half from Paro, serenity takes over almost immediately. Fluttering prayer flags and chortens (stupas) are dotted along the roads and avenues, a constant reminder that everyday life is permeated by Buddhist teachings and philosophy. 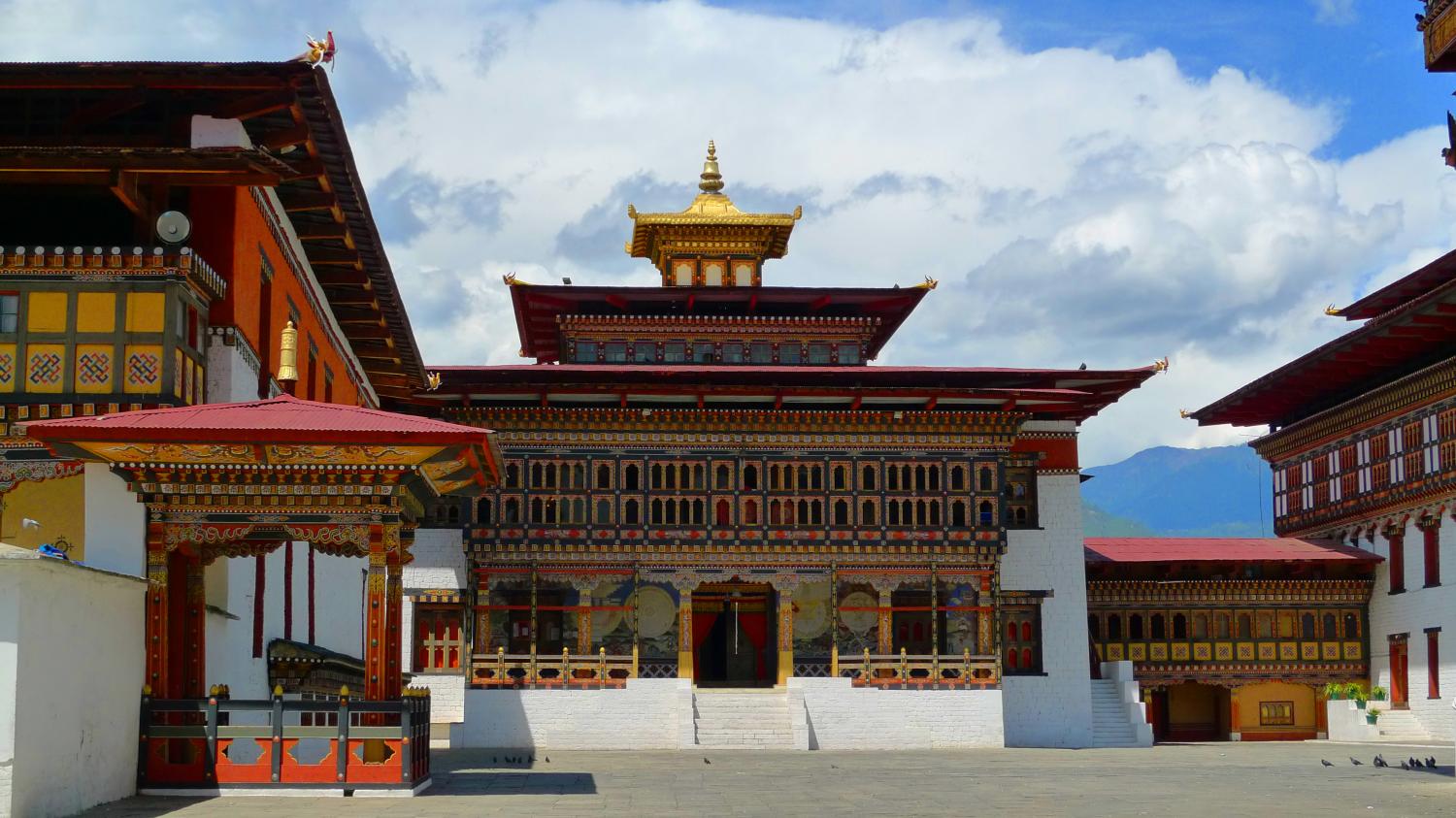 Tashichho Dzong, the fortress of the glorious religion, in Thimphu, Bhutan. Druk Asia

My first stop is the National Memorial Chorten, a Tibetan-style stupa. Built in 1974, it commemorates the nation's third king Jigme Dorji Wangchuck, considered the father of modern Bhutan. Swarming with devotees from all walks of life, circumambulating the chorten in a clockwise direction (a rule for any religious structure in Bhutan) or turning the large red prayer wheel, it is a hive of activity throughout the day.

Sorely in need of relaxation after a long flight, I check into Six Senses Thimphu for a good night's sleep and signature Bhutanese hot stone bath. Charcoal-heated river stones are dropped into a wooden tub filled with naturally heated water and wormwood, which is known for its medicinal properties. 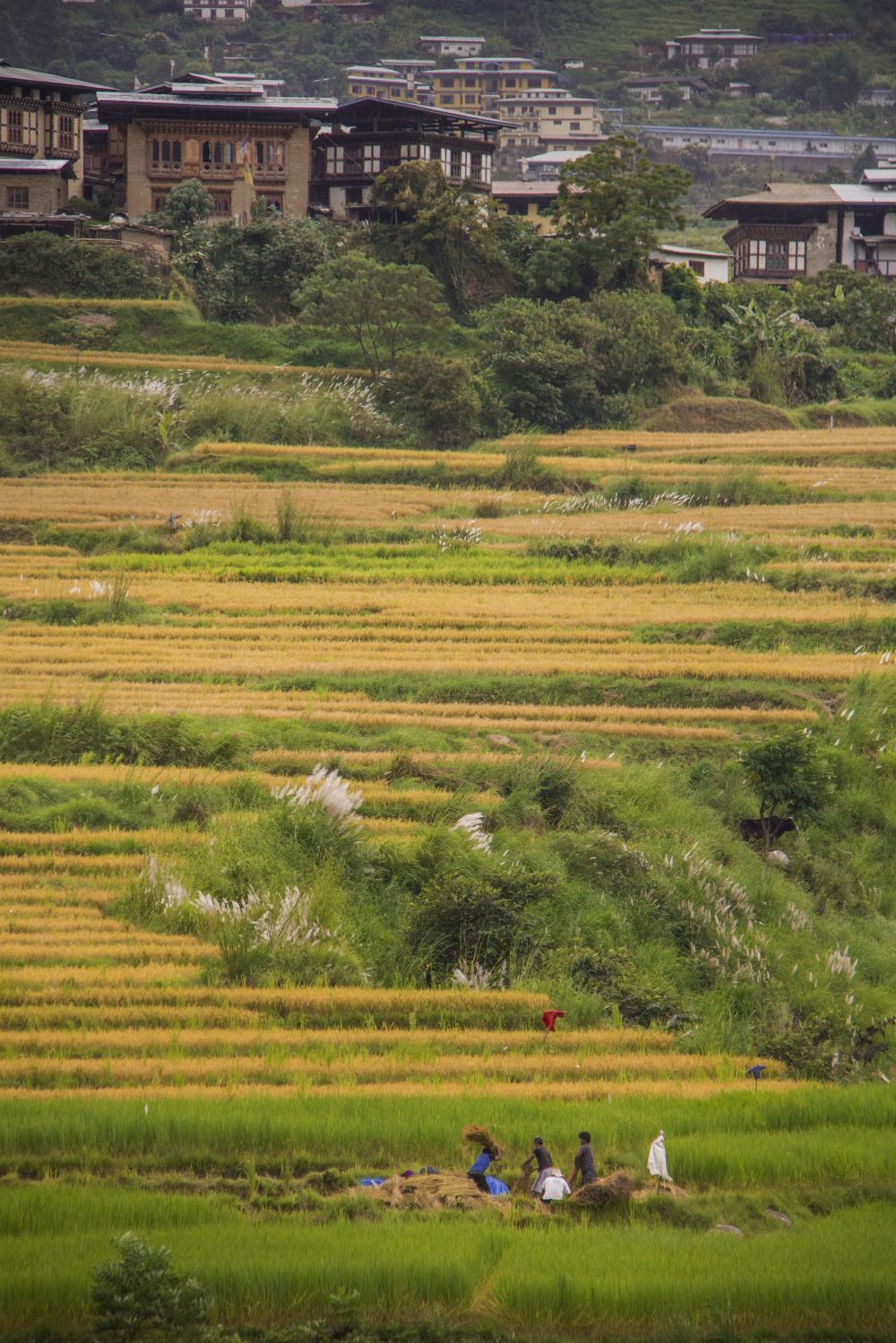 The meditative state that the bath puts you in is perfect for an early morning visit to Buddha Point, where a 51.5m-high bronze statue of Buddha Dordenma sits atop a hill in Kuenselphodrang Nature Park. One of the largest sitting Buddha statues in the world, it is said to bestow peace and happiness. The view of Thimphu valley from Buddha Point is especially beautiful at night.

The Bhutanese are extremely patriotic and it is rare not to see any of them in national garb; in fact, this is compulsory during working hours. Men wear a robe called the gho and the women wear a dress called the kira. Both are rather elaborate and come in a variety of designs as traditional weaving is an important part of the culture, as evidenced by the National Textile Museum, which is well worth a visit. 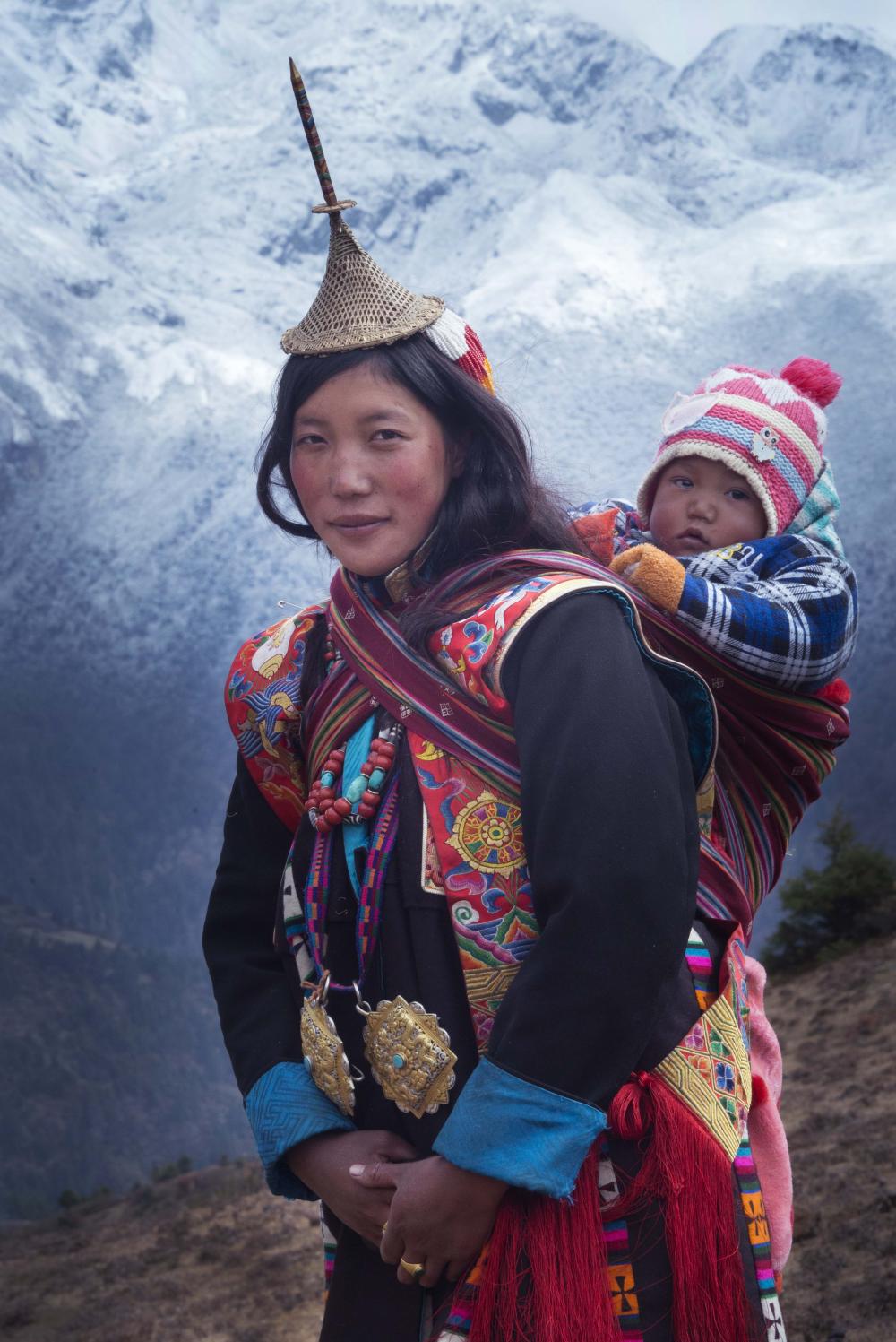 No visit to Thimphu is complete without a trip to Tashichho Dzong (or the Thimphu Dzong). The "fortress of the glorious religion" was constructed in 1641 and restored by Jigme Dorji Wangchuck in the 1960s. It houses a monastery and the office of the Dharma Raja, the head of the civil government, who shares power with the king. It is also the country's official summer capital. The building features the elaborate towers and roof architecture seen throughout the country. Visitors must wear national dress, so this is your chance to dress like a local! (Most tour operators provide you with a gho or kira.)

The road to Gangtey (an elevation of 3,000m) runs through the Dochula Pass, which offers a stunning panoramic view of the Himalayan mountain range on a clear day. Sadly, I'm not so fortunate, but the mist that hovered over the mountaintops is nevertheless breathtaking. The pass is a popular spiritual destination, featuring some 108 chortens, built by Her Majesty The Queen Mother Ashi Dorji Wangmo Wangchuck to commemorate Bhutan's victory over Assamese insurgents in 2003. 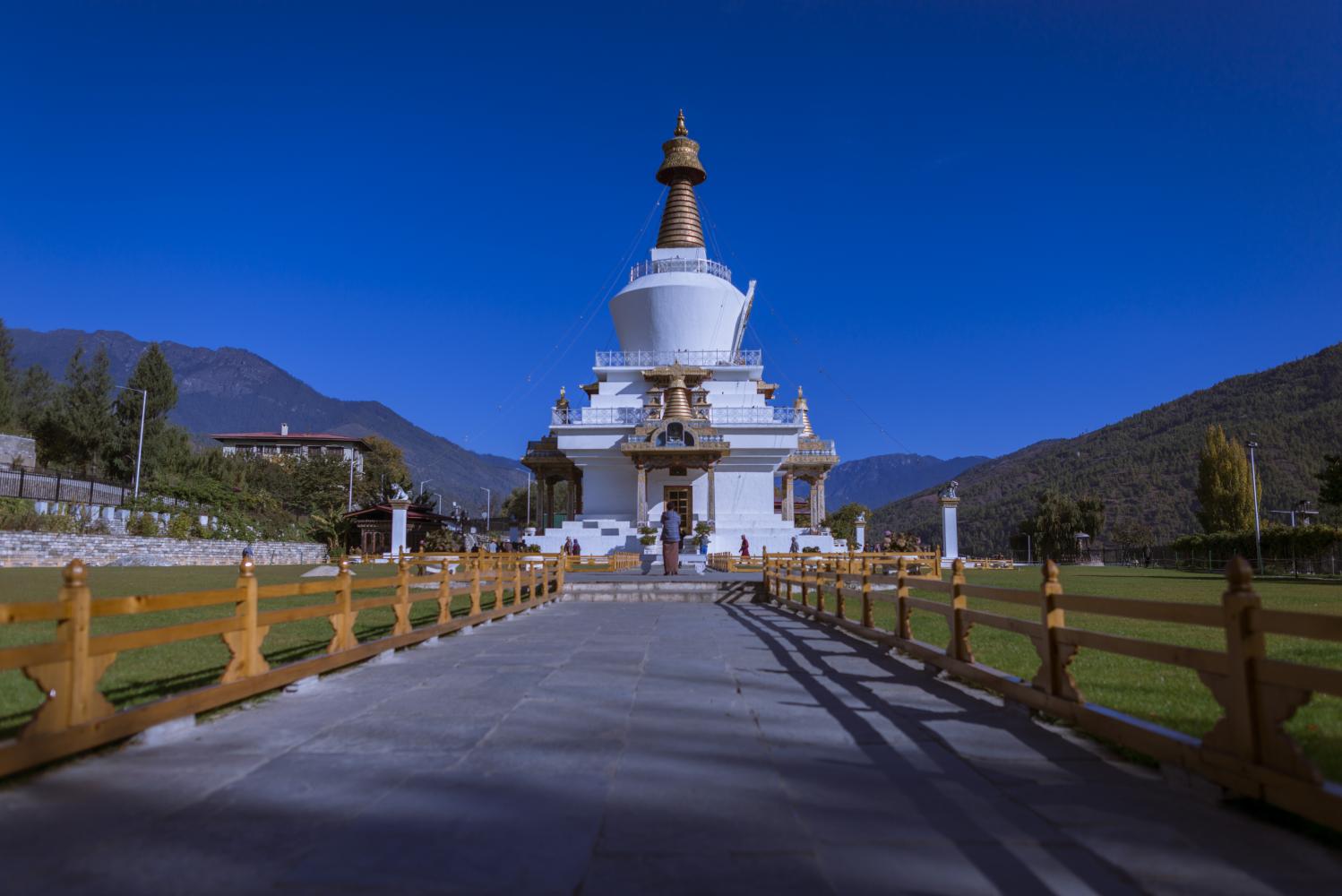 Driving through small villages and lush greenery, I can't help but notice the abundance of marijuana growing wild. Apparently, it's used as pig fodder!

On a forested hill overlooking Phobijkha Valley is Gangtey Goemba, a monastery dating back to the 17th century. The largest Nyingma monastery in western Bhutan, it was founded in 1613 by Gyalse Pema Thinlay, the grandson of Pema Thinley, a 15th century "treasure seeker" who predicted that a monastery named "gangteng" (hilltop) would be built at this site and that his teachings would spread from there.

The best way to explore the U-shaped glacial valley is through the Gangtey Nature Trail, a popular hike that takes around 90 minutes. The trail starts at Gangtey Goemba, descending towards Semchubara Village and ending at Khewa Lhakhang, across a small stream. Phobjikha Valley is one of Bhutan's most beautiful destinations. This wide, rolling valley is surrounded by mountains on all sides. It is a place where time stands still. 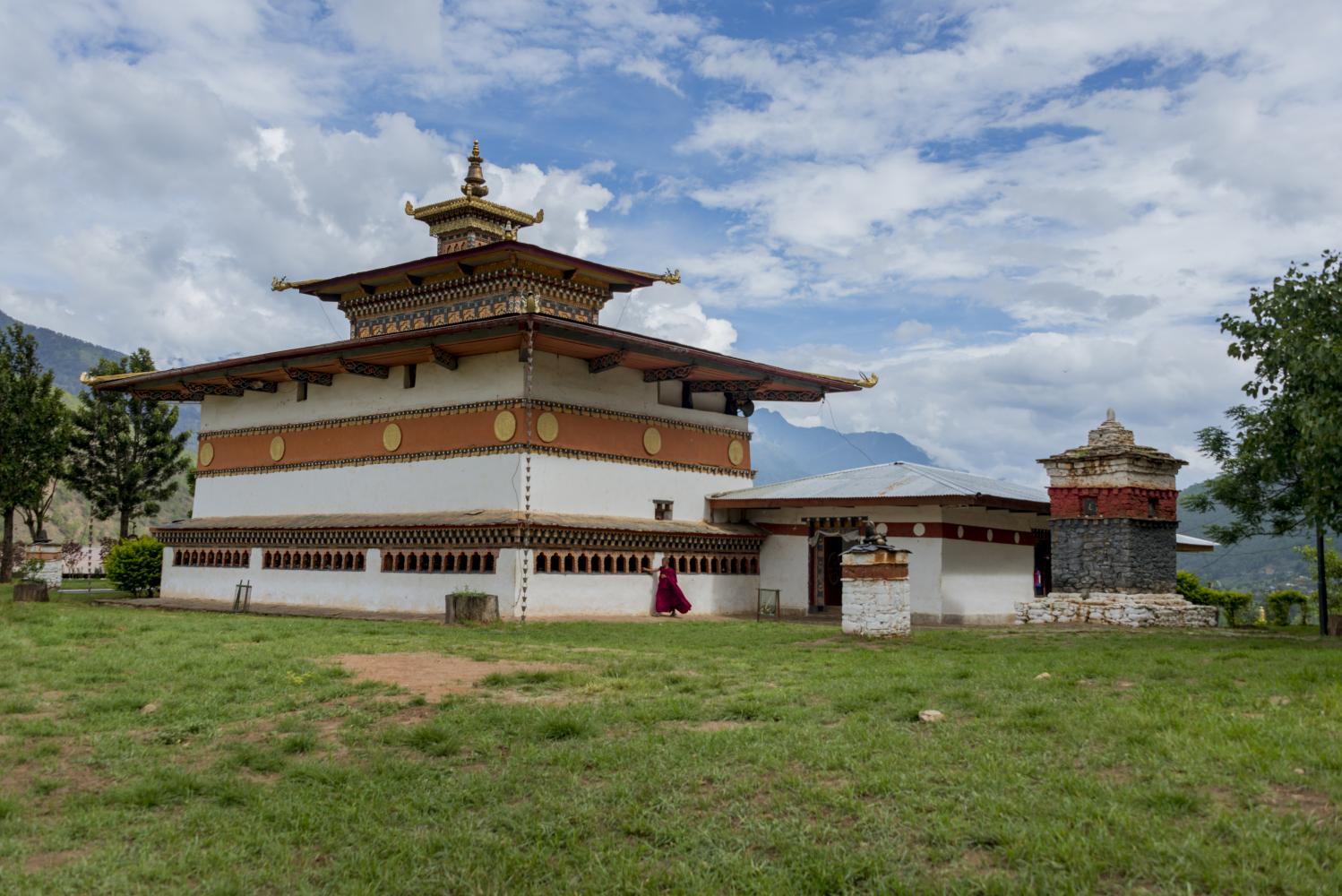 The valley is also notable for being the winter home of the endangered black-necked crane, which migrates from the Tibetan plateau every year. No visit to Gangtey is complete without seeing Karma, the solitary black-necked crane at the Black-necked Crane Visitor Centre, who is injured and cannot fly.

The next day's drive is to Punakha, a quaint little town and the nation's former capital. Our first stop there is Chimi Lhakhang at an elevation of 1,200m. Built in 1499 by the 14th Drukpa, Ngawang Choegyel, the temple honours the saint Drukpa Kunley, also known as the "Divine Madman". The scenic 30-minute walk to the temple takes you through fertile paddy fields and the charming village of Sosokha. Don't miss all the Shiva lingams that decorate the exteriors of the houses.

Popularly known as the fertility temple, Chimi Lhakhang is a popular site of pilgrimage for locals and foreigners alike. Many claim to have been blessed with children after praying at the temple. You have been warned! (Though receiving blessings is optional.) Fun fact: traditionally, recipients of blessings name their child Kinley. 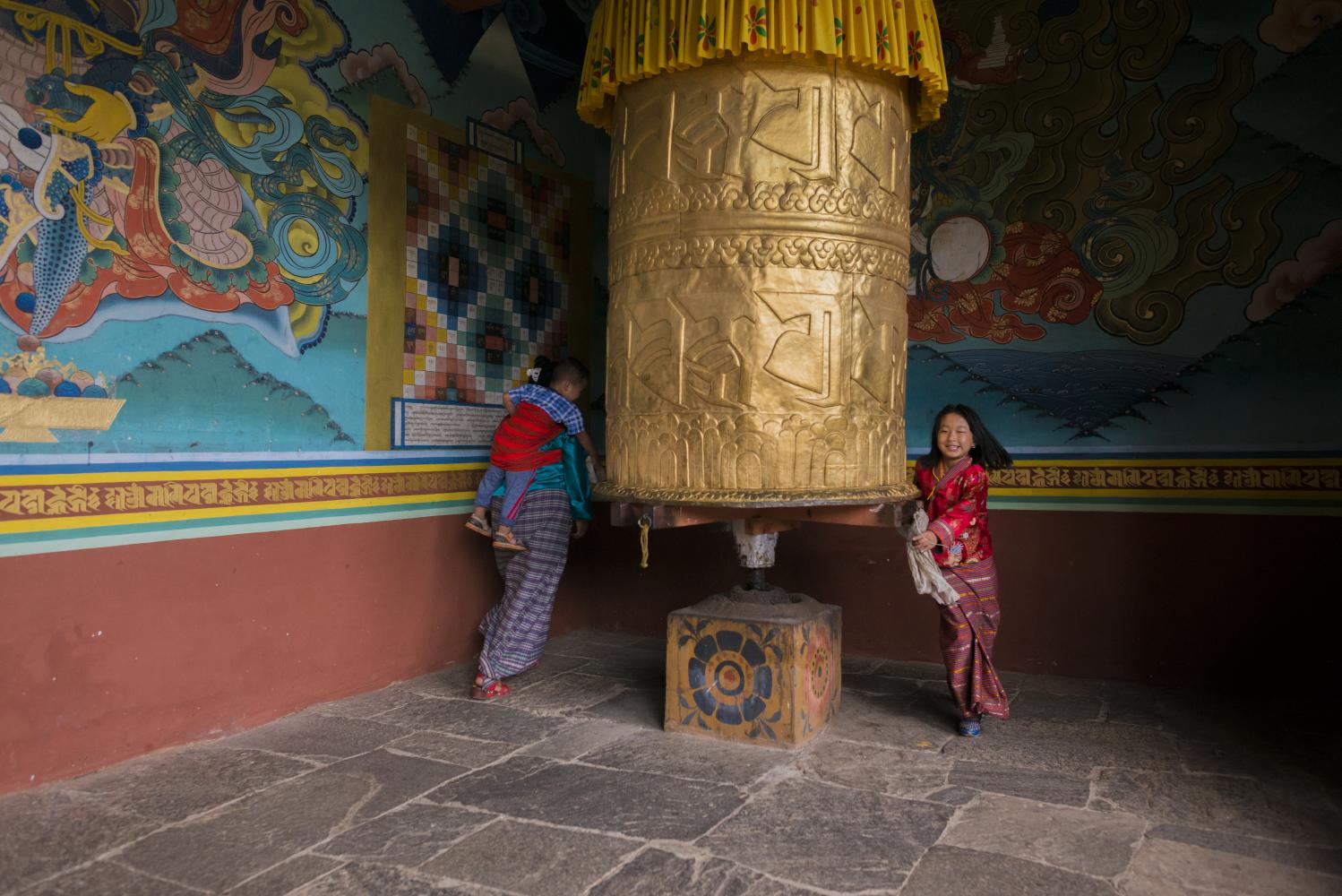 Located at the confluence of the Pho Chu and Mo Chu rivers is the spellbinding Punakha Dzong, the most picturesque dzong in the kingdom. Built in 1637 by the Great Unifier of Bhutan to house the religious and administrative seats of the region, this was where a dual system of government was introduced in the 17th century. The first king, Gongsar Ugyen Wangchuck, was crowned here in 1907. Damaged by four fires and an earthquake over the centuries, the dzong was fully restored by the fourth king Jigme Singye Wangchuck. It is now the winter home of Je Khenpo, the head abbot of Bhutan, along with a retinue of 1,000 monks.

It is as spectacular on the outside as it is on the inside, where the intricate woodwork by Bhutan's finest craftsmen are on full display. Check out the Kuenray, or coronation hall, where Bhutanese kings are crowned. Also known as the Palace of Great Happiness, it is the second oldest and second largest dzong in Bhutan. 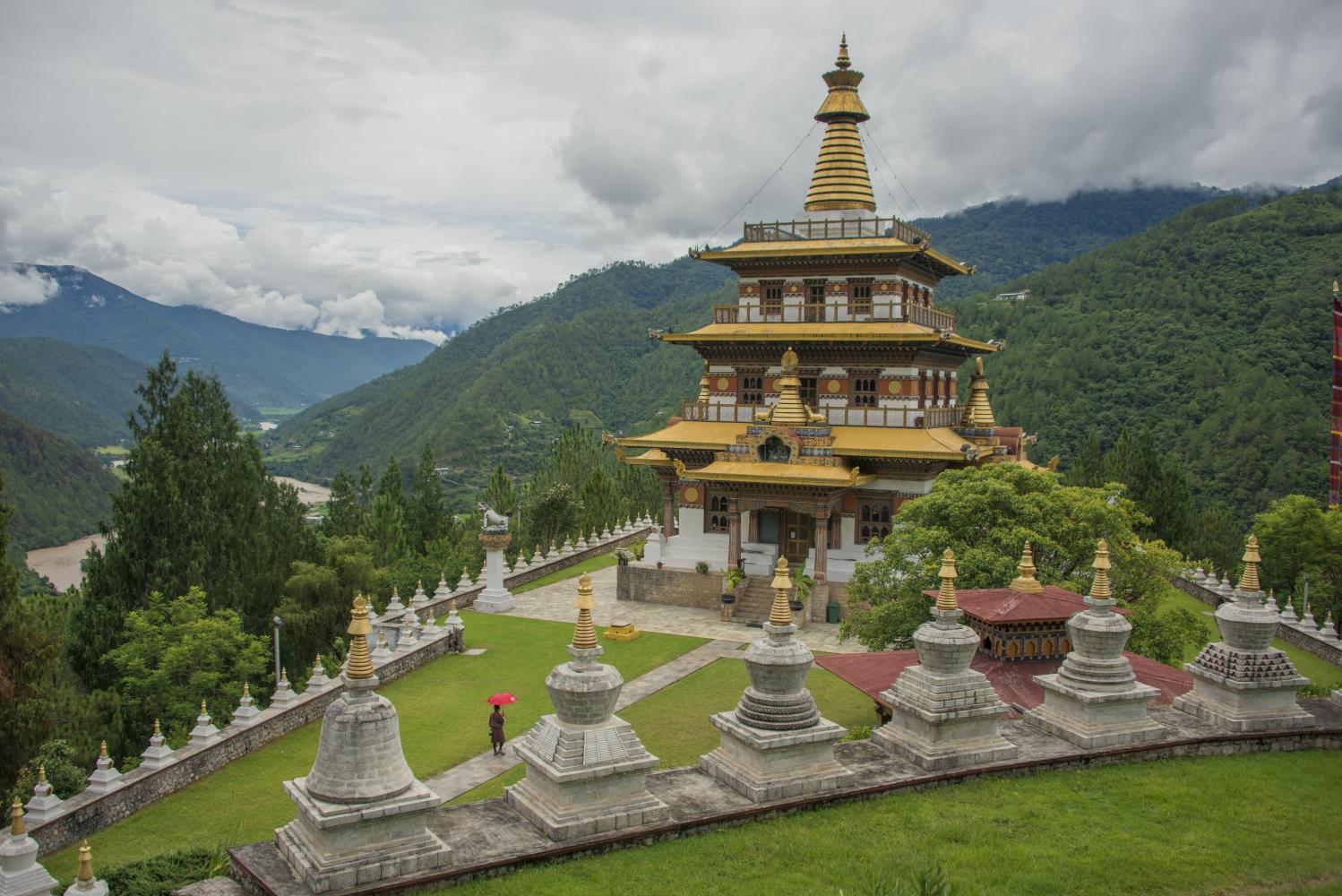 The Punakha Suspension Bridge, the longest in the country, is 160-180m across. Perched high above the swirling rapids of the Pho Chu, it connects Punakha with the Punakha Dzong. Not for the fainthearted, but perfect for those in need of a quick adrenaline shot!

Onwards to Paro, home to the oldest temple in the country, Kyichu Lhakhang, which translates as "reservoir of peace". Built in 659, the temple retains its 7th century architecture and decor. It is one of 108 temples built by the Tibetan king Songtsen Gampo. Legend has it that the temples were built to subdue and vanquish an ogress that was obstructing the spread of Buddhism, and were put up in a single night. No mean feat! Next to the temple is a museum dedicated to the late poet and scholar Dilgo Khyentse Rinpoche. 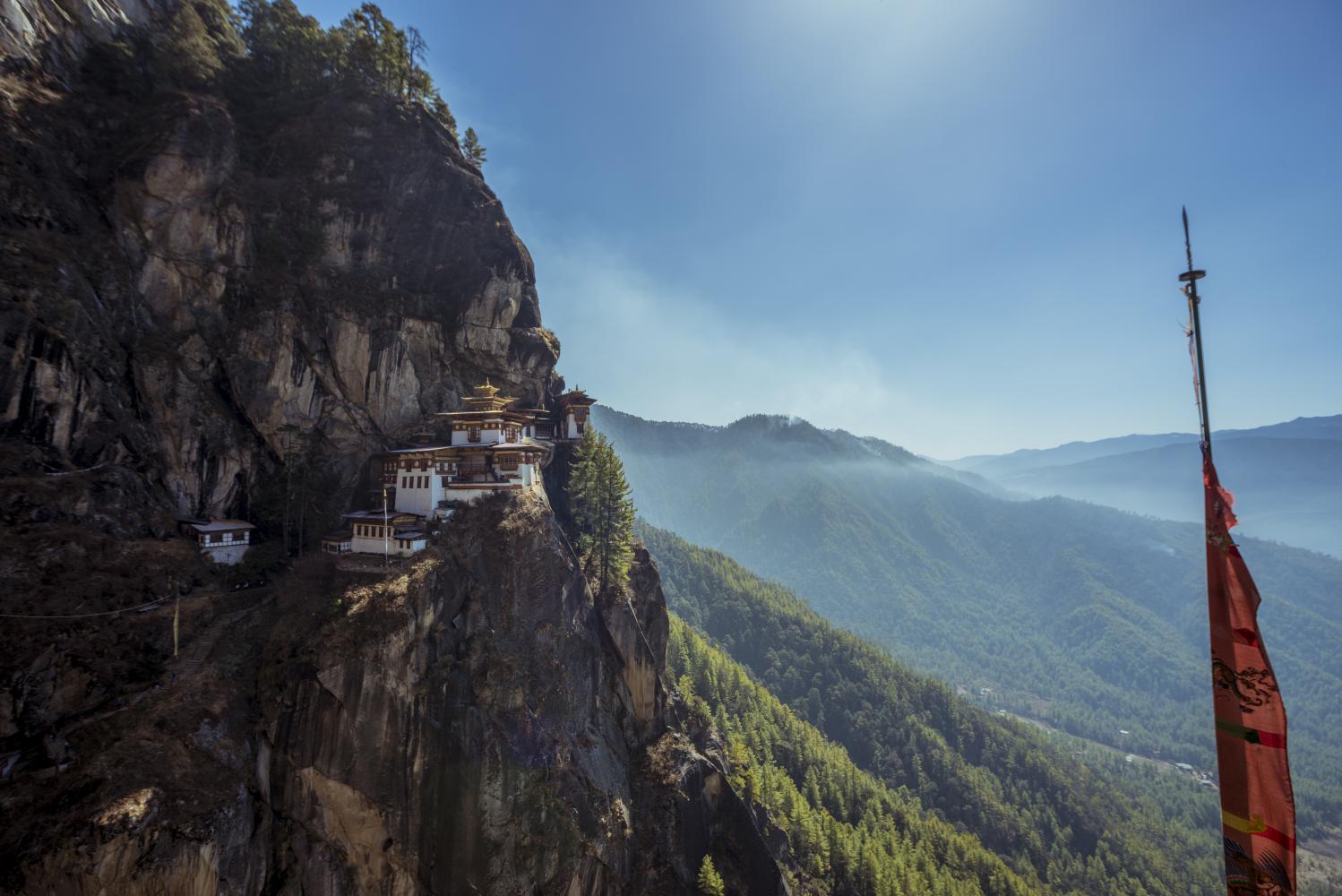 Taktsang Monastery, aka the Tiger's Nest, in Paro, Bhutan.

Another of Paro's highlights is Rinpung Dzong (Fortress On A Heap Of Jewels), built in 1646 by Zhabdrung Ngawang Namgyal, the founder of Bhutan. Its balcony offers stunning views of Paro Township, complete with a river running through it.

Rinpung Dzong is the administrative centre for Paro and serves as the school of monastic bodies for Bhutan's western region. Every year between March and April, the Paro Tshechu, one of the nation's biggest festivals, is held here. A few scenes from the 1993 movie Little Buddha were filmed here.

No visit to Bhutan is complete without undertaking the trek to the kingdom's most famous monastery: Takstang Goemba -- the Tiger's Nest. Perched dramatically on the edge of a cliff, one can only marvel at the architectural prowess required to build the structure in 1692.

According to local folklore, Guru Rinpoche flew to this location from Tibet on the back of a tigress (his consort Yeshey Tshogyal) and meditated in one of the caves, before emerging in eight manifestations. 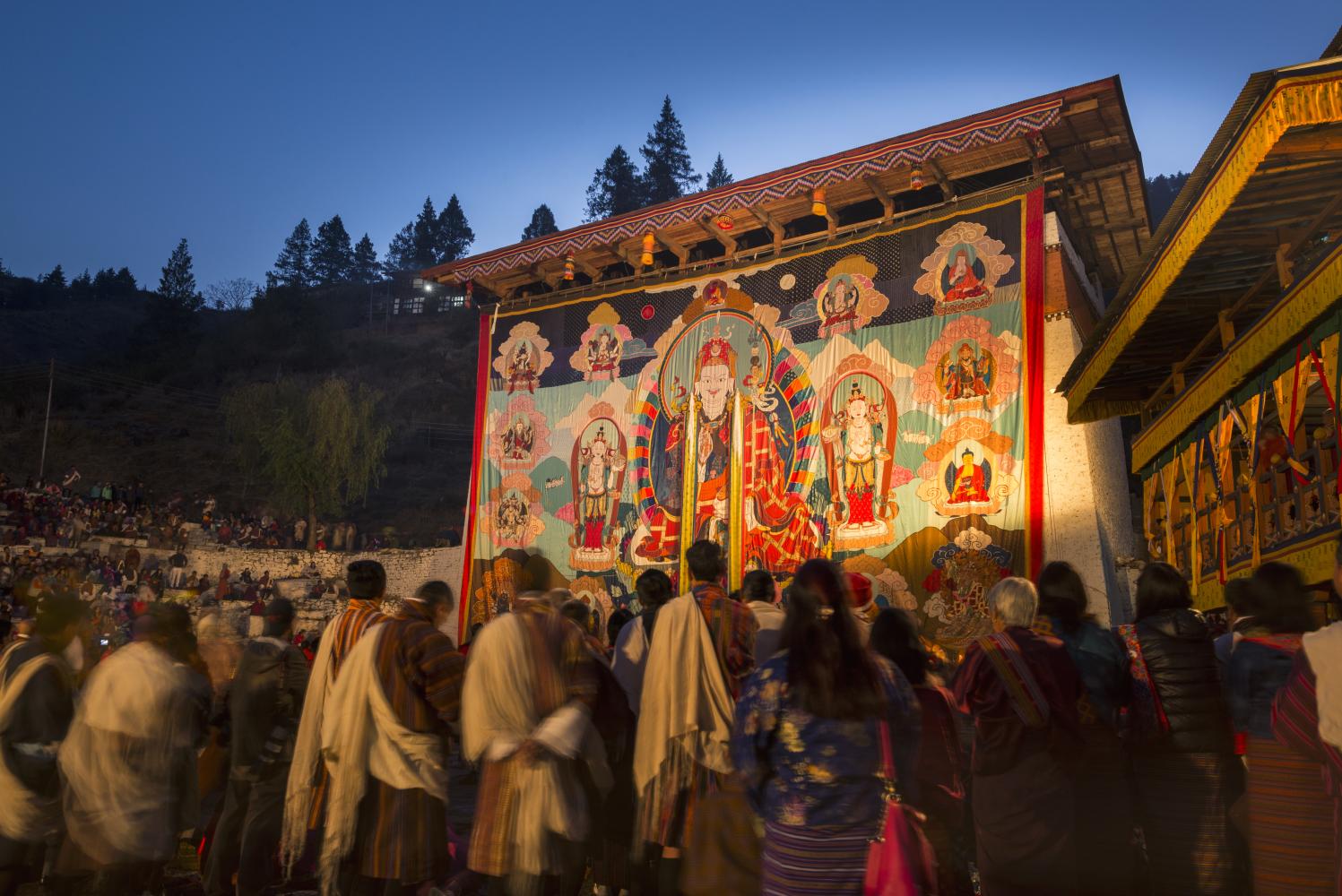 The Paro Tshechu is held annually in April.

The trek up to the monastery takes several hours (it took us three hours just to get to the half way point), as you ascend more than 2,000 feet from the valley. Best to start early in the morning as the monastery is closed from 1-2pm.

Upon reaching Taktsang, after an uphill trek that requires all your physical and mental strength and then some, you are overcome with a sense of achievement. It is not just that you have reached the Tiger's Nest, you have had the full experience of Bhutan, a country like no other.

Happiness is a state of mind. When that emotion is evoked day-in, day-out, it becomes a place. Bhutan, for its people, for me and for numerous visitors before and after me, is such a place. It was no surprise to see The Bhutanese Guide To Happiness in the hands of almost every passenger on the plane ride back.

To deter low cost tourism, Bhutan requires that visitors spend a minimum per day of US$250 (7,660 baht), or $200 during the low season; there is also a surcharge for solo travellers. To ensure compliance, visitors must sign up with a registered Bhutanese tour agency before arriving. The fees cover accommodation, meals, transport, fuel, a guide and permits for visits and daily excursions.

Druk Asia is the only tour company in Thailand that specialises in travels exclusively to Bhutan. The company is also the Thai representative of Druk Air and Royal Bhutan Airlines, and their packages can be customised to suit individual needs and interests: 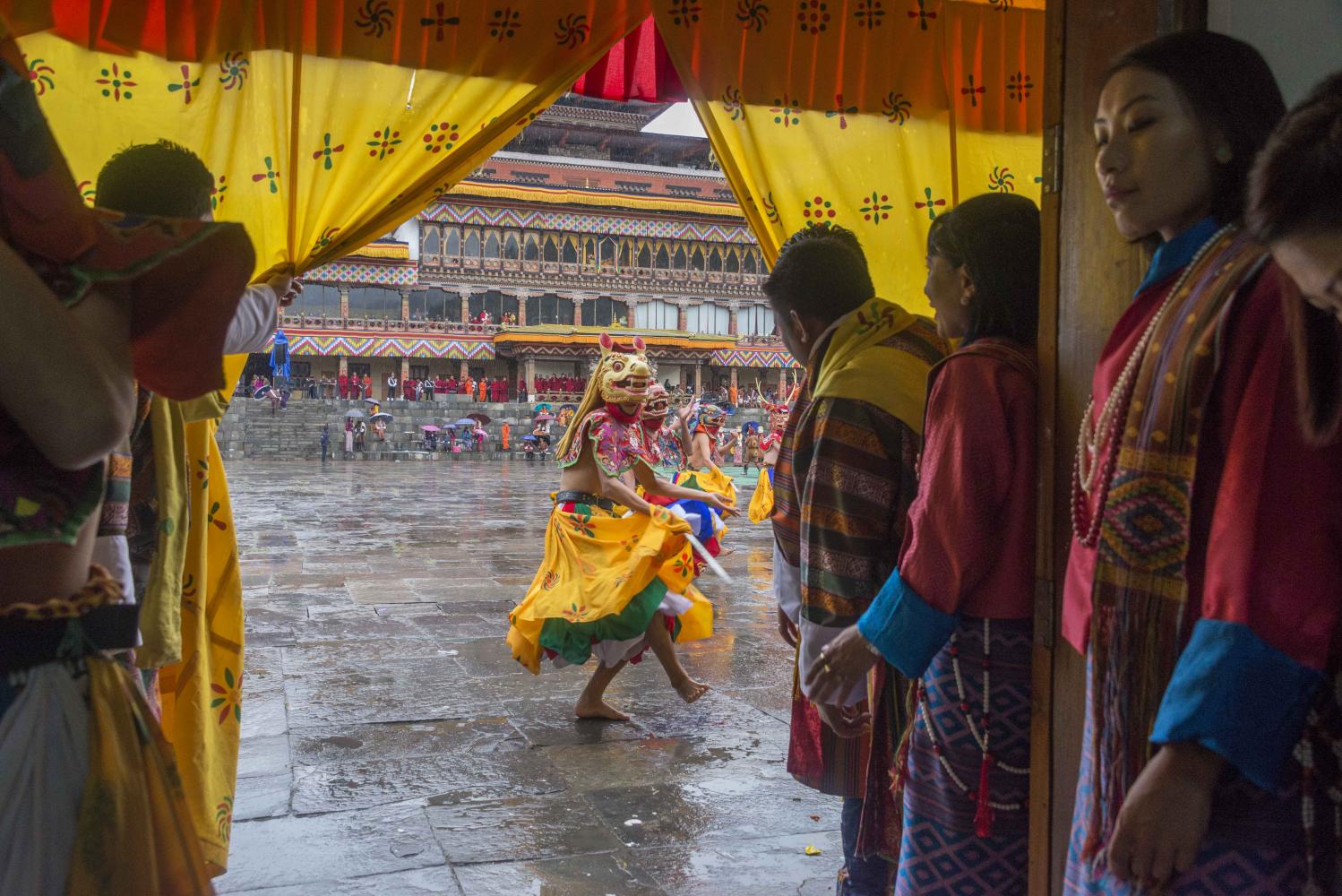 Catch the Thimphu festival this month.

7-Day Essential Bhutan is a good option for first-time travellers to Bhutan and includes visits to major attractions and landmarks.

10-Day Discover Bhutan includes major attractions and a visit to Bumthang, the Valley of Beautiful Girls, which is also a religious centre of Bhutan.

11-Day Jomolhari Trek is for adventure seekers, taking them to the base camp of one of the most renowned peaks in Bhutan, Mount Jomolhari, the sacred abode of the female guardians of Bhutan 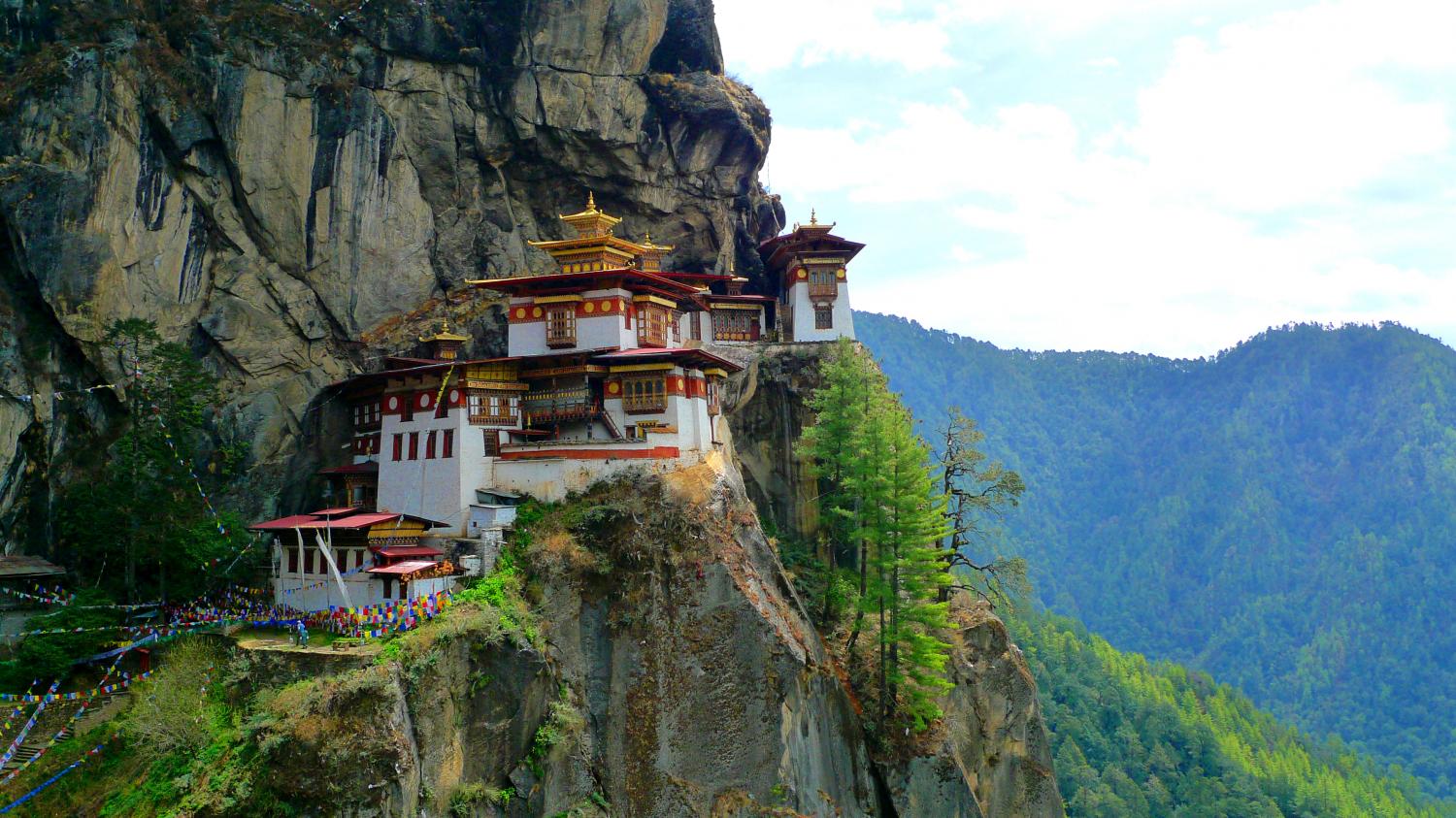 There are many accommodation options, but for those after a more luxurious experience, the Six Senses properties are the way to go. Three are currently operational, with two more set to be up and running by the end of the year. Note that your choice of accommodation may affect the base spend of $250 a day. 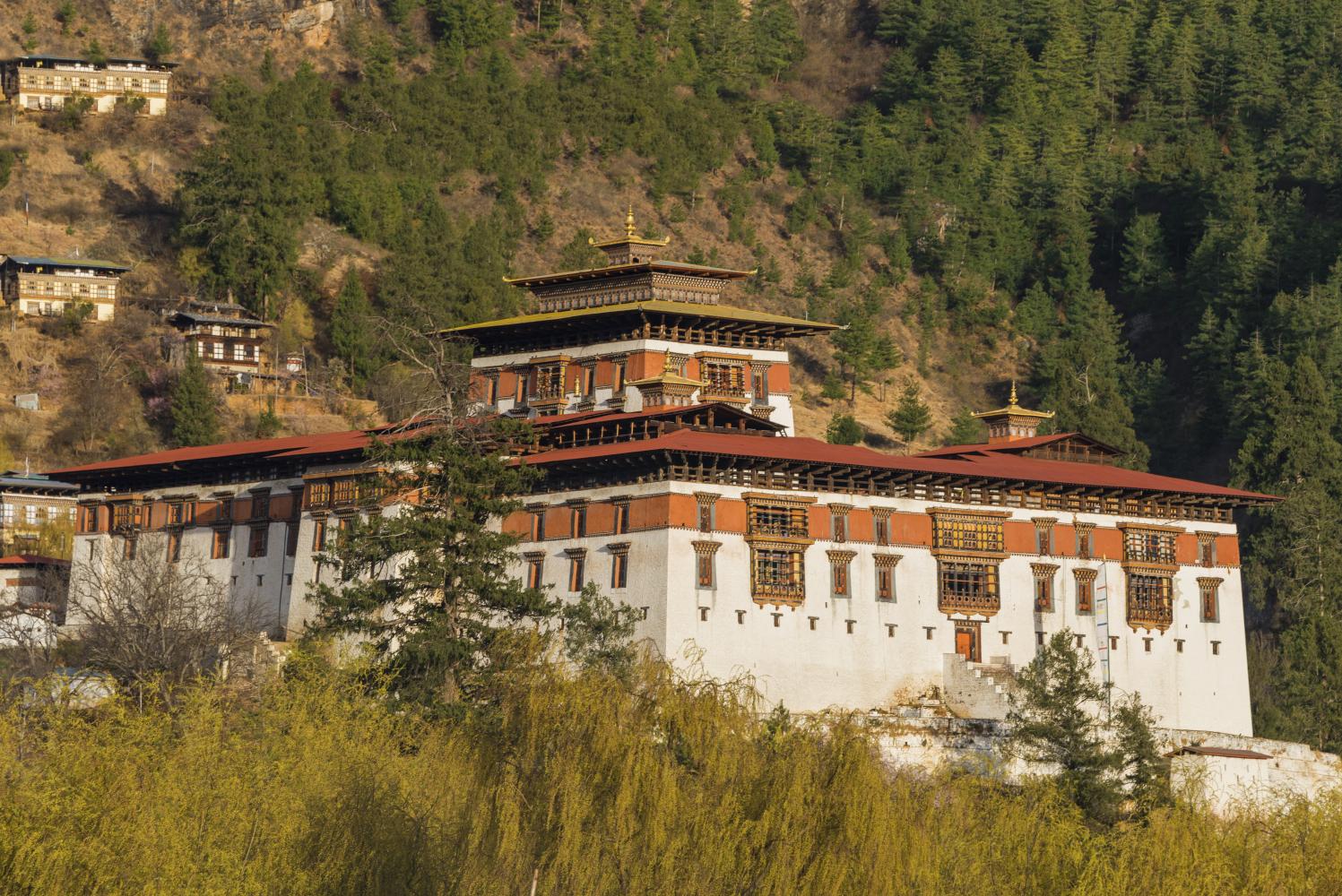