published : 10 Oct 2019 at 04:01
newspaper section: Life
writer: Pongpet Mekloy
In the age of social media and ubiquitous selfie, the view of verdant rice fields has become a major tourist draw for many locations across the Kingdom. This area south of Wat Tham Sua (seen atop the hill in the background) is one of the most famous destinations for the new generation of Thai visitors to Kanchanaburi. This photo was taken in October last year from one of the coffee shops along Road 6067, which benefits from this beautiful sight. Keep in mind that after November when all the rice has been harvested, the scenery will be completely different.

Not so long ago, Kanchanaburi's Muang district, which is just a two-and-a-half hours' drive from Bangkok, was seen by many as a mundane destination. And the adjacent district of Tha Muang was nothing more than just another place to drive by. But thanks to the popping up of new photogenic attractions in an area that straddles these two neighbours, Kanchanaburi has regained its prominence on the tourist map.

Wat Tham Sua, the Giant Rain Tree and Meena Café are now Kanchanaburi's most famous attractions, especially among Thai holidaymakers who make up the majority of tourists in the province. Search for Kanchanaburi in Thai, and the photographs of these places will be the first to show up on your screen.

All these new tourist draws are located south and southeast of downtown Kanchanaburi, on the other side of the Mae Klong River. The area can be conveniently accessed via its namesake bridge. But guess what, it actually has more to offer than those popular places. Around and in the majestic, but surprisingly nameless, limestone mountains that serve as an unmistakable natural landmark are several temples, caves and scenic lookout points, most of them still unknown to general tourists -- not to mention undiscovered sites with the potential to become niche attractions for nature lovers and those with adventurous minds.

Even the roads that run around the mountain and in nearby areas seem nice for cycling. Obviously, I wasn't the only one who thought so. Later in the evening, while checking out a hilltop vantage point called Tham Kaeo Kanchanaphisek, I ran into a group of cyclists who were taking in the nice view of the Mae Klong River below, a sweet reward for the taxing climb.

If you haven't been to this part of Kanchanaburi and would like to have some more nice pictures for your social media, it's time to plan a trip there now. 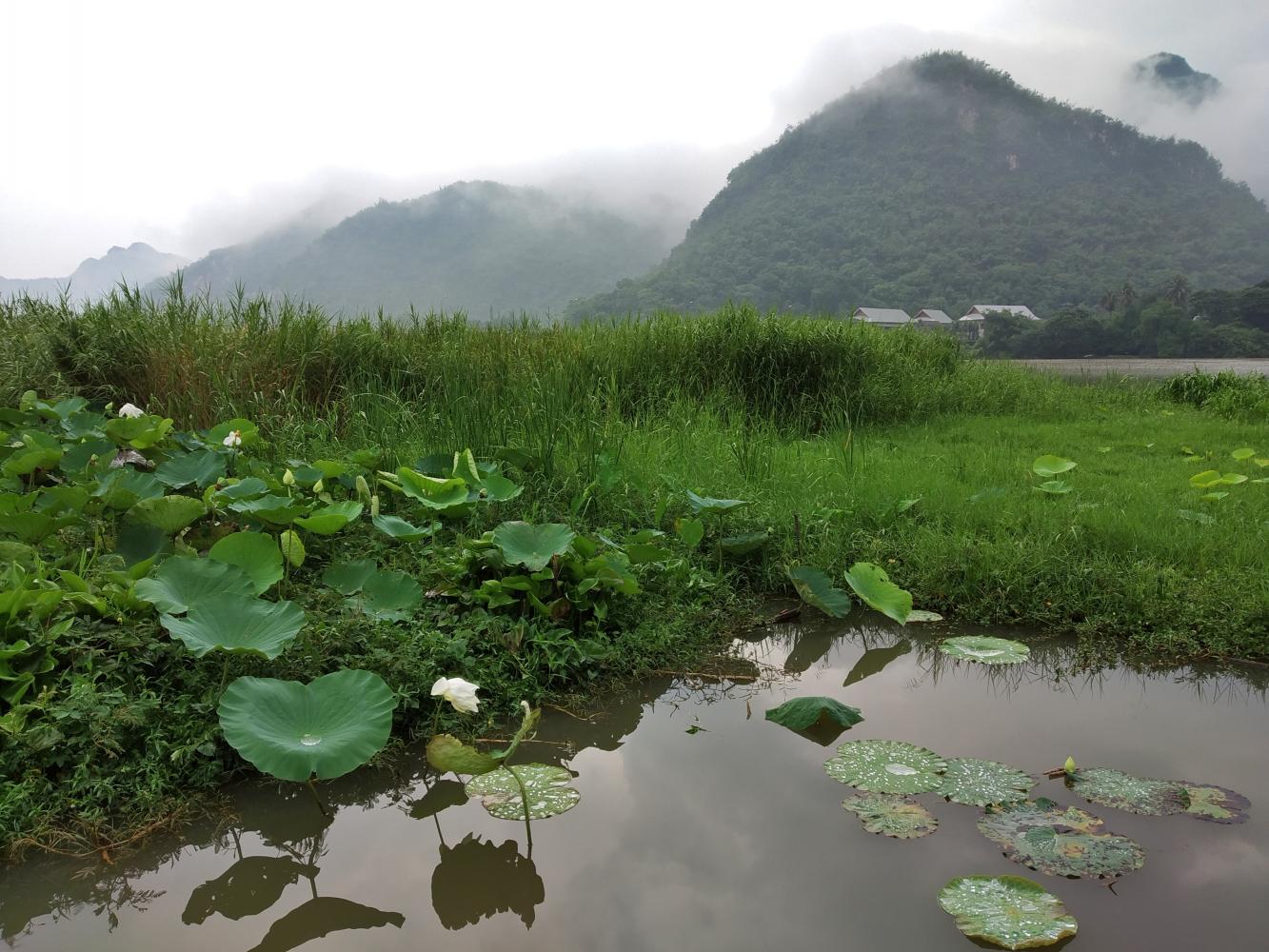 Not far from downtown Kanchanaburi, there are many waterside restaurants, coffee shops and resorts along the Mae Klong River and its tributaries — Khwae Noi and Khwae Yai — where you can relax and soak in a peaceful natural surrounding like this. 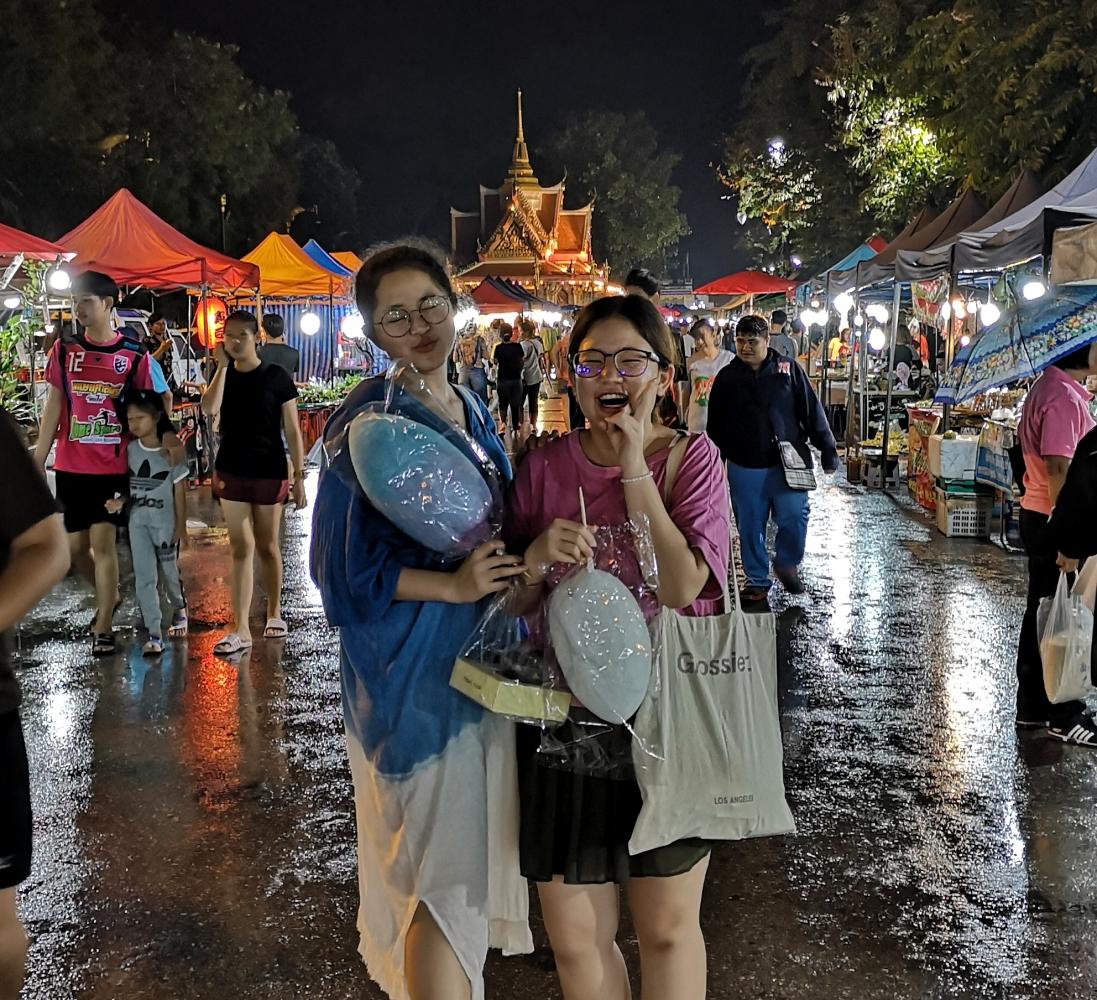 Every Saturday, from 4pm to about 10pm, the Pak Phraek area near the City Pillar Shrine becomes a walking street with lots of food and goods on offer. If bargain shopping is your thing, make sure you visit Kanchanaburi on the right day of the week. Chantiya Potayarom 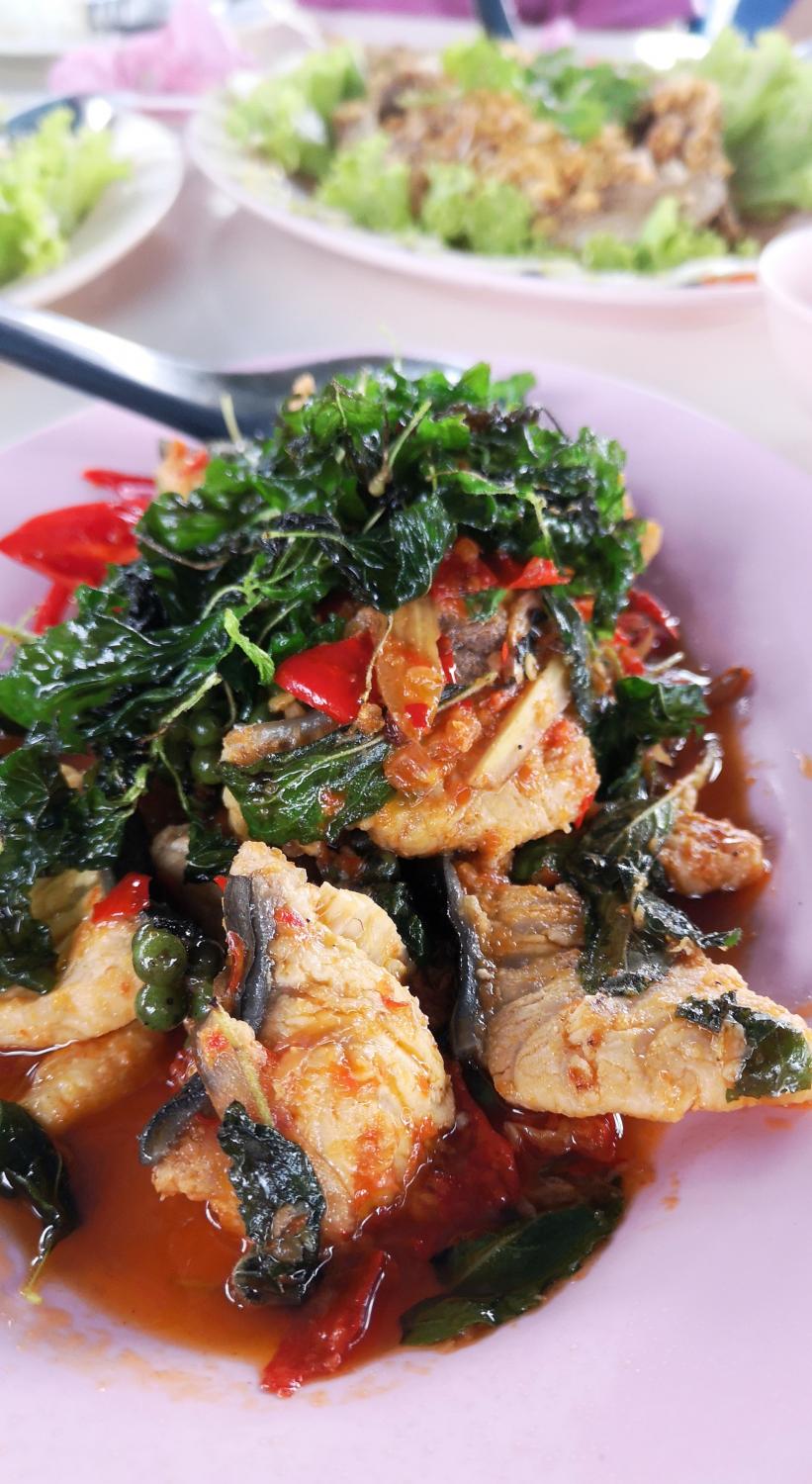 With its rivers and reservoirs, a highlight of Kanchanaburi and its neighbouring town of Tha Muang are spicy Thai dishes made with freshwater fish. There are several waterside restaurants that boast such dishes on the menu, from tom yam to pad cha, pad prik and more. And, yes, they usually have different kinds of fish for you to choose from. 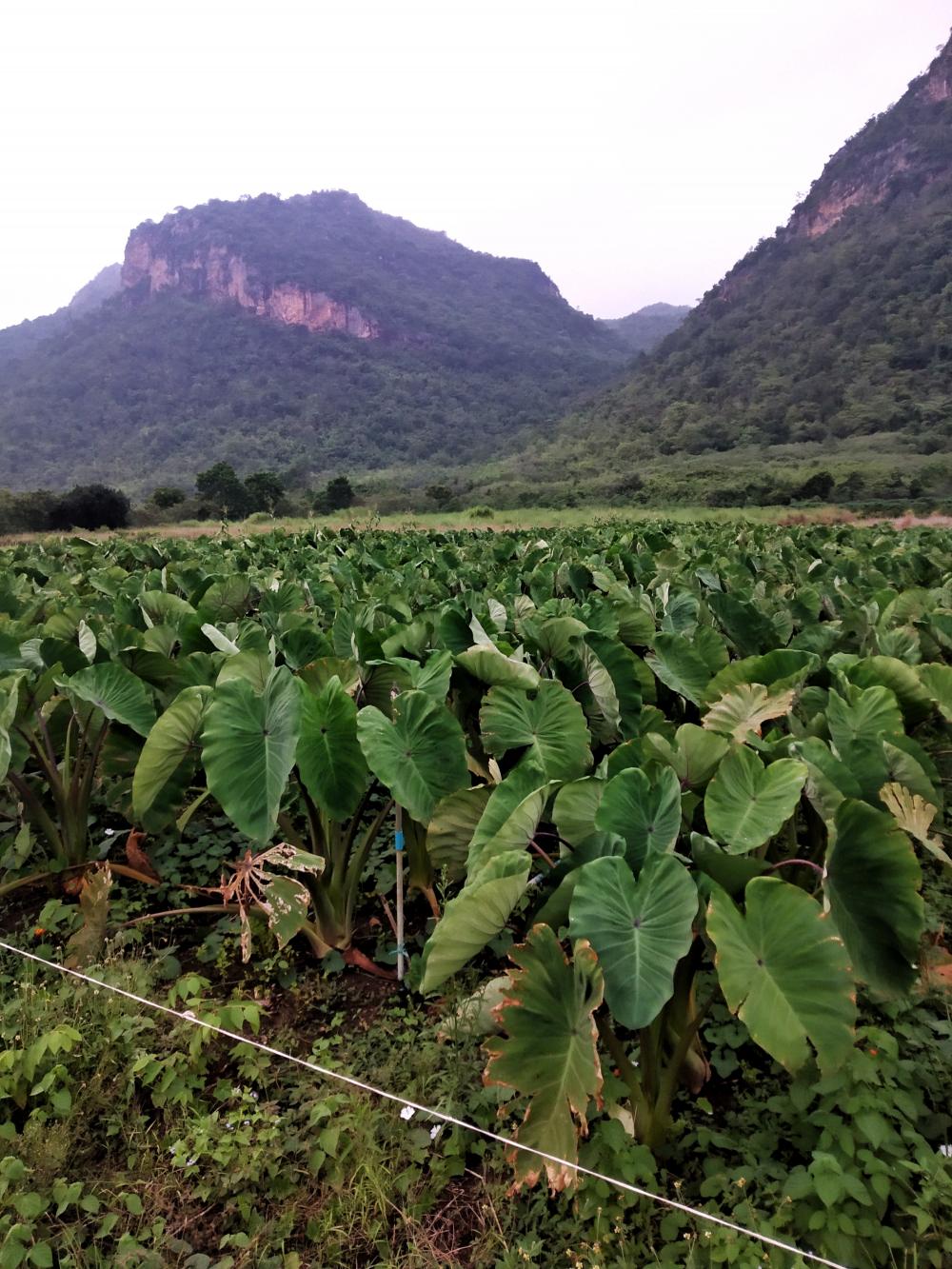 Venturing onto a dirt track on the other side of the mountain from Wat Ban Tham, I found this huge taro plantation. I'm certain not all of those who have eaten taro have seen the plant. Well, this is what it looks like. 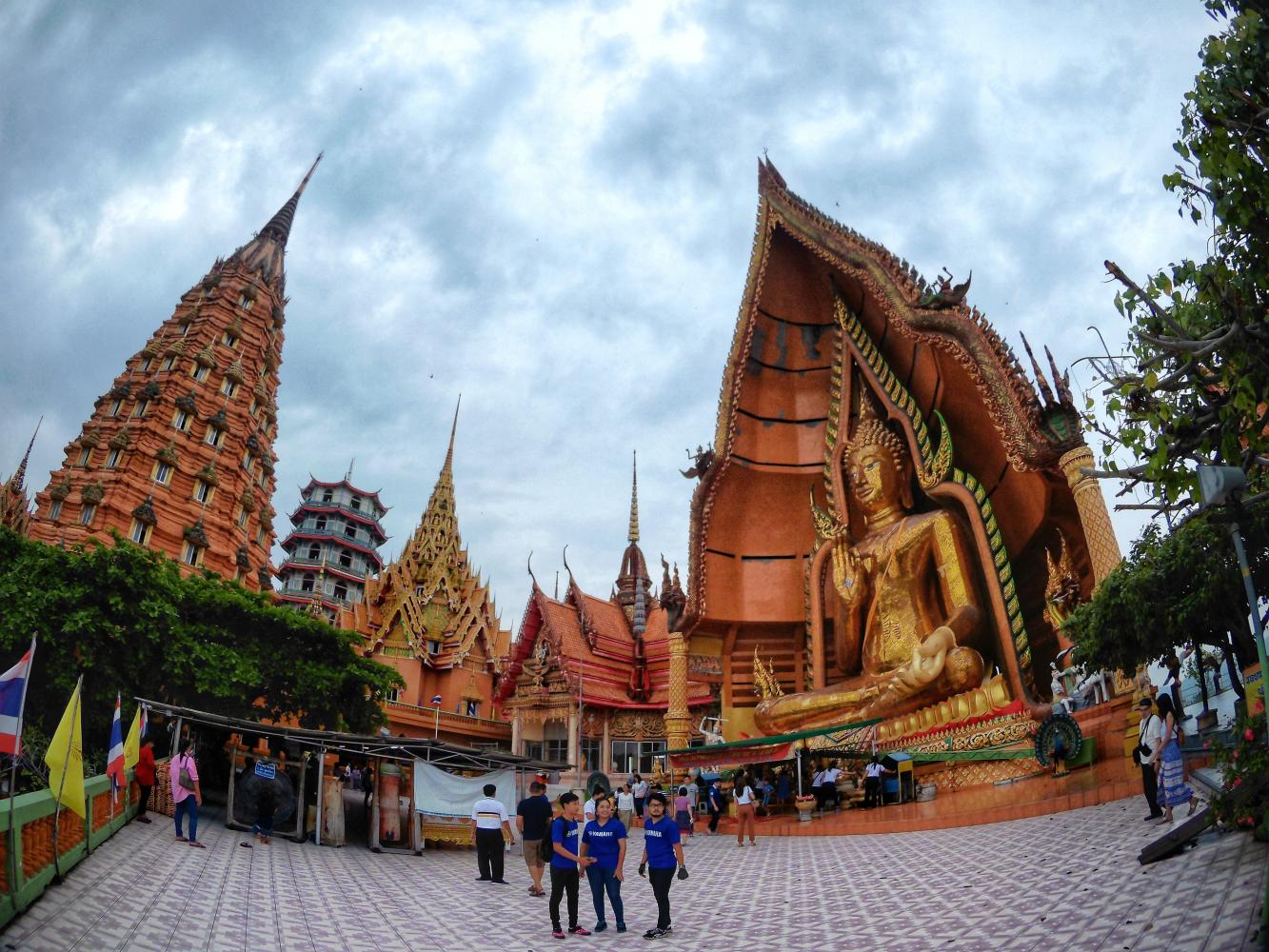 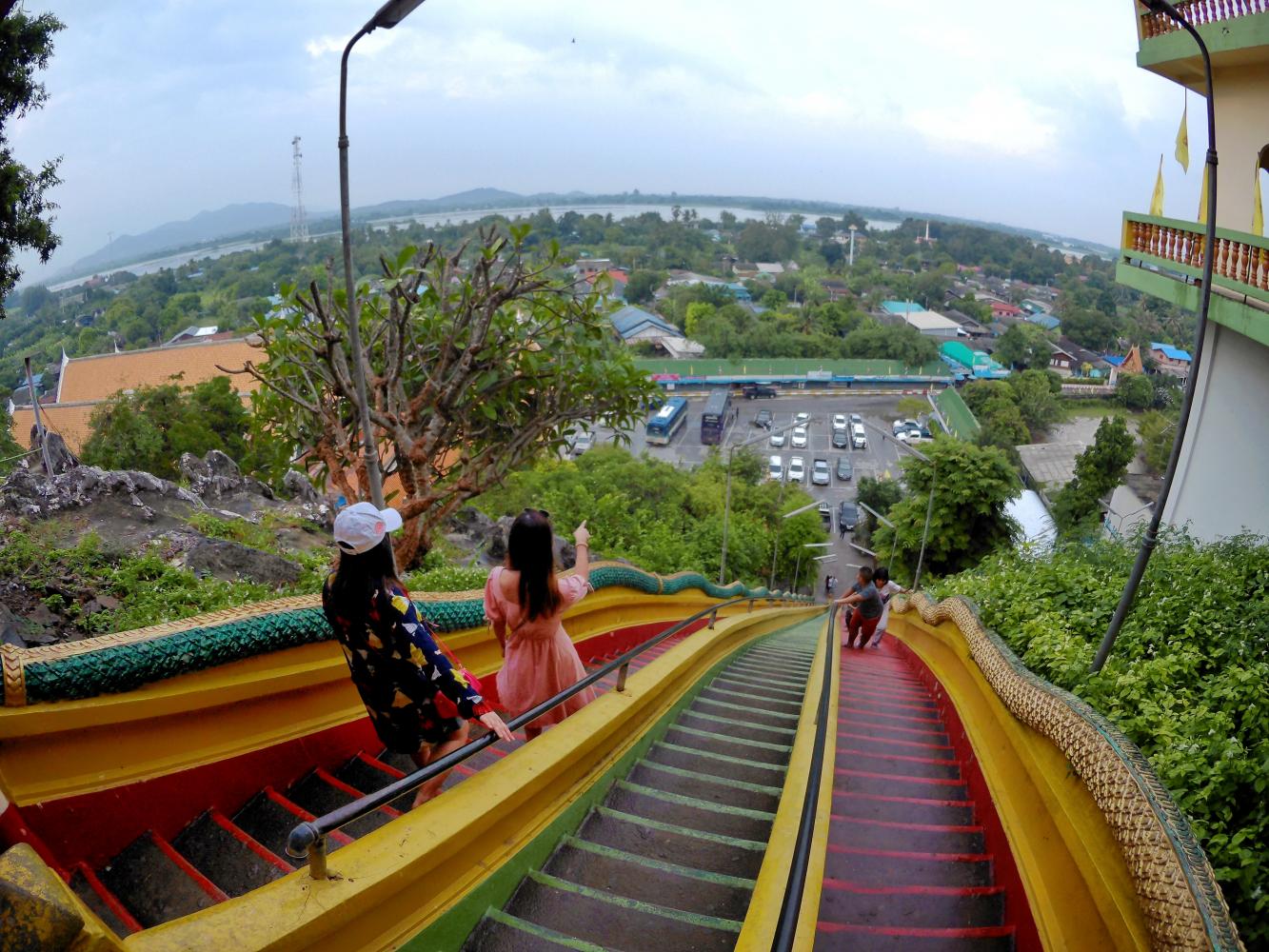 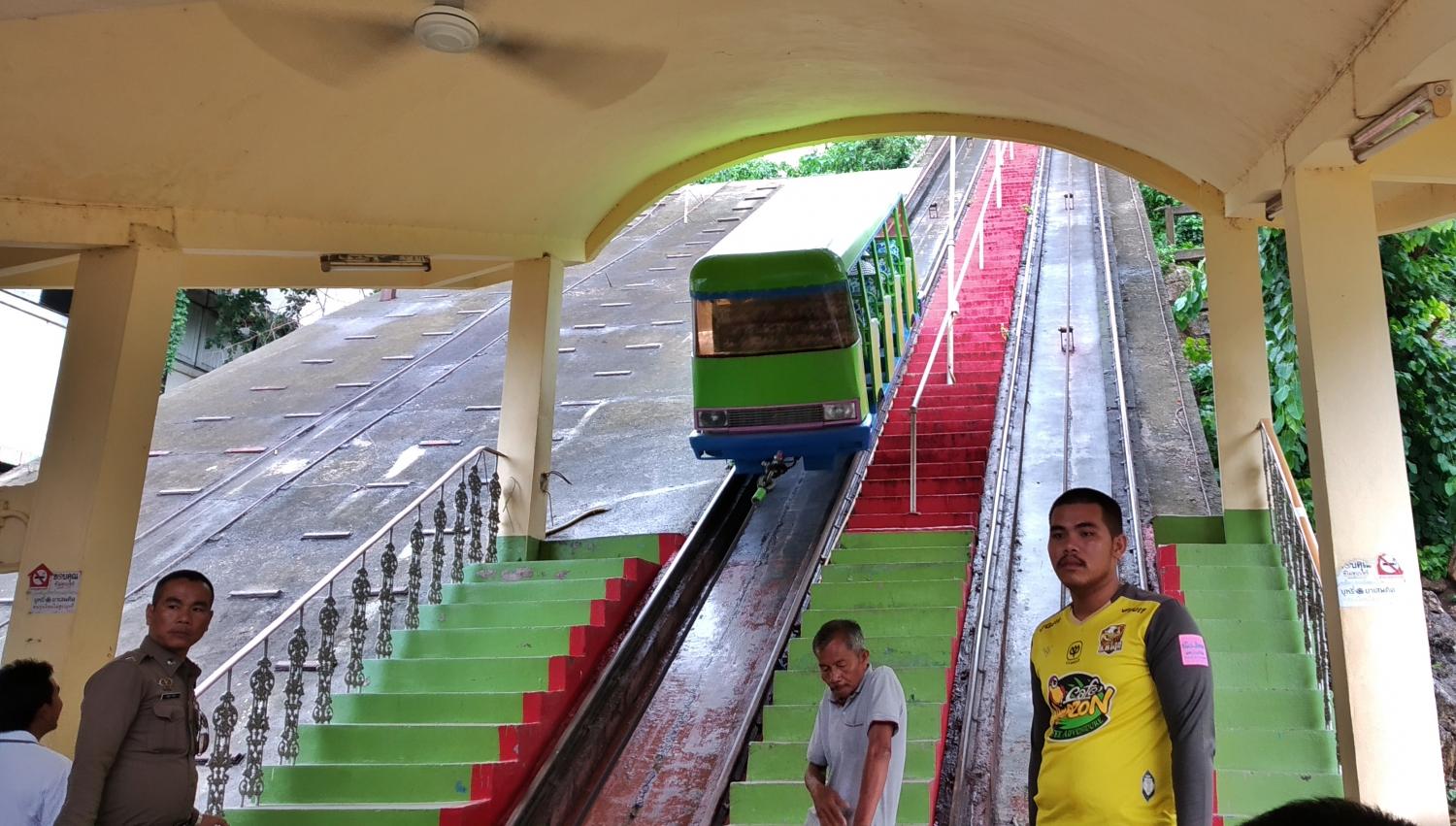 Perched on the top of a hill, Wat Tham Sua is made up of elaborate structures that make it an unmistakable landmark in this part of Kanchanaburi. The temple also commands sweeping views of the surrounding areas. The Mae Klong River can be seen from the north side. There are three ways to reach the peak. You can either pay for a ride on the cable car or save the money and walk your way up via either of the two sets of staircases. The straight staircases (shown in one of the photos) are shorter but very steep and climbers are completely exposed to the sun and elements, while the winding staircase is a little longer but a lot less steep and flanked by shade trees. Of course, you can use one on your way up and the other on the way down if you wish. 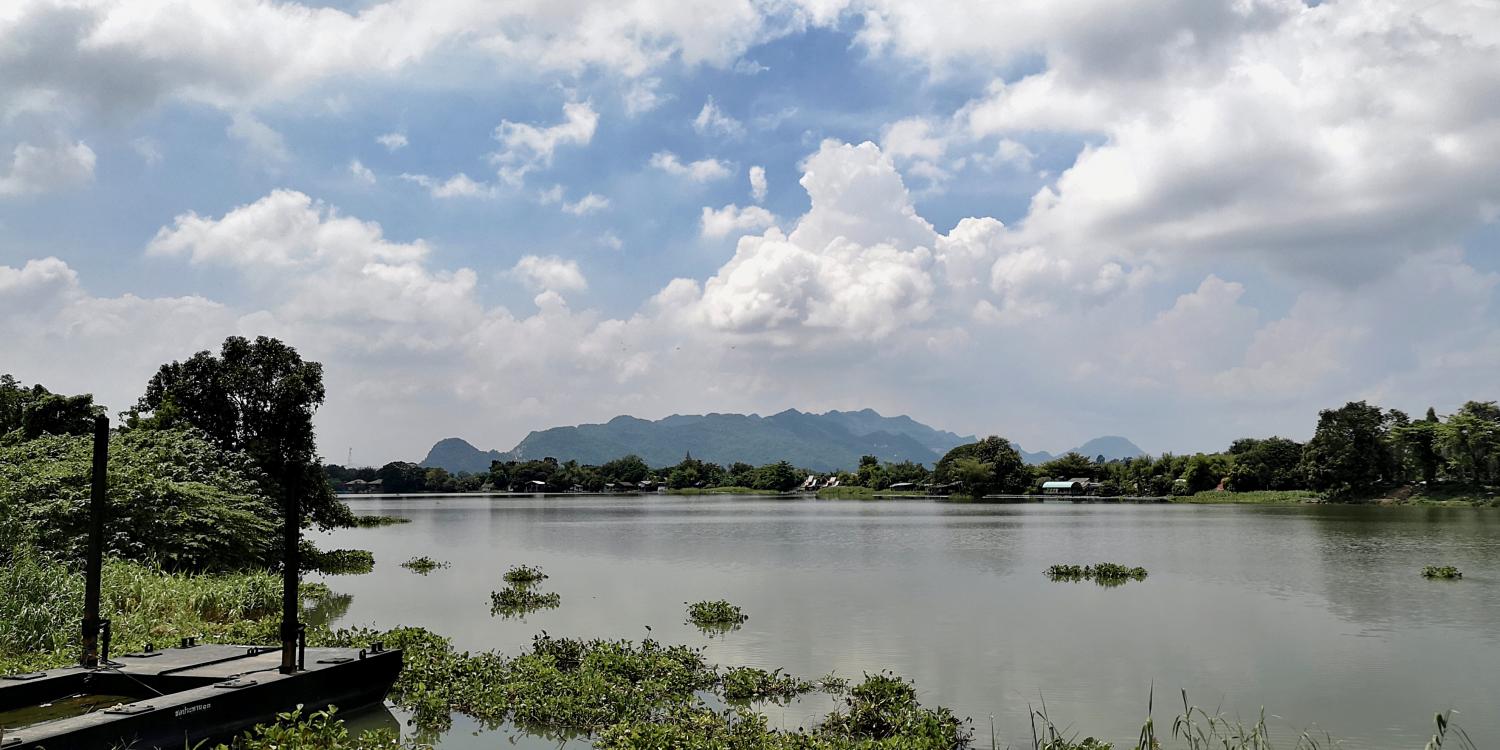 This swollen part of Mae Klong River is a result of its namesake dam. The water from here not only irrigates farmlands in the Mae Klong Basin downstream, but part of it is also diverted to the capital to make tap water for Bangkokians. By the way, that limestone mountain in the background is where Tham Kaeo and Wat Ban Tham are located. 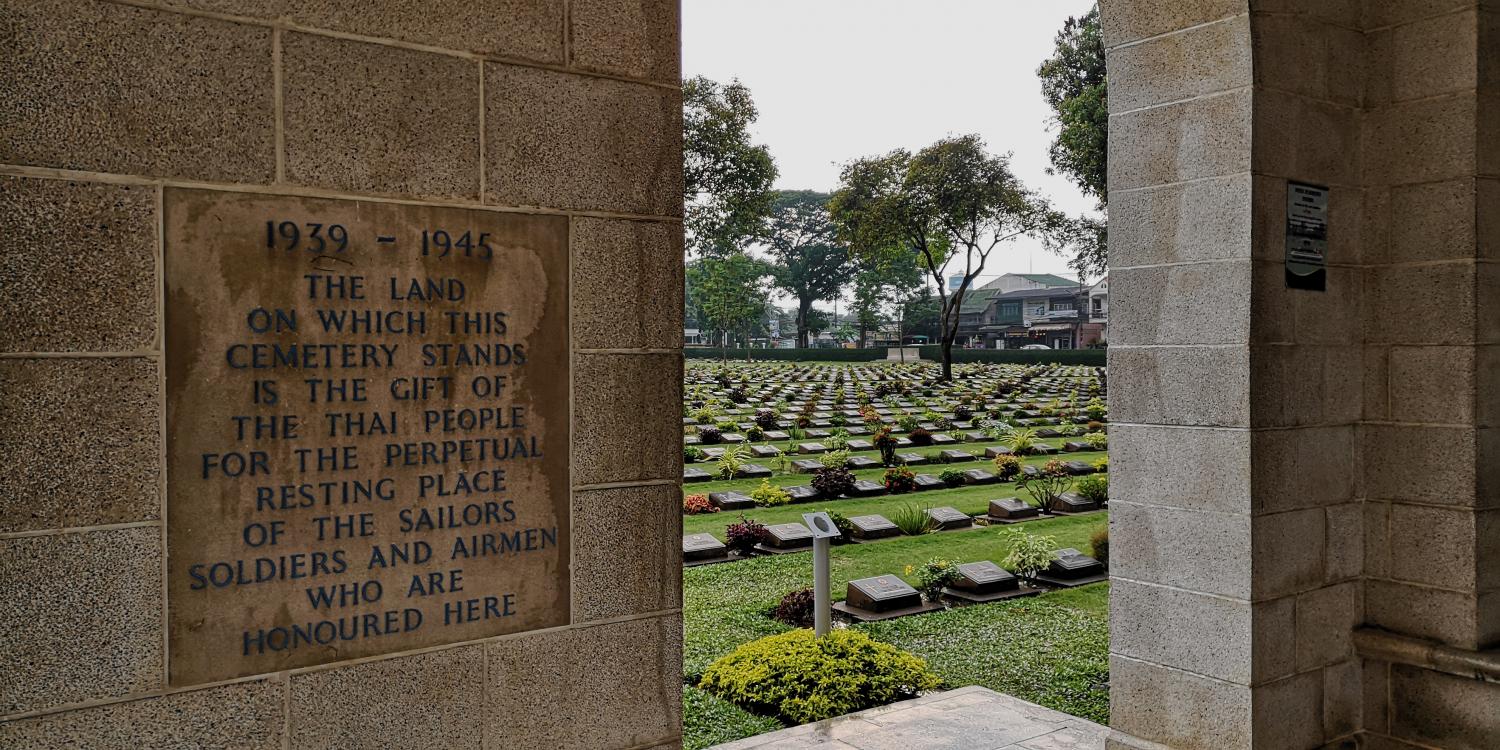 To many international tourists, Kanchanaburi is synonymous with the railway bridge made world famous by the 1957 film The Bridge Over The River Kwai. The bridge, the War Cemetery and museums dedicated to World War II may sound like clichés but they are still well worth a visit. 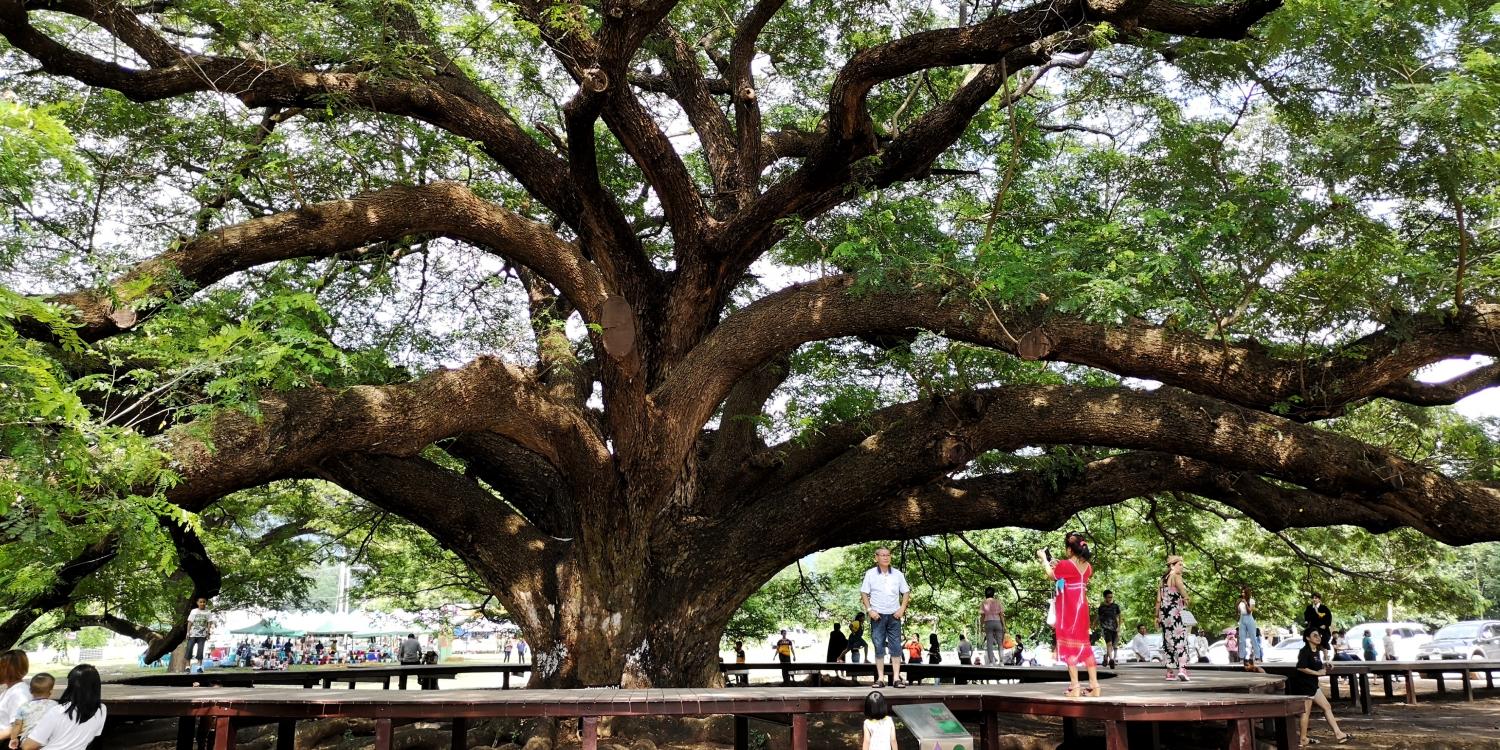 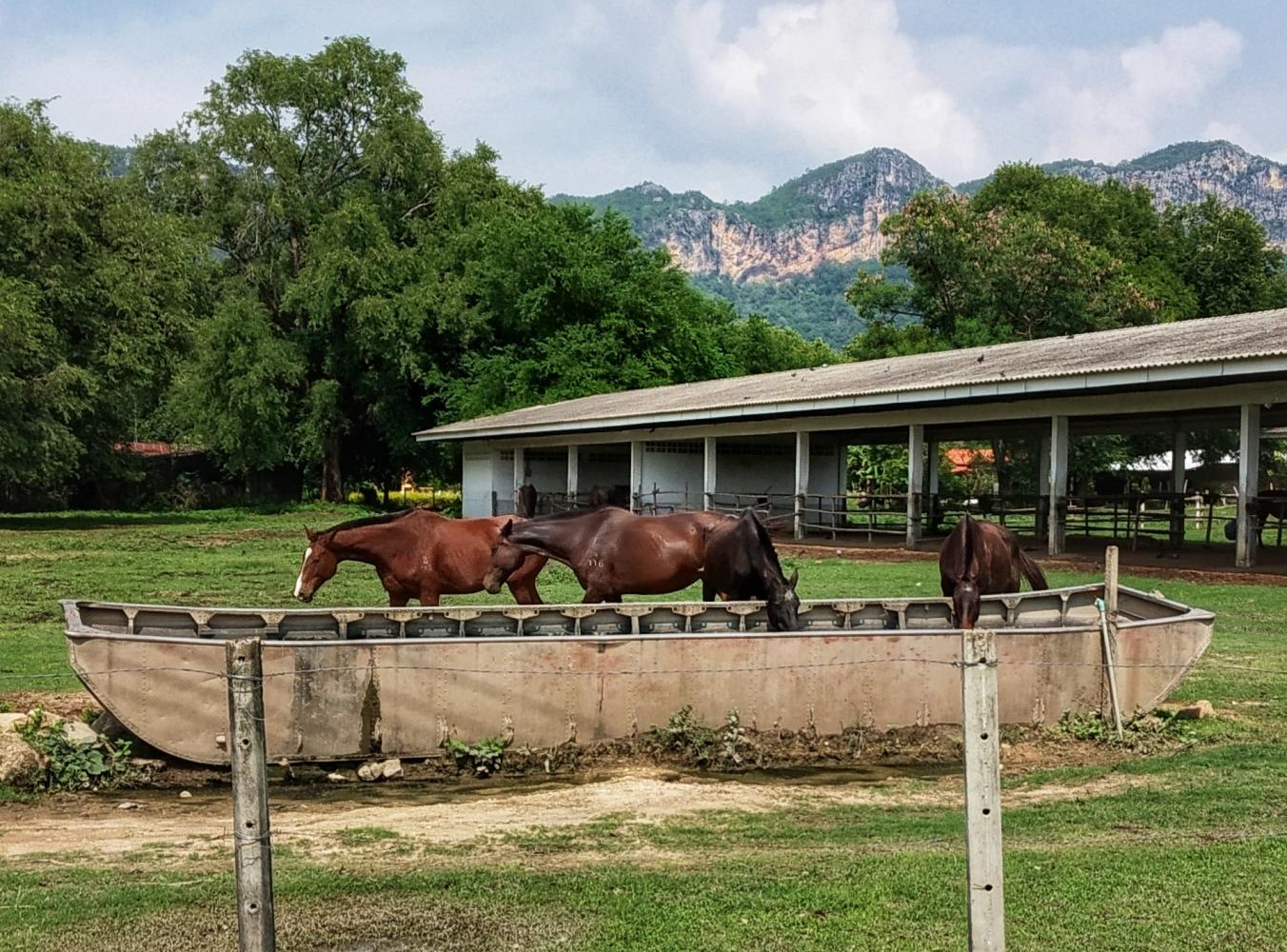 With an expansive canopy of over 50m in diameter, this gigantic rain tree is now another tourism icon in Kanchanaburi. The majestic tree stands in the land of the Army's Livestock and Agriculture Division where horses and other animals are raised. Visitors are welcome every day, free of charge. Chantiya Potayarom 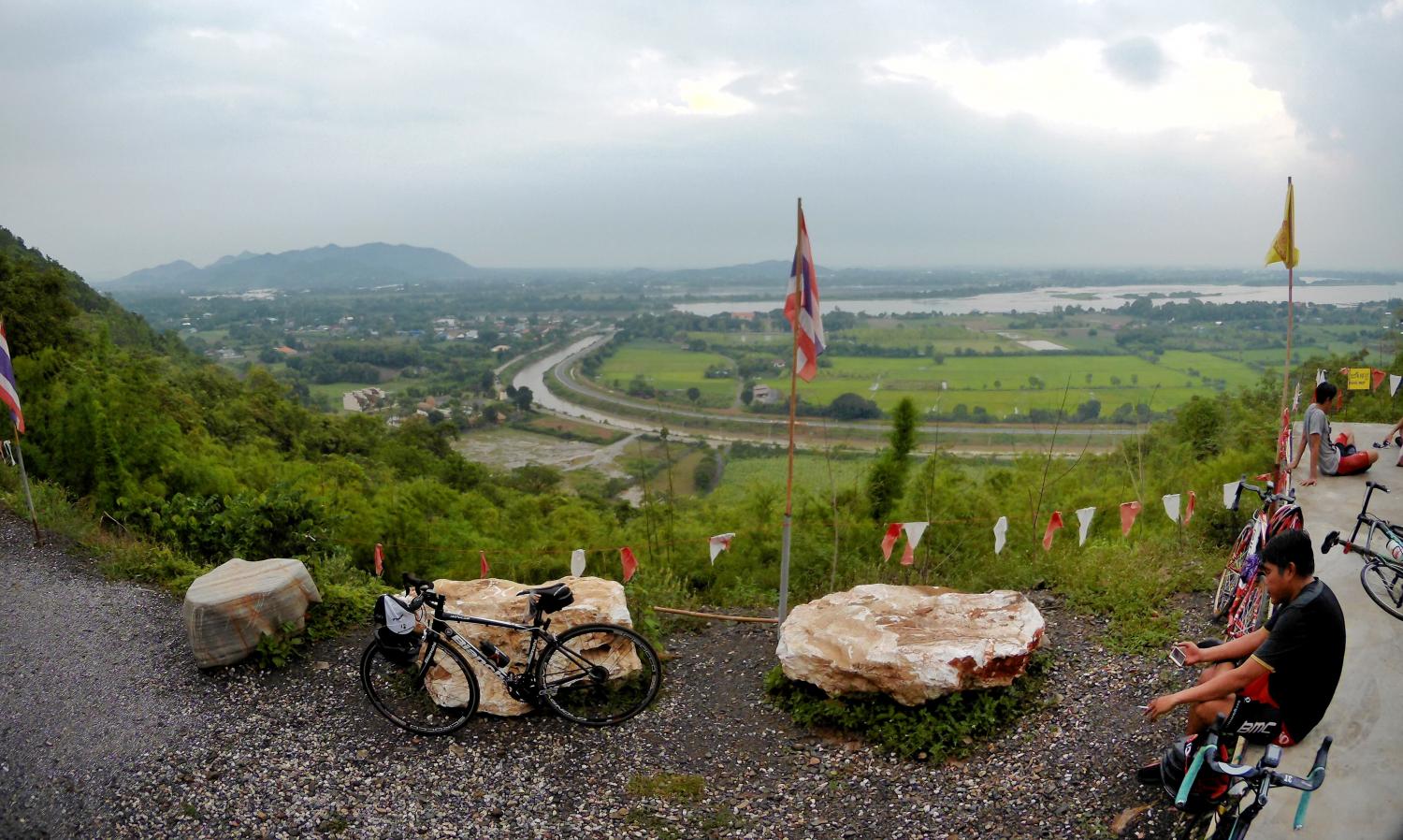 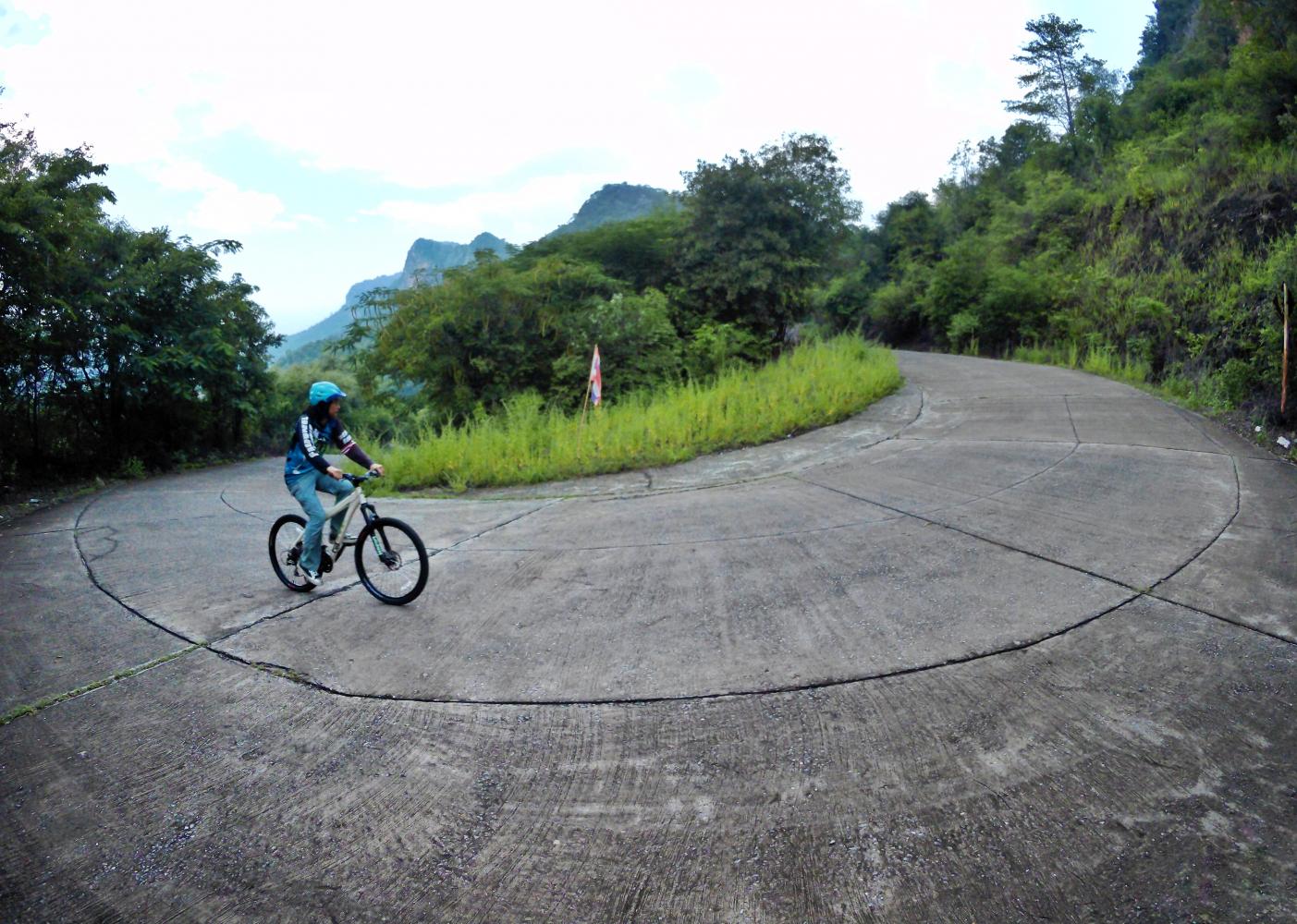 Tham Kaeo Kanchanaphisek is located on the same mountain as Wat Ban Tham, but at the eastern tip. The lookout point here is the only one in the area that can be reached by road. 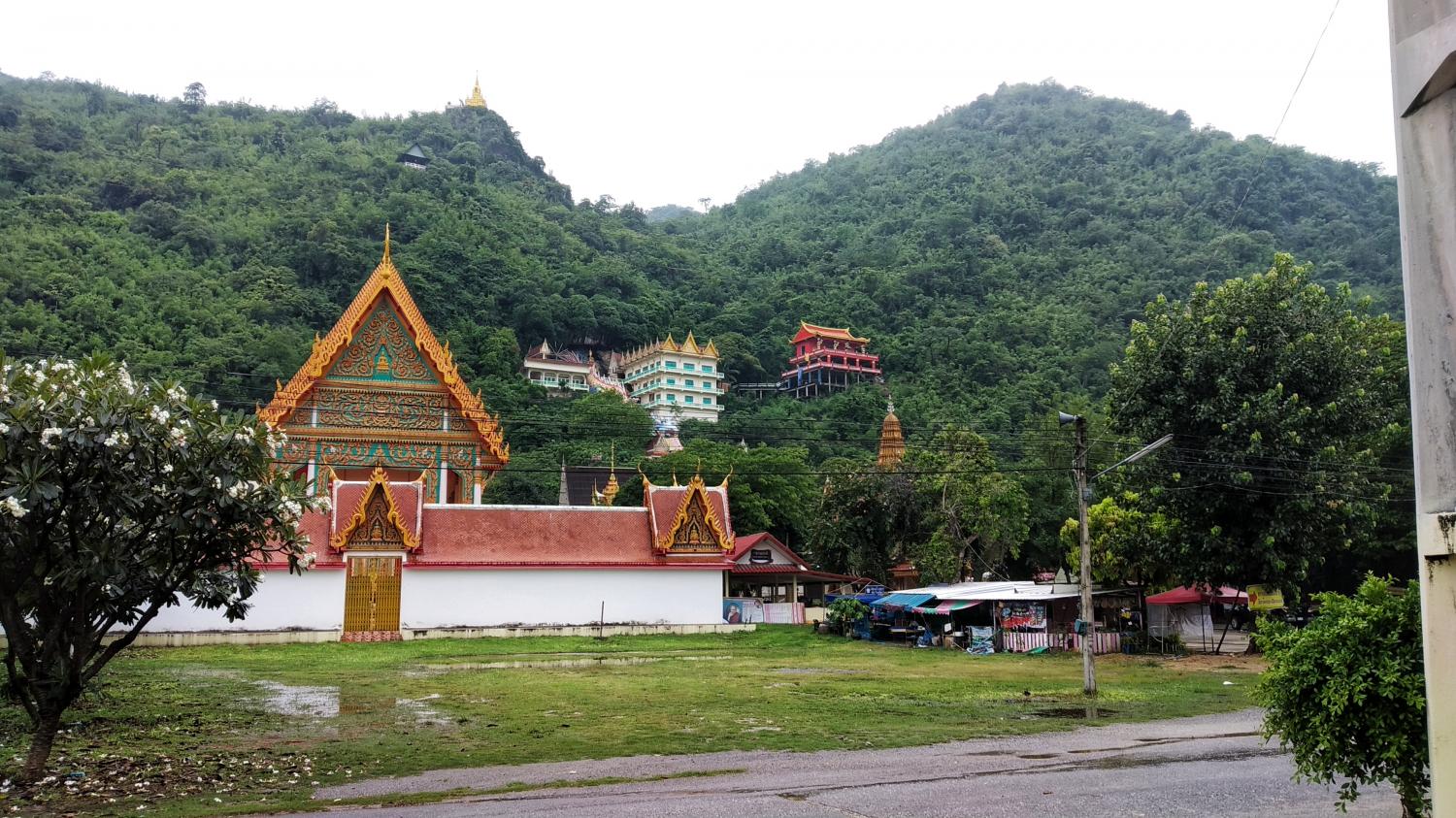 Wat Ban Tham is another temple with a lookout point over the Mae Klong River. It's not as popular as Wat Tham Sua about 4km to the east, partly because the climb is several times longer and the view at the top cannot be enjoyed in every direction. However, the hike is good for those seeking some adventure since along the way they will find fascinating caves and wilderness. 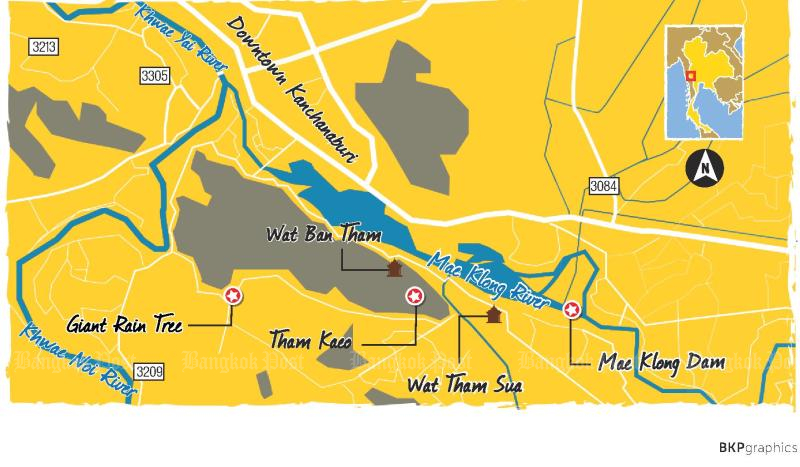