New technology and old people don't go well together. At least, that's the stereotype. But try telling that to 76-year-old Pramjit Smitaman, who is spending her afternoon with eight friends learning about video editing using GoPro Quik at the OPPY Club.

The class has a lively, friendly, fun atmosphere. The teacher has an easy rapport with the elderly students, who can follow the instructions without any trouble. This isn't their first time learning how to use video editing programmes, either. They are also familiar with other applications, such as iMovie.

"I like to take photos and videos. I started learning video editing because I created a video for my niece's birthday and she really liked it. That encouraged me to learn more. I have learned how to use several applications at the OPPY Club. The classes are casual and fun. The handbooks are detailed. The teachers are great. They can answer all the questions I have," Pramjit said.

Pramjit is among 11 million people over the age of 60 in Thailand. As of February this year, according to statistics from the Department of Older Persons (DOP) under the Ministry of Social Development and Human Security, Thailand is an ageing society. The country is predicted to become a fully-fledged aged society in 2031 and a super-aged society by 2050, with 20% and 30% of the total population being over 60, respectively. With such a large proportion of elderly citizens, Thailand must be prepared.

Established in 2000, the OPPY (Old People Playing Young) Club is managed by the OPPY Department of Loxley. The club aims to promote computer literacy in people aged 45 and above, and encourage them to feel confident in their use of new technology. Different courses at the OPPY Club have been introduced over the past two decades to meet members' demands and interests.

Initially, for instance, the club only offered courses on how to use computers, digital cameras and the internet. Now, in addition to teaching learners how to use smartphones, social networking sites and applications, there are classes on more complicated skills, like video editing and e-commerce. This month, there are courses on how to use Google Maps, Facebook, Pinterest, Instagram, Line Camera and Quik.

"Quik is an application which features easy video editing techniques. It is has several functions. We told the students to include their strong points in their videos. For instance, one member created a video about dogs because she is a dog lover," said Suteera Chamlongsupalak, assistant vice-president at the OPPY Department.

"We decided to teach Quik after introducing a class about short movies. Making short movies was too difficult for the elderly students. In class, they learned how to create storyboards, but didn't shoot a movie themselves," she explained.

Most classes at the OPPY Club are attended by female members, but the video editing classes attracted a number of men as well. One of these was Soocharit Kwaengsobha. 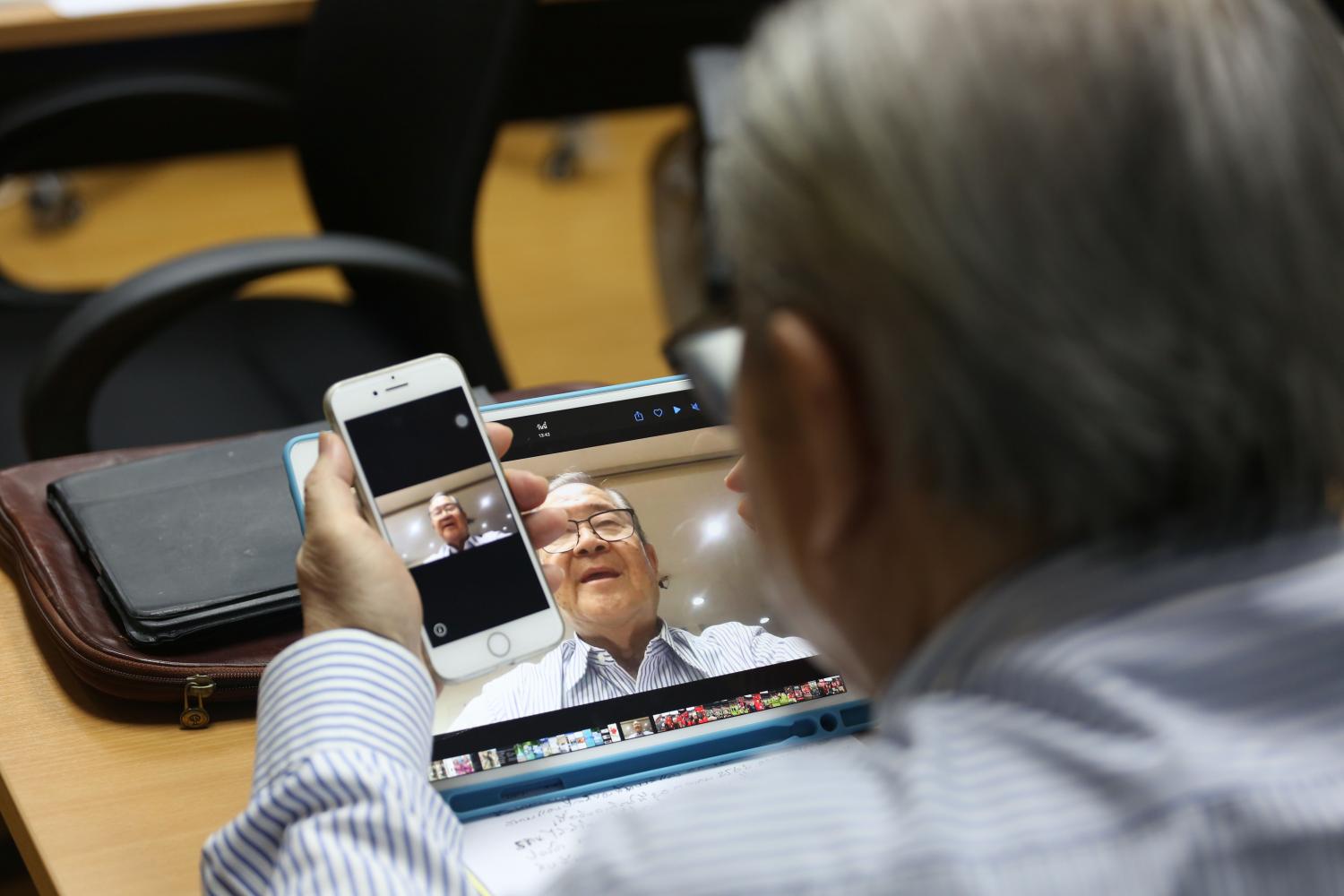 An OPPY Club member familiarises himself with some gadgets.

"My first class at the OPPY Club a decade ago was a basic computer class. I'm interested in editing photos because sometimes photos don't come out as I expect and editing programmes can help to adjust them," said the 72-year-old.

"I enjoyed the short movie class the most. It was my first time learning how to create a storyboard. I had to draw detailed pictures so the cinematographer could understand my ideas. For me, Quik is easy to use, but I have to use it often, so I can remember its functions accurately."

A teacher at the OPPY Club for almost two decades, Suteera found that the elderly students are able to learn and understand any software if they have some basic knowledge of it beforehand.

"Nothing is too difficult if they have been through a foundation course," she said. "At the OPPY Club, enjoyment is the first priority. We don't concentrate on academic knowledge because it can make elderly students feel stressed.

"When we have a new member, everyone welcomes them warmly, so they feel comfortable in the class. Our oldest member is 92. He is fine, but we have to repeat the lessons to him very often because his memory isn't great. We also have members under 45 years of age. They come to the club because they couldn't find the courses they wanted elsewhere. Some of them thought they were slow learners."

In order to make members happy, teachers are willing to help them whenever they need it. Pramjit confessed that she often contacts teachers when she has problems with her studies, even if it's at 10 or 11pm at night.

"This is probably our biggest strength," Suteera said. "We are like a family. We understand that they often don't have anyone else to rely on. Teachers must take care of them like they're relatives. I've told them that I go to bed at 9pm. But sometimes, if they can't sleep because they are worrying about one thing or another, I'll help them out. It's very important. I can't leave them feeling lost."

In the process of developing competent tech skills, many members become addicted to applications and gadgets. To address this issue, the OPPY Club offers other activities to reduce their gadget time.

"Some were spending up to eight hours on Line or Instagram, until they had neck pains and trigger fingers," Suteera said. "We started a watercolour painting class four years ago. We have cartoon drawing classes, Chinese painting and singing classes. We also have dance classes because some members told us that dance can reduce the risk of developing dementia. One member said she stumbled less and could walk better after taking the dance class."

Tech skills remain at the heart of the OPPY Club, however. And the next step is to train members to become YouTubers and bloggers.

"Their knowledge is useful. Soocharit is a volunteer guide at the National Museum Bangkok. He knows a lot about history," Suteera said. "Another member is a mechanic, who wants to share tips on how to repair cars and other machines. We have a dressmaker who wants to pass on her sewing techniques. We may let them create two-minute videos and post them on OPPY's YouTube channel, then see what kind of feedback we get."

Soocharit said he'd just learned about blogging the previous week. He enjoyed writing a blog, but he found it difficult to post photos, especially vertical ones.

"I love reading, so I wanted to try writing. But my typing is very slow, so it took a long time," he said. "And when I posted vertical photos, they didn't come out nicely as I thought they would. I may get better. Let's see."

Overall, Soocharit is highly satisfied with the activities that the OPPY Club has to offer. And he hopes all elderly people in Thailand will be given similar opportunities.

"Thailand will become an aged society soon. Not everyone can attend classes here, so many people are missing out on the opportunity to develop themselves. It would be great if the government could open classes like this in other places, so everyone can attend them," he concluded.