Suan Phlu has always been a street food hub, though old-time expats may remember it as being the place for the Immigration Department. With the relocation of the department and development, the road has gone a bit more upmarket with cute coffee shops, bakeries, bars and fine dining establishments having set up shop, along with modern condos.

Though Olta is neither fine dining nor casual, it would fit the definition of a British gastropub, much to the disdain of chef-patron Jamie Wakeford. Swank interiors, complete with cubby holes behind velvet curtains for privacy and plush velvet seats, alongside a centre bar with seating, complete the look. Though the outdoor seating does give it more of a casual vibe.

This is not typical British cuisine of mushy peas and soggy fish and chips, this is a mix of Indian, British and other Asian thrown in. It is what present day Britain is: a mix of everything, but fit for the modern day. "We are trying to go for that British thing, but it is more of an interpretation of the ingredients around," emphasises chef Wakeford. 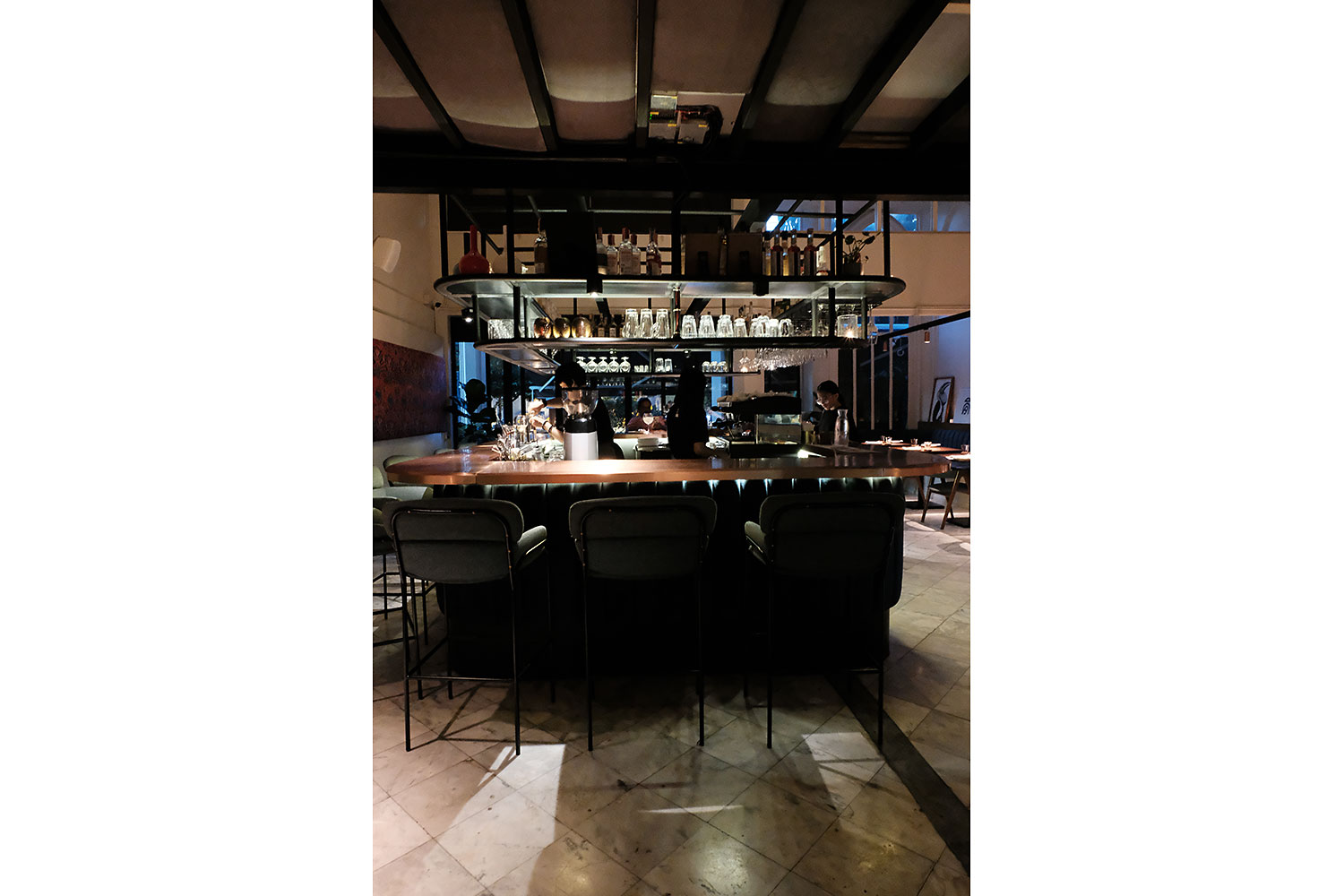 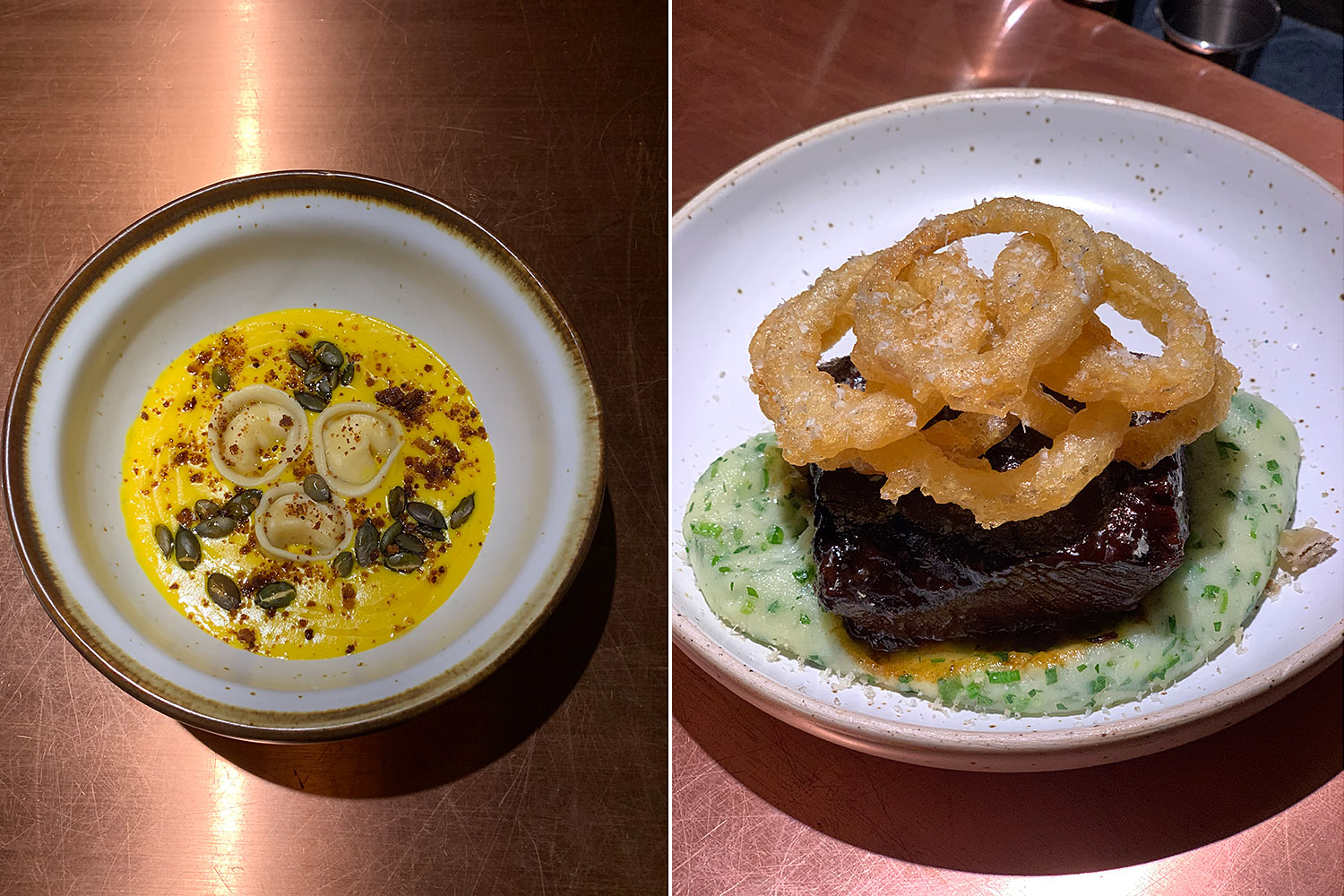 "I would say there is a real British theme to it. But then you can define British cuisine as northern European -- France, Spain and even Nordic. It's got gastronomy vibes and you can taste the technique on the plate."

It is best to start off with a classic British gin and tonic or OG tea (B330++), which is a good sundowner of Beefeater gin, earl grey tea, citrus and tonic. The bar bites menu also serves as appetisers and I paired the G&T with the IPO Irish oysters (1/3/6 pieces is B120, B330 or B640++), which are served with fermented chilli and onion.

The Fish finger sandwich (B100++) is a two bite squid ink bao, with sole fish and tartare sauce. The bun is moist though there is no mayo holding the fish fingers together. I haven't eaten fish fingers since I was a child and this took me back to that memory of the last fish finger ever eaten.

The Black kingfish crudo tartare (B320++) is a kobia fish tartare dressed in whey, lemon and river moss, served with compressed cucumber and celery. Super clean and super light.

The Cream cheese tortellini (B200++) is a delight to look at. The pumpkin soup the tortellini is served in is thick, creamy and lush, and is more of a puree than a soup. I'm not a fan of soups though the upcoming cold weather should warrant eating soup. (Pro tip: you eat soup not drink it). The pumpkin is sliced thin and sauteed with onion and garlic, cooked slow to render out the water it holds, so that it confits in its own juices. It is then blitzed to make a soup. The dish is served with roasted pumpkin seeds, gingerbread and a dash of curry oil for that extra flavour. Delish! 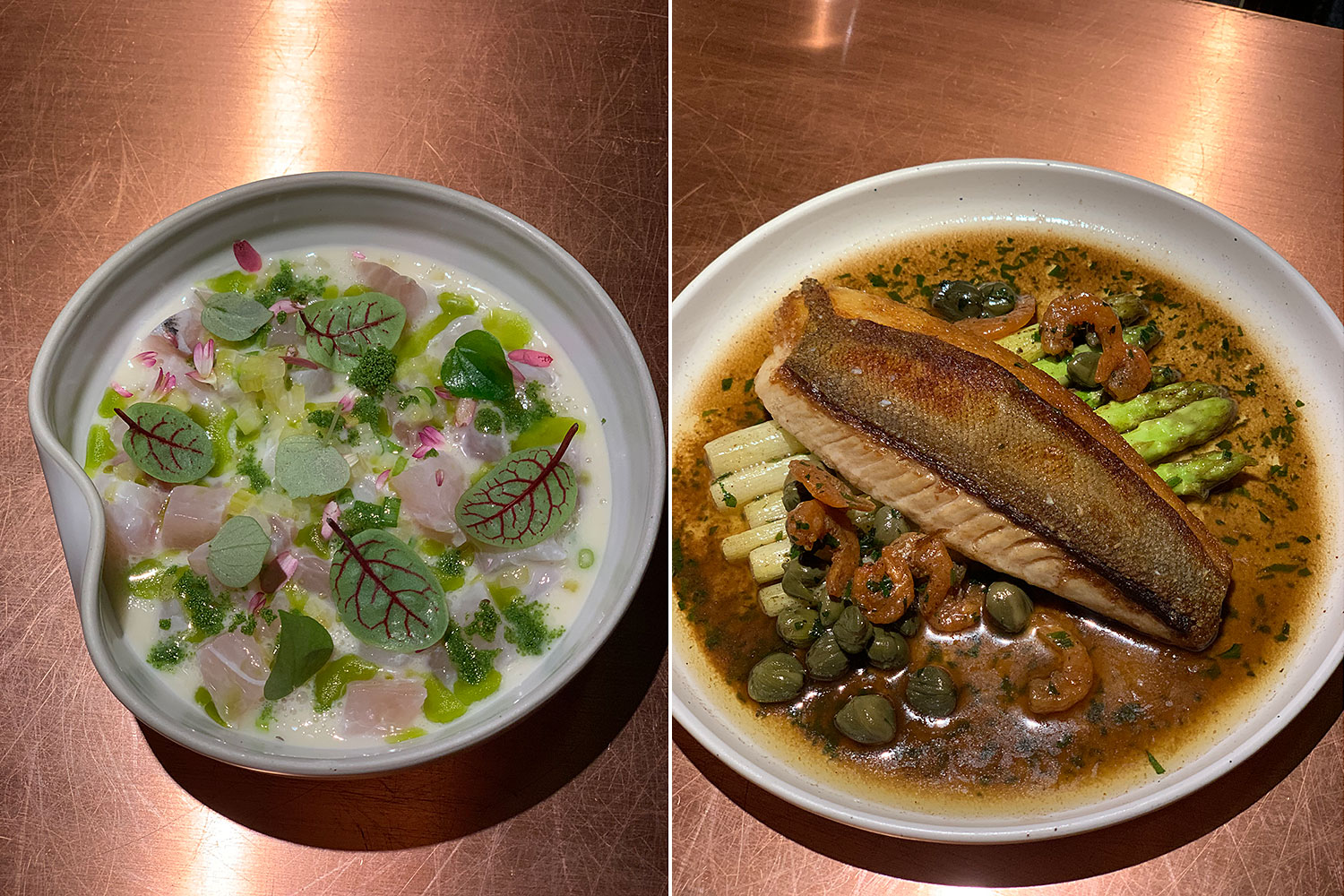 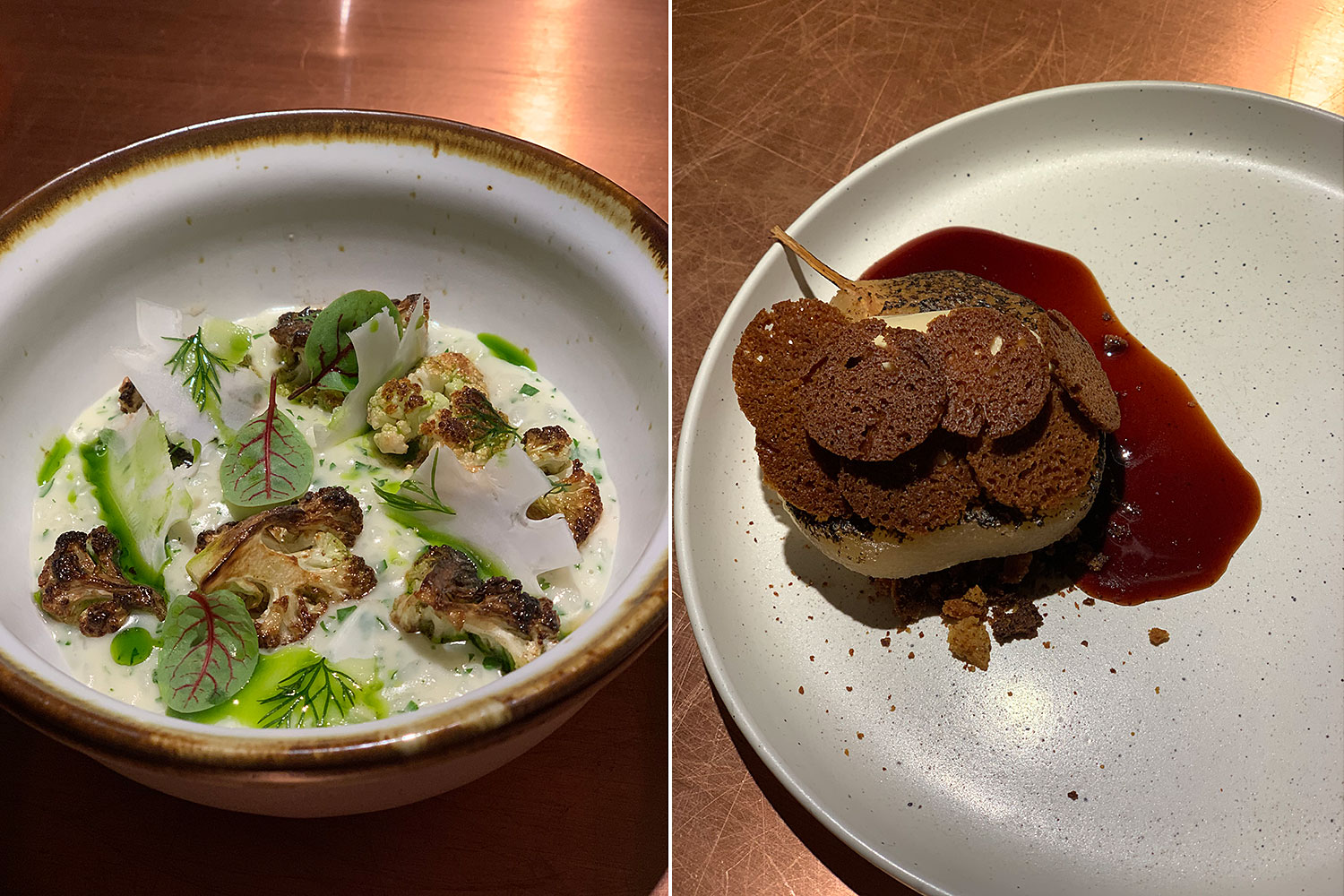 The Spiced grouper nuggets (B400++) are much like fish pakoras, except these have a beer batter. The chutney that accompanies the fish is coriander, yoghurt, mint, a spice mix and a bit of ketchup for that mainstream pakora sauce on-the-go. Served with lime and seaweed salt, the dish took me back to Indian monsoon days when a pipping hot cuppa was best enjoyed with hot pakoras. Though at Olta, I would recommend washing it down with a Rose tinted (B350++), a headly mix of OTT rosé and soda.

The dish that chef Wakeford can't get past and has been cooking for six years is the Cauliflower risotto (B500++). Instead of Italian risotto, he uses Japanese rice and cooks it in a white wine base. When the "risotto" is at 95%, he adds two teaspoons of cauliflower puree and a block of Parmesan. The rice comes with raw cauliflower florets and butter-roasted cauliflower, its roots and sorrel leaves. It is finished off with a drizzle of dill, spinach and parsley oil. Though the dish is a tad rich and heavy, who can resist good old cauliflower and cheese? The most that can go wrong is a "few" more calories, but who's counting? I guarantee one bowl won't be enough and you won't wanna share this either.

Pomfret is one of my favourite fish and while it's hard to find in the market, it's even harder to find on menus in Thailand. The Seared pomfret (B550++) is line-caught from Koh Lanta. Since the pomfret doesn't have a lot of fat, chef Wakeford "puts fat into it" by cooking it in a beurre noisette (a classic for fish dishes). A stock is made from the bones and head, and that is turned into a beurre blanc emulsion, served with the fish and capers, local dried shrimp and parsley. The capers add their tart saltiness to the dish, almost coating the Thai asparagus with a unique acidic flavour that brings out their juices; almost pickle-like. However, I found that the dried shrimp overpowered the light taste of the fish and wasn't doing much for me. 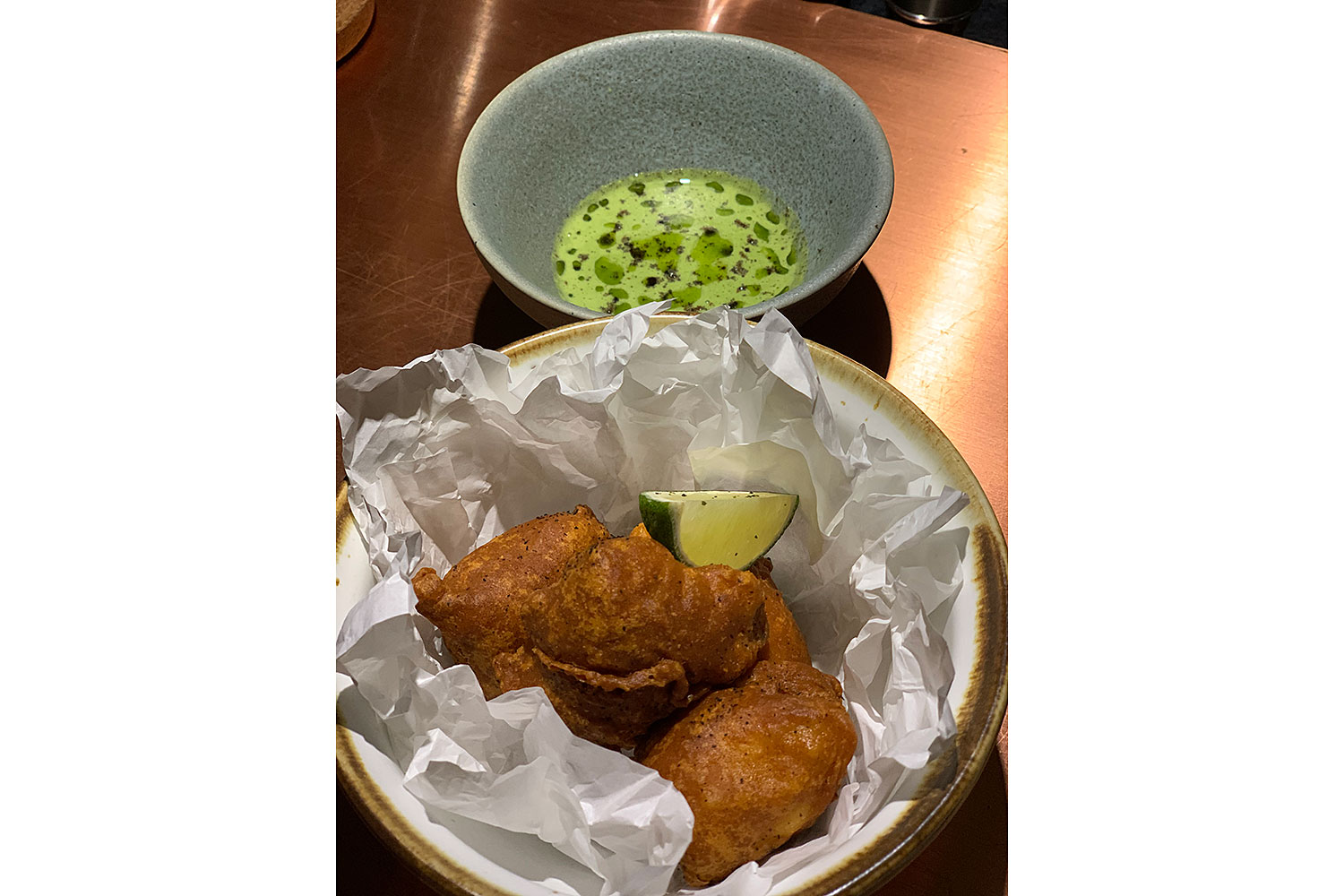 The super classic British stew and mash is reinvented in the Braised wagyu beef (B600++). Braised beef cheek is marinated in red wine and onions overnight. The beef is then seared in the pan and braised with the jus for six to seven hours. The meat comes with potato puree with spring onions (chef Wakeford loves his spring onions, not judging here!) "only because you can't get Savoey cabbage". Fried onion rings and a lashing of Thai blue cheese complete the main. While the meat is imported, the blue cheese is from Sloane's. The star of the show was the mash, which was creamy heaven. Much like the dried shrimp in the fish main, the onion rings did nothing for me. Maybe, I am just a meat-and-potato kinda girl!

Of course, I needed to have a side dish to cut the richness of the beef and the Yuzu greens (B130++) did the trick. Because my mum taught me to eat my greens I ate my Yuzu ponzu and butter-glazed snow peas, and boy, were they delicious! Mums (yum), as they say in Swedish!

I always leave on a sweet note and the Bread and butter pudding (B200++), another classic British dessert is made with brioche. The custard is made with nutmeg, cinnamon, orange, salt and orange zest. "Bake it, slice it and caramelise the top", as chef Wakeford puts it. A bit of gin for freshness is splashed over the top and it is served with orange marmalade puree and milk ice cream.

The Beer poached pear (B200++) is Asian pear poached in raspberry beer and rosé, along with cinnamon and star anise. Served with gingerbread and gingerbread crumble, burnt honey and folds of whipped cream, which gives it an interesting flavour profile. To make the sauce, cooking liqueur is reduced with red wine vinegar to give it that savoury and sweet taste.

Olta means "to drink" in Gaelic.

Chef Wakeford was the executive chef and is the founding partner of Bampot Kitchen & Bar in Phuket.

On the wall, behind the bar, and across from the seated area is B50,000-worth of British designer imported fabric from Clarke & Clarke, that the Wakefords love. They wanted a bar vibe so the "fabric adds texture to the room".

Inside the bread and butter pudding, are sultanas, which are soaked overnight in Sangsom.

"We want to deformalise fine dining and make it approachable," says chef Wakeford of Olta. And that has been achieved. While the technique, knowledge and execution behind the menu may be classified as fine dining, it is packaged differently. It is about doing the best possible things with local produce, at a good price. The impression is swank but the prices are far from it. It is your casual neighbourhood restaurant with comfort food and in no way pretentious despite the tasting menu on offer.