Our little corner of the world
Travel

Our little corner of the world

published : 12 Dec 2019 at 04:01
newspaper section: Life
writer: Karnjana Karnjanatawe
Kayaking is a popular activity that tourists can enjoy while visiting the fishing village.

Located about 2km from the 400-year-old Krue Se Mosque in Pattani's Muang district, Barahom is a low-profile seaside community that opened its doors to tourists on travel packages only last year.

Its name is distinctive.

"It comes from an Arabic word," said our guide Farida Abdulloh, 30, who is also an assistant to the village head. "We believe it is derived from mattahom or al-mattahom, which means those who return to Allah." 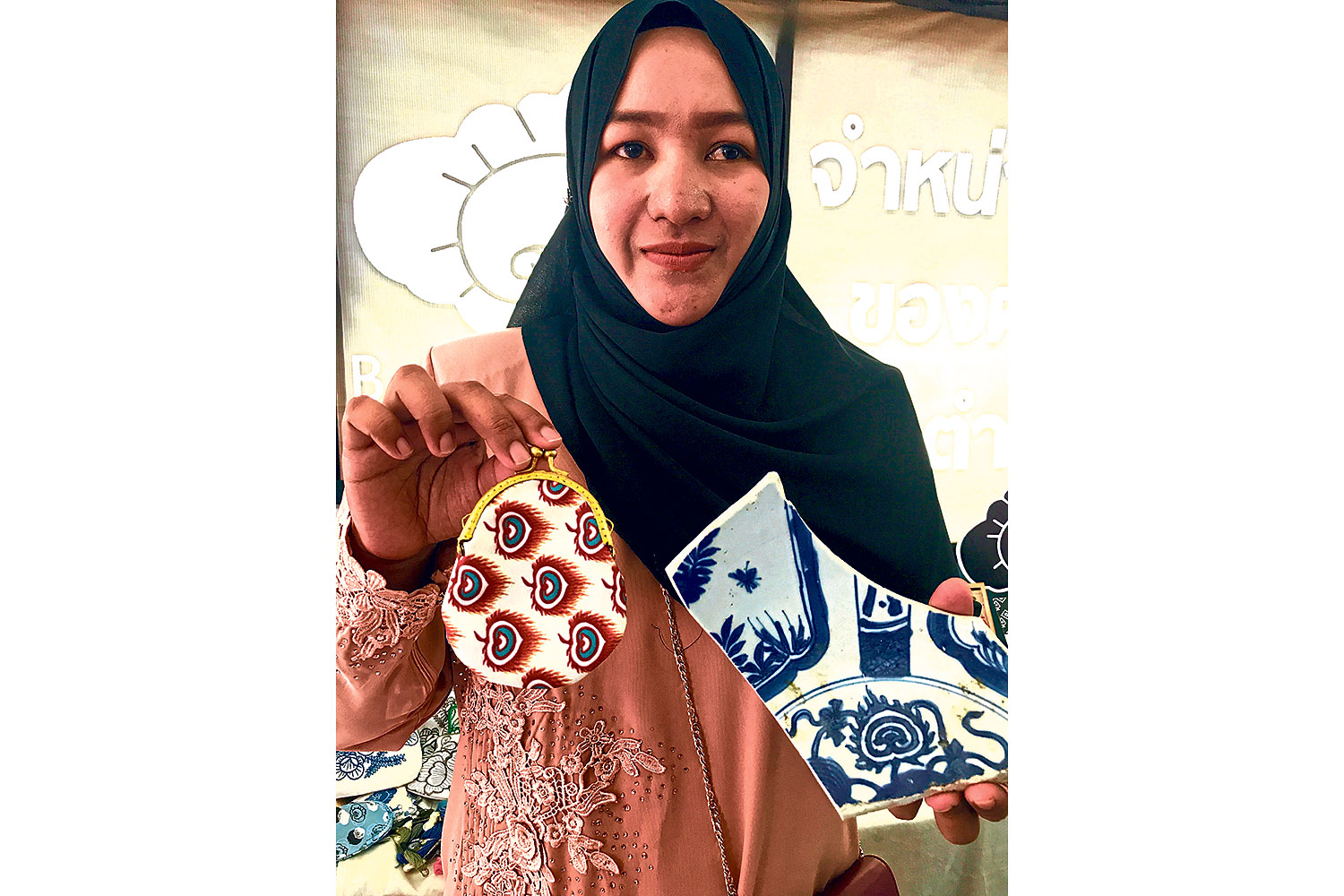 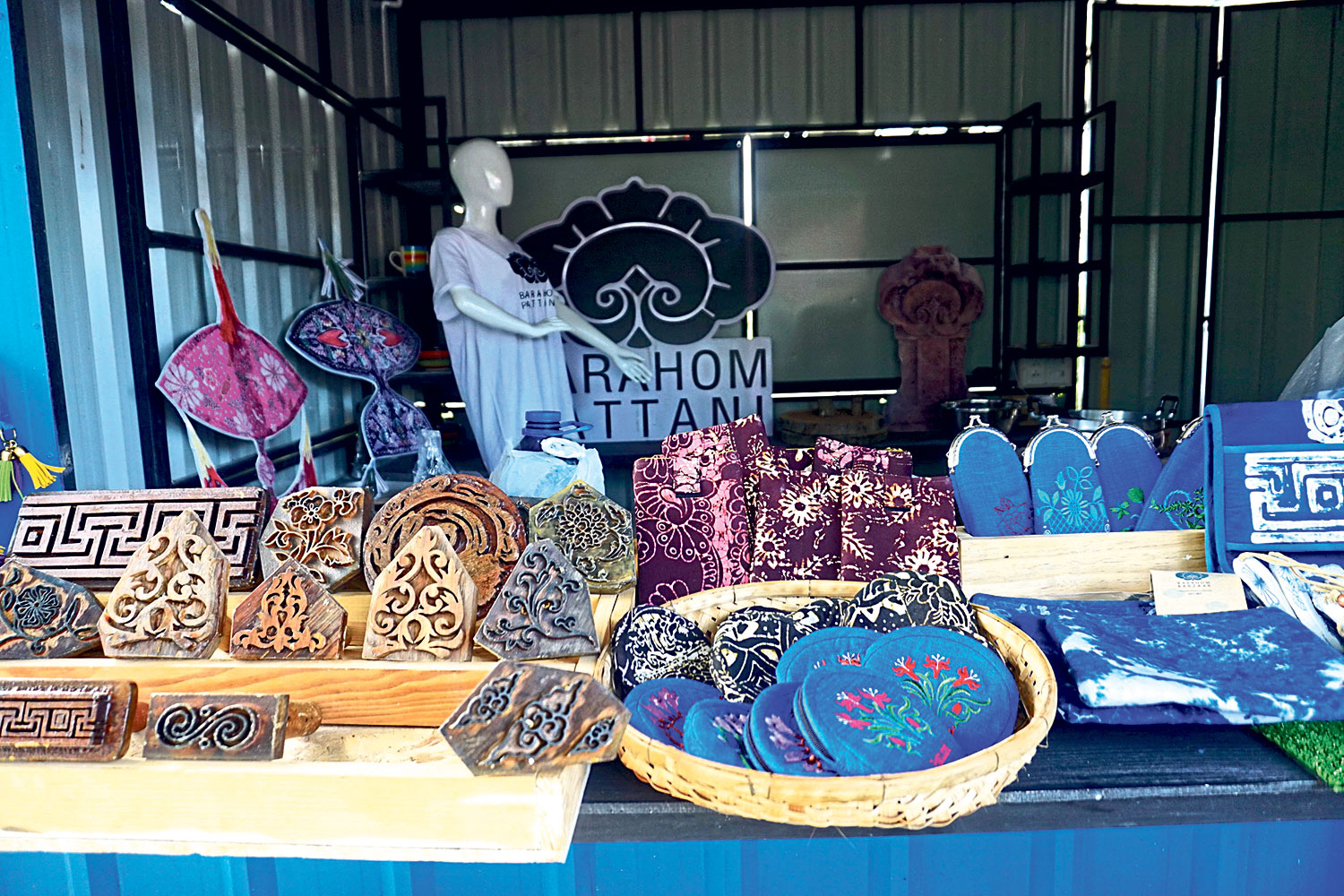 Our guide Farida Abdulloh is also a member of Barahom Bazaar, a group of local women who make handicrafts such as coin purses, handbags and key chains. Her designs are based on things found in her village, such as ancient ceramics. The group’s logo is taken from the tombstone of Raja Intera’s queen, which looks like a fan or a cloud. The group offers tie-dye and batik workshops for tourists to make their own handkerchiefs or scarves. Visitors can create their own patterns or use one of the wooden stamps provided. (Photo courtesy of Thailand Science Research and Innovation (TSRI))

It is a name tinged with sadness, referencing the dead. Farida explained further that was because the village houses two royal cemeteries that belonged to the old rulers of Pattani. One is the cemetery of Raja Intera (Sultan Ismail Syah or Shah) who ruled from 1500 to 1530. He was the first Buddhist ruler who converted to Islam. The other royal kubo (Muslim cemetery), located nearby, was the final resting place of three queens who were the great granddaughters of Raja Intera. They ruled Pattani from 1584-1635.

These kubo are highlights of any visit to the village. At first, they appear plain and simple, a far cry from the eerie beauty of some of the world's more renowned cemeteries, like, say, La Recoleta Cemetery in Buenos Aires, Argentina, with its marble mausoleums and mix of Art Deco, Art Nouveau, baroque and neo-gothic architectural styles.

The cemeteries in Barahom are much like other Muslim cemeteries, except that there is a designated area with a roof to let visitors know that these are royal kubo.

Attaporn Areehathairat, a local teacher regarded as an expert on the history of Pattani, told us about Barahom's glory years during the 16th and 17th centuries. At that time, Pattani was an important trading hub, where ships docked from many parts of the world, including Portugal, the Netherlands, China and Japan.

A long-tail boat for up to six passengers can take visitors to the site believed to be the original grave of the Lim Ko Nieo deity (also known as Lin Guniang) before the site was flooded. During the two-hour ride, visitors can see fishermen working along the shoreline and mangrove tunnel. 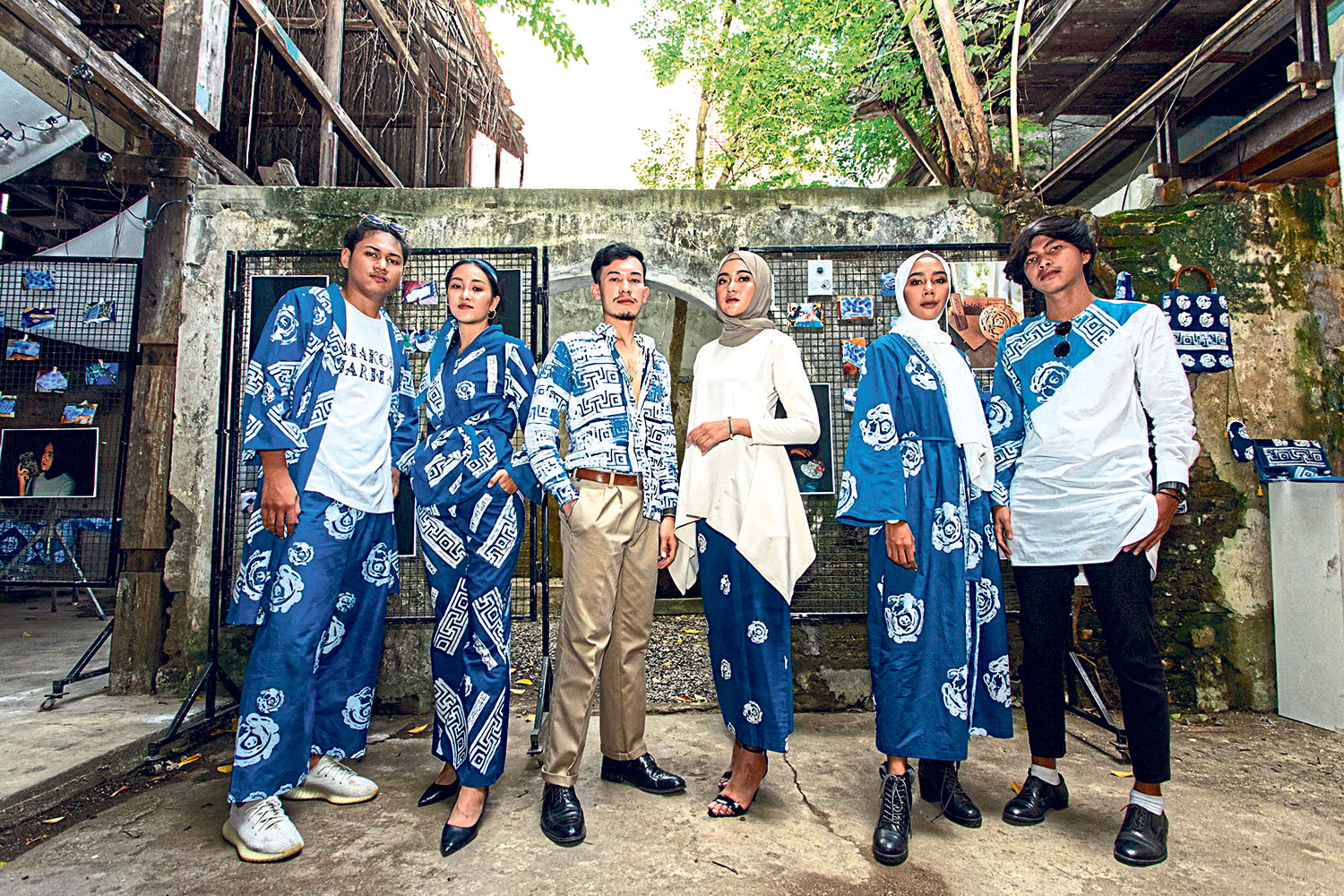 Funded by Thailand Science Research and Innovation, a team from the Faculty of Management Sciences of Prince of Songkla University, Pattani Campus, helped improve the products of Barahom. Its research team has introduced fashion and accessories using the colours blue and white. Barahom Bazaar group plans to add green and violet in the future, thus representing the colours of the three queens. 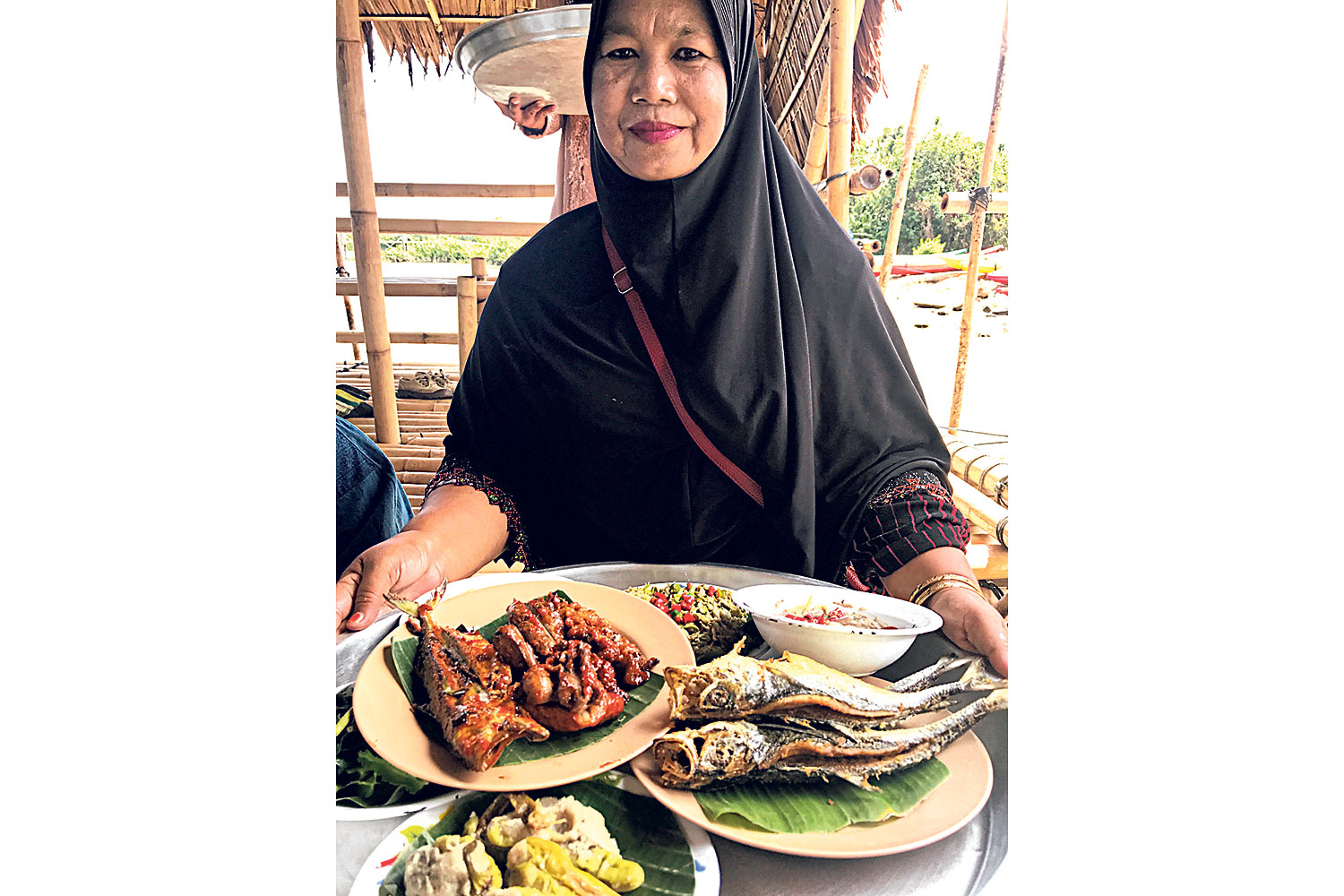 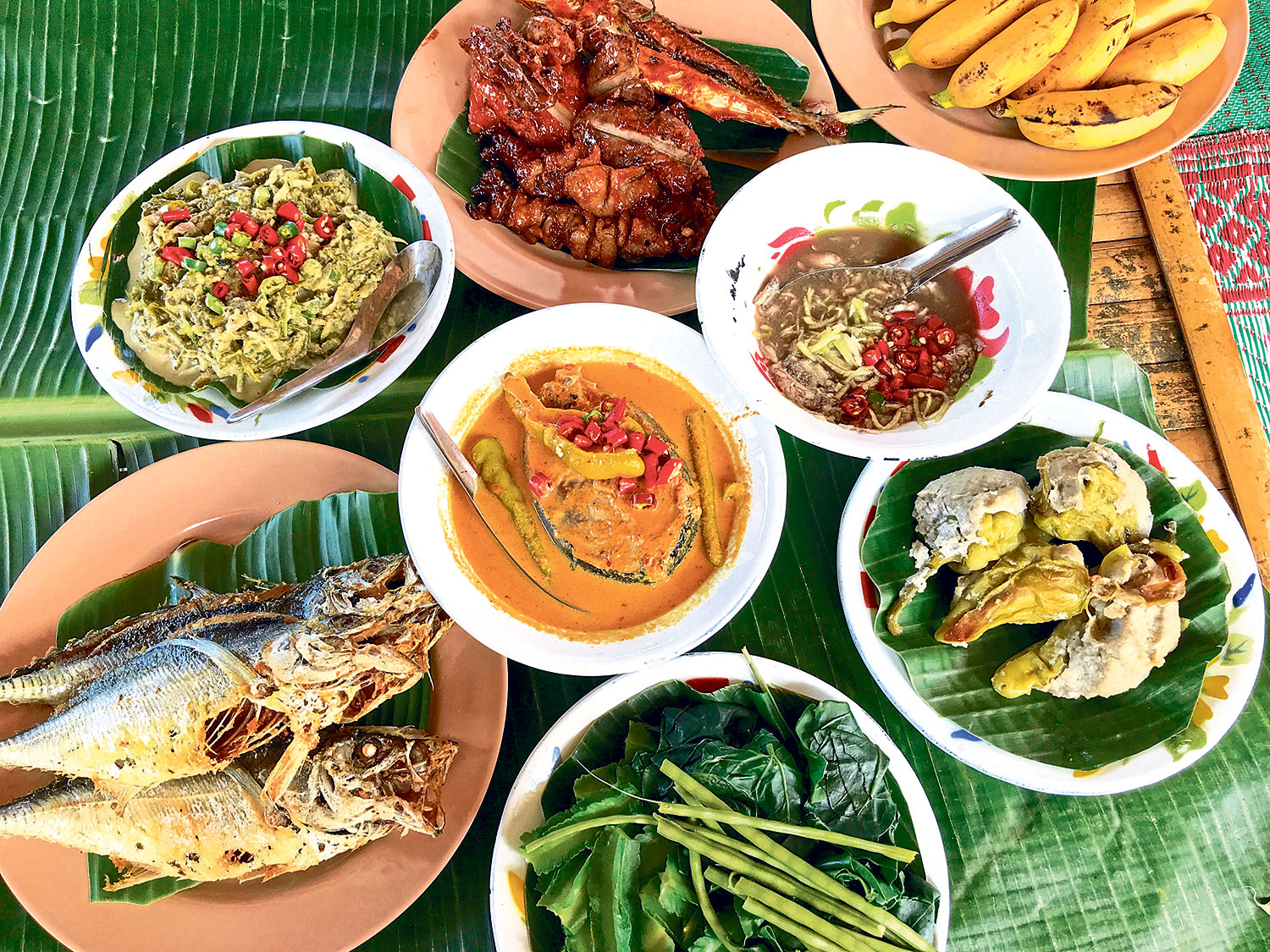 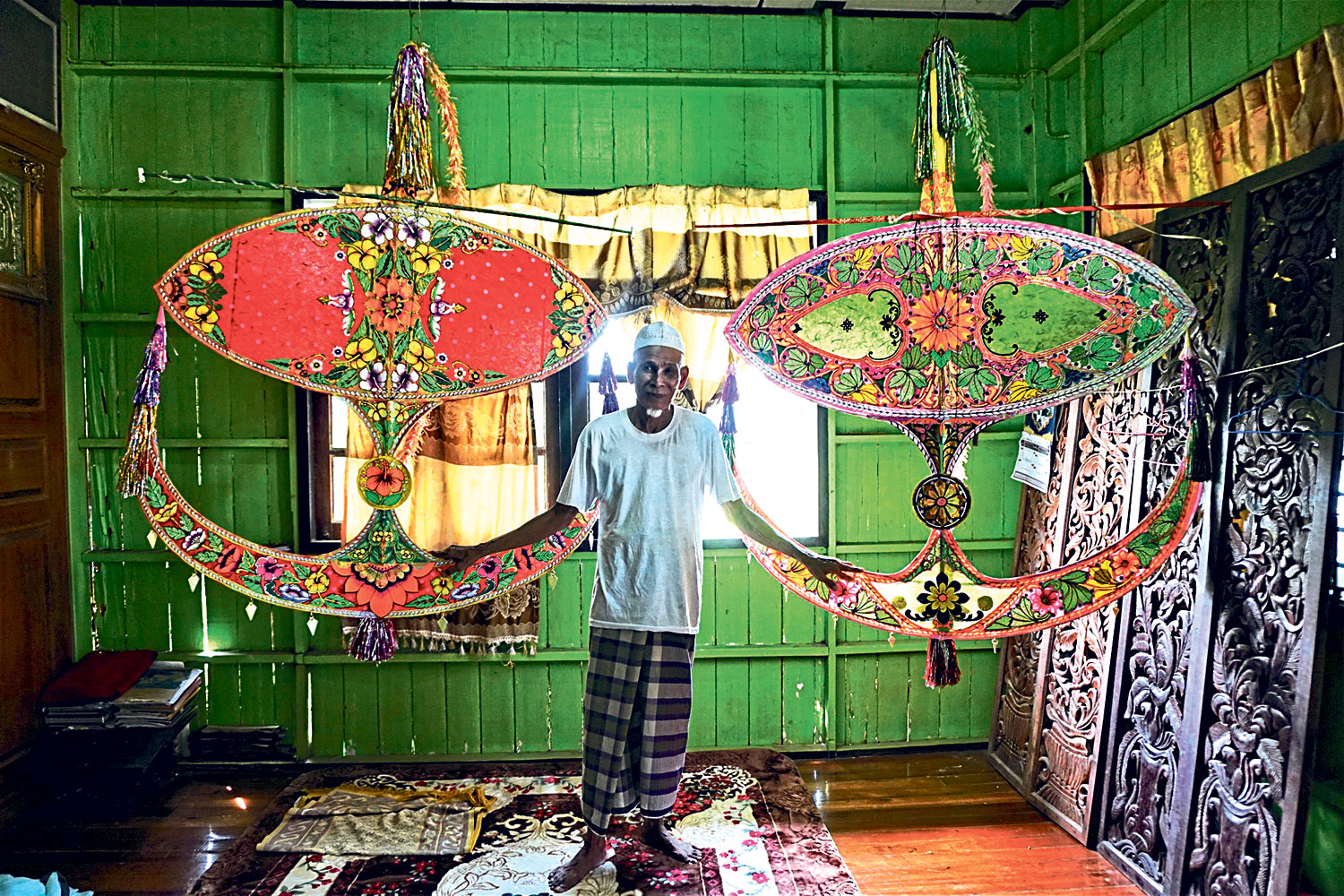 Kite maker Yusub holds colourful wao bulan, a traditional Malaysian kite. Each is about 2m in width. The whole process of making a kite takes about 20-30 days, depending on size. They are also known as moon kites because the lower tips resemble the Islamic symbol of a crescent. 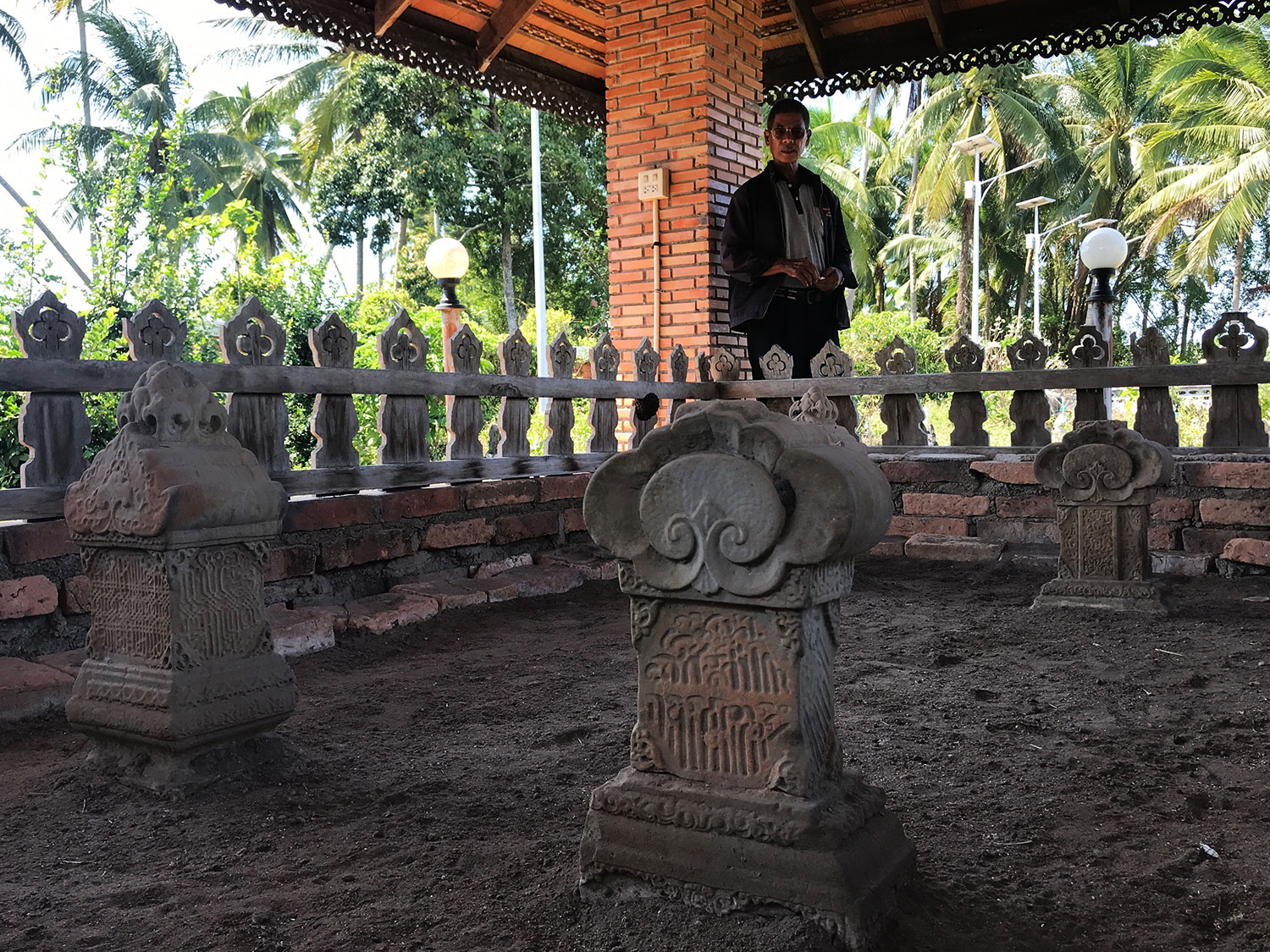 Attaporn Areehathairat led us to the royal graveyard of Raja Intera and his queen. Surrounded by graves of the villagers’ ancestors, the two royal graves are fenced and covered by a tile roof. The tombstones (batu naesae) of the king and his queen are carved sandstone. The one on the right is used as the logo of Barahom Bazaar. 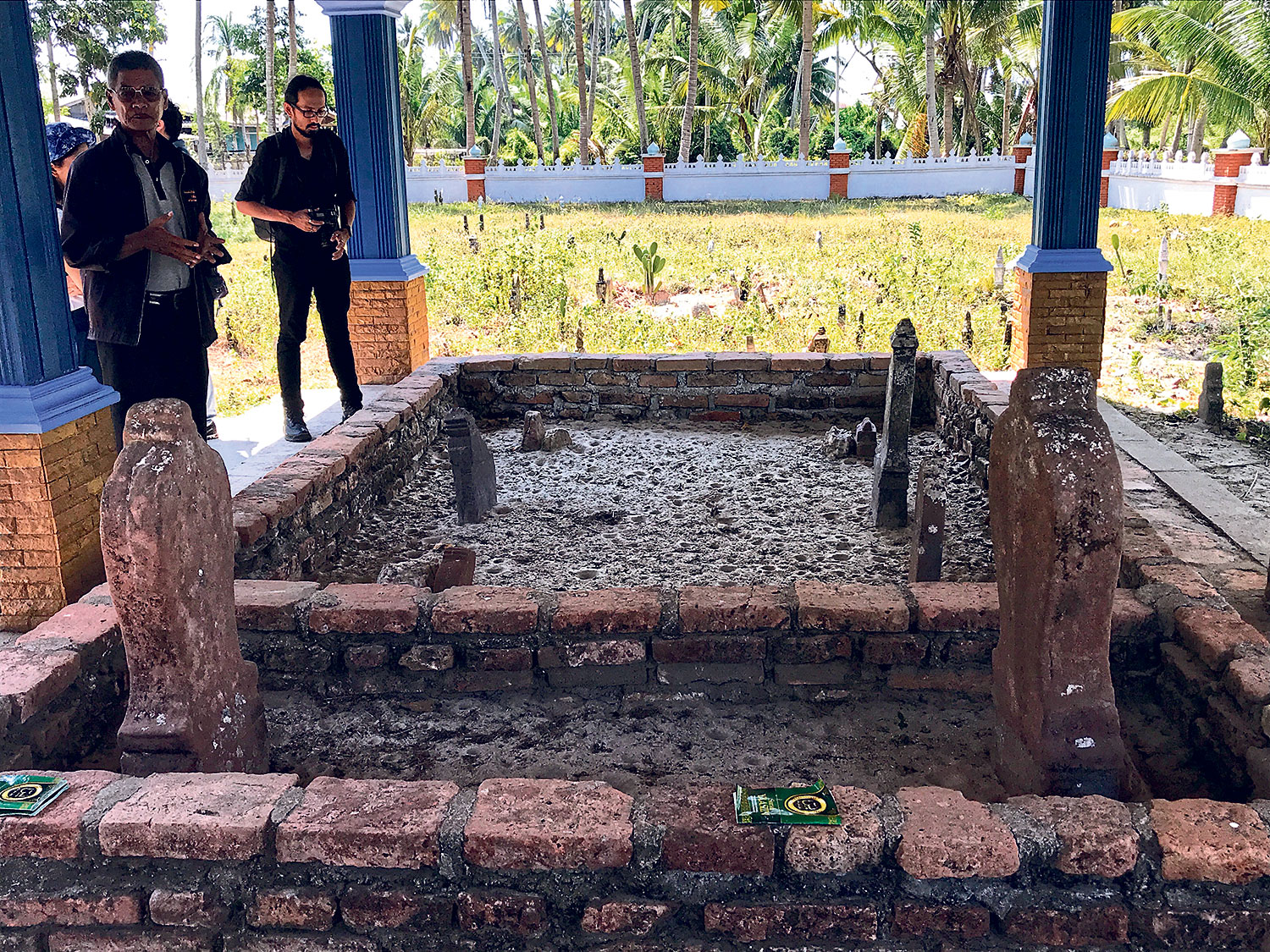 In another graveyard is the final resting place of the three sister queens, also fenced and with a roof. Raja Hijau (also Ratu Hijau), the eldest, ruled for 32 years from 1584-1616. She died and the throne passed to the second sister, Raja Biru (1616-1624), who then passed it on to the third sister, Raja Ungu (1624-1635). The queens were named after colours, so the locals also refer to them as the Green Queen, the Blue Queen and the Violet Queen, respectively. Their period of rule is considered to have been the kingdom’s golden age. 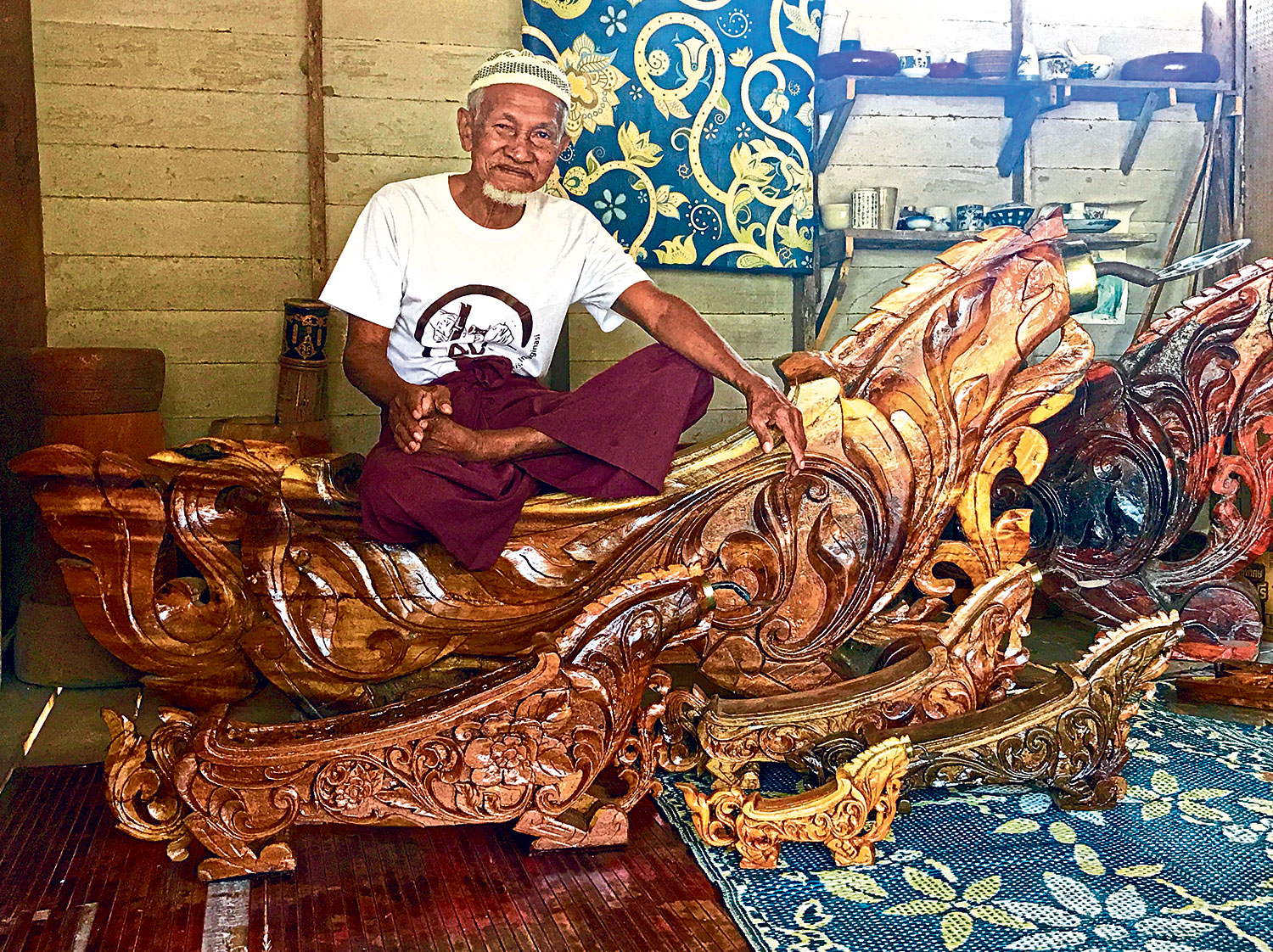 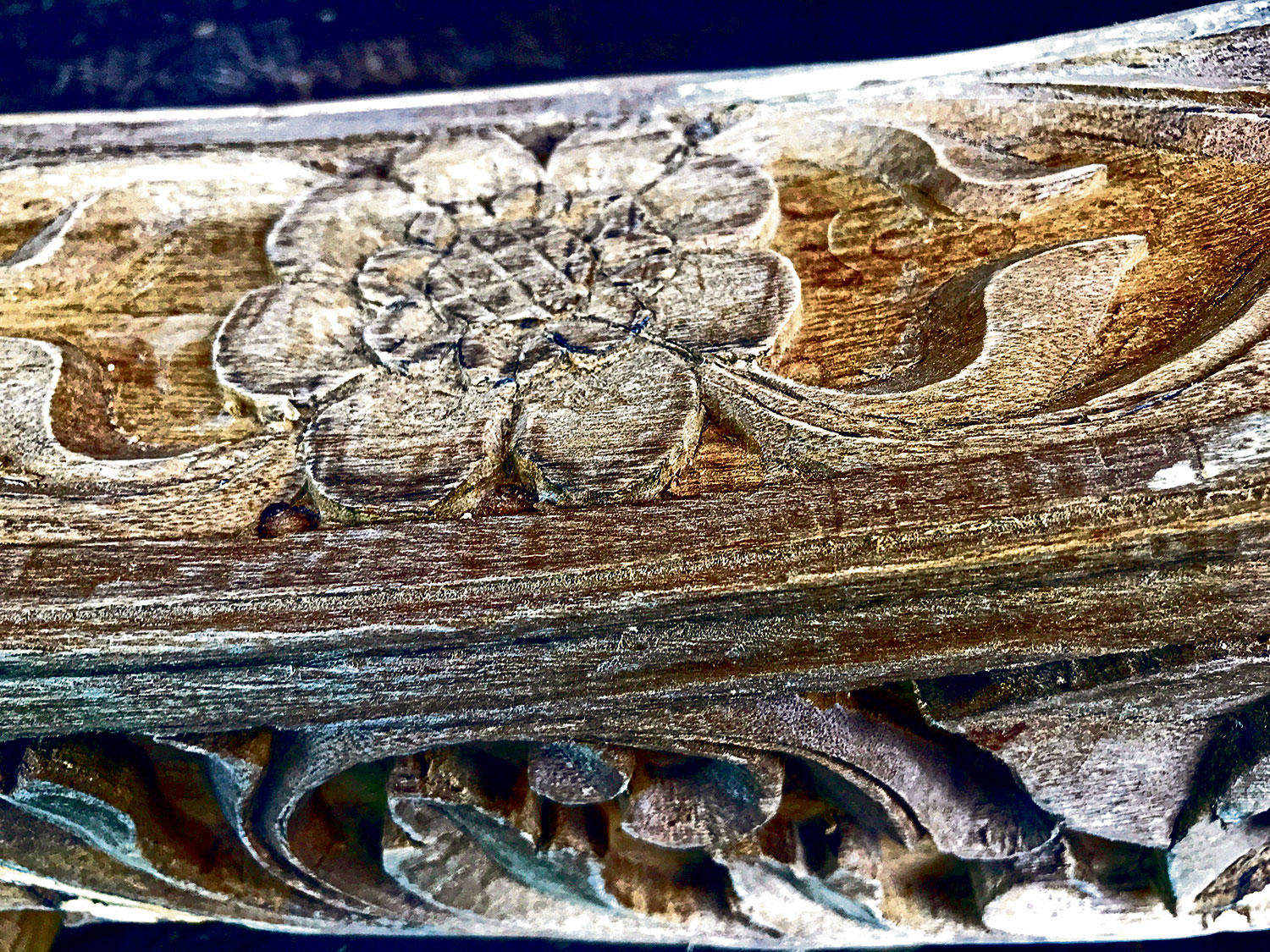 Alee Mahah, 76, has been making kratai kut maprao, a kitchen tool used for scraping coconut flesh from the shell, for more than 25 years. His kratai are crafted from hardwood like the takian tree. He carves floral designs along either side in patterns reminiscent of the kolae boats used by locals. The largest of his kratai is so big a person can lie down on it. (He is pictured here sitting on it.) To purchase it would cost you 35,000 baht. Thankfully, smaller, more affordable kratai kut maprao are available at prices ranging from 800 to 3,500 baht. Alee’s house is a recommended stop for visitors.

"Their ships docked along the shoreline not far from our village because the location could protect them from strong winds," he said.

European traders saw Pattani as a gateway to the Chinese market. Many Chinese traders settled in the area. Popular products from the West included textiles, mirrors and knives while merchandise from the East included silk, porcelain, crafted wood, rice, tin, pepper and sandalwood.

"We still find broken porcelain in the sea not far from our village. Some is on display at the community's information centre," he said.

Today, the village is a small fishing community. They catch an abundance of fresh seafood that they can prepare for visitors. We enjoyed deep-fried fish called pla konga, gaeng lueang pla-o (spicy yellow soup with sliced longtail tuna) and kabu suepe, which is the local name for a dish made from parboiled local herb called pak pe (or sea purslane) mixed with ground fish, shallots and chilli in coconut milk.

The food was cooked by members of the Barahom Community-based Tourism Club. They also prepared herbal drinks and local snacks called kanom papae (banana pancake) to help counterbalance the spiciness of the southern food.

The community offers different tourist packages, from half-day to overnight stays. Highlights include kayaking and a boat ride to the original site of the sacred Lim Ko Nieo deity before it was moved to its present home next to Krue Se Mosque.

Last but not least, for those who may stay until late afternoon, there is the chance to see the sunset over a mangrove tunnel.

"Tourism here is still in its infancy," said Farida, adding that they had more activities awaiting visitors.

"We will try our best to let our visitors know more about us and perhaps they will come back with more friends in the future," she noted.

Barahom can be visited daily. Bookings are required. A half-day tour is 450 baht per person. The package includes a set meal including snacks and herbal drinks, tie-dye or batik workshops and a tour of the village. 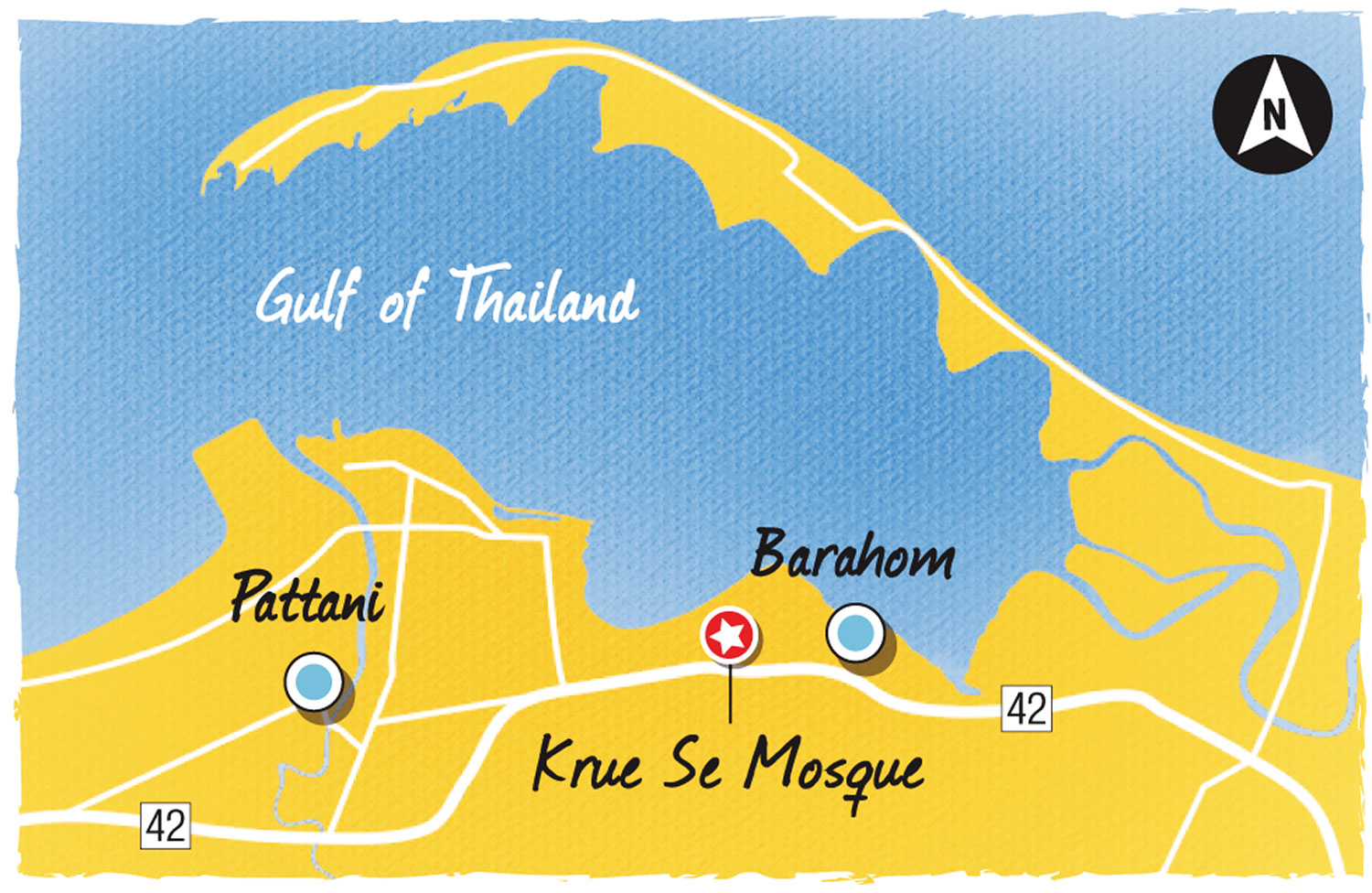