In adopting the principles of the Theatre of the Oppressed, Malongdu Theatre offers a forum to the poor and marginalised

After the stage is set, the play soon begins, depicting the struggle and injustice faced by the oppressed protagonist. At the end of the performance, the same play begins again. However, audiences are no longer isolated. They are encouraged to say "stop" at any point in the show, get onstage and act in place of the actors, turning their role into that of the "spect-actors" to present their own solution to break out of the oppression.

This forum theatre -- in a sense, a public discussion in the form of drama -- is one of the techniques under the Theatre of the Oppressed, which was first practised in Brazil by dramatist Augusto Boal, who was influenced by Paulo Freire's work in critical pedagogy. The idea later spread from South America to Europe and other regions around the world.

In Thailand, Malongdu Theatre considers itself the first troupe in the country to adopt the principles of the Theatre of the Oppressed in both philosophical and practical senses. It is led by freelance actor Sornchai Chatwiriyachai who founded the troupe in 2013. He originally did his master's thesis on using forum theatre to solve community problems. After graduation, he began suggesting the practice to other dramatists, though not many were interested. He eventually decided to form his own theatre group.

"The heart of this philosophy says it belongs to the oppressed. We're not putting on a play for them, or in their place," said Sornchai, 50. "The Theatre of the Oppressed is told by the oppressed themselves, based on the injustice they have experienced. Our job is only to assist them in telling their story."

One of the most recent plays Malongdu (meaning "come try") performed was Now You See Me, Now You Don't, a forum theatre about the struggle of transsexuality and gender inequality. It was performed last year at the Bangkok Theatre Festival and also at the Tai Pride event organised by the local LGBTI community.

The story depicts a transgender man and his struggles, such as an overbearing mother who insists that he wears a dress, discrimination at a workplace, choosing which toilet to use, the curious eyes and unpleasant questions from those around him, and more. 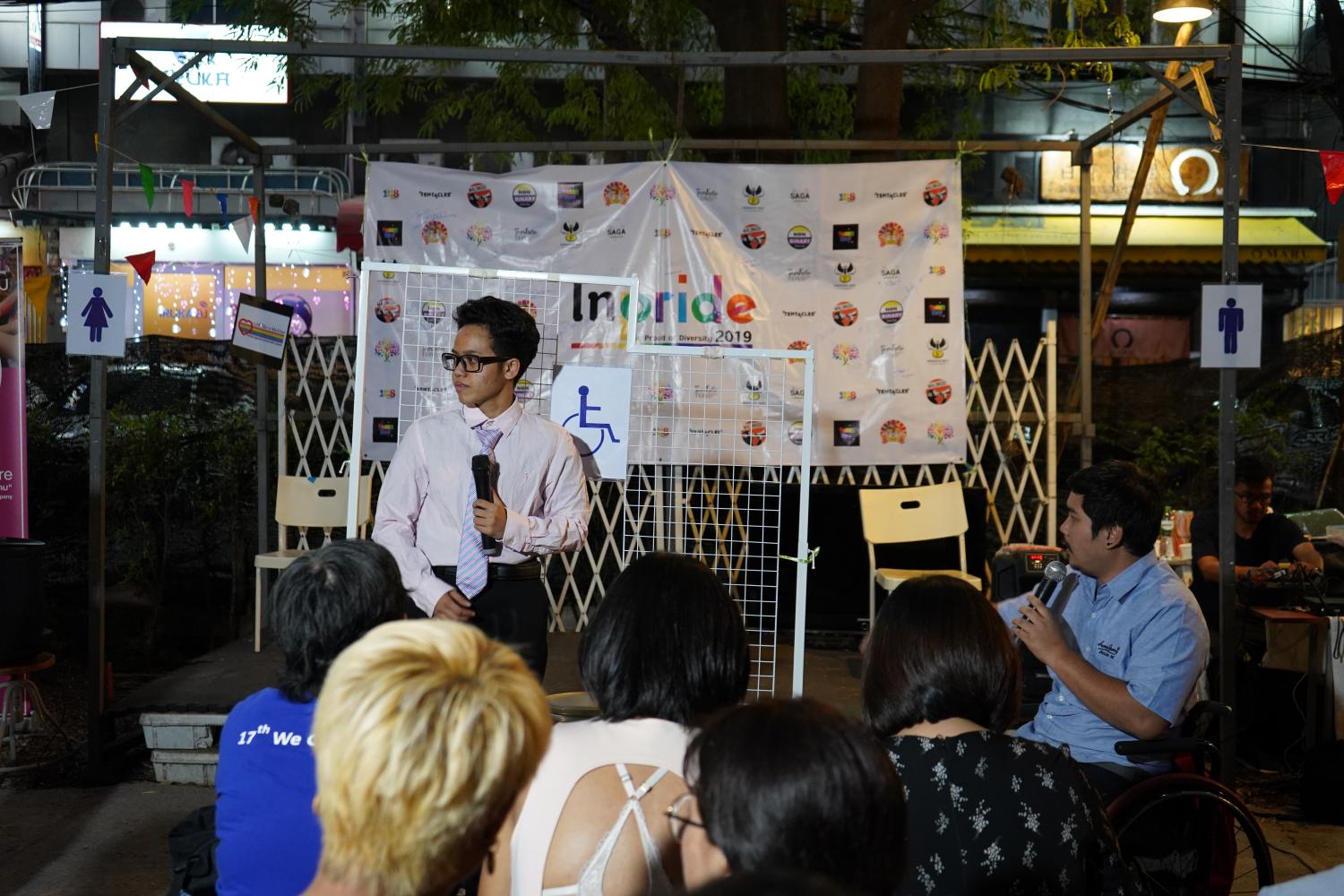 Natchaporn, left, during a performance.

Sornchai insists that the play is written and played by those who own the problem to avoid misrepresentation and stereotypes. Along came Natchaporn Meesaj, 23, a transgender man and an activist, who played the protagonist of Now You See Me, Now You Don't. He drew on his own and other transgender men's experience in his storytelling.

"I think I got to understand myself more through exploring this voice that I don't really get to use. Now, I get to put it in a play, expand on it and share it with people. The rest is up to how people would interpret it," said Natchaporn.

Sharing his experience with forum theatre, he said many spect-actors who aren't familiar with the practice tend to want to act in the role of the oppressor and change their actions. The goal is rather for people to step into the role of the oppressed protagonist. As in real life, changing those in power -- like parents, employers or the authority -- is next to impossible. Actions, instead, can be changed from the oppressed side.

"Standing up and making our voices heard may not always end well. But if we do nothing, we continue to stay oppressed, giving more power to those who hold it above us. At least we get to move forward by speaking up, and in this process we may be able to find more solutions to what we are facing," he said.

"No need to agree. Even better to disagree," explained Sornchai of the theatre's motive, which is to stimulate a collective debate. One thing audiences will not get from Theatre of the Oppressed is a conclusion being spoon-fed to them. 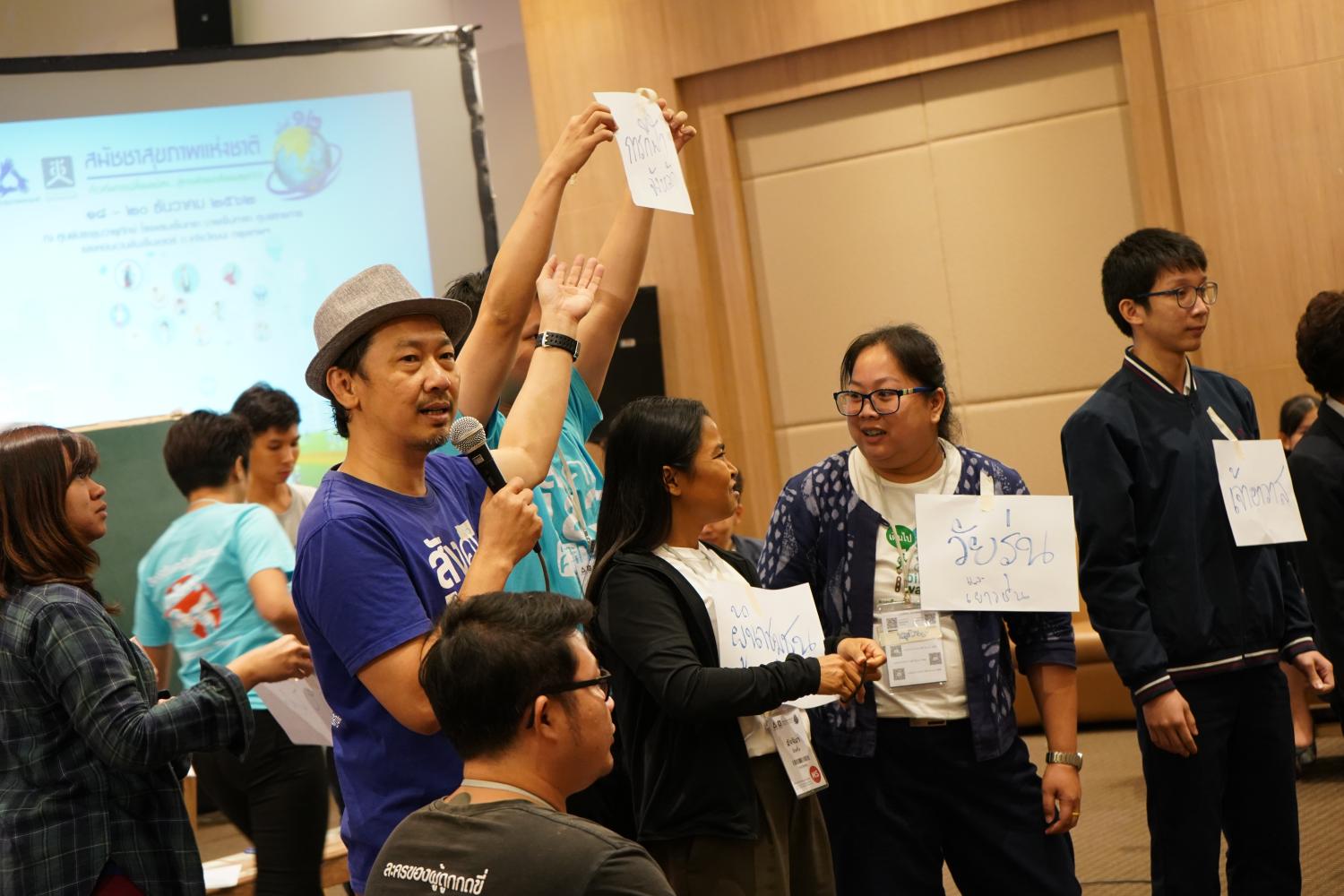 Sornchai, in blue, during a recent role-playing workshop.

"The education of the oppressed doesn't believe that one person can give answers to others. They have to seek their own, with one another. It brings people together to seek a way to lessen oppression," he said.

The best place to direct forum theatre is to the community that is experiencing this very problem, so people can brainstorm how to handle oppression. Ideally, Sornchai said it's something the oppressed and the oppressor should watch and partake together to illicit reactions.

In addition to gender inequality, Malongdu has examined issues ranging from the micro to the macro, including homelessness, people with disabilities, sexual harassment, caring for the terminally ill, bullying, the Hong Kong protests, cab drivers rejecting passengers, and more. The troupe has approached different communities, and was likewise invited by several groups for collaboration.

"These issues are something society has to know about. But if it's so easy to say, then people would've said it already. Or they are also tired to always repeat the message. And when repeating doesn't work, people feel a play should be able to help. That's when they approached us," said Sornchai.

One of the topics he's interested in is political polarisation, which he feels people only argue about on social media and not in real life.

He also aims to address city-based injustices, mostly stemming from public transportation like the skytrain and subway. Indefinite price hikes, lack of crucial facilities like toilets and elevators, and the clutter of advertisements led him to ask how the rest of society still puts up with it. These topics will be found in Malongdu's future productions.

"I feel I'm an enemy of the people's ignorance. Are there issues people are not discussing? I'll address them," said Sornchai. He was wearing a T-shirt with Malongdu's motto: "Society is bad because people ignore." 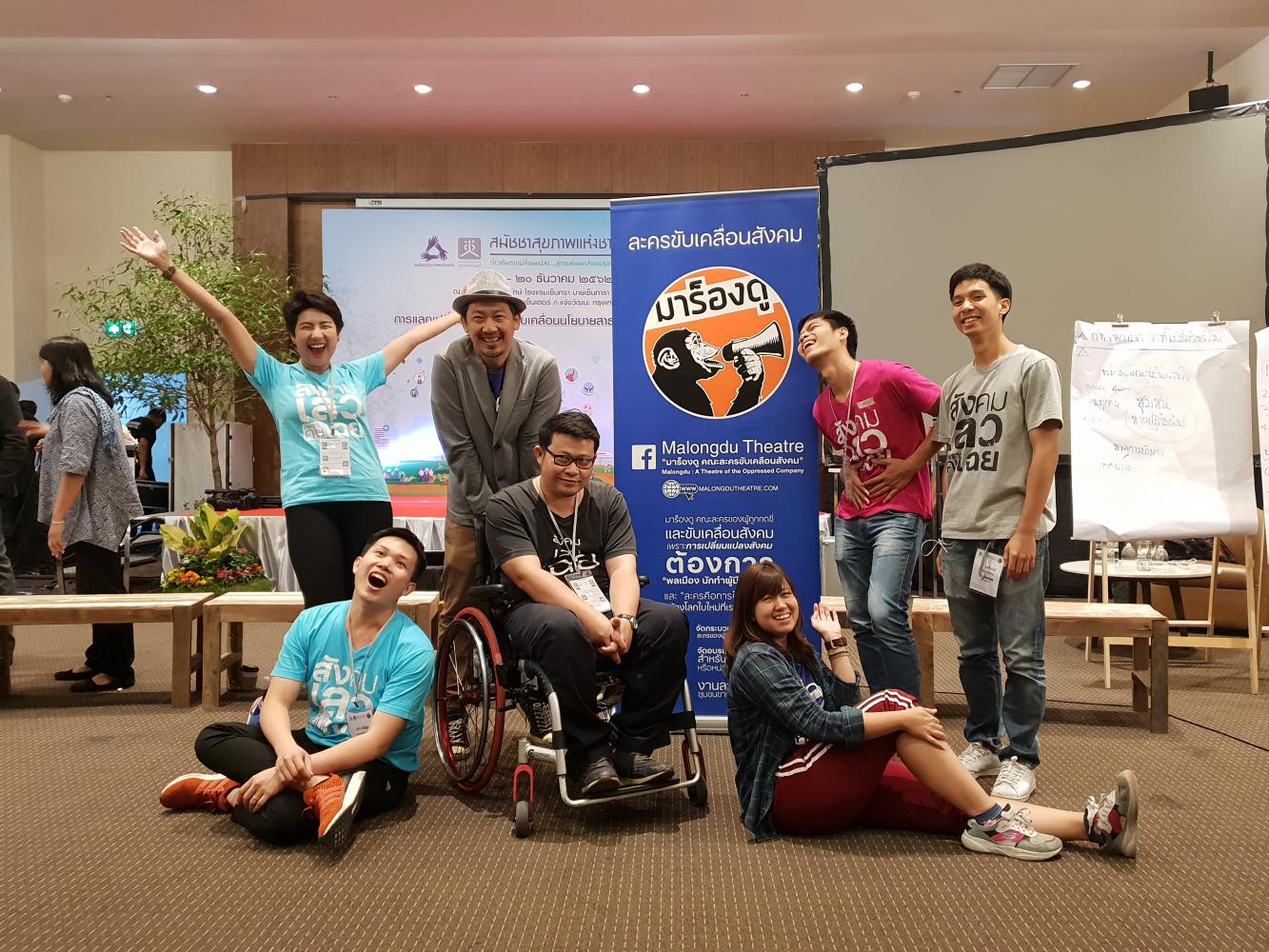 Sornchai's intention to challenge society is clear, so is his desire to empower the voiceless and generate social discussions one play at a time.

While the forum theatre and other practices under the Theatre of the Oppressed have found some success in influencing social movement and solving community's problems in some countries, the impact has yet to be pronounced in its beginning stage in Thailand.

"To me, theatre is like a rehearsal for the actual social movement. Boal said it, too. We always talk of changing our society, but never about when we are going to practise for it. Theatre allows us to rehearse the change we want to see in the world. That is its power. We turn serious, real-life things into a play, and turn a play into something real," he said.

A play doesn't only affect its actors and spect-actors, but also general audiences.

"The reality of society can be changed depending on whether you change. Sitting there, watching people sitting next to you go up and do things, it sparks something in you towards action. It discreetly empowers people," said Sornchai.

Jandaraabsorn Rattaprasit was among Malongdu's audiences in one of its previous plays about caring for bedridden patients. She described how she was stunned by the play which she felt was like a reflection of her life.

"This theatre has a way to make people realise things on their own without actually telling them. There is a certain energy to it that I really liked. It brings out the humanity -- the instinct of the oppressed," said Jandaraabsorn, 36, a psychotherapist.

Since watching that first play, she began volunteering with Malongdu and taking part in different projects. Malongdu Theatre is entirely run by volunteers, with around six core members today. Sornchai estimates that the number of people involved in their projects over the years at about 100, with many more witnessing the performances.