Since the mid-19th century, according to Wasana Wongsurawat, the Thai elite has remained in power through a simple two-part formula. First, cultivate the support of the leading Thai-Chinese businessmen to secure the economic base. Second, align with the dominant world power of the moment.

With this formula, the elite has negotiated a century and a half of revolt, revolution, ideological conflict, two global wars and three shifts in global hegemony. In Wasana's repeated description, the alliance of the crown and the Thai-Chinese capitalists has been simply "formidable". This formula explains why monarchy has not only survived but remained so powerful, and why the Chinese in Thailand are in a uniquely comfortable position compared to other communities of the diaspora.

Wasana teaches at Chulalongkorn University. She completed a doctorate on Chinese history at Oxford before turning to look at the story of the Thai nation through the lens of the Thai-Chinese. She researched the book in the Chinese archives in Taipei as well as the more conventional sources in Thailand and the West. She argues that earlier studies have missed the crucial international context of the national story.

Until the mid-nineteenth century, Siam existed comfortably within the tribute system of imperial China, and the Chakri monarchy oversaw a network of economic monopolies that favoured themselves and a small coterie of Chinese traders and tax-farmers. The first shift in global hegemony came with the rise of the British Empire, prompting the first transition.

The British imposition of free trade and extraterritoriality initially broke up the monopolies, undermining the interests of both crown and capitalists, but not for long. Extraterritoriality, which allowed Chinese businessmen to avoid Siamese law, created exactly the lawless conditions which primitive capitalism loves. Free trade gave enough economic benefit for Britain to evolve from threatening colonialist to international patron. The alliance of crown and capitalists thrived in the colonial era.

There were just two problems. By the early 20th century, the resident Chinese community was sizeable, perhaps a third of the capital's population. Siam wanted them to be citizens and taxpayers, but Chinese nationalists wanted them to remain Chinese by blood and affection, and wanted their funding for the modernisation of China. The Siamese government disliked Chinese schools that aimed to preserve the culture and loyalty of the Thai-Chinese, and disliked the significant stream of remittance back to the homeland. In practice, however, it could do little about either.

The second problem arose from the complexity of the Chinese community. At one end were the richest businessmen in the country. At the other was a mass of poor migrant labourers, vulnerable to revolutionary ideas and secret societies. In Wasana's vocabulary, these two segments were the "good" and the "bad" Chinese.

The good had to be cultivated and the bad suppressed. King Rama VI ranted against the Chinese as "Jews of the East" for being disloyal with their affections and their cash. Wasana insists that these remarks were a reminder to the "good" Chinese to remain good. The king also wrote warmly about the Chinese, particularly those who supported his expensive projects, and acted as his moles within the Chinese community. The alliance was solid.

The second transition came when the British Empire faded and collapsed in the Second World War. At this juncture, the rise of Japan as a new Asian power had special appeal for a new breed of Asian nationalist. This period saw the only serious challenge to the "formidable alliance" of crown and capitalists. 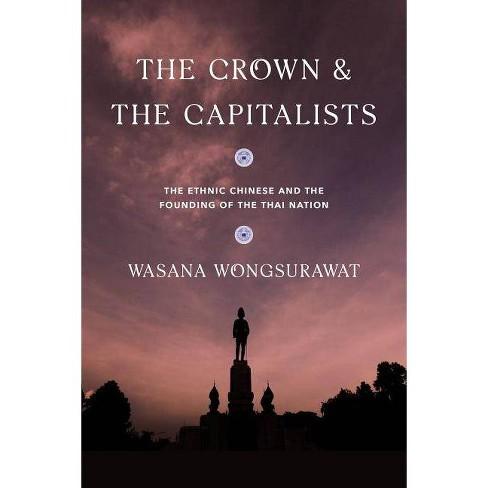 The Crown And The Capitalists: The Ethnic Chinese And The Founding Of The Thai Nation Wasana Wongsurawat 2019, Seattle, University of Washington 216pp Distributed through Silkworm Books 750 baht The Crown and the Capitalists

In 1932, a nationalist group overthrew Siam's absolutist monarchy, abrogated extraterritoriality, and began establishing a state in which nation and territory were congruent. They turned on the Chinese, partly to force them into Thai nationality, partly to aid their Japanese mentors who were at war with China, but mainly as a strategy to deflate the monarchy by undermining its strategic partnership with the Chinese capitalists. They shut down Chinese schools and newspapers, reserved occupations for Thai nationals, nationalised businesses, and deported Chinese from strategic areas.

But not for long. The defeat of Japan brought this challenge to an end. From 1943, royalists began manoeuvring to reinstate the old alliance. In 1946, the US emerged as the new world hegemon, and the Thai royalists quickly aligned by supporting the US's Cold War agenda in Asia. The Chinese capitalists easily fell into line as they prospered on US-inspired development policies.

The US insisted that the military be admitted to the alliance, resulting in "royalist military dictatorship". The remnants of those who had espoused the post-1932 challenge were jailed, murdered or driven into exile. The "bad" Chinese were again demonised as communists. Formidable yet again.

With the US defeat in Indochina in 1975, another transition was set in motion, and has become clearer with China's spectacular rise. For the Thai-Chinese capitalists, this transition has been easy. They flocked back to the homeland as soon as restrictions were lifted. The crown was not far behind.

As Wasana astutely points out, Deng Xiaoping's first stop on his first overseas tour as China's leader in 1978 was in Bangkok, and his first meeting was with His Majesty King Bhumibol. Princess Maha Chakri Sirindhorn visited China two years later, and made her 29th trip to accept her nomination among the "Best Friends Of The Chinese People" in 2009.

Wasana suggests that historians of modern Thailand have spent too much time looking at democracy, constitutions and liberal ideas, and hence have missed the importance of this three-way alliance of crown, capitalists and world power. In her index, there are only three entries for constitution, six for democracy and none for liberalism.

This book has some superb passages of original and unusual research, particularly from the Chinese records and newspapers, but also on the remittances back to China, the Yaowarat Incident of 1945, and the Plapphlachai Riot of 1974. Yet, the main appeal is its sweeping, polemical treatment of a century of history. Back in the late 1980s, a handful of young Thai-Chinese intellectuals protested that the Thai-Chinese deserved more recognition in the history of the Thai nation. Here, 30 years later, they fill the frame.