Gorilla in the mist

Despite years of campaigning by activists to have Bua Noi moved to a new home, Pata Zoo remains reluctant to let her go

For several years now, there has been a campaign calling for a better life for Bua Noi, Thailand's last gorilla. What that better life would look like, however, remains unclear.

Bua Noi has called Pata Zoo in Pata Pinklao Department Store home for more than three decades now. It is fair to say that both the department store and the zoo have seen better days. As a result, there are concerns over the conditions for Bua Noi, as well as her fellow animals.

The Free Gorilla campaign has therefore been advocating that Bua Noi be released into the wild. However, Pata Zoo has always insisted that she could not survive this. There was an apparent breakthrough, however, when the zoo pledged to relocate Bua Noi from her rooftop enclosure to the ground within five years.

The Free Gorilla campaign has been led by animal rights activist Sinjira Apaitan, who in 2013, gathered 35,000 signatures in support of her petition to find a new home for Bua Noi. This year, Sinjira has joined forces with Polish activist Joanna Sobkowicz to launch the website freegorilla.org to raise awareness of Bua Noi's story and give updates about the campaign.

"Pata Zoo feeds [Bua Noi] very well and provides doctors to monitor her closely," Sinjira said. "Her physical health might be OK but how about mental health? She is a wild animal. We can't hear her thoughts but we can see the sadness in her face. She has woken up in the same cage every day [for 32 years] and never seen the outside world. We believe that Bua Noi can live in a cage, but we'd like to educate the younger generation on proper wildlife conservation.

"We're concerned about Bua Noi's safety in case of a fire. Recently, a 48-year-old gorilla died in Germany after a fire broke out in the zoo after someone released a paper lantern into the sky. We doubt that Bua Noi would survive a similar situation. Imagine if Bua Noi dies, should children be placing flowers in front of a concrete cage or in a green courtyard? Doesn't she deserve more dignity?" 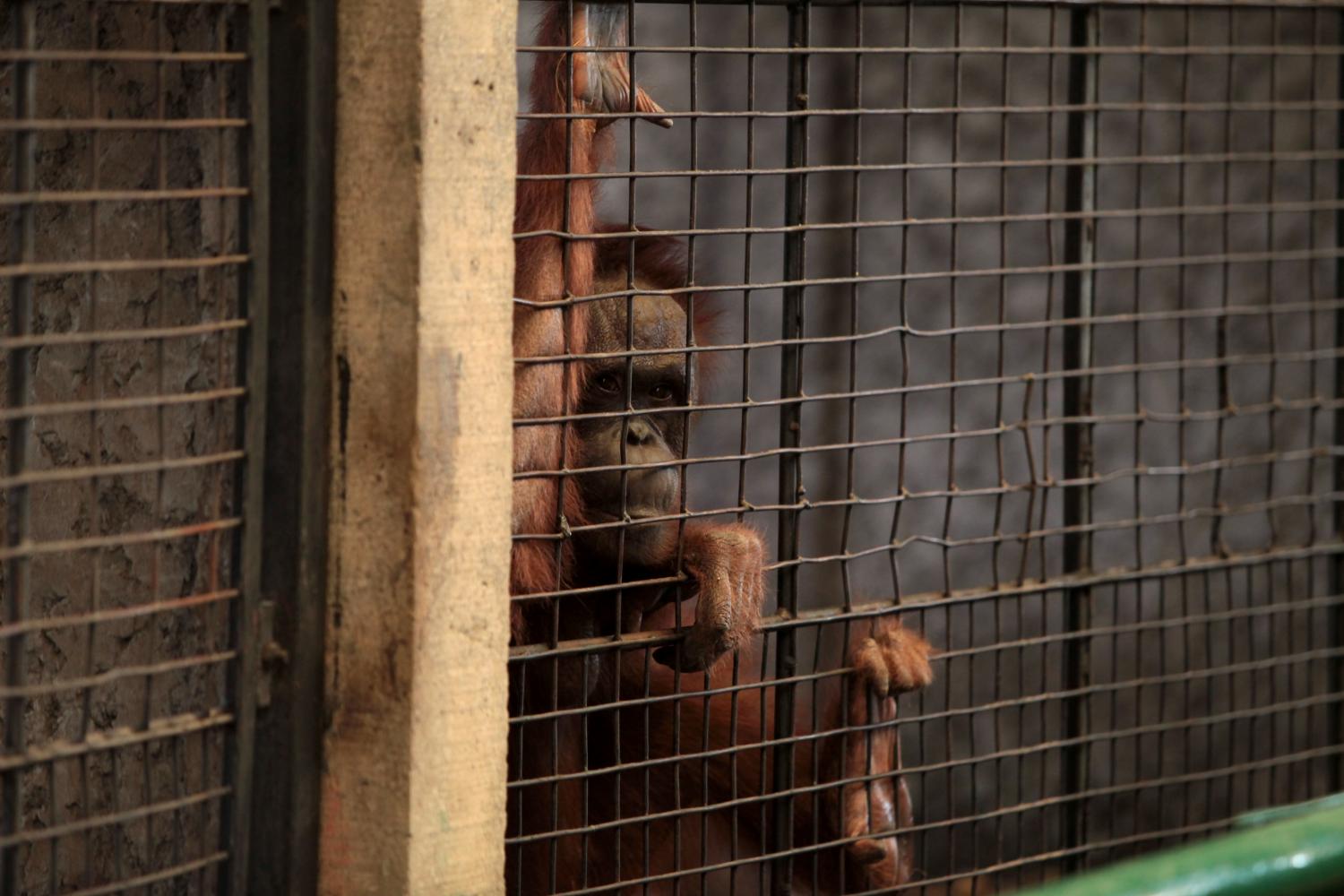 Bua Noi was brought to Thailand from Germany as a one-year-old in 1988, and has been kept in her enclosure in the rooftop zoo in Pata Pinklao Department Store ever since. Her mate passed away over a decade ago, so her only companions now are the veterinarians and other animals, including orang-utans, birds, langurs, flamingos and sheep.

"When I saw the article about Bua Noi, I couldn't believe that this happened in Bangkok," Sobkowicz said. "Pata isn't a zoo. It's a kind of exhibition and that kind of place shouldn't be legal. It's really the law that can protect animals from being abused and [prevent] tourists from contributing to animal cruelty without knowing.

"I can see the benefits of zoos. Animals should be implanted with microchips so that we can trace them no matter where they are or control their temperature in case they're sick. But Pata Zoo doesn't really think about [the animals]. The owner says how much he spends to feed [Bua Noi], but feeding our animals is a duty. It's like when we buy a cat or dog. We share 98% of DNA with gorillas, so Bua Noi is very smart and she's thinking. She has never found the Sun because she has lived internally her whole life."

Despite the zoo's pledge, moving Bua Noi to the ground floor and building a new enclosure is far from guaranteed. The cost is estimated to be as much as 50 million baht. In order to fund the project, Pata Zoo needs a partner -- difficult to find in the current economic climate. There is an alternative possibility, however; the Aspinall Foundation in the UK has said it is willing to cover all expenses to send Bua Noi to a gorilla sanctuary in Africa. But this is not something that appeals to the zoo's authorities. 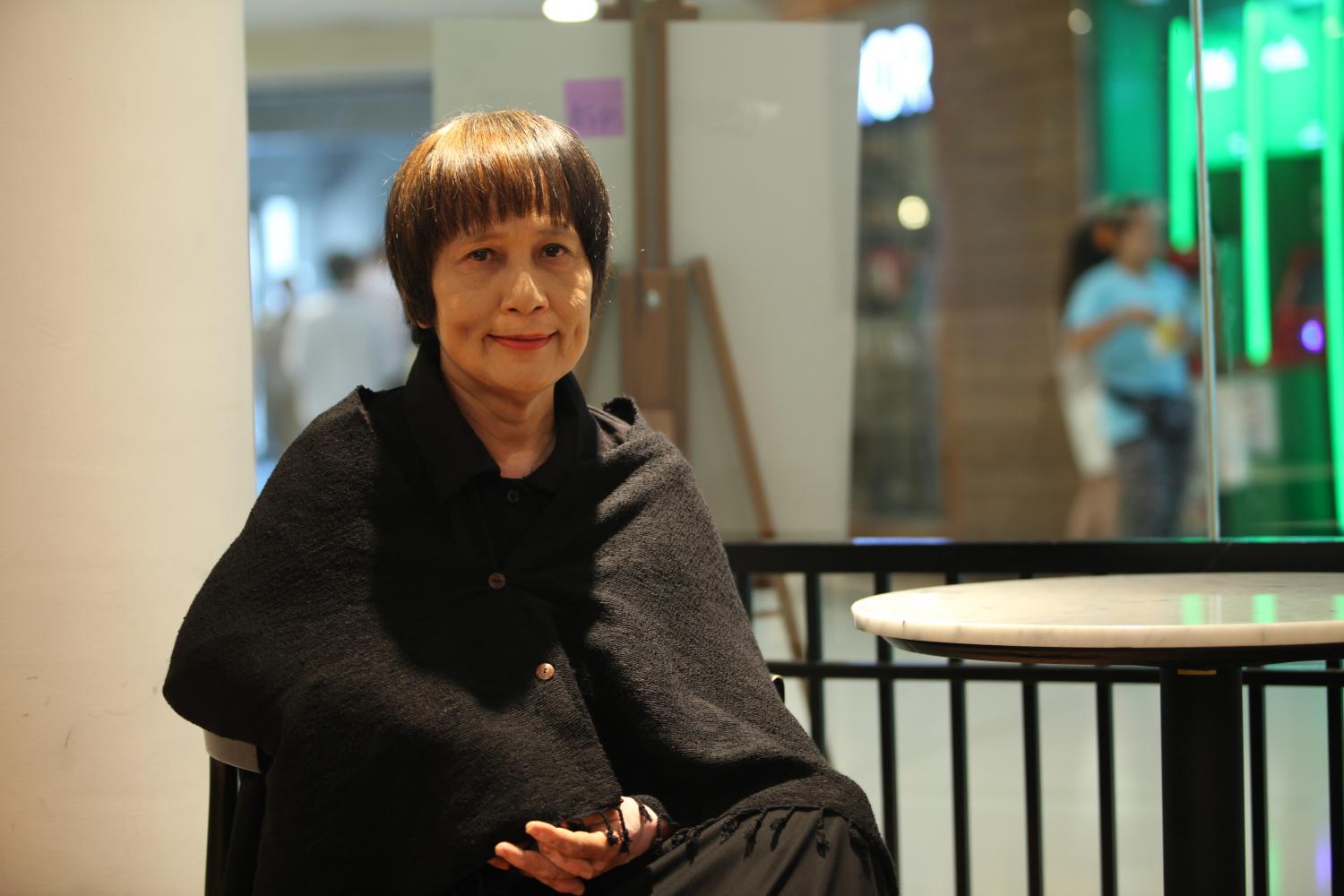 Pata Zoo is the brainchild of Vinai Sermsirimongkol, whose stated aim was to educate Thai children about gorillas and wildlife conservation. The zoo is currently run by Vinai's younger brother Kanit.

Occupying 200m², Bua Noi's air-conditioned cage is surrounded with glass walls to protect her from bacterial infections, diseases and noise. There's no greenery inside, but it's designed to resemble a cave and is equipped with a television and a giant swing for leisure.

"It's a difficult task to relocate an ape," Kanit said. "Just going to Chiang Mai Zoo, we have to give Bua Noi a dose of general anaesthetic, which many leading zoos avoid doing. She risks death while adapting to unfamiliar surroundings.

"An expert suggested how to construct a safe cage for her. The floor is made with concrete to protect her from bacteria that can be found in Southeast Asia. For reference, Singapore Zoo had four gorillas which died of melioidosis in 1983. Two more gorillas were brought to Singapore in 1992. One succumbed to melioidosis and the remaining ape was sent to Europe."

Living in her enclosure on the 7th floor of the shopping mall, Bua Noi kills time by wallowing on the floor, watching TV or walking around to greet visitors. Every day, she is fed two large meals -- each of about 3kg -- of bananas, oranges, guava, boiled corn, red grapes, apples and UHT milk.

The zookeepers clean her cave 30 minutes before each feeding time. This also works like an alarm clock, letting Bua Noi know that food is on the way. She sits and watches the door in anticipation.

"Want to send her back to nature? We should think about the animals' quality of life in the jungle," Kanit argued. "They are under threat from diseases like Aids and Ebola, as well as civil wars and poachers. We can learn something from the bushfires in Australia that have killed around 500 million animals. We once conducted a fire evacuation drill to demonstrate to the public how we can move all animals to the ground floor within 15 minutes. 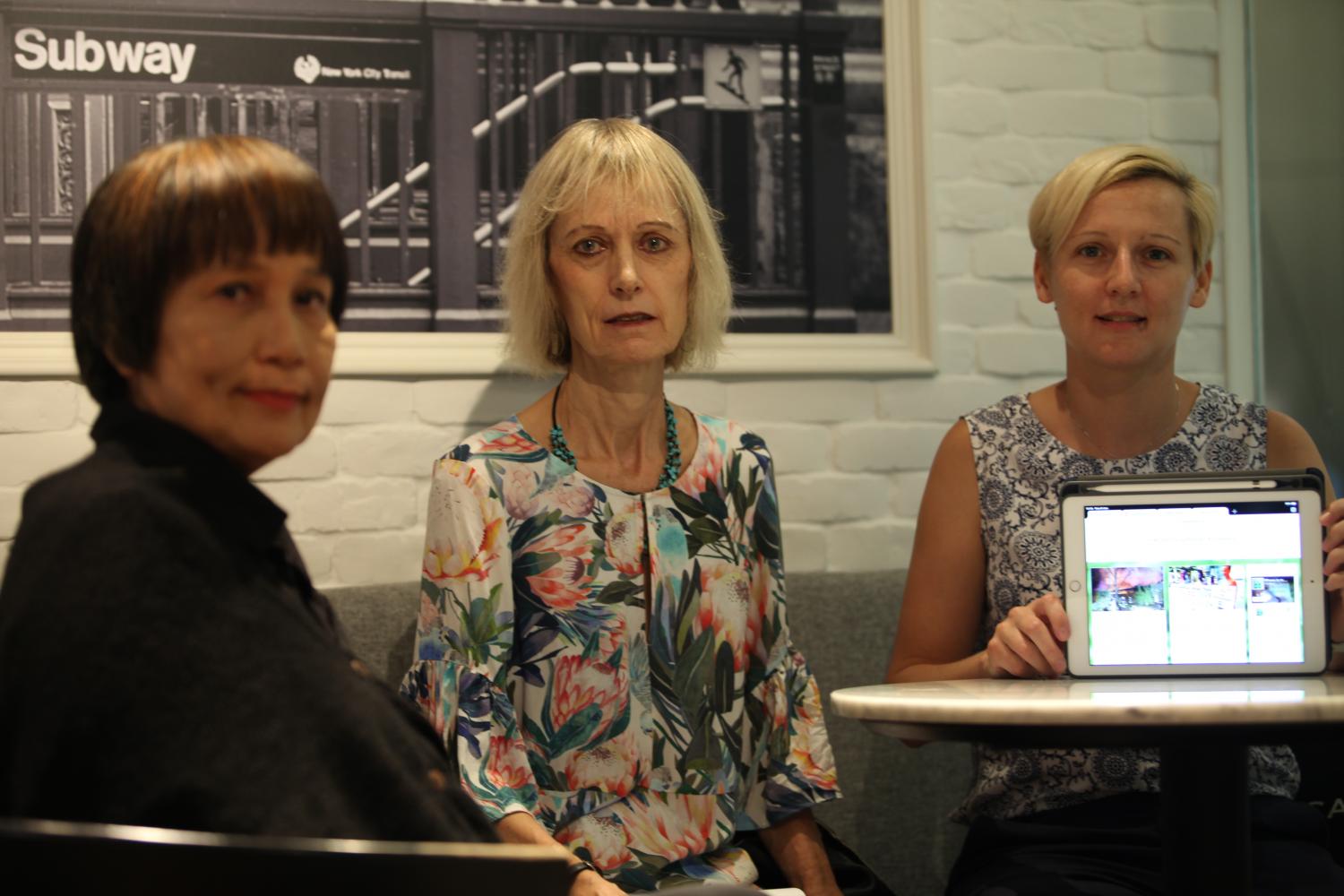 "I won't send Bua Noi to another country. She's a treasure of Thais. I never thought to keep her on the rooftop forever but it's hard to find a partner to invest during slow economic growth. Now, people understand that we are doing our best to take care of Bua Noi. We extend our license every five years and the Department of National Parks, Wildlife and Plant Conservation come to examine our management systems and the standard of animal welfare two or three times a year. If we are doing anything wrong, they can close our zoo at any time."

Veterinarian Benchapol Lorsunyaluck warns that Bua Noi could be at risk of severe bacterial infection if she is relocated to the ground.

"Bua Noi has lived on that rooftop for 30 years. She has never touched the ground before so she has no immunity. Another point is that the gorillas are often vulnerable to respiratory disease -- and Bua Noi has never shared her cage with others.

"I have visited Pata Zoo several times," said Benchapol, who is director of Panalai Veterinary Hospital, and also initiated the Wild Bird Care Project. "The animal welfare is not bad. It's not too crowded. People may be more familiar with open zoos, where animals are walled in with electric fences rather than cages. But no one can guarantee that she would be safe in a new home." 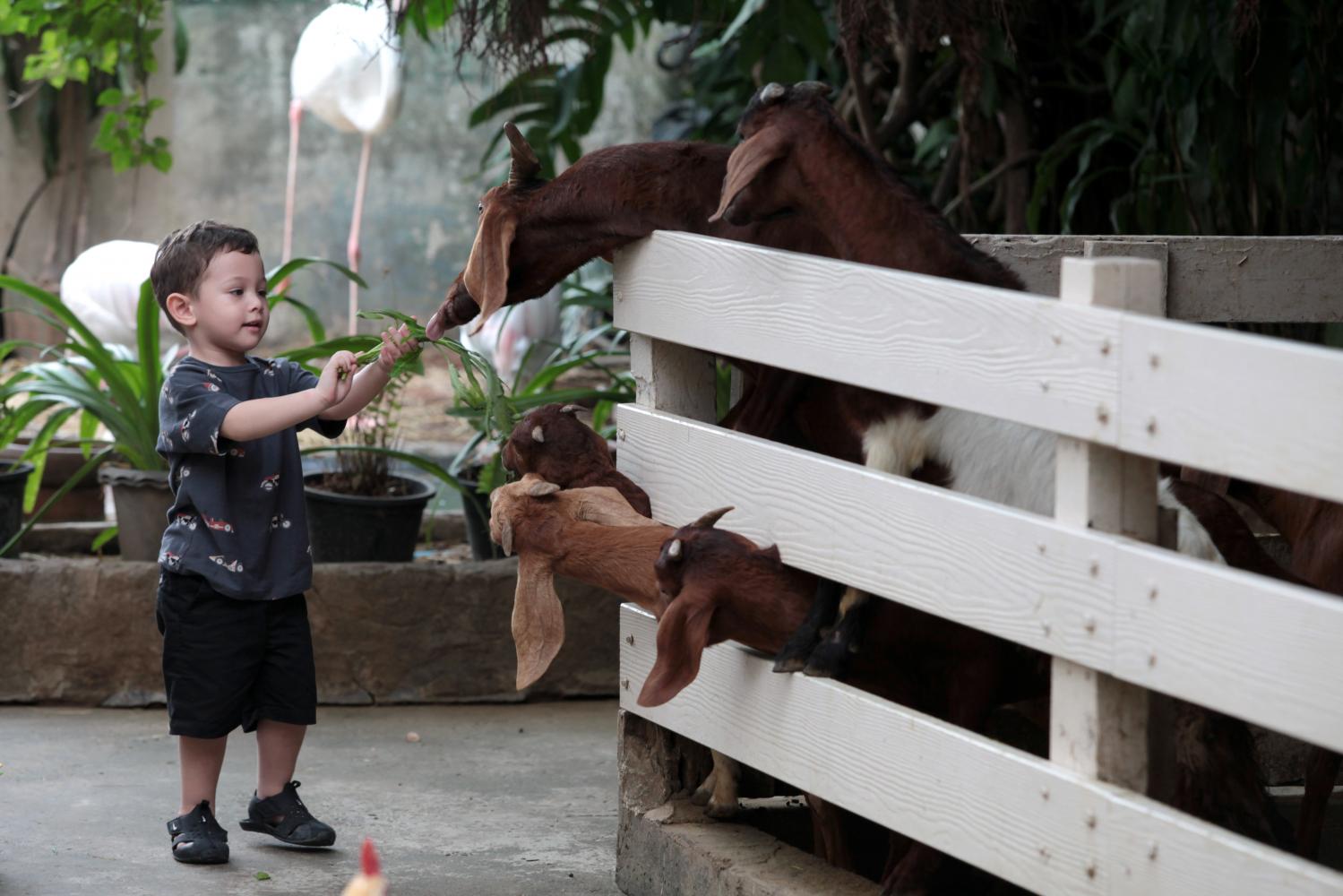