Dining on success of the Korean Wave
Life
Social & Lifestyle

Dining on success of the Korean Wave

As Koreans flock to Thailand, their culture is being embraced

Neon signs written in Hangul adorn shopfronts from which loud K-pop music and the smell of barbecue grills seep into the air. For a moment, it would be easy to imagine this was a scene from Seoul rather than the heart of Bangkok.

Located on the corner of Soi 12 on Sukhumvit Road, Sukhumvit Plaza is informally known as Korea Town in Bangkok because it is filled with floors of Korean restaurants, nightclubs and businesses selling imported Korean products.

"This place is the centre of Bangkok's Korean community. Korean expatriates always come here because it's the best place to eat authentic Korean food and find goods from the motherland. It's a home away from home for us," said Yoon Dae-sook, a 64-year-old Korean entrepreneur who has been living in Thailand for over 20 years.

Ms Yoon, who now owns three Korean restaurants in Korea Town, said her restaurants are packed with customers due to the growing number of Korean expatriates in Thailand and the Korean culture craze known as the Korean Wave.

However, Ms Yoon said, her businesses have not always been in such rude health.

"When I moved here and started running a restaurant 24 years ago, the situation was very different. Back then, there weren't many Koreans in Thailand and Korean food wasn't popular among Thais. But everything changed when the South Korean soap opera Dae Jang Geum started airing in Thailand," she said.

Korean food and culture became incredibly popular in Thailand in the wake of the show's popularity, so she decided to open more restaurants to meet increasing demand. 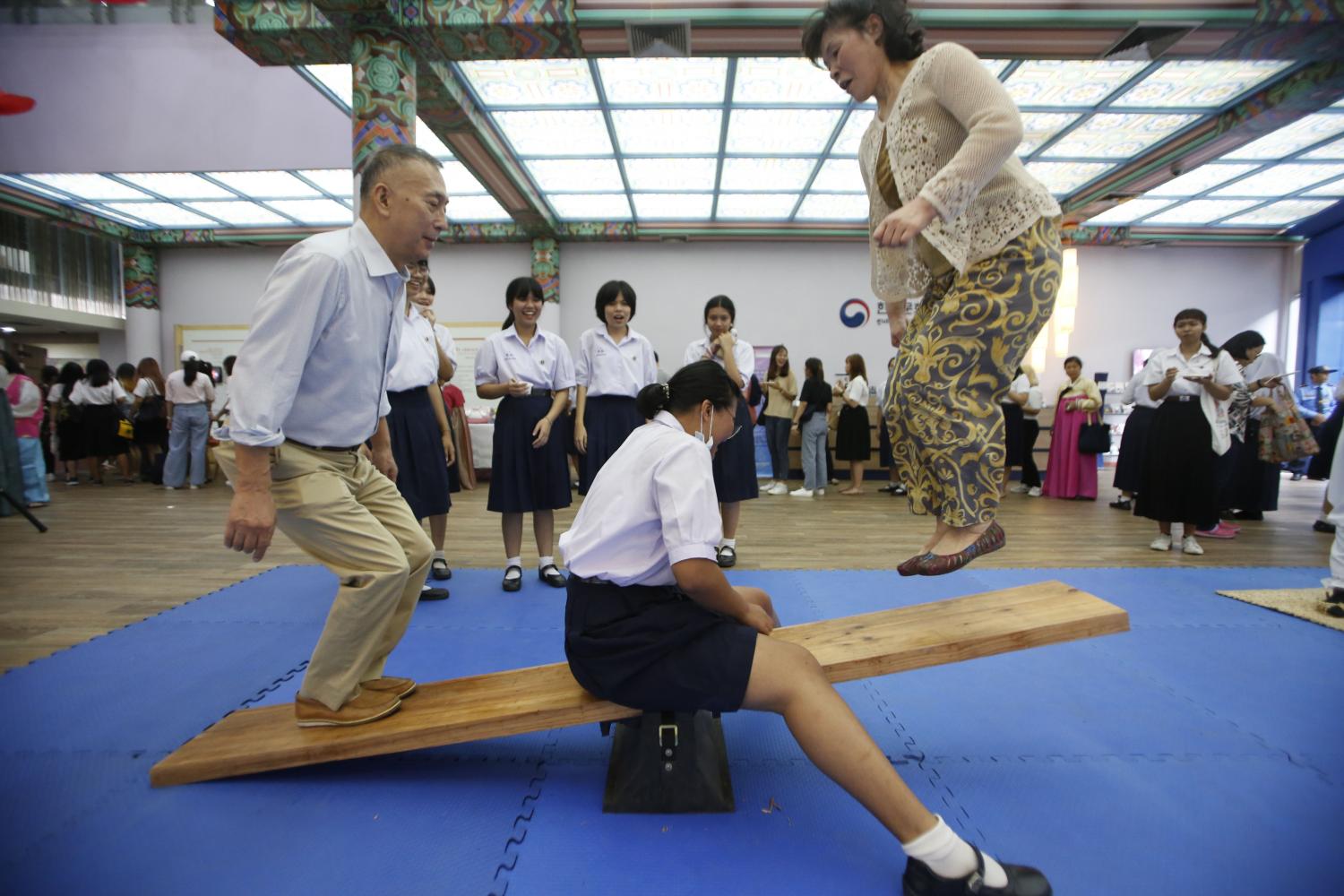 A student sits in the middle of a sturdy plank to stabilise it as two adults play a game of Korean seesaw which is enjoyed standing up.

"Due to these opportunities, more and more Koreans have moved here to do businesses. The small Korean community here has become bigger," she said.

Kim Jong-min, 53, chief editor of Bangkok Information Magazine, an online magazine for Korean expatriates in Thailand, said it's not just business opportunities that have drawn South Korean expatriates to Thailand, but also the weather, cost of living and Thai way of life.

"Most Korean expats in Thailand make a living by running their own businesses such as restaurants, tour companies, entertainment venues, property developments or by working for companies. However, there are also large groups of retirees and young people who want to escape from the stress of Korean society," he said.

Mr Kim said international schools in Thailand are also a popular choice for Korean parents due to their standards, more affordable fees and a reputation for being less stressful environments than schools in Korea. 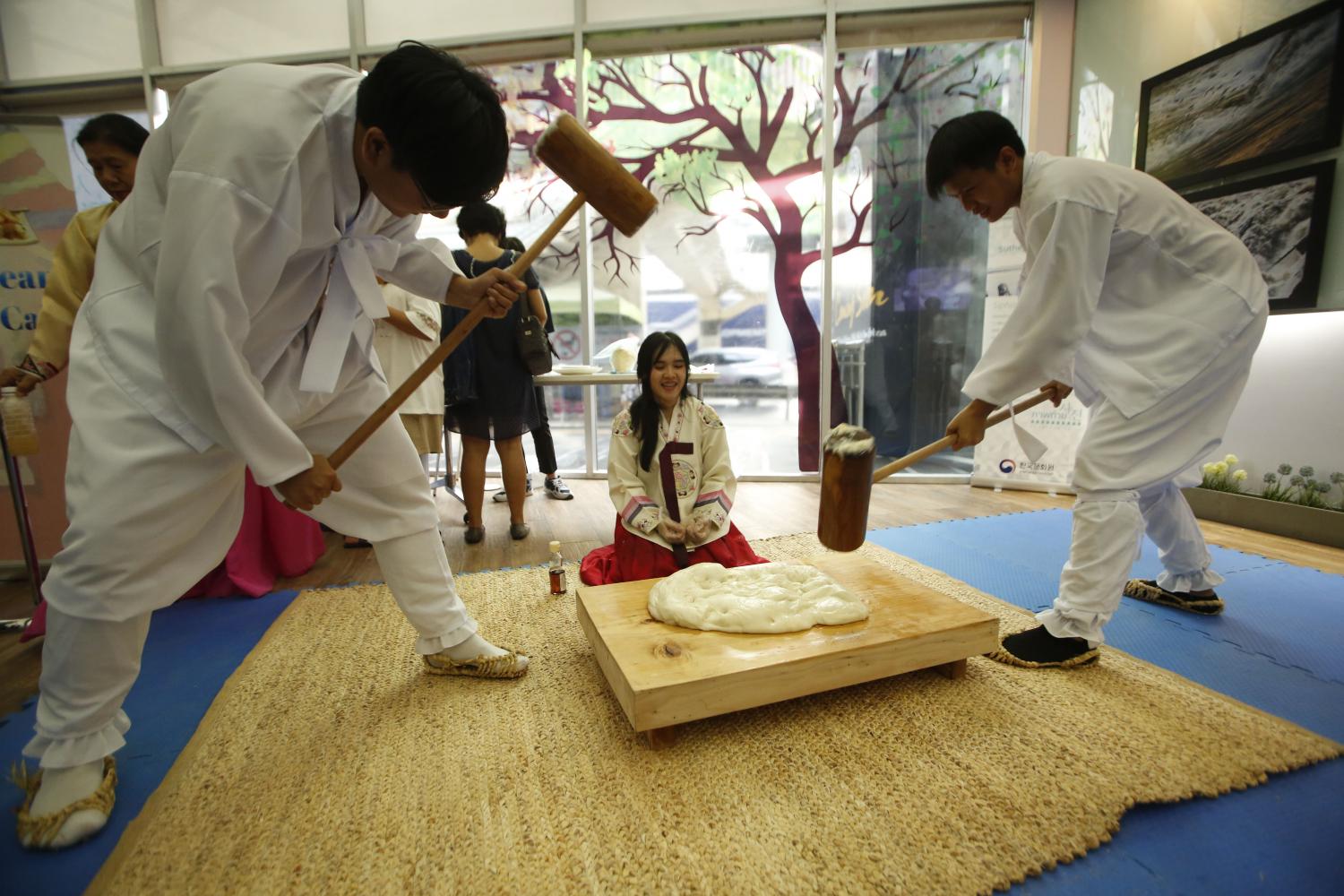 Visitors join a cooking demonstration class at a recent special event at the Korean Cultural Centre.

"There is too much pressure on young people in Korea nowadays, so Thailand was an attractive option for them as life is more relaxed here. For retirees, Thailand is also a popular destination because it is more affordable than living in Korea and the infrastructure here is better than other countries in the region," he said.

Mr Kim said that after living here for 22 years he has also decided to spend his retirement in Thailand.

"Chiang Rai will be my retirement location. It's a peaceful place and still very natural. Thailand is like my second home and I want to spend the rest of my life here," he said.

South Korean ambassador to Thailand Lee Wook-heon said Thailand's image in the eyes of Koreans has always been positive due to the close friendship between the two nations.

In 1949, the Kingdom of Thailand formally recognised the newly independent Republic of Korea, becoming one of the very first group of nations in the world to do so. The Thai government immediately sent a Royal Thai Army regiment to fight side-by-side with Korean and 15 other nations' troops when the Korean War broke out.

"Thailand is a true friend of the Republic of Korea and we will never forget the dedication and sacrifice of the Thai Korean War veterans and remain grateful to this day," he said.

Since diplomatic relations were forged, Korea and Thailand have developed increasingly diverse trade relations. Trade, investment, tourism and social interaction in many other areas have also prospered.

"As Thailand develops the Eastern Economic Corridor for innovative and high-technology industries, I think Korean investment value in Thailand will accelerate," he said.

To date, 400 South Korean companies have invested in Thailand, while the trade value between Thailand and South Korea stands at around US$15 billion (470 billion baht). 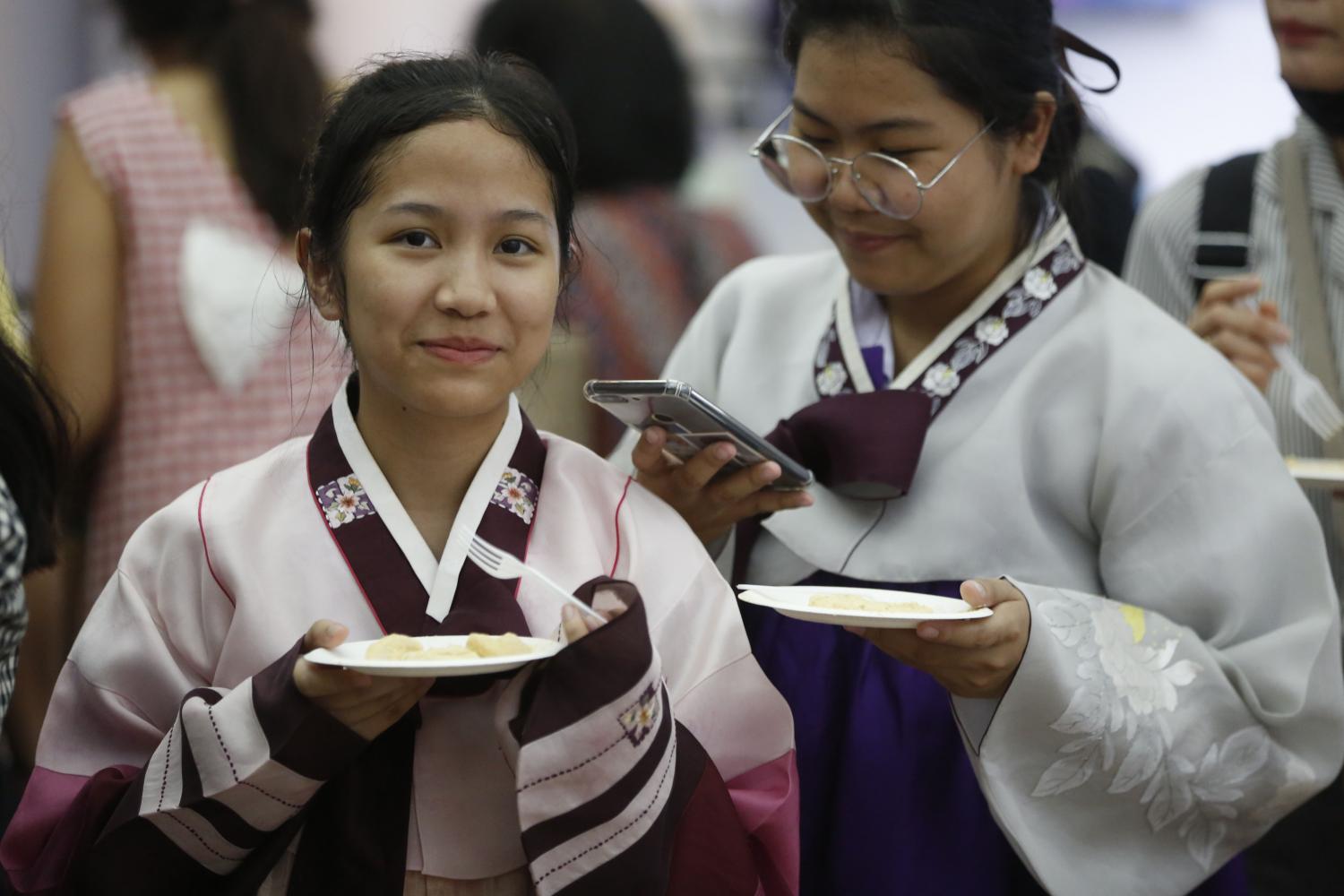 Participants dressed in Korean traditional costume show off the products from their cooking class.