The sound of the marching band sent a wave of excitement through the colourful crowd gathered at the Chiang Mai Religion Practice Center. Rainbow flags were flying. There were people of all ages, and even cute puppies, all eager to take their first steps at the annual Pride parade set in the beautiful northern capital.

Last Saturday, Chiang Mai Pride 2020 attracted hundreds of participants and spectators to its parade, which started at the religion practice centre (also known as Budhastan) and finished at Le DTa'wan Plaza.

At 7pm, the first banner group left the meeting grounds. People were dancing to a medley of Britney Spears' music. There were silver cupids, shirtless men, drag kings, people in wheelchairs, beautiful ladies on traditional tricycles, and many more. The crowd was diverse in nationality, and the atmosphere was fun and friendly. Along the way, there were people on both sides of the street waving and taking pictures, cheering along as some parade participants were chanting: "Love is a human right."

Chiang Mai Pride 2020 has become a much-anticipated event following a successful resurrection last year after a decade-long hiatus. However, the amount of spectators and participants was reportedly less than last year -- an unfortunate impact of the coronavirus scare that has hit tourism in Chiang Mai.

Chiang Mai and LGBTI Pride have had a long history together and, unfortunately, it's a rather violent one. On Feb 21, 2009, the second Chiang Mai Gay Pride attracted national attention after protesters surrounded parade participants and stranded them inside Budhastan.

"Political groups were actively against us, accusing us of propagating homosexuality. People said our activity was a disgrace and a shame to the beautiful culture and tradition of the North. Some locals also believed that having gays and katoeys parading down the streets would bring about the downfall of this holy city," said Sirisak Chaited, an independent activist. They were among the organisers of the 2009 Pride, and still remember that day vividly.

A year prior, the first-ever Chiang Mai Pride went on without a hitch, though its scale was much smaller. In its second year, the organiser planned to expand the event and named it Gay Pride, just as many other cities have done. It is believed this triggered violent reactions from protesters.

On that day, hundreds of protesters came to Budhastan and blocked people from leaving and entering the venue from 4pm. They were cursing and throwing things at participants, who then decided to sit down and meditate as a sign of peaceful protest while curse words raged around them. Some also climbed a fence to flee protesters.

"Protesters gave us an ultimatum, that we had to cease all Pride activity, and that there can't be a Chiang Mai Pride for another 1,500 years. The most hurtful thing was that they demanded we crawl and apologise at their feet, like we're not even humans."

At 10pm, six hours into the protest, the organisers agreed to cease Pride events for people's safety. Participants held a candlelight vigil, released the few balloons they had left, and disbanded.

The 2020 Pride event marks the 11th anniversary since the incident, and Feb 21 is now remembered yearly in Thailand as End of Violence Against LGBTI Day.

For the past decade, there has been an attempt to reignite the Chiang Mai Pride movement, though Sirisak admitted that people were still afraid. It wasn't until recent years that the conversation regarding LGBTI rights has become more widespread in the country. And with the Gender Equality Act in place, people also have more courage to push ahead with advocacy.

"There have been more young people joining the cause, too. The new generation wanted to see Chiang Mai Pride happening again. They were ready and eager. And with their support, along with all other partners and organisations, we were able to pull it off last year," said Sirisak.

Chiang Mai Pride now serves as a remembrance of history and also a celebration of diversity. It's also a place to advocate for marriage equality and gender recognition. Within the parade, different groups also joined in, including sex workers, disabled people, youth organisations, indigenous groups and more.

"There are LGBTI people in all dimensions. And all can join in regardless of their age, gender and occupation. Foreigners are also very much into our activity as well. They feel our incident resonates with theirs, like the Stonewall uprising. This is an international movement," they said.

The LGBTI rights movement is also trans-generational. In recent years, it is interesting to witness new faces of young advocates and groups in Thailand taking a stand and speaking up for their causes and expressing the vision of the world they want to live in, where everyone has equal rights and no person or group is discriminated against. The movement that began decades ago by pioneers has inspired today's youths to continue their work.

University student Patchaya Khamkaew, 20, joined Chiang Mai Pride last year. This year, they decided to return as a volunteer in hopes that, with more hands helping, greater things can be achieved.

"I saw these activists as my idols," said Patchaya. "They dared come out when society wasn't open and took a stand in calling for justice. And I think if I could do that one day too, that would be great.

"To my generation, I think the concepts of diversity and equality have become a norm. But it's not the same with the older generations. They don't share these ideas. And this is why we have to do something."

Last year's Chiang Mai Pride ambassador, Nonie Wachirakanok, may have an idea why youths have been very active and vocal in the advocacy scene lately.

"We're growing up with the internet, and it is the worst thing. It makes us know things very early, and thus forces us to grow up sooner. We have information and we can compare how things are in other countries. The knowledge from the West is also seeping in. And so we know ways to go against our own culture when it can't be adapted to today's reality anymore. The new generation isn't having it. We've had enough of old beliefs and ideals. It's not the truth. Adults have been fooling us and we're losing trust," said Nonie.

She has spent the past year in her role as Pride ambassador, acting as a spokesperson at different events to advocate for LGBTI rights, as well as the rights of disabled and indigenous people. As of the past weekend, she has finished her year-long mission and aims to continue working as an activist.

Looking toward the future, Nonie suggested that advocacy can be modified, and not simply rely on old mechanisms of the past that haven't been too effective.

"We need truth, justice, human rights and democracy. It's like we're attacking a demon -- a dark shadow that looms over democracy. And as youths, we're like flickers of candlelight. What can we do in this fight? We can reach to the spotlight that can pressure this demon from the outside, like the United Nations.

"Then, also working from within, we can join hands and combine forces. Wait for the time when we can replace these adults in the future. Not to continue the mission or legacy that they leave behind, but we'll tear it down and build a new one. We can make equality and justice happen. We can set a new standard," said Nonie. 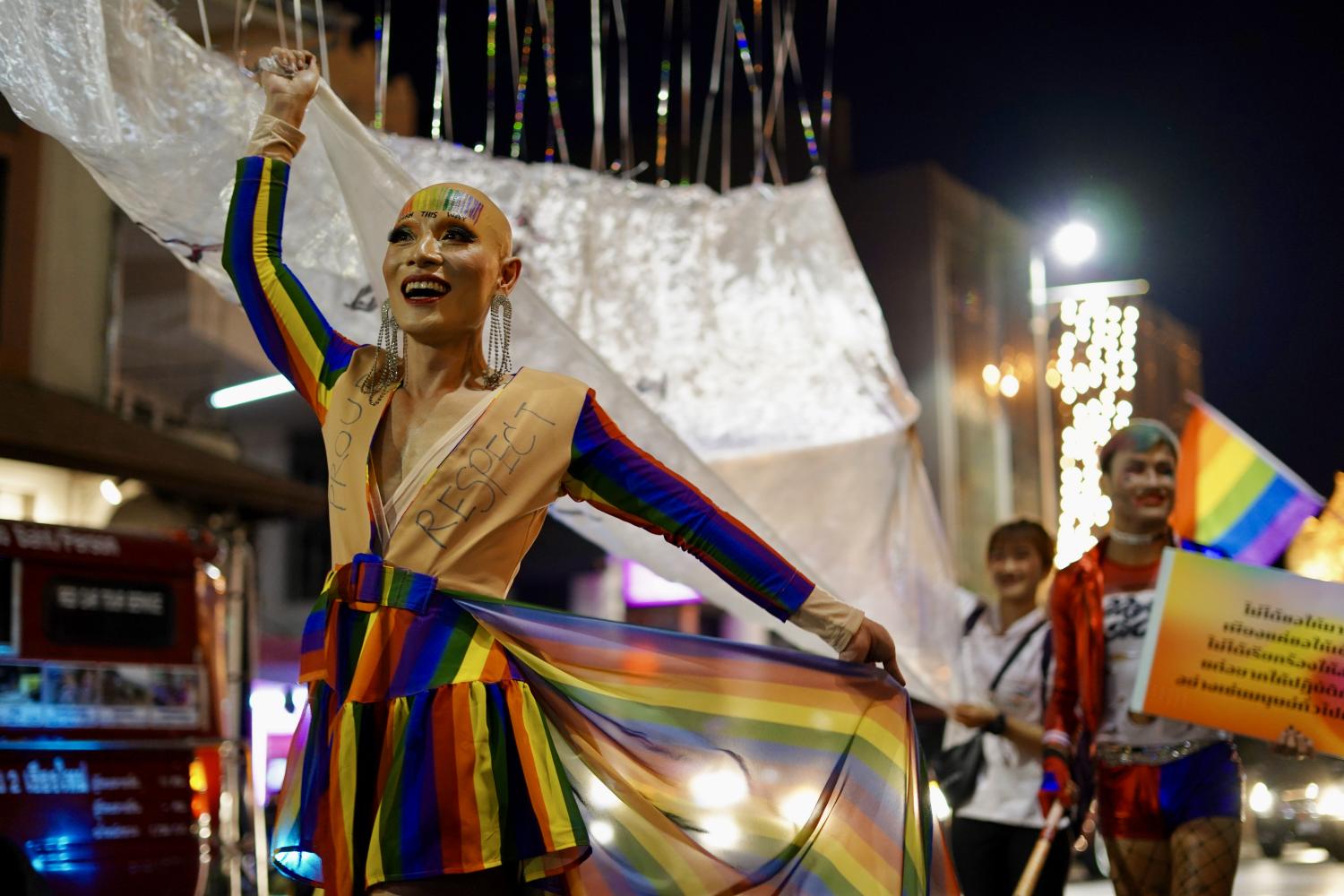 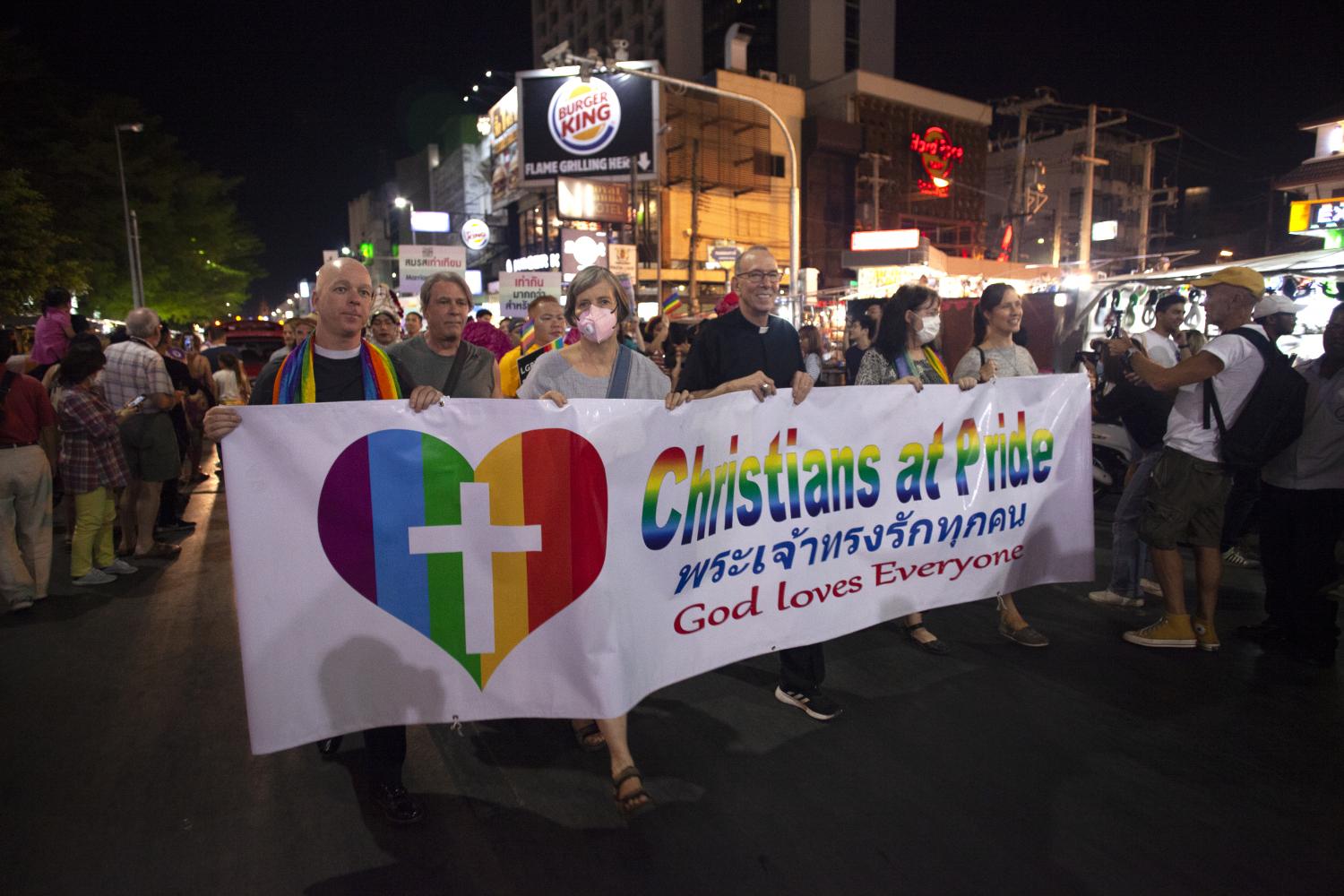 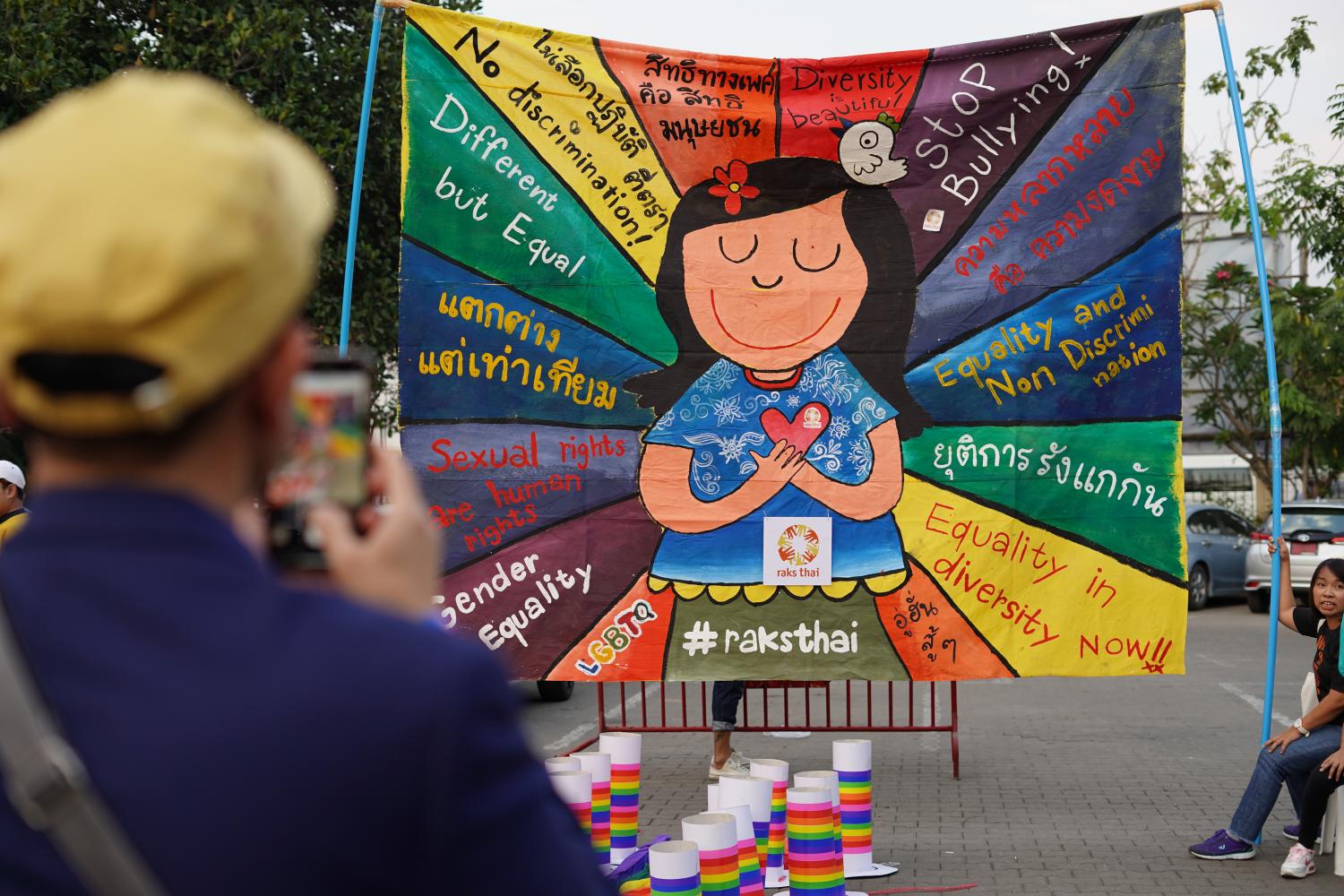 A banner advocates equality and the end of violence. Photo: Melalin Mahavongtrakul 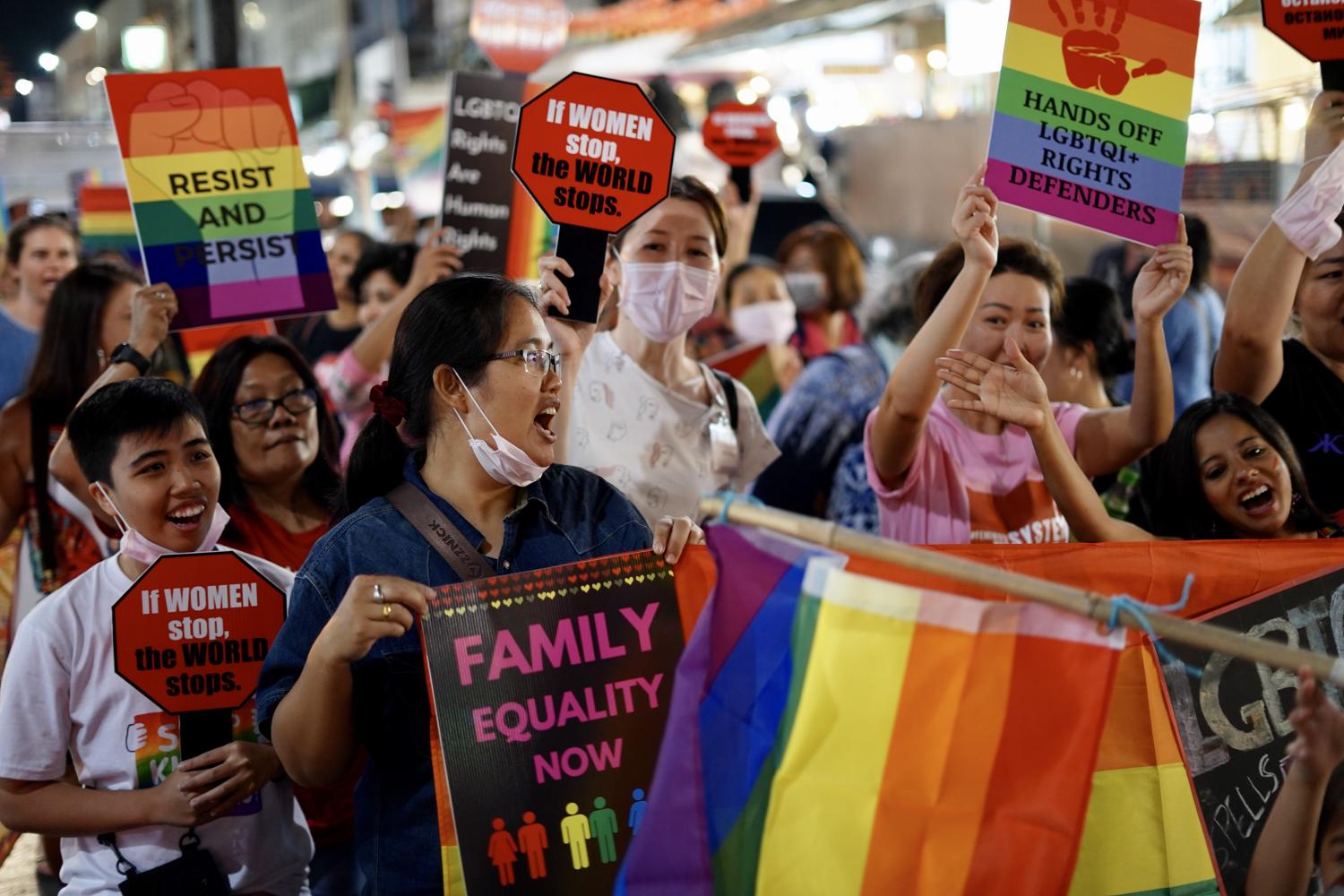 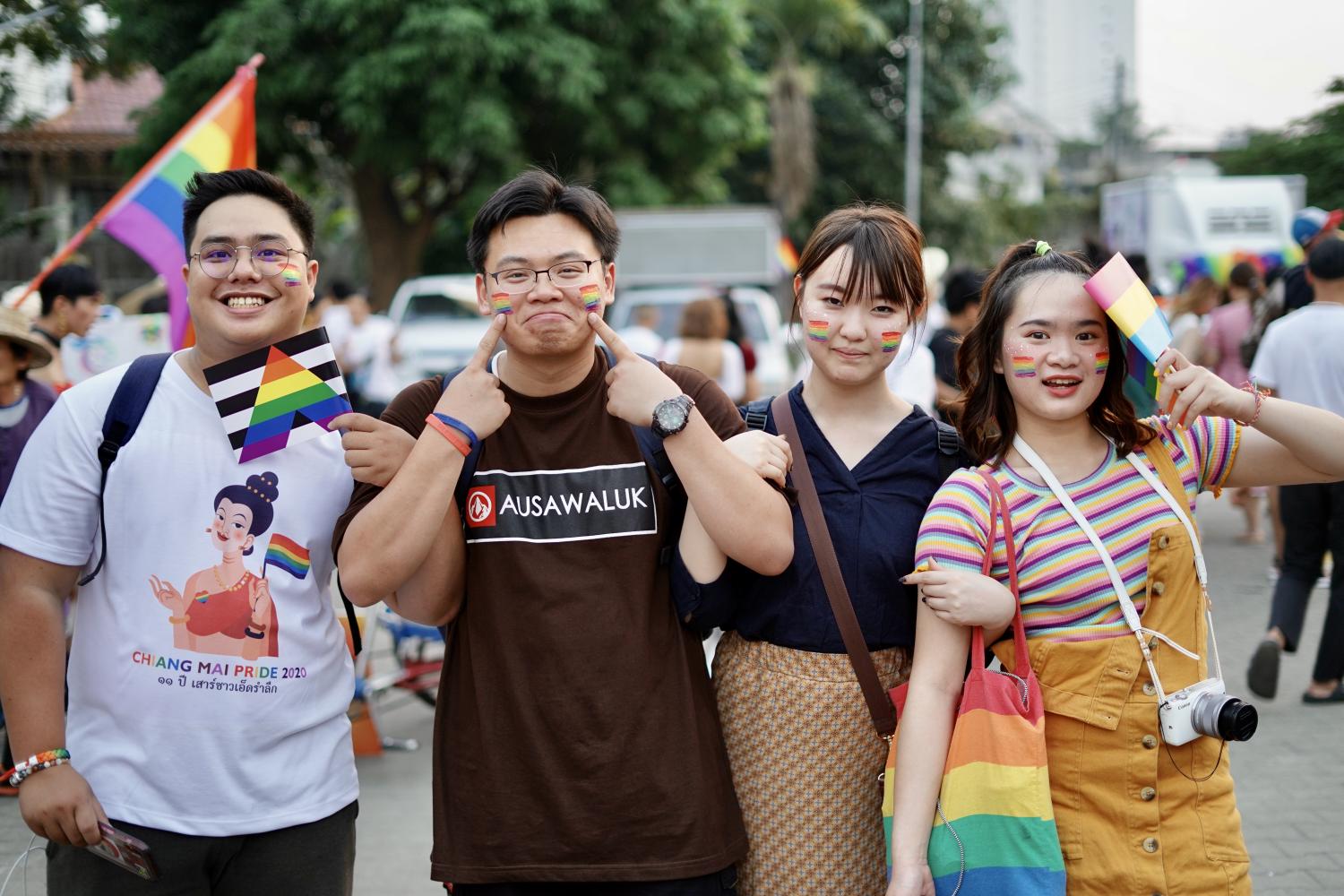 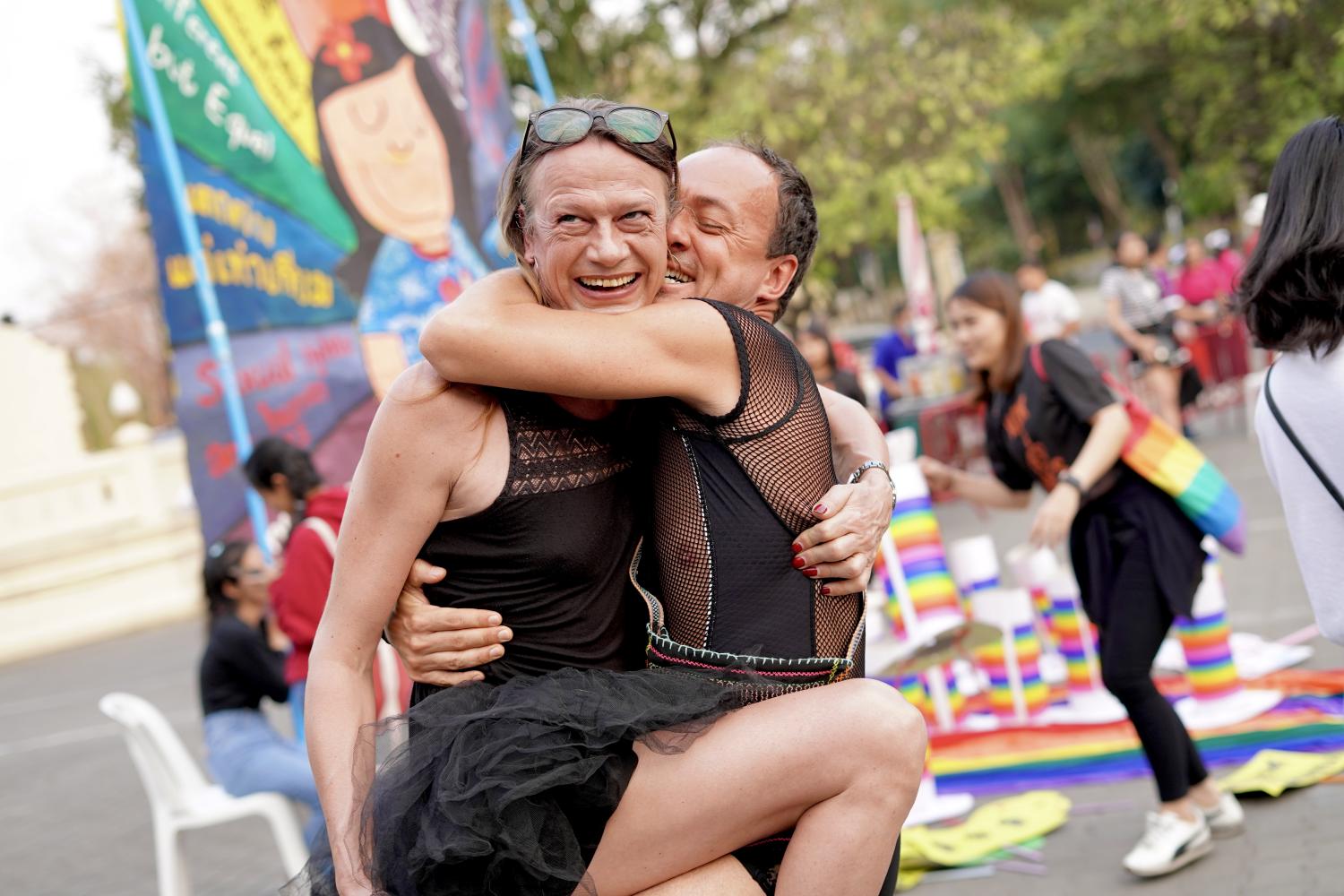 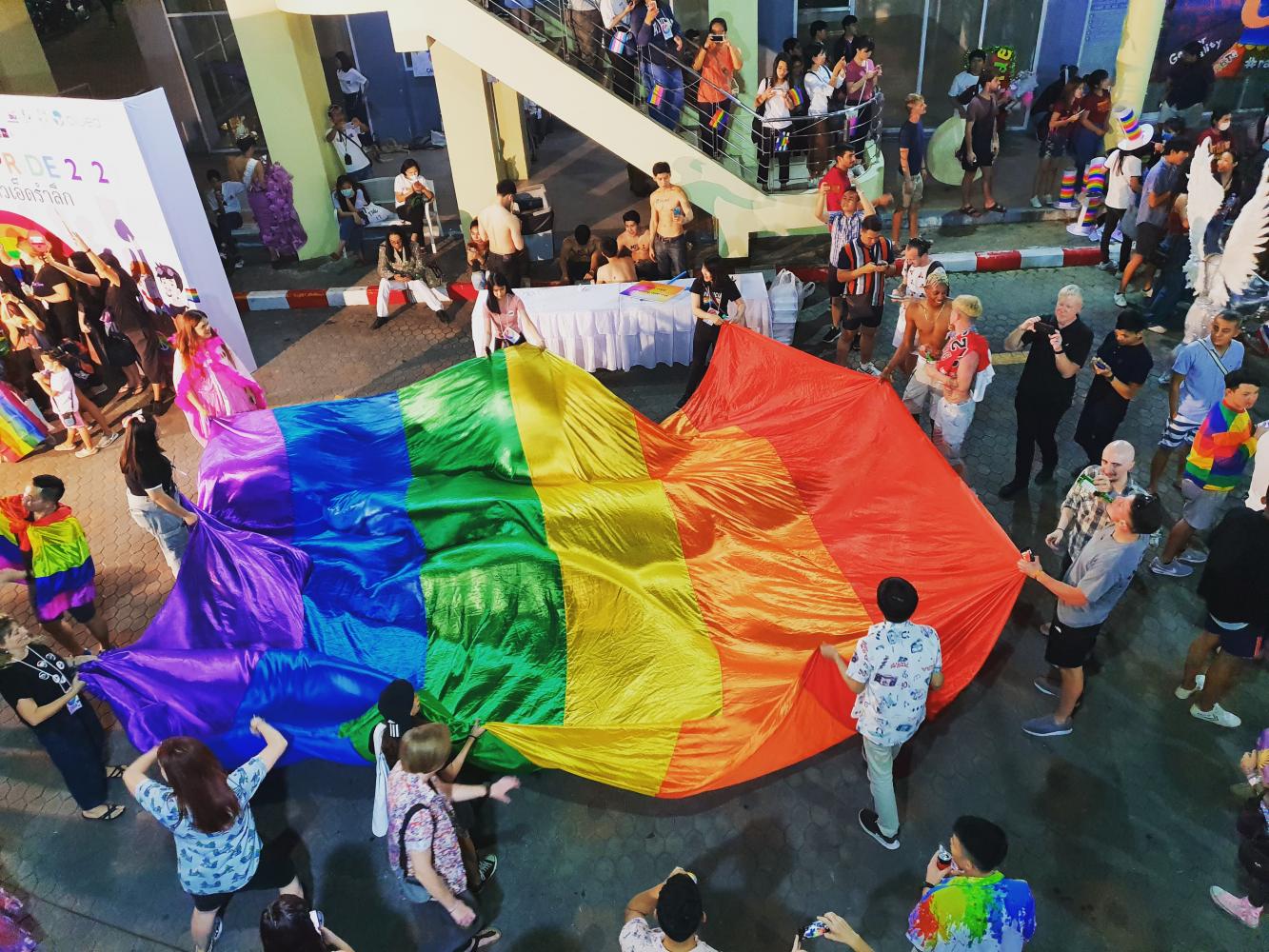 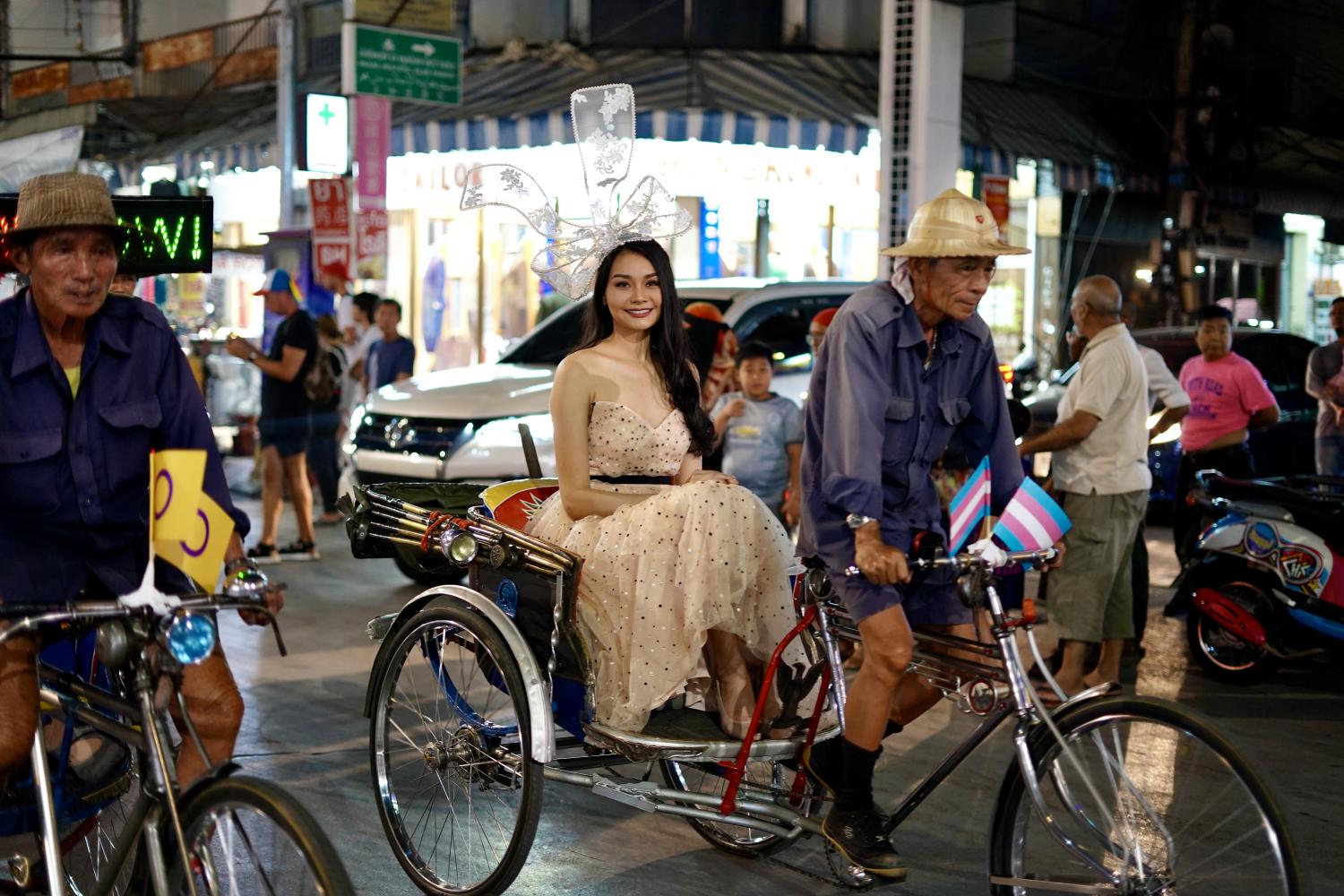 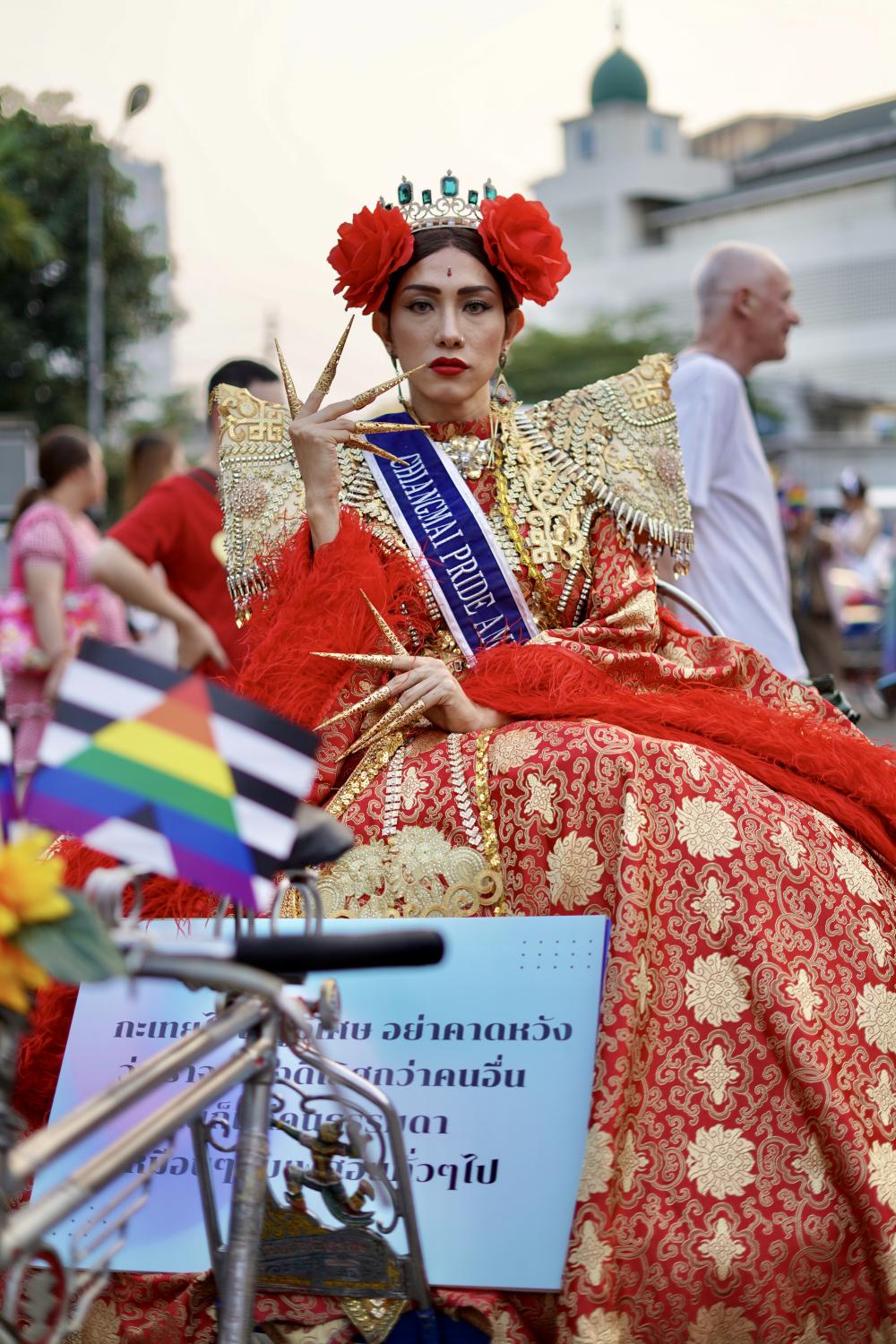 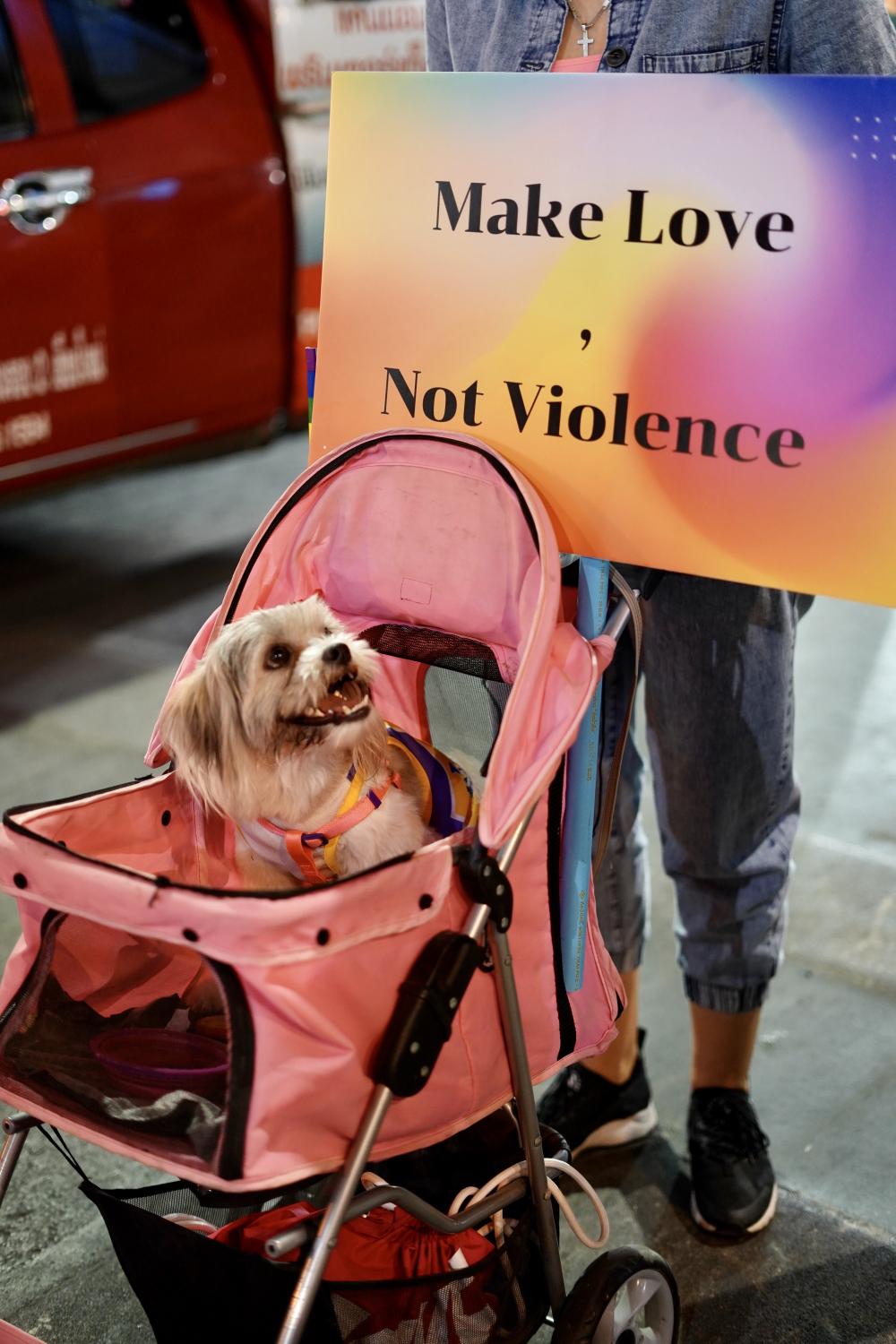