Another day in paradise
Travel

Another day in paradise

published : 27 Feb 2020 at 04:01
newspaper section: Life
writer: Story and photos: Pongpet Mekloy
Myanmar's Mergui Archipelago has been open to visitors for quite a while. However, with strict tourism control most of the islands are still in pristine condition. Merely a few have accommodation for tourists, and on each of those islands, there is only one operator that won the concession to run the service. The beach in the main picture is on Pila Island, where Awei Pila Resort is located. The property's luxury tented villas blend in so well with the vegetation lining the beach you can hardly spot them until you get onshore. Underwater, the situation may or may not be as ideal. I went snorkelling at a site off another island about 45-minutes' boat ride from the property. The water was greenish and not so clear that day. The other four guests joining the diving trip told me they found the corals around Myanmar islands further south and closer to Thailand were more lively and fun to explore. Photo credit

A dessert vendor in Kawthaung, Myanmar's southernmost town, asked me in Thai if I was a Thai.

"Thammai phut Thai dai," I expressed wonder at her abilities to speak my language. She smiled and replied that she had spent six years in Ranong. 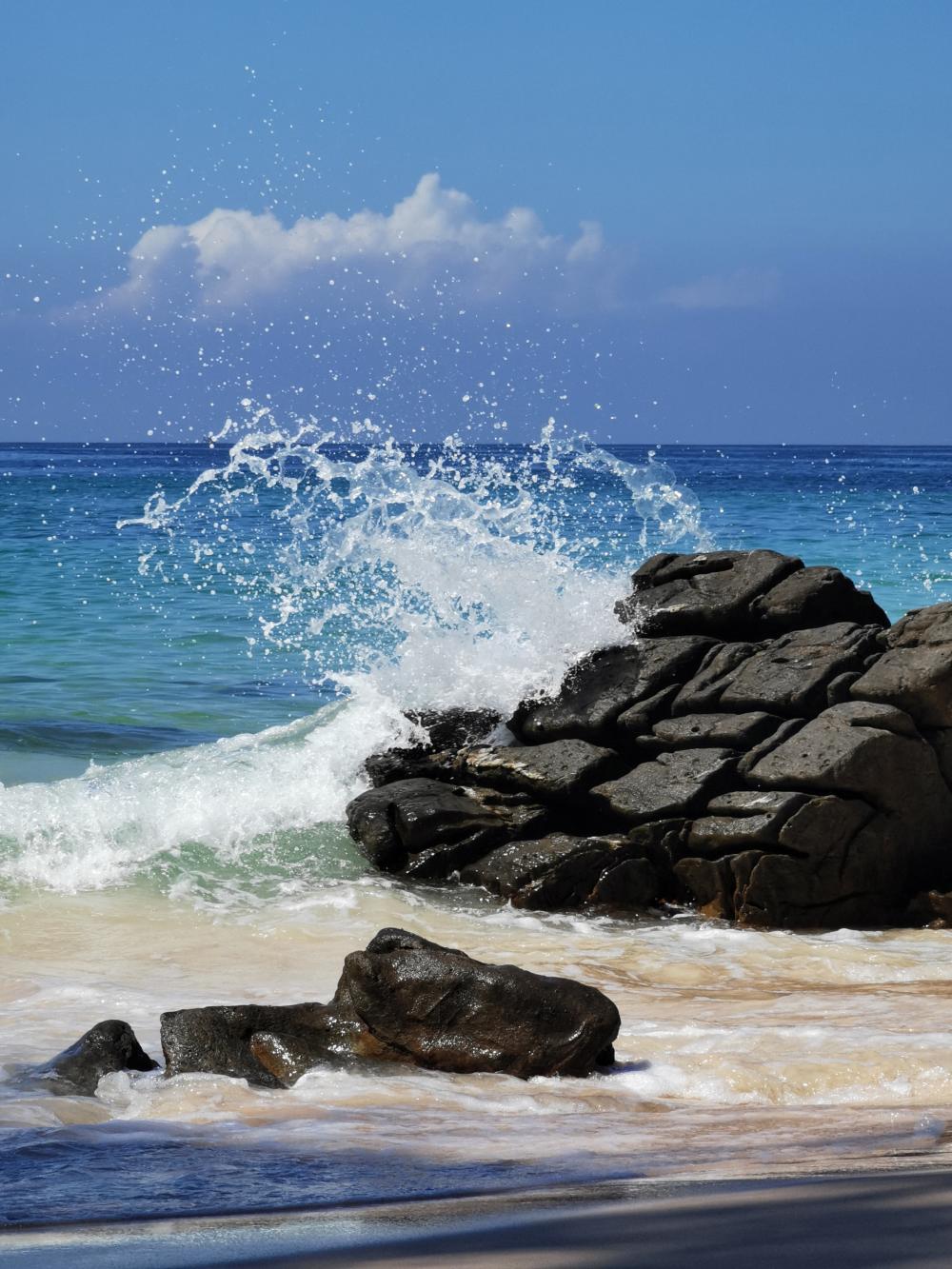 Actually, I shouldn't be surprised. There are so many Myanmar nationals working in Thailand. And Ranong, where I crossed the border from, is one of the cities with a large number of Myanmar workers.

Exploring Kawthaung on foot while waiting for the staff of Awei Pila Resort who greeted me as I got off the transborder boat, I met a few more amicable locals who spoke Thai to me. In Bangkok, I must admit, their accent might sound funny but here on this side of the border, it made me feel warmly welcome. 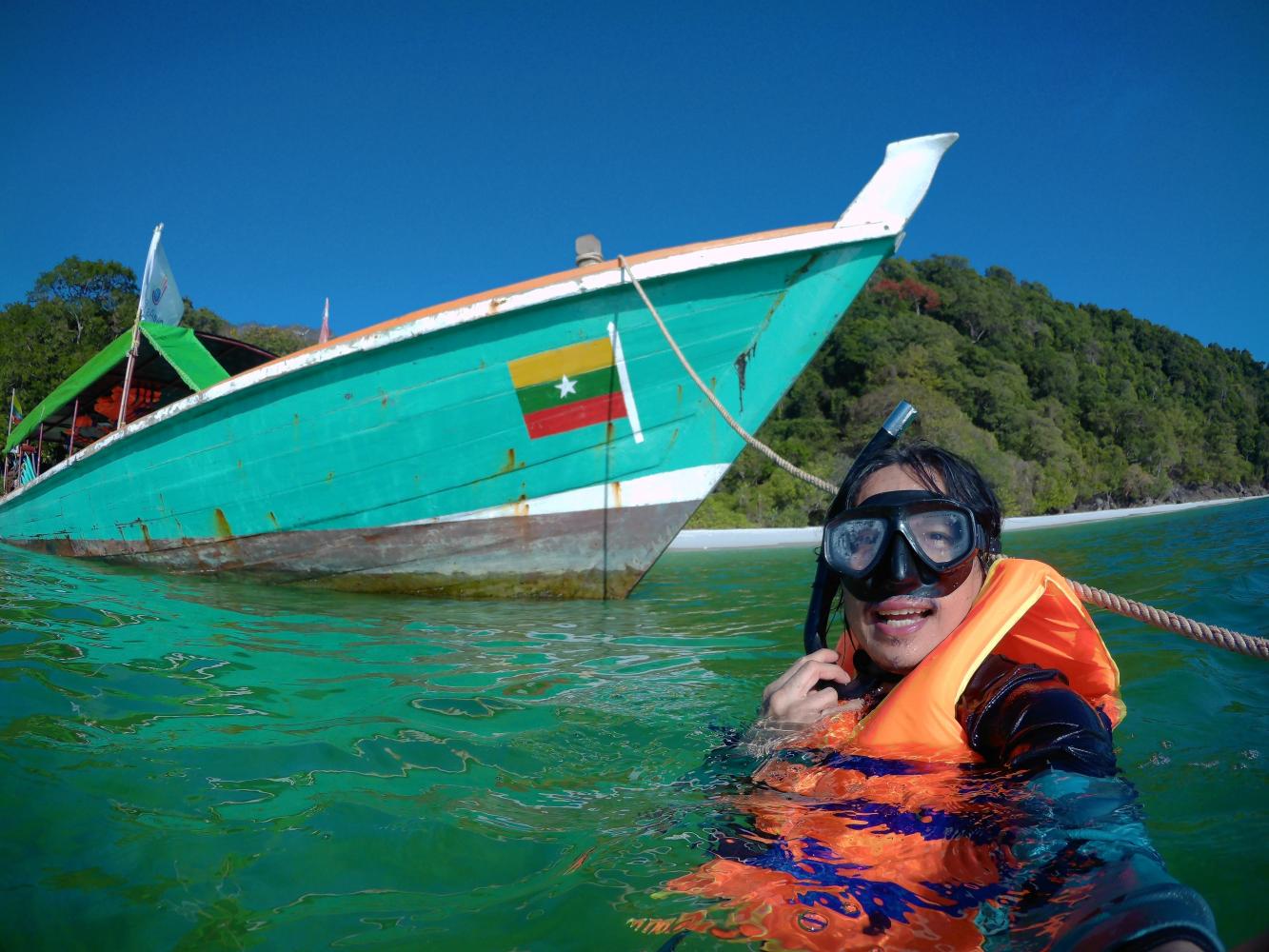 Soon after lunch, I walked back to the pier to meet the said staff. He led me and other guests to the speed boat that would take us to Pila Island where the resort is located.

While better-known islands of the Mergui Archipelago such as Nyaung Oo Phee, Cock Comb and Cockburn are not so far from Ranong, Pila is located further north. Even with the powerful speedboat, it took us two hours to get there.

But the long boat ride was worth it. Pila Island and this part of the Mergui Archipelago reminded me of Mu Ko Surin, the group of islands off Phangnga's Kuraburi just south of Ranong. It was like I travelled 30 years back in time before mass tourism invaded. Thanks to Mu Ko Surin's status as a marine national park, much of the natural environment on the islands are still in decent condition. But with very few tourists, Pila is virtually undisturbed. From the beach where the exclusive resort is located, I looked out to the sea, and all the way to the horizon, except for the resort's own vessels, I saw no other boat. For Thai islands sharing the Andaman Sea, this is a rare sight.

At the resort, I met a guide who spoke fluent Thai, a Thai spa manager and four Thai guests from Ranong. For my new Ranong friends, holidaying in the Mergui Archipelago is easy. For a Bangkokian like me, it's not much different. I just needed to add a short flight from the capital. 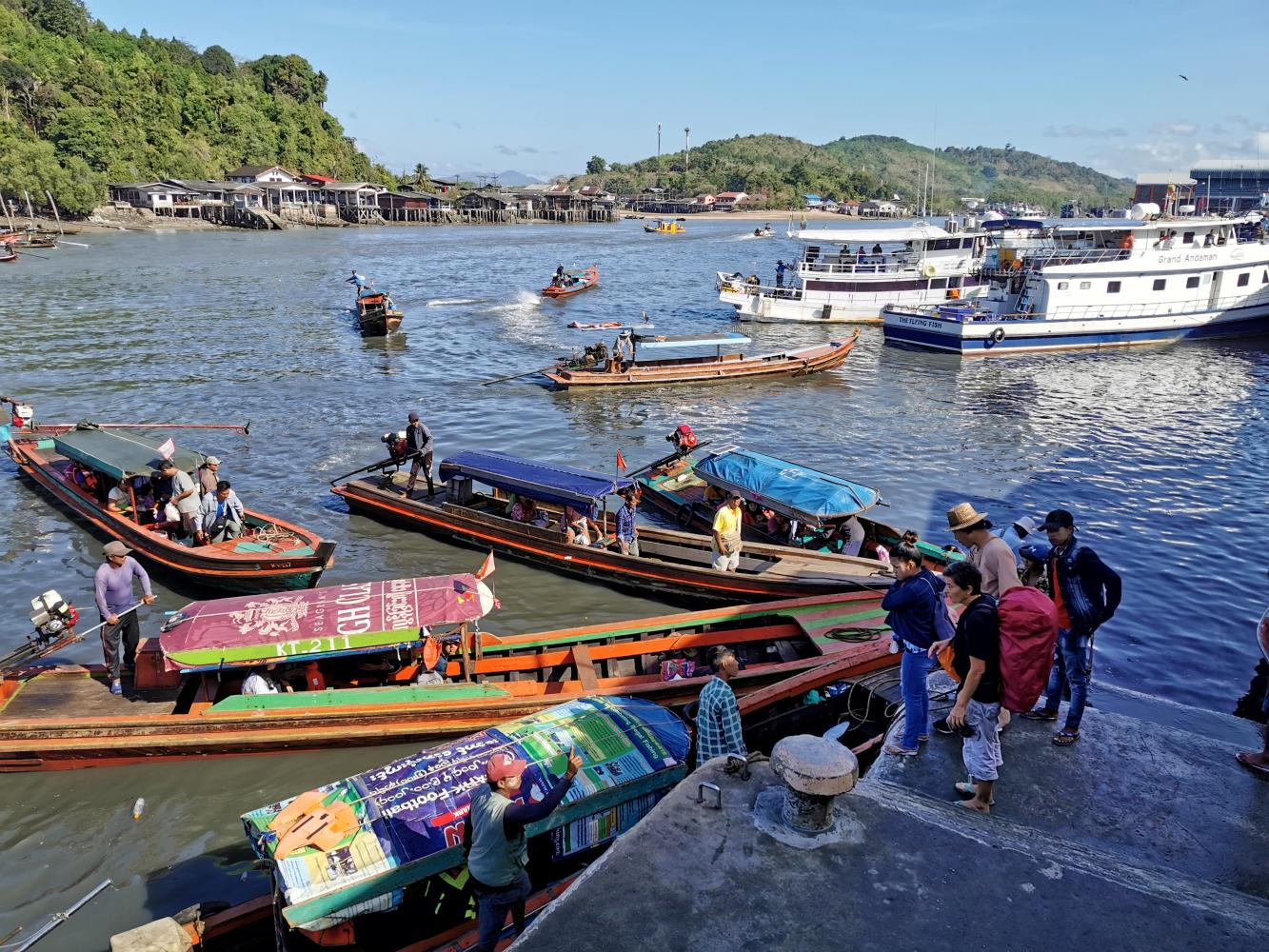 Crossing the border from Ranong to Kawthaung is a lot simpler than it seems. After a quick initial check of your travel document at the immigration booth located right at the Saphan Pla pier, you can take one of these long-tail boats to the checkpoint near the open sea and on to Myanmar's southernmost town. On the way, your boat will pass Koh Sarani, an islet with a golden statue of Guanyin Chinese deity. It serves as a military checkpoint. 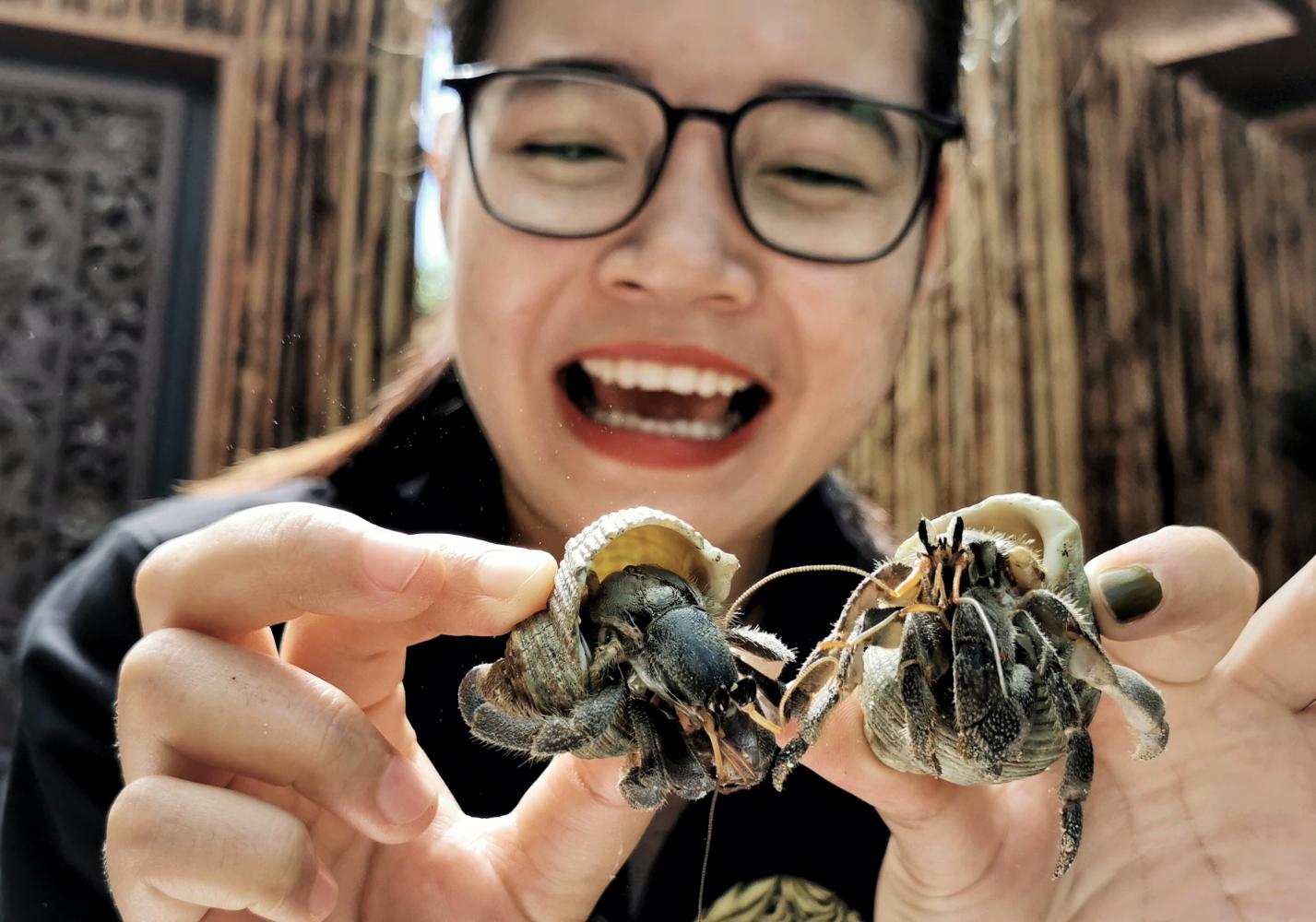 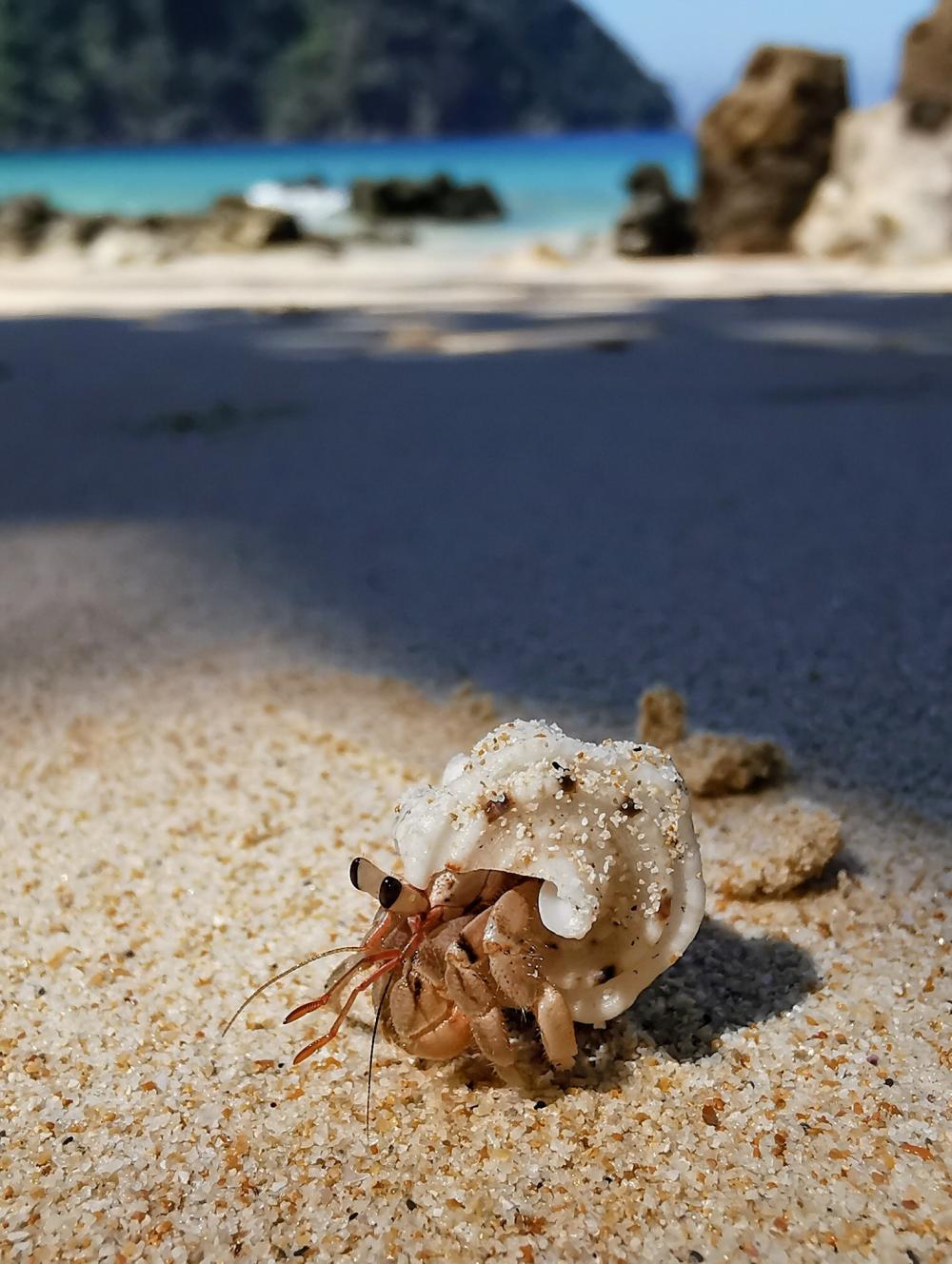 On the beaches of Pila Island, you'll find more hermit crabs than humans. 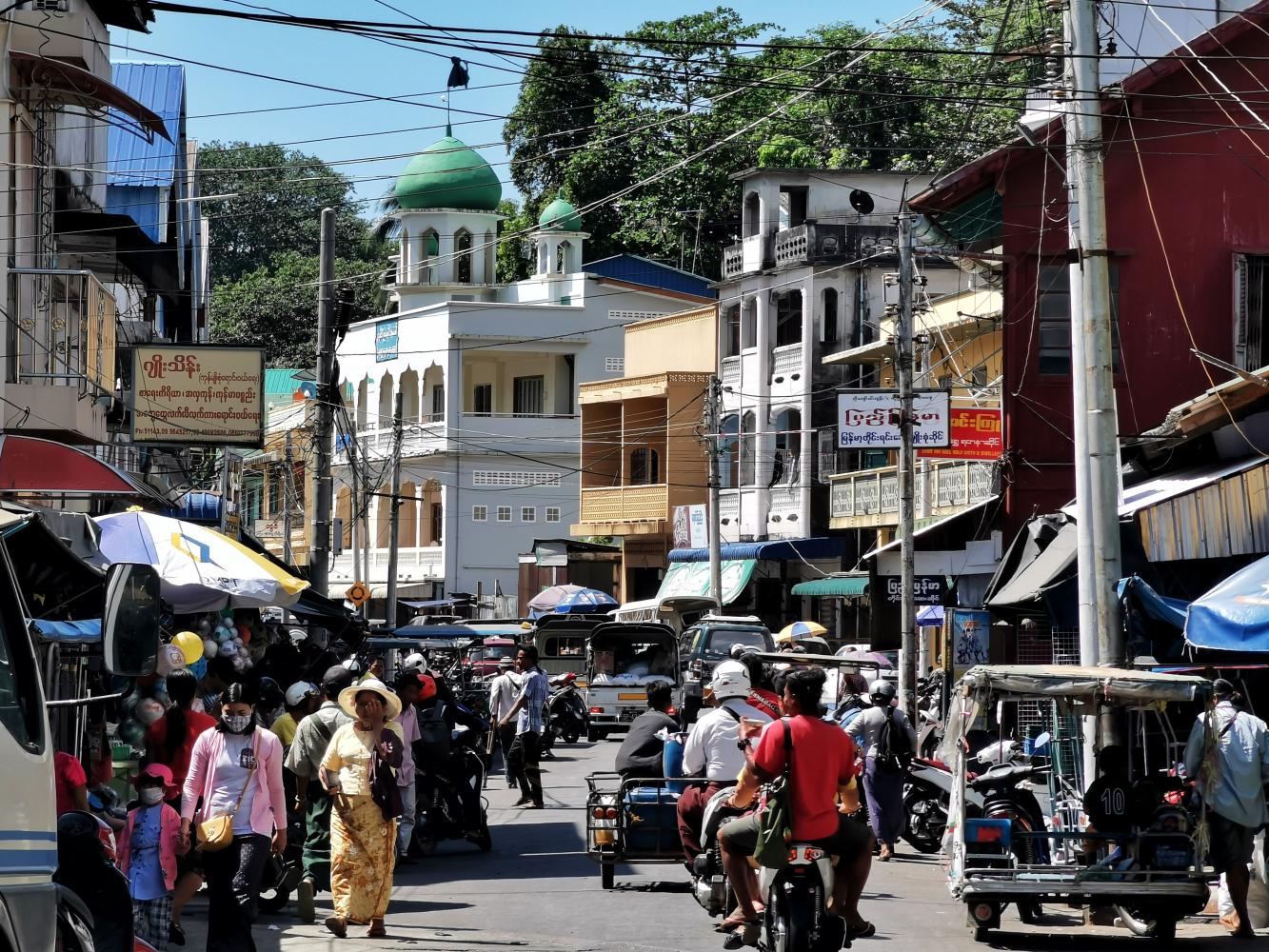 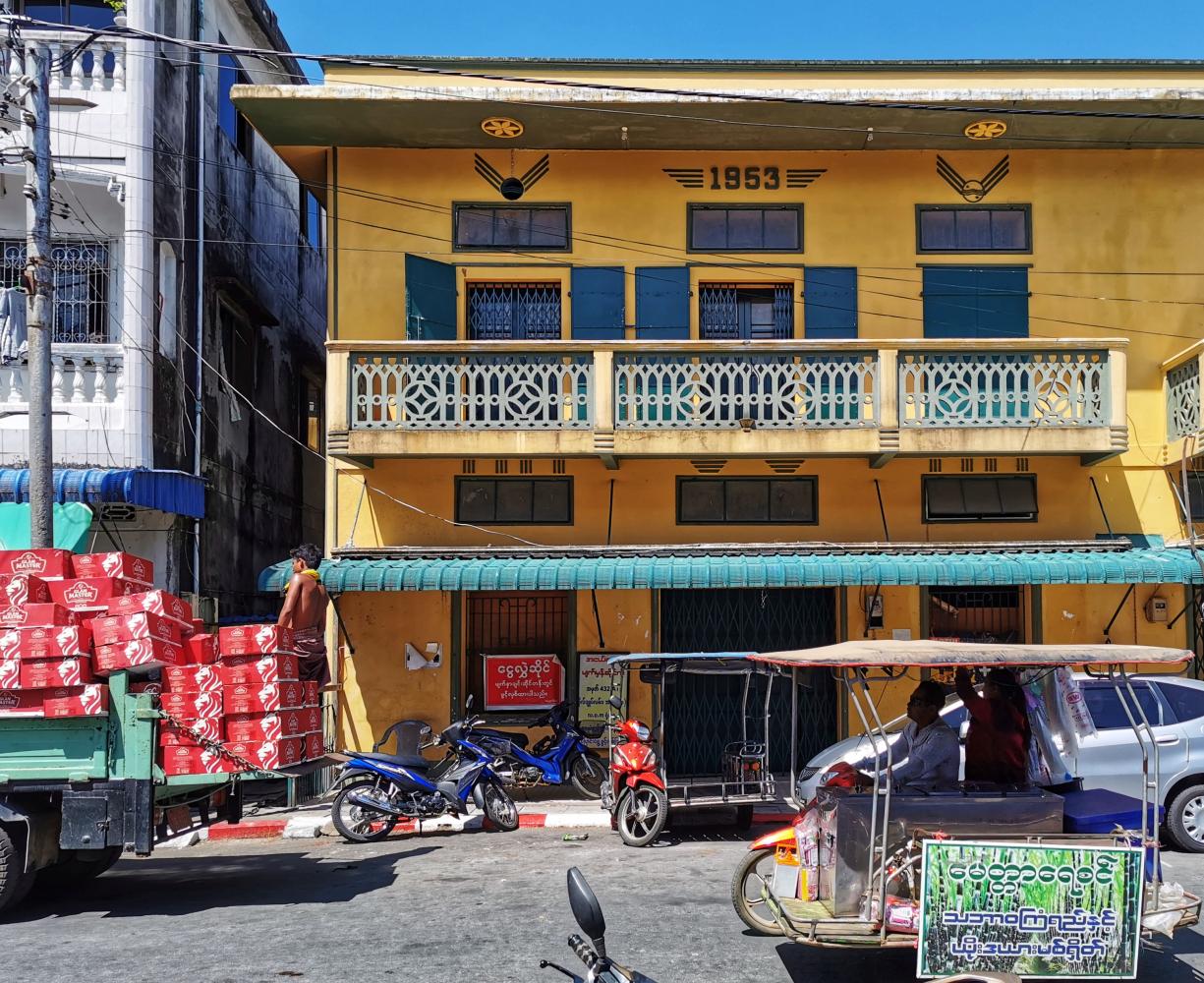 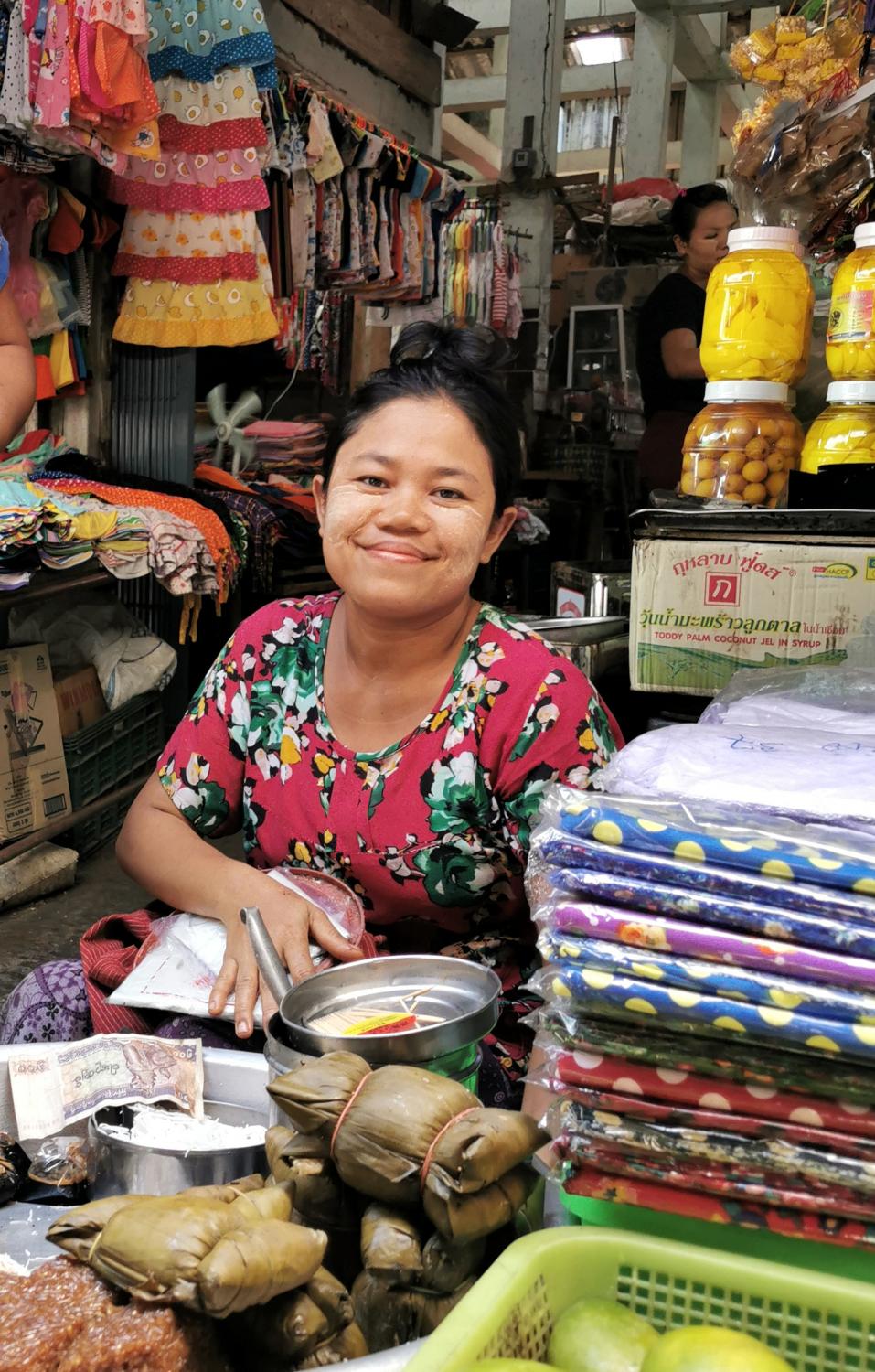 Situated at the southern tip of Myanmar, the border town of Kawthaung is home to friendly people of diverse ethnicities and cultures, from Bamar, Mon and Thai to Malay and Indian, among others. Quite a few of the locals can communicate in Thai; some have crossed to Ranong many times. Roaming the town's streets and market, and visiting some places of worship, can make a worthwhile experience. 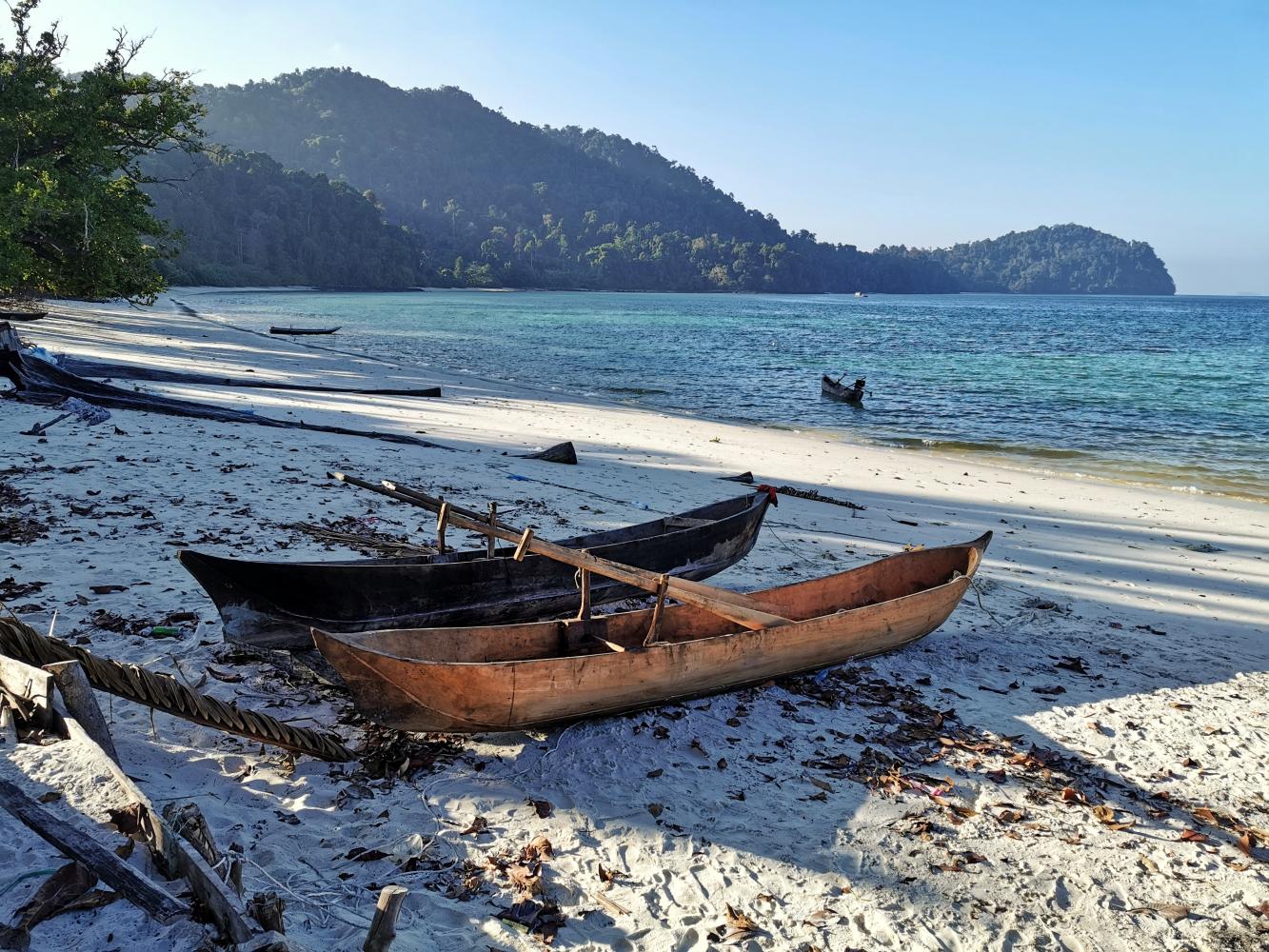 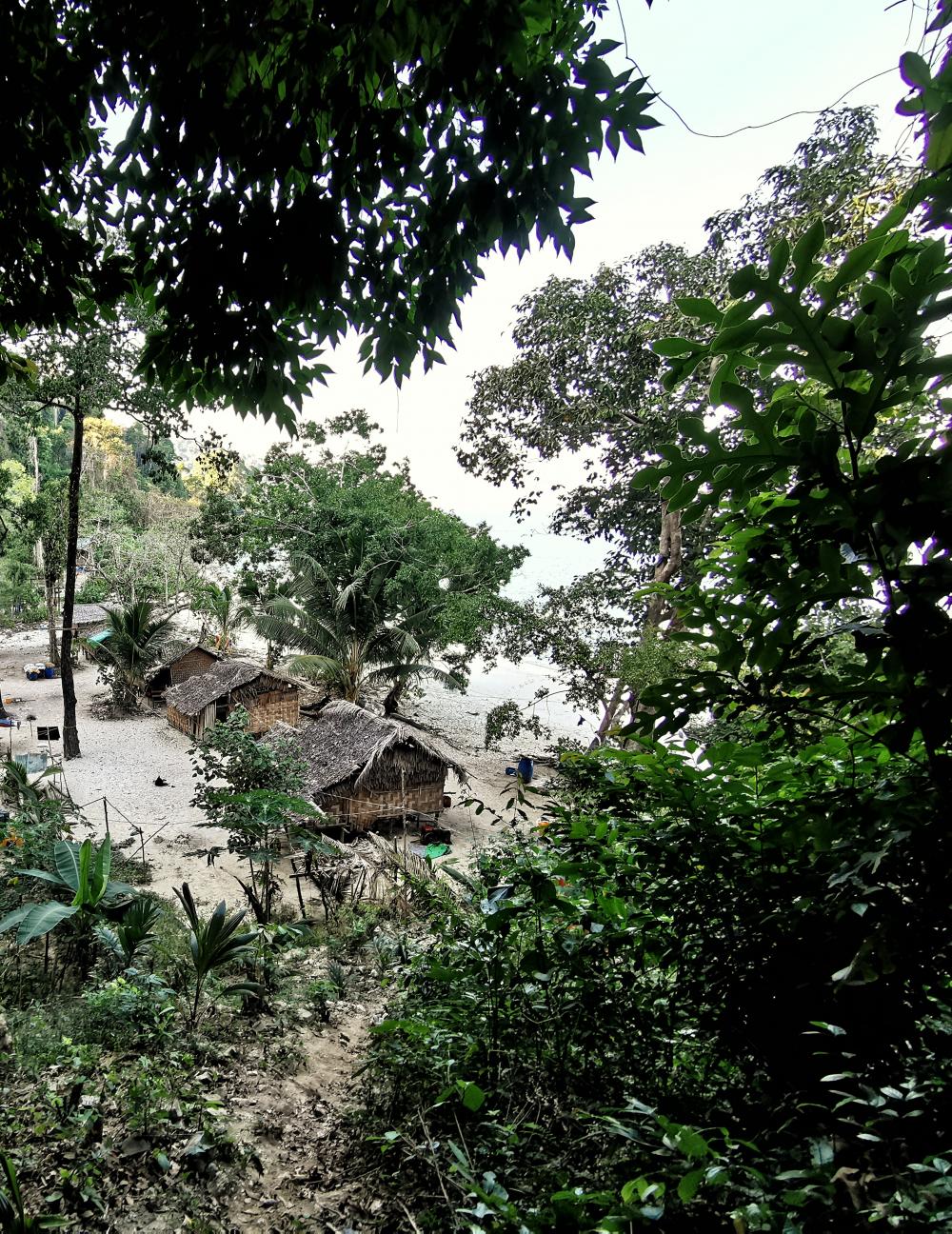 On Pila Island, there are two communities of Moken, the gypsies of the Andaman Sea. Like in Thailand, most of the Moken here no longer lead a nomadic life. They have settled on land. However, fishing continues to be a major part of their livelihood. So are their traditional dugouts, called kabang. From Awei Pila Resort, I joined a trekking trip to these villages on the other side of the island. These seafarers now keep a lot of dogs. But that, of course, is not the only change that is happening in the communities. Gambling and alcohol consumption should be curbed before it's too late. 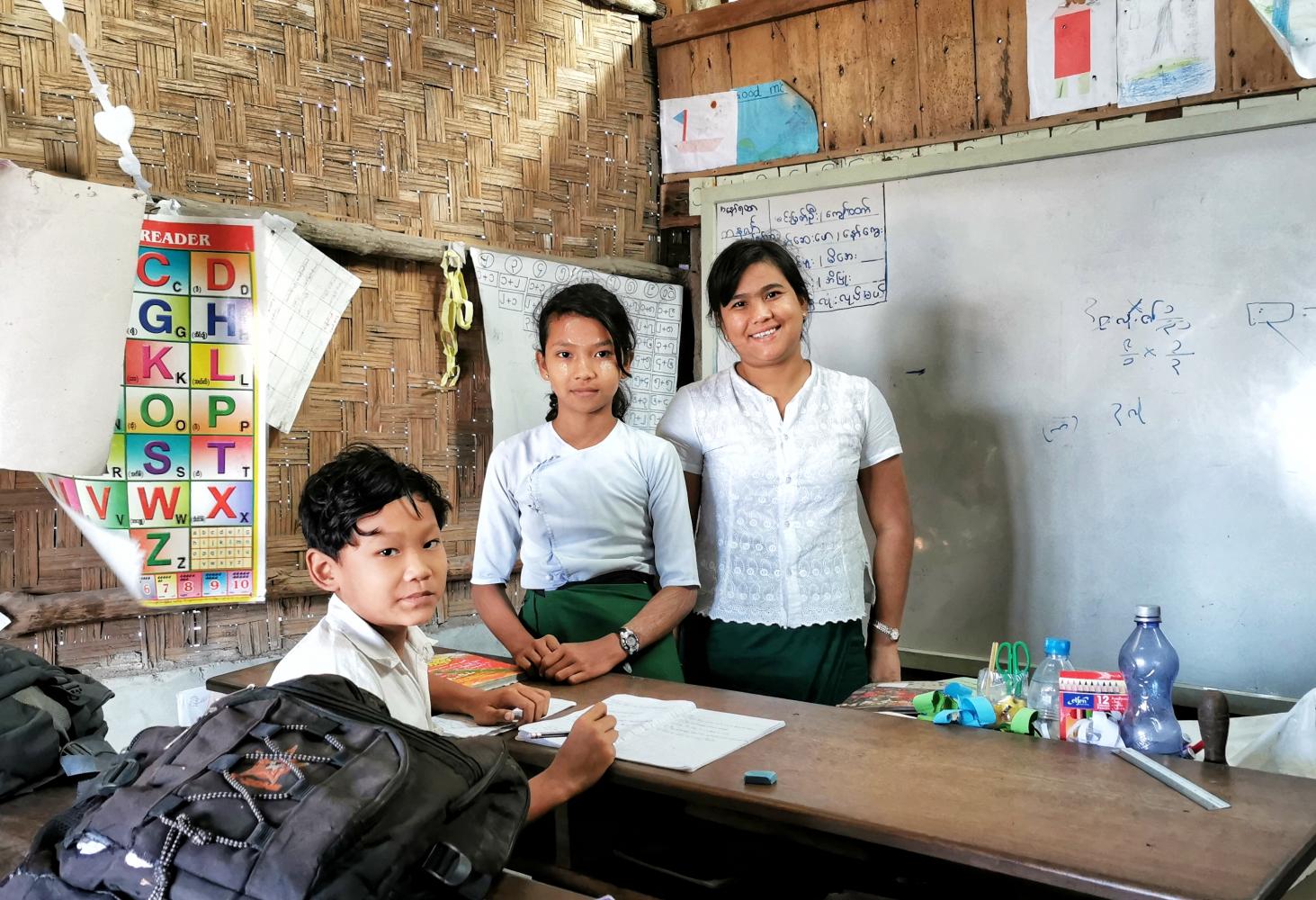 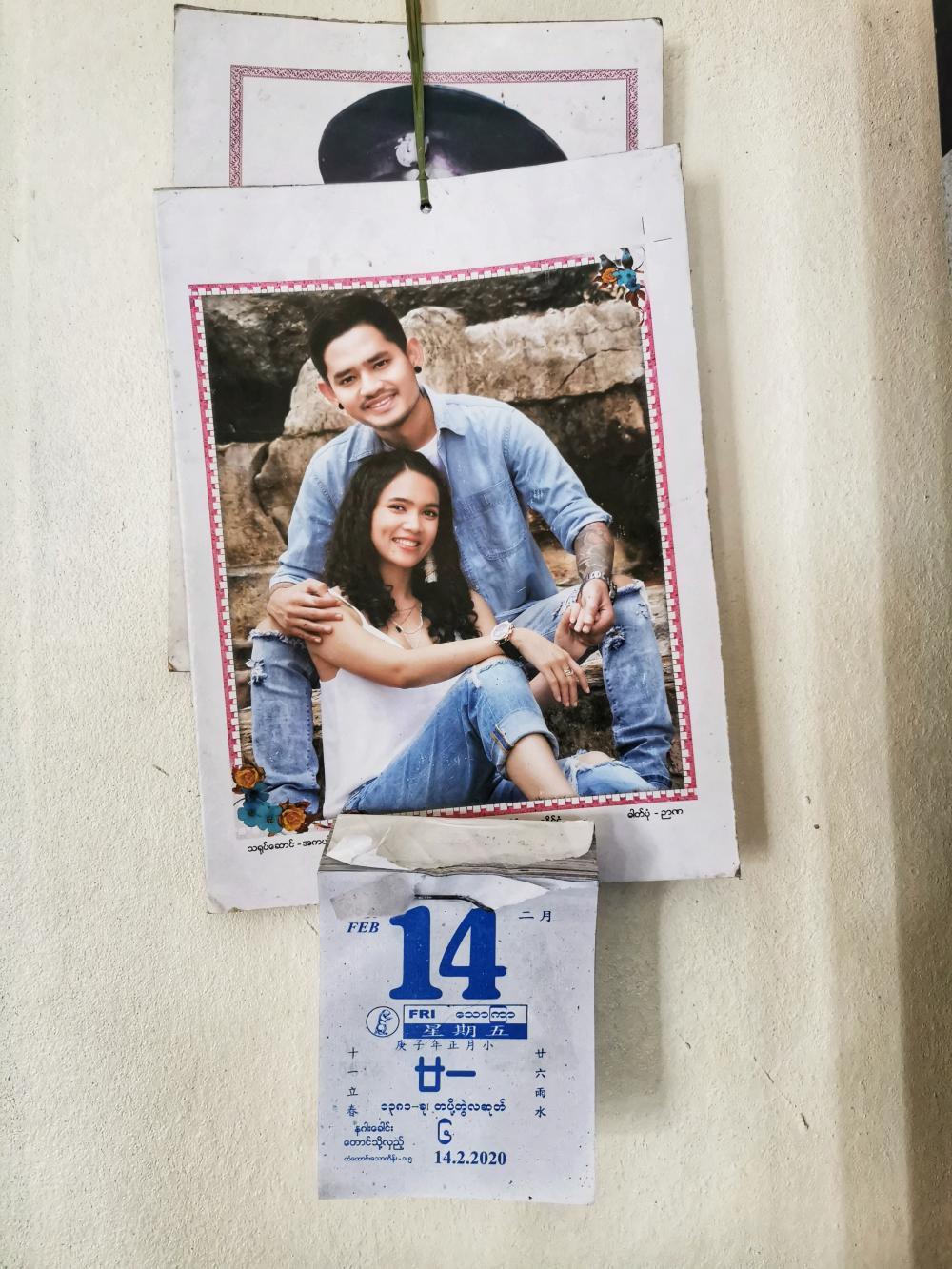 Despite its isolated location, Pila Island not only has a school for Moken children but also a Buddhist temple with a shiny hilltop pagoda that serves as a stark reminder that this is Myanmar. Other signs of culture from the mainland were also present. Changes are inevitable. Some may see them as beneficial and necessary, others, especially outsiders, may disapprove. 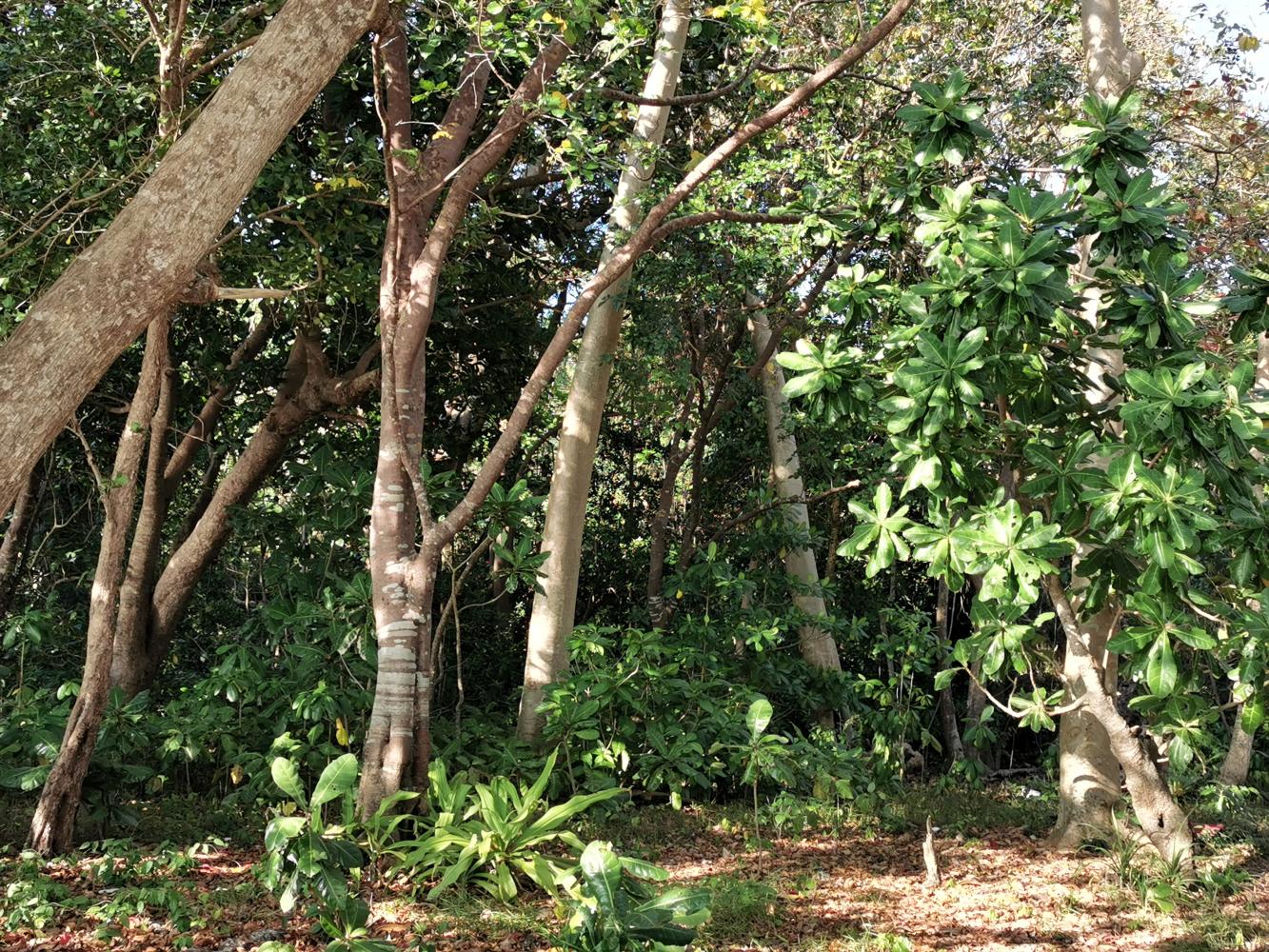 On remote islands, which are available in the hundreds in the Mergui Archipelago, trees and plants flourish undisturbed. In Thailand, beach forests, such as that shown in the horizontal photo, survive only in marine national parks. 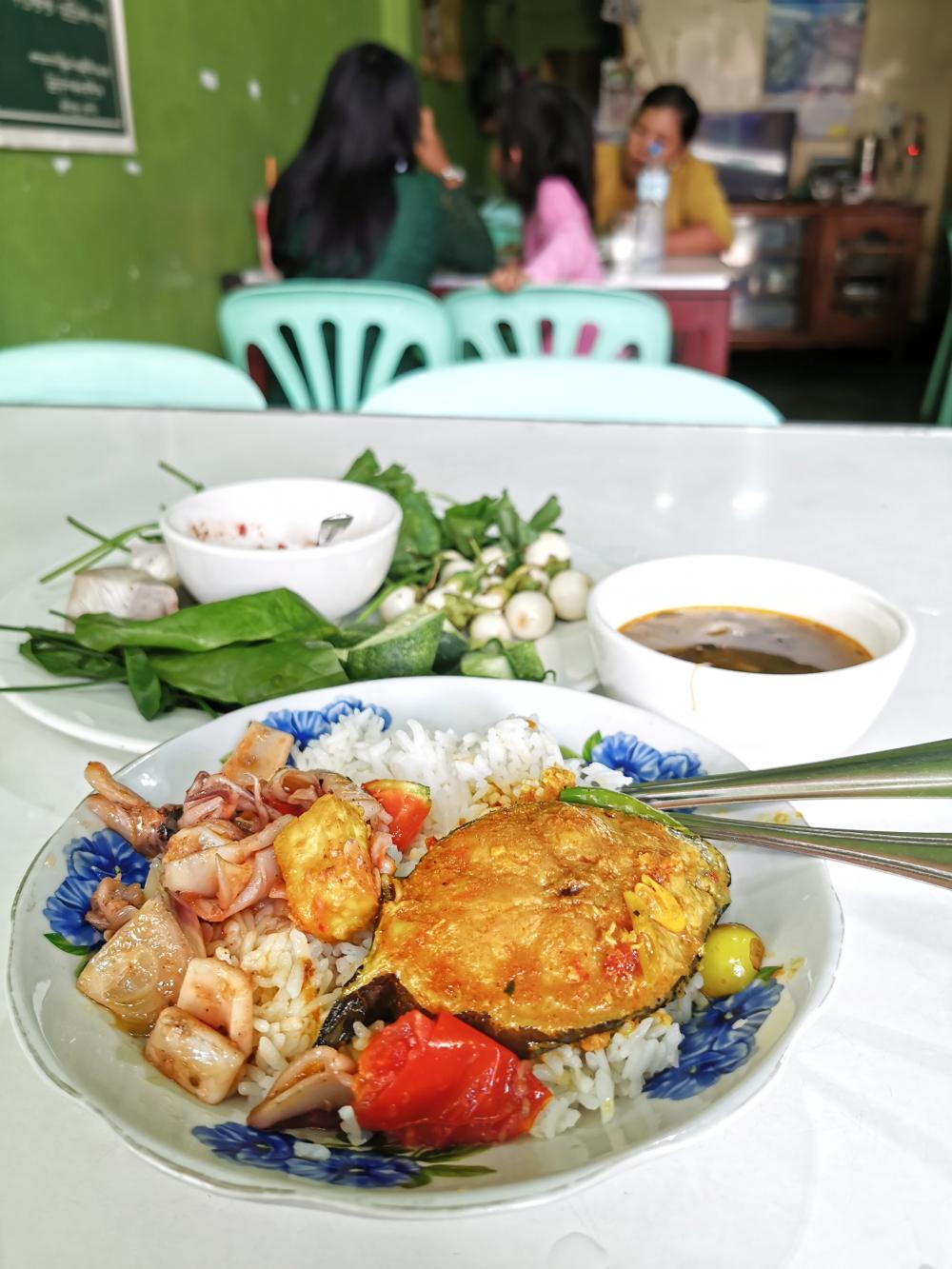 Trying local food is a kind of adventure. In Kawthaung, I dropped by a few shops and stalls. As far as food is concerned, this restaurant where I had rice topped with two dishes (pretty much like the Thai khao gaeng-style shops) was my favourite. The place was located in a lane off the main road marked on Google Maps as Penguin. By the way, my lunch there as seen in the photo plus a litre bottle of water cost me only 30 baht. 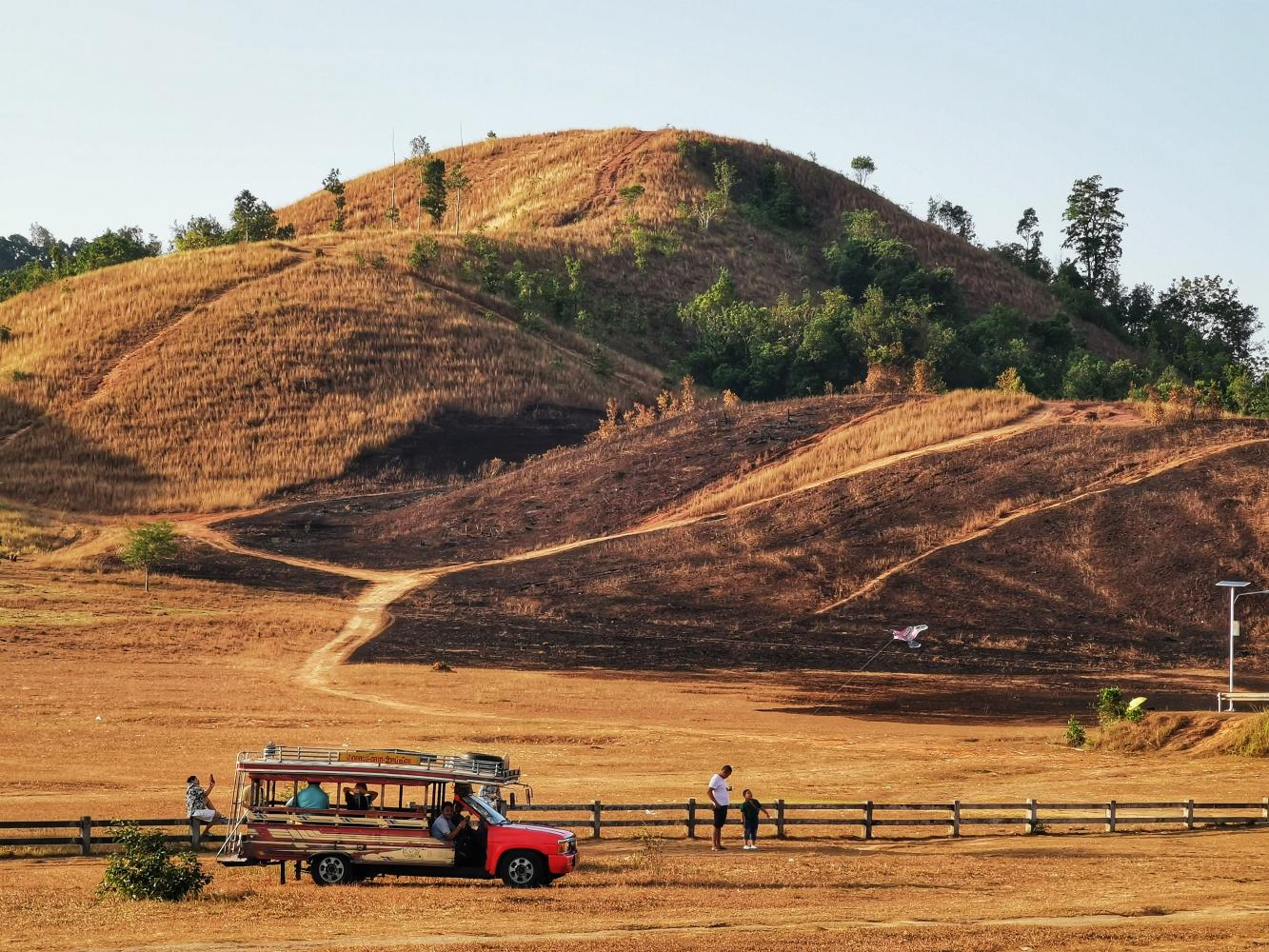 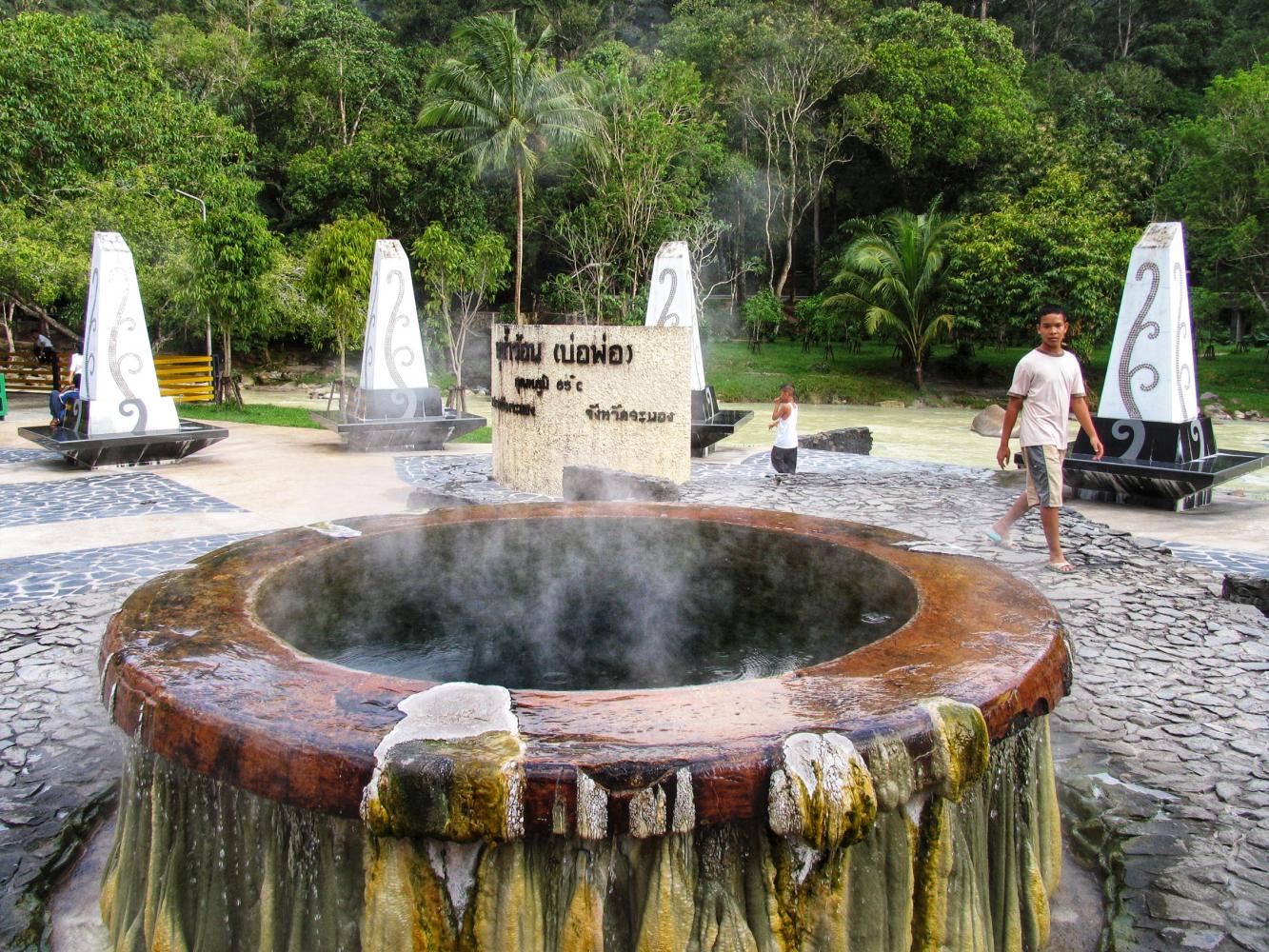 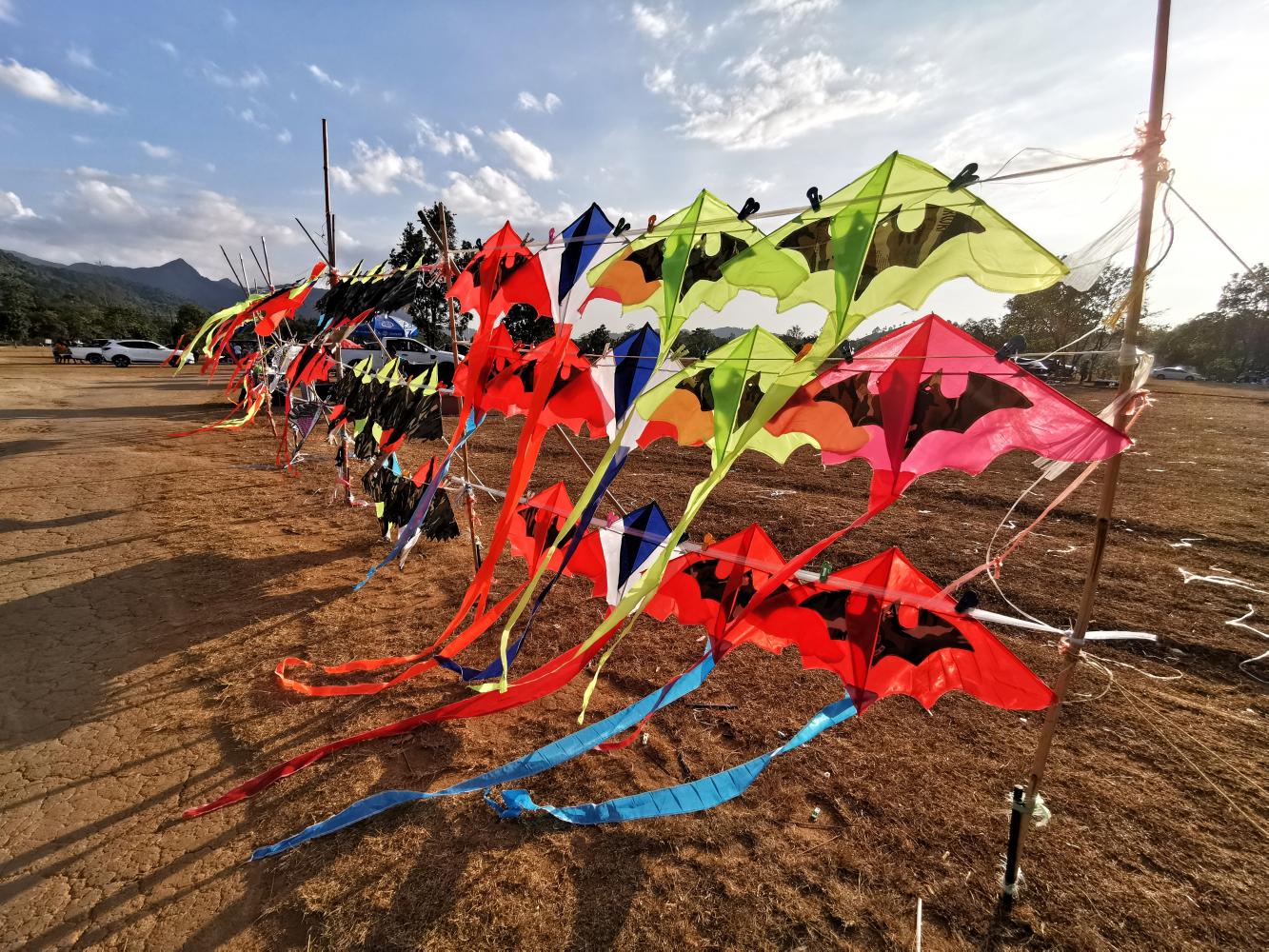 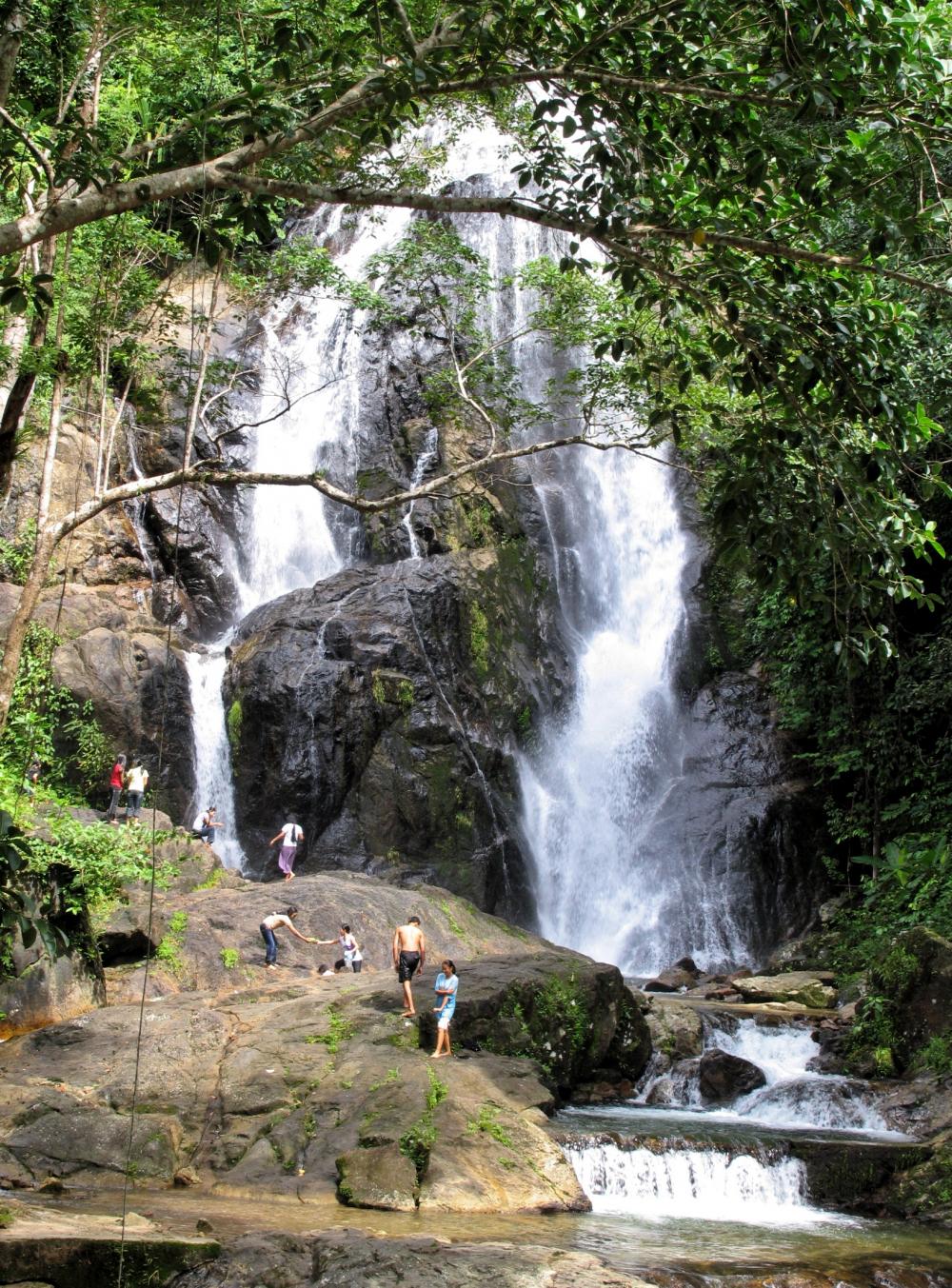 Ranong itself is blessed with various attractions, among the most well-known are the Phu Khao Ya (Grassy Hill), the Raksa Warin Hot Springs and Ngao Waterfall of its namesake national park. The first also serves as a popular picnic spot for townspeople, especially during this season when children can enjoy flying kites. To be honest, this is an activity I haven't seen for years. All of these places are just a short drive from the city. 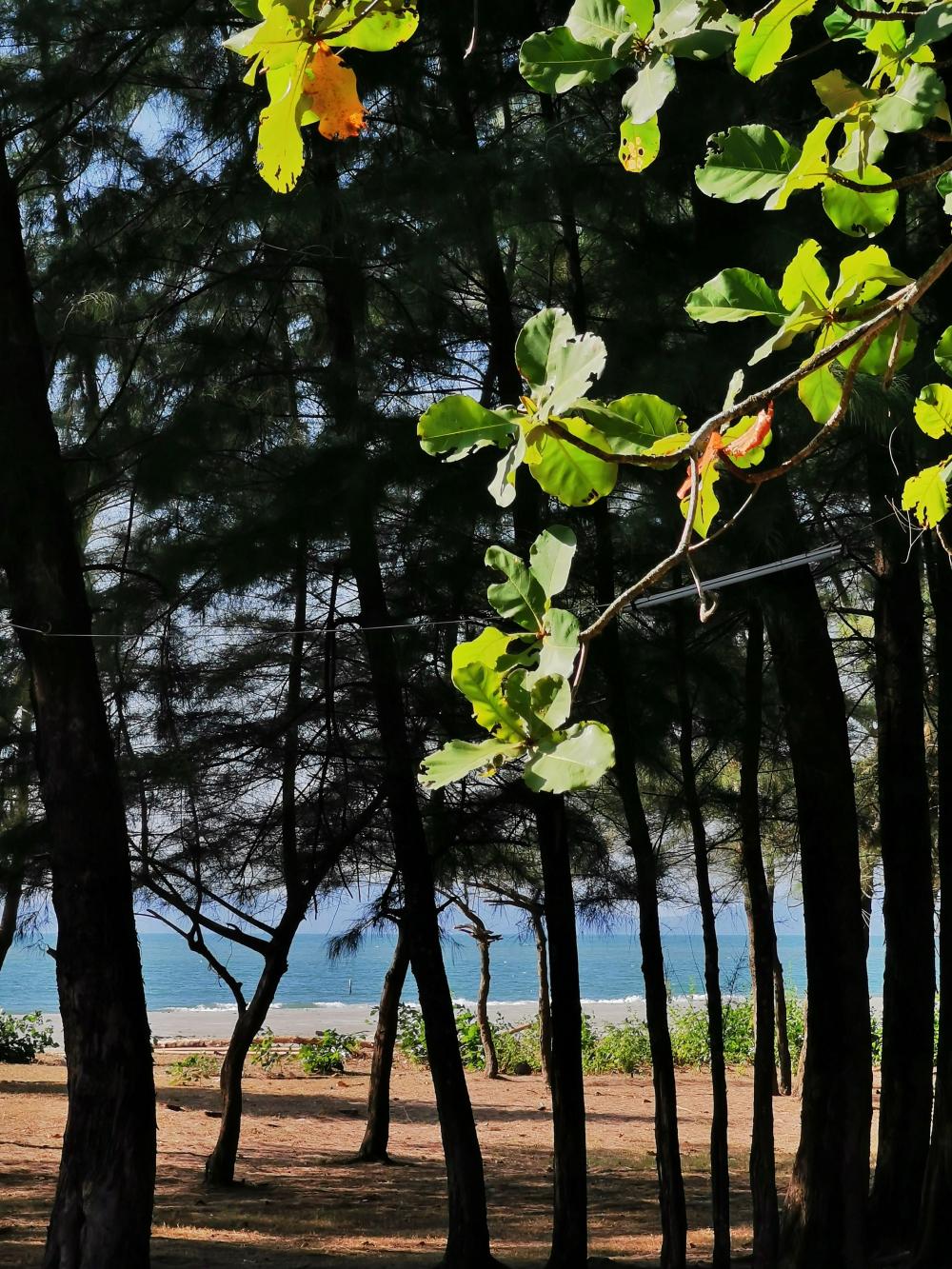 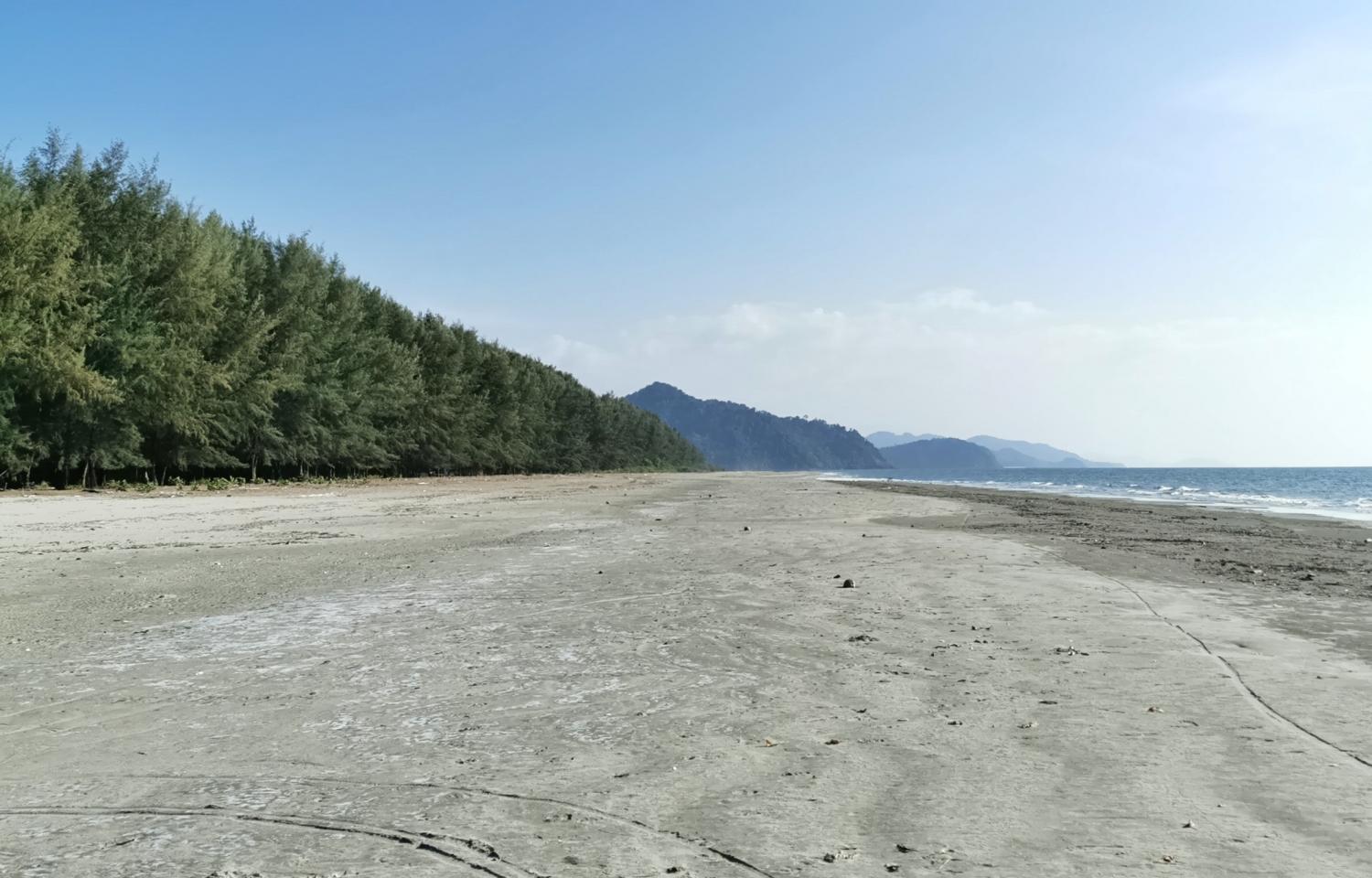 Located in Kapoe district, 47km south of downtown Ranong or 33km south of the airport, Laem Son Marine National Park is one of Ranong's best-kept gems. The park got its name from the casuarina trees (son thalae in Thai) that grow in abundance along the beach. But its real highlights lie offshore. Ko Kam, one of the park's protected islands, was my favourite hideaway. Somehow, I have never been back since the 2004 tsunami. It's high time that I return to this beautiful island with my camping gear. 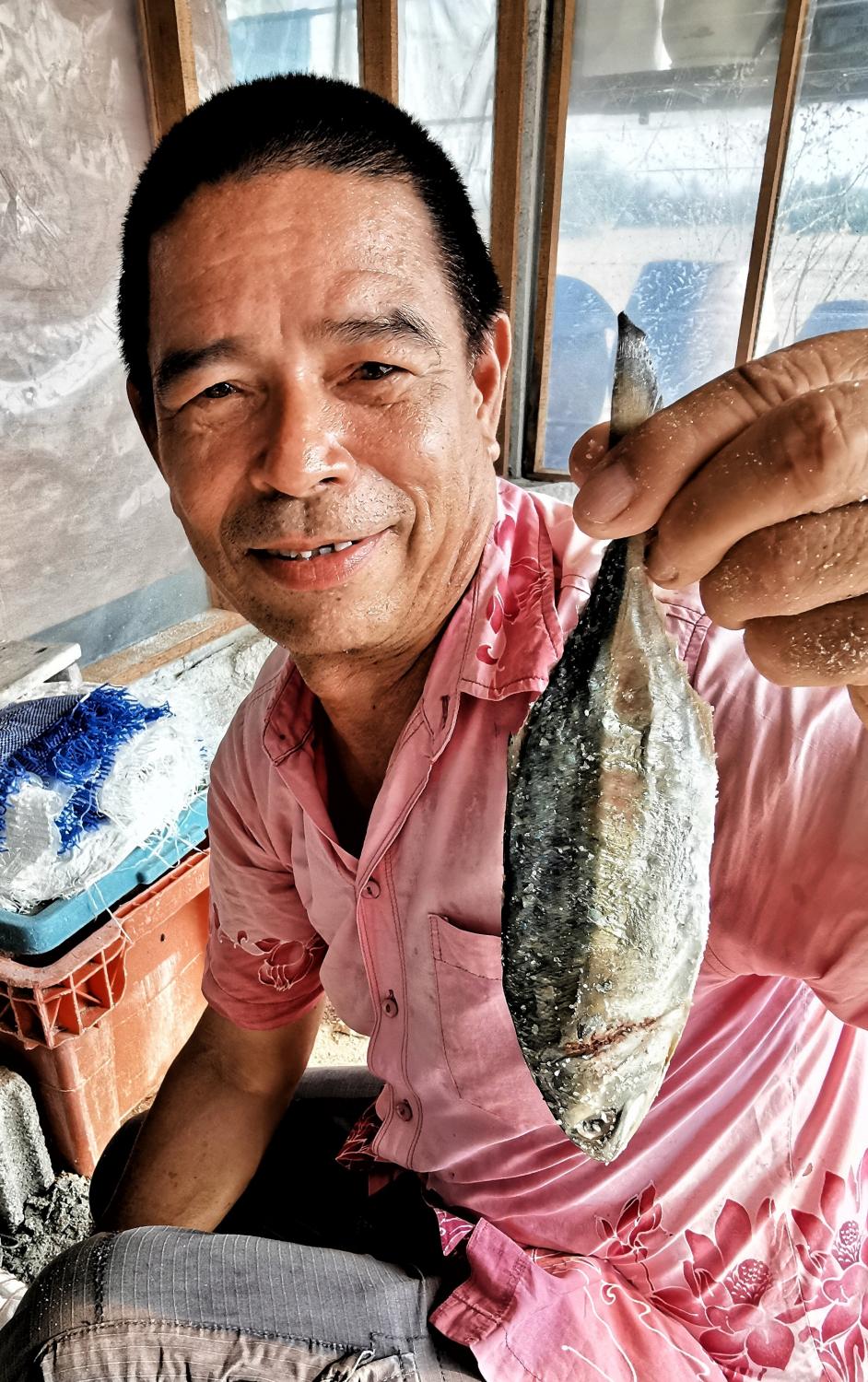 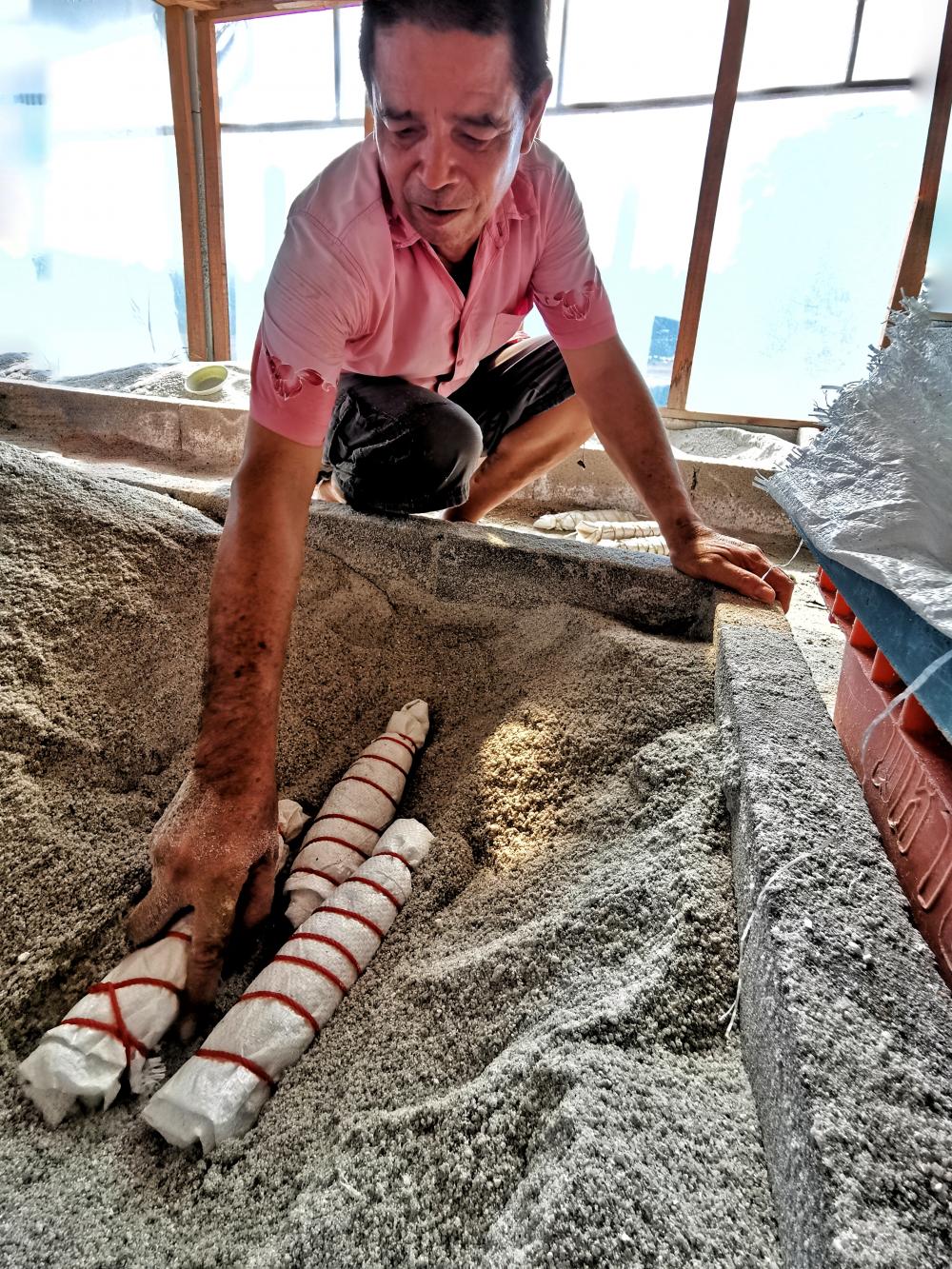 At the north end of Laem Son beach sits Ban Ao Khoei, a seaside village where a former tsunami victim changed his fate and made a fortune by making salted fish from what fishermen had thrown away. Visut Sitthidet would wrap the slightly rotten fish and a handful of salt with sheets cut from plastic sacks and bury each in the sand. Four days later, the fish is dug up. The odour would be gone and the meat, I was told, tasty. The innovative way of food preservation has won him several awards and his salted fish is always sold out. Recently, Visut experimented with fresh fish, like the one shown in the picture. The result, according to him, was not as good as bad fish. Another hot-selling product Visut makes is shrimp paste powder (kapi phong). Visut's home now serves as a learning centre for villagers and schoolchildren from across the country. He also welcomes tourists who wish to learn about how he makes his goodies and all the R&D work involved. To contact him, call 081-788-7096 or search for KapiRanongvisut on Facebook. 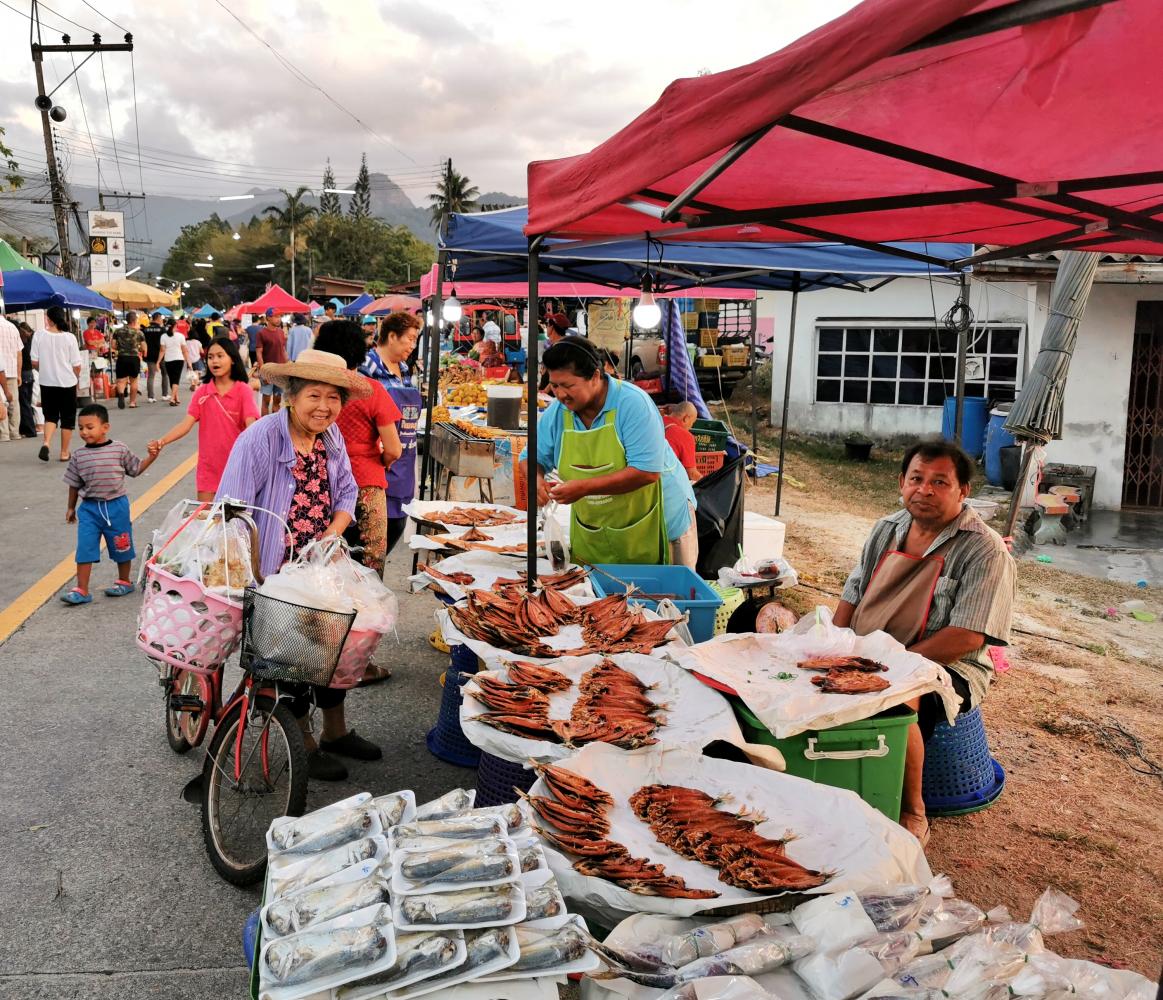 These days many cities in Thailand have walking streets. Ranong is no exception. In Muang district, there are two, one in the downtown area that is held every Saturday and the other in tambon Ngao every Sunday. This photo was taken at the latter, which I visited before my flight back to Bangkok. It was a good decision because the chicken biryani and local snacks I found on the walking street were awesome. 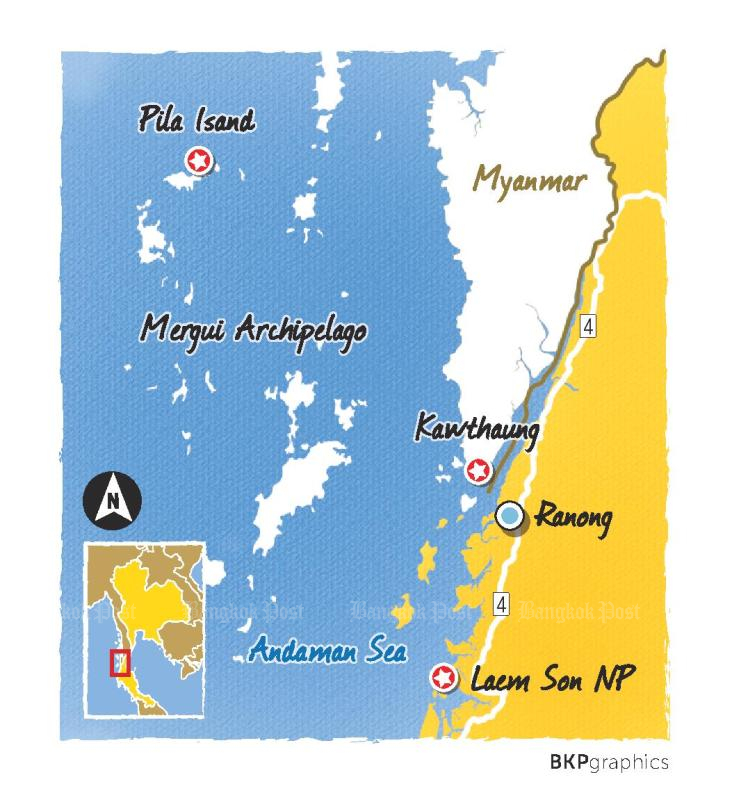