"Status In Statu" is a group exhibition by art practitioners behind the Khon Kaen Manifesto, on display at WTF Gallery until Oct 30. Inaugurated in October 2018, this biannual event takes place in the unorthodox location -- a non-white cube gallery or a museum -- that allows artists to genuinely embed themselves with the oppressed and to present unique stories through the participation of ordinary citizens.

In 2018, Khon Kaen was still under martial law due to the ongoing resistance against the junta by Red Shirts in the province, which was exacerbated when a student activist, Jatupat Boonpattararaksa aka Pai Dao Din was sentenced for two years and six months on a lese majeste charge resulting from his sharing of a BBC report profiling the monarch in 2017. The Khon Kaen Manifesto's objective is to present the sociocultural narrative of Isan through an aesthetics of resistance and participatory art.

This year, the Manifesto will extend to a second venue in Ubon Ratchathani, one of the four major cities of Isan. It is a city redolent of historical resistance events, including Phi Bun Rebellion (1901-1902), Isaan Ministers and the Free Thai Movement (1933–1949), Pak Mun Dam and the Assembly of the Poor (1990-1995), The Red Shirts and the burning of the town hall (2006). Ubon is also a hometown of Wanchalerm Satsaksit, a political exile who was recently abducted in Phnom Penh.

For the first time, the exhibition is curated at WTF Gallery for Bangkokians, who have little or no knowledge or interest in the history of the decades-long struggle between Isan and central power in Bangkok. Thanom Chapakdee, director of the Khon Kaen Manifesto, Ubon Agenda, Nabua Art Summit and Aesthetics of Resistance, says, "At the Khon Kaen Manifesto we deal with the culture of politics and the artists featured focus on the idea of the cultural approach to criticise, offer a satirical parody on the image of politicians and bring back the context of political issues, which are transferred to art. The exhibition consists of seven artworks that hope to raise the ceiling of tolerance and tackle seemingly taboo subjects to see if democracy is at all sustainable in Thai society."

This is also a precursor of what is to be displayed in November and December. The main question being: Can people in this country -- or anywhere -- endure points of view they do not agree with, rather than screaming them down, banning them and reaching for their real or metaphorical guns? 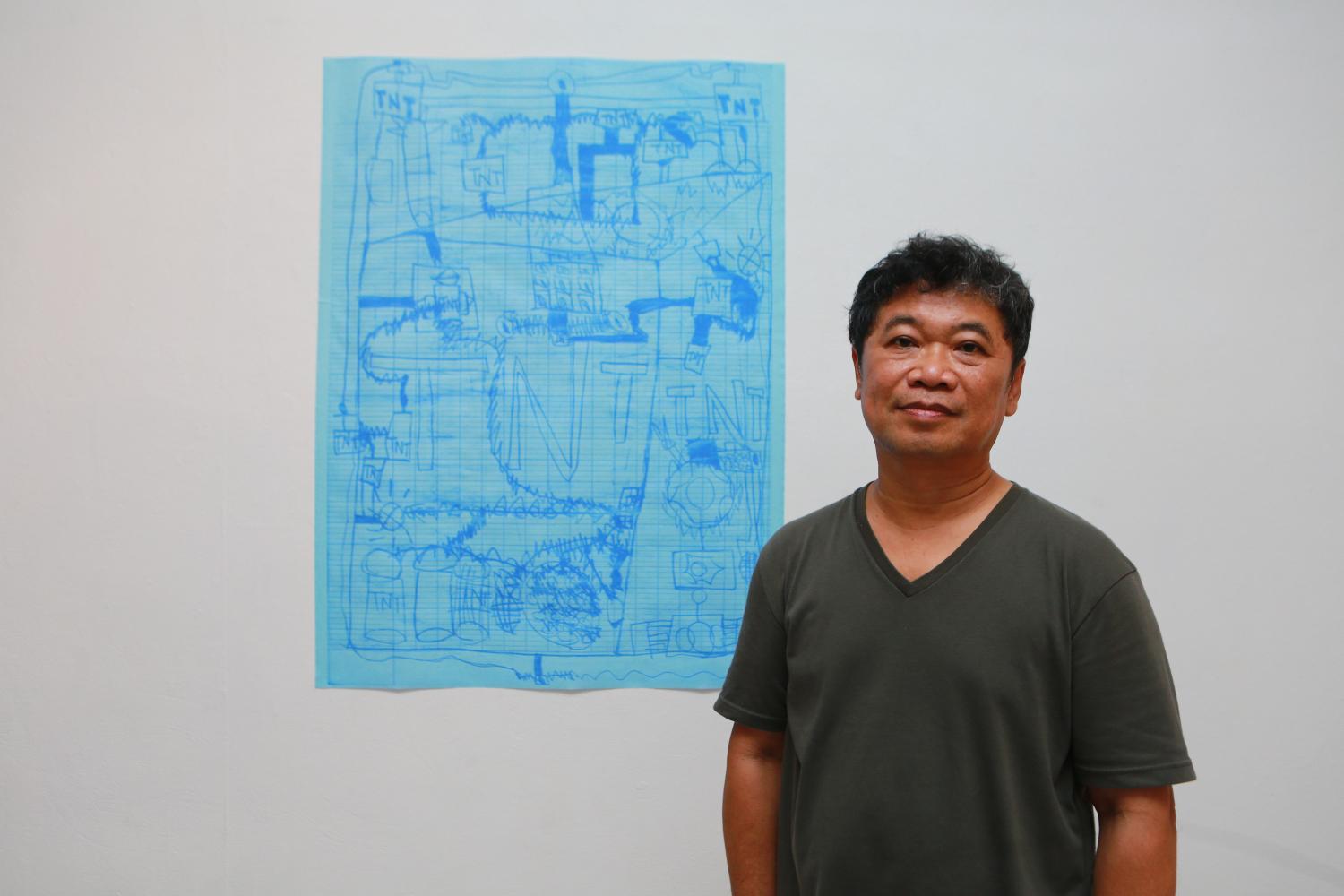 This is an ongoing project because the drawings are my son's, which I started to collect a couple of years ago. The idea behind it is in line with the current political and social climate, which is a young people's movement. The younger generation are raising their voices and are trying to break the mould. This is why it is a blueprint; a work in progress. 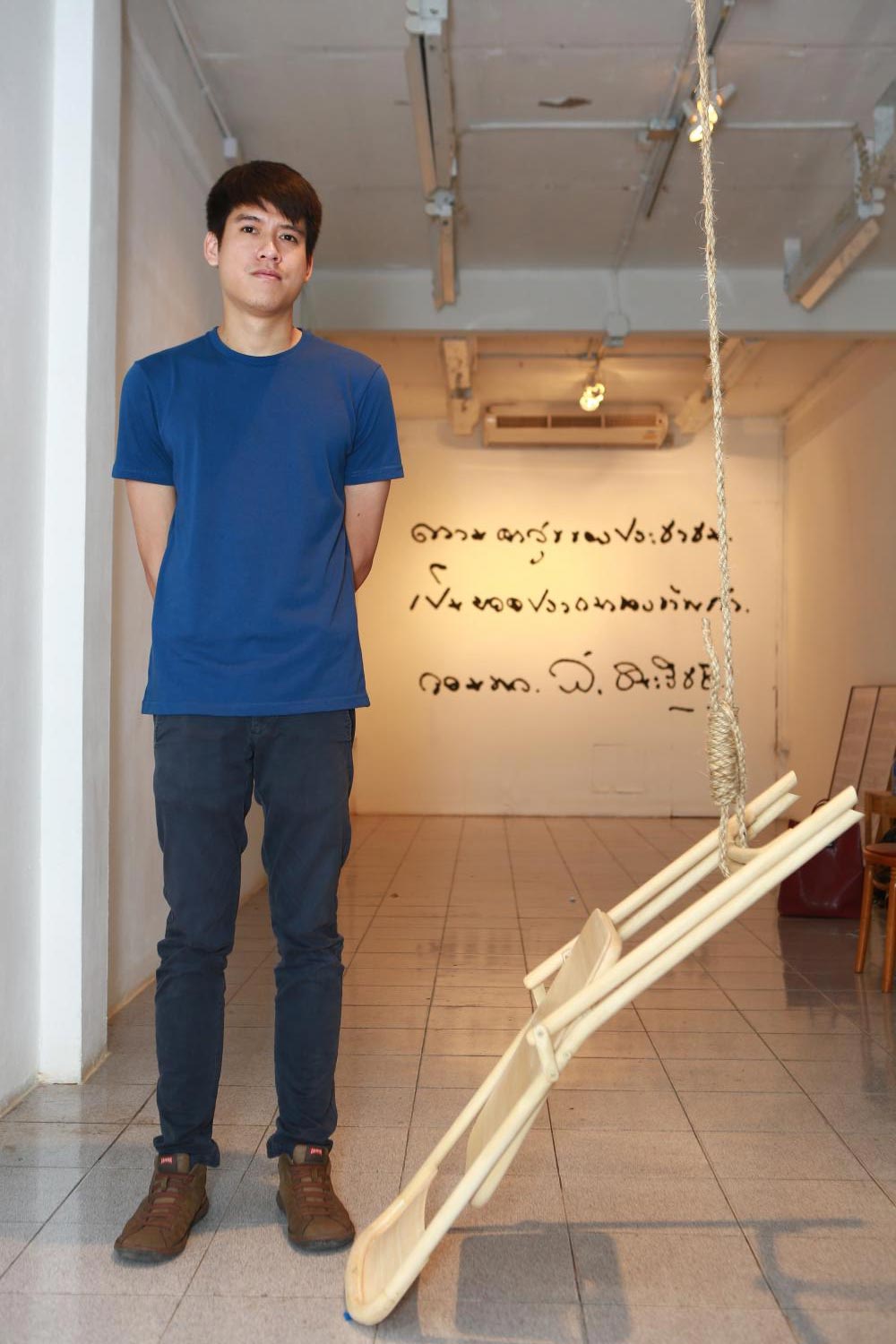 It is a reproduction of the famous photograph of the lifeless body of a student hung from a tree outside Thammasat University in Bangkok on Oct 6, 1976, by Associated Press photographer Neal Ulevich, who won a Pulitzer Prize for it. I made the chair from tamarind wood to depict the tamarind tree the student was hung from. I have displayed this artwork in Khon Kaen and I wanted to show it in Bangkok. I want to shine a light on the history of Oct 6, 1976, which has been deleted from all textbooks. 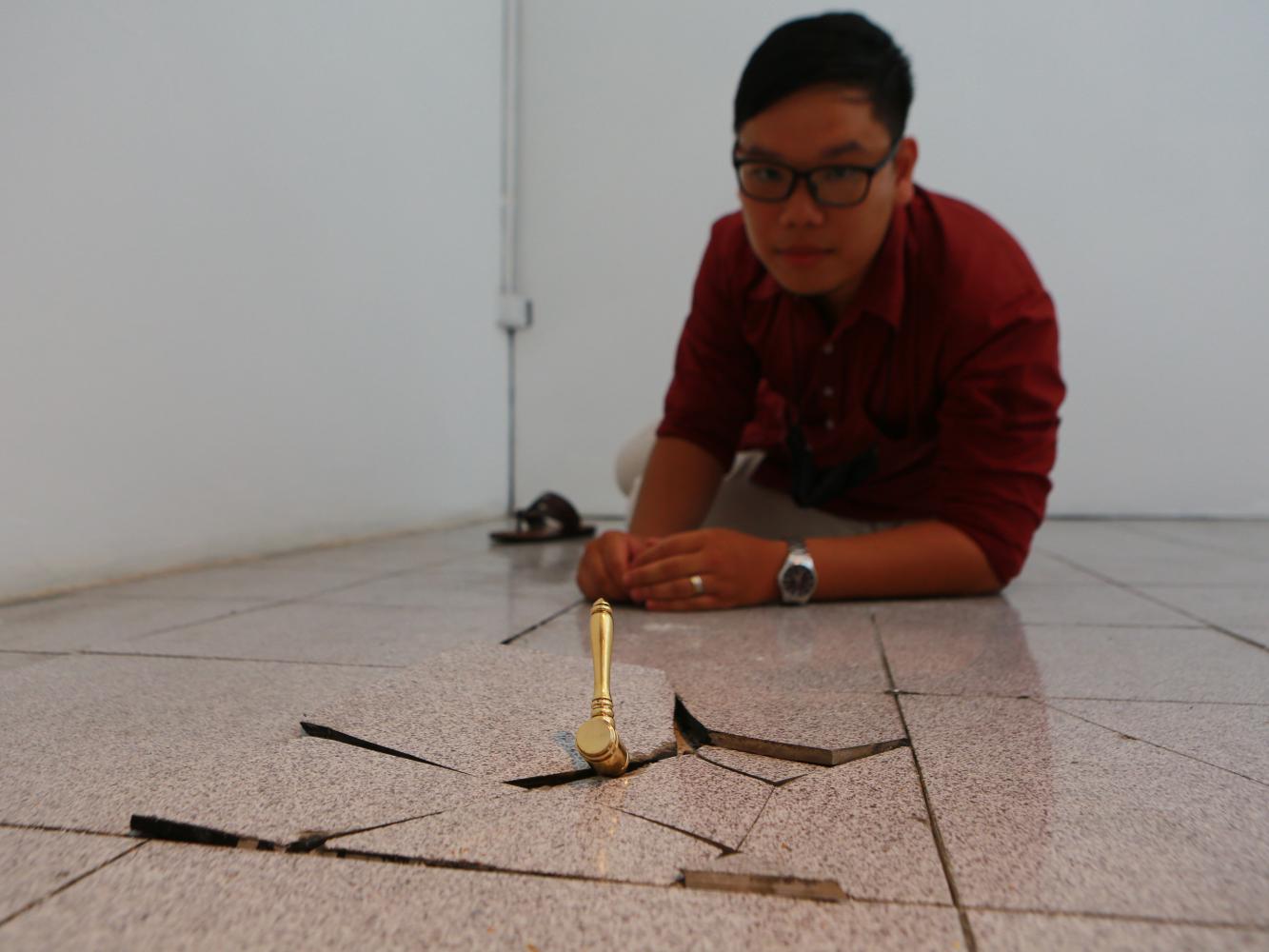 It is about the judicial power, which is one of the three main powers in Thailand. The Thai justice is being exploited and isn't just anymore, this is what the broken tile and the gavel portrays. We are not allowed to express our opinions today and it forces us to keep quiet. This is the depiction of a broken justice system. 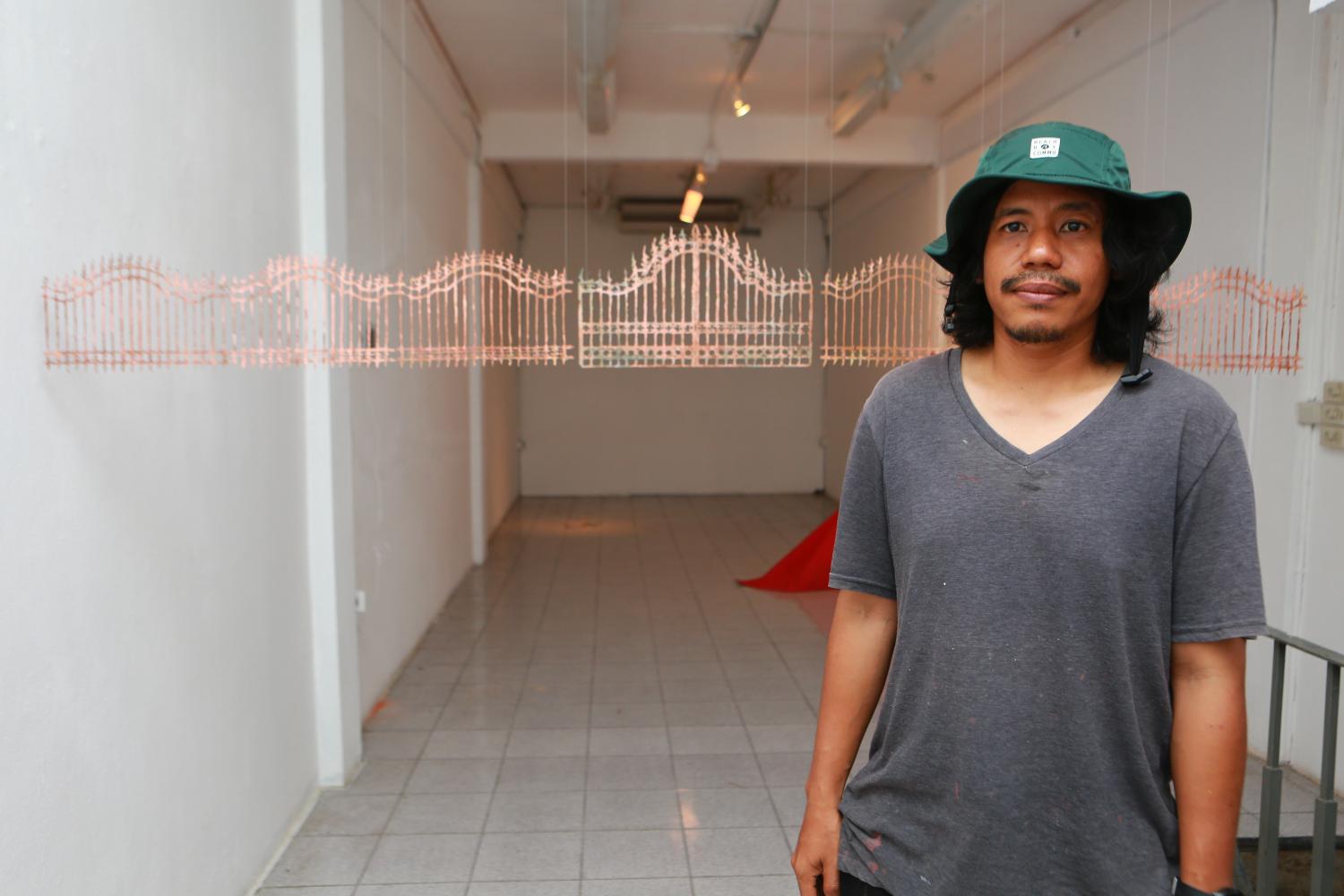 It is a copper plate and I have used acid on it, which took two weeks for the acid to bring it into shape and rust it. It is about waiting for changes. While waiting, we are questioning whether the door or the fence is to protect us or to confine us. And while this question is being answered, the door is rusting due to the long wait for things to change. 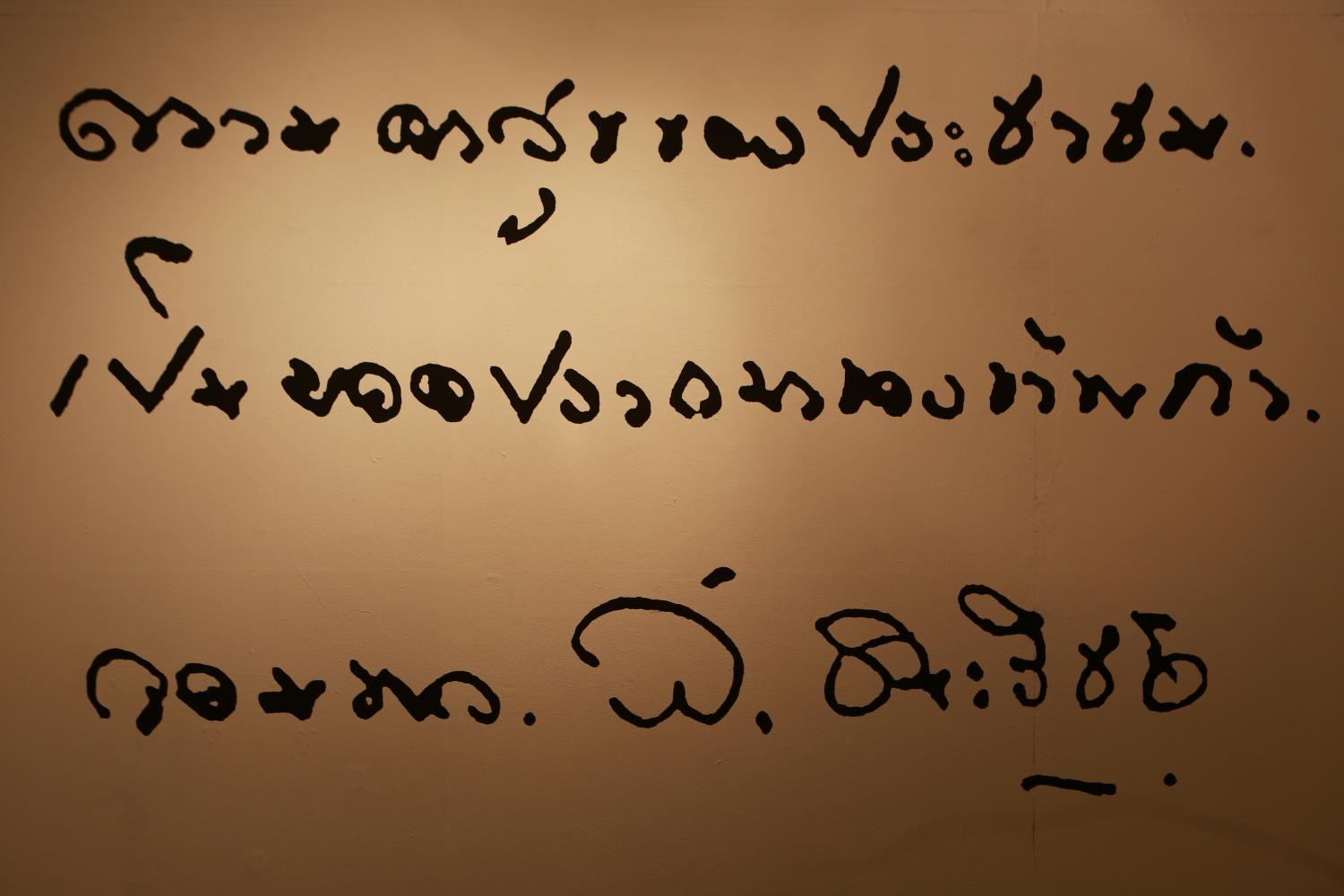 Khon Kaen is a city with contemporary history, a memory with political changes, which remain and return, that was developed especially in the days of Field Marshal Sarit Thanarat, who staged a coup in 1957 and became prime minister. If Field Marshal Sarit did not pass away too soon, Khon Kaen would have developed like Bangkok. The contents of his messages, which say, "The blissfulness of the people is my greatest wish" is like the pledge of a military man who dedicates his life to the blissfulness of the people. They were reproduced in numerous documents since before and after his death, and are as well remembered as the scandal and wealth of his real life. Enlarging his messages is like a wake-up call to memories that come with the protagonist's keynote speech in the novel. 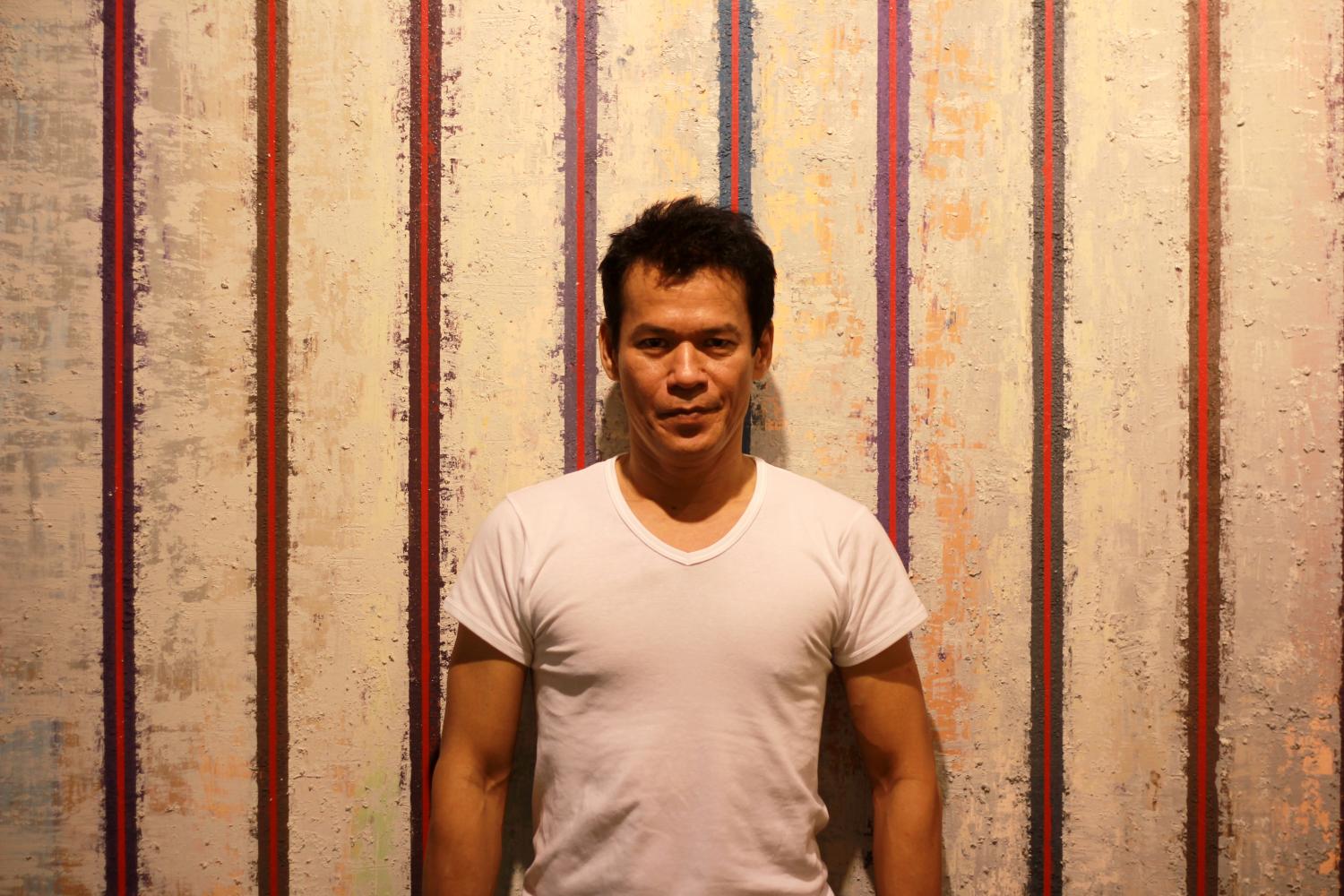 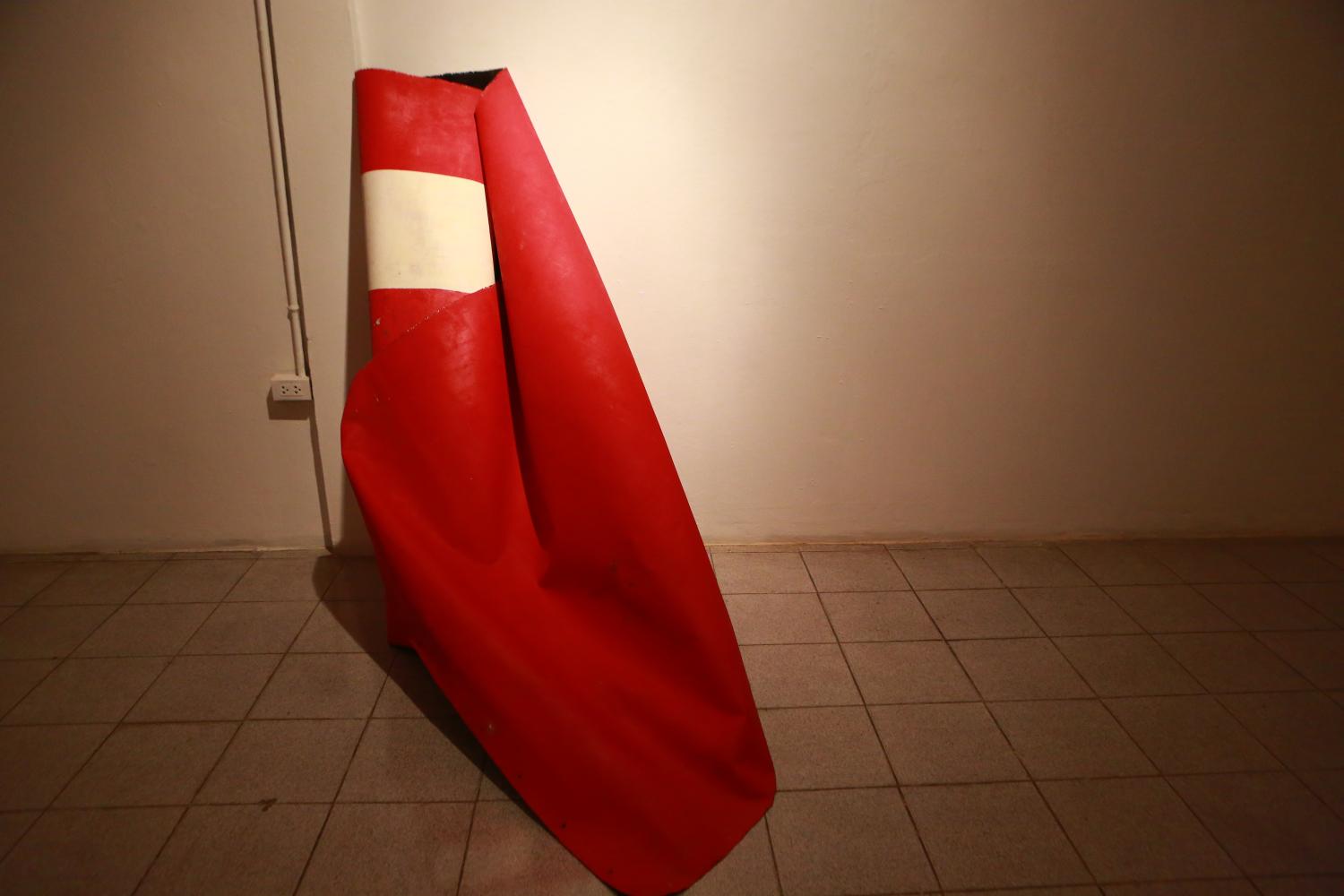 Audiences will have to come and see this artwork with their own eyes. 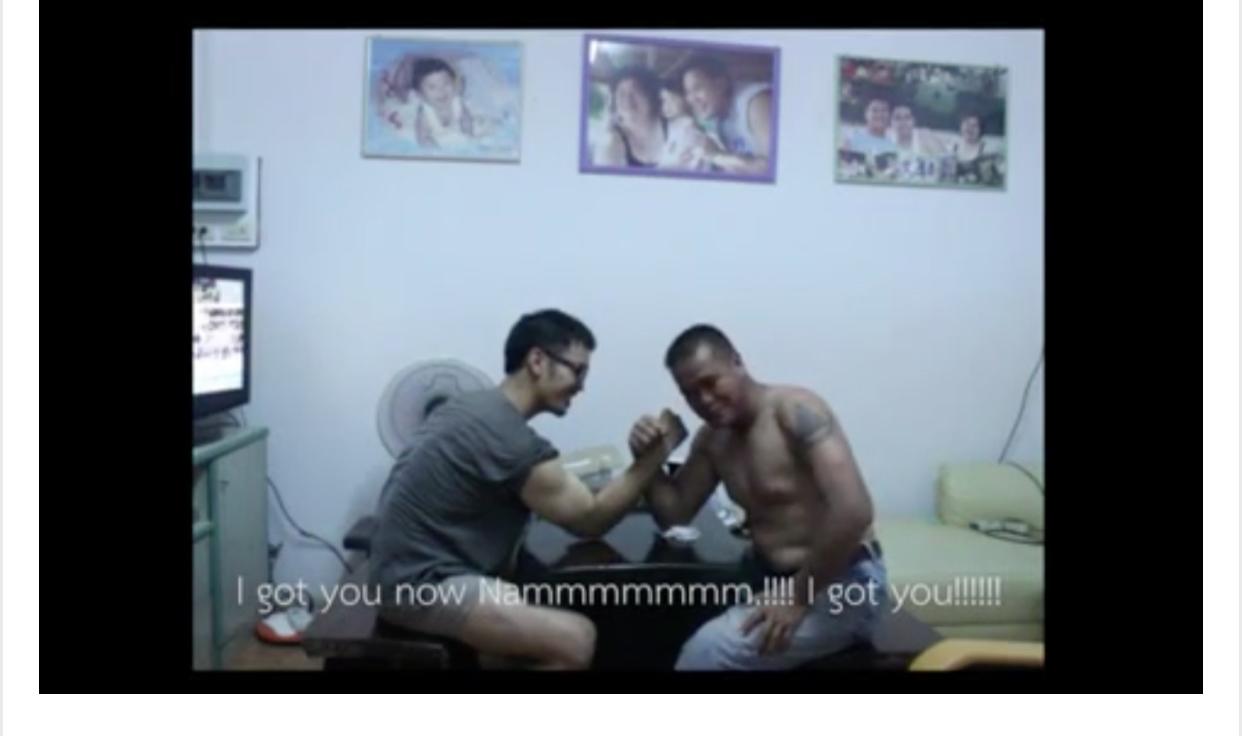 This film is about an interaction between my father and I. It is a manly activity that portrays gender through arm-wrestling, which uses a lot of energy. It is a frequent competition that we do to test our bodies and partly used as a medium for my father to teach me about exercise and living. Other than this, it also encourages family interactions. I would document our activities with a video camera whenever I got home, which is how this film is made.