Thailand has become one of the world's largest garbage dumps after China banned waste imports, including electronics and plastics, from foreign countries in 2017. As a result, waste from many countries that was originally shipped to China is now being redirected to countries in Southeast Asia where strict environmental laws are not enforced.

According to Thailand's Ministry of Natural Resources and Environment, the amount of imported plastic waste skyrocketed dramatically from around 152,000 tonnes in 2018 to 323,000 tonnes in 2019. A 2019 Greenpeace report stated that top exporters of plastic waste to Asean included Australia, China, Japan, Hong Kong and the United States.

"China was the world's garbage dump before. There were thousands of recycling plants in the country but 65% of these plants violated China's recycling regulations and caused a negative impact to the environment. Moreover, plant workers became sick due to hazardous toxic residue," Tara Buakamsri, country director of Greenpeace Thailand said in explaining China's ban.

Only 10% of trash containers that arrive in Thailand are inspected randomly by the Customs Department, which allows illegally imported rubbish such as contaminated waste to enter the country. However, industrial waste enterprises, whose licences to import waste expired on Sept 30, are once again seeking to renew their permits.

To prevent Thailand from becoming a dumping ground for the world's trash, a civil society network of 62 organisations including Greenpeace Thailand as well as Ecological Alert and Recovery Thailand (Earth) is urging the government to refuse licence renewals for waste importers.

The organisation's petition on change.org, which has over 25,000 supporters is calling for a ban on plastic waste imports because it isn't restricted under the Basel Convention, an international treaty aiming to control trans-boundary movements of hazardous waste and disposal. On Jan 1, new Basel amendments will require that the trade of mixed and dirty plastic waste be strictly regulated or prohibited.

While plastic makes our lives more convenient, plastic waste and recycling plants have a severe negative impact on society and the environment. 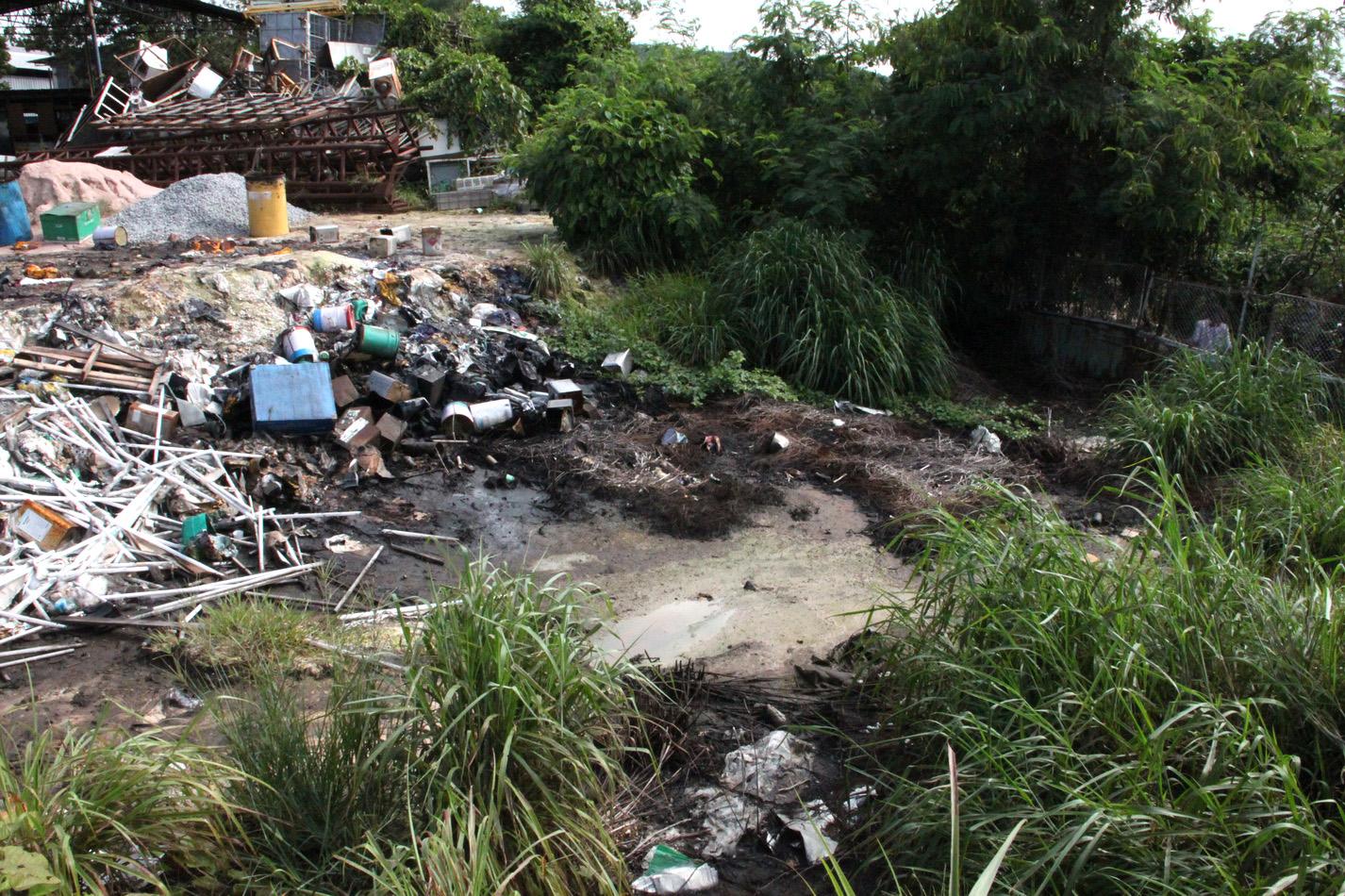 "Many recycling plants were built in provinces around Bangkok; especially in Samut Sakhon. Others are also present in Chachoengsao, Samut Prakan, Phetchaburi and Ratchaburi. Many of these plants are co-investments with Chinese investors because recycling plants in China don't allow plastic waste to be imported, so they have to move to Thailand, Malaysia and the Philippines. Recycling plants have a negative effect on communities because they contribute to air pollution, water pollution and the contamination of soil and water. Since 2018, many villagers have complained and some have even sued the plants. As a result of conflicts, there have been deaths of community leaders as well," said Tara.

"E-waste and contaminated plastic are imported and claimed as materials for recycling but in fact, they don't qualify for processing. After these items arrive in Thailand, we can do nothing with them except to dispose of them. Importing waste is an attempt to dump more trash in Thailand," said Akarapon.

"Some items like medical waste such as used needles shouldn't be imported at all, but 8,000kg of these items entered the country between January and August," he added.

Unlike other countries in Asean such as the Philippines and Malaysia, Thailand's complicated governmental procedure makes it difficult to return illegal waste to origin countries.

"When customs officers find containers of illegally imported waste, they can't immediately return it. Officers have to impound the waste, which becomes the property of the Kingdom. This waste can be exported from the Kingdom after being sold at an auction but this procedure is an inefficient loophole. We have never heard news about Thailand returning contaminated waste while the Philippines, Indonesia and Malaysia have," Akarapon said. 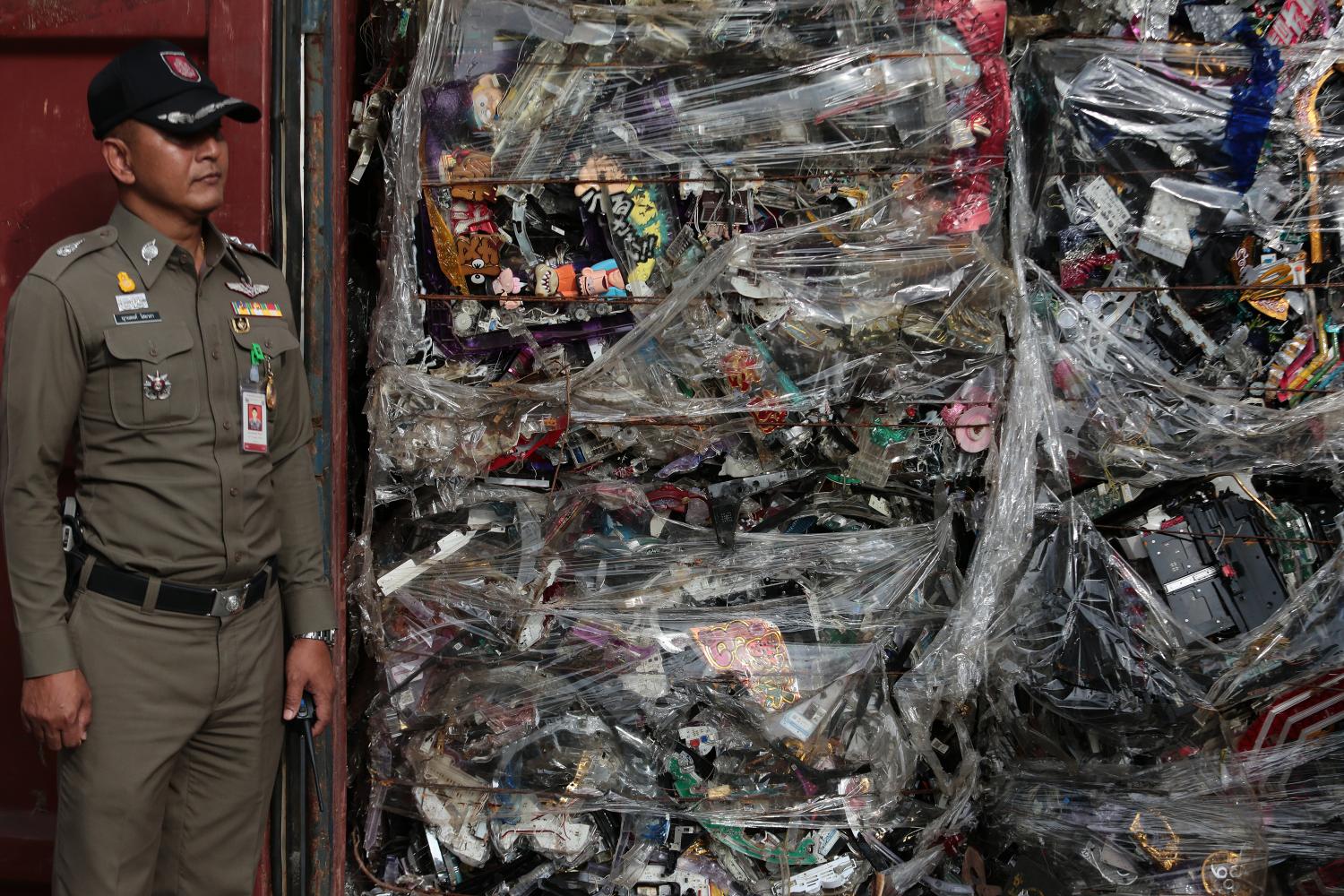 Electronic refuse, or e-waste, is turning up from Hong Kong, Singapore and Japan. The police claim that some of it is imported by companies without the required permits.

Importing waste has a negative effect on the environment as well but Thailand still has 8,000 recycling plants in operation. Is it because recycling waste is in fact good for Thailand's economy?

"The Department of Industrial Works wants to promote investment so that the country can collect tax. However, in terms of employment, a recycling plant is like fishery where most workers are migrant workers. If we look at employment numbers, I think Thailand gains nothing from importing waste, except making it a dumping ground," Tara said.

While businessmen who run recycling plants welcome imported waste, people who make their living as garbage collectors are being forced to end their careers.

"The Saleng and Second Hand Shop Association, which has 1.5 million tricycle garbage collectors and more than 30,000 second-hand shops, said their members have had to quit their jobs.

In 2018, plastic bottles cost 13 baht per kilogramme but this year, the price decreased to 8 baht per kilogramme, which means that garbage collectors earn a lot less now than before. Piles of plastic waste and packages are being left in second-hand shops because they can no longer be sold," Tara said.

On Oct 6, the Ministry of Natural Resources and Environment, Varawut Silpa-archa announced that the national committee on imported plastic and electronic waste will not renew or extend licences for waste importers, which was seen as a major victory for environmental activists and the change.org petition. Tara responded to the news by saying that it was simply the first step.

Both Tara and Akarapon cautioned that the government has offered no implementation plans when it comes to banning future waste imports. As a result, the pair claim that they will continue to push the government to fully prohibit the hazardous waste trade.

"I doubt this statement will be effective since there is no specific description about the plastic waste that will be banned for import into the country. I also wonder why industrial facilities agreed with this statement since they previously insisted on their demands about importing waste being met. I can't see any transparency. Looking back at the road map of the national committee on imported plastic and electronic waste, quotas for plastic waste two years ago stood at around 110,000 tonnes. However, in reality, some 400,000 tonnes of plastic waste was imported with no punishment for violators at all," Akarapon said.

"I don't feel comfortable with this good news because it is just words. There is no measure, no enforcement and no punishment. People have to keep an eye on the statistics of importing waste next month. After banning plastic waste, we have to develop a recycling system that is cleaner and more effective, so prices of local recyclable items can increase. If we don't develop recyclable items to feed our plants, how can our recycling system continue?," Akarapon said.