Ahead of the cool season, Life speaks to Ekbordin Winijkul, a lecturer at the Asian Institute of Technology of the dangers of PM2.5 and its potential to exacerbate the Covid-19 situation

In the dry winter months, it is not just the fear of Covid-19 but also the menacing presence of particulate matter 2.5 (PM2.5) -- hazardous fine-dust particles that measure 2.5 micrometres or less in diameter and affect the human respiratory system -- that the public has to contend with.

Earlier this month, Bangkok saw the return of dangerous smog and emerging data painted a grim scenario in which PM2.5 levels had reached an unsafe level in at least 14 areas -- the worst-hit being Phasi Charoen and Bang Phlat districts -- during the day, according to the Pollution Control Department.

Such a conclusion was reached after data was collected from 45 stations across Bangkok. Experts noted that PM2.5 had reached unsafe levels and ranged between 51 microgrammes per cubic metre (μg/m³) to 64 μg/m³ over a period of 24 hours. The government-decreed safe threshold is 50 μg/m³.

This year, the government has implemented an initiative in which large lorries will be banned from entering Bangkok between 6am to 9am starting tomorrow until February of next year. However, whether this will help reduce the levels of PM2.5 in the air remains to be seen.

Experts describe PM2.5 as both toxic and carcinogenic since these particles contain hazardous components which are emitted as a result of fossil fuel combustion and biomass. Classified as primary particles, PM2.5 is so tiny that it can lodge itself inside the human lungs and cause breathing problems. Besides human activity, meteorological factors such as the dry and wet season also contribute to the severity of PM2.5 in certain areas. With this looming health hazard along with Covid-19, people are not only facing a double health whammy but also having to deal with an ailing economy and tourism sector. Last but not least, the environment is also being impacted by such threats.

Ekbordin Winijkul, a lecturer at the Asian Institute of Technology's Department of Environmental Engineering and Management, said that in terms of health, PM2.5 can affect several organ systems, including the respiratory (ie; aggravation of asthma leading to an increase in hospital admissions) and mortality from cardiovascular and respiratory diseases as well as lung cancer.

"PM2.5 includes inhalable particles that are small enough to penetrate our lungs through the respiratory system. The health effects of PM2.5 have been well-documented and can be separated into both short [hours, days] and long term [months, years]. However, combustion-related PM2.5 [emitted by vehicles or industry] tends to be more hazardous than other sources. Many components of PM2.5 are responsible for negative health effects such as polycyclic aromatic hydrocarbons (PAHs), a known carcinogen which is toxic to cells as well as metals and inorganic salts.

"For instance, exhaust from diesel engines is classified by the International Agency for Research on Cancer as carcinogenic to humans. Thus, people in the city who are exposed to more exhaust have a higher chance of developing a respiratory-related disease. Every year between the months of November and February, more people feel the effect of PM2.5 since it aggravates existing chronic respiratory disease."

Besides people, the economy is the next victim of PM2.5, according to Ekbordin who said that pollution reduces labour productivity while increasing health expenditure. There is also the possibility of a reduction in crop yields as farmers also tackle health-related issues.

"These impacts are directly related to the economy of a city/country. For example, with high levels of PM2.5 concentration in the city, more people will have respiratory problems and thus suffer from poor health. As a result, work efficiency declines and mounting health-related cases increase the burden on the healthcare system. In such an environment, fewer investors will find it lucrative to set up their business."

Furthermore, PM2.5 has not spared the tourism industry either, said the environment expert.

"No doubt, good air quality is often high on the list of priorities of tourists, however, we have seen that PM2.5 is often most prevalent in tourist areas. 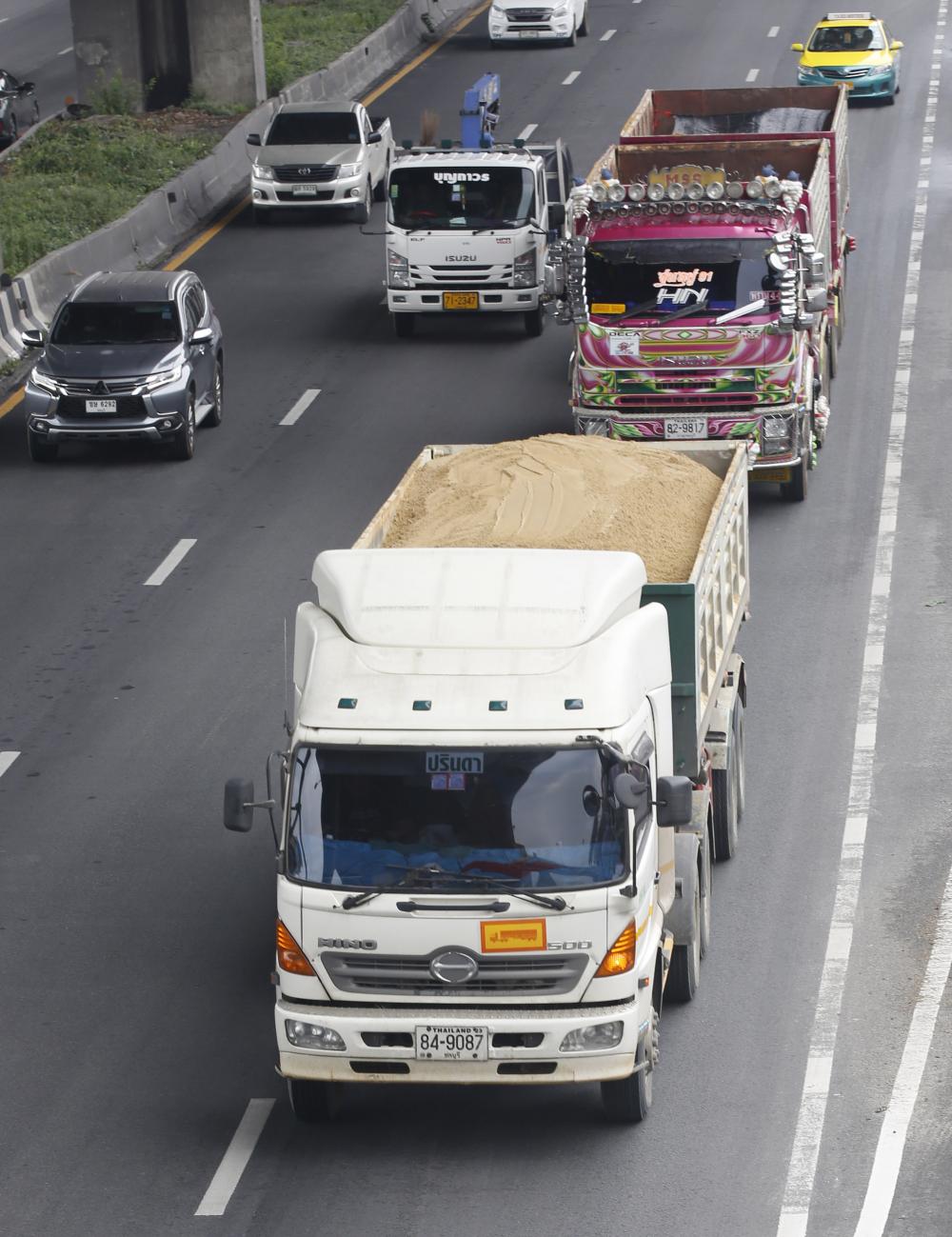 Starting tomorrow, large lorries will be banned from entering Bangkok from 6am to 9am. This measure, which will take effect until February, is a state protocol to prevent the PM2.5 crisis from getting worse.

Furthermore, Ekbordin said PM2.5 can reduce visibility and adversely interfere with the climate and ecosystems. It is common knowledge nowadays that visibility is often very limited on days with bad air quality, which explains its impact on nature, he added.

"PM2.5 and other oxidants that are suspended in the air scatter and absorb light and therefore reduce visibility and turn the sky foggy. Also, when PM2.5 deposits itself on the surface of leaves, it reduces their exposure to the sun, which is required for photosynthesis. Moreover, some pollutants can deposit and accumulate in the environment and cause acid deposition, which can also affect the ecosystem."

Ekbordin said vulnerable groups that should particularly take precautions during high levels of PM2.5 include individuals with heart or lung disease, children, and senior citizens. Research further indicates that pregnant women, infants, and people with certain health conditions, such as obesity or diabetes, may also be more susceptible to PM-related effects.

Furthermore, he said it was worth consulting one's medical doctor when the need arises and to shift to a new location such as the indoors for better air quality.

"When PM2.5 concentration is high for a prolonged period of time, it can build up even indoors even though it is not visible to the human eye. Also, if you belong to a sensitive group, don't wait until the pollution index reaches the 'unhealthy' level to start reducing your exposure to PM2.5. In fact, the air quality is already unhealthy for you when particle pollution levels reach the 'moderate' level. Therefore, you will need to take steps to reduce your exposure earlier and if needed more often."

On whether or not PM2.5 can exacerbate the presence of Covid-19 in the country since both target the lungs, Ekbordin said based on the research available, PM2.5 could very well do so.

It was found that an increase of only one long-term exposure event (averaged from the year 2000 to 2016) to PM2.5 is associated with an 8% increase in the Covid-19 death rate in the US.

"PM2.5 can damage the human's body respiratory defence mechanism and weaken the body to the point that the virus can attack easily. Also, exposure to PM2.5 weakens the immune system, making the human body less effective in fighting against the virus.

"Populations exposed to a high concentration of PM2.5 are more at risk of developing chronic respiratory diseases which are favourable to virus infection. Even short-term PM2.5 exposure can increase susceptibility to infections because pollution damages human airways, potentially facilitating virus infection." When asked whether Covid-19 and PM2.5 can intensify during cooler weather, Ekbordin remarked that it is possible.

"The PM2.5 situation will get worse due to bad meteorological conditions that suppress pollutant dispersion during winter. This may contribute to more virus infections.

"Moreover, a recent study conducted this year by researcher Huang et al used Covid-19 case data from 185 countries between January and May found that 60% of confirmed Covid-19 cases were found in places where the air temperature ranged between 5C to 15C, with a peak at 11C. Fewer confirmed cases were detected in extremely cold climates [lower than 0C] or hot climates [greater than 30 C]. This means that as the weather cools down in the country, there is a possibility that there may be an increase in the spread of Covid-19."

Stay indoors in an area with filtered air. Particle pollution can get indoors so use air cleaners that remove particles such as high-efficiency mechanical filters and electronic air cleaners like electrostatic precipitators. Avoid using an air cleaner that works by generating ozone which will increase the pollution in your home.

Avoid activities that make you breathe faster or more deeply.

If you cannot buy filters for your entire home, create a clean room for sleeping. If the room has windows, keep them closed and run an indoor air cleaner.

Take additional steps to keep pollution in your home low. Air cleaners alone may not be enough.

Avoid using anything that burns, such as wood fireplaces, gas logs, and even candles or incense.

Keep the room clean — but don't vacuum unless your vacuum has a HEPA filter. Wet mopping can also help reduce dust.

Disposable respirators known as N-95 or P-100 respirators will also help and should be worn correctly when you have to be outdoors for a period of time.

AQI uses colour codes to represent the quality of air. In Thailand, the index colours are separated into five colours which are calculated from different levels of PM2.5, PM10, Ozone, CO, NO2, and SO2 at the air quality monitoring stations.

The AQI will represent the index of the most polluted pollutant from that particular location.

An AQI of 100 or below refers to the concentration of ambient air quality standard level while an AQI of more than 100 refers to "Unhealthy" air quality.

An AQI over 200 (Red) refers to "Very Unhealthy" air quality.