Finding inspiration around us

Many aesthetic artworks begin with a simple line but drawings are often something beyond just a line. At the art exhibition titled "The End Is Now, Now Is Here: The Exploration Of Drawing", 25 Thai young artists explore and interpret techniques of their own "drawings" in different ways. 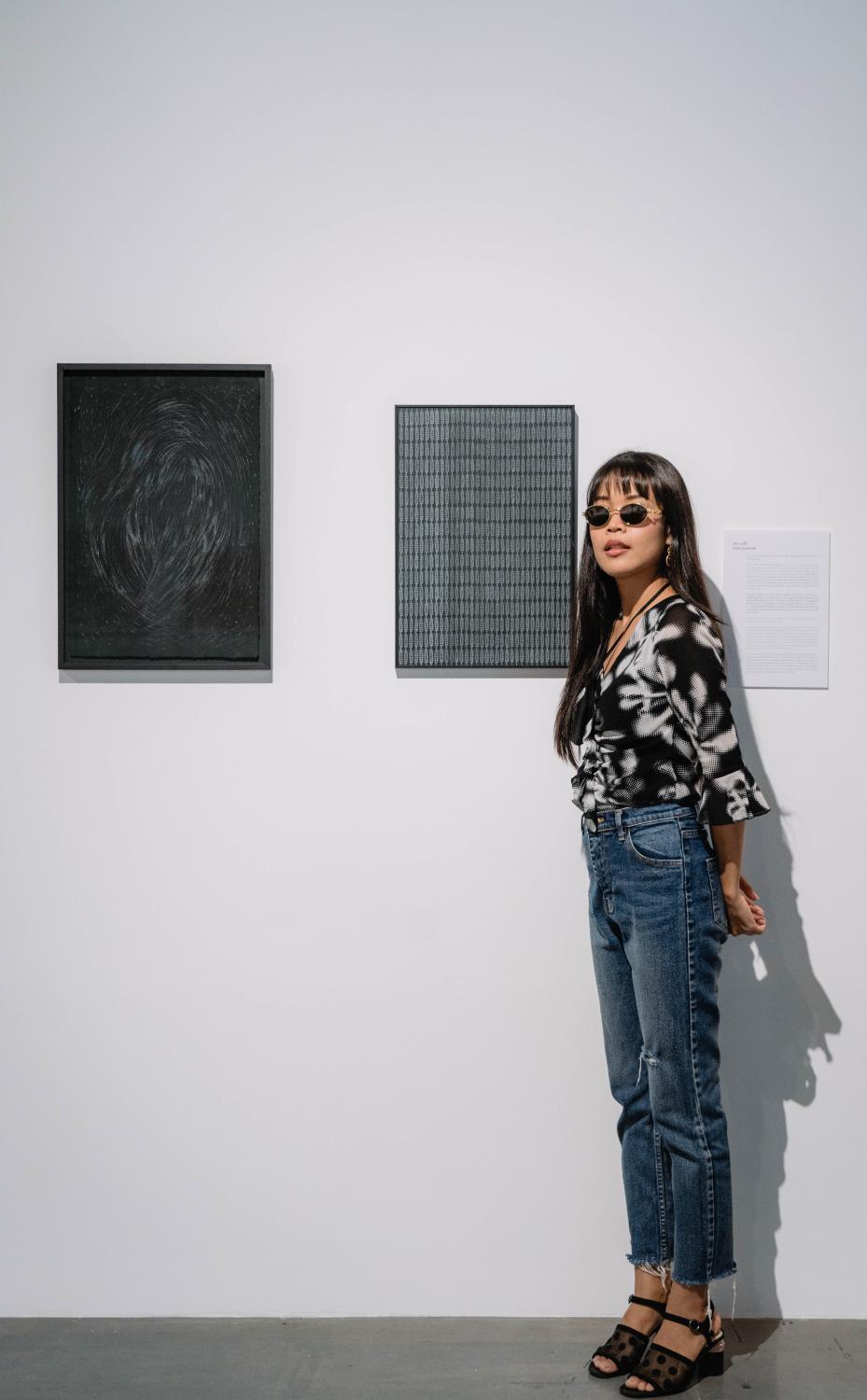 Three participating artists from the exhibition -- Alisa Chunchue, Kitikun Mankit and Surajate Tongchua -- who now run SAC Gallery agree that drawing as an art form is not limited to only portraits.

"Drawings can be something beyond a line. All forms of art portray things that artists want to communicate and depending on the artist's purpose, artwork affects people and society because it sparks thoughts within them," said Kitikun.

"Many people think drawing means to sketch something and make it look like a mannequin or a still life model. However, a contemporary artist may have many reasons behind a drawing, such as repetition, to make viewers see a story through the lines," Alisa said.

"The title of the exhibition refers to drawings but my artwork isn't just drawings. Hence, drawing for me means thinking about the structure and material selection which are congruent with visual elements," Surajate commented.

The 25 artists at "The End Is Now, Now Is Here: The Exploration Of Drawing" use various media and techniques to present their work, including drawing, painting, sculpture, photo, installation and mixed media. Life spoke with three of them about their ideas.

With a bachelor's degree in sculpture from Silpakorn University, Alisa is interested in creating artwork related to the physical body and feeling. Most of her work has been inspired by her personal experiences.

Before Alisa created Wound1 and Abrasion2 for "The Resonance", which were selected for display at the current exhibition, she lost a family member and felt so devastated that she couldn't create artwork for a while.

"I tried to restart myself and felt that drawing was the easiest thing to begin with. It is a straightforward process," said Alisa.

Drawing helps Alisa focus on art and once she started, she began to look for a concept to work on. The artist said that while taking care of her family member for months, she saw a relative experience fluid drainage in the lungs, leading to stitches.

"Last year, I also underwent surgery and I realised whether a patient survives or not, scars are left on his/her body and mind. I did some research in a hospital library about how post-mortem sutures for a corpse are different from surgical sutures for a living patient. Wound1 is a basic pattern of a surgical suture," she said.

Wound1 is a repetitive pattern and required a lot of concentration, however, Abrasion2 was easier to produce. To make Abrasion2, Alisa put black powder ink mixed with water on paper. Then, she quickly scratched the paper with a tungsten steel scribe pen.

"Abrasion2 was created in free form. I made it very quickly which was completely different from Wound1. Scratches on paper are similar to when our body tissue is damaged by a sharp object and leaves scars," said the artist.

"The Resonance" is an ongoing project by Alisa and she enjoys working on it. "I have many sculptures already and want to have more drawing pieces. I expect to see my work progress and in the future, I plan to do something bigger and want to challenge my limits," said Alisa. 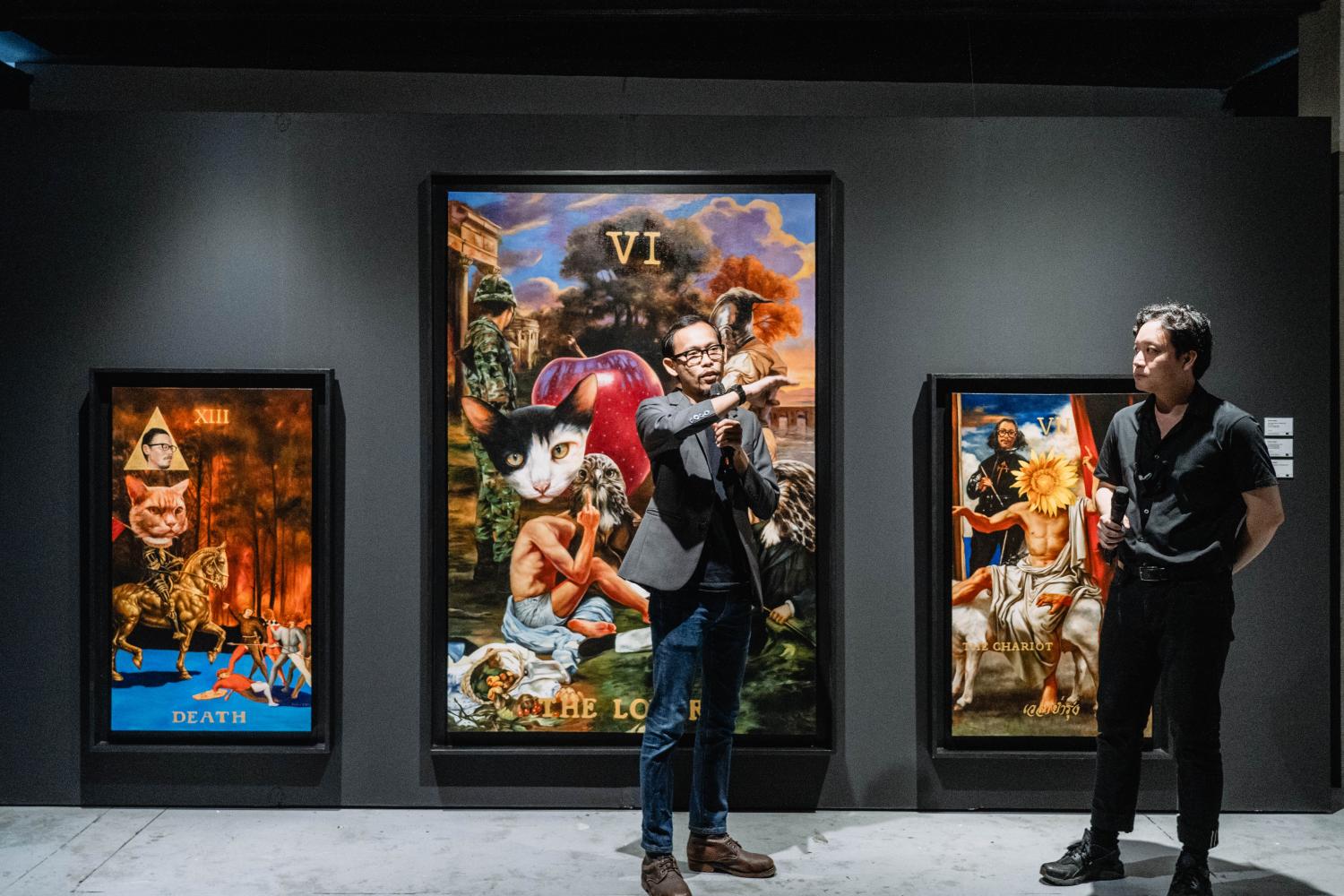 Kitikun earned a master's in visual arts from King Mongkut's Institute of Technology Ladkrabang. He admires old master paintings, so he uses their techniques and symbols to tell stories of today.

"The Prospect Series" is inspired by tarot cards, which are used to satirise political issues in Thailand. Three cards -- The Lovers, The Chariot and Death -- are exhibited. The Lovers was inspired by the classical painting The Luncheon On The Grass by Edouard Manet, a painting of a naked woman sitting next to two fully-dressed men which was criticised for its moral character. Meanwhile, The Lovers has the same theme as The Luncheon On The Grass but Kitikun changed the naked woman to a labourer.

"A labourer sits in the middle of the elite who have heads of hawks symbolising powerful people. Men with the head of a hawk are seen pointing guns at the labourer and forcing her to love other people. I painted this because I feel that Thai people are forced to love one another," said Kitikun.

Inspired by Jacques-Louis David's The Death Of Socrates, The Chariot was designed to honour Khana Ratsadon (The Peoples' Party) who launched the Siamese revolution of 1932. Kitikun respects the courage of the Peoples' Party who changed Thailand's system to become democratic. However, he believes something bad will happen due to political conflict and illustrated Death as part of his forecast.

"I predict that in the end, there will be battle and violence leading to loss," he said.

Kitikun plans to complete "The Prospect Series" with a total of 21 paintings to match the number of tarot cards. The artist has finished 14 paintings, so there is a long way to go still. After working on politically-charged paintings for several years, Kitikun has lost some friends because of political disagreement. However, he says he will not give up political artwork.

"I have to do what I believe in. I have to fight on and painting is my weapon of expression," Kitikun concluded. 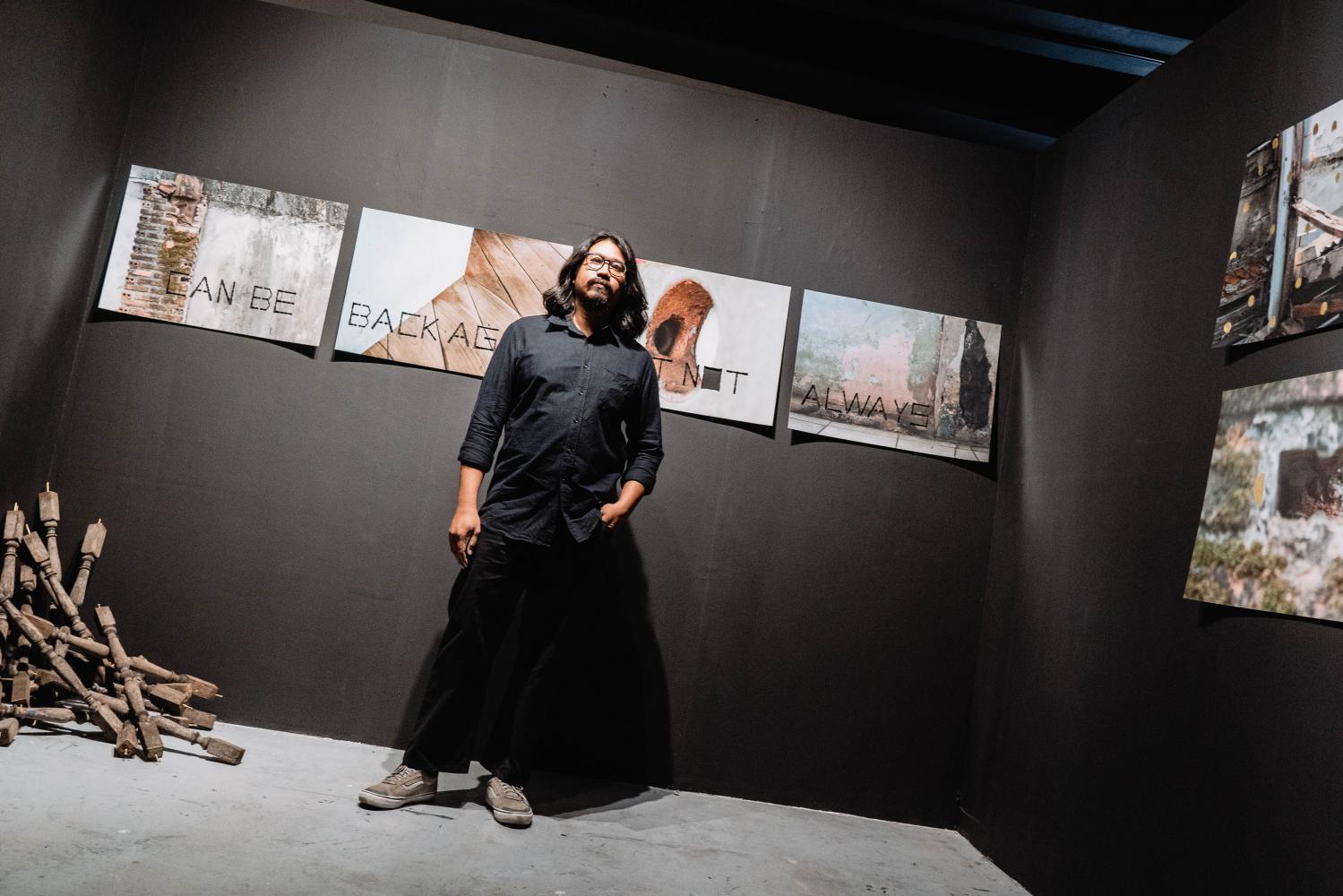 Surajate is particularly interested in issues relating to government policies that affect people in local communities. "Domino's" displays an installation of wooden battens and photos from the Mahakan Fort Community. People from the community were evicted from their home after the Bangkok Metropolitan Administration decided to transform old wooden houses in the area into a public park. On display, viewers can see a couple of nails, which Surajate gilded using traditional techniques, still stuck in the wooden battens.

The artist, who graduated with a Bachelor of Arts in Printmaking from the Faculty of Fine Arts, Chiang Mai University, explained that the golden nails symbolise people in the Mahakan Fort Community.

"I protected the nails using the gilded technique because they were pulled by a powerful engine. However, they suffered no damage, similar to people in the community who have the strength to live on. The message of the photos in 'Can Be Back Again, But Not Always' is that people in the community can return to their former neighbourhood but it will never be the same again," he said.

"Photos portray ruins of a house which refers to failures of government policy and management. There have been many consequences and burdens put on people in the community as a result of their decision. They had to find a new place to live and the BMA spent taxes to build a public park which not many people might use. The BMA claimed that they would transform the area into a beautiful landscape but true beauty is supposed to involve living communities," he added.

"Domino's" aims to remind people about such forgotten communities. Surajate said the Mahakan Fort Community is not the first to be evicted and memory of them will fade away like others before them. After the area became a public park, the artist visited again.

"It made me sad. There was cigarette ash, condoms, alcohol bottles and other kinds of trash everywhere. There were also homeless people in the park. All of this emphasises that the BMA wanted to have only surface beauty. They removed beautiful culture and lifestyle from the area and in its place received dirty and messy things," concluded Surajate.

"The End Is Now, Now Is Here: The Exploration Of Drawing" runs at SAC Gallery, Sukhumvit 39, until Jan 5. Admission is free. Visit facebook.com/sacbangkok or call 02-662-0299.