'Fight for the things that you care about but do it in a way that will lead others to join you."

The above quote was provided by Ruth Bader Ginsburg, the late associate justice of the Supreme Court of the United States, who was a driving force behind 26-year-old Kavita Supatravanij's desire to address gender-based violence.

During her time studying for a bachelor's degree at New York University, Kavita was part of the Feminist Club. Afterwards, while working in Singapore for an advertising firm, she founded a CSR initiative for her company which led her to link up with Aware, a leading gender equality advocacy group that addressed issues such as marital rape.

This was the beginning of her work with gender-based violence survivors.

Later, while pursuing an MSc in Social Innovation & Entrepreneurship at the London School of Economics, she met French-born Julie Sané-Pezet, who had a similar passion for helping gender-based violence victims.

Soon after, they co-founded a social enterprise Ila -- meaning the "Power Of Speech" -- which utilises a human-centred approach to help businesses become more inclusive while also empowering gender-based violence survivors. The social enterprise was born from their vision to connect like-minded individuals; largely young professionals who think outside the box and realise there is a space where passion meets profession. Ila has brought together people who embrace diversity, value differences, and those who do not hesitate when it comes to questioning change. 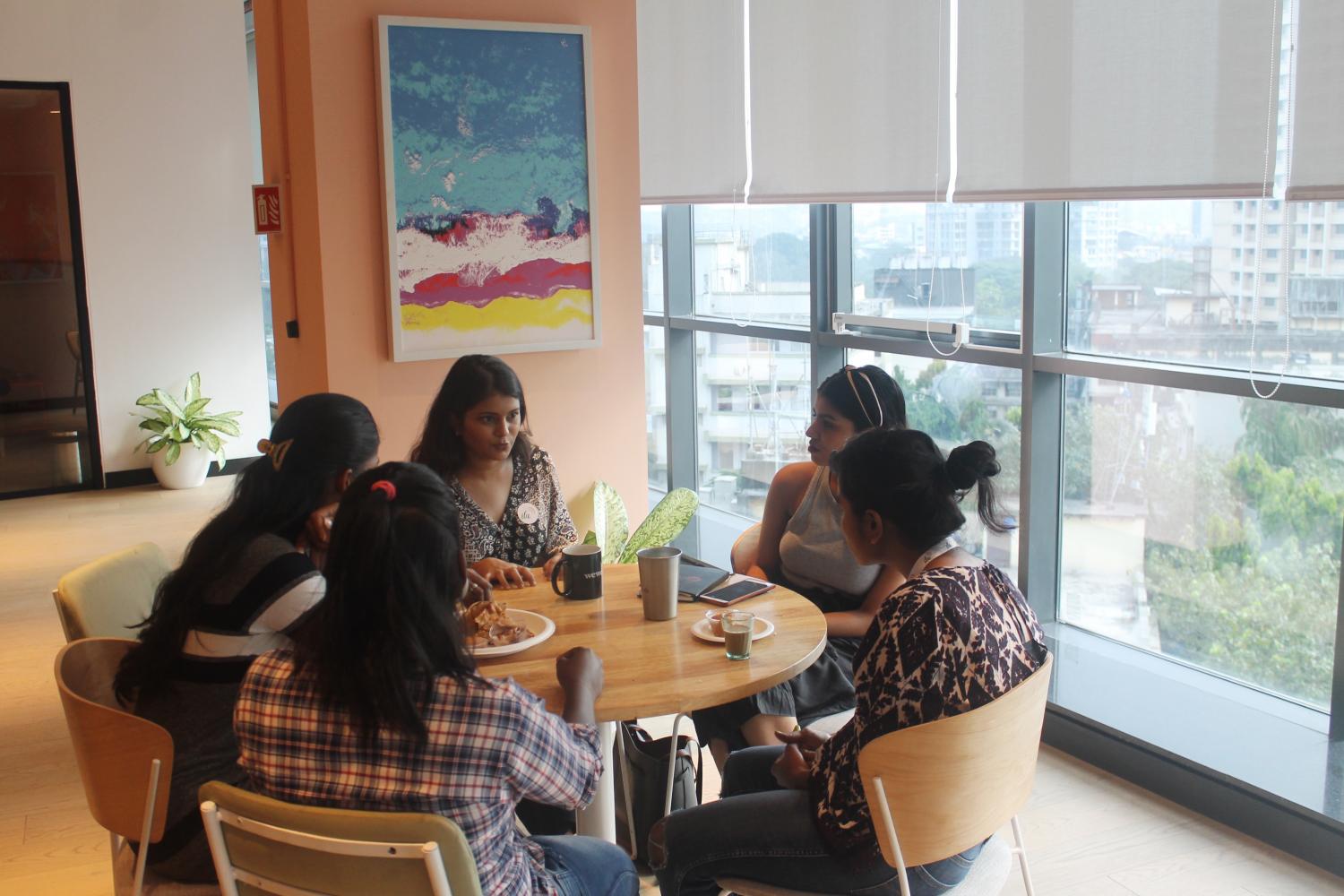 One of the many workshops Ila has held in Mumbai covers how to develop the skills of survivors of gender-based violence. Courtesy of ila, social enterprise

The enterprise was officially launched in June 2019 in London and it began skills-training workshops with survivors in November of that year in Mumbai.

However, the pair's latest endeavour is even bigger. Their latest mobile application, Ally, is due to be introduced to the public next year and will help bystanders reach out to domestic abuse victims.

As Ila gave the pair experience working with survivors of sexual violence via skills-training, they realised there was a need for intervention as domestic abuse has become more prevalent since the lockdowns due to Covid-19.

"When victims find themselves trapped, there are few places left for them to venture outsides besides grocery stores and pharmacies. In hindsight, we felt that what if we could train and equip employees to recognise signs of abuse and methods to redirect victims towards help? Currently, there are around 327 apps that are used to fight gender-based violence," explained Kavita.

"However, only 46% offer an emergency button and none provide training for bystanders on how they can assist. That's where our app, Ally, comes in.

"I believe social entrepreneurship is the key to post-Covid recovery, especially gender equality, which is currently one of the lowest-ranked UN Sustainable Goals in terms of corporate investment. We have finished a prototype so the bare bones of the structure are already there.

"Having participated in many focus groups with relevant stakeholders -- survivors of domestic abuse, retail staff, corporations with storefronts -- we realised that from the survivor's aspect, the two words that kept coming up when we asked them how they felt about Ally was 'inclusive' and 'required'. Over the next few months, we will focus on tweaking feedback and putting the finishing touches together."

Kavita said employees can navigate Ally like they would any other smartphone application. However, what makes Ally different is that it does not provide your average "sexual harassment training" or even a regular "training" that lasts for days sometimes. Instead, she wanted to give users the power to control how they learn and when they can access this knowledge. 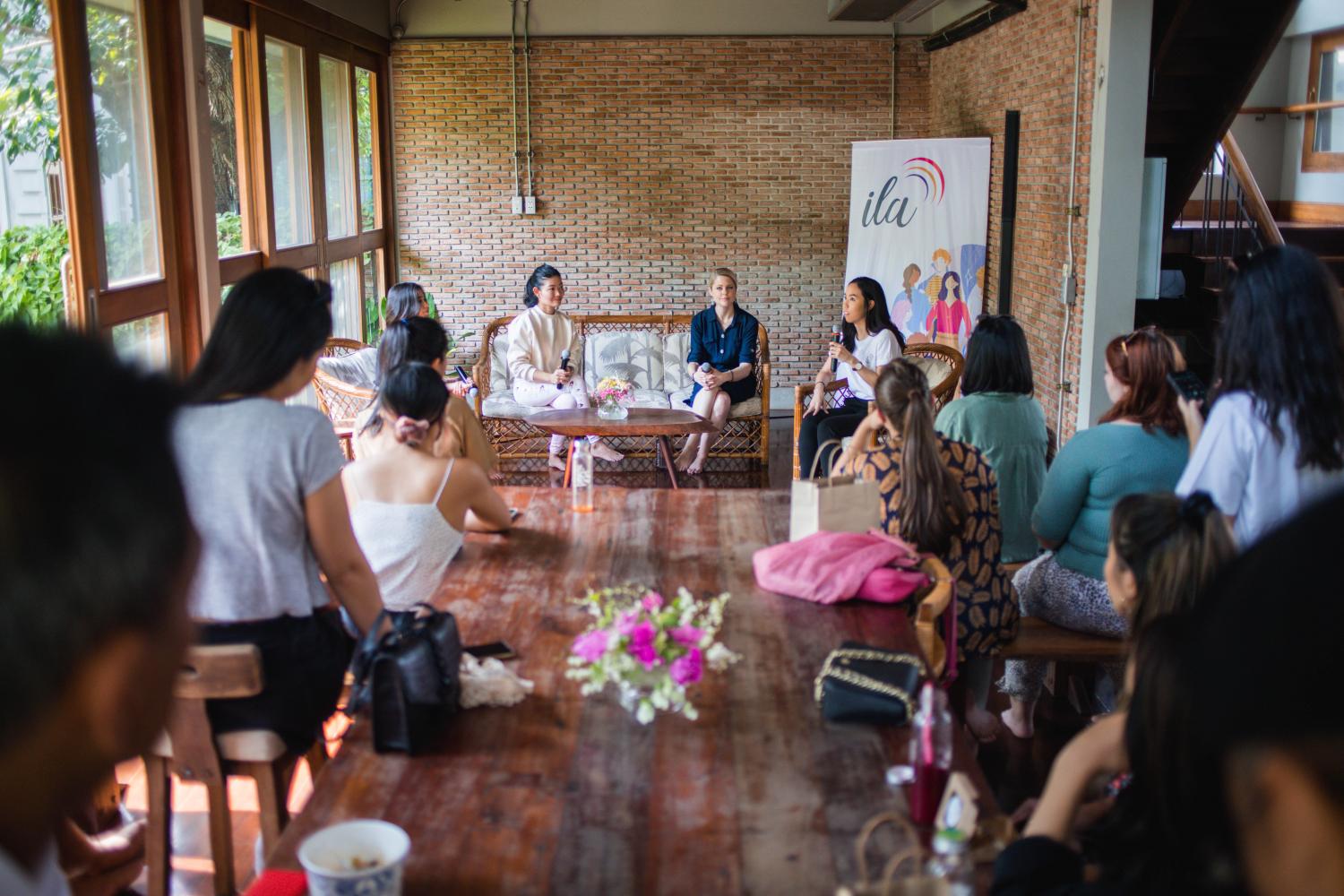 Among her many engagements, Kavita spoke about her work at the recent Farmer's Market Panel with UN Women. Courtesy of ila, social enterprise

"We have different training modules to educate users on the different aspects of sexual abuse and how they can become better allies in this fight. Our goal for the app was to make it interactive and engaging similar to learning applications like Headspace or Duolingo."

Kavita said the application is well-suited for Thailand because it addresses the fear of people not wanting to interfere in domestic disputes that turn violent.

"We know that 95% of Thais do not want to interfere because they feel it is a family issue, but the thing is that they actually do want to help but they do not want to mess up the family dynamics. So with our application, we are equipping bystanders with a training tool to become more aware of who is experiencing domestic abuse and how they might be able to help them without becoming intrusive. The whole premise of Ally is training people to recognise signs and redirect victims towards help."

Kavita said this system can be implemented anywhere from convenience stores to coffeehouses and more.

Describing a typical scenario, she said employees from the check-out counter to the barista who makes your drinks can be trained using the application after which they will be able to recognise if someone that comes into their stores is displaying certain signs that indicate domestic abuse.

Moreover, due to the non-intrusive nature of the skills that will be taught, it will be very much about allyship and finding safe spaces for victims to go to.

Ally, said Kavita, has always been their expertise. With all the experience they have had in conducting workshops of this nature, she said the only difference now is that it has shifted to an online format.

"It is just like any other training but instead of training the survivors, we will be training bystanders to become allies."

Based on her experiences, she said addressing gender-based violence is imperative on multiple levels because it affects every aspect of society from the manner in which we regard ourselves and what we believe we can accomplish, to the respect we think we or others deserve.

While shedding light on what continues to drive her team at Ila, Kavita said that for them, addressing gender issues and challenging the biases of society goes beyond empowering women. What the focus has always been is getting people together to build inclusive and safe spaces for them to thrive in and contribute to society.

"Gender-based violence is truly the direst expression of gender inequality. Not only does it have a grave impact on survivors' lives but it also tells a lot about the roots and mechanisms of gender-based discrimination. At Ila, we want to tackle the problem where it hurts the most."