For over a century, Rolex has been synonymous with inventions, which include its easy-to-pronounce brand name coined by Hans Wilsdorf 12 years before he founded the prolific watchmaking empire. 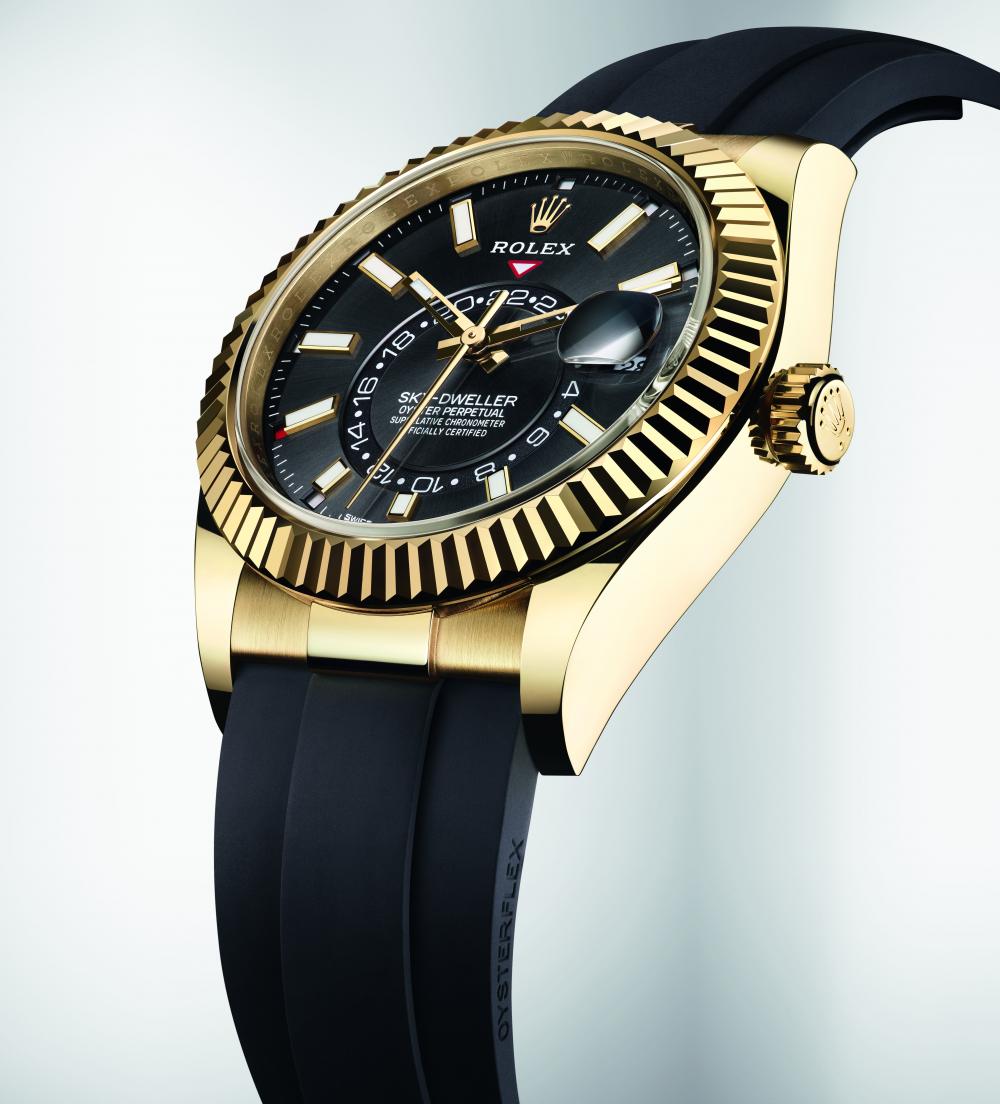 The Oyster Perpetual Sky-Dweller in 18ct yellow gold with a bright black dial and Oysterflex bracelet.

"I tried combining the letters of the alphabet in every possible way. This gave me some 100 names but none of them felt quite right. One morning, while riding on the upper deck of a horse-drawn omnibus along Cheapside in the City of London, a genie whispered 'Rolex' in my ear," Wilsdorf said.

After settling in Geneva, he established Montres Rolex S.A. in 1920. Starting with the Oyster waterproof wristwatch and Perpetual rotor invented in 1926 and 1931, Rolex's list of innovations has lengthened to include patented materials and movement parts.

Multiple patent applications were filed over the course of the development of Oyster Perpetual Sky-Dweller, which ultimately resulted in a 21st-century technological masterpiece released in 2012. 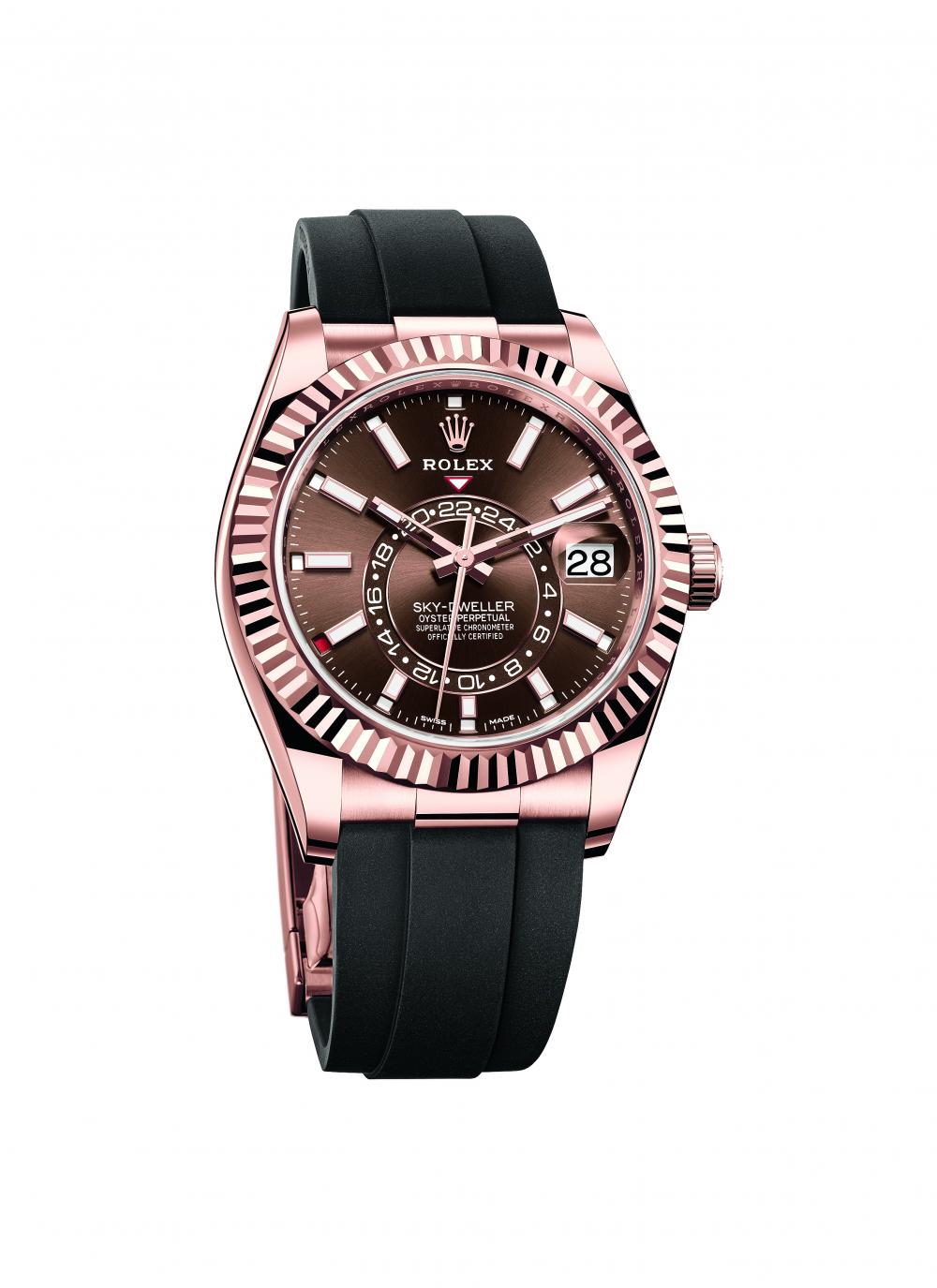 The local time is indicated by conventional centre hands while a fixed inverted red triangle on the dial points to the chosen reference time -- the time at home or at the traveller's usual workplace -- on an off-centre 24-hour disc.

At a glance, this 24-hour display clearly distinguishes daytime hours from night-time hours in the other time zone.

Named after the cycle which governs the periodicity and recurrence of eclipses, the Saros annual calendar with a patented mechanism automatically differentiates between 30- and 31-day months.

The innovative display indicates the months of the year in 12 apertures around the circumference of the dial, with the current month marked by red.

Another Rolex invention dating back to the early 1950s, the signature Cyclops lens magnifies the date at 3 o'clock.

The annual calendar displays the correct date throughout the year. Only one adjustment is needed -- on March 1 as February has only 28 or 29 days. The date is connected to local time and automatically changes according to the traveller's local time zone.

The dial features a Chromalight display as the rectangular index hour markers and longer hands are coated or filled with a luminescent material that emits a long-lasting blue glow in dark conditions. 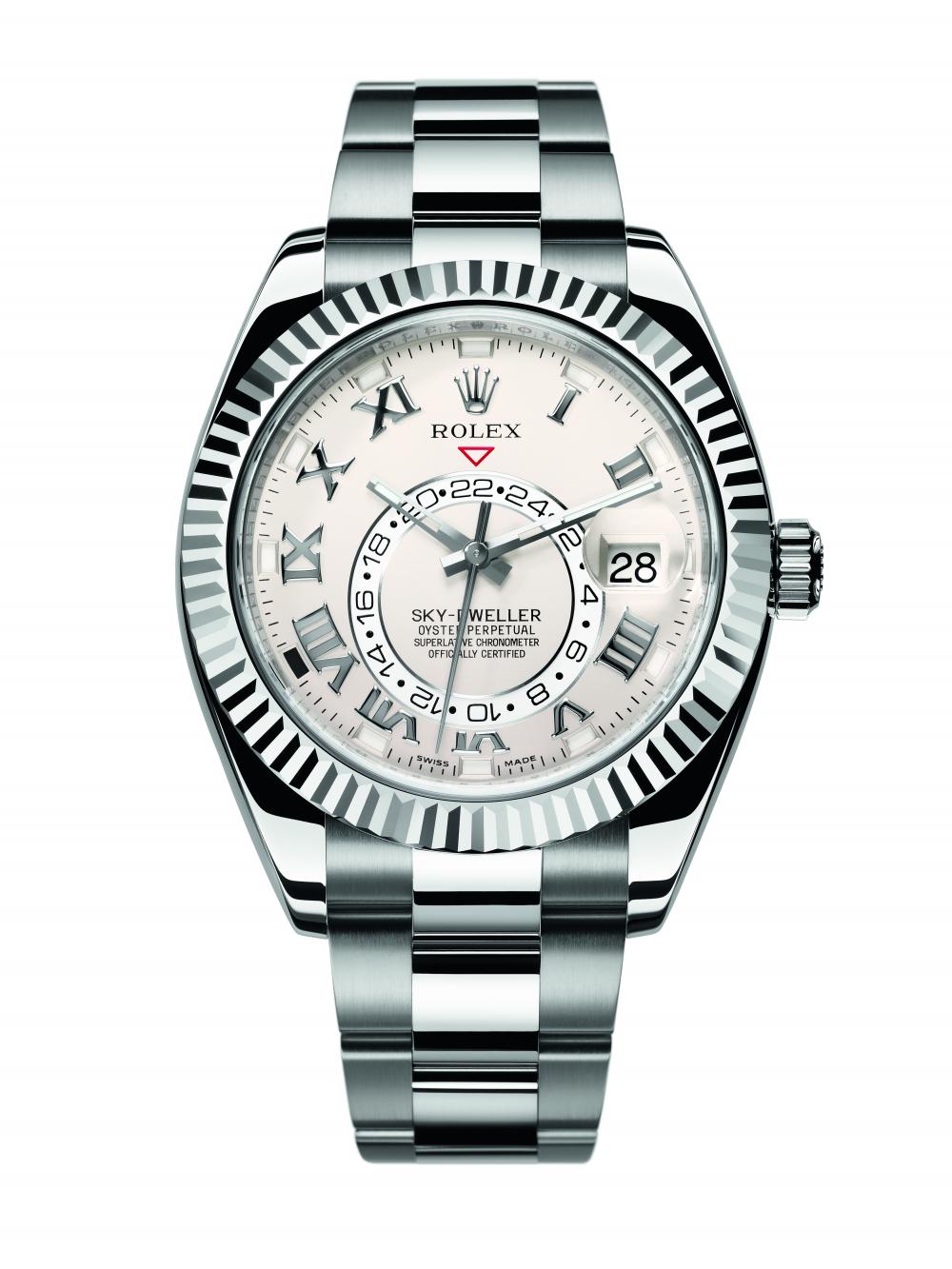 The original Oyster Perpetual Sky-Dweller was launched in 2012.

An interface between the fluted rotatable bezel, winding crown and movement, the Ring Command system allows selecting and setting the functions one by one.

Guaranteed waterproof to a depth of 100m, the Oyster case is fitted with the Oysterflex bracelet, which combines the robustness and reliability of a metal bracelet with the flexibility, comfort and aesthetics of an elastomer strap.

Developed and patented by Rolex, this innovative bracelet is made up of flexible metal blades manufactured from a titanium and nickel alloy.

The blades are over-moulded with high-performance black elastomer, a material that is particularly resistant to environmental effects and durable. For enhanced comfort, the inside of the Oysterflex bracelet features a patented longitudinal cushion system that stabilises the watch on the wrist.

Rolex also developed and patented the folding Oysterclasp and Glidelock extension system, which allows adjustment of the bracelet's length, without tools, up to some 15mm.

The new Oyster Perpetual Sky-Dweller timepieces are powered by Calibre 9001 developed and manufactured in-house and is equipped with a self-winding module via the Perpetual rotor while offering a power reserve of approximately 72 hours.

With multiple patents filed, this mechanical, self-winding movement is one of the most complex calibres created by the brand. Its architecture, manufacturing and innovative features render precision and reliability.

The blue Parachrom hairspring is made from an exclusive paramagnetic alloy that makes it up to 10 times more precise than a traditional hairspring in case of shocks.

The Rolex overcoil further ensures the calibre's regularity in any position, and the oscillator is fitted on the patented Paraflex shock absorbers, increasing the movement's shock resistance.

Covered by the Superlative Chronometer certification, each Oyster Perpetual Sky-Dweller model, like other Rolex watches, has successfully undergone a series of tests conducted by the Swiss brand in its own laboratories according to its own criteria.

These certification tests apply to the fully assembled watch, after casing the movement, guaranteeing superlative performance on the wrist in terms of precision, power reserve, waterproofness and self-winding. 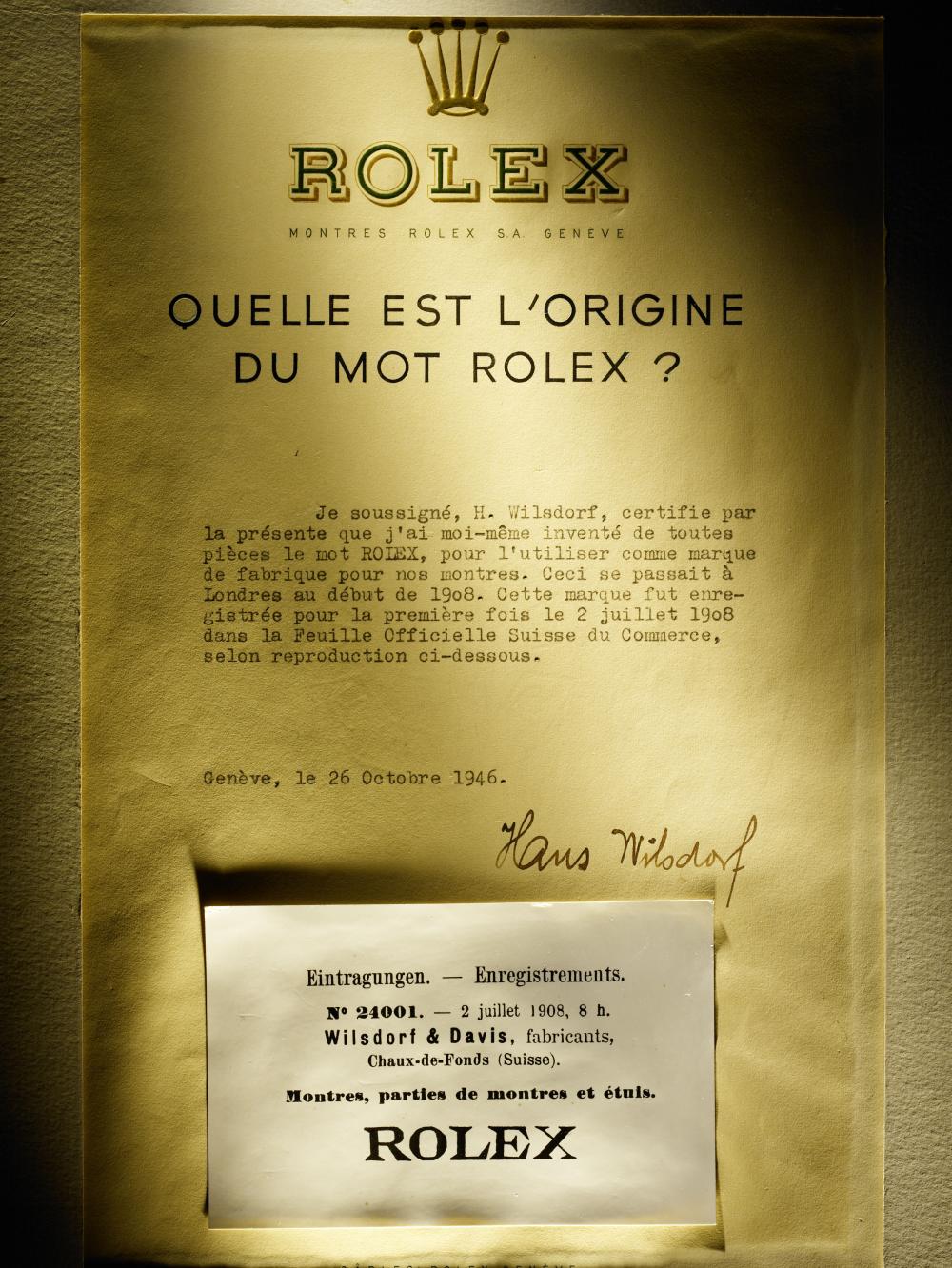 A certificate of the Rolex brand name, coined by Hans Wilsdorf in 1908.