Food delivery service has been a godsend for many during the coronavirus pandemic.

While offering diners a safe and convenient way of obtaining food and other necessities, it also provides riders access to income in this time of high unemployment.

But today, more than 100,000 delivery riders are believed to be navigating Bangkok's streets, making an already competitive market more difficult to earn a living wage.

Many drivers said they entered the food delivery arena for the self-directed flexibility the occupation allows. Others say they were tempted by what they believed to be easy earnings.

But few knew this path to perceived riches was full of potholes that would eat into their meagre profits.

While there are a few riders that can make up to 80,000 baht a month, they are outliers. Most food delivery workers barely scrape by, with unexpected expenses such as the uniforms and delivery boxes and bags the food service companies force the drivers to buy.

Our "food angels" exist at the bottom of the metaphorical food chain, exposing their lives to danger that has several drivers wondering if the benefits outweigh the cost. Here are a few of their stories.

Nat stepped into the food delivery service scene as soon as she learned about the spreading of coronavirus in China in December 2019. She was working as a tour guide and began to see some travel cancellations.

"I immediately knew I needed a backup plan for income. Being a motorcycle rider myself, food delivery seemed like a perfect option." 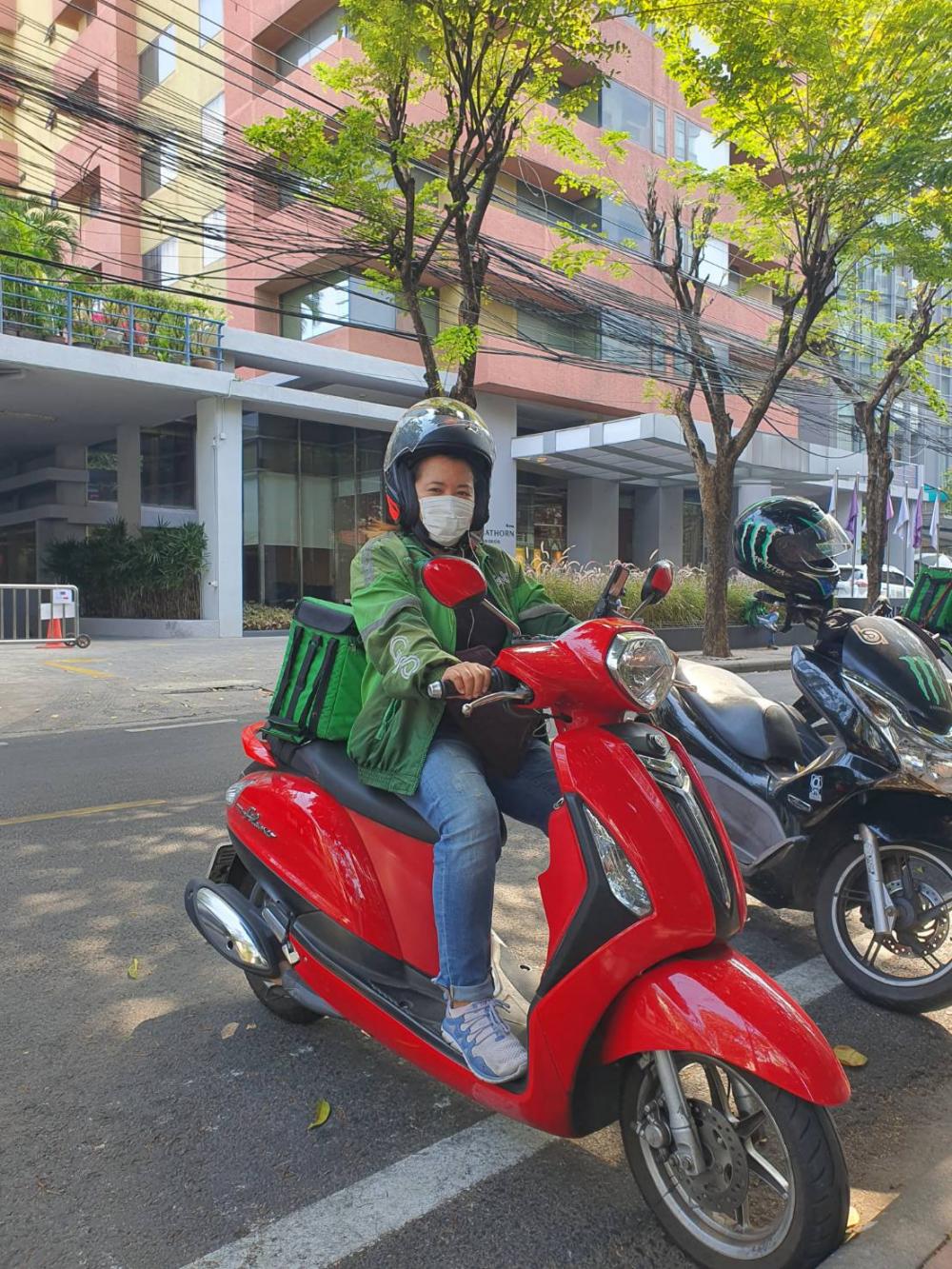 She started working part-time. But by the end of March as she gained more knowledge of the city streets, she began riding full-time, working 10-12 hours a day.

Nat said, just like any new adventure, the job brought pleasant thrills at the beginning.

"One of my first few trips was to deliver a cake to a family. When I arrived, the mother and young daughter were outside waiting. The girl told me it was her birthday so I sang her Happy Birthday. She was as much flattered as I was happy.

"Some trips may take five just minutes to deliver but half-an-hour more to play with the customer's dogs. They wouldn't let me leave," she recalled with a big grin.

But the pleasure quickly faded. Now, she says her focus is on maintaining security.

"Safety is my main concern no matter what I do.

"During the first phase of the pandemic, my latest delivery would be around 7pm. But as the number of riders rapidly increased, I had to extend my hours until 11pm in order to maintain my usual level of income."

This forced Nat to relocate her working base from her usual Thon Buri neighbourhood -- which is known for petty crimes after dark -- to Silom-Sathon.

Street dangers are minor compared to the ill treatment she receives from some restaurant owners and customers.

"Some restaurants treat us like we are less of a human being. The riders are not allowed to even step foot inside the restaurant. We sometimes have to wait outside in the sun or rain.

"The company would repay us for those false orders and we get to eat the unclaimed food. But we are not working for free food. We work for the delivery fee, which in such cases are calculated as zero."

Nat works for Grab, which pays its riders per trip.

Even with her average of 400 trips per month, she said her income as a delivery rider is nowhere near that of a tour guide.

"There are additional benefits and incentives if you reach a specific number of trips, which is, for me, too laborious."

Some of her rider fellows make as much as 20,000 baht per week, working from 5am to midnight.

"Being a delivery rider gives me a breath of life but it is far from a dream job. We are exposed to traffic accidents, pollution, crime and bad social treatment. It's a stressful job but still better than running into debt."

'Delivery service is a good solution for me, especially during the souring economy when your full time job is not stable," said Tito, a part-time rider whose daytime occupation is as a factory mechanic technician.

He entered the delivery service sphere two years ago, looking for a way to earn extra income.

During the first phase of the pandemic, he made around 1,000 baht per day.

"The money was so good I thought I could turn it into my full-time job," said the 25-year-old.

Tito works for Lineman, whose delivery assignments are something of a free-for-all.

Delivery orders are available to every Lineman rider within a 3km radius of the restaurant. Riders can choose whether to fetch the task. Only the swift and strong survive.

Drivers also need a good, fast smartphone and a reliable and fast internet connection, an expense that cuts into their profits.

Tito says he doesn't mind the competitive environment as long as everyone plays by the same rules. But he said some riders seek an advantage by using dirty tactics.

"It's an absolute dog-eat-dog arena. The more riders the company hires means the less chance you'll be able to earn a decent income. The proportion of commission fees available to you will decrease.

"Since I started two years ago, commissions have been lowered twice."

Tito also noted that inconsiderate customers make the job more difficult than it needs to be.

"Quite often I have to wait unnecessarily long for customers to come pick up their order, causing me to miss new jobs.

"Sometimes when placing the order customers just give the name of the estate without their house number. And when I call they often don't answer. It leaves me no choice but to wait."

I met Mayz at my front gate as he delivered my food a few days ago.

Affable and beaming, he didn't seem to mind my irrelevant questions about his day nor my approach as a journalist. 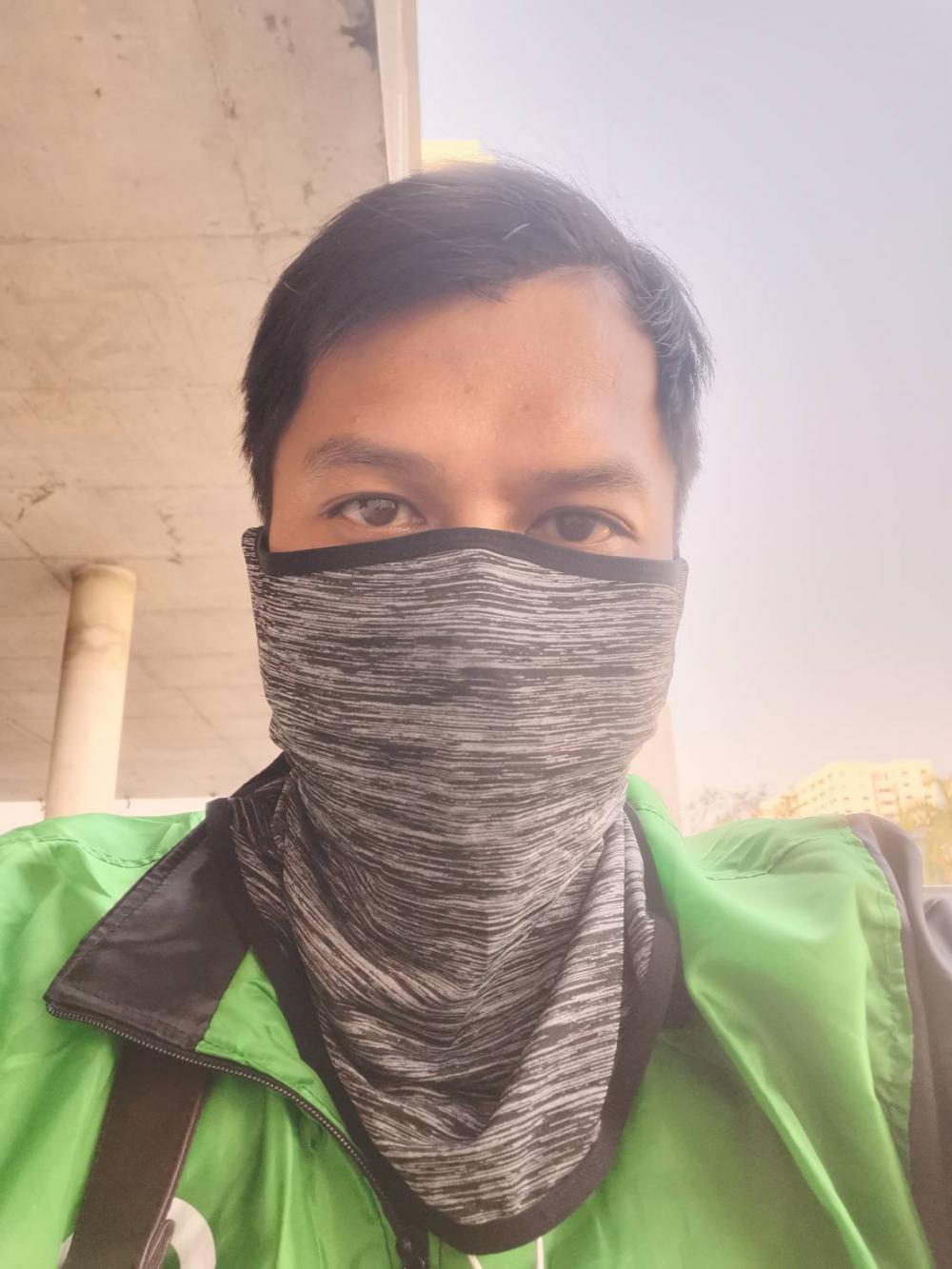 "Either he's super friendly or he's very new on the job," I thought.

Boy, was I right.

His full-time job over the past years was location scouting.

As a crucial part of film productions, he has worked with many international agencies and made very good money.

"With the pause of travelling, there are no jobs from international companies. Location scouts like me have to rely mainly on domestic productions. So I needed to find a second job that allows me to earn extra income while flexible enough to suit my spare time."

The 36-year-old said he realised it's a risky job but there's no better option at the moment.

"Being a rider is accident-prone. And once you are injured, it means your earning stops.

"This is not a job to treasure but to endure. Riders are exposed to dangers every day, especially from distracted drivers obsessed with their phones.

"The riders as well have to rely on smartphones and sometimes it's hard to switch our focus back and forth between the screen and the road."

Mayz said he's come across some quick-tempered customers. But he sees it as a normal part of the job.

"This is a service business so it's important to forget my ego or I wouldn't survive a week on the job.

"To land myself on another venture is a just matter of time. I don't think the rider job will get any better. The longer the pandemic continues, the more careful people have to be when it comes to spending. I very much doubt they'll be able to enjoy ordering food for long."

Somphop's full-time job is as a messenger for a financial institution.

The 53-year-old, who started riding for Grab Food nine months ago, said delivering food is much more arduous than transporting documents and parcels.

"It takes more than just a motorcycle and riding skill to be a food delivery rider.

"First, you are required to buy the company jacket and box. Then you have to learn how the system works. While on the road, you need to have lots of patience dealing with the long wait at restaurants and the customers' temperament."

Somphop said he didn't mind the wait at the restaurant nor walking up four flights of stairs to reach his customers. But too often he faces an unbearable amount of insensitivity from people.

"Some customers had me wait more than half-an-hour to pick up their orders.

"Or if the address was unclear and I called for more details, they would raise their voice or sometimes hang up on me."

When facing a cranky client, Somphop said an apology is the only thing he can offer.

Once a customer made a complaint causing him to be temporarily suspended, with Grab shutting his system down.

He finds working night hours to be alarming. Drivers can sometimes carry quite a bit of cash, leaving them vulnerable to unsavoury characters. A driver friend of his was mugged in the middle of the city after dark. "I once delivered food to a run-down neighbourhood at night. It didn't look like a safe place and wondered if I could get out of there alive or whether the risk was worth the delivery fee."

Somphop said the food delivery business was very good during the first phase of the pandemic. But it's quietened down, and he believes it will be even quieter in the future.

"More people are becoming unemployed so the number of riders is rising. The food delivery field is getting not just more competitive but also more dangerous.

"Every rider is trying to finish their trip as quickly as they can. So they have to ride fast. Being on the road now is terrifying."