Prior to arriving at Mei Jiang, I knew the dinner we were about to have would be exclusive. It would be some kind of a chef's table experience and involve eating in the kitchen.

Being a food writer for two decades I thought I'd seen it all. Nothing but excellent quality food could now thrill me. But I was wrong.

That particular meal there turned out to be an awe-inspiring affair that's outright herbivorous yet sublime in every detail. It's the country's first of its kind indeed.

Our party of three diners entered Mei Jiang Exclusive, this week's subject of review, through the dining room of the 22-year-old Chinese restaurant. 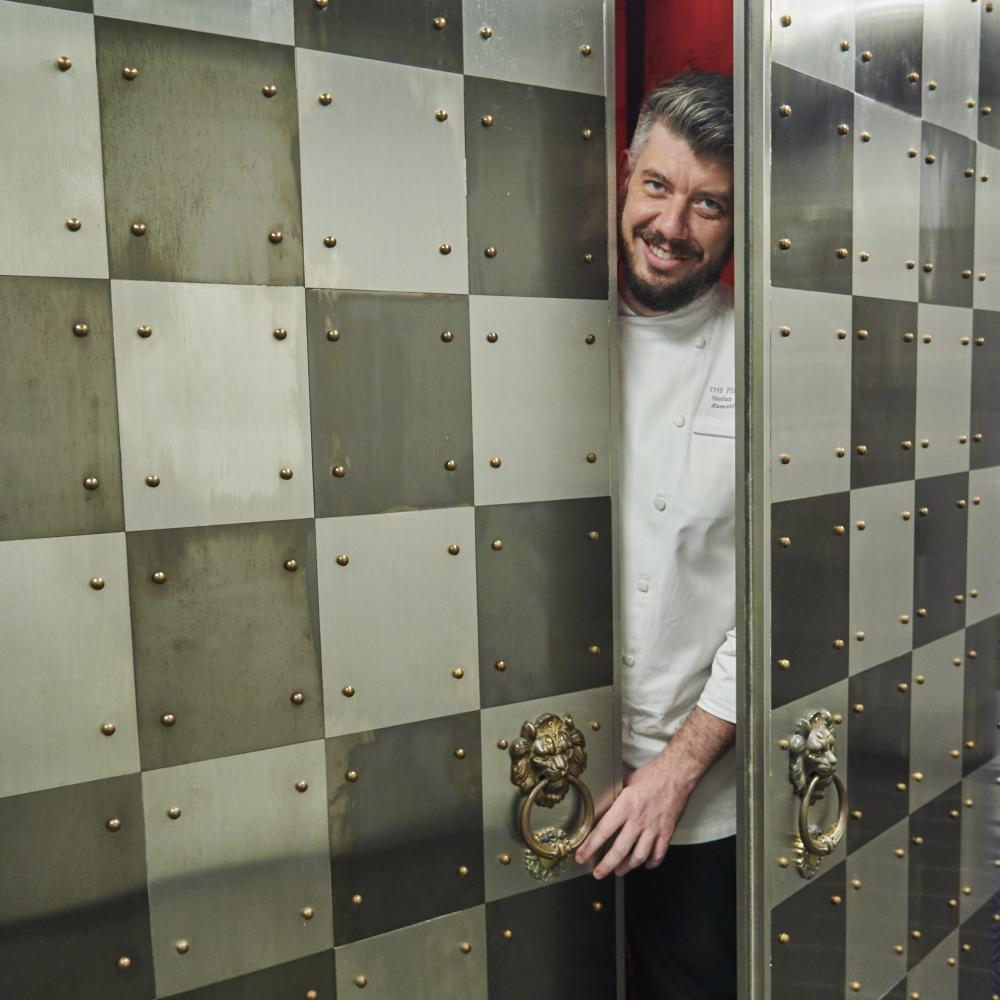 Mei Jiang's usual business, adored by connoisseurs of refined Cantonese cuisine, tourists and locals alike, has been halted since last March due to the pandemic. This has allowed management plenty of time to come up with a new culinary approach as an alternative to welcome back diners. And a bespoke plant-based cuisine is their choice.

The concept, which answers timely to the worldwide trend of veganism, is orchestrated by the hotel's Austrian executive chef Stefan Leitner together with Mei Jiang's team of chefs and dim sum masters.

The menu takes cues from the best seasonal ingredients from around the world but uses only traditional Chinese cooking methods.

The restaurant's all-chrome kitchen, graced with seaweed aquariums (for both visual pleasure and cooking), serves as one of the three theatrical dining venues of the dinner.

It's where, on the night that we visited, an amuse-bouche selection of a crispy taco with eggplant jam and spicy chive relish and a xiao long bao dumpling with radish, cucumber and water chestnut, were served with a welcoming glass of Krug Grande Cuvee.

After the introductory snacking, we were then escorted to what I'd call the "secret chamber". 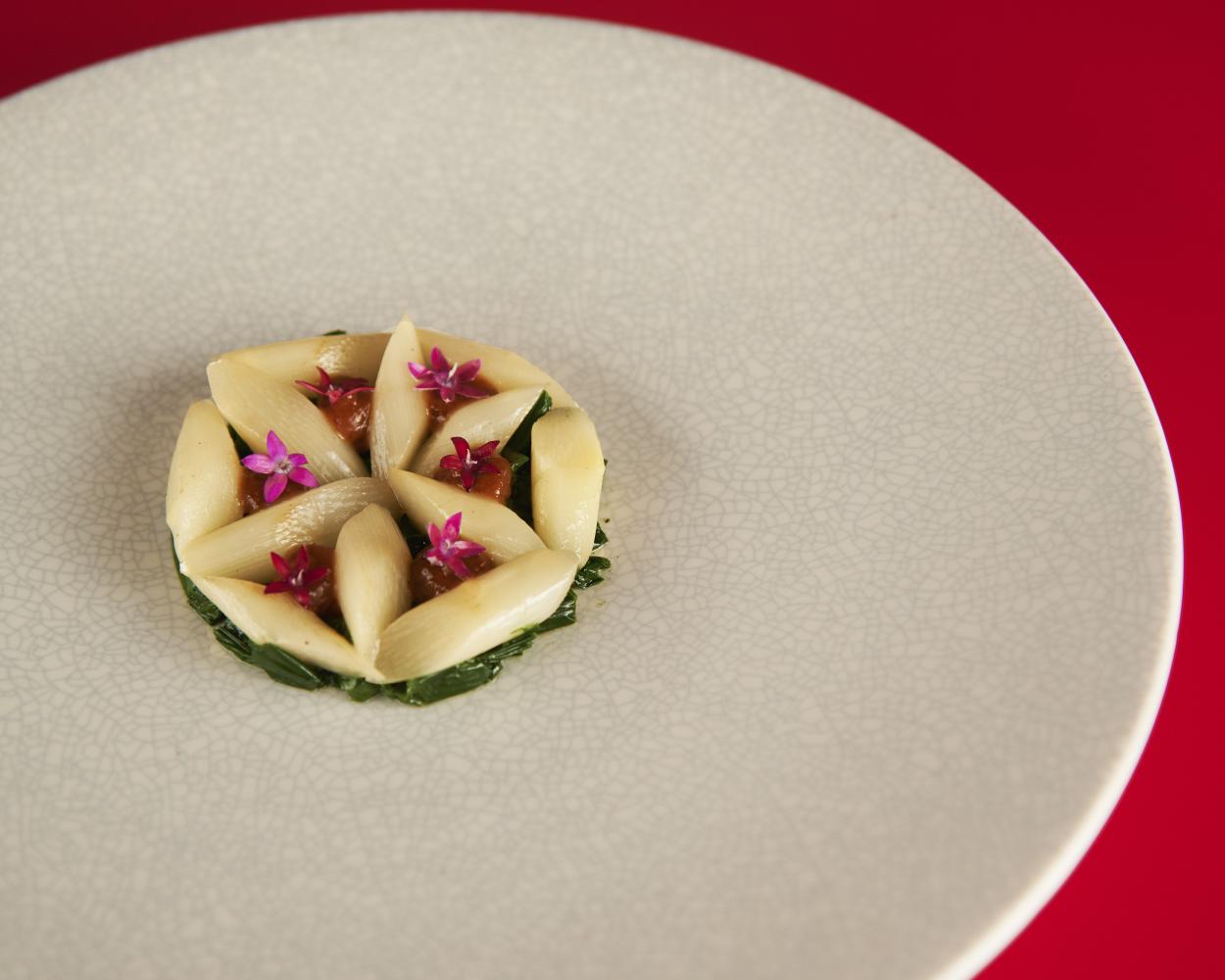 Above A dish of French white asparagus, German garlic leaves and XO sauce.

The room hid behind a custom-made steel door. With a capacity to seat only four diners, it was decked out in a ravishing hue illuminated by high-ceiling chandeliers to offer a very intimate feel. A dining counter was set against an expansive glass window that allows a view of the ever-active kitchen, while downtempo electro-ethnic background music added to the room a jazzy Shanghai vibe.

Culinary-wise, Mei Jiang Exclusive is a nine-course experiential dinner (8,180 baht per person) presented in the chef's table style. Available upon reservation, each night a maximum of four guests will get to enjoy the restaurant's signature plant-based menu.

Upon seating the guests are treated to marvellous dairy-free bread and house-smoked cashew nut butter. They were so good you need to be reminded not to ask for more, although you can, and overstuff yourself before the meal officially kicks off.

The first course is described simply as the Barbecue.

Inspired by two Chinese classic dishes, Hangzhou Beggar's chicken and Cantonese barbecue pork, it features king oyster mushroom wrapped in a lotus leaf and slow-cooked in a clay bag (the same method as the Beggar's chicken), before being flavoured with Chinese vinegar and char siu (barbecue pork) sauce.

The large mushroom was served diced and artistically arranged with fine shavings of fresh Italian black truffle atop. The fungi provided a very firm and pleasantly gummy mouthfeel with a slight hint of smokiness that went well with the savoury sweet reddish brown sauce that looked and tasted almost identical to the Hong Kong-style barbecue pork gravy. 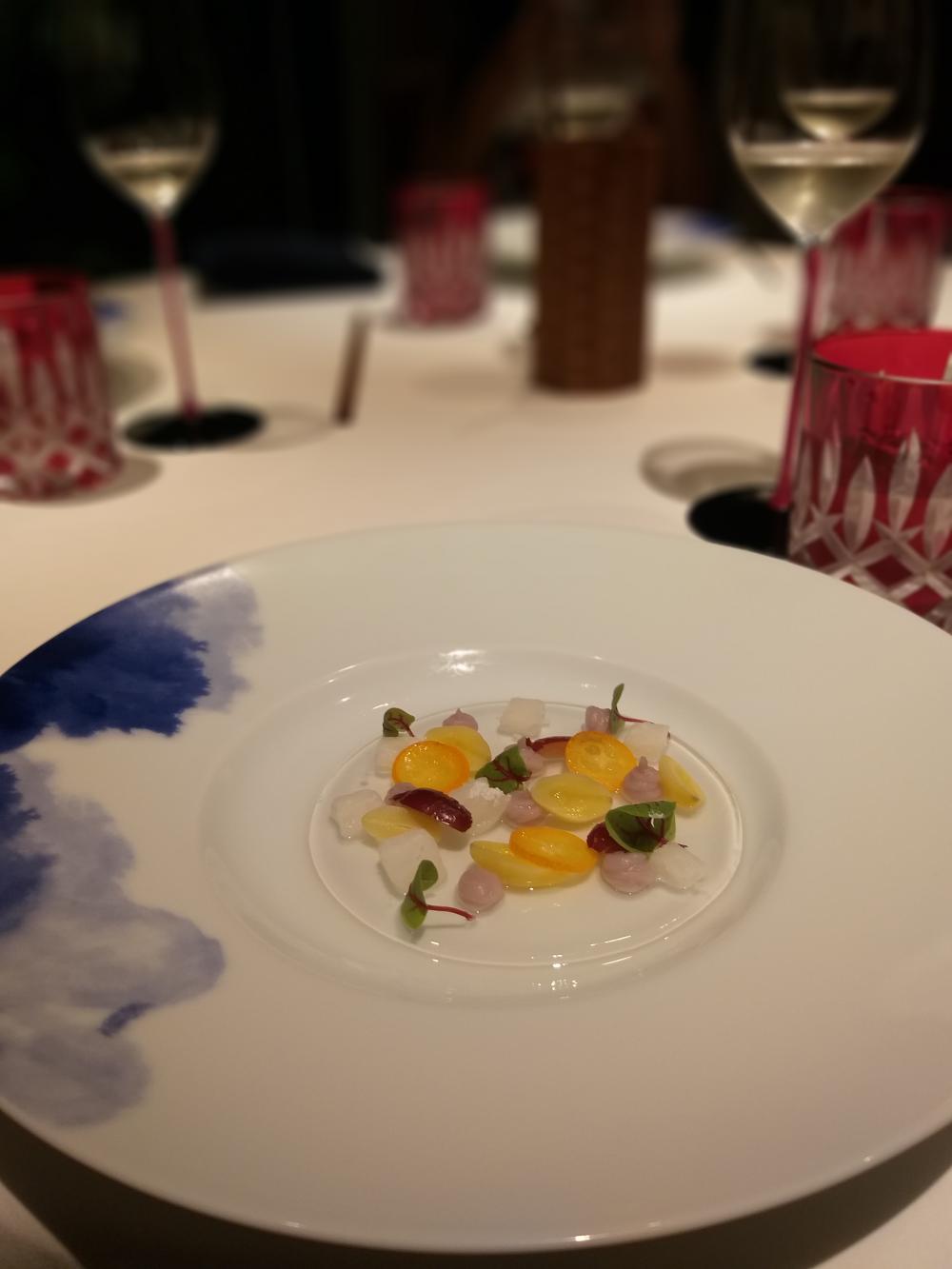 Next up was the chef's rendition of a seascape which staged three kinds of seaweed from the aquarium.

There are deep-fried battered ulva seaweed (aka sea lettuce), steamed gracilaria (aka angel's hair seaweed) dumpling and a salad of sea grape (aka green caviar) with creamy coriander-cucumber espuma. This course is a photogenic exhibition of electrifying tastes and textures.

Ginseng root and cordyceps sourced from Tibet are the main highlight of the menu's soup course. Cooked for 24 hours in a double-boiled winter melon stock, the soup yields a naturally sweet golden consommé. The piping hot clear soup was lent a balancing contrast of flavours and consistency by side items of pickled winter melon, lotus root crisp, puffed black sago and spicy shiitake sauce. 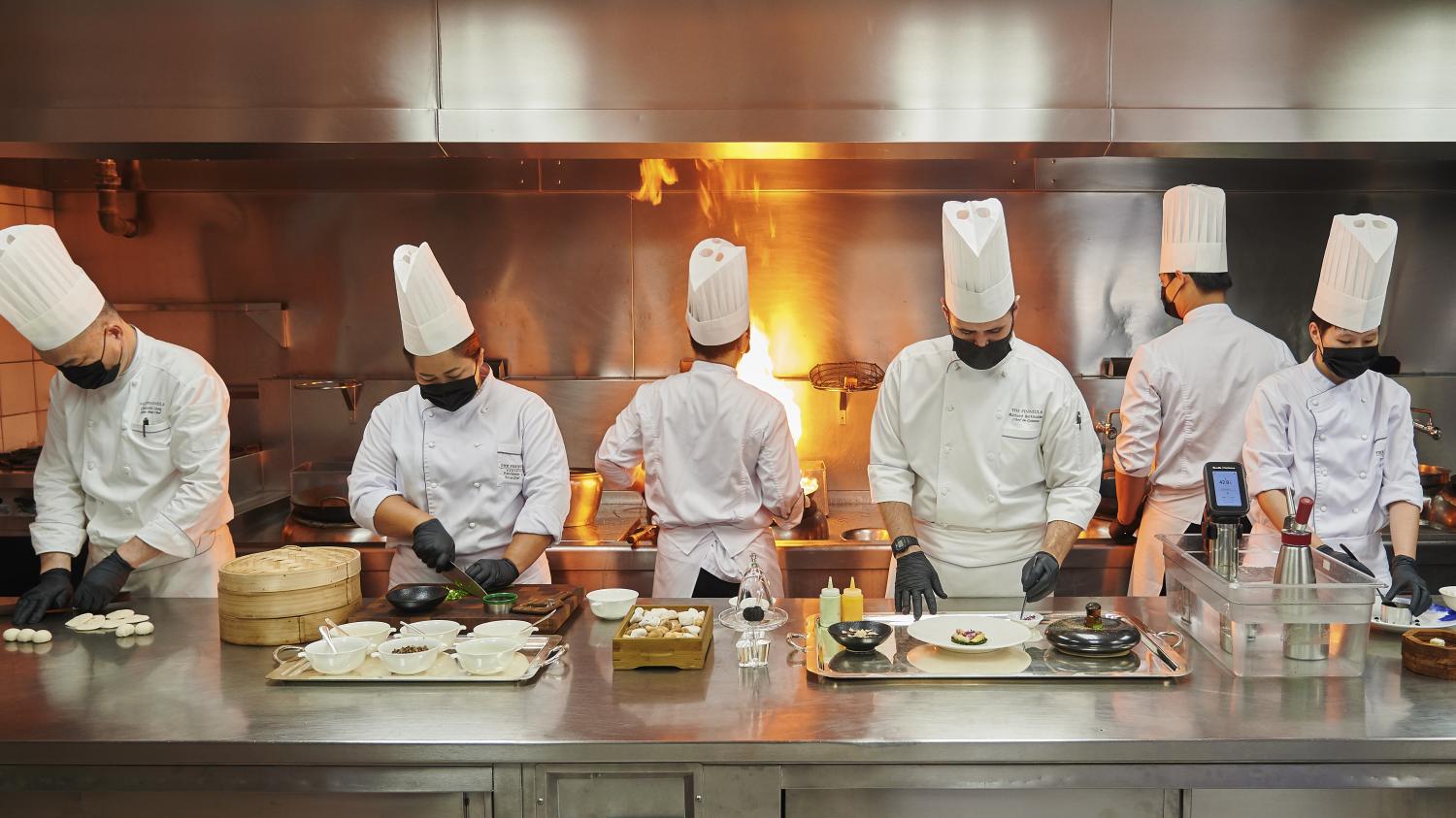 The main course, dubbed "Our Sweet & Sour", showcases chef Leitner's meat-free portrayal on Mei Jiang's all-time popular dish of sweet and sour pork. Before us were crispy pieces of mock meat, which offered the same succulency as the original, that came with clingy rice noodle sheets on a bed of zesty sweet and sour espuma, made with Phuket pineapple.

I came to admire more and more, as the meal progressed, how perfect this collaboration of the Austrian executive chef and his Chinese cuisine chefs was.

Despite the non-meat presentation, every dish, as ethereal as it looked, offered a solid taste profile of refined Chinese fare.

The statement proved true also for the next dish which, interestingly, showcased white asparagus from France and garlic leaves from Germany -- both vegetables are now at the peak of the season in Europe. The perfectly-braised chubby asparagus successfully demonstrated its genuine sweet taste and bracing crunch. They were served on a bed of the garlic leaves that's been wok-fried very quickly over high flame to develop a wok-burnt aroma, one of the most-treasured characteristics of Cantonese cuisine, while still allowing the vegetable to retain its freshness. Enhancing the taste of the greens was globules of plant-based XO sauce.

The sixth course was a delicious helping of pumpkin tofu with bamboo shoot, porcini soy and yam.

The room doubles also as an exclusive art exhibition where a ceramic sculpture centrepiece by renowned artist Wasinburee Supanichvoraparch and drawings by Pranai Kasemtavornsilpa are displayed.

To match such an extraordinary meal are top-of-the-line glassware and cutlery by Riedel and Vera Pure.