Amid the jubilation, there was a brief moment of uneasiness. Last September, during a ceremony to award the United Nations Development Programme (UNDP) Equator Prize held at the Boon Rueang wetland forest in Chiang Rai province, participants noticed the ground was much drier than it used to be. The moderator even joked that had the "wetland forest" venue been as wet as before during the monsoon season, they would have been celebrating the occasion partly submerged.

As months went by, the matter became worrisome for Pimpun Wongchaiya, a Boon Rueang native. The wetland swamps fed by creeks from the nearby Doi Luang mountains and Ing River, a Mekong tributary in the Golden Triangle, had reached critically low levels, threatening the fish.

"The Mekong has not backed up into the Ing River where our wetland forest is. I'm concerned about what it will be like for our children's generations," the mother of two lamented.

Pimpun could not pinpoint the causes of the ongoing drought. Could it be the result of climate change? Or excess extraction of groundwater by rice farmers forced by pathetically low paddy prices to keep growing more to make ends meet? Or, as she suspected, something to do with China's mega-dams on the upstream section of the Mekong?

The 65-year-old is not alone in pointing at the dragon nation. Since China started building dams -- 11 so far with several more in the pipeline -- people living in downstream Mekong regions have been increasingly impacted. As Pimpun notes, the seasonal ebbs and flows of the Mekong, and tributaries, have become erratic and unpredictable. Water might rise and fall drastically in the same day or even turn stagnant, which is atypical of the formerly free-flowing river. Fish that used to spawn in tributaries, referred to by locals as "wombs" of the Mekong, have dwindled in number if not disappeared altogether. A similar decline happened to the kai, or river grass, a critical food source for both fish and humans. From its characteristic muddy brown hue, the Mekong has turned a vapid blue. Locals describe the river as being "hungry", suffering from "sediment starvation", much of which has been blocked upstream. Like anaemic blood, the currents have become deprived of nutrients to feed the life within and along both banks of the once mighty river. 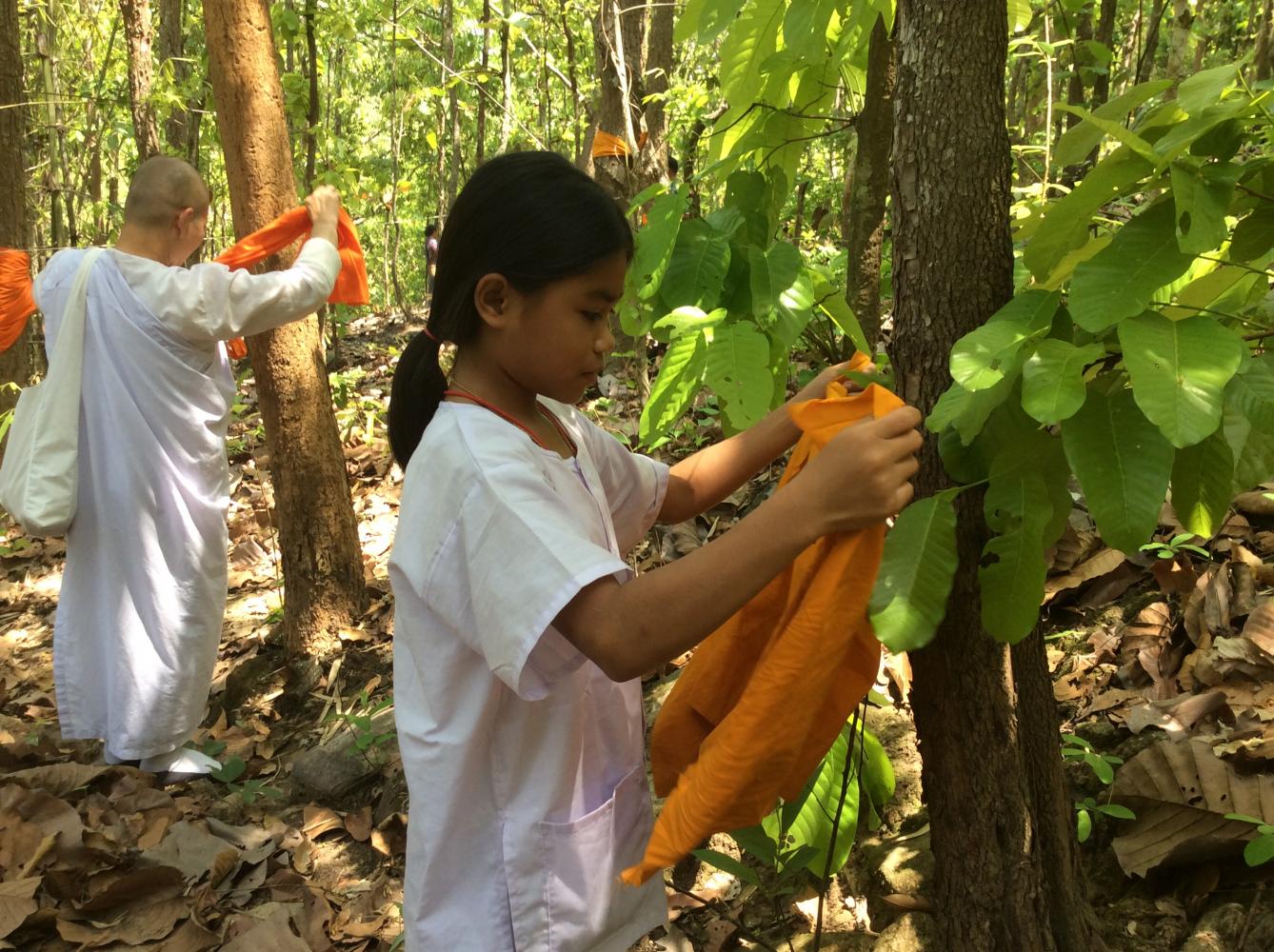 Every year, villagers participate in a ceremony to 'ordain' their forest.

A veteran environmentalist who serves as an adviser to the Boon Rueang community, Niwat Roykaew, aka Kru Tee, foresees a grim future if nothing is done.

"This wetland forest might not survive," he remarked during the UNDP's award ceremony.

For him, the cause of ecological disruption is clear -- the concrete dams. What's the solution? Niwat urged the villagers of Boon Rueang and the entire Ing Basin and beyond to look at the big picture.

"We are all parts of the Mekong," he said. "It's time we pool forces to protect 'our mae' [mother]."

How can ordinary citizens counter the tide of events when their own governments can't or don't seem to care? For 20-plus years, China has continued its dam-building spree, controlling the flow of waters at its own whim. In the lower Mekong, Laos follows suit in its relentless drive to become the "Battery of Southeast Asia", ironically with a number of dam projects in both the mainstream and tributaries, funded and built by Thai banks and companies, to sell electricity to Thailand. Meanwhile, the regional Mekong River Commission has been unable to exert much say in how to regulate and minimise the dams' impacts on the environment and people's livelihoods.

Niwat believes a crusade from below is possible. Indeed the success of Boon Rueang locals in preserving their centuries-old wetland forest might offer a blueprint for grassroots conservation movements for the entire Mekong Region.

In 2018, the Thai government, facing fierce opposition from the Boon Rueang community, backed down from a plan to use part of the 483 hectare wetland for a large-scale industrialisation programme. Such a rare accomplishment by a grassroots group was eventually recognised by the UNDP, which selected Boon Rueang from a pool of 583 nominated from over 120 countries to receive its prestigious Equator Prize.

But half-a-decade ago, the atmosphere in Pimpun's village was complete gloom.

"I couldn't sleep at all," she recalled. "I was shocked when I heard they were going to snatch our forest. I declared I wouldn't give up even half an acre!"

In 2015, a series of Special Economic Zone (SEZ) programmes to be launched across the country was announced. The Boon Rueang wetland forest, with its official "public grazing land" status since 1967, was eyed as prime real estate, attracting investors to the border town of Chiang Khong, in Chiang Rai province. 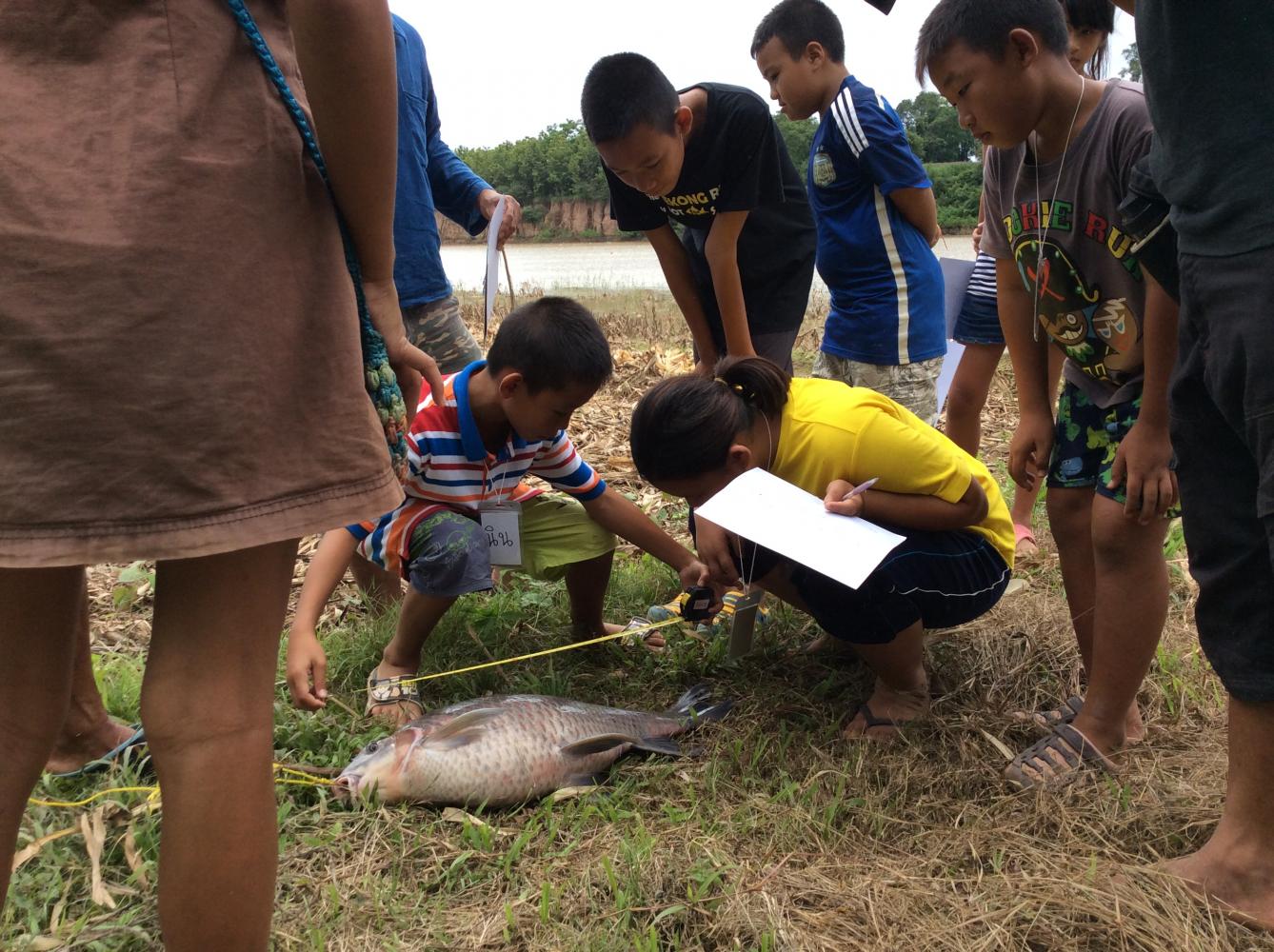 Local kids learn about ecology in their own backyard.

Little did the powers-that-be realise the seemingly gentle and complacent northerners could manifest steely resolve. Pimpun related an incident when the whole village, herself included, swarmed a handful of armed soldiers assigned to dismantle protest banners.

"When the soldiers saw how adamant we can be, they became scared and went away."

The battle against the SEZ project was not the first time the Boon Rueang folks displayed their love of and bond with their forest. Pimpun's father lost his friend and almost his own life when they fought against schemes by local influential figures to set up rice and tobacco mills in the area. Subsequent years witnessed similar tugs-of-war as a series of "development programmes" swept through the border regions, boosting land prices and speculation. Although the outer edges of the wetland forest have been gradually taken over, the core sections safeguarded by the Boon Rueang community remain mostly intact.

This wetland forest has been the villagers' "kitchen supermarket"; the bountiful free source of vegetables, fish and herbs that sustains them through good and bad times. Pimpun said her father managed to raise 10 children on a schoolteacher's salary thanks to the fish he caught in the wetland's swamps during weekends.

But it was the latest round of confrontation that revealed people's ability to tilt the balance. Pimpun said that although men appeared to take the front seat during public meetings and demonstrations, women have been working side-by-side with their male counterparts, planning strategies, fund-raising and co-ordinating with their children who work or study in big cities but who profess as much love for the forest as do the older-generation folks.

One intriguing aspect of the Boon Rueang movement, noted local Phitchayetsaphong Khurupratchamak, was how people could fight peacefully on their own turf. Despite the military regime's draconian laws limiting mass assembly, some locals with computer and social media skills swiftly set up "virtual public spaces", under the name of Boon Rueang Wetland Forest Conservation Group (BRWFCG), to share information and discuss plans. Within two hours, they raised 30,000 baht to produce the first batch of protest banners and green slogan T-shirts that became one of their trademarks.

"It was unusual that villagers like us didn't have to stage a sit-in in front of Government House or submit petitions to other state agencies," Phitchayetsaphong said. Eventually, Chiang Rai became the only province whose authorities could not secure land to serve the SEZ programmes, noted Phitchayetsaphong, who currently serves as BRWFCG's co-ordinator.

Stepping into the eye of the storm was Niwat, whom both Pimpun and Phitchayetsaphong regard highly for his wisdom and years of commitment, campaigning to protect the Mekong and its tributaries. The founder of the Love Chiang Khong Group said first and foremost, the people already have the "heart and guts" to do everything to protect their precious resources. What they lacked, he said, were strategies and tactics of mobilisation.

"People are not stupid," Niwat said. "They have the knowledge, but it has not been well organised or has been devalued. For instance, the government claimed the Boon Rueang forest was 'degraded'. Locals know it is fertile but they couldn't demonstrate systematically what types of trees exist and how many. So their views were dismissed."

Niwat introduced his networks of local allies, academics and activists. Importantly, the Boon Rueang folks joined the Ing People's Council, a coalition of communities scattered around the Ing Basin trying to push for public participation in resource management. They embarked on sharing local ecology, history and culture, on the Facebook pages of both BRWFCG and the Ing People's Council.

Thus, contrary to the authorities' surmises, the Boon Rueang folks provide an impressive list of plants, fish and other animals in the wetland forest that not only contribute to household economies but also to the carbon sink economy, to the tune of several millions of baht a year. Niwat observed how women's knowledge of edible plants foraged from the wetlands exhibits to the public the forest's tremendous value, in particular, when preparing foods that support the whole "troop".

More, the unique characteristics of this seasonally flooded wetland forest, called Pa Rim Ing (Woods by the Ing River) by the locals, has excited experts. Sutti Malithong, deputy director of the Institute of Biodiversity & Environment for Local and ASEAN Development, Chiang Rai Rajabhat University, said the Boon Rueang forest features rare species of trees and other plants that have yet to be included in the body of knowledge on wetlands. There is a lot of promise for future research in this field, he proposed.

Indeed, the Boon Rueang achievement could save other wetland forests. Niwat's long-time associate, Somkiat Khuenchiangsa of the Living River Association, has been pushing for the protection of all wetland forests in the Ing Basin under Ramsar Site status. If granted, locals would be able to continue harvesting resources for their livelihoods, but not for large-scale commercial operations, whereas industrial projects like SEZs would be forever banned. So far, five wetland forests, including Boon Rueang, have been included in a Ramsar Site application.

But the ultimate survival of the wetland forest requires an even bigger step.

Exhibition places trauma of current events in the spotlight