published : 26 Jul 2021 at 06:07
newspaper section: Life
writer: Thana Boonlert
A week after getting approval from the FDA, antigen test kits for home use are being sold for 350 baht each at a drug store at the Chokchai 4 Market. Thana Boonlert

Earlier this month, people camped out for free coronavirus tests only to be turned away. By 8pm, early birds had already started to line up in front of a temple for testing the next morning. When the rain poured down, a security guard let them take refuge inside while others were cocooned in their tents or slept on mattresses in the open.

Yutasarn Tannok was one of those who hoped to get a ticket, which were handed out at dawn on a first-come, first-served basis. The free testing could only accept 900 walk-ins per day for a week. He wanted to be tested because his colleague had tested for Covid-19. However, he was too late and, like others, was turned away.

The government came under fire for its mismanagement after such scenes went viral on social media. Soon after, officials approved the use of antigen test kits in hospitals and mobile screening units and by July 16, the Food and Drug Administration (FDA) had given the green light for the sale of over-the-counter antigen test kits for home use to reduce long queues for RT-PCR testing

Amid the third wave of the outbreak, the public health system is near collapse. Patients are being found dead at home or on the streets. However, self-testing will allow people to become aware of their status and receive early treatment. In light of this, Life spoke to experts who have stressed that testing must be expanded and integrated into the home isolation system. 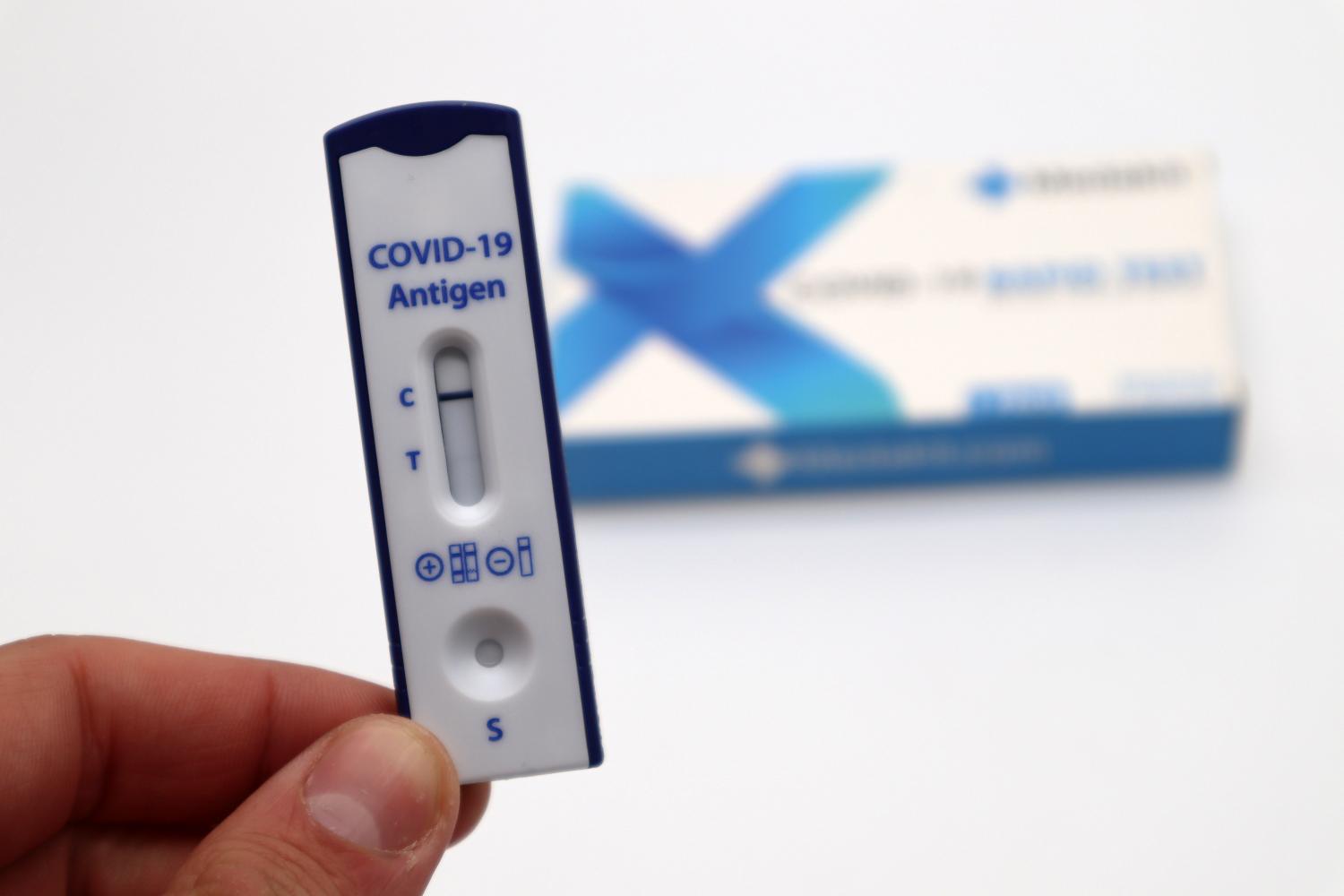 Assoc Prof Jessada Denduangboripant, a lecturer at Chulalongkorn University's Faculty of Science, said self-testing is better than not testing at all or self-monitoring for symptoms because most people are asymptomatic. However, users must be careful about false positives. Those who test positive should reconfirm their status with an RT-PCR test in hospitals and labs. Similarly, those who test negative but are at risk of infection must self-test again three or four days later when the level of the virus is higher and can be detected.

"You might test negative but you should assume that you can be positive anytime. Even if you test positive (false-negative result), the process will help screen out those who are actually infected," he said.

Last week, the FDA approved the registration of five antigen test kits for home use. They are currently being sold at around 250 baht per piece. However, those at high risk should contact local clinics and hospitals for free rapid testing. The National Health Security Office (NHSO) also approved the purchase of over 8.5 million home-test kits at a cost of around one billion baht to be given to Thais and migrant workers next month.

However, the government must take more actions to expand access to self-test kits because though they are less sensitive, they are cheaper and more readily available than RT-PCR tests. The FDA and the NHSO said they will likely fix the price of the kits at 100 baht apiece to ensure affordability and prices will go down when more supply hits the market.

"Provincial and local administrations should spend their budget on self-testing rather than spraying disinfectants. The mass testing at Talad Thai is a very good model to follow as visitors are screened for free. If the government subsidises this scheme, it will increase accessibility," Jessada said.

Vulnerable groups will benefit from free coronavirus testing. He added that the rate of screening in migrant workers will be increased because companies can now afford tests. In the past, they offered very limited testing due to high costs, which led to the emergence of clusters of infections.

He stressed that the Centre for Covid-19 Situation Administration (CCSA) must implement self-testing and home isolation plan nationwide because officials are using this method to ease the burden of RT-PCR testing. The hospitalisation of asymptomatic and mild patients has overstretched the public health system.

"In foreign countries, they are being treated at home. We must get used to home isolation. Moreover, the requirement that providers of RT-PCR tests must admit positive cases should be scrapped," he added. 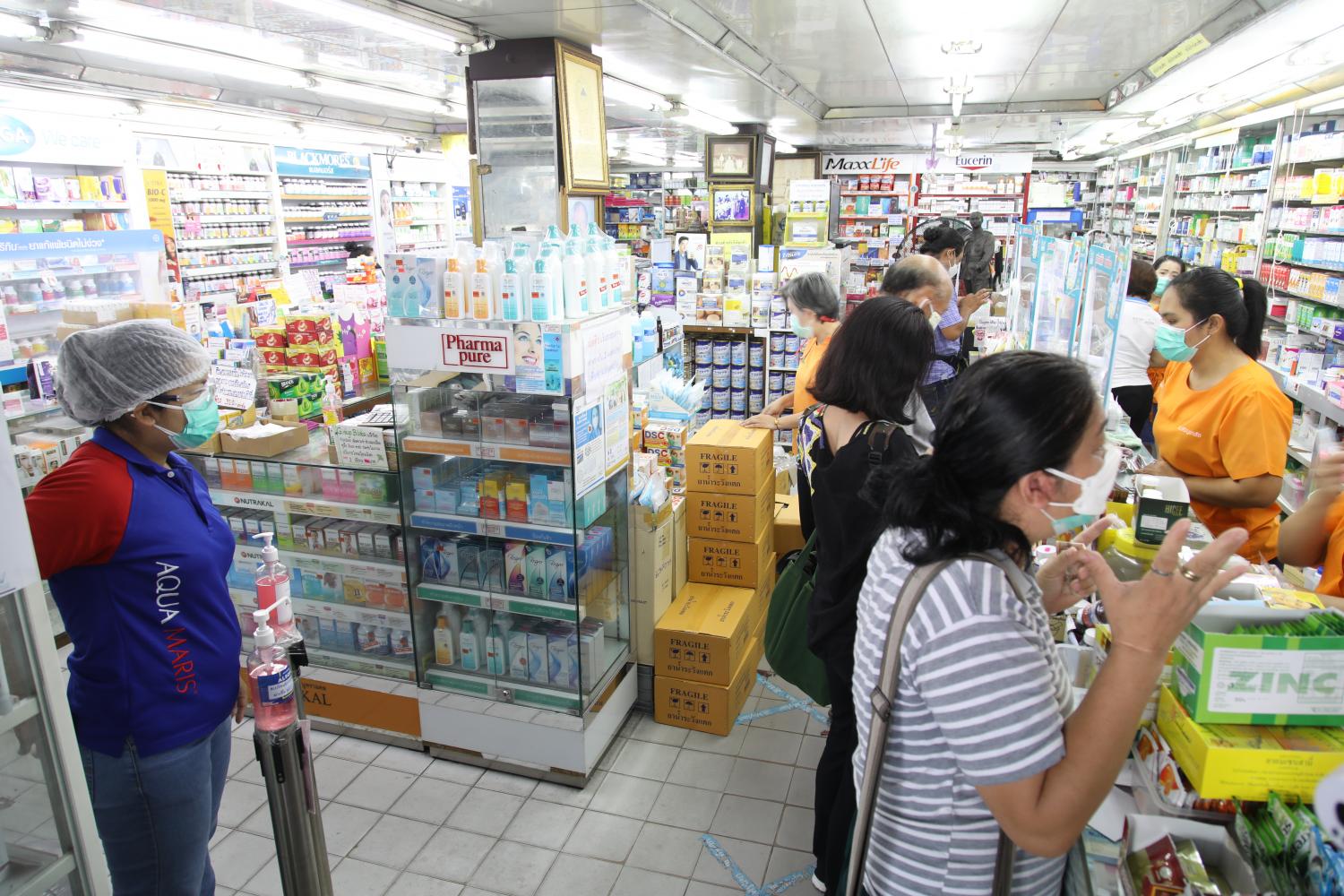 Shoppers at a drug store in Bangkok's Saphan Mai are buying medication and Covid-19 self-test kits.

Giving them for free

Last week, only a few drug stores were selling these highly-sought items and they ran out very fast. Teerapong Mongkolwatanalila, president of the Thai Pharmacies Association, said most drug stores have not received any products for over-the-counter sale. The current price is too high compared to costs in other places such as 40 baht in China, 150 baht in Singapore, and 260 baht in the US. It should be capped at 200 baht.

"In fact, they should be handed out for free because people are financially suffering from the pandemic. It is a huge burden. The government has borrowed money to resolve the coronavirus crisis so it should be able to subsidise this scheme," he said.

He said self-testing must be linked to home and community isolations. Those who test positive should be better informed of the guidelines otherwise, when they get worse, they will be left to themselves.

"People are suffocating and calling me in the early hours because hospitals are not taking their calls. I am desperate to help them. Meanwhile, health workers are struggling to cope with patients with moderate and critical symptoms. The government must overhaul the plan," he said.

In need of further support

Asst Prof Dr Jiraporn Arunakul, an adolescent specialist at Mahidol University's Faculty of Medicine, Ramathibodi Hospital, said this kind of treatment is normal practice for patients but it has never been properly addressed. In the public's imagination, patients are dying at home if they don't go to the hospital. Earlier this month, she caught the coronavirus from medical personnel even though she was fully masked and vaccinated. After one week of home isolation, she had a fever and the fear of things getting worse is the most difficult experience.

"While I can seek advice from medical colleagues, others are not afforded these opportunities. That is why doctors must be on call with patients to alleviate their anxiety during home isolation. I think we must assure them that they will be cared for at home," she said.

She said communities should come up with their own support system for home isolation. For example, they can find volunteers to pick up food from riders downstairs for those who are being treated in their condos. However, the government must work harder to ensure that people have access to the public health system -- be it home isolation, vaccination, or financial relief during lockdown -- because many people must go out to make ends meet.

"It is useless if there are not enough effective vaccines because by staying at home, people can spread the virus to family members," she said.