Once again, those waiting on news of marriage equality in Thailand were met with disappointment. Let's talk about Section 1448 of the Civil and Commercial Code first. It states that only a man and a woman over 17 are allowed to be legally married. This month, this law went to the Constitutional Court, where it was to be decided whether it was unconstitutional.

And it was concluded that this law, which only recognises heterosexual relationships, isn't against the Thai constitution. The only consolation was the ruling also said that parliament, cabinet and related government agencies should concoct a law to recognise the rights of LGBTI. So, possibly, the prospect of same-sex marriage in Thailand may manifest into a separate law or something along the line of a civil partnership bill. However, it won't be "marriage", at least not in the same sense that heterosexual marriage has been recognised.

Thai LGBTIs might be getting something at last and although it's better than nothing -- especially more than what people have now -- it is not equality. It's a shame the Constitutional Court made this decision. But, honestly, not many are actually surprised by it. For some reason, a same-sex relationship can't be accepted in the same way and at the same level as legal recognition of a heterosexual relationship in this country. What is preventing policymakers from taking marriage equality all the way?

Back in 2017, the Constitutional Court of Taiwan ruled its existing marriage law was unconstitutional. People should be entitled to equality and freedom of marriage. This ruling paved the way for the eventual legalisation of same-sex marriage in 2019, making Taiwan the first country in Asia to do so.

We know now the Thai court is not going to follow this same path. And so people are waiting to see what we will eventually end up with.

THE MONTH OF VIOLENCE

Earlier this month, there were reports that a 17-year-old trans woman was kicked in the face by a drunk policeman in Chon Buri. He apparently said "I don't like katoey" before attacking the said trans woman. The policeman was moved out of his jurisdiction and his gun was seized while awaiting a verdict.

Last week, a video clip featuring another trans woman in a fistfight with a man who verbally abused and insulted her went viral on Thai social media. She won the fight and the guy was left with bruises and a bloodied nose.

Also last week, activist Nada Chaiyajit reported that yet another trans woman was attacked by her ex's girlfriend, with the help of the former boyfriend as well. The trans woman, named Buay, was hit with a metal rod and required stitches on her skull. The reason behind the attack was not disclosed. From Nada's description, the police were also not active in finding the perpetrator until someone said they would put the story online. The activist said she'll be in the area of the attack soon to monitor the police's work and make sure the victim gets justice. Of course, these incidents all happened in the same month as Transgender Day of Remembrance, observed on Nov 20 annually in memory of murdered victims of transphobia. In Thailand, violence still revolves around name-calling, fighting and other forms of discrimination, but rarely has there been a case of murder. However, in the US, it is reported that 2021 has been the deadliest year (on record) for transgender and non-binary people. There have been close to 50 trans homicide victims this year, most of them black and Latino. Due to crimes against transgender people being misreported, there is speculation that this number is likely undercounted.

In this day and age, gender-based violence is still a real threat to the lives and livelihood of transgender people everywhere. And while we may see improvements in some areas over the years, like an increase in onscreen representation and inclusion in sports, it doesn't seem to change the situation and transgenders still remain the object of hatred and violence. Their safety to simply be themselves is a concern.

What will it take for transphobia to end?

WE CAN BE HEROES

Hollywood has long convinced the world that only a certain group of people can be superheroes. For decades, the big screen was monopolised by throngs of cisgender, heterosexual white men donning the cape, mask, spandex, flying suit or other heroic outfits. Female superheroes were initially rare, but at least the amount has grown since the day of Lynda Carter's Wonder Woman in the 1970s. But LGBTI superheroes, on the other hand, were practically non-existent (at least on the big screen) until now.

In Marvel Studios' latest superhero ensemble Eternals, audiences are finally graced with the presence of a gay superhero. And it's not something that may just be implied or suggested in passing conversations or innuendos. No. This gay superhero is fully-fledged and completely out. Phastos (played by Brian Tyree Henry) is among the beings called Eternal who have settled on Earth for eons. After years of living separately, the Eternals team up when extraterrestrial threats arrive. In the present day, it is revealed that Phastos is married to a man and they are raising a son together. And did we mention a gay kiss yet? Based on the stuff that Disney/Marvel have done in the past regarding LGBTI representation (which wasn't much), this is a pretty big leap. The movie, in a way, has redefined the concept of superheroes. Superpower comes in all shapes, sizes, gender and bodies, and Eternals has offered us potentially the most diverse and inclusive cast of superheroes to date. 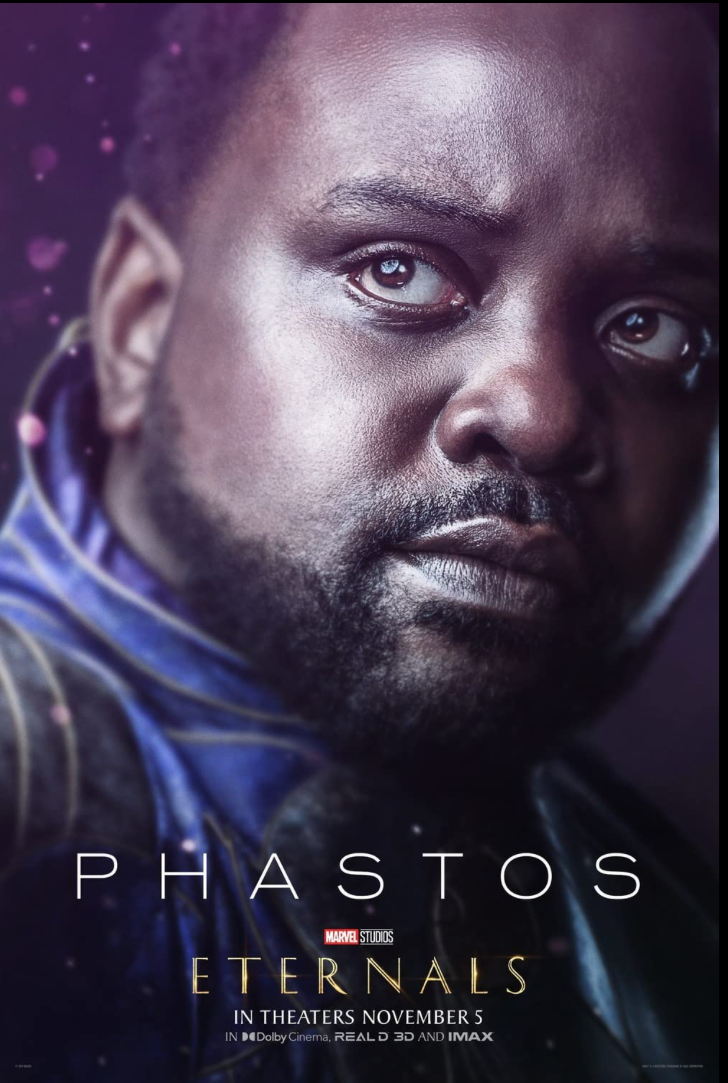 Not everyone applauded the idea though and, unsurprisingly, the movie was banned in several countries for its depiction of a same-sex relationship. But kudos to Disney/Marvel for sticking with its own material and not removing gay-related scenes in order to make extra money in those markets. Superheroes don't have to be straight. Gay people can be heroes too. The studios are sending a strong message and we hope they'll continue to move forward in this direction.