After new ministerial regulations were implemented last year, the leaves, stalks, stems and roots of the cannabis plant are no longer categorised as a narcotic and can be used as an ingredient to make medicine, health products, food and cosmetics. With this legal change, entrepreneurs now have opportunities to launch cannabis products.

"Due to the Covid-19 pandemic, people have become depressed. Although ganja or cannabis can relieve stress, not many organisations inform the public about cannabis-infused food products. So, we thought it would be beneficial to inform the public how to use cannabis as an ingredient in food and beverages properly," said Lerchart.

"At TCDC Commons Seacon Square, we focus on content about food. 'Ganja Appetit' informs visitors about the legalisation of cannabis in Thailand, how to make cannabis-infused food products, and the first steps entrepreneurs have to know," Lerchart added. 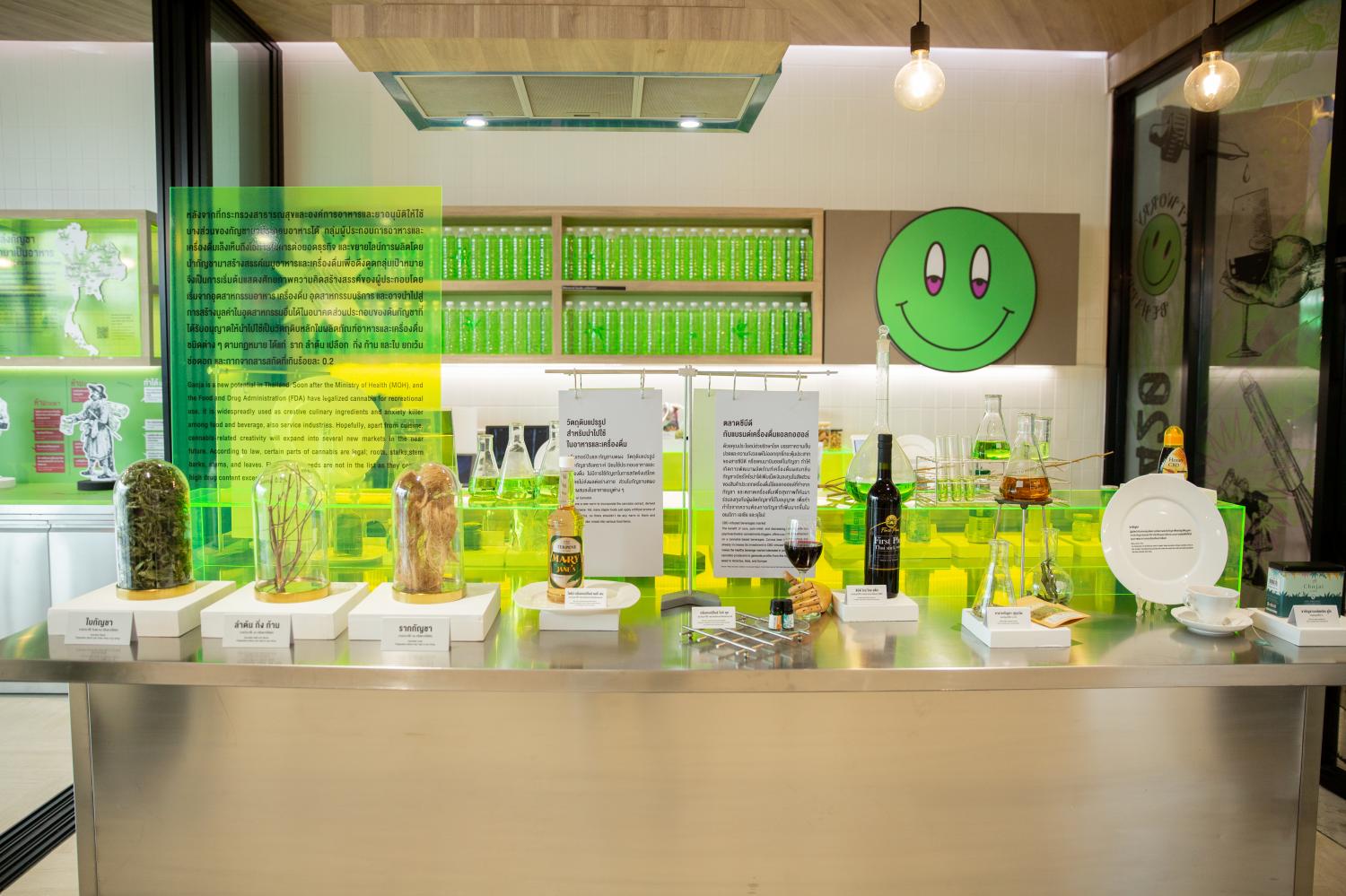 On view now on the 3rd floor of Seacon Square, "Ganja Appetit" is divided into three sections -- Journey Of Cannabis, Ganja Anatomy and It's Bigger Than A Plate With Ganja. The first section, Journey Of Cannabis, takes visitors back 8,000 years when the plant was easily found in many regions. Visitors can explore the history of cannabis and its role in food culture and social movement.

Ampa Noisri, the content creator of the exhibition, said that before cannabis was controlled by laws in the US, hippies promoted the recreational use of several drugs, including cannabis.

"Hippies used cannabis and other drugs. They supported freedom and opposed the government. In order to control cannabis, President Richard Nixon decided to launch the Marijuana Tax Act of 1937. People had to smuggle weed and this led to the first black market or a deal between MIT and Stanford students through a network known as Advanced Research Projects Agency Network (ARPANET). They purchased weed via ARPANET," said Ampa.

Since pre-historical times, people added cannabis into food for better taste. Science has proven that cannabis contains glutamic which has glutamate or salty acid that can enhance the taste of food.

"During the reign of King Rama V (1868-1910), Lady Plein Passakorawongse, the owner of Mae Krua Hua Pa, possibly Thailand's first cookbook with a cannabis dish), recommended using three to four cannabis leaves as an ingredient in the Thai dish, 'Eel Curry'. This is the only recipe on record that includes cannabis leaves as a food ingredient. Other recipes that claim to include cannabis are from word of mouth," said Ampa.

In Thailand, cannabis was listed as a type 5 narcotic under the Narcotics Act in 1979 which prohibited people to consume, possess, sell, import and export the plant. Before the Narcotics Act was created, people who used cannabis would express their experiences through their music and artworks.

"Between 1938 to 1964, Kamron Sambunnanont, a country singer, launched a song, Kratong Ganja or Kratom Ganja which described how cannabis gave him pleasure," Ampa said. 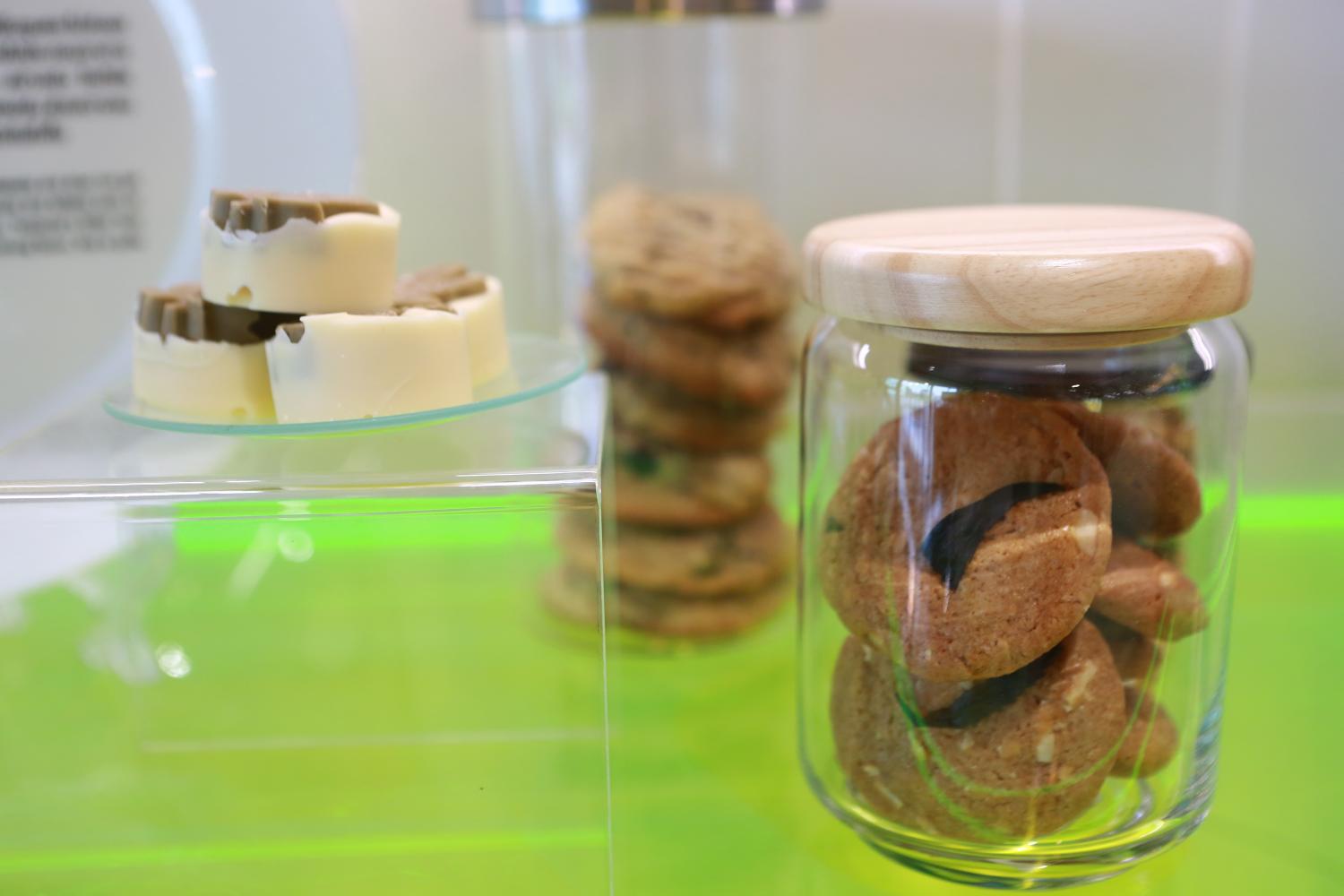 "CBD is used for relaxing and reducing stress but THC helps to reduce pain. In China, cannabis was used during surgeries which meant using cannabis with high THC concentrations," said Ampa.

Since flowers and seeds of the cannabis plant are still classified as a narcotic, the TCDC team had to undergo a complicated process before receiving permission to display the plant at Seacon Square.

"We must prove that Foi Thong Phu Pha Yon was grown legally. The plant was developed and grown by Rajamangala University of Technology Phra Nakhon. Permission was granted from the Food And Drug Administration to display the plant in Seacon Square for more than a month. After the process, we understood that it must be difficult for entrepreneurs to go through the legal steps involved in order to make cannabis edibles," said Ampa. 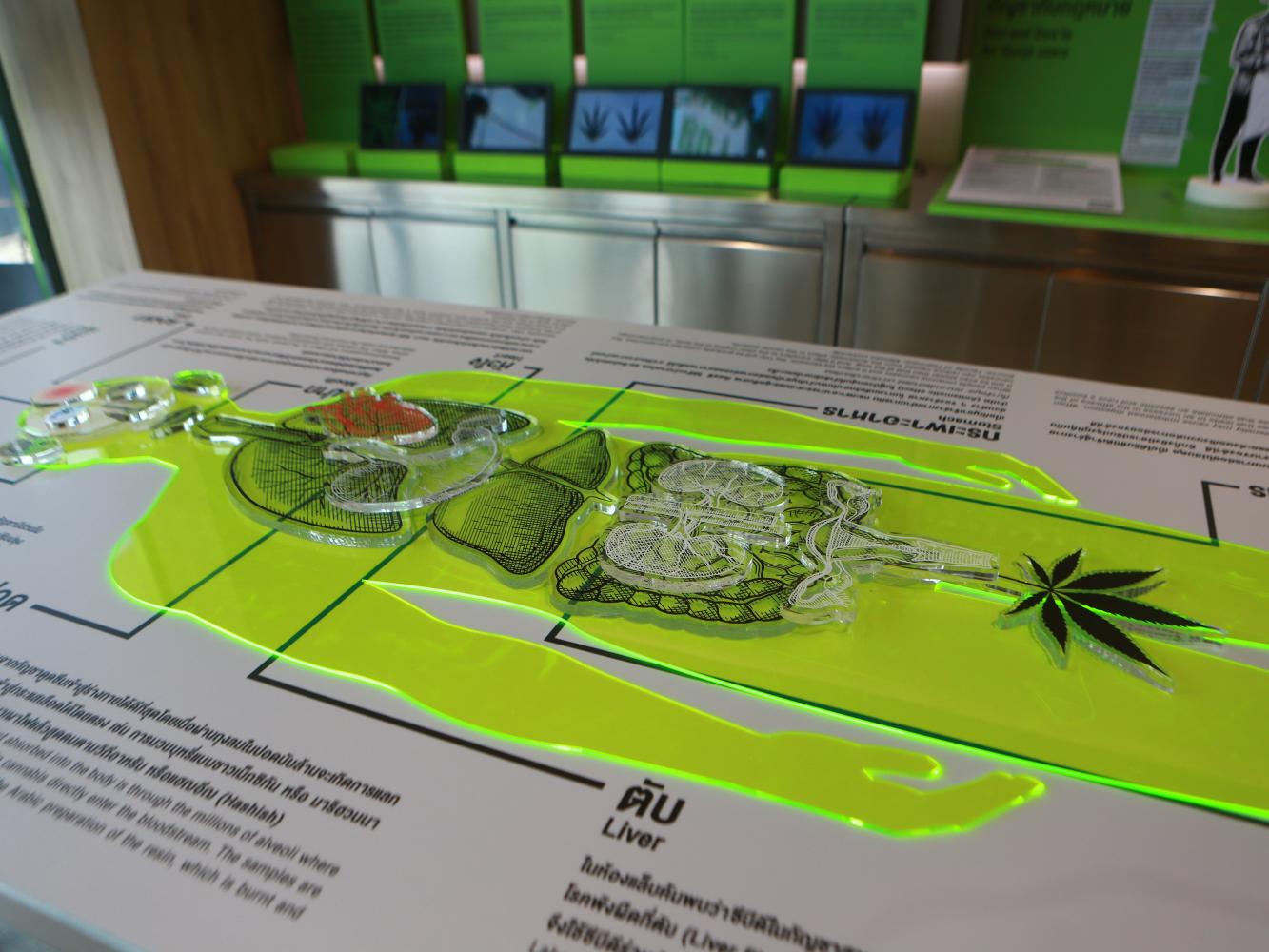 The final section, "It's Bigger Than A Plate With Ganja", displays several cannabis edibles such as jelly, ice cream, sun-dried bananas, cookies, grilled fish chill paste and fermented fish sauce. The Director of the Creative Knowledge Department, Lerchart, commented that entrepreneurs are still experimenting in producing various cannabis edibles. Most entrepreneurs added cannabis as gimmicks and not as main ingredients, so most brands are small and mid-size enterprises (SMEs). There is no manufacturer yet.

"Snacks are popular cannabis edibles, but beverages are a possible product that may do well in the future. To consume cannabis edibles safely, the FDA stipulates consumption of not more than five cannabis leaves per day or not exceeding the amount regulated on the label. Before purchasing cannabis edibles, consumers should ensure that the products are legal. Consumers can ask for certified reference material," said Ampa.

Even though the use of cannabis for medicinal and research purposes has been legalised, people cannot grow the plants in their backyards because the flowers and seeds are still listed as a narcotic. Many people are not happy about it, but Lerchart said people should focus on the opportunity that they have at hand. 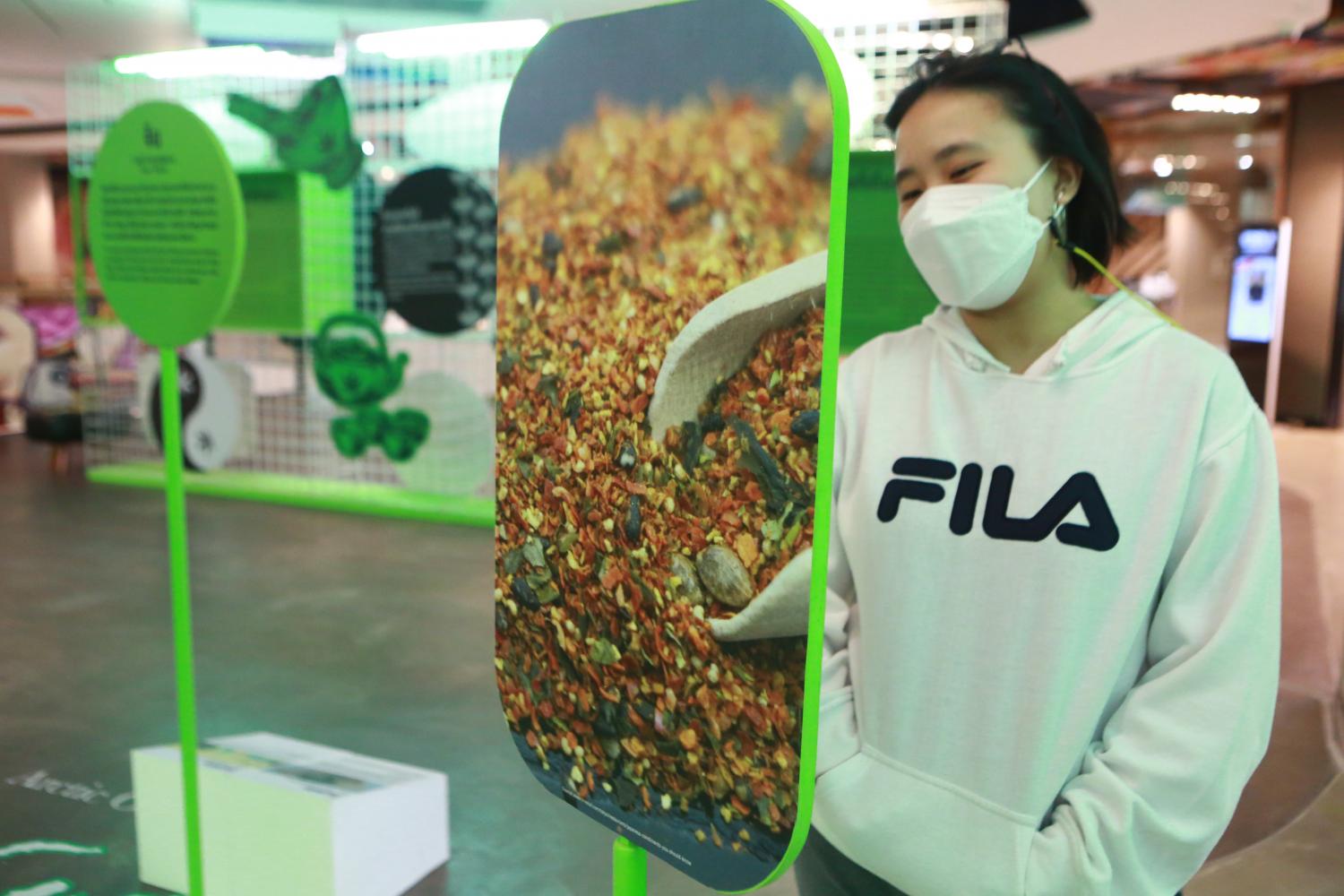 Journey Of Cannabis takes visitors back 8,000 years to explore the history of cannabis.

"People should understand the boundaries. The law has restrictions for people's safety. There is room for creativity and people can still experiment making cannabis edibles. They may find the right product to market to consumers earlier than others," said Lerchart.

Besides the exhibition, a workshop titled "Ganja Bake & Brew By Highland Café" was organised earlier this month by Rattapon Sanrak, founder of facebook.com/legalizethailand. Pamuk Yukong, the Service Manager of TCDC Commons Seacon Square, explained that the workshop saw by 15 people provide information about cannabis edibles.

"Rattapon talked about his inspiration behind cannabis edibles businesses, how to find and use cannabis legally and how to develop creative menus," said Pamuk.

Lerchart believes that edibles have the potential to grow in the cannabis industry.

"Cannabis has both negative and positive effects. People must use it right. I believe that cannabis products will do well because people are depressed and they need something to heal them. Many people have insomnia and stress. If they consume cannabis edibles and feel better, the edible can become a business. In some countries, people put CBD oil under their tongues or add it to their drinks to help them feel relaxed. This can become a new selling point or a new product in the future," concluded Lerchart. 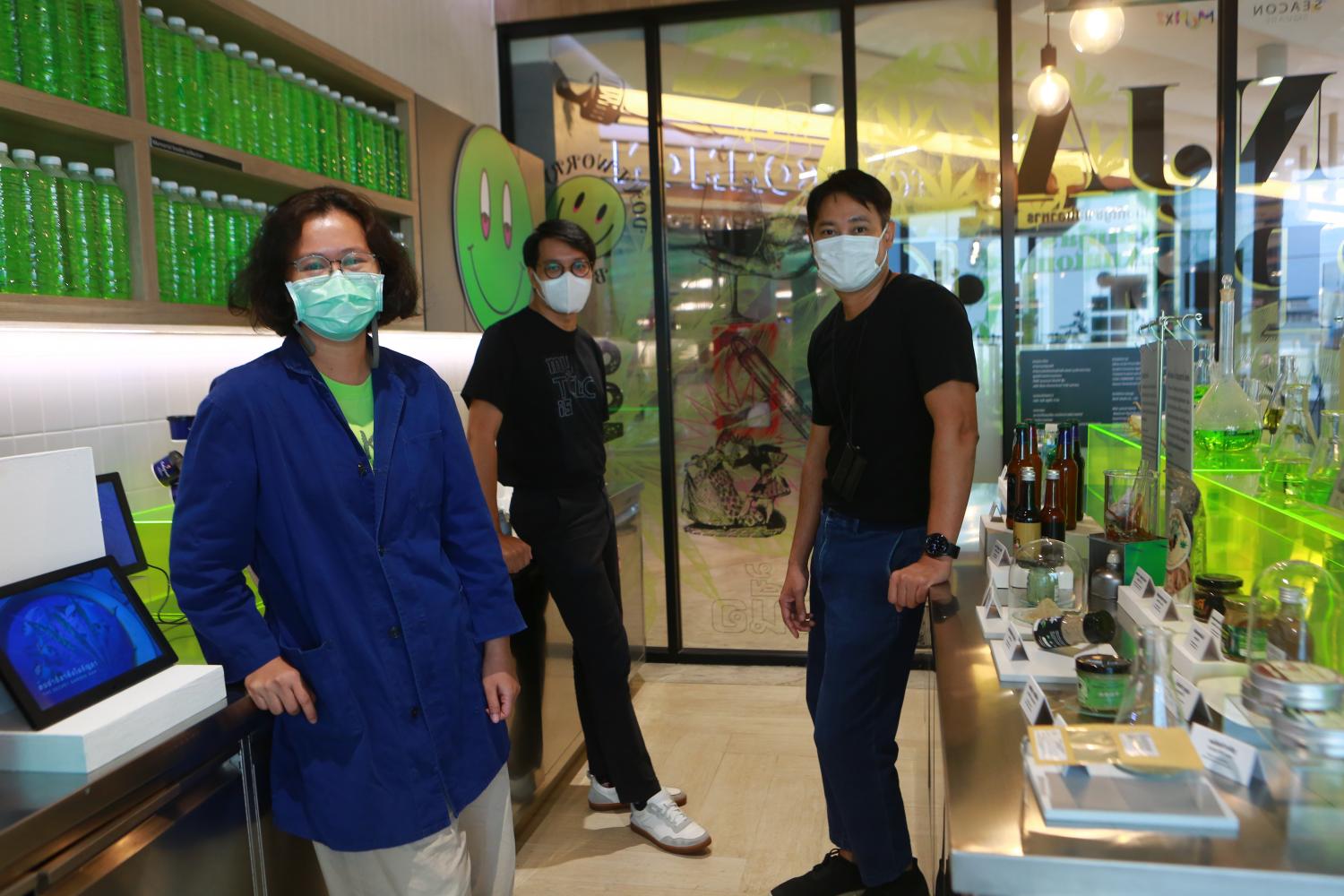 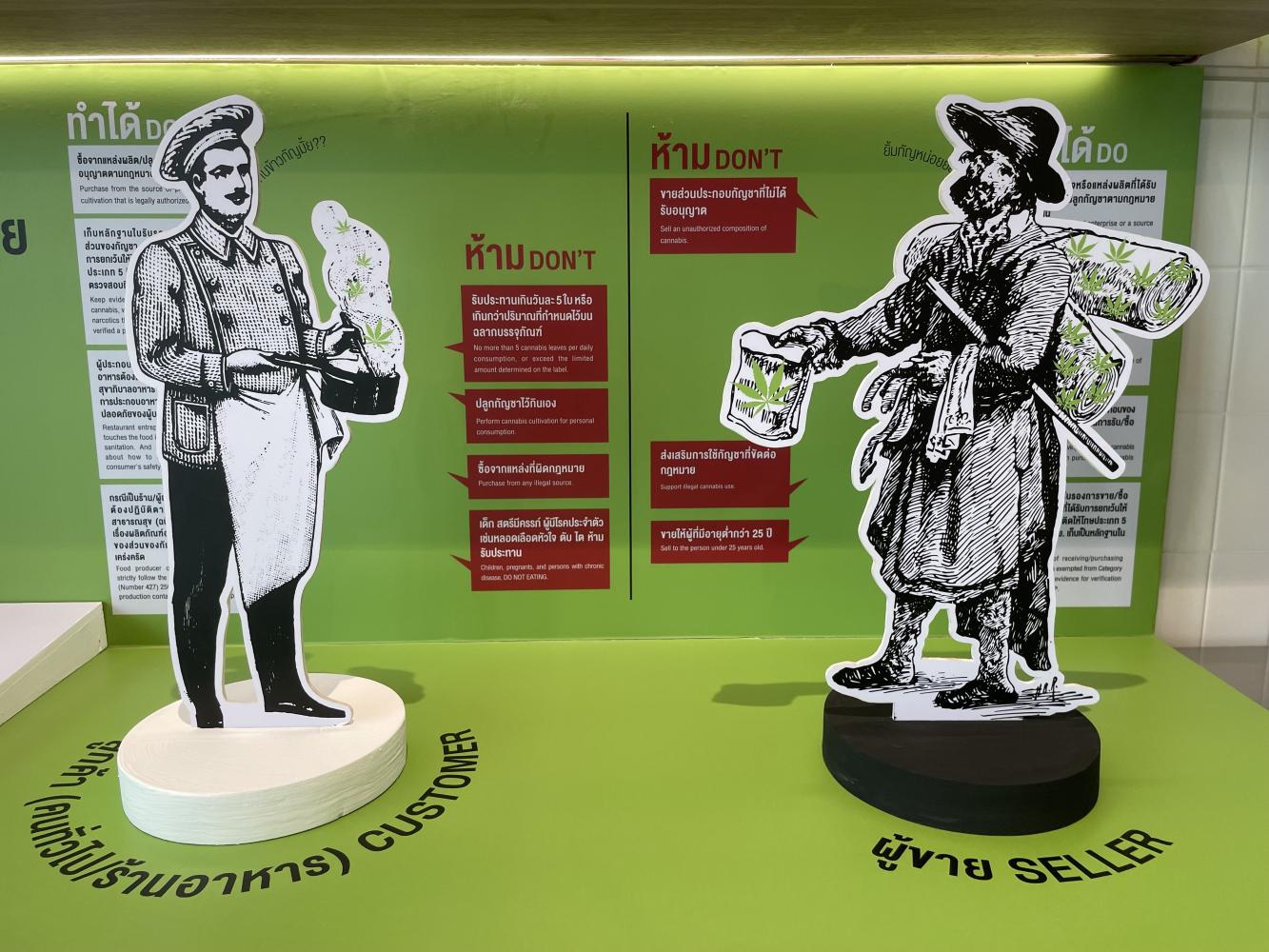 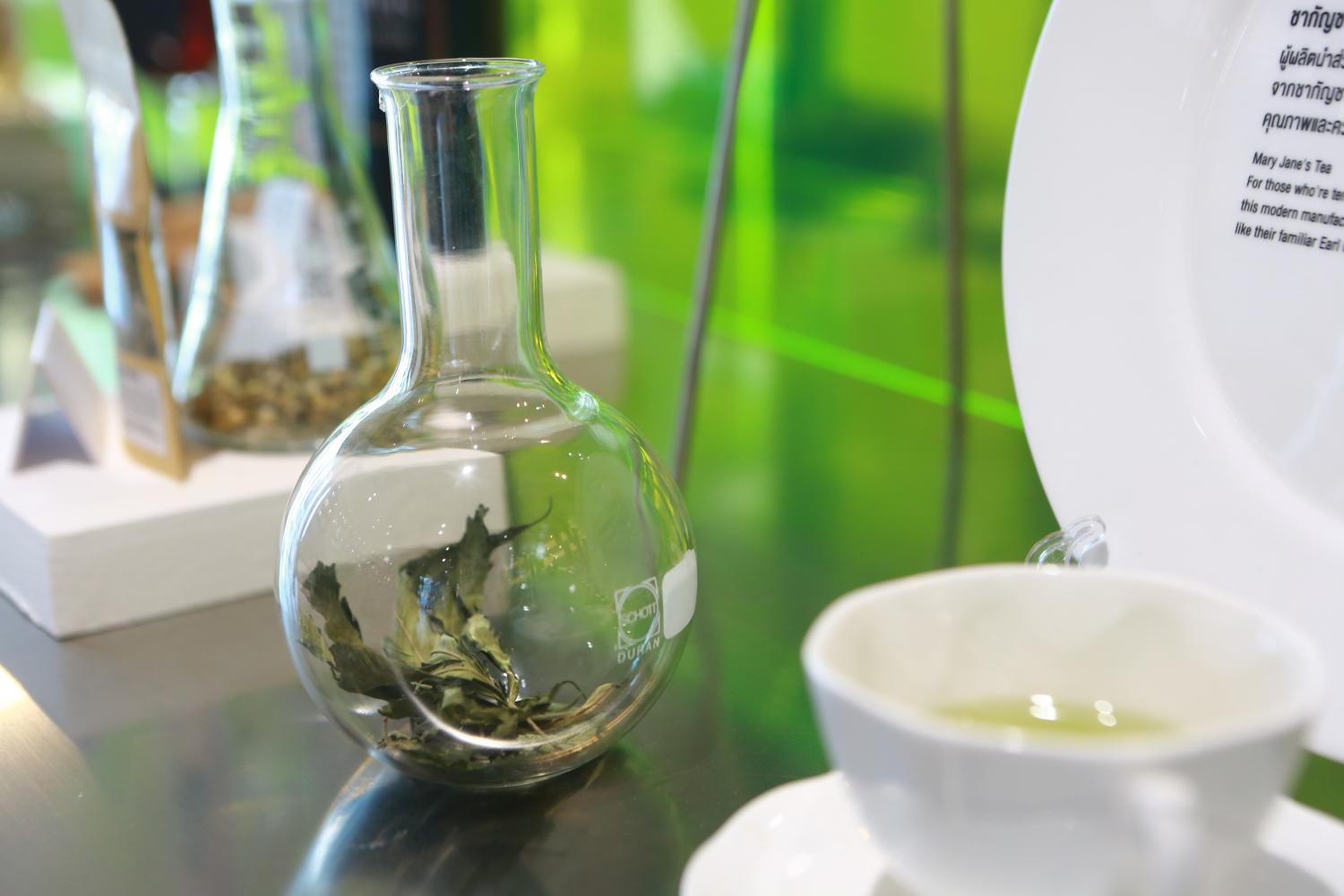 Cannabis beverages may do well in the future.