Artists try to show the way

The Thailand Biennale, 2021 Korat examines the fragile relationship between man and nature, old and new

Last spring, thousands of butterflies fluttered yellow-green wings over the mud fields in Nakhon Ratchasima. The massive outbreak of these chartreuse creatures, though a common sight in the summer, made headlines after officials said the lush forest had nourished and multiplied caterpillars at an unprecedented scale.

Nature began to recover when the coronavirus pandemic brought human activities to a standstill. Despite being hampered by lockdowns, international and local artists explored local resources that went largely unnoticed in this northeastern province, offering antidotes to disruptive changes on all levels.

"It is well known that butterflies paddle on the mud to detoxify and rehydrate. Similarly, we are trying to figure out what is going on around us now and what we can do in the uncertain future," said Yuko Hasegawa, the artistic director of Thailand Biennale, 2021 Korat, in a press preview in late December.

"It expresses our miserable but courageous state. It indicates the capital of hope that emerges from the midst of anxiety and uncertainty." 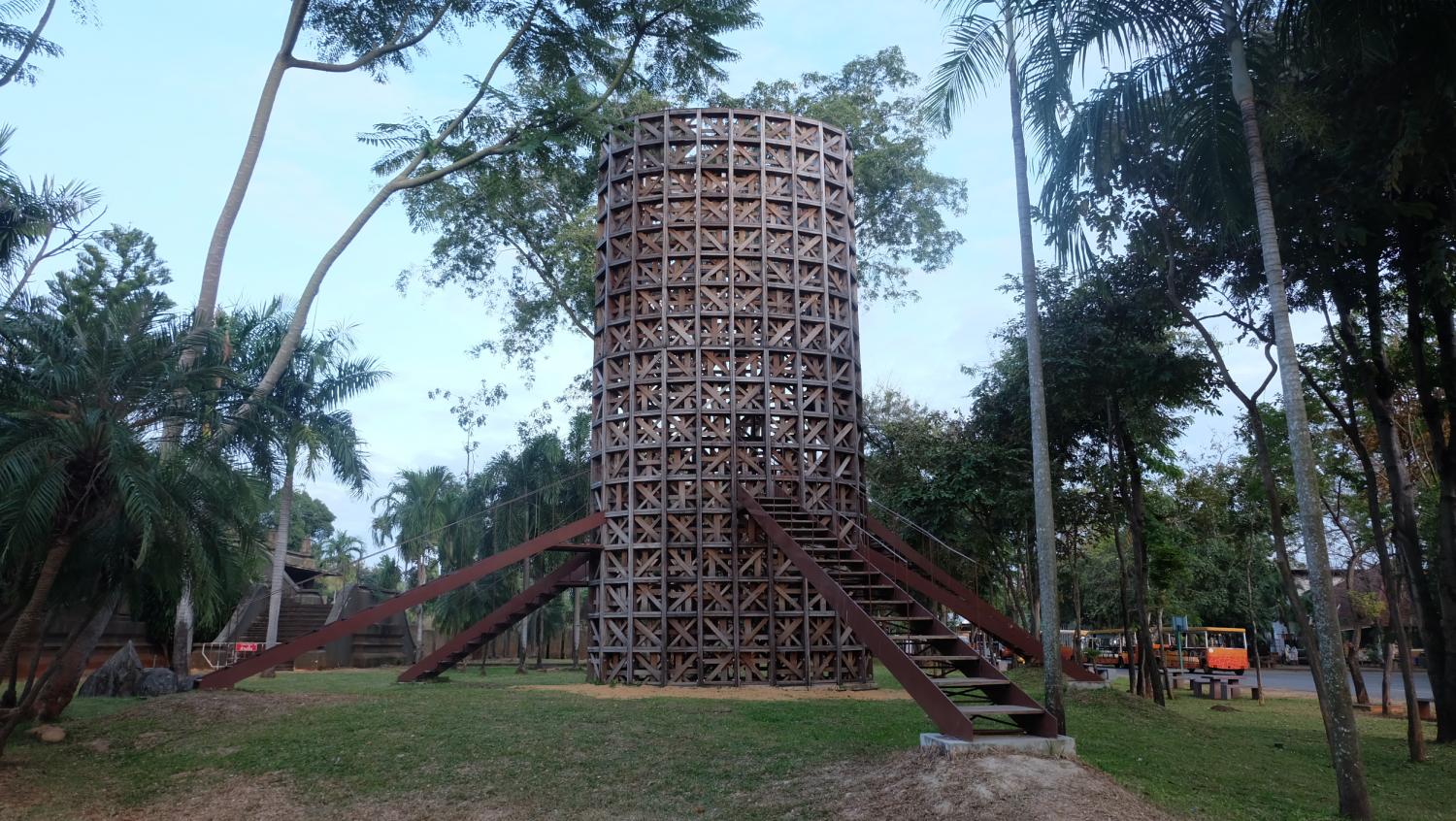 Held under the theme of "Butterflies Frolicking On The Mud: Engendering Sensible Capital", the international biennale features 53 artists from 25 countries, covering three iconic venues, namely Pak Chong, Phimai and Mueang districts, from now until March 31, following its debut in Krabi in 2018.

"We organised the biennale in Korat to search for its capital," said Kasorn Kamnerdpetch, deputy director of the Office of Contemporary Art and Culture (OCAC), under the Ministry of Culture, which organises each edition in different cities. "We have chosen Korat for a potential creative city in line with the government policy on creative economy."

Placed at Rajamangala University of Technology Isan, this group of art installations explores uncertainties in our time, especially the coronavirus pandemic, which leave us all in the unknown. It is none other than American-Japanese artist Nile Koetting who reactivated the experience of waiting in his performative installation titled Reset Moments.

Inspired by flight cancellations due to the coronavirus, he toys with the idea of passing the time and finding purpose, if there is any, in an unpredictable situation. With his background in theatre and scenography, he created a scenario where three passengers, clad in face masks and pastel clothes, are stuck in an airport lounge due to flight delays. Still, they sleep, stretch and move around in search of comfort. Background music alternates with announcements that flights would be postponed for thousands of years. On the left side of his installation is a fridge-like device that generates drinking water from ambient air to rehydrate performers and visitors. 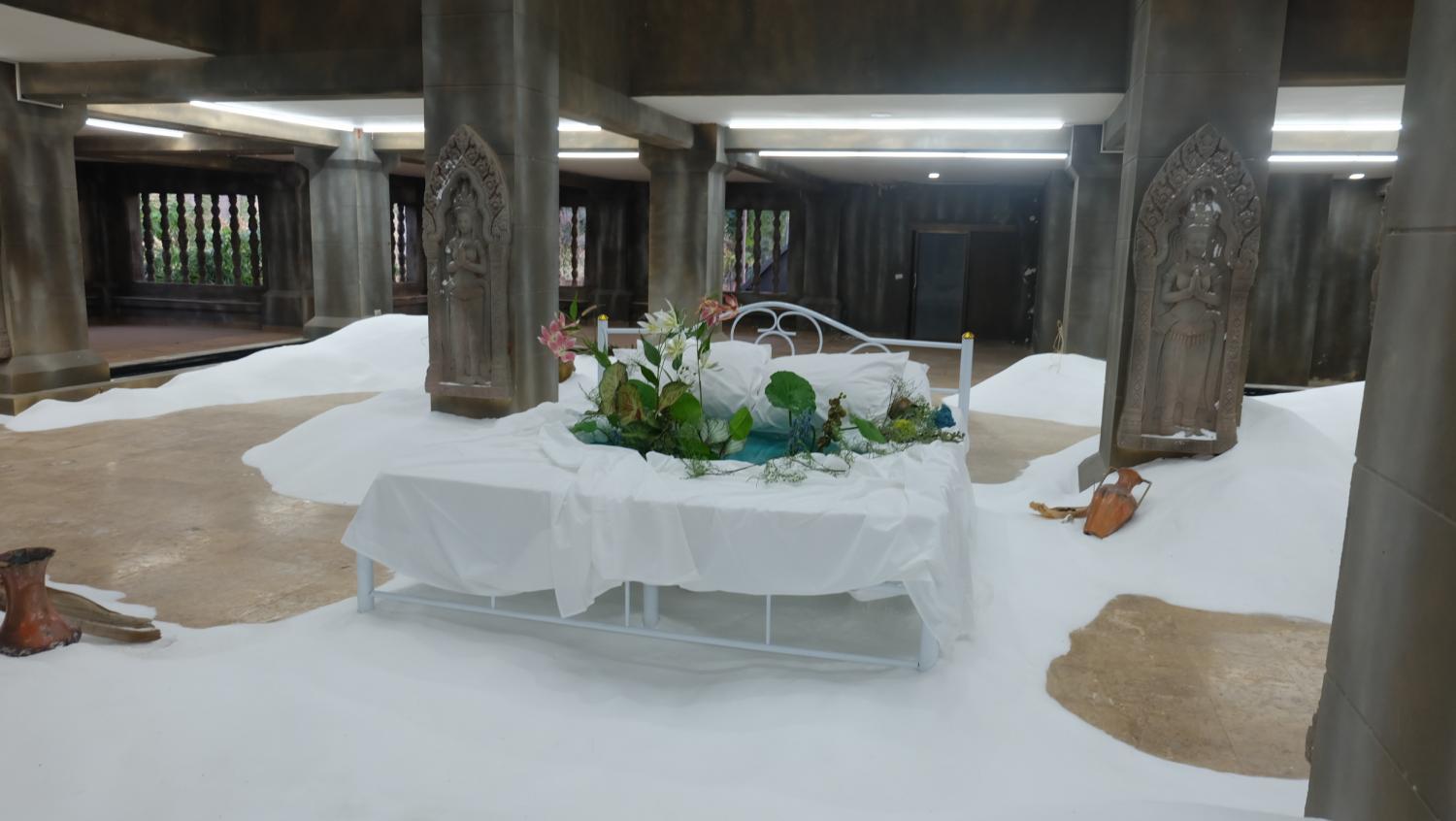 "They are waiting for the flight that never materialises like Beckett's Waiting For Godot, but in our time. I am also interested in his idea of absurdity. Since Covid hit us, we are living inside absurdity itself," he said. "It is almost like finding how you can make your environment comfortable, but not knowing what is going to happen next. It is kind of extended space and body."

Refreshed by the performative installation, guests can explore their fragile home in new media art like documentaries and simulation games. Austrian artist Herwig Scherabon, for example, captures ecological change from his field trip to the island of La Palma in the Atlantic Ocean in the installation Not Really Now Not Anymore. In the centre is a terrarium which visitors can scan to see the piece in augmented reality on smartphones.

Visitors also buzzed around a soothing interactive game. Invented by Irish artist David O'Reilly, Everything is a simulation where players can assume the role of any object in the universe from stones and animals to galaxies and beyond, not to complete any mission, but to explore the interconnectedness of beings. It is narrated by the philosophy of Alan Watts, who popularised Buddhism and Eastern thoughts in the West.

Large pieces are dotted here and there around the campus. Hidden inside an outdoor seminar hall, the garland installation Fragments Of Time questions the future of urban development in the wake of the global pandemic and natural disaster. Meanwhile, sculptures are placed in the middle of a pond. Prasit Wichaya drew inspiration from the lore of Nakhon Ratchasima compiled by Prince Damrong Rajanubhab to create lion, cat and human statues made of terracotta and resin, hinting at the richness of bygone days. 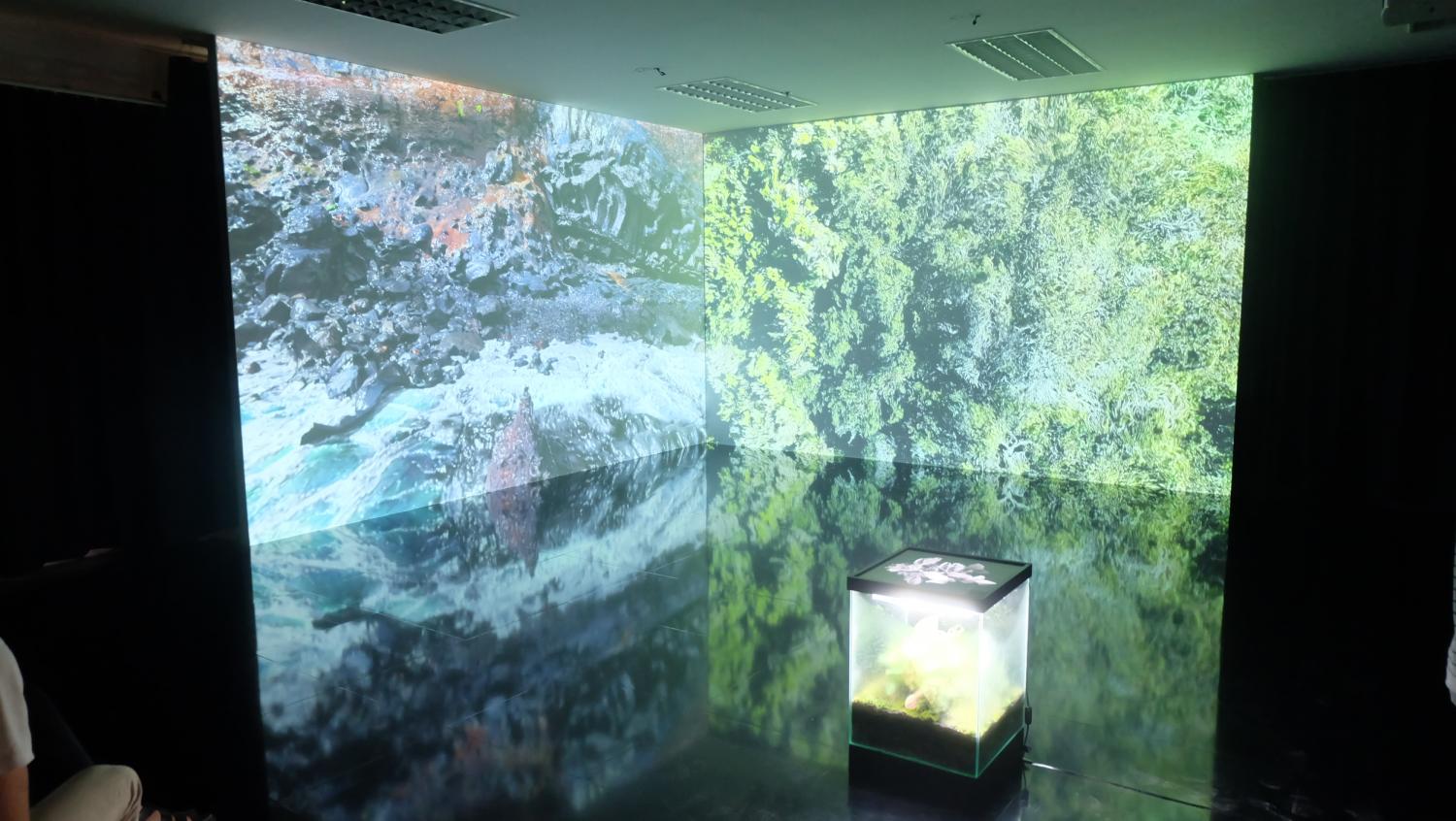 Herwig Scherabon conveys the experience of ecological change in video format and a terrarium. Thana Boonlert

While the past can be traced everywhere, its tangibility resonates in an archive. Located near the Mun River, the Phimai National Museum collects and displays artefacts, reflecting the development of culture in the lower northeastern region covering Nakhon Ratchasima, Chaiyaphum and Buri Ram provinces since ancient times. With the advent of the biennale, it is housing artwork that underwent the process of reinterpretation.

Inspired by her trip to Phimai Historical Park, Rudee Tancharoen invites guests to walk through cylinder-shaped bronze bells hanging from the ceiling in her interactive installation. On close inspection, they adopt an ancient lost-wax casting technique. Some may think they get in the way, others may enjoy their presence. 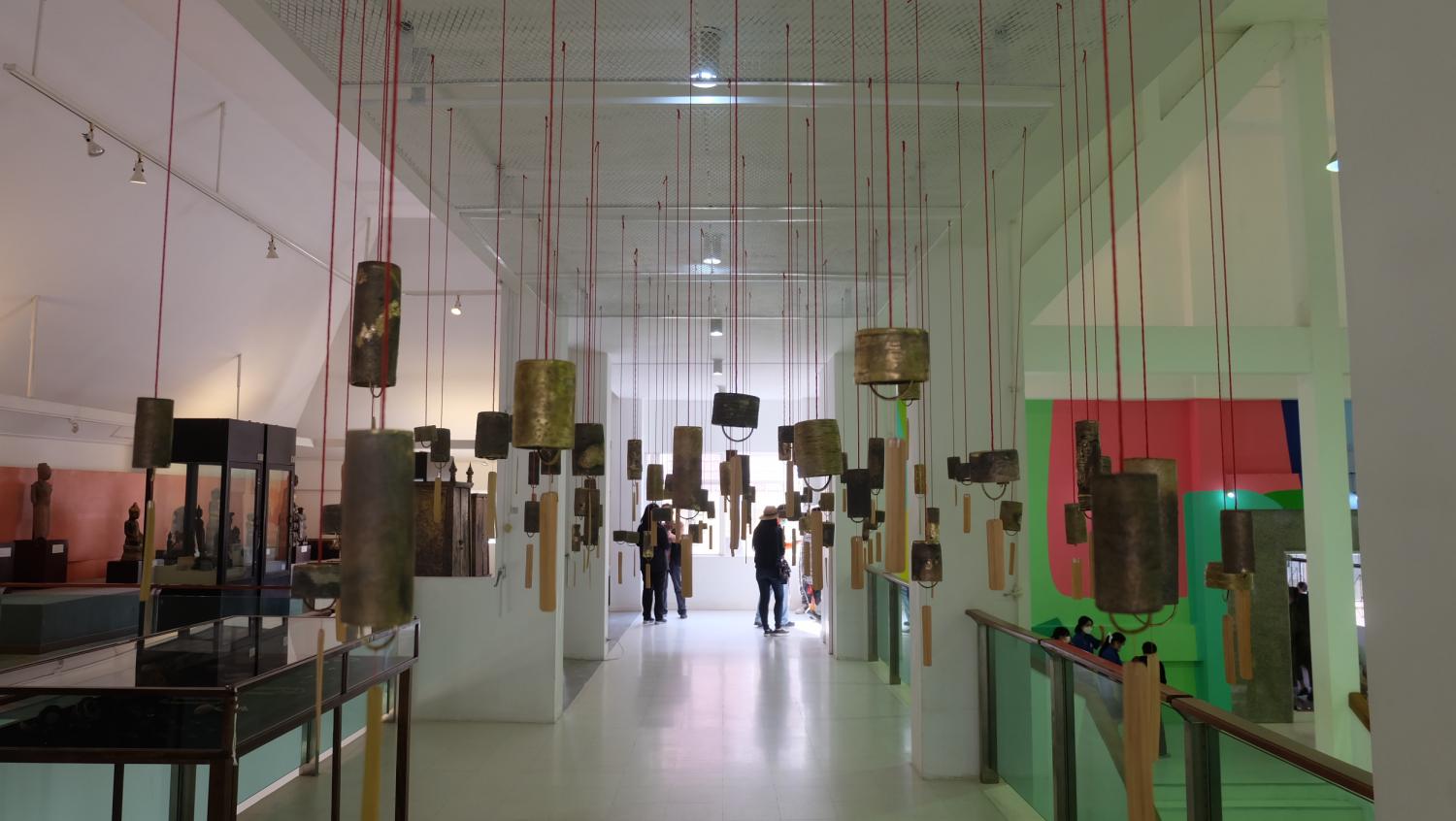 "When I looked back, I saw the historic site and the modern city. It dawned on me that the present will become the past. Change is inevitable, but the question is how the old and the new can co-exist," she said.

Her installation also includes a documentary and a collection of jewellery that preserve local wisdom. Rudee worked with Tongkum Pratummas, the fifth-generation ancient casting master in Ubon Ratchathani, for a decade. As time goes by, the waning popularity of the job has changed the local way of life.

"Ancient casting is not a one-man show. It involves apprenticeship where the old transmits wisdom to the young. It is about building a relationship. I didn't solve the problem, but made a contribution to some extent. When I brought newcomers to the community, locals felt happy and proud to pass on their knowledge," she said.

Her work is not alone in reinterpreting everyday objects. Japanese designers Kosuke Sakakura and Kensuke Yoshida adjusted used garments, some of which were chewed by mice and were worn from daily use, from a village that still practises sericulture for the production of traditional clothing phasin. Although they were unable to conduct field research, they managed to recreate them in the installation.

Outside the building, visitors can enter a warehouse that collects artefacts in the light and sound installation Memories In Light by Japanese architect Tsuyoshi Tane. Entranced by sutra from Buddhist scripture, guests can stand in awe of lintels that are illuminated by moving light. A curator said this group of art installations echoes the history of Phimai where excavated archaeological sites and objects can be given a new lease of life. 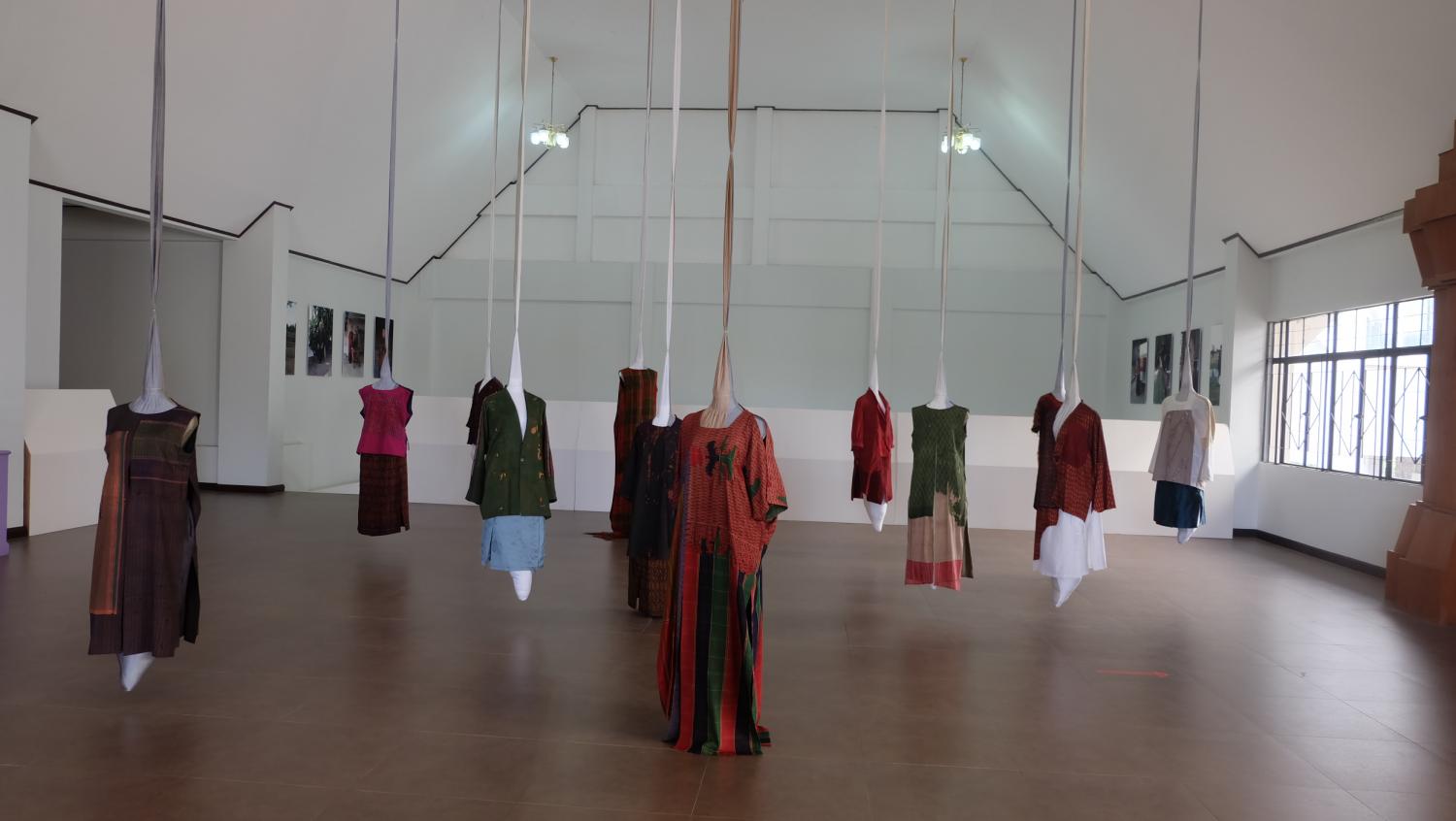 Who says artwork is produced by or intended for humans only? To prove their point, some artists break new ground in a menagerie. Located on Ratsima-Pakthongchai road, Nakhon Ratchasima Zoo is home to more than 2,000 animals and 218 species from around the world. It is the country's largest crane breeding centre.

South African artist Bianca Bondi created her installation inside the zoo's pavilion. The Antechamber (Thai Crane) invites roaming humans and animals to a bedroom surrounded by piles of salt, copper objects and dead plants. At the centre of this room, however, is a bed with fresh flowers coming out of a circular pond. 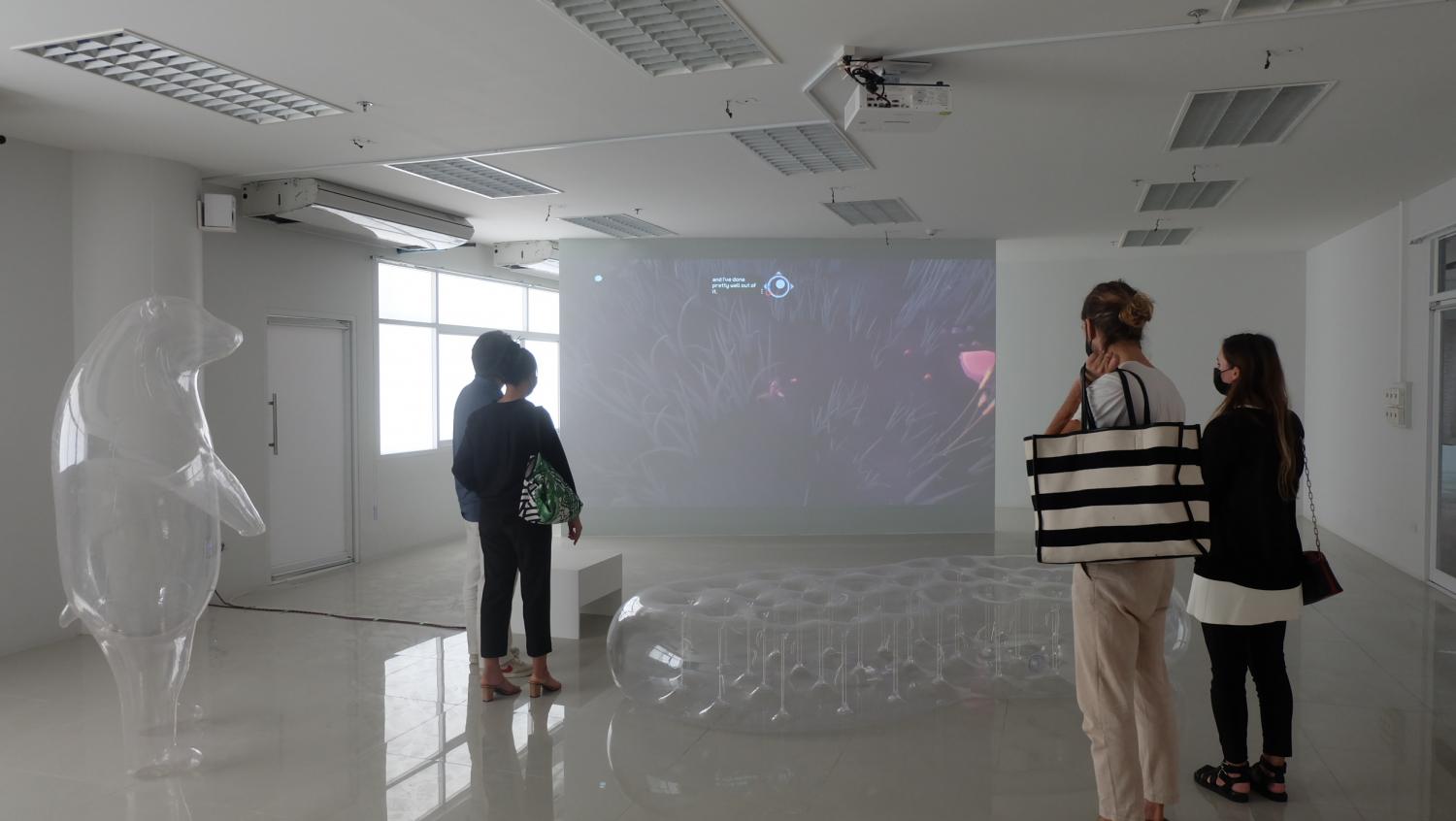 Simulation game Everything allows players to be anything in the universe. Thana Boonlert

"While the piece in Busan Biennale [2020] is about the dying swan, here is a piece that relates to the Thai crane, which thanks to the rehabilitation programme has been reintroduced into the well. It is more about life instead of death," she said. "It [salt] started out white and pure and then there are lizards, bugs and cats, but we are going to avoid the bugs. They come and enter the piece and leave their traces everywhere. It is the piece that is constantly evolving."

When guests leave the pavilion, they can see a 9m wooden structure that invites them to climb up and find a bird's nest. Inspired by traditional rice barns, Asst Prof Boonserm Premthada, lecturer at Chulalongkorn University's Faculty of Architecture, creates his installation The Rice Tower to celebrate the local way of life.

"I have transformed disappearing rice barns into a structure that connects the ground to the sky," said the winner of the Silapathorn National Award for Architects in 2019.

"It is a new milestone for art that transcends aesthetic purposes. It is an art that protects the environment. It is a reminder of the non-human centre. Only when we decentre ourselves, we can become humans again. By putting the artwork in an unfamiliar place, I am saying that local is the future."