The march towards legalisation

When Digital Economy and Society Minister Chaiwut Thanakamanusorn said he would explore ways to legalise the sale of e-cigarettes and vaping -- as many other countries have done -- since it poses less risk than conventional smoking, he also mentioned how e-cigarettes being sold online and on the black market damages the local tobacco market, leading to loss of 6 billion baht in income each year. Chaiwut's statements have stirred debate among supporters of e-cigarettes and anti-smoking campaigners.

Most people who support legalisation are smokers who believe vaping contains fewer harmful chemicals than regular cigarettes, especially tar which contains carcinogens. Without the presence of tar, vapers feel less at risk of developing cancer.

Maris Kranyawath, a member of the End Cigarette Smoke Thailand group and one of the founders of the Facebook page titled "What Is E-Cigarette?", has smoked e-cigarettes for a decade and feels healthier compared to when he smoked conventional cigarettes.

"Everyone who switched from regular cigarettes to vaping became healthier. I gradually cut down on vaping nicotine from 18ml to 6ml. Yesterday, I was able to take part in a four-hour meeting without the urge to smoke," said Maris.

E-cigarettes were introduced to the market a decade ago. While regular cigarettes contain more than 7,000 chemicals, an e-cigarette only consists of liquid containing chemicals such as nicotine, propylene glycol, glycerol and flavouring. Dr Winai Boweja, a pulmonologist at the Pulmonary and Pulmonary Critical Care unit at Phyathai 3 Hospital, explained that an e-cigarette can contain zero to 2% nicotine at most.

"Pulmonary emphysema patients who had been smoking for a long time enjoyed a better quality of life after switching from regular cigarettes to e-cigarettes. However, claims of e-cigarettes being better than normal cigarettes are not completely accurate because it only refers to short-term studies. The chemicals found in vaping are different than those in regular cigarettes and most have not been studied for long-term effects," explained Dr Winai.

Vitamin E acetate can be consumed or applied to human skin, but inhaling aerosols of vitamin E acetate is harmful. To appease smokers, flavours such as menthol, vanilla, bubble gum and grapefruit have been introduced in e-liquids. Although these flavours are common in the food industry, there has been no study about the effects of inhaling these substances.

Due to EVALI, Dr Winai who is also head of the Healthy Lung Center at Phyathai 3 Hospital, said people should wait for the results of studies that look at the long-term effects in order to judge the safety of e-cigarettes.

"In a study, mice that inhaled aerosols from vaping were found to have increased inflammation in the lungs," said Dr Winai.

While smokers are aware that nicotine in vaping is an addictive substance, not all understand the harmful effects of nicotine. Maris does not believe nicotine is harmful because it is not categorised as a narcotic. Dr Winai said people assume that nicotine is only addictive.

"As a matter of fact, research indicates that nicotine can cause an increase in blood clots. Nicotine has also been found to promote cancer development," said Dr Winai.

Since vaping is relatively new, several studies have looked at different vape products. Being a vaper, Maris believes a study from California which reported on results from a smoke detector.

"It revealed that smoke from vaping was not different from air fresheners in an air-conditioned room and that second-hand smoke from vapers did not harm others. Despite causing no harm, non-smokers might feel annoyed by the odour, so vapers should not smoke in public," said Maris. 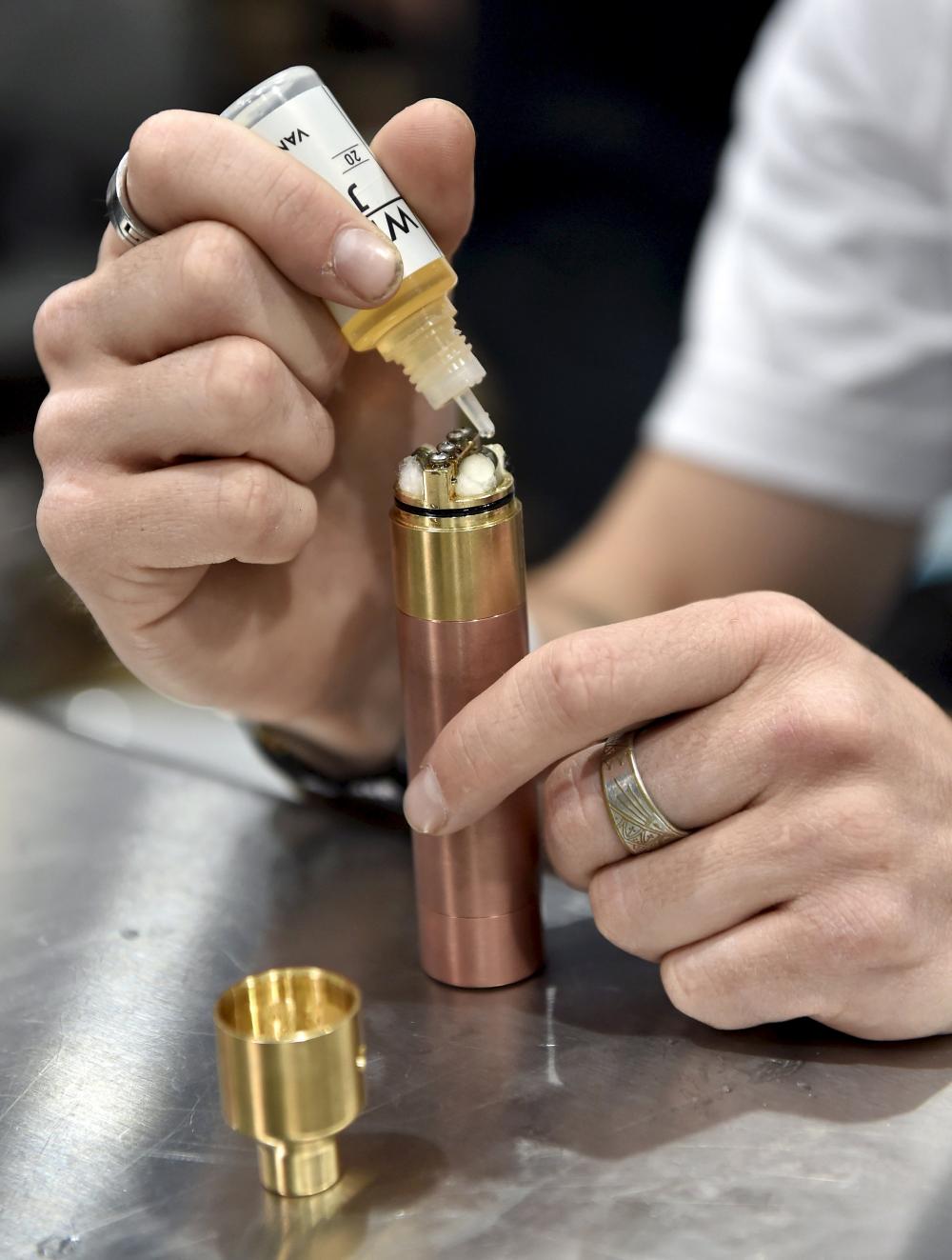 In contrast, Dr Winai said many e-cigarette smokers misunderstand that their second-hand smoke does not harm others.

"People near vapers are exposed to different chemicals than they are from second-hand smoke from regular cigarette smokers. A study reported that vapers exhale toxic chemicals into the environment. Urine tests of people who stand near vapers also contained chemicals found in the e-liquid," he said.

While the National Statistical Office of Thailand has reported there are 78,742 vapers in the country, Maris believes there are almost a million. He came to this estimate by looking at the number of followers of social media pages that sell vape products. Due to high demand, people are concerned about youngsters being targeted by vaping companies with flavours and colourful packages. Maris said the ECST wants to legalise vape products because underground products are not regulated and smokers who want to switch from regular cigarettes will be able to legally purchase e-cigarettes.

To protect young people, the ECST has proposed regulations to ban minors from buying and using vape products. Maris said vape stores must acquire a selling licence and salespeople must be trained properly.

"A salesperson must provide vape products that are appropriate for each user. Moreover, each vaper should register for a vape card at a district office first. When a vaper purchases products, he/she must show the card. Also, vape stores must have a machine to scan cards to identify the customer who has a daily limit of no more than 200ml of e-liquid per day. This will ensure vapers do not consume too much e-liquid or sell it to others," explained Maris.

"Thailand has had a ban on vaping for seven years, but the number of vapers has continued to increase despite it. This means the policy has not been effective. If vape products were legal, they could be examined and standardised by state agencies. Regulating vape products may also increase the price but this will keep youngsters away. E-cigarettes are safer than regular cigarettes, so why ban a safer product and sell the more harmful one?" said Maris.

Dr Winai said he considers e-cigarettes an innovative product but as a pulmonologist, he does not encourage anyone to use vape products that contain unknown substances.

"If there is regulation of e-cigarettes, it means all substances have undergone long-term research for five to 10 years. Although restrictions state that nicotine should not be more than 2% in e-liquids, studies have shown that products on the black market contain higher nicotine levels than the description on labels which must provide information about nicotine and how many puffs are equal to a regular cigarette. Unfortunately, many users think vaping contains lower amounts of nicotine and vape several times a day. This can increase their nicotine level to equal one cigarette," said Dr Winai.

Many smokers have switched over to vaping hoping it can help them to eventually quit. However, Dr Winai said studies have shown that vaping does not help smokers quit.

"Vapers, especially, teenagers develop emotional dependence to smoking some substance, so they cannot quit vaping. The best way to quit is cold turkey. The number of smokers who have quit cold turkey is low, but smokers who decide to opt for this method are successful and do not start smoking again," said Dr Winai.

"Ensuring teenagers do not smoke starts at home. I have noticed that non-smoking youngsters come from non-smoking families. Meanwhile, young smokers have family members who smoke or have unstable family backgrounds. Playing sports can also help prevent teenagers from smoking. Australia, which has a sporting culture, is a good example. The number of young smokers in Australia is low. If people are health conscious, they do not want to do anything to damage their health," concluded Dr Winai.