Tunes of the forest

It is a heavenly radio broadcast that reminds villagers twice a day -- morning and late afternoon -- of their feathered companions under threat of extinction. Despite being hampered by lockdowns, artists have managed to imitate birdsong for public announcement systems to promote human-animal relationships.

Broadcast in Nakhon Ratchasima's Phimai, the sonic intervention, More-Than-Human-Songs, is produced by Icelandic-Danish artist Olafur Eliasson and two local bird imitators. It is part of the Thailand Biennale, Korat 2021, being held under the theme "Butterflies Frolicking On The Mud: Engendering Sensible Capital", until March 31.

Born in Copenhagen in 1967, a city to which his parents emigrated from Iceland, Eliasson developed his artistic skills in childhood and honed them at the Royal Danish Academy of Fine Arts where he discovered that art is about connecting with the world. Since starting his career in the early 1990s, he has been known for large-scale works that include natural elements such as water and light. 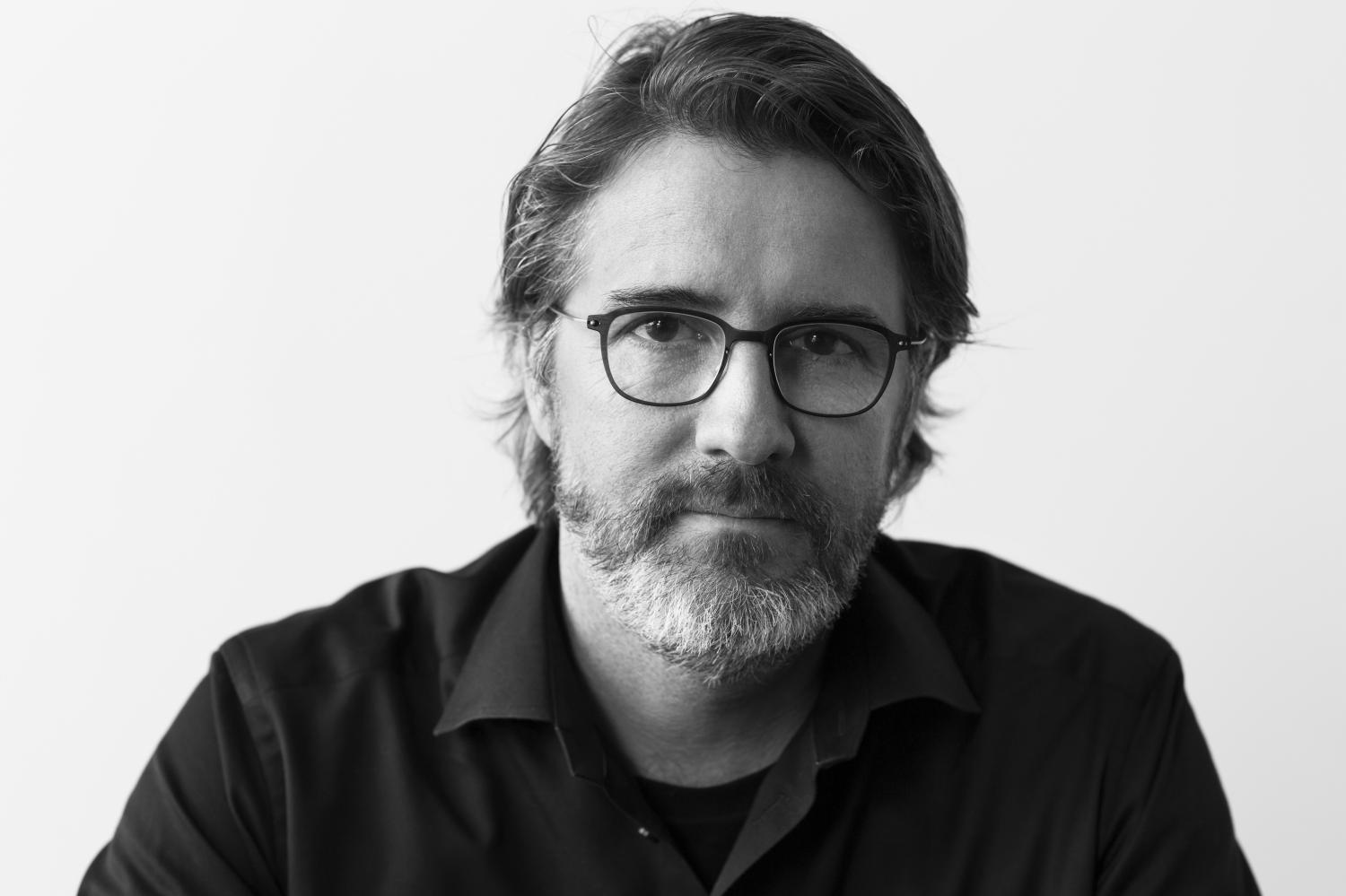 His interest began with trips and friends who showed him the richness of local culture. People embrace nature in everyday life, in particular, the imitation of bird sounds, which can be practised while doing other tasks. Those who master the skill can connect with the more-than-human world. So Eliasson created a sonic intervention to forge ties between humans and birds.

"I believe that people in many ways -- perhaps without even knowing it -- learn from what nature offers us, without giving anything in return. These bird imitators don't take from nature -- what they do isn't extractive. Instead, I see this activity as an entry point that draws our attention to the often under-appreciated ecosystem of more-than-human lives. Perhaps, by suggesting that people pay attention to the quality of birdsong, it can offer listeners an opportunity to reconsider their relationship with nature," he said.

Eliasson worked with two local bird imitators, Rounnakorn Thientongtaworn and Veenus Janrew, to create a mellow tune. He is interested in using radio to broadcast birdsong -- somewhat unannounced -- in an equal measure of popular music and news, covering six villages in the province. 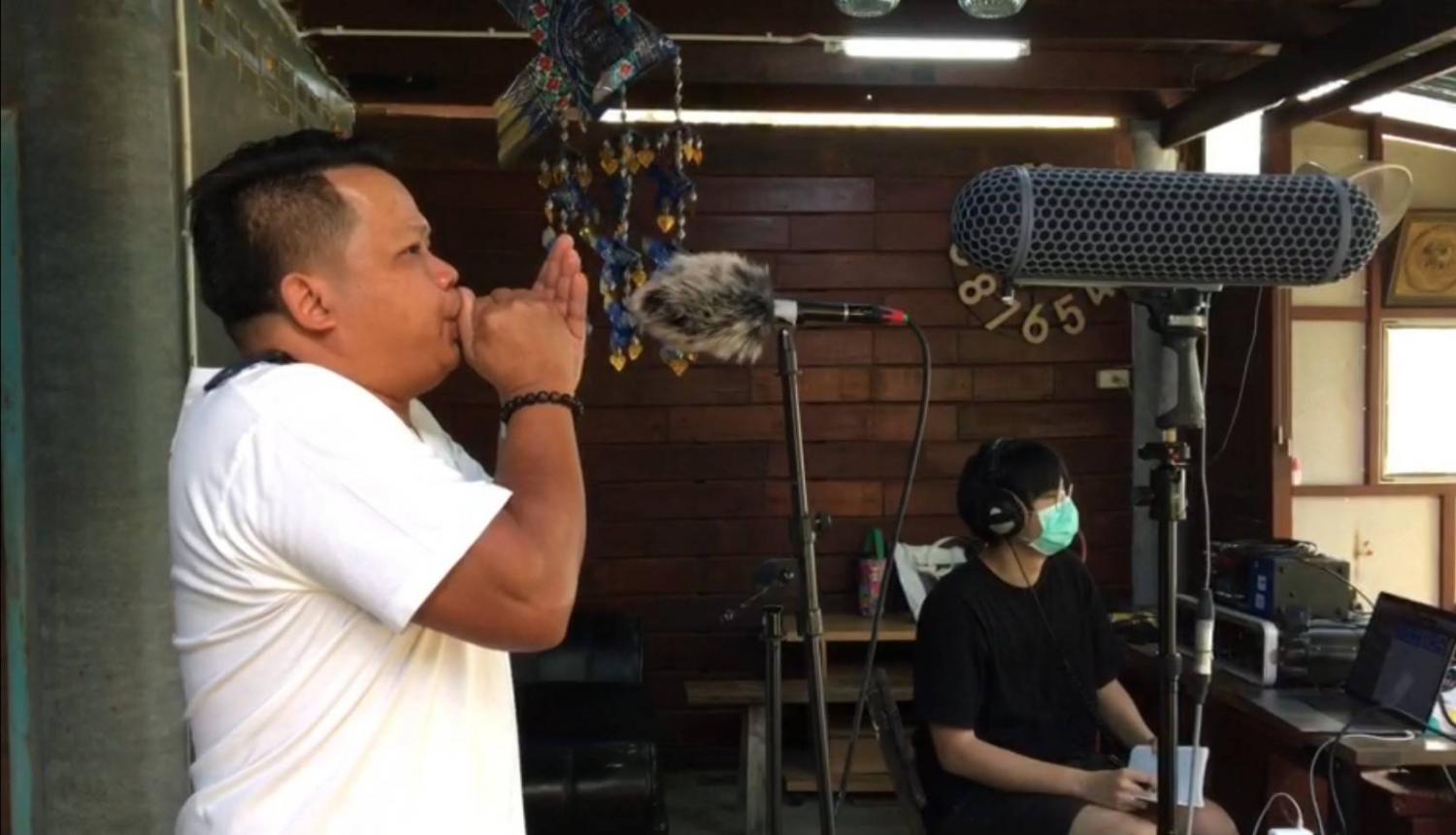 "I hope to draw attention to the fact that human beings don't own urban spaces. Instead, we share these areas with other beings such as birds, insects and other species which have adapted -- willingly or not -- to live in an urbanised environment," he said.

More-Than-Human-Songs features 10 local bird species, including the oriental magpie-robin, the white-rumped shama, the zebra dove, the common iora, the tree sparrow, the golden-fronted leafbird, the Eurasian hoopoe, the plaintive cuckoo, the greater coucal, the common tailorbird, the yellow-eyed babbler and the red-whiskered bulbul.

Still, it is a departure from his massive installations. In 2003, he created a sublime artificial sun shrouded by mist, titled The Weather Project, in the Turbine Hall of the Tate Modern in London. Last year, he held an exhibition, "Life", where green water and aquatic animals were allowed into the gallery space of the Foundation Beyeler in Basel, Switzerland.

He has carried out many projects in public spaces. The New York City Waterfalls, commissioned by the Public Art Fund, was set up along the city's waterfronts in 2008. In Ice-Watch, Eliasson and geologist Minik Rosing transferred free-floating icebergs from a fjord outside Nuuk, Greenland, to public squares in European cities to raise awareness of climate change. 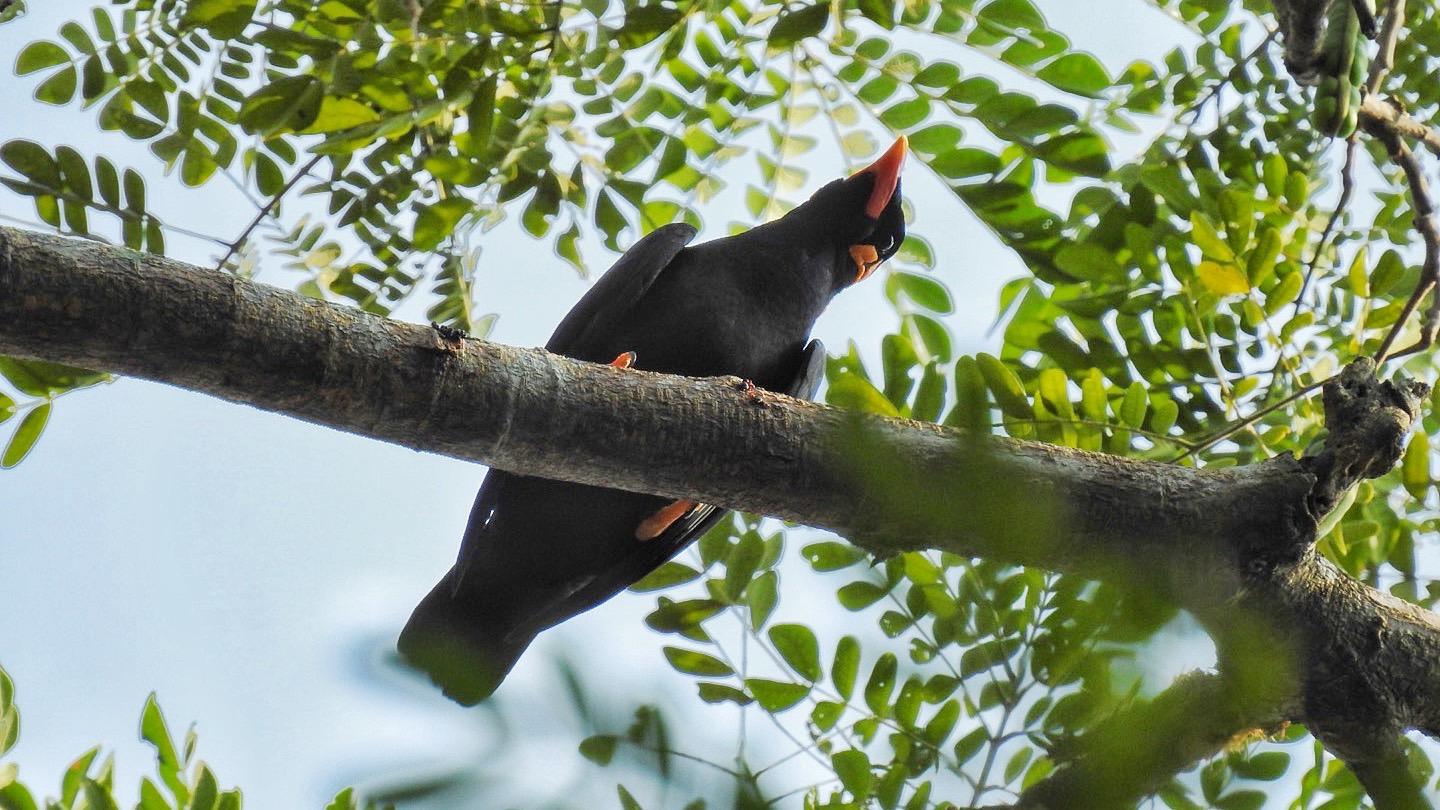 Eliasson, however, felt excited to "present something which is small and intimate, yet distributed in time and, in its own way, expansive, spanning across human and non-human worlds". The Weather Project and The New York City Waterfalls were large in scale and accessible, but their size does not make them more interesting than sound experiments.

"This is available to hear in fleeting moments throughout the day. The work aims to enrich life in public space in an unspectacular way, by doing something that is incredibly beautiful and subtly surprising," he said.

Eliasson has been dubbed a social practice artist who creates participatory and community-driven works to tackle social issues. He founded the social business Little Sun to produce solar lamps and chargers for use in off-grid communities and has campaigned for climate action. By engaging with others, he nurtures valuable aspects of life, especially interconnectivity. "I believe that by re-focusing the current human-centred narrative to one that considers our entanglements with the delicate ecosystem around us, and in us, it can provide a meaningful way for us to engage with our future," he said. 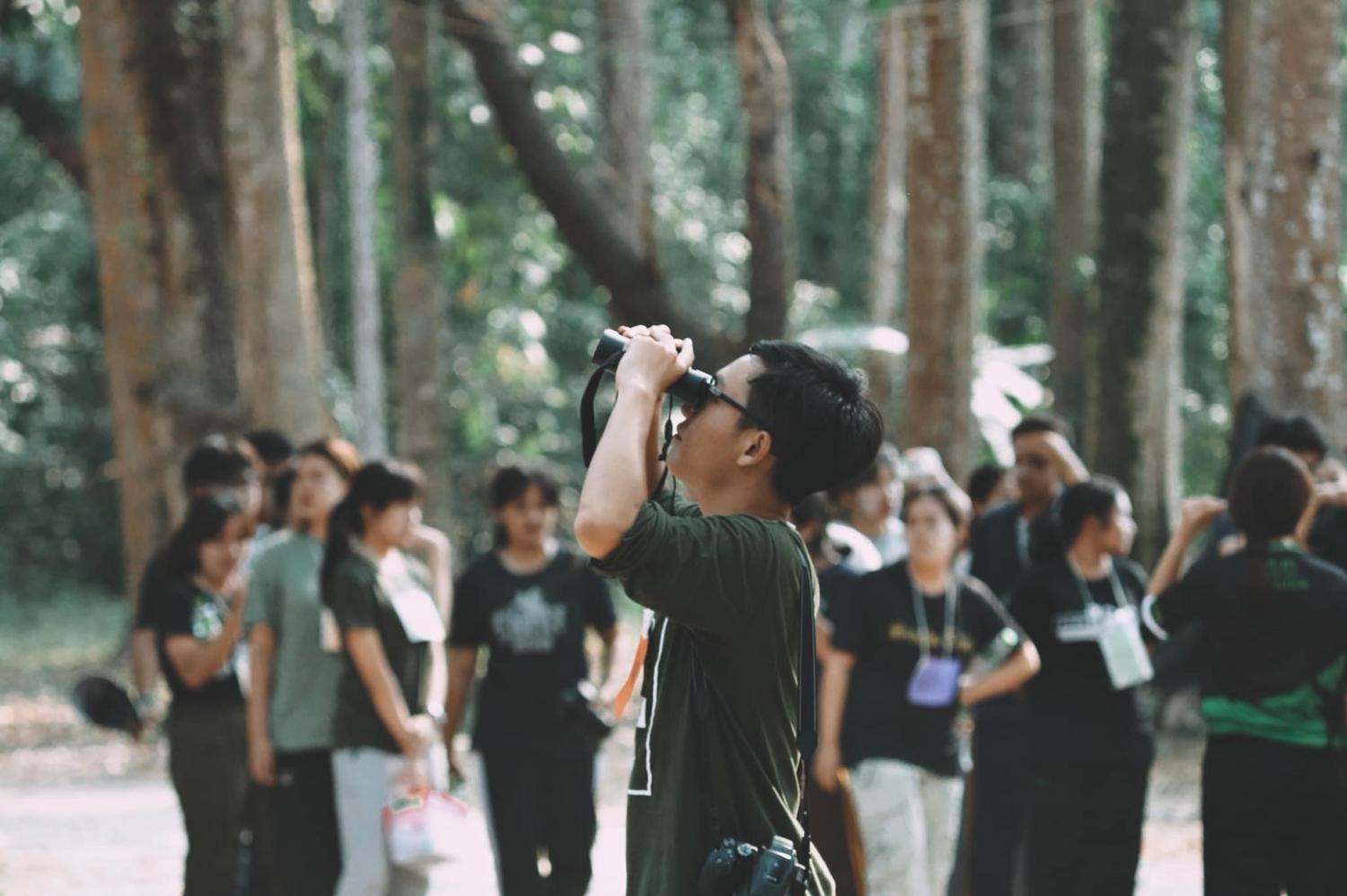 Despite the pandemic, two local bird imitators contributed to the project. Rounnakorn is an animal husbandman by trade but likes walking in the forest in his free time. After being contacted by staff, he left a remote farm for a university studio where he spent three hours whistling bird sounds.

"I never met the artist in person, but it is an honour to make my hobby useful to those who care about birds," he said. "Some species can adapt to the urban environment. They can eat a variety of food, including leftovers, and reproduce. Meanwhile, others live in orchards and feed on fruits only. Their population is not high."

Rounnakorn can imitate around 40-50 bird sounds out of more than 1,000 species in Thailand. His passion grew from his childhood experiences. In fifth grade, he encountered a tree sparrow and began to distinguish different types of birds. When he studied agriculture at university, he walked in the forest and took up birdwatching. It is at this time, he began to whistle.

"I kept practising until birds responded, which means that the range must be very close [to natural sounds]," he said, demonstrating the high-pitched sound of the oriental magpie-robin. "It is a wonder that feathered creatures still abound. When I come across rare species, I will report to conservation groups who monitor the population."

When asked about the purpose of vocal mimicry, he said he whistles birdsong for pleasure, instruction and conservation. 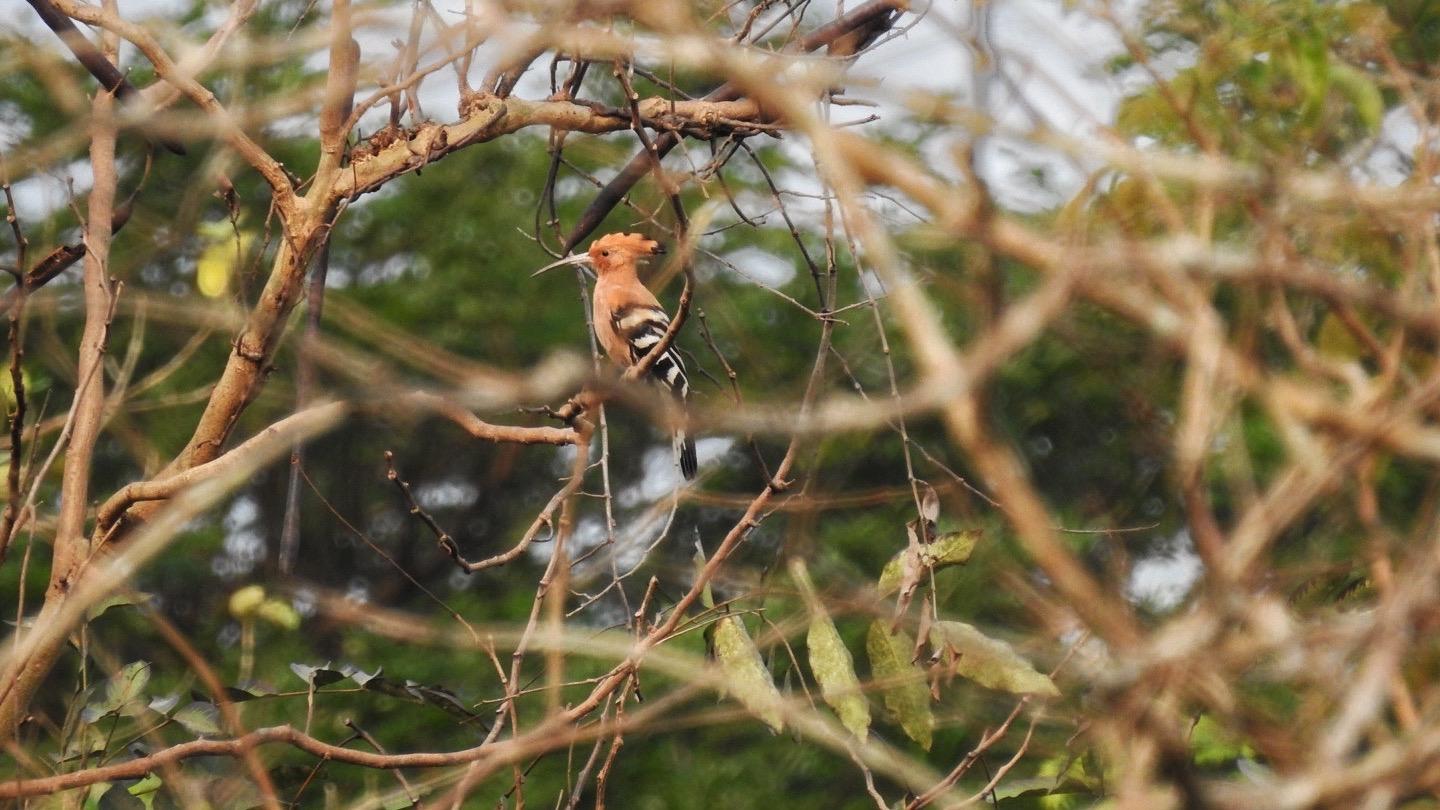 "Whenever birds are around, I will whistle with them as if I'm talking to neighbours. Due to habitat loss and poaching, I can whistle to raise awareness," he said.

Veenus, a music instructor, passes on the art of birdsong to students in his garden, which is home to the muse or sacred fig. When he was a dek wat (temple boy), he learned vocal mimicry from senior monks who produced the sound from the tip of a leaf. Since then, he has imitated birds for entertainment.

"There is no purpose. It is just a sense of wonder. People always ask how we can reproduce such a melodious birdsong. I also incorporate it into traditional music to make the performance more interesting," he said. "I teach new groups of students every year. Otherwise, the art will die. I am happy to amaze them. I wonder how the technique was discovered. It is awesome."