There's no doubt that Thai wooden houses possess a quaint and charming character you'd be hard-pressed to replicate elsewhere. Therefore, it's somewhat aggravating that they don't enjoy the same fawning over that neoclassical or colonial buildings in Bangkok do when it comes to preservation. Rickety, stilt wooden houses alongside the river may seem common and "normal" for the average Thai, but Bangkok-based Filipina entrepreneur Irma Go has always loved these structures, especially while taking visiting family and friends on boat tours on the sleepy canals of Bangkok.

When she saw a waterfront property on sale in Bangkok Noi back in 2016, she and her Thai husband Kirati Thepsoparn immediately acquired the land and the three dilapidated stilt houses that came with it. It would be the beginning of a five-year project that envisioned an authentic but glorious Thai riverside villa in which travellers to Thailand could stay over together as a group. The result is now Siri Sala, a waterfront private villa, which launched last month.

Sitting on land a bit over 1 rai, the full-service villa houses four bedrooms and two flexi-purpose rooms, one of which can morph into a spa suite. True to the functional structure of a traditional Thai home, the bottom floor is open-air and spacious and features a fully-equipped open kitchen, a library/workout space, an immense living room and dining room, a 20m saltwater swimming pool, and pops of ponds and tropical gardens children can freely run around in. Although this is a new construction, the villa features original materials such as wooden panels, doors and antique furniture that exhibit the spirit of the original home. A striking example is the reuse of the kitchen window bars from the old home. Free from the dated, lotus motifs, the bars feature a simple graphic diagonal pattern which gives the place a modern yet Thai sheen. The ultimate highlight is The Heritage Bar, which was reconstructed with 75% of the wood from the oldest of the three houses. The perfect clubby setting for jazz jams, karaoke sessions, poker nights, birthday parties or wine tastings, the wooden house is stocked with niche Thai spirits this writer had never seen before. Guests of the villa can enjoy exclusive access to interesting selections such as Bussaba wheat beer or Grandma Jinn's, a sugarcane-based gin. 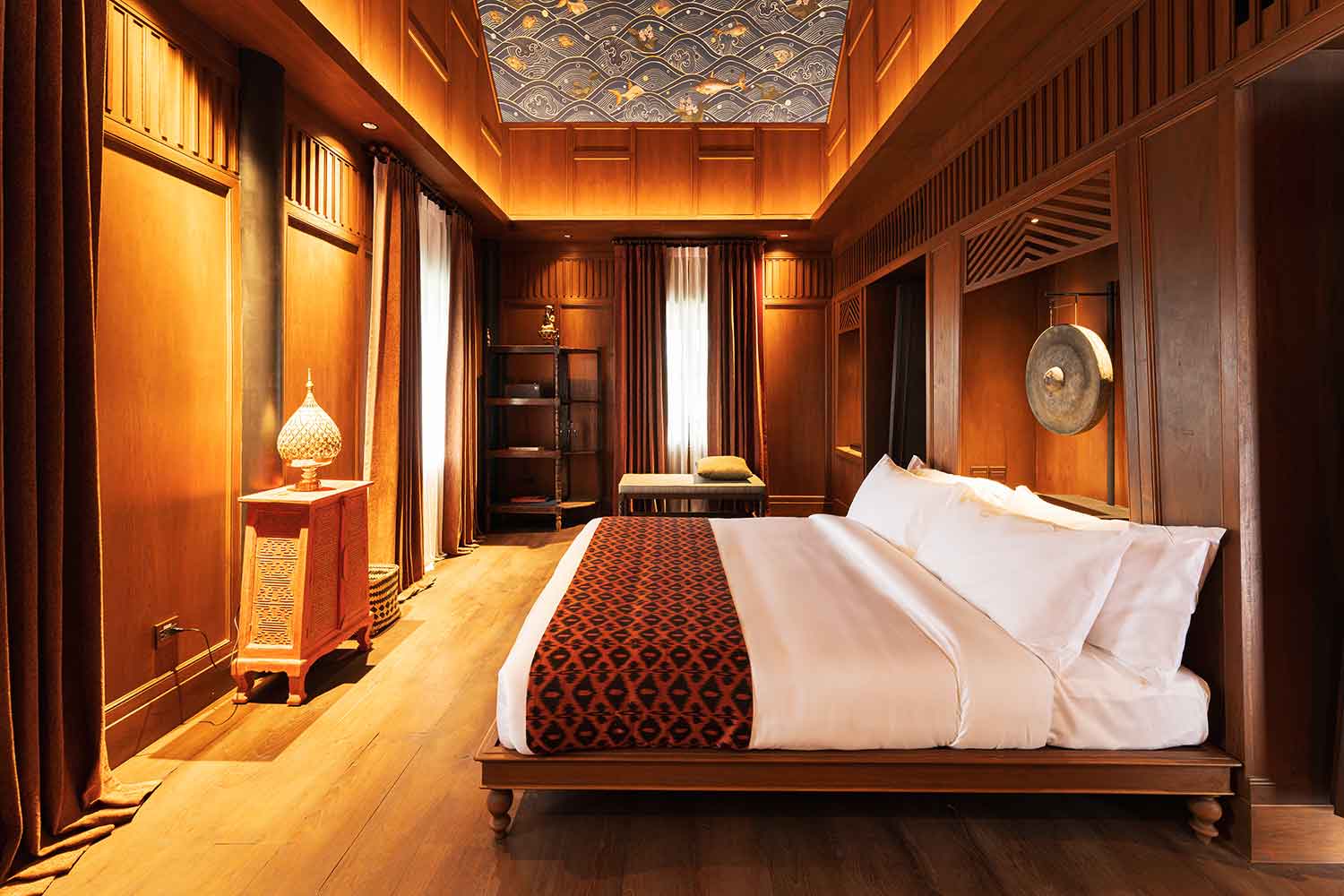 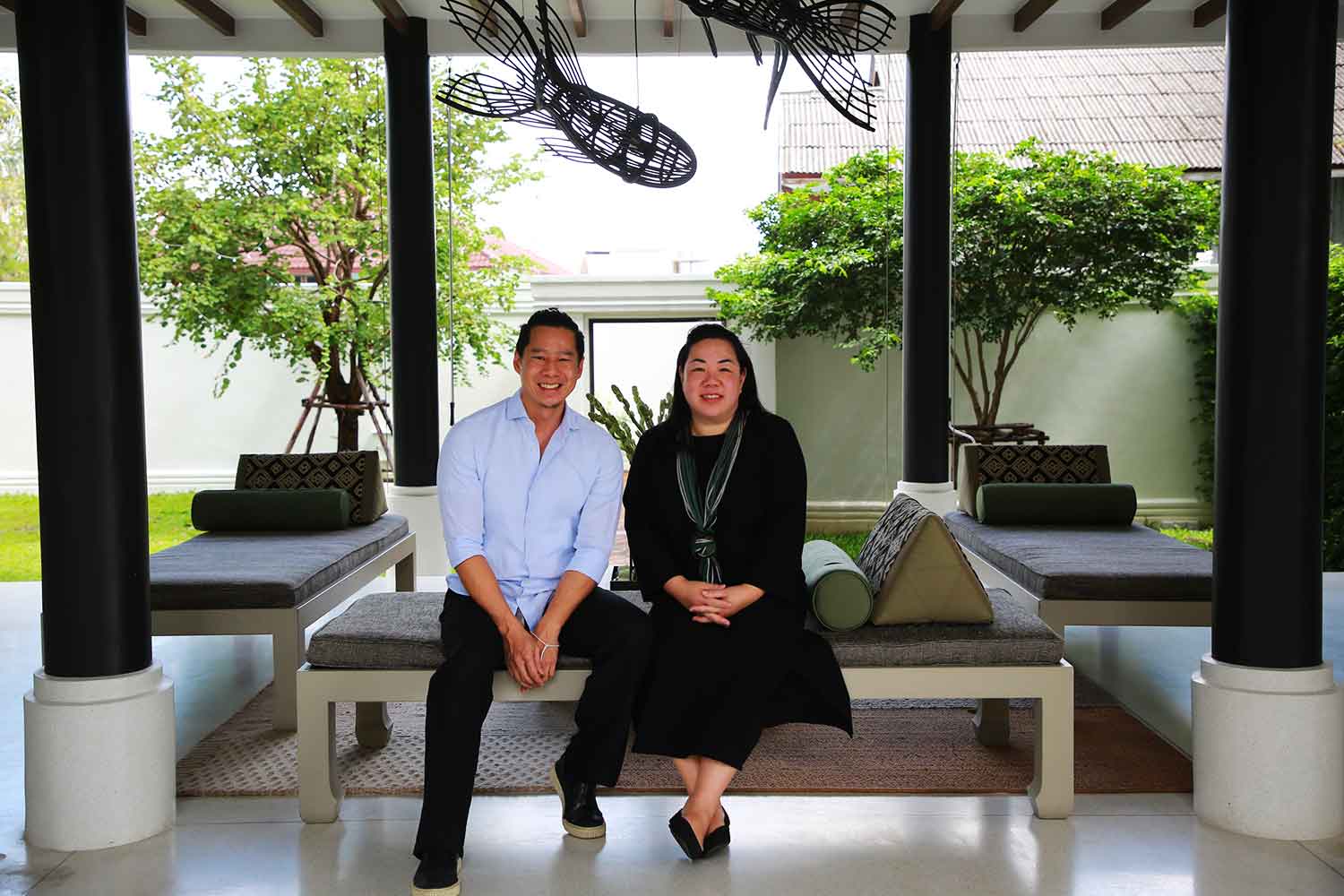 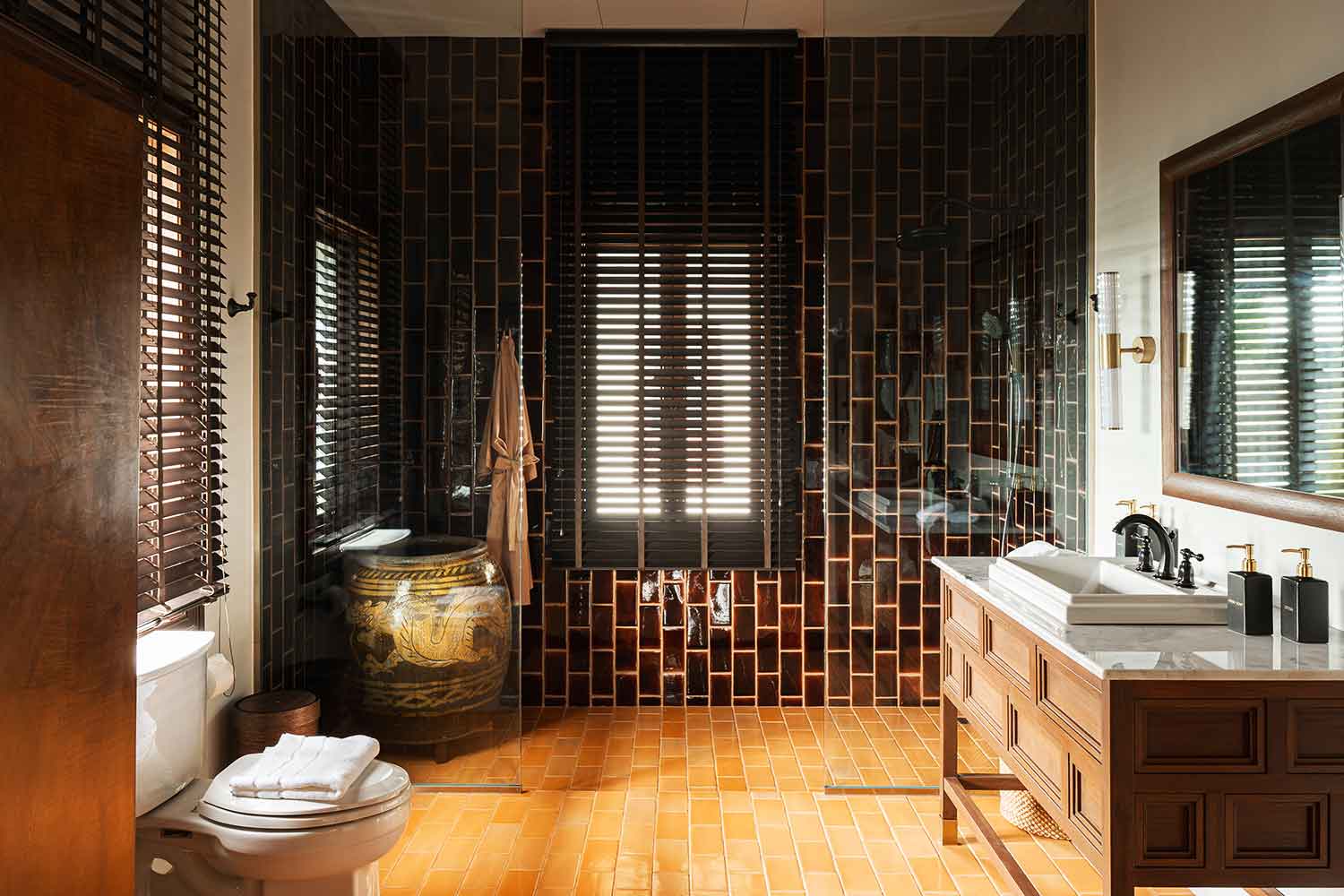 "It's like a terrible jigsaw puzzle," Kirati jokes of their painstaking process of taking apart the old houses and storing the pieces for later reconstruction. "The grand debate of what to keep or evolve was an ongoing one we had over three years. I think most people believe a Thai house must look a certain way and there is no deviation from that. This is a very unusual way of thinking because Thais have always been an adaptable nation -- open to influences from the West and India. But somehow, we stopped evolving when it came to houses. After research with masters of Thai houses in Ratchaburi and Ayutthaya, one thing we discovered is people love Thai wooden houses. They're keen to sit in it a bit but wouldn't want to sleep in one. People see it as a relic of the past to capture on your phone, but not participate in being there. It made us think how those houses looked good but they don't serve our modern purpose anymore. With our goal to show a Thai house to the world, we don't want to show only form, but also the spirit and purposefulness of a house."

This refers to the air-conditioning and all the comforts you'd expect from a 5-star hotel (or fancy home), such as spotless white beds to a resident chef that whips up delectable Thai food. Of course, no one wants to make a trek to the bathroom outside the house or to dine on the floor, so there are glossy in-suite bathrooms (some with the old-school water jars) and a grand 6m-long dining table.

"In a nutshell, it was our interpretation of what a Thai home is today," Go adds. "That line between preserving and modernising is continuously being moved because no one has ever drawn that line. We could tear down the house and no permission is needed because Thai law only covers temples and palaces. It was a completely personal undertaking on our part and we had to police ourselves." 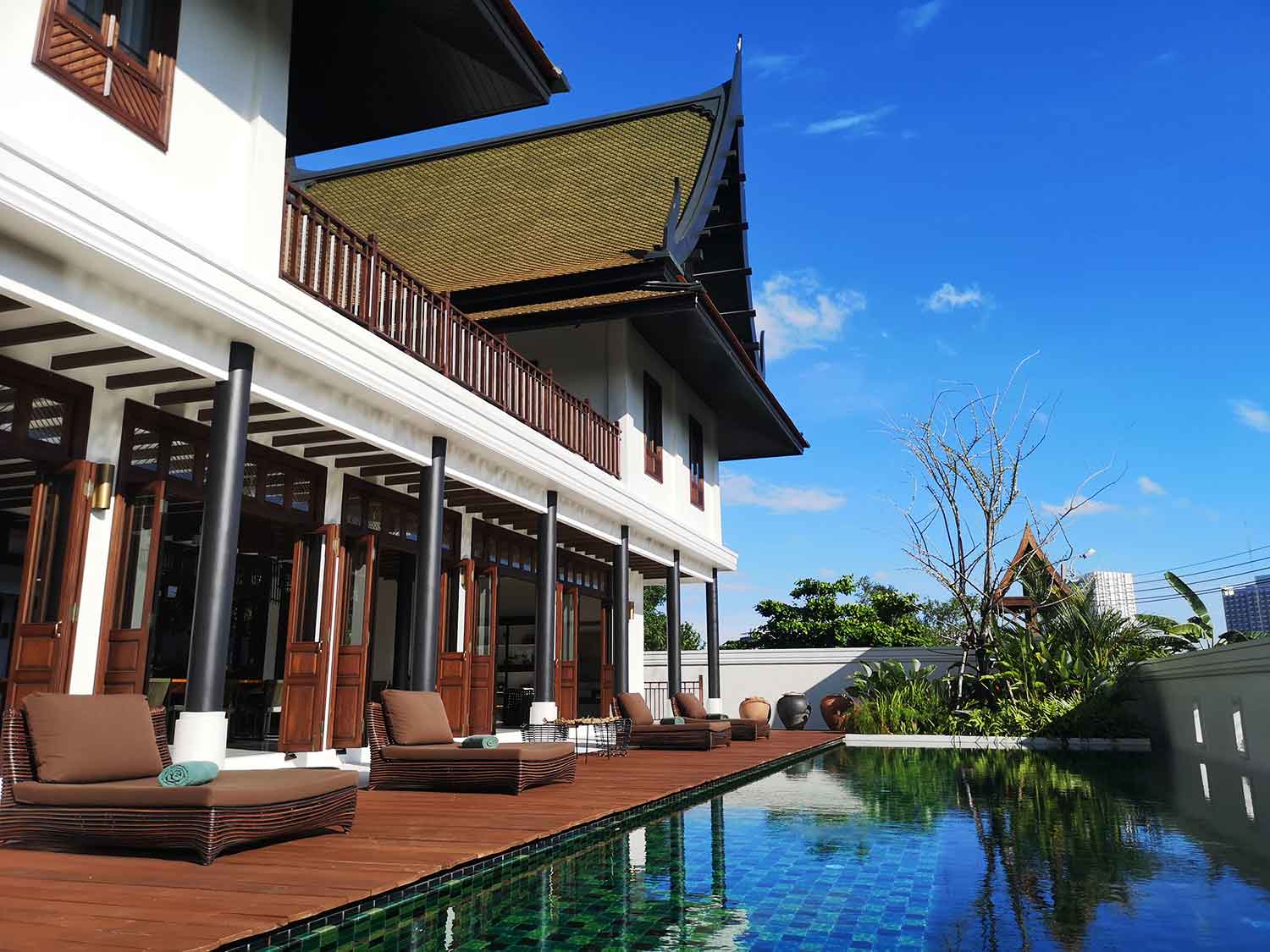 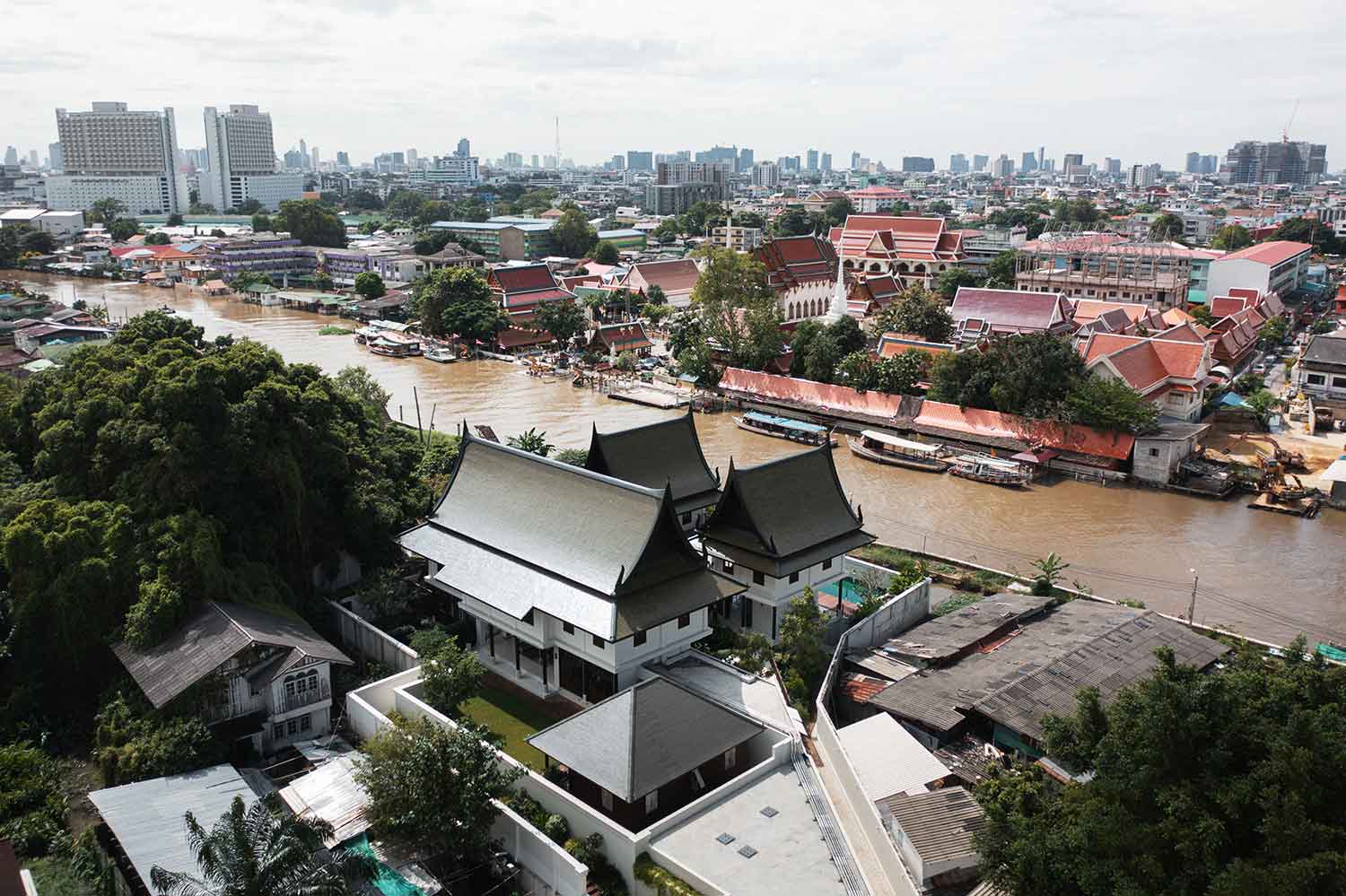 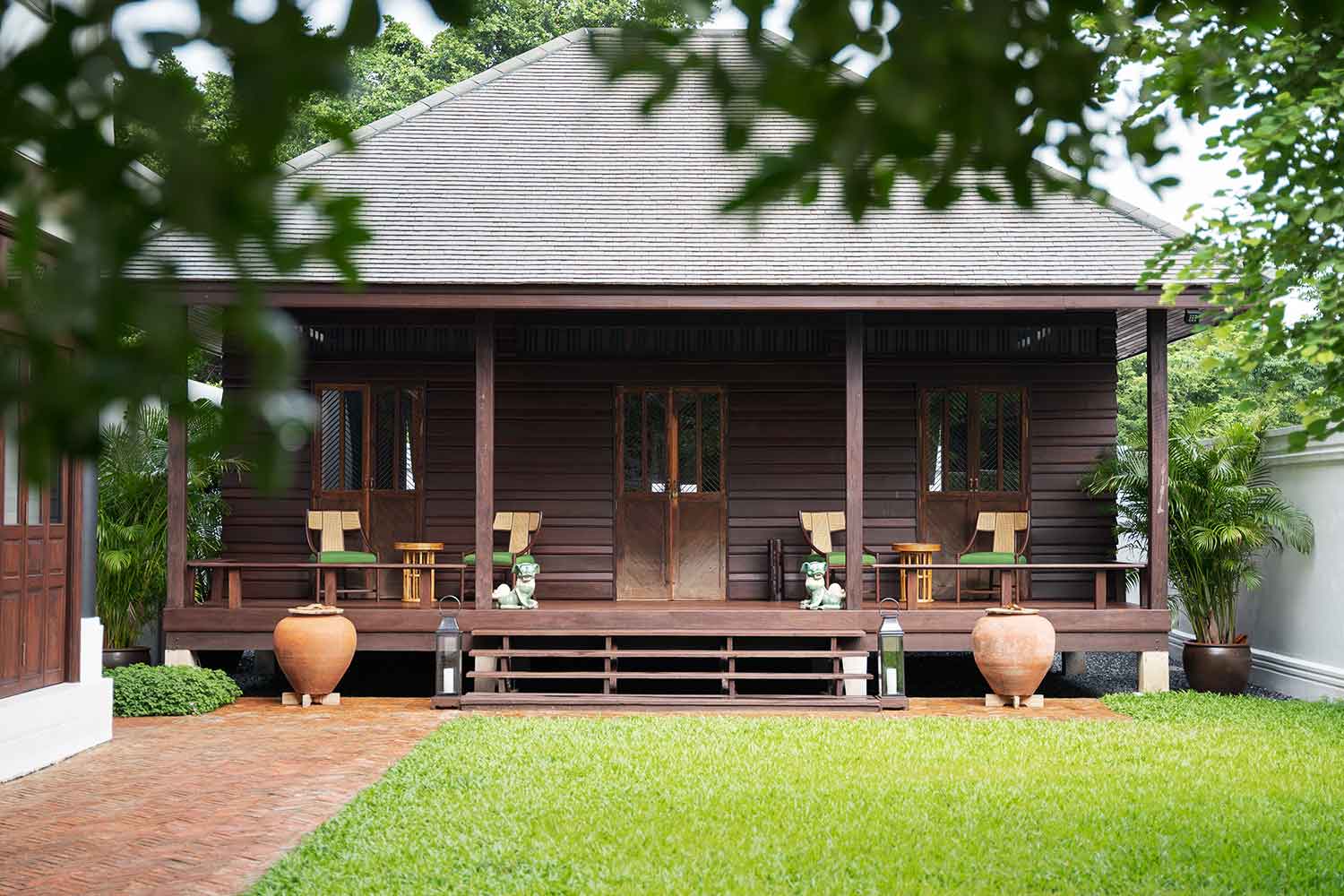 4b Architects is the local, young firm behind Siri Sala, which Go chose for their understanding of restoration since the owner worked in the UK and had overseen the renovation of churches. Nicoletta Romei, an Italian interior decorator, was the talent that tastefully mixed new décor with old bits and bobs Go had saved from the old property and insisted on using. Such details make Siri Sala a stunning location, and we haven't even gotten to the Thai-style ceiling murals in the bedrooms.

"When we travel, we don't just want a room to sleep in," says Go, explaining how she and Kirati now travel after the birth of their two kids. It was the inspiration and ethos behind Siri Sala -- a place where families and friends could congregate while experiencing the trimmings of local culture. "When we went to France, we stayed at a farmhouse and the kids could feed the donkeys. In Tuscany, we met with three family friends and stayed at an olive grove. We want visitors to be able to experience and feel Thailand -- to see this side of Bangkok that has been around since the Ayutthaya period, that's even older than the Rattanakosin side."

Besides muay Thai and yoga instructors as well as spa therapists that can be arranged, Siri Sala is also well-connected to facilitate local experiences such as giving alms to monks or going on neighbourhood tours. In fact, do tear yourself away from the luxurious pavilions and go on their private boat tour that takes guests to see the Bangkok Noi community. There are ice cold towels, delicious Thai snacks, a tour guide that does not hold back on any of the scandalous historical tidbits we love hearing and a fascinating insight into the uncontrived riverside lifestyle. This will be thrilling even for people who have lived in Bangkok all their lives. The route really packs a punch, with the boat finally emerging out from a humble canal and into a suddenly sea-like Chao Phraya River and a grand panorama of Wat Phra Kaew.

Siri Sala is not exactly a place you come to for a million-dollar view, but rather for the immersion in the riverside community it offers and its overlooked history. When cosmopolitan glitz and seeing a mall across the river gets old, Suwannaram Temple is a stone's throw away across the canal from the villa. Home to ancient murals that date back to the reign of Rama III, this is a sleepy royal temple that used to be a cremation site for royal family members. It's an unpretentious view and an enthralling duality to wake up to, made all the better when you have the luxury of being able to show up for breakfast in your pyjamas at whichever hour you want.

Siri Sala Private Villa is located at Charan Sanitwong 34. For more information about stays and rentals for private events and dinners, visit sirisala.com. 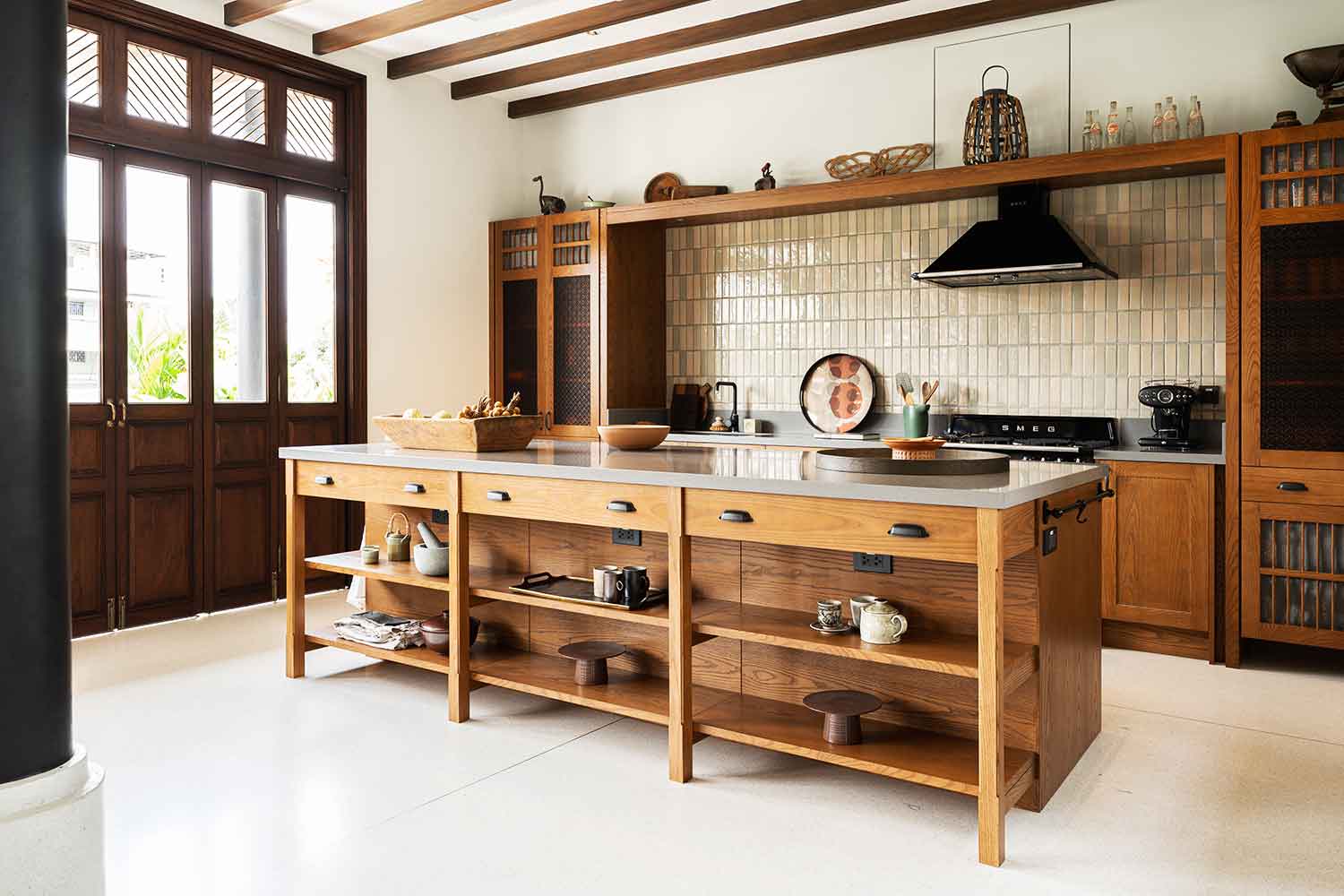 The kitchen for guest use. 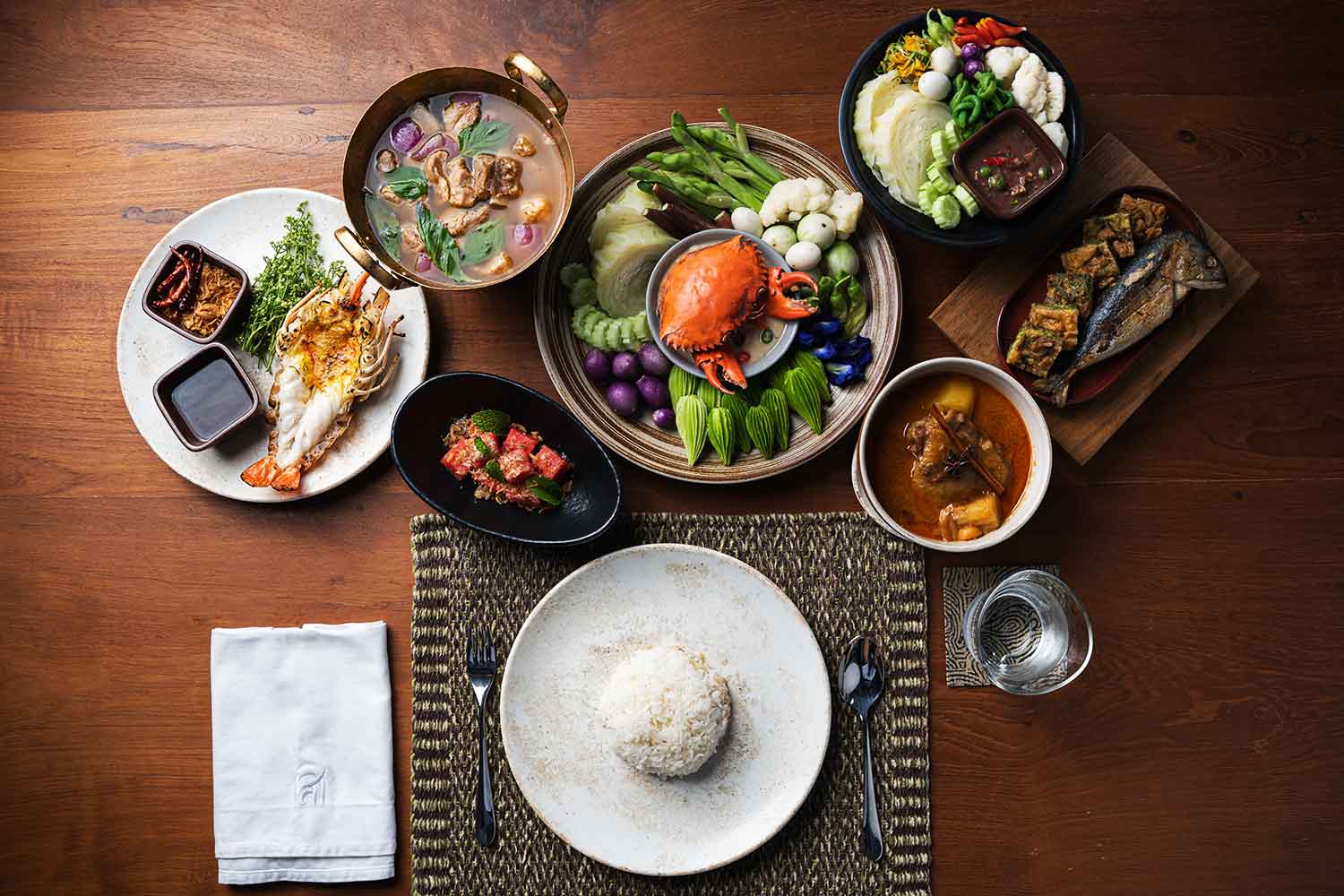 A Thai feast with river prawns as their signature highlight dish.