Inspired by the book The Presentation Of Self In Everyday Life by Scottish author Erving Goffman, Thai surrealist photographer Namoh Kongdhana created two photos under the theme "Everyday, A Play In One Act". The first photo represents "front stage" and portrays a girl sitting in front of a red theatre curtain while all eyes are on her. The other represents "backstage" and depicts a girl enjoying her alone time.

"Erving Goffman wrote in The Presentation Of Self In Everyday Life that people subconsciously 'act' to suit their roles such as, boss, staff, mother, sister or granddaughter. The only time that people stop acting is when they are alone. I present 'front stage' with the element of the red theatre curtain and a mirror. For 'backstage', no eye looks at the girl in her private space," said Namoh.

Everyday, A Play In One Act is a part of Namoh's photo and video exhibition "A Short Stories Book" on view now at WHOOP! in HOP Hub Of Photography, Seacon Square. Namoh said the collection presents her interests in different time periods, so the exhibition was inspired by her daily life experiences, the books she read and the exhibitions she visited. 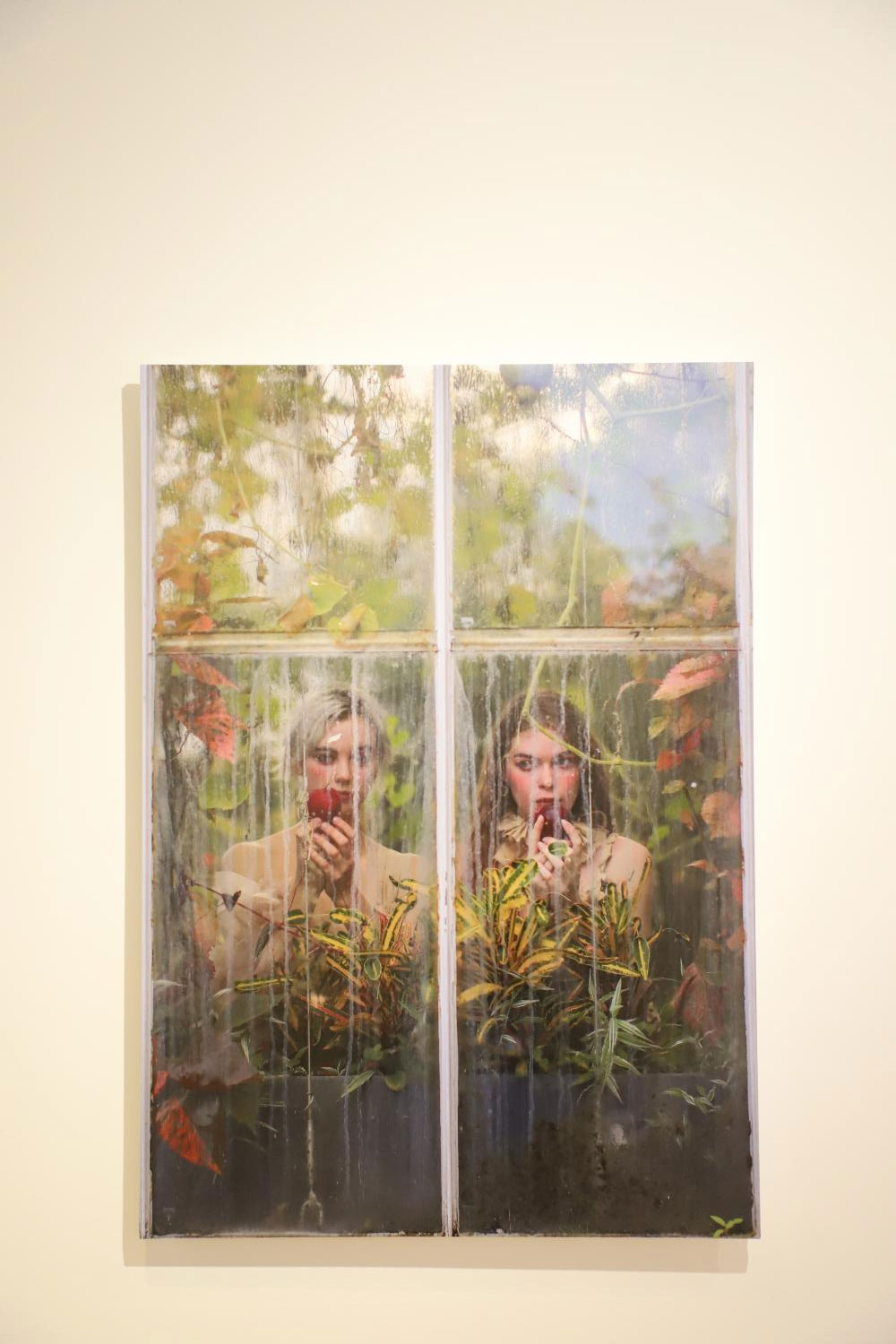 This photo was inspired by the yin and yang concept.

Since Namoh is interested in surrealist art, the exhibition is like a fantasy world that displays bizarre but captivating images. The young photographer said she is attracted to surrealism because it allows viewers freedom of interpretation.

"Before the surrealist movement, art had to be serious or created with particular meanings. Surrealism is created by artists' automatism, so it comes naturally from the inner feelings of artists. After making an art piece, an artist can later analyse and interpret what their automatism means. Surrealism can be interpreted in several ways and there is no right or wrong. I want visitors to interpret my collection in their own ways. I also hope the exhibition will encourage aspiring photographers to tell their stories in their own individual styles," she said.

The first photo at the exhibition entrance has no title. Through a window frame, visitors can see two models standing next to each other in a garden. The window frame splits the photo in half, portraying two models standing on different sides. Namoh said this photo came from her idea to balance positive and negative things in the world. 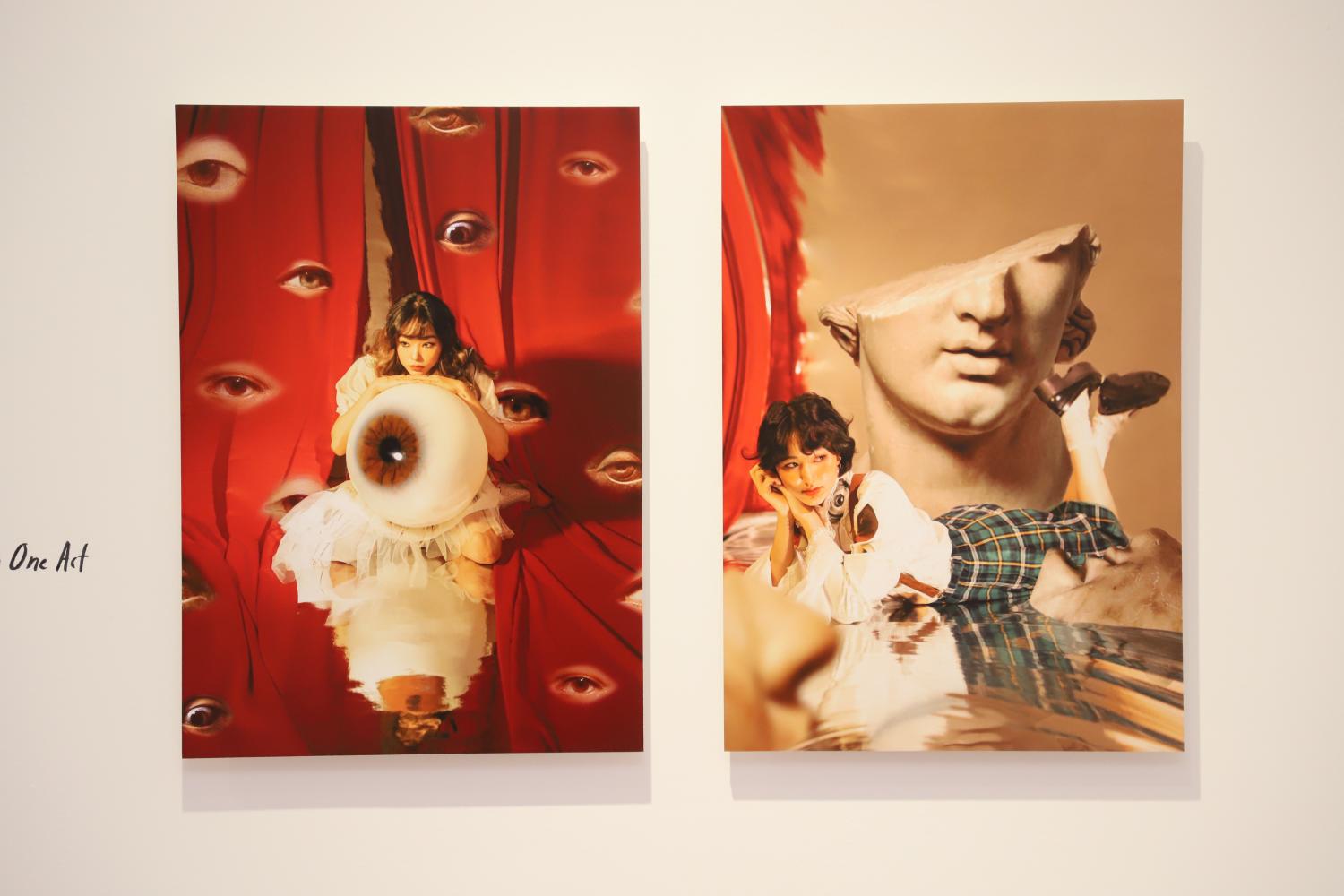 Everyday, A Play In One Act. Left is front stage, right is backstage.

"I read the book Utopia and felt that the world is cruel. I dreamed to create a beautiful world with equality, so I read many theories about world building. I discovered that no theory can build a perfect world. As a result, people have to balance the positive and the negative. This photo was inspired by the yin and yang concept, so the two models pose to make a balance in the photo," Namoh said.

One of the photo highlights is The Narrator, which features three photos of a shepherd and sheep. The Narrator was inspired by the book, The Alchemist, which is a story of a shepherd who gives up his flock of sheep to chase his ultimate dream.

"I created a shawl that has texts from the book. A sheep can be a symbol of several things. It can be a burden that is difficult to let go or it can be a dream," Namoh explained.

In addition to photos, Lunchbox is a set of three captivating videos inspired by Namoh's experience during her lunchtime in Mount Douglas Secondary School in Canada. 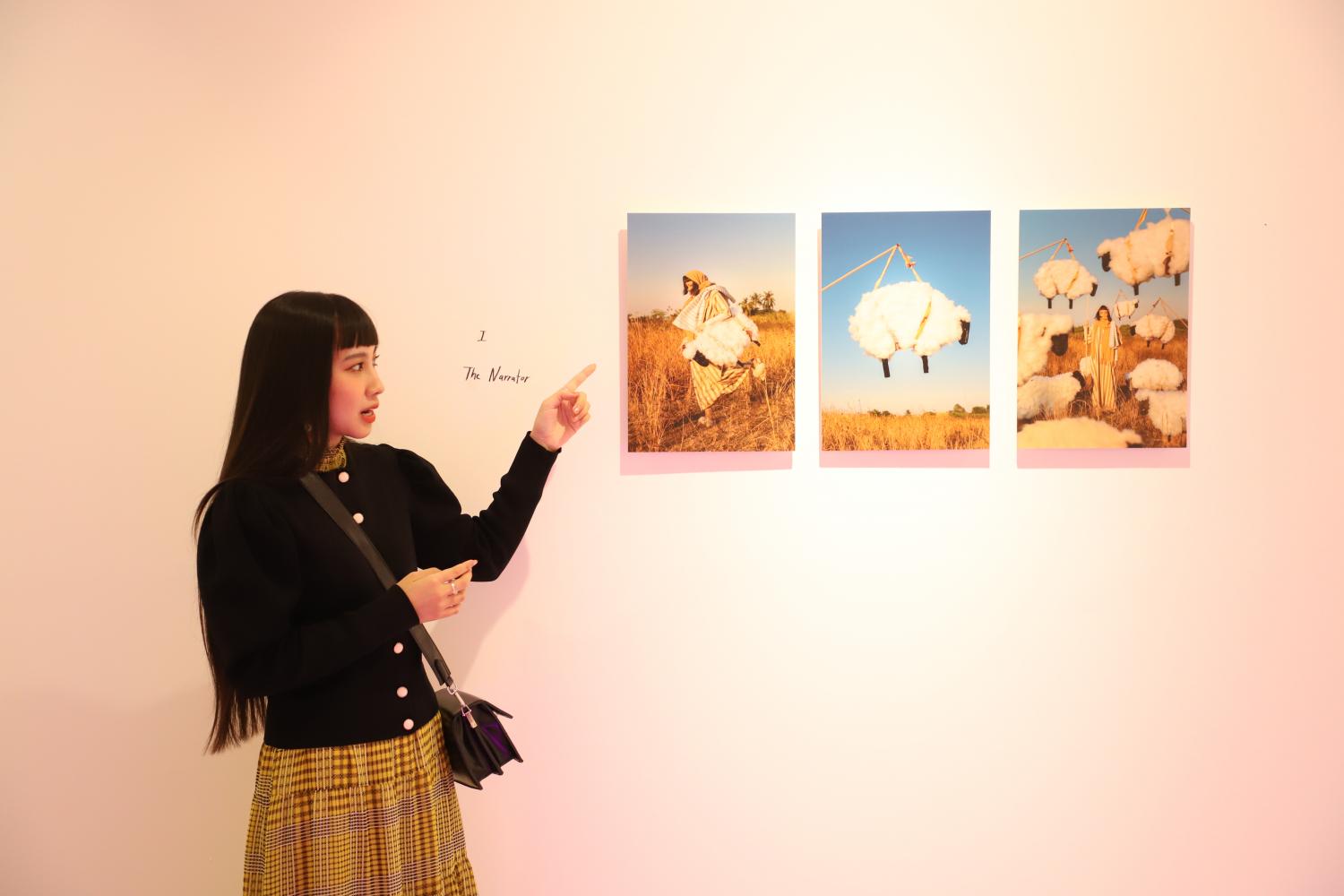 The Narrator was inspired by the book, The Alchemist.

"During secondary school, I had many international friends including Chinese, Colombian, Japanese, Italian and Korean. When we had lunch, everyone brought their comfort food to the table. While my Japanese friend brought a bento, my Korean friend had her kimbap and my Chinese friend brought his noodles. Their lunchboxes reflected their cultural backgrounds and where they came from. The diverse culture impacted me, so I created the videos," she said.

This 23-year-old photographer recently graduated with a bachelor's in Performance Design and Practice from Central Saint Martins, UK. One of her videos, The Kitchen Hierarchy, available at nqmoh.com, was an official selection at several film festivals including the "2021 Official Selection in London Indie Short Festival" and "2021 Official Selection in Independent Shorts Awards (US)". 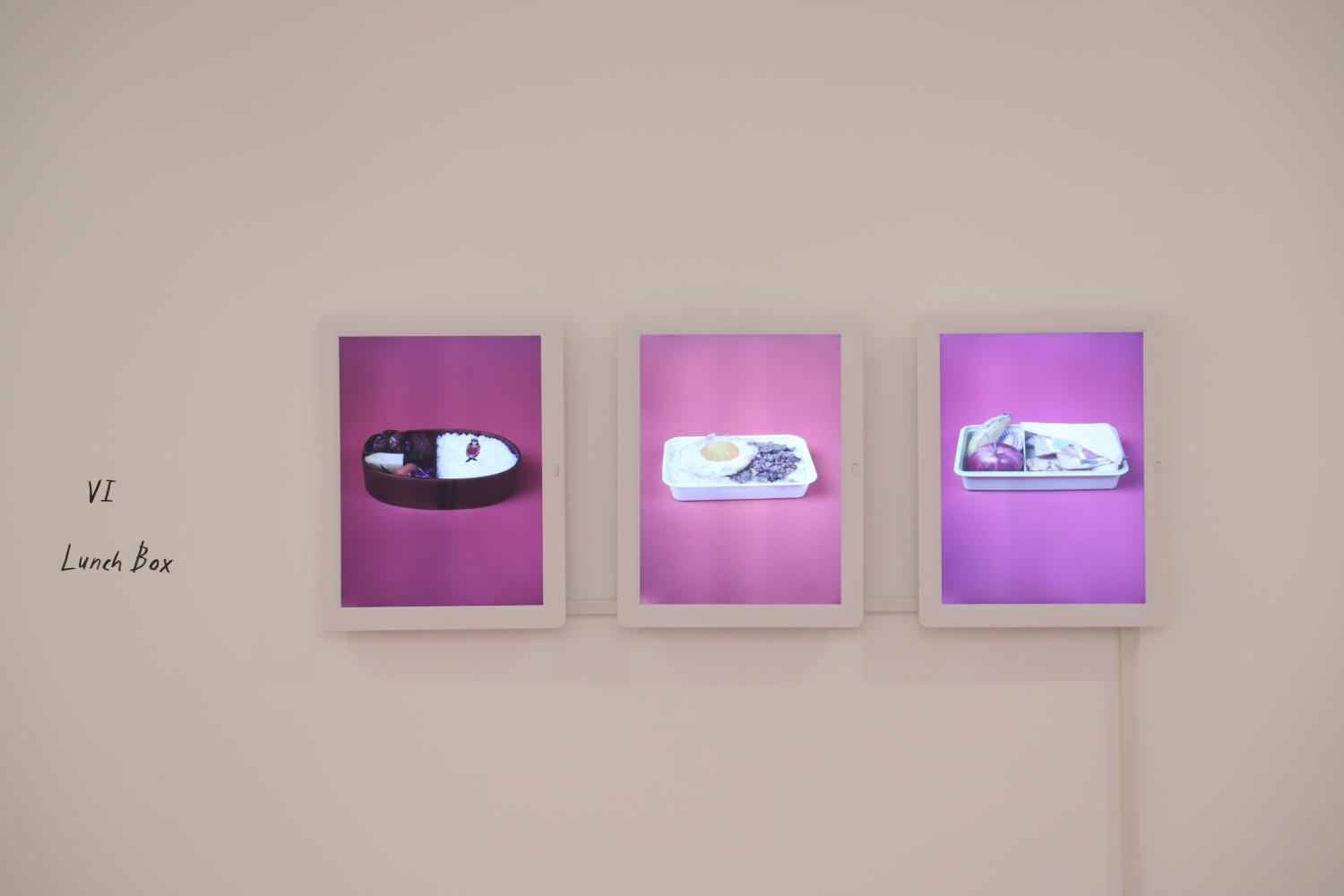 "Soviet Montage is an editing technique from the civil war in the Soviet Union. Due to the war, there was a shortage of films. Filmmakers had to reuse various footage to create a new movie. One of the techniques was to use a scene of a man staring at the camera and the next scene is a bowl of soup. This can convey that the man is hungry. However, if using the same scene of the man and the second scene switches to a sexy woman, it can be interpreted that the man has sexual desire. In The Kitchen Hierarchy, I experimented by using all kinds of Soviet Montage theories," Namoh said.

"I created The Kitchen Hierarchy at a time when I was feeling offended about inequality issues. I felt it was unfair that people were treated differently due to their race and social status. I chose to tell a story in a kitchen because there is kitchen hierarchy from head chef, sous chef to dishwasher. The dishwasher in the film looks up to the head chef. He is naïve to dream about being the head chef since some dreams cannot come true due to inequality," she said.

As a new graduate, Namoh is still figuring out her future path, so for the moment, she is satisfied with her solo exhibition. 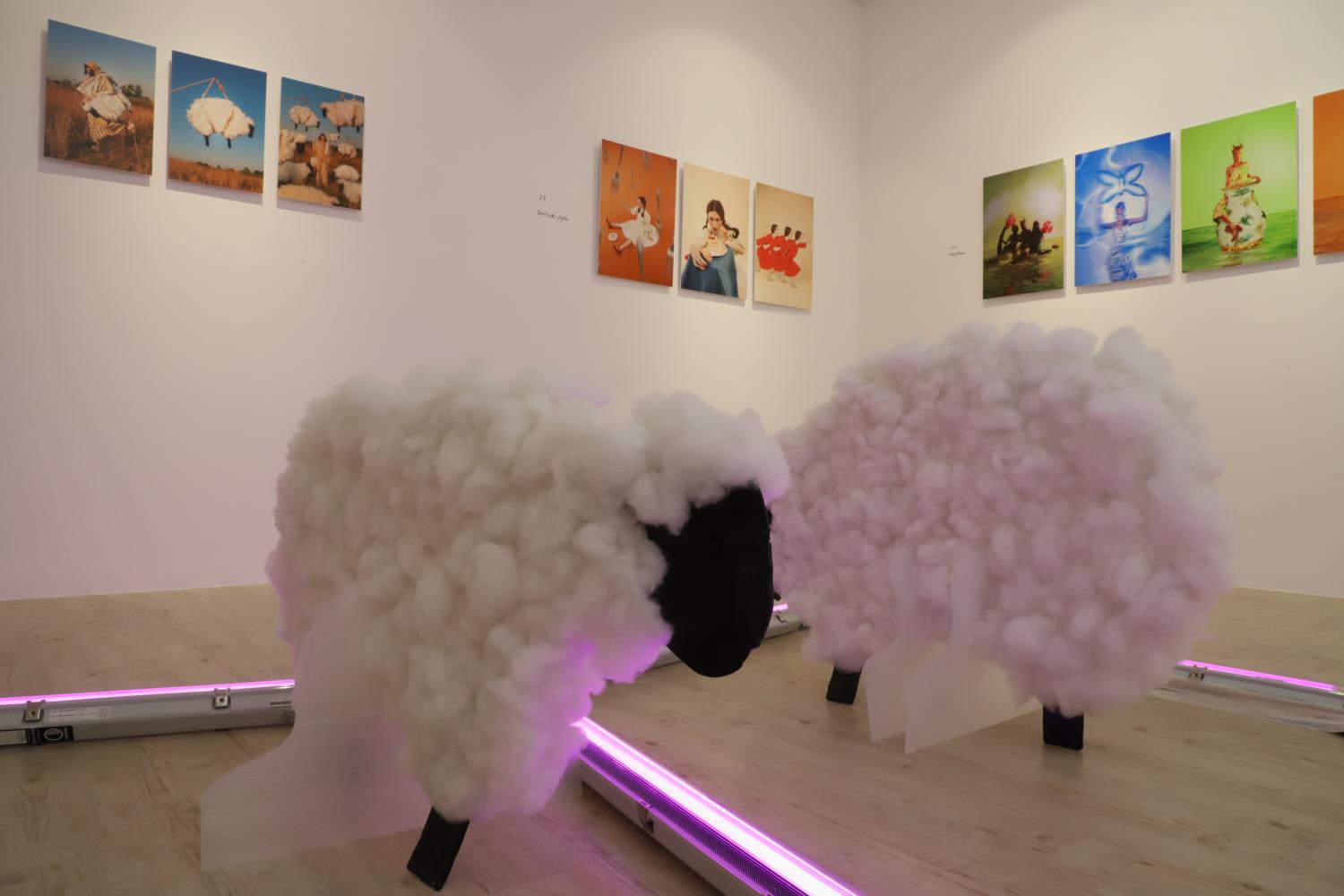 "I did not expect to have the exhibition, so I am happy to gain this kind of experience. When I saw my photos that I used to keep as digital files right in front of me, it was a worthwhile experience," she said.

After living abroad for many years, Namoh returned to Thailand where she found that the art industry has grown.

"I was at Bangkok Design Week and discovered many art enthusiasts there. The art industry has expanded, but it is still limited in some areas. When I was in Japan and South Korea, I felt that art was blended into the cities there. It became part of their daily life. I hope Bangkok will eventually be like them," said Namoh.