The significance of the Southeast Asian (SEA) Games for Thai athletes varies from person to person. For Thai-American Trecia Roberts, a former national 100m hurdles star-turned-coach, it launched her dream to have Thai athletics represented at the Olympics -- a tribute to the nation her mother is from.

It was at the 1999 SEA Games in Brunei where she made her debut in the Thai national colours and where she clinched gold and silver medals. She was later dubbed the female Tiger Woods of Thai athletics.

In her decade-long stint with the national athletics team, she became the first Thai athlete to reach the 100m hurdles semi-finals at the 2000 Sydney Olympics, a feat she is proud to have achieved through hard work and determination. A string of podium performances in both the Asian and world championships followed.

Roberts was recruited for the Thai national team while in her mid-20s and brought home a total of five gold medals from the SEA Games alone.

Life caught up with the 51-year-old days before the national athletics team's departure for the 31st SEA Games in Hanoi, Vietnam, running until May 23. The sports event was initially scheduled for November to December last year but was postponed because of Covid-19.

Passing on a wealth of knowledge to a new generation of hurdlers, Roberts has continued to shine as a coach, working on both the mental and technical game for athletes for over two decades -- the first 10 of which she also competed.

The biannual multi-sport event, while a low-ranking meet in comparison to other world-class tournaments, brings back a flood of memories for her.

"I won my first gold medal for Thailand in the 100m hurdles at my first SEA Games [in Brunei] and a silver in the 100m sprint," said Roberts." I grew up in Colorado and played competitively both in high school and university, so I was both excited and nervous about the event as I had never heard about the SEA Games at the time. 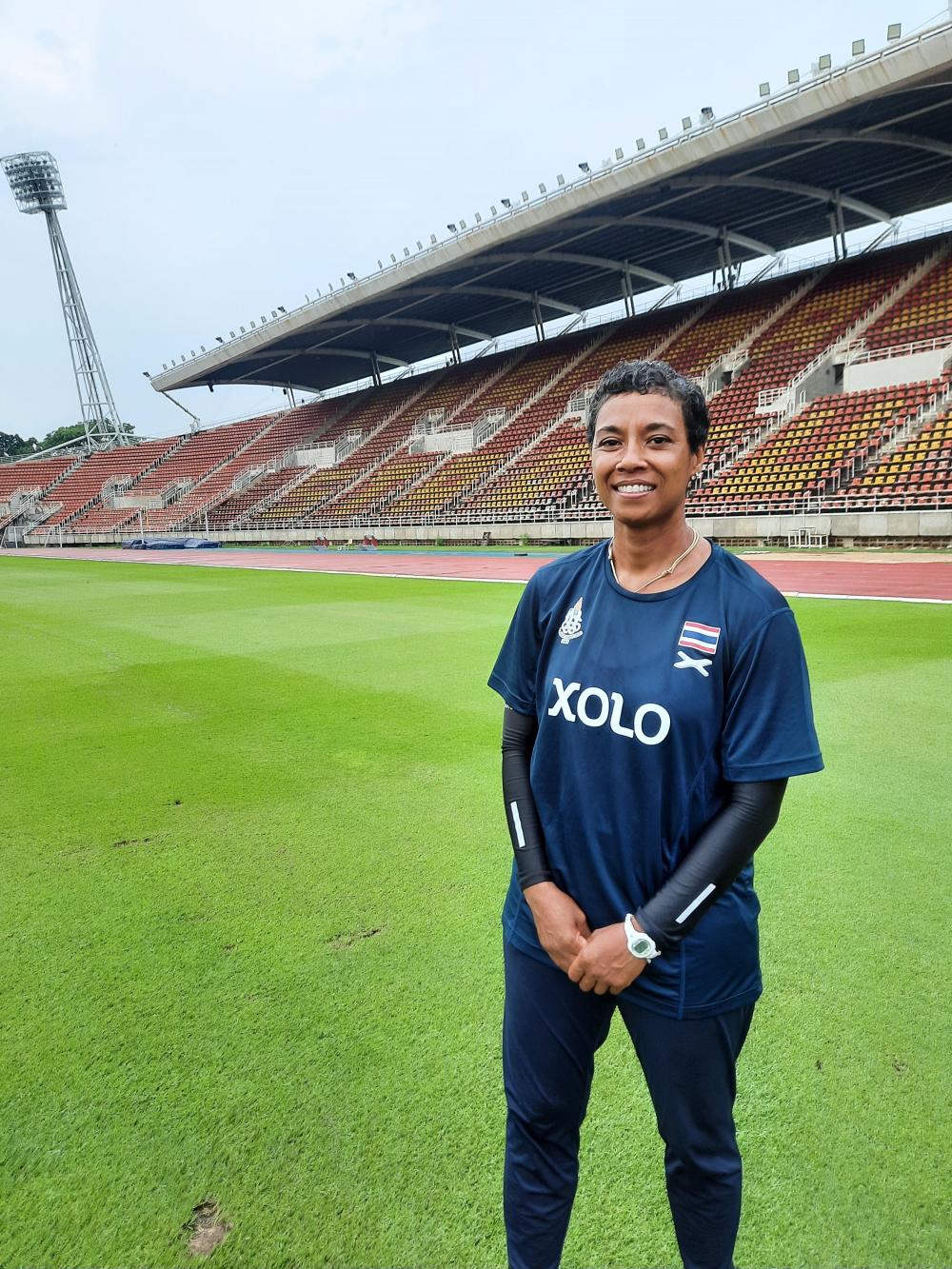 "I only knew the Vietnamese runner as she was my training partner in the US, so I wondered if there was anyone else. The SEA Games were new to me so I did not know what to expect. During my time, the SEA Games, which in comparison to university meets in the US were considered low level, were not as competitive when it came to how fast the runners were clocking. Nevertheless, after my first experience, I knew what to expect when it came to competing under the Thai flag."

The focus for the Thai-American was always the Olympics.

Having never heard the Thailand team being announced during Olympic athletics events always made Roberts desire to become the first to change that.

Both her parents are avid sports enthusiasts and with their support and that of coaches Loren Seagrave, who was instrumental in bringing her to Thailand, and Joe Gentry, she became a formidable competitor.

Honing her skills to represent Thailand on the world stage came with blood, sweat and tears as she divided her time between the US and Thailand for training and competitions.

Getting accustomed to her new life as a national athlete initially came with its struggles, with the language barrier and food two issues she had to get used to.

Her teammates pitched in to teach her Thai while she reciprocated by teaching them English. However, there was a much greater demand for learning English among the athletes, so while the rest improved their English, Roberts' Thai proficiency dropped.

Roberts said that back in the old days, training for the SEA Games meant having to maximise whatever little they had to prepare themselves. 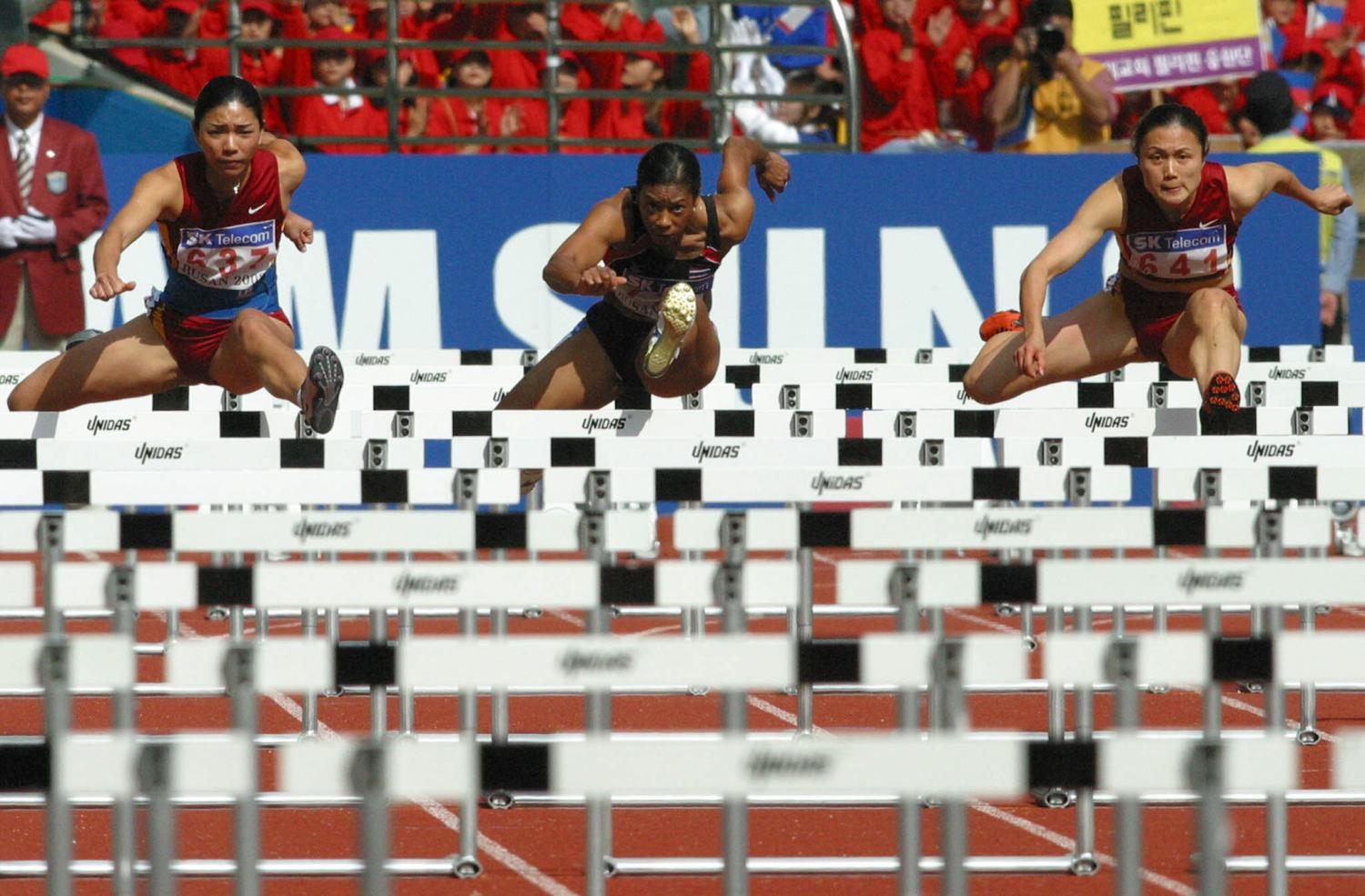 Roberts' determination to win has rubbed off on her students. (Photo: Sarot Meksophawannakul)

"At the time, we trained at the National Stadium which did not have a proper weight training area. What we had was a little room equipped with a few weights. The team had to scrape by with whatever we could find to train. Looking back, this was probably the hardest part for me to get used to [from my training in the US].

"I also found that hurdles I needed to train on were not in the best of shape. Some were in such poor condition that we needed to use sticks to make them stand. Equipment was below standard but we all worked hard despite these impediments."

Whenever the National Stadium was used for football matches, Roberts remembers how they had to shift to Thammasat Stadium for training, which was a long commute.

"Despite these shortcomings, everyone helped to assure our training was on schedule. It was a collective effort. Having the opportunity to return to the US a couple of months back then meant that I was able to hit the peak phase of my training [prior to the event]."

The perks of having dual citizenship helped Roberts compete on the international circuit, and have a manager and US sponsors on the journey.

She said it is only through competitive experience that one can develop as an athlete, and that training in itself does not cut it.

"The US has strong, competitive and motivated athletes because there is a huge focus on internal and external competitions," said Roberts. "As a coach, I have to motivate my athletes, so I arrange mock team meets, so we race each other. We need to organise more competitions in Thailand to have success."

As a US-certified coach, Roberts has the ultimate goal to see Thailand win on the world stage.

Working with local talent for her means building the character and mindset of a champion, which takes time and patience to achieve, she said.

"There is more stress and pressure being a coach, I don't sleep well," admitted Roberts when asked how the transition from athlete to full-time coach was for her. "And I thought being an athlete was hard. Being a coach is hands down hard, I find myself more tired because I am constantly working, sometimes even in my sleep. As a coach, I always update myself on what is around, always finding the solution to a problem my athlete might be facing. That is why for me being a coach mentally wears me down.

"I just want to make sure that my athletes are ready and that I have done everything possible to make them ready. My athletes need to realise they are on the battlefield when they compete, so there is no room for being soft. I put a lot of focus on developing the mindset, so I am also their mental coach.

"I believe in learning, that is why I attend several coaching clinics in the US and online. I also have a network of professional coaches that have played a huge part in my development as a coach. I can reach out to them with any problem."