published : 23 May 2022 at 04:30
newspaper section: Life
writer: Suwitcha Chaiyong
Outside In by Nattapol Komalarajun resembles a house.

To commemorate its 10th anniversary, the Museum of Contemporary Art (Moca Bangkok) is displaying "Future Shapes: Doodle Art Exhibition", which showcases the works of 13 young artists.

"Doodle art is a continuous aimless drawing that children often do on paper. It is an art form that does not require serious analytic thinking; it is a result of whatever comes to the artists' minds. Doodle art is naïve and straightforward. Since doodle art can be created by one pen and one piece of paper, people who are not artists can create doodle art as well. Young artists start from doodling before working on other kinds of art. Doodling is a fundamental basic of art," Kit said.

"Future shapes refers to future art and patterns, as well as the future of new generations who will be our representatives," Kit added.

The 13 artists, aged from five to 17, who were selected for the exhibition were scouted by Moca Bangkok's crew through social media. 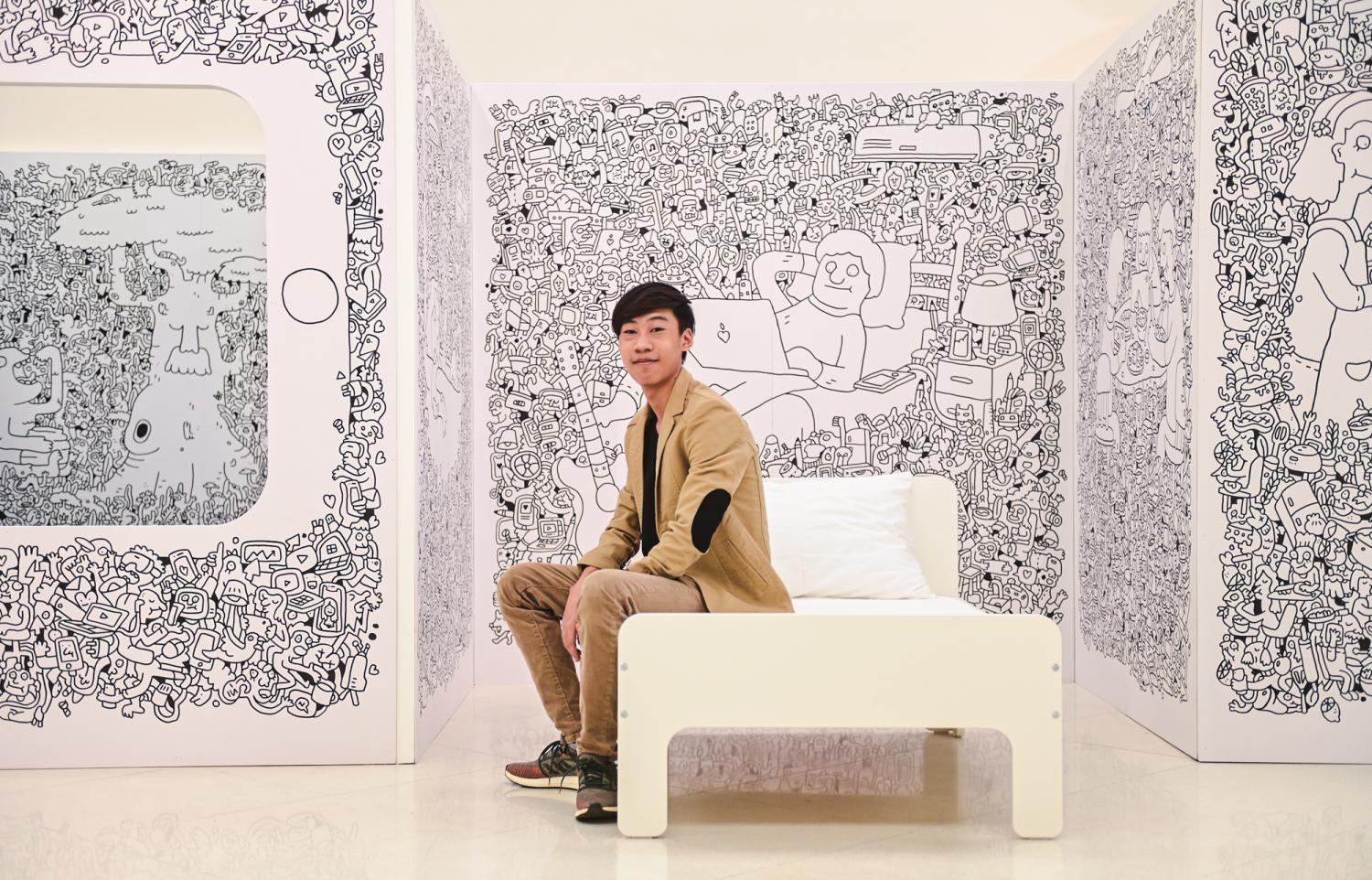 Nattapol Komalarajun and Outside In.

"We searched for captivating works that were appreciated by the public. We also considered the artists' diligence and determination. We watched how often they posted their work and their passion for doodling. The theme 'Future Shapes' is an open theme that allows young artists to express how they view the future. These young artists came up with several ideas. Many of their pieces are related to the environment. This means the new generation is interested in something beyond themselves," said Kit.

Among the 13 artists, two teenagers -- Nattapol "Kamo" Komalarajun and Wuttipat "Patart" Wongdee -- are part of the exhibition highlights. While Nattapol was the inspiration behind this exhibition, Wuttipat caught the eye of the Moca Bangkok crew due to his storytelling through art.

"I have seen Nattapol's works for several years. His works are easy to understand and he is able to adapt his doodling into exhibition concepts. Outside In is the largest work that he ever created. Our crew discovered Wuttipat while they were searching for teenage artists. Wuttipat's works are intriguing. He also works on NFT art, which fits into the new art world. He can doodle very quickly, so we gave him a large space from the floor to the ceiling," said Kit.

Nattapol, 17, is an award-winning artist who won his first national award at the age of nine. With solid support from his parents along with his hard work and talent, Nattapol was commissioned to illustrate many projects for national and international brands such as book covers, package designs, animations and mural paintings.

Nattapol said he was thrilled to be selected to be a part of 'Future Shapes', where he will display the 50m² Outside In.

"Moca Bangkok is a large gallery where I was inspired by artworks. I felt that it would be awesome to display my work at this gallery. The exhibition is unusual; I had never seen other galleries organise doodle art by young artists before," said Nattapol. 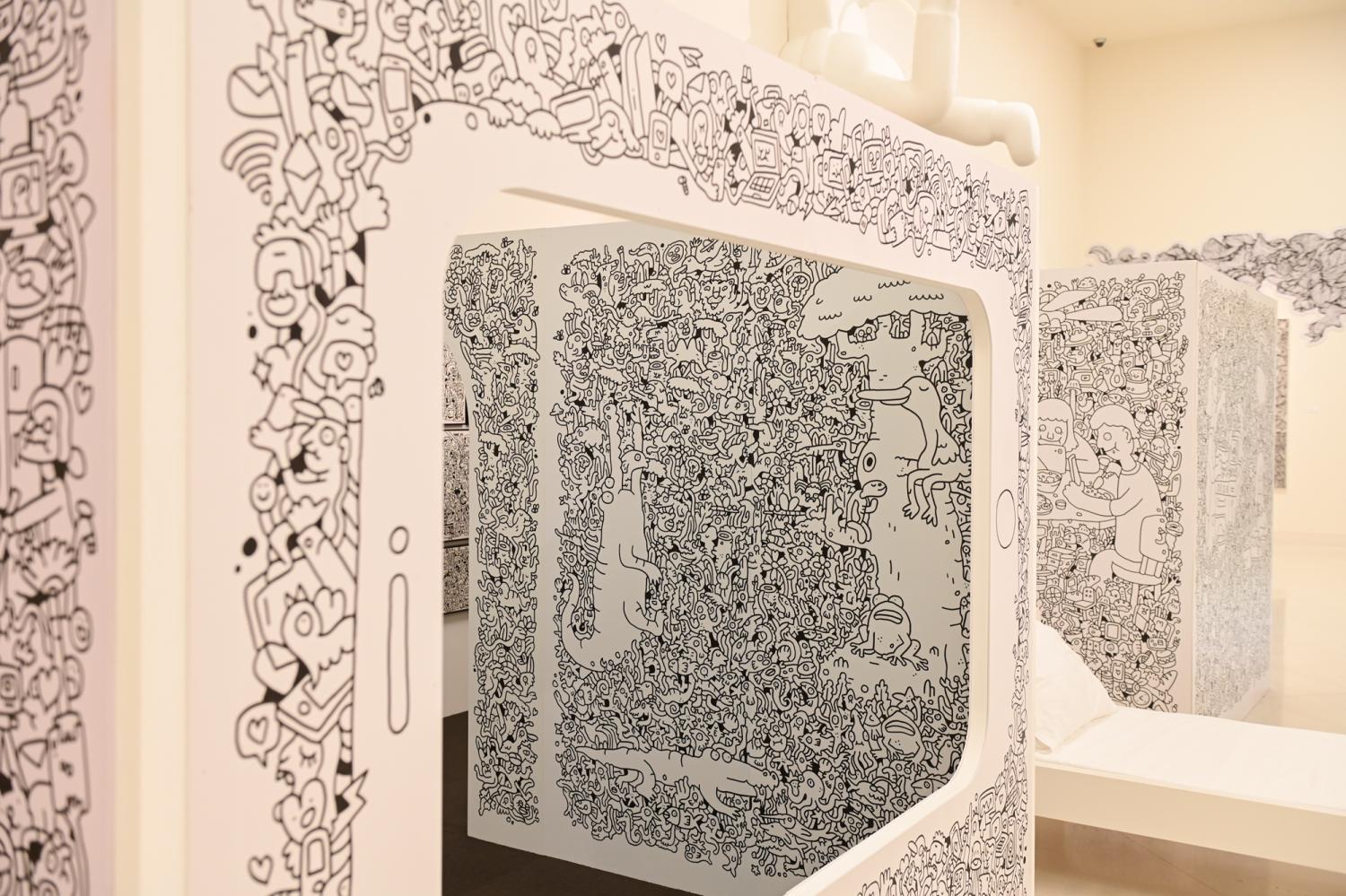 Born and raised in Khon Kaen, Wuttipat, 16, started working on doodle art last September. Due to his determination and creativity, his art caught the eye of the Moca Bangkok.

"I used to be addicted to games, but I wanted to change myself. I promised myself that I would draw at least one piece a day. I worked hard and the outcome was excellent," said Wuttipat.

Nattapol said his inspiration for his art pieces comes from his imagination. He wanted to see an installation that he could walk through, so he created Outside In, which resembles a house.

"Since the installation is called Outside In, the outer part of the installation portrays events that happen inside a house. In the midst of the pandemic, everyone spent time in their houses and learned what was happening in the outside world through their mobile phones. The images on the outside include rooms in a house such as a bathroom, a living room and a bedroom as well as family members. However, when viewers walk through the installation, they will see what people see on mobile phones such as a forest, a city and a spaceship. It is a reflection of modern life," Nattapol explained.

Wuttipat called his project Doodle Land, which is set 3,000 years in the future. The young artist used a space of 5m from floor to the ceiling to create the illustration New World War between the world we live in and a parallel world.

"In the future, there will be a parallel world that has higher technology than our world. However, the parallel world does not have nature or green spaces, so they invade our world. At 'Future Shapes', I showcase several pieces. Other illustrations depict five kings of five tribes who will try to protect our world," Wuttipat explained.

While the parents are proud of their children's artistic talents, they often worry about them pursuing it as a career. However, Wuttipat's father, Narongrit Wongdee, said he was happy to encourage Wuttipat to study art because it helped his son overcome an addiction to gaming. 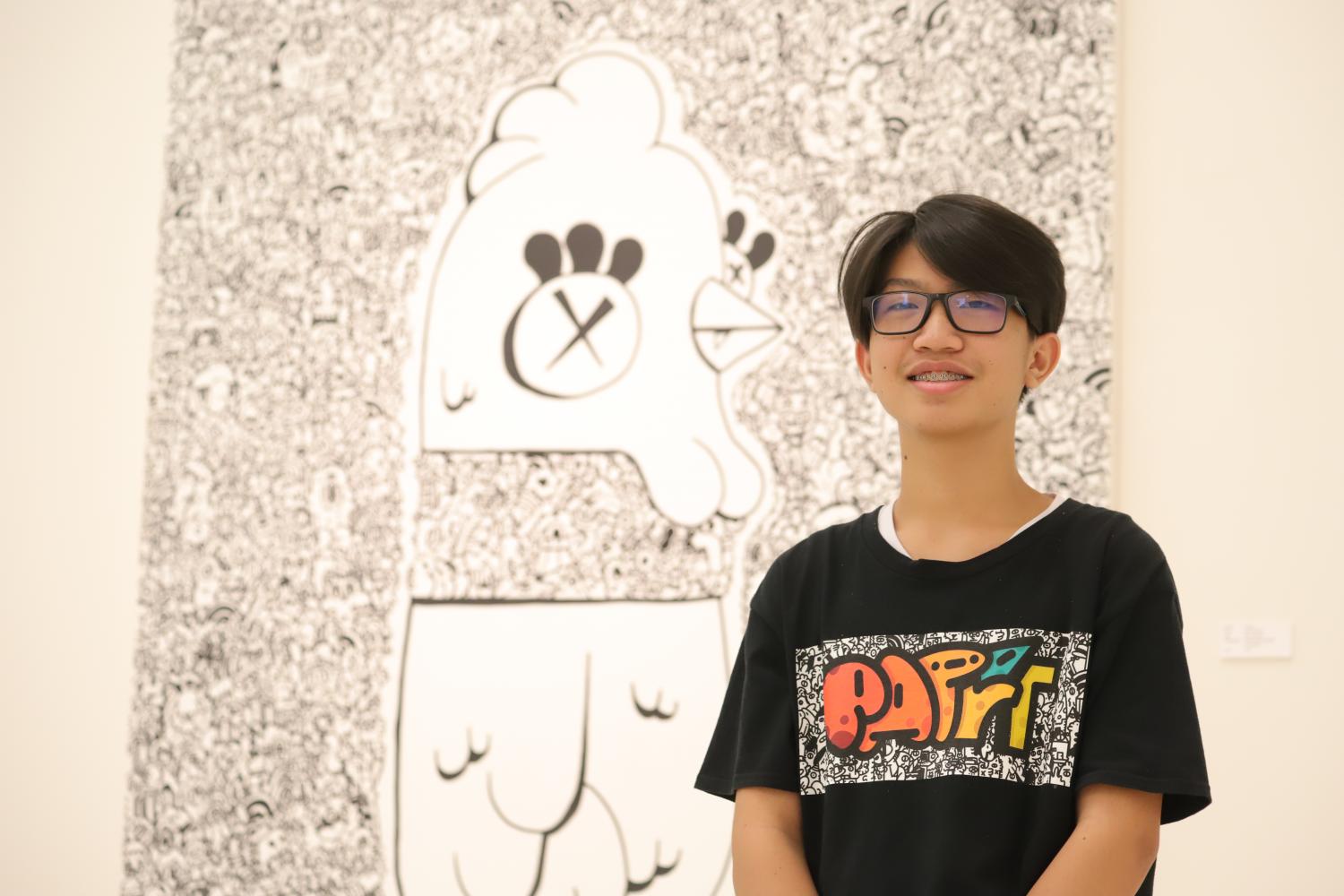 "He has always loved drawing. He still plays games for fun. I am not worried that he will struggle as an artist because there are many new careers, including NFTs. Wuttipat is happy to work on art and he can make money from NFT art," the father said.

Nattapol said he has felt complete since he finished his work and hopes to have people see it. Wuttipat said the exhibition helps people in his community in Khon Kaen to understand more about art.

"I used to be criticised by many people who felt I didn't pay enough attention to my studies. After my art pieces were exhibited and sold, they accepted me more," said Wuttipat.

The director of Moca Bangkok said he hopes parents will bring their children to the exhibition.

"'Future Shapes' aims to attract viewers of different ages. Visitors were amazed to see the work of a five-year-old who can draw fantastically. I hope families will be inspired by the exhibition, maybe even to create their own art," Kit said. 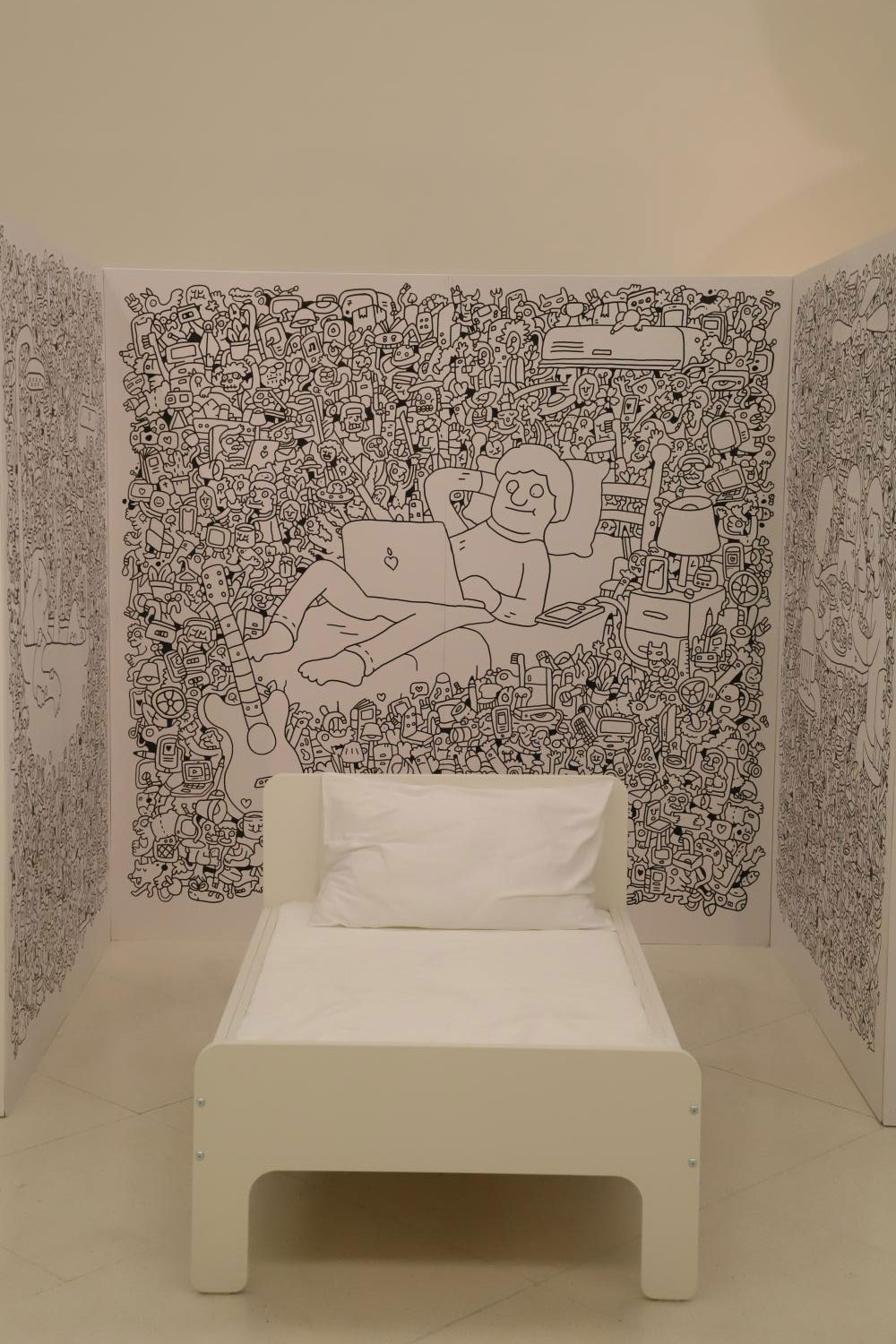 Outside In by Nattapol Komalarajun resembles a house. 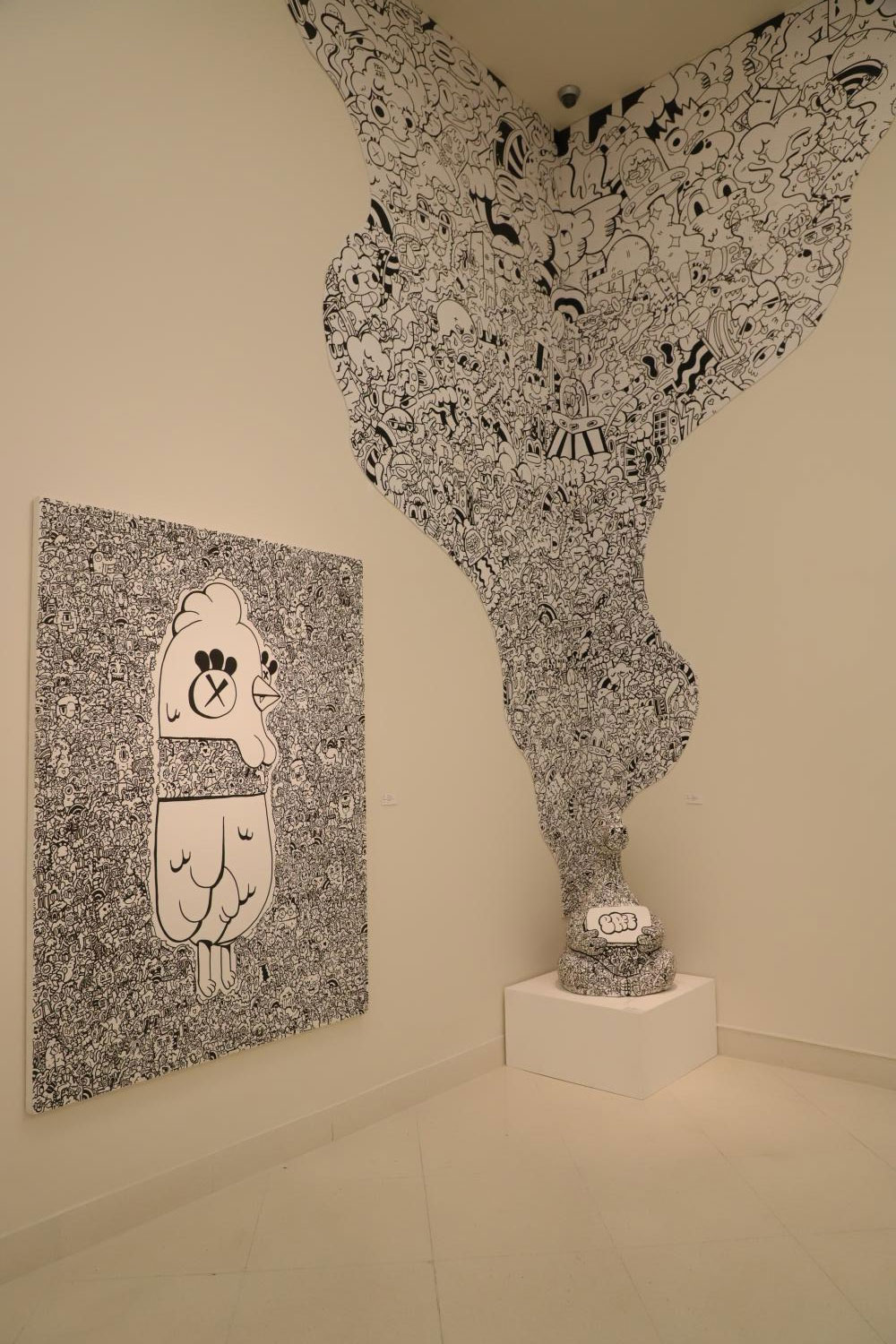 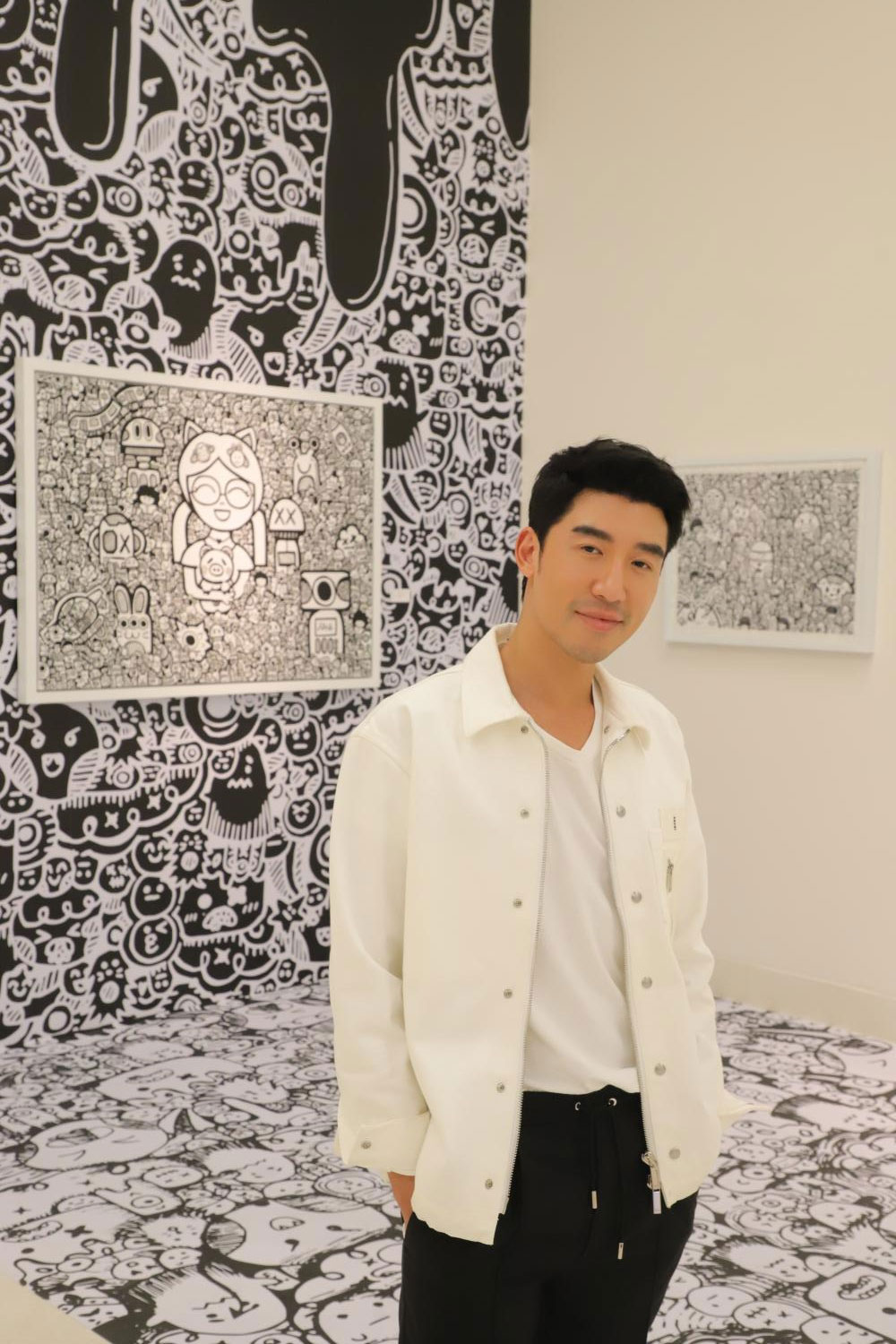 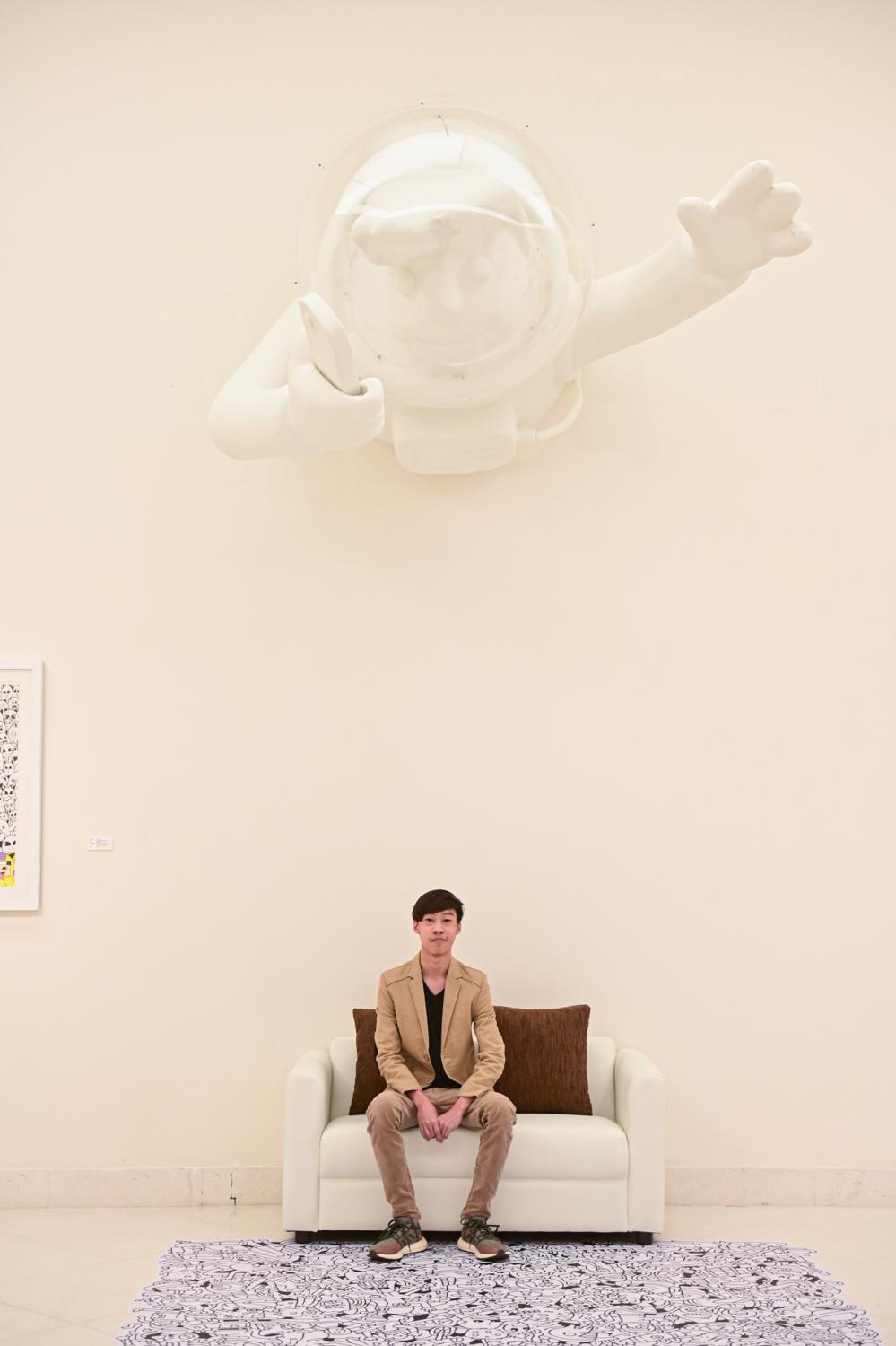