If you’re in the baking business, you may have heard of Schmidt & Co, one of Thailand’s renowned importers. The company has taken a step further into the baking world and has opened Never Mind, the Germany bakery on Sukhumvit 48.

The name tells a little story of the company’s founder, Max Schmidt, who named his home bar Never Mind. While back in the day, Never Mind catered to Max’s friends, family and business partners, his granddaughter Tina opened Never Mind for everyone. Though Schmidt has been in the business for more than 60 years, the thought of opening a bakery was never on the company’s list of things to do, “simply because we did not want to compete with our customers,” says Tina.

“Our focus was purely on distribution, even though we’ve been asked many times to do a joint venture. When our 60th anniversary was cancelled due to Covid, we revisited the idea of opening a German bakery, since we were proud of our history and its founder. Never Mind, the German bakery is a little memorial to him, honouring his Thai wife and him,” adds Tina. 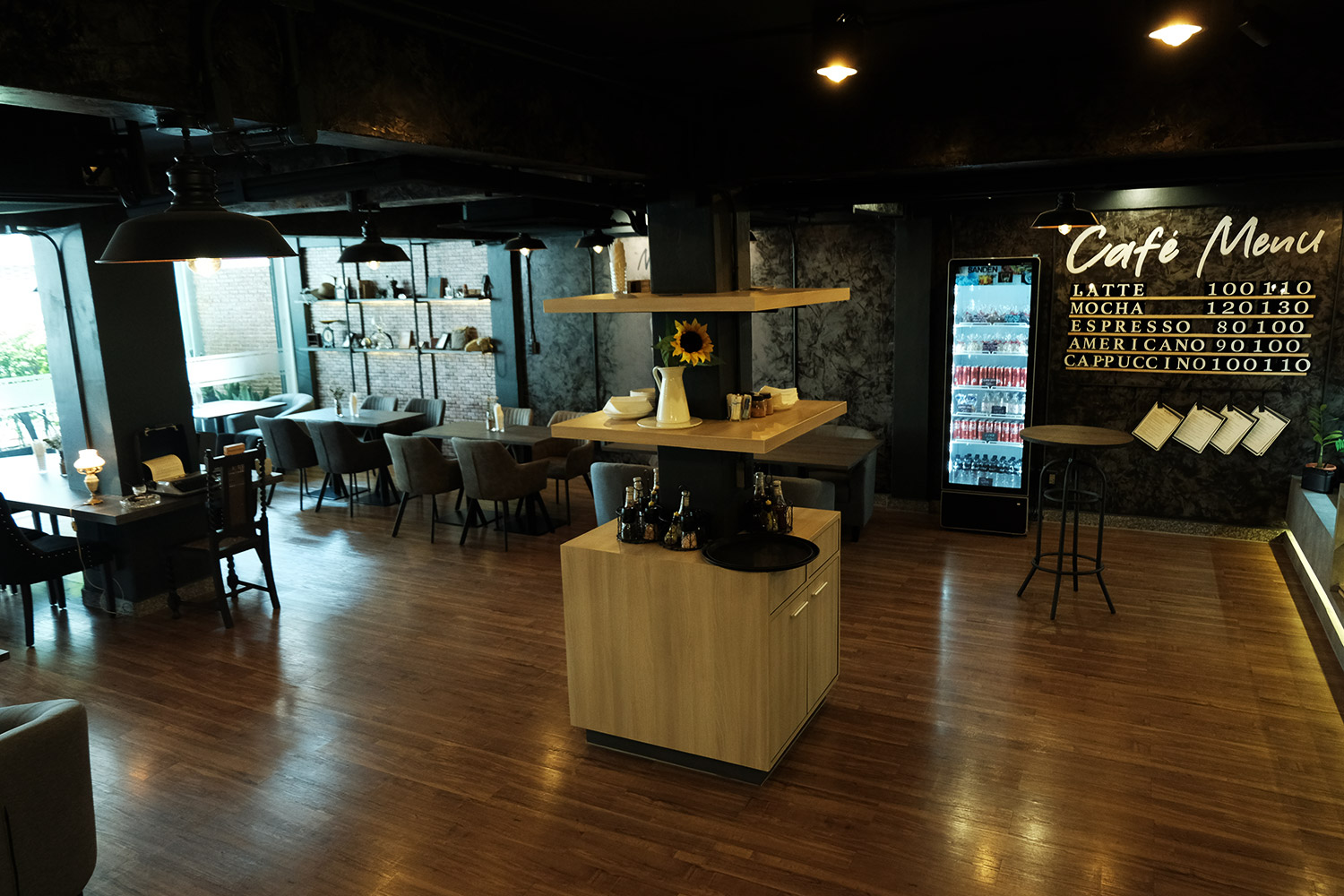 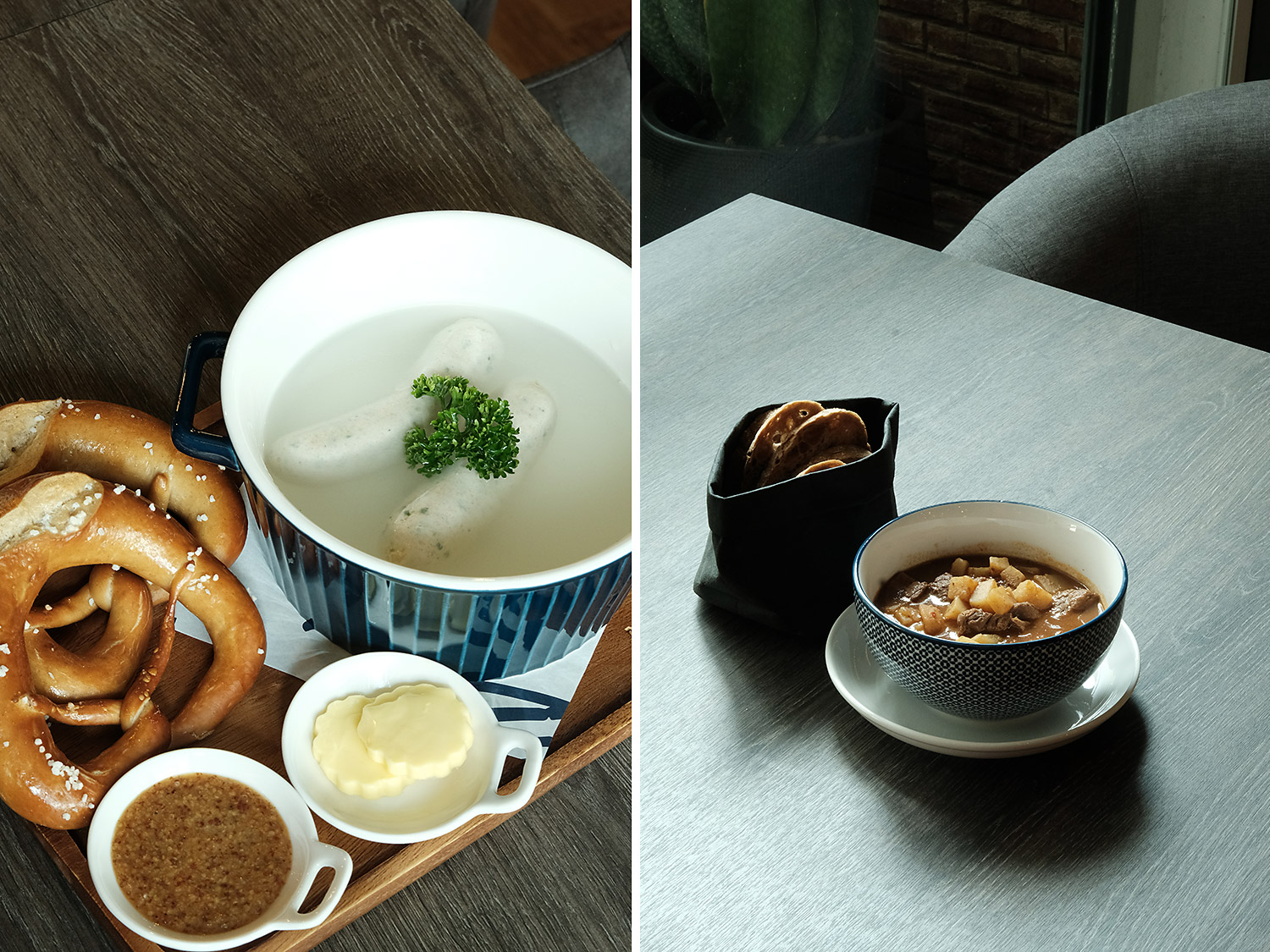 Never Mind specialises in  baked produces and pastries that one would find in bakeries back in Germany. All the goods are from family recipes. “We don’t rely on any other recipes but what our families use at home. Most of them are generational handwritten recipes,” says Tina.

At Never Mind, not only is the old-fashioned way of baking honoured, serving sizes are German, too. The most well-known German pastry export is the Black Forest cake or Schwarzwalder kirschtorte (B195) and at Never Mind a slice feeds a minimum of two, though if don’t want to share it would be a meal, be warned. The Oma’s (grandmother’s) cheesecake (B185) is more of a wedge than a slice. No one wants to be stung by bees, but you’re gonna want this Bee sting or Bienenstich (B145), which is a German staple and is a custard-filled almond cake with caramelised nuts on top. If you’re looking for small bites (pun intended), try the Snickers bar muffin or the Rum ball muffin (B95). The Cherry and Apple Danishes (B90) are also small in comparison to the cakes. Weekends have special cakes on offer, too.

Though not really German, croissants are a staple in any German bakery, where they are also called hõrnchen or little horns. At Never Mind, there are a minimum of four on offer daily. Two of my favourites are the Swiss chocolate croissant (B110), which is a “lava” croissant, and the square-shaped Chocolate croissant (B85). If you’re a purist, there is a plain one (B70) and an almond one (B90). If you’re lucky, you may see the rare garlic one make an appearance. “I would love to have a ham and cheese one soon. But we are also thinking about other options like maybe play around with Thai and German flavours, like maybe have a croissant or a pretzel with butter and chilli,” adds Tina. 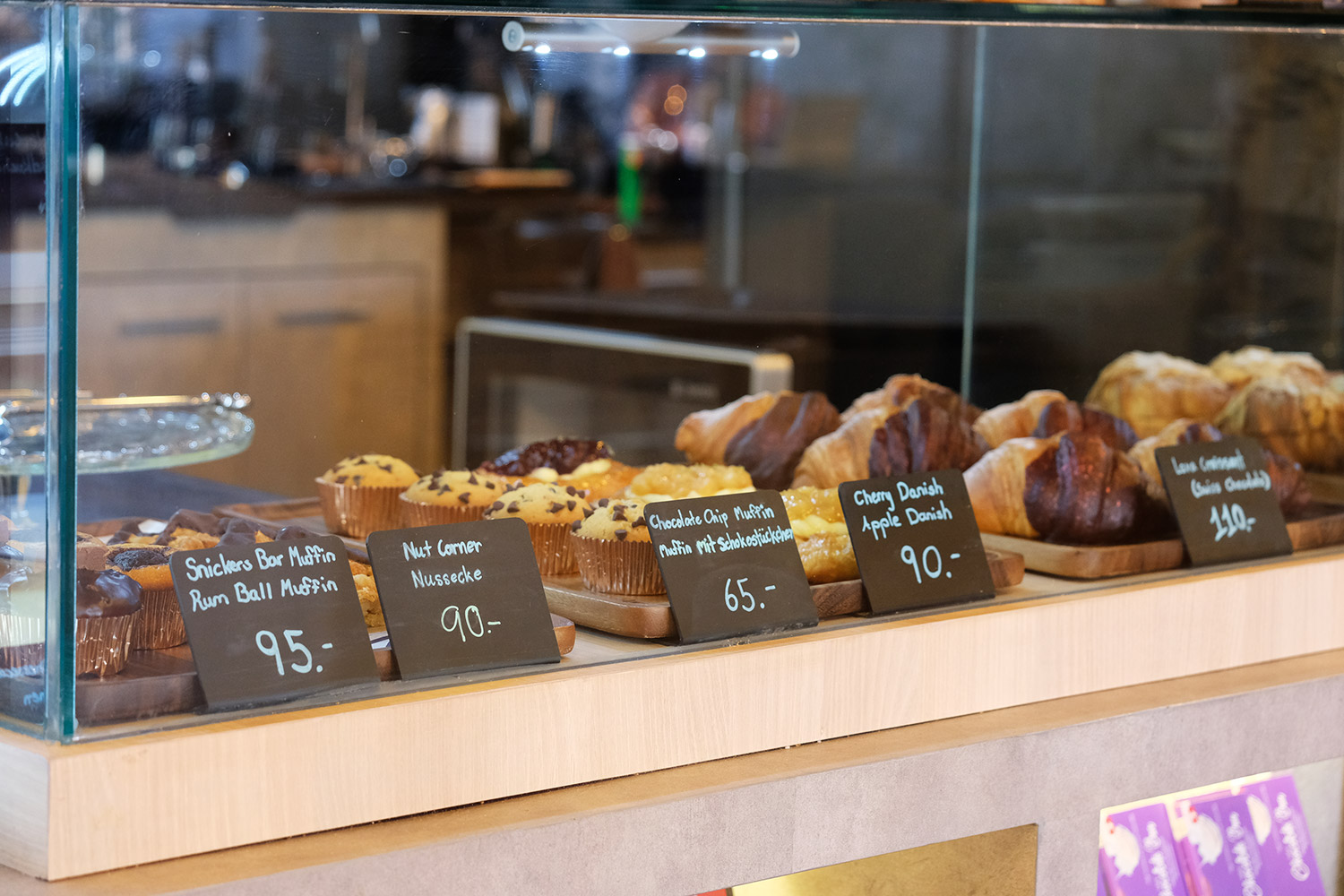 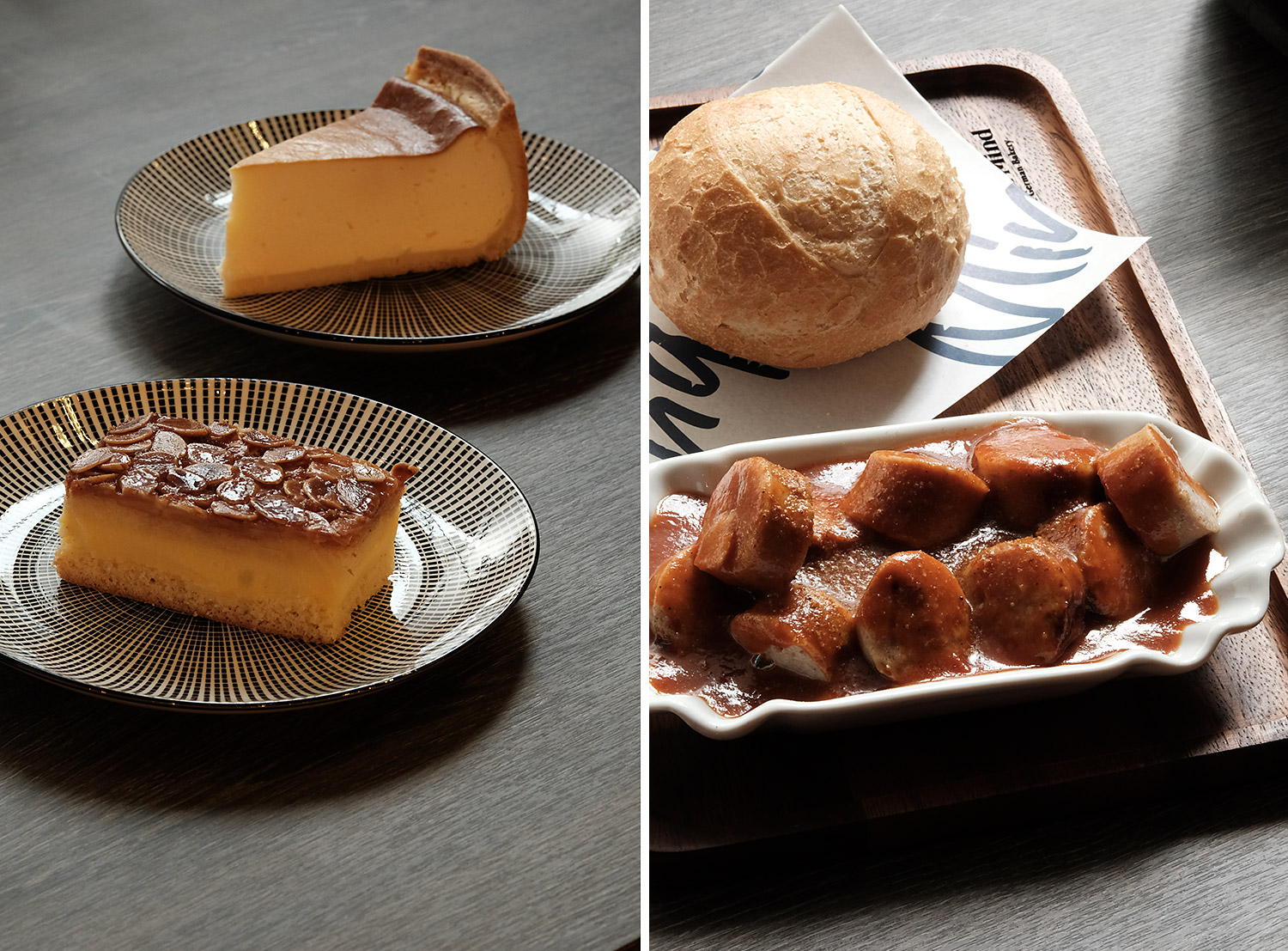 From left: The bee sting and Oma's cheesecake; Currywurst.

Though this bakery isn’t only about bread, get on a Flight To Munich (B250) for a a hearty German breakfast in the form of a weisswurst or German white sausage, served traditionally in a pot of hot water with a pretzel and Bavarian sweet mustard. If you’re not a white sausage person, try the Beef goulash (B280), which is a traditional German beef soup served with two slices of bread. Don’t forget the quintessential Currywurst (B210), which is German curry sausage with Never Mind’s sauce and a bread roll.

Another plan in the works is a “typical German Champagne breakfast”, which is a weekend treat with family or friends. “In Germany, such breakfasts are often with cheese and Nutella, eggs, bread rolls, a selection of cold cuts and accompaniments like marmalade, honey and chocolate. All this is enjoyed with a glass of Champagne or mimosas,” explains Tina.

Though if you’re a bread person like I am, do take your eyes off the cakes and look beyond. On the back display shelves, are nine or 10 kinds of bread. This display is very much like in Germany, where the cakes are first to hit the eye and then the bread. “The breads are classics like sourdough, baguettes and brochen [bread rolls], to the trendy Low carb [B215], since “healthy stuff is in demand now”, as Tina puts it. There is also a Vegan multiseeds bread [B225]. Pretzels and Lyle sticks (B55) are also on the shelves as it is the small ones that are popular with German kids as an after-school snack. There is also the Zopf or braided bread to try (B180). In bread heaven, anyone? 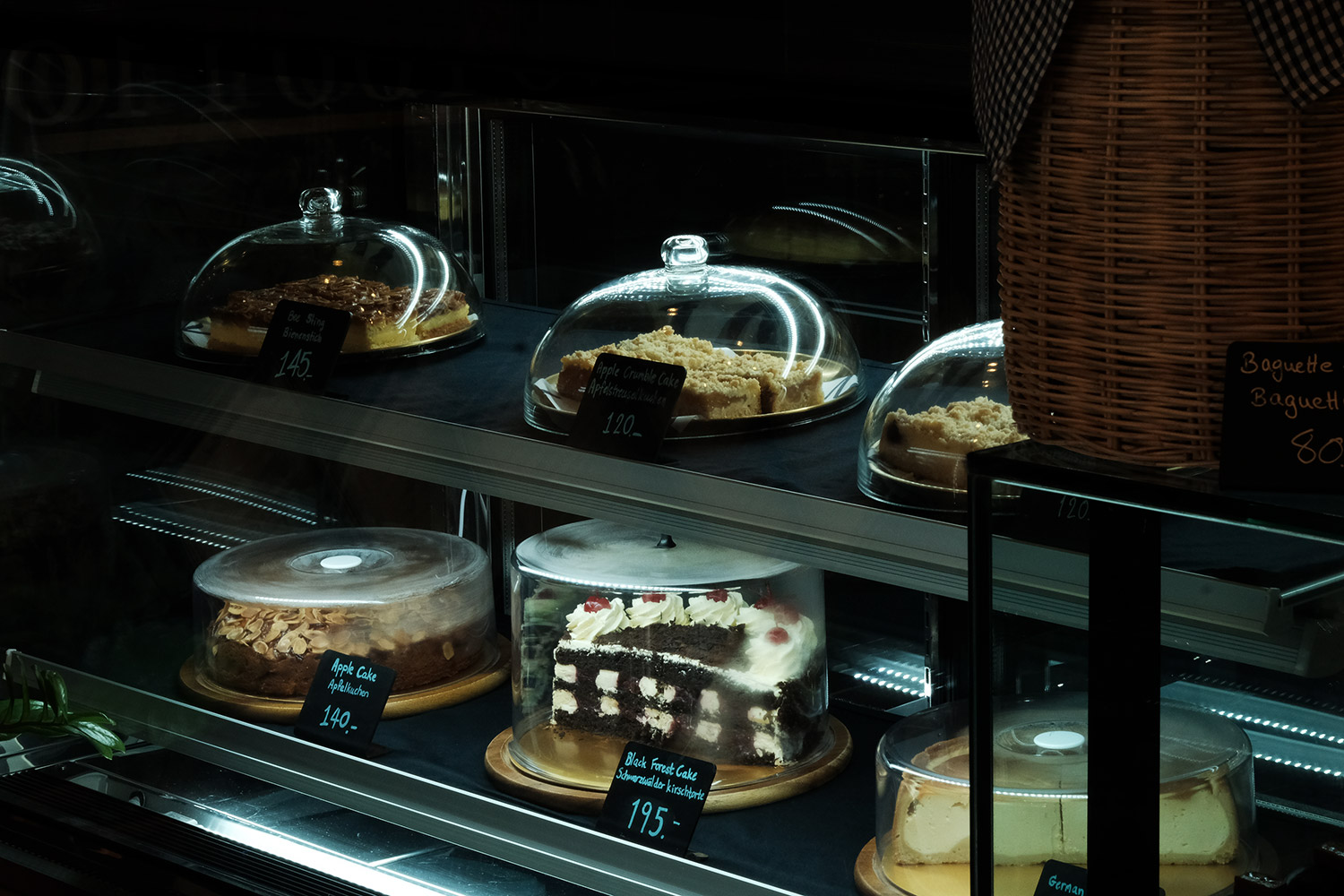 Another must-have item in a German bakery are pralines in white, milk and dark chocolate. “Our pralines are made in-house and come with Australian hand-cut almonds, which are roasted for five minutes before being added to the chocolate with raisins, lemon and orange peel,” explains Tina.

The best thing about Never Mind is that all the items on display are freshly baked daily. Nothing is carried over to the next day to ensure quality and freshness. The bakery opens Tuesday to Friday from 8am-5pm and on weekends from 9am-5pm. If you arrive around closing time, 5pm, you can buy them at a discounted price.

Never Mind is your neighbourhood bakery. It’s big, warm with friendly staff and a lovely place to wile the day away. It’s a place where you’re gonna want to give up that low-carb diet! Call 087=927-3388.