Diners are in control at Kintsugi, under the watchful eye of founder Jeff Ramsey

Last week was my second visit to Kintsugi since the progressive kaiseki restaurant by Michelin-starred chef Jeff Ramsey opened in 2019 at the Athenee Bangkok. 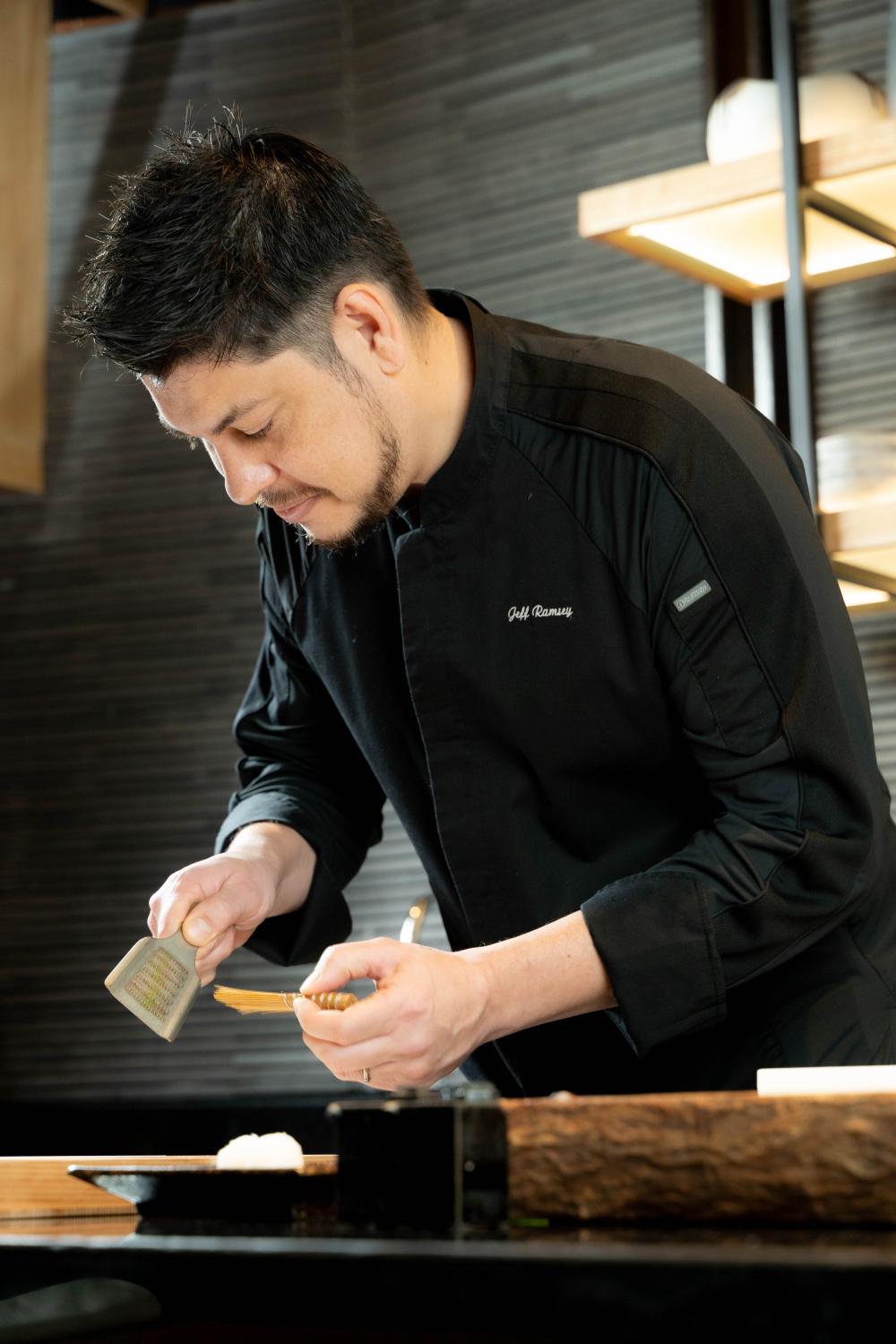 On that Saturday evening, the 60-seat establishment was impressively energised by a casual crowd of international diners.

As a loud tête-à-tête was heard from one of the private rooms, young couples and groups of friends were spotted at the sushi bar while families were occupying the sofa booths. It's just then that I began to realise the easygoing mood chef Ramsey had talked about.

He once said that at Kintsugi there should be no stiff rules, and, ideally, the menu is to be customised for the guests according to the best available produce of the day.

Adopting the undemanding omakase ("I leave it up to you") practice, Kintsugi at the same time aims to showcase the super refined and highly aesthetic kaiseki cooking.

The menu thus represents Ramsey's broad-minded and ever-evolving interpretation of Japanese haute cuisine. That is with inspiration from kintsugi, an art of embracing broken ceramics with gold and transforming the artefacts into something even more imaginative. 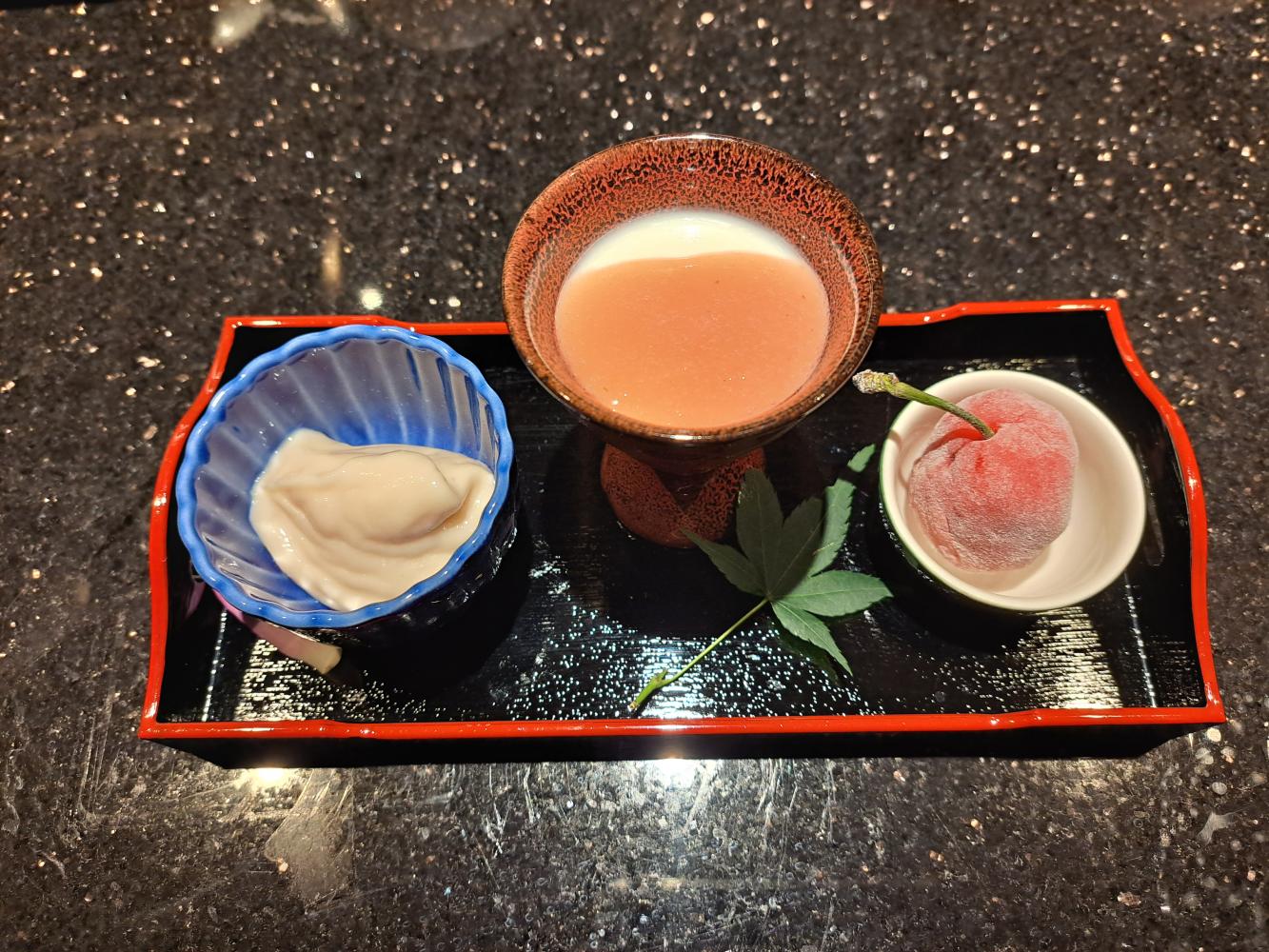 The assortment of summertime sweets.

Meals here are offered via options of a multi-course menu and selection of à la carte dishes that have been renewed every season.

I went for the top-flight signature option, which encompasses all the best-presented dishes prepared -- or generously touched up -- with the most premium ingredients.

A chilled cup of doburoku, a sweet and cloudy house-brewed aperitif made with the same ingredients as sake, gave a luscious kick-off to the meal as it fantastically enlivened the palate.

It was quickly followed by a platter of hassun, or seasonal-themed dishes.

Despite the small sizing and photogenically delicate presentation, each item exhibited a pleasant depth of flavours that was as much refreshing as it was lip-smacking.

Prime-grade sashimi arrived as the third course. There were the super juicy and fatty sweet slices of bluefin otoro topped with Royal Oscietra caviar; the supple and flavoursome slices of kampachi amberjack; the springy and translucent slices of madai sea bream; and scoops of the creamy sweet Murasaki uni sea urchin roe.

Next, a house-made silken tofu came with soy-marinated ikura (salmon roe), nanami (a condiment that consists of seven herbs), fresh shavings of katsuobushi (sun-dried cured tuna) and green yuzu zest. It's a unification of ingredients that resulted in umami flavour and interesting mouthfeel.

The firm-fleshed and full-flavoured kuro awabi, or "black sea-ear" abalone, which is at its peak during spring and summer time, was also selected as the menu highlight.

The sashimi-grade awabi was braised, sliced and served with its own liver sauce. Mixing the sushi rice, offered on the side, with the intense-flavour buttery sauce and you'll get your DIY version of "sharisotto", the sushi rice risotto. 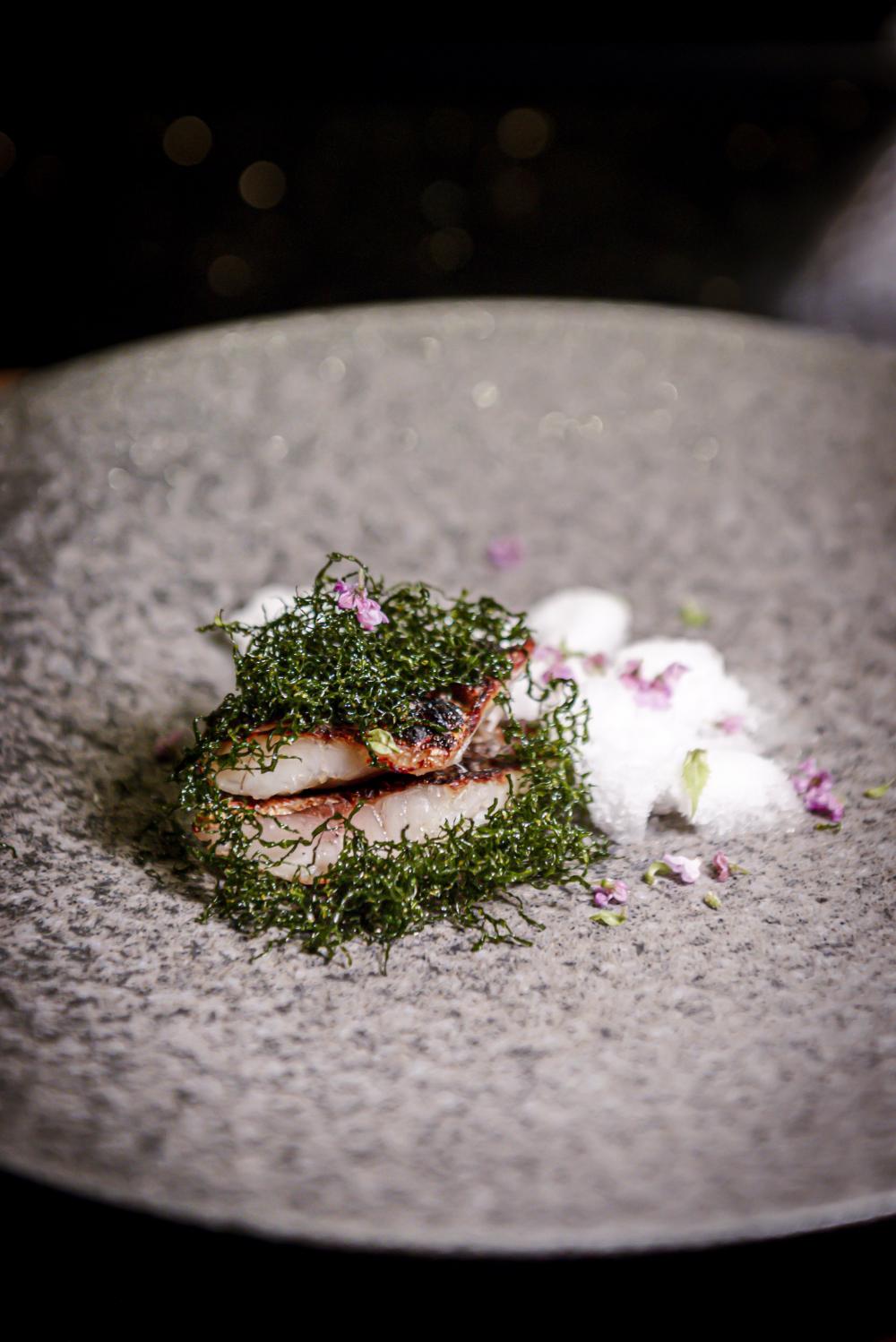 The kamasu barracuda with deep-fried oba leaves and a snow-like grated daikon.

The grilled dish was represented by flame-cooked kamasu barracuda topped with fluffy, but light, deep-fried oba leaves and a snow-like topping of grated daikon turnip.

Red tilefish spoke for the summer course. The white-meat fish is cooked two ways, with the meat braised in sweet soy sauce and the scale side pan-fried to give a brittle dash.

A first-rate Japanese meal, for me, wouldn't be complete without a presence of top-tier Japanese beef.

That night it was represented by the extraordinarily-marbled and heavenly tasting A5 Wagyu sirloin from Kagoshima, offered in a very expansive slice and gently cooked to perfection before us in a shabu shabu broth.

The glazed grilled eel was served with sushi rice and accented with sansho peppers, kinome and kinshi tamago.

Do keep room for dessert or else you would miss some of the summer menu's most indulgent treats.

Helming Kintsugi's kitchen and always entertaining the guests is the cordial and dexterous head chef Alvin Chew. Chew is a former sous chef of Babe, a world-famous restaurant by Jeff Ramsey in Kuala Lampur, Malaysia.