While the sunset lights the sky over Phuket and our car swirls down a mountainous long road to Carnival Magic, it is like we are travelling through a wizardly land straight out of a fairy tale.

Set against the beautiful backdrop of the white Kamala beach and the turquoise waters of the Andaman Sea, this new theme park welcomed its first visitors on Tuesday with a wide range of innovative attractions, the world's longest parade float and flashy light artworks that celebrate the beauty of Thai cultural heritage.

With a budget of 6.6 billion baht, this is the first Thai-style cultural theme park, illuminated with shimmering 40 million LED lights to bring colours to Kamala at night and create fresh holiday experiences for the upcoming high season.

"This new project builds upon Phuket FantaSea's 22 years of success as the ultimate Thai cultural theme park and we're ready for the next step. We expect Carnival Magic to become a new landmark on the island. As the Covid-19 situation has eased and tourists return, we hope to attract up to 2 million domestic and foreign tourists next year, which will help rebuild Phuket's economy," said Kittikorn Kewkacha, president and CEO of Phuket FantaSea and Carnival Magic. 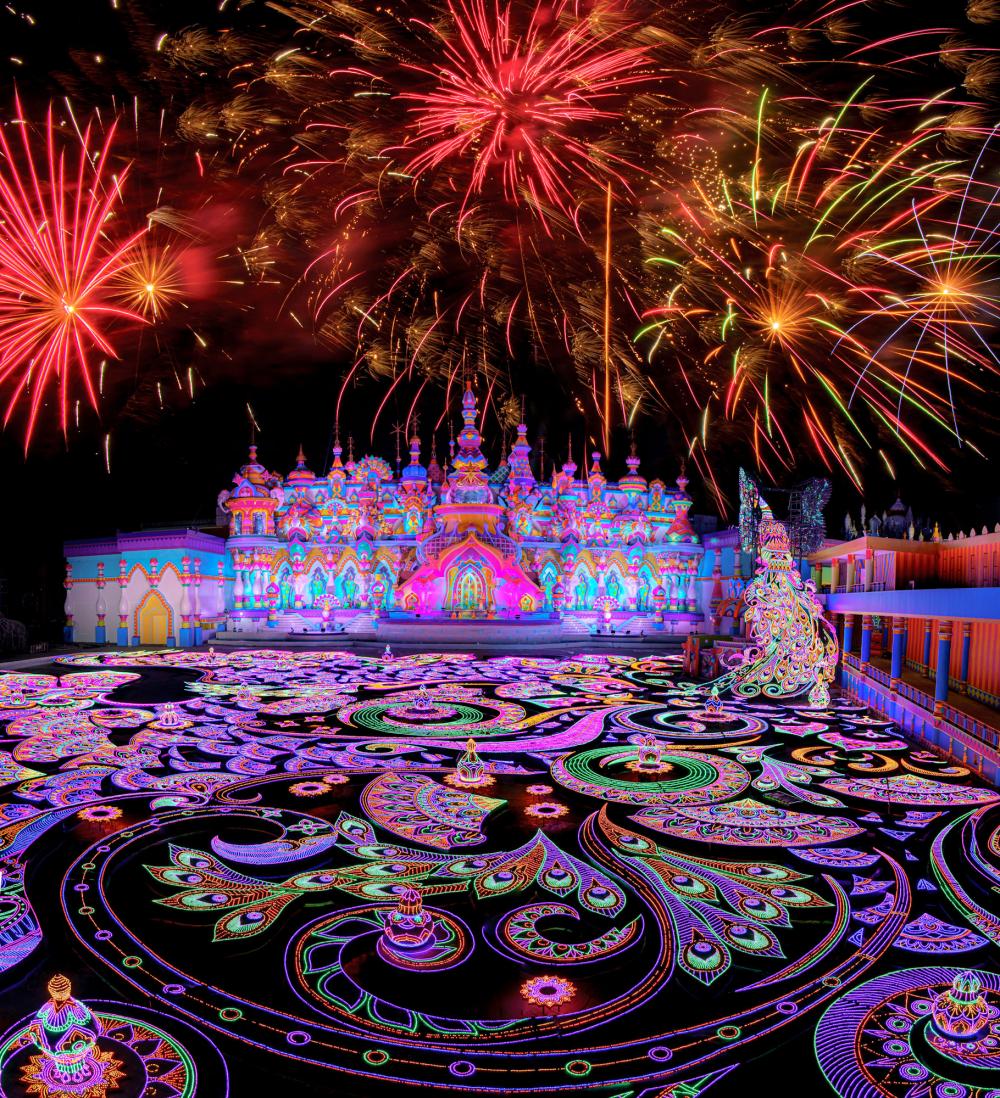 "Seventy percent of our customers are international tourists, with the remaining 30% being domestic visitors. We will primarily target travellers from India, China, Europe, Australia and the Middle East.

Standing adjacent to Phuket FantaSea, Carnival Magic occupies a 100-rai plot and promotes itself as "The Magic Kingdom of Lights", inspired by traditional Thai temple fairs and festivals such as the Loy Krathong festival and the wax candle procession in the northeastern region, relating to the spirits of water.

It is designed to resemble the fantastical land of happiness and lights ruled by Prince Kamala and populated by Thai cartoon characters. There are four main zones, each of which incorporates modern technology, visual effects and mythological characters to create a lively carnival atmosphere to transport visitors into a realm of fancy.

A wonderful tower of white elephant-like sculptures serves as a reception point, with information on the Carnival Fun Fair. We stroll down a bustling shopping street, inspecting a diverse array of refined handicrafts, colourful fashion accessories, vivid fancy costumes and other souvenirs amid a celebratory ambience. 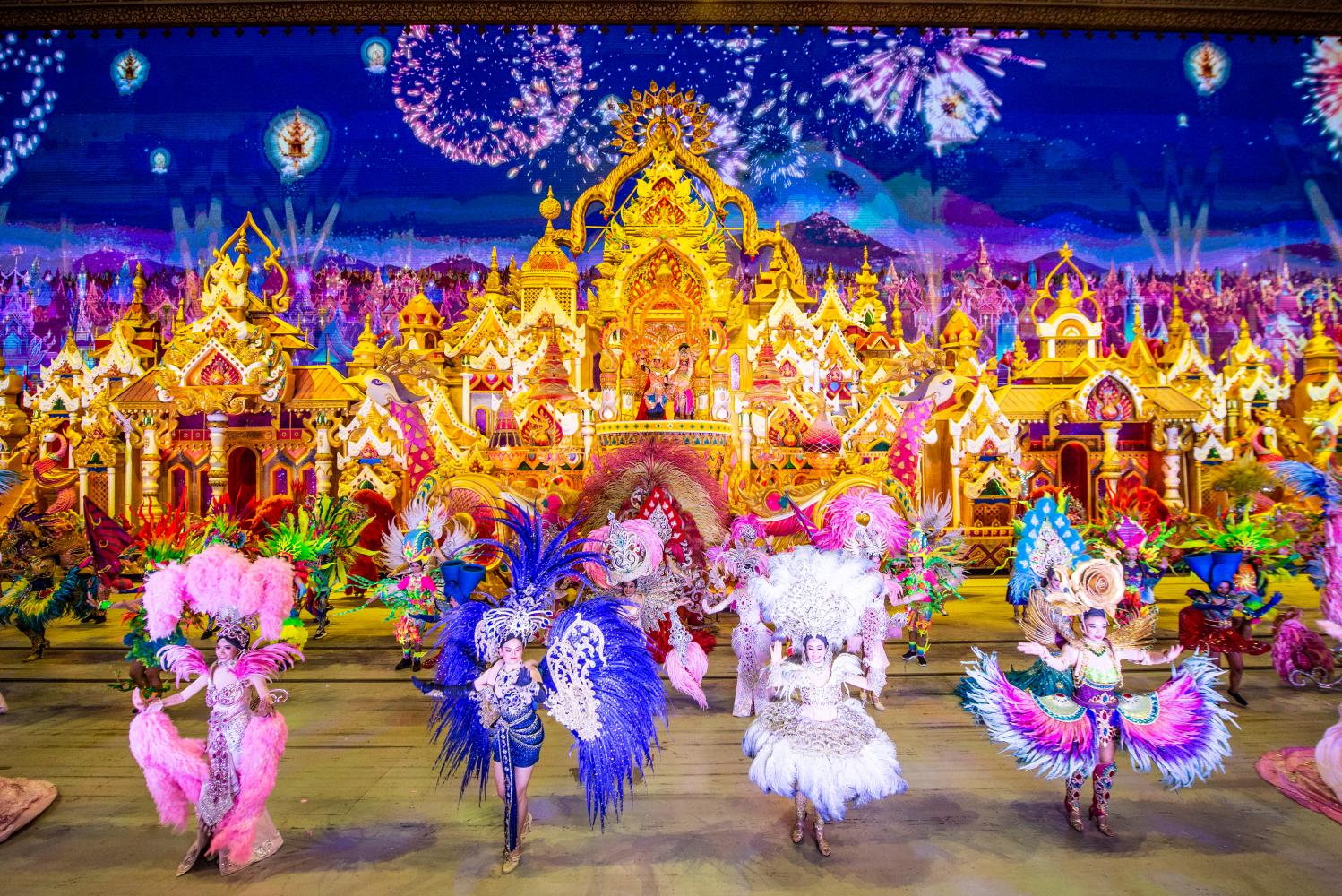 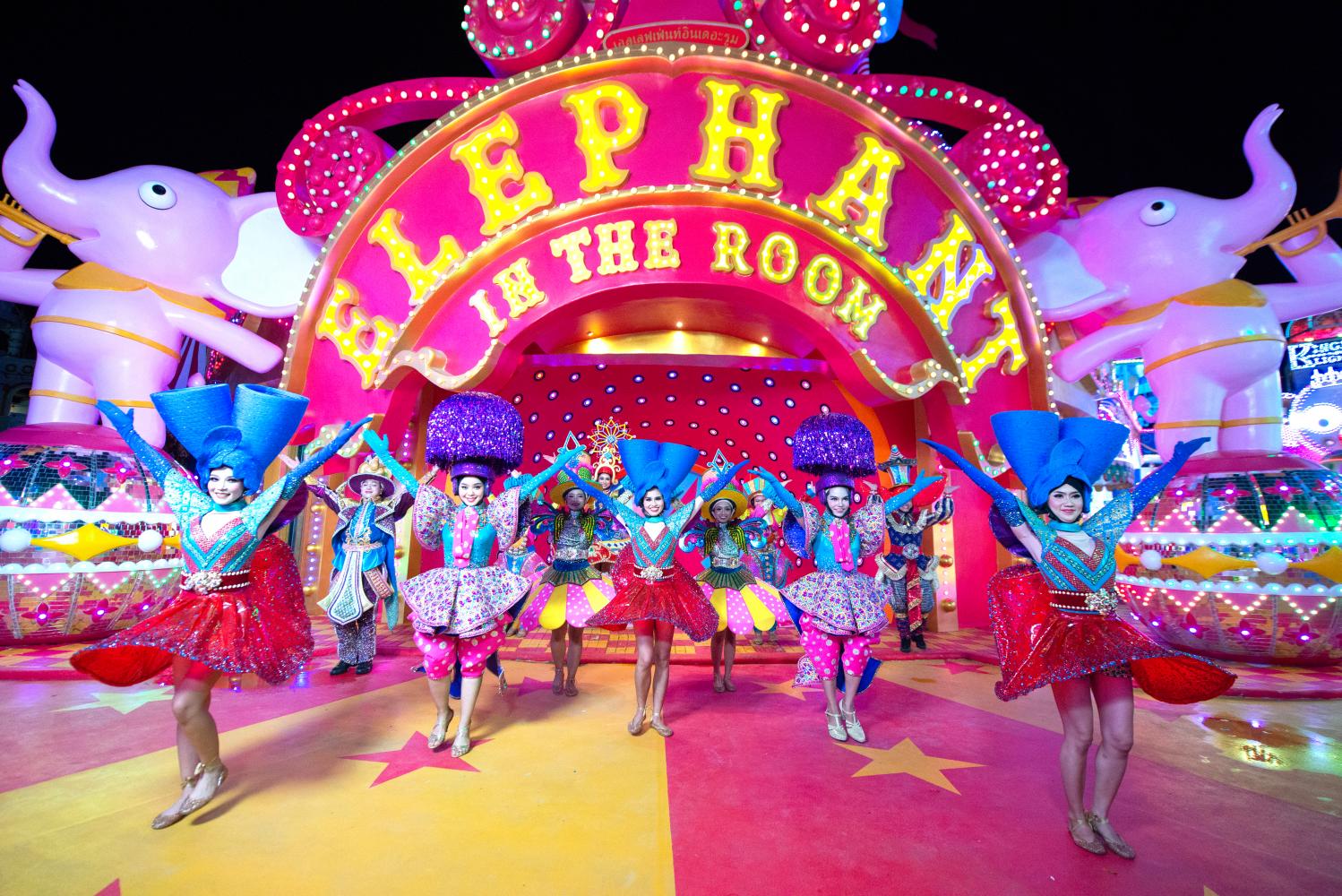 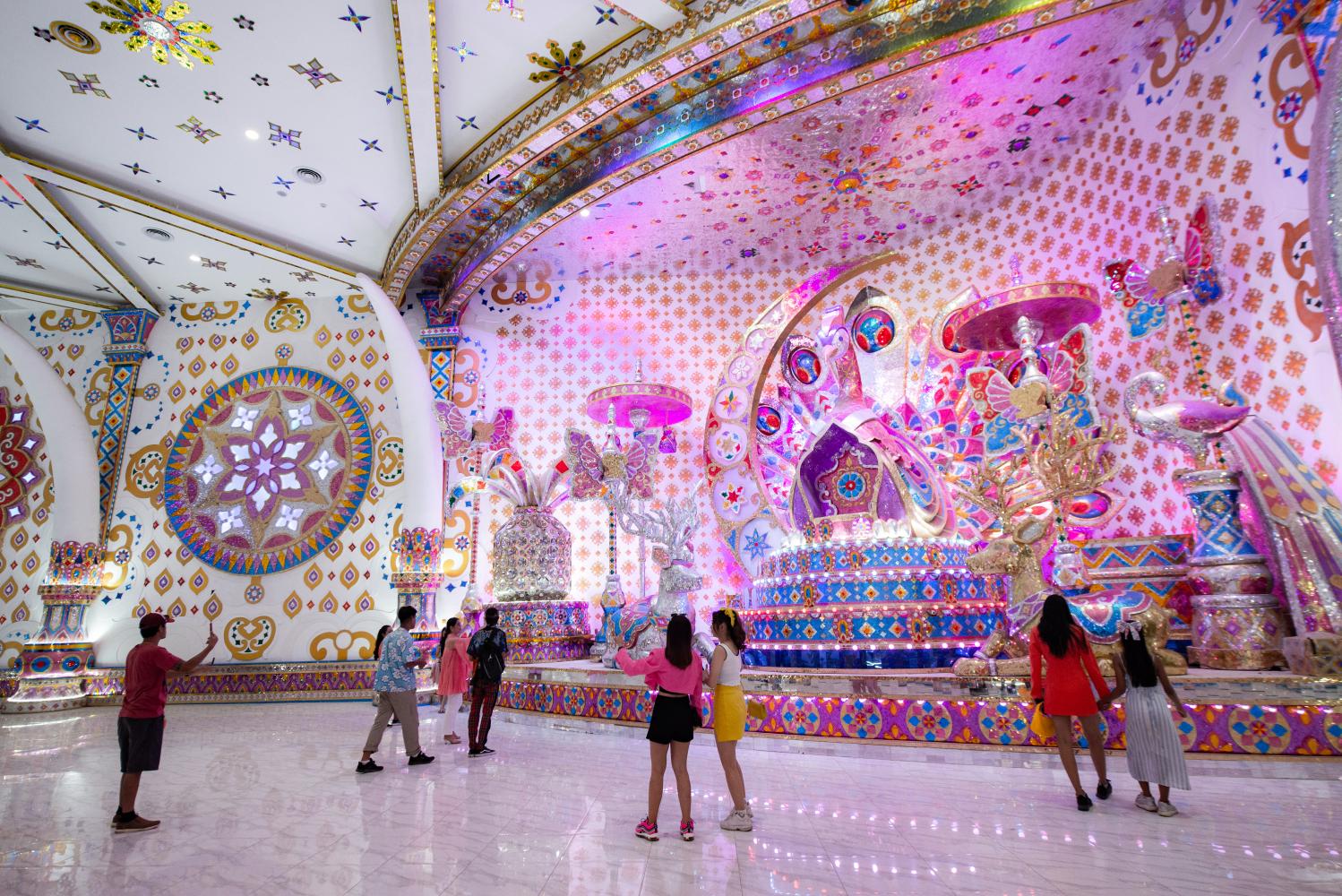 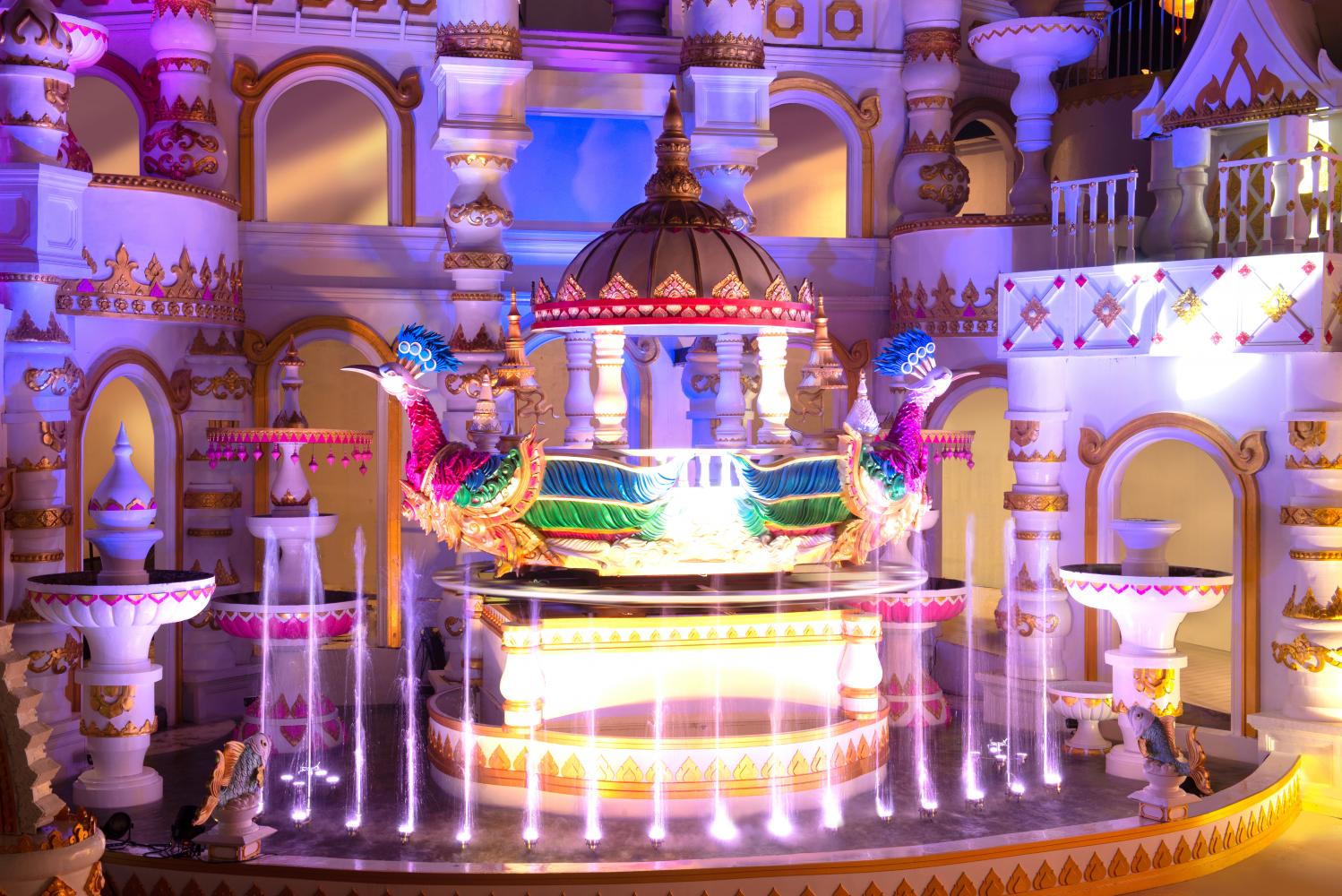 A group of Bozo-the-clown-like staff wave and greet visitors along the way, while the Jumboree Game Pavilion is a popular destination for families to spend time playing several exciting virtual reality games, Thai-style carnival games and kiddie rides such as balloon darts, hit the crocodile, carousel and a Ferris wheel.

The world's largest popcorn machine can be found here, while the street has been transformed into an open stage for carnival performances and is lined with photogenic backdrops for selfie-seeking travellers, as well as snack and dessert stalls.

"With Carnival Magic, we were motivated to create something that is uniquely Thai and has never been seen anywhere else in the world. As a result, Carnival Magic has become a theme park that has broken many records both in Thailand and overseas, including nine Guinness World Records," Kittikorn said.

We feel like we're in a dream when we enter the Toylet and see a swarm of cuddly monsters. Each of these spacious restrooms is furnished with auto-mechanic and sensor technologies. 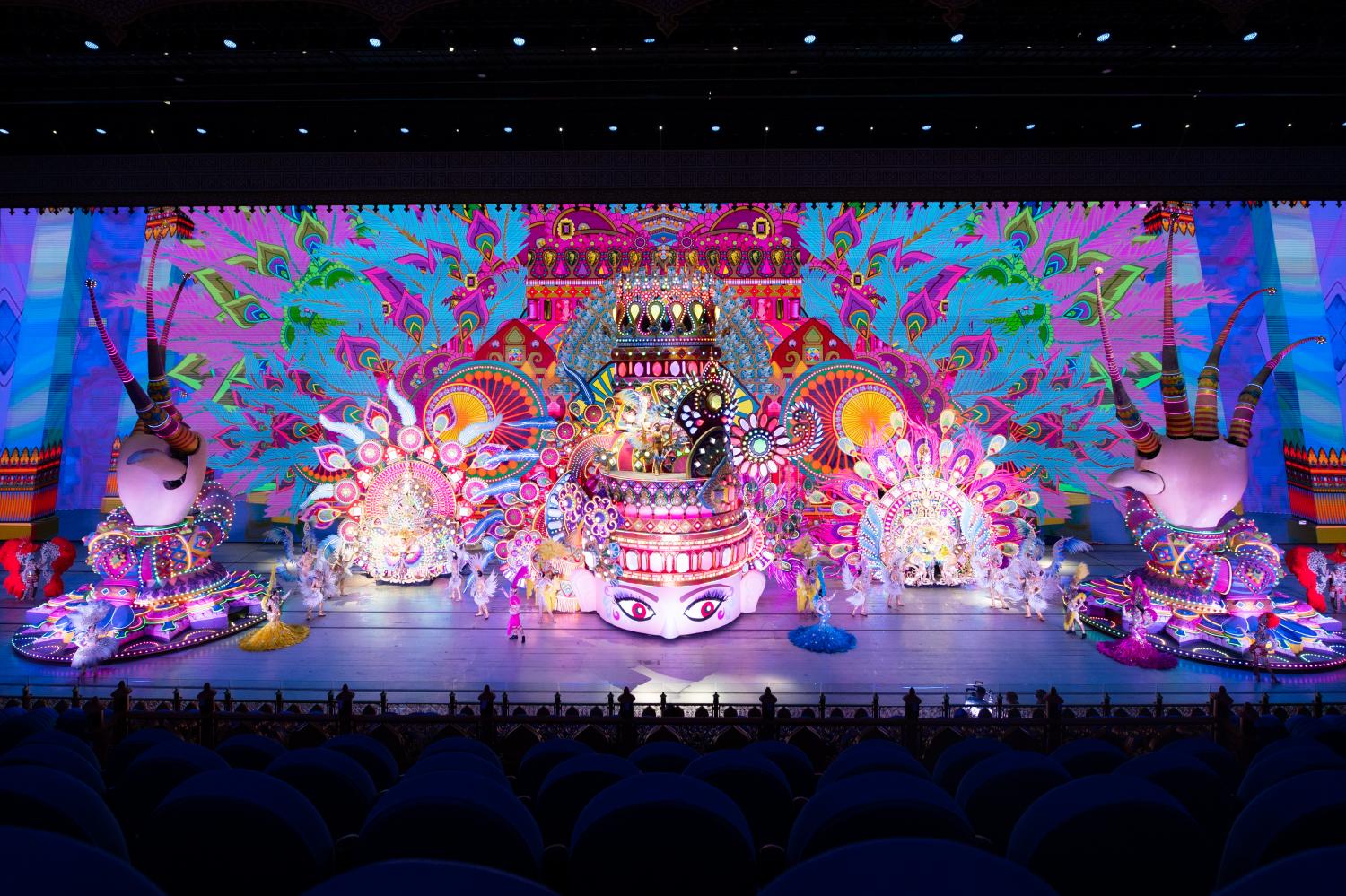 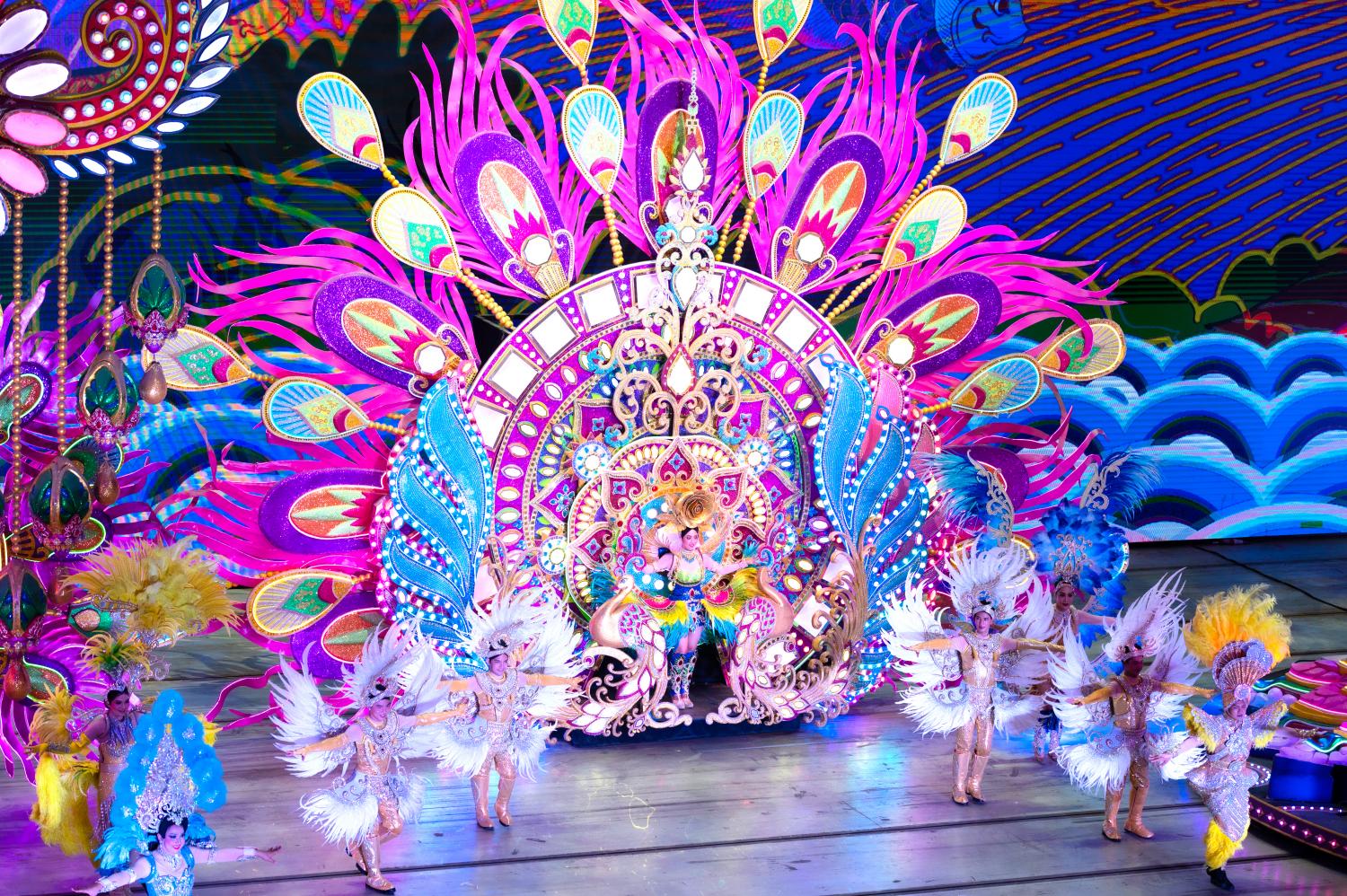 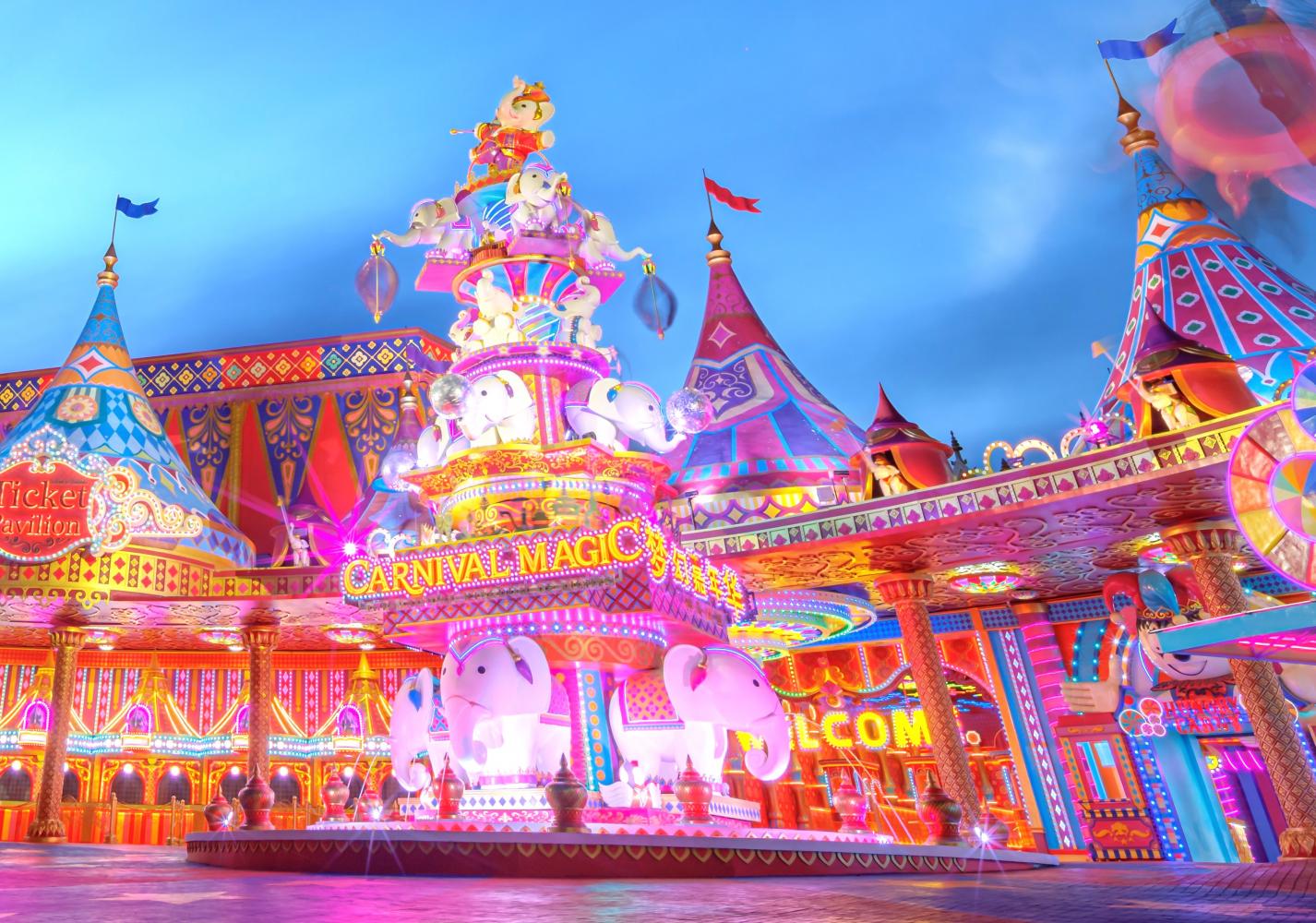 It is made to resemble a magical playground. For instance, a Brachiosaurus might approach you while you're washing your hands at a sink from behind a wall. Or another one is turning its face towards you when you sit on a toilet.

As we continue through the colourful lanes, we come upon the Bird of Paradise Buffet Restaurant, which serves over 100 cuisines from the East and West, as well as halal and vegetarian meals. A pair of massive peacocks fan their tails to defend the grand hall, which is supposed to look like a culinary paradise with seats for 3,000 people.

Not far away, the luxury River of Bliss restaurant will open soon to serve set meals. Diners will arrive at the Happiness Falls and board the Barge of Happiness, which will fly 7m above the ground to the dining hall, as an homage to Thailand's much-loved Loy Krathong festival.

After refuelling, we head to the River Palace, a massive 2,200-seat indoor theatre, where we take front-row seats and listen to the myth of the former Kamala kingdom. One of Thailand's largest theatres, it boasts a 70m-long and 22m-high stage with large LED screens and the River Carnival, the world's biggest indoor parade performance. 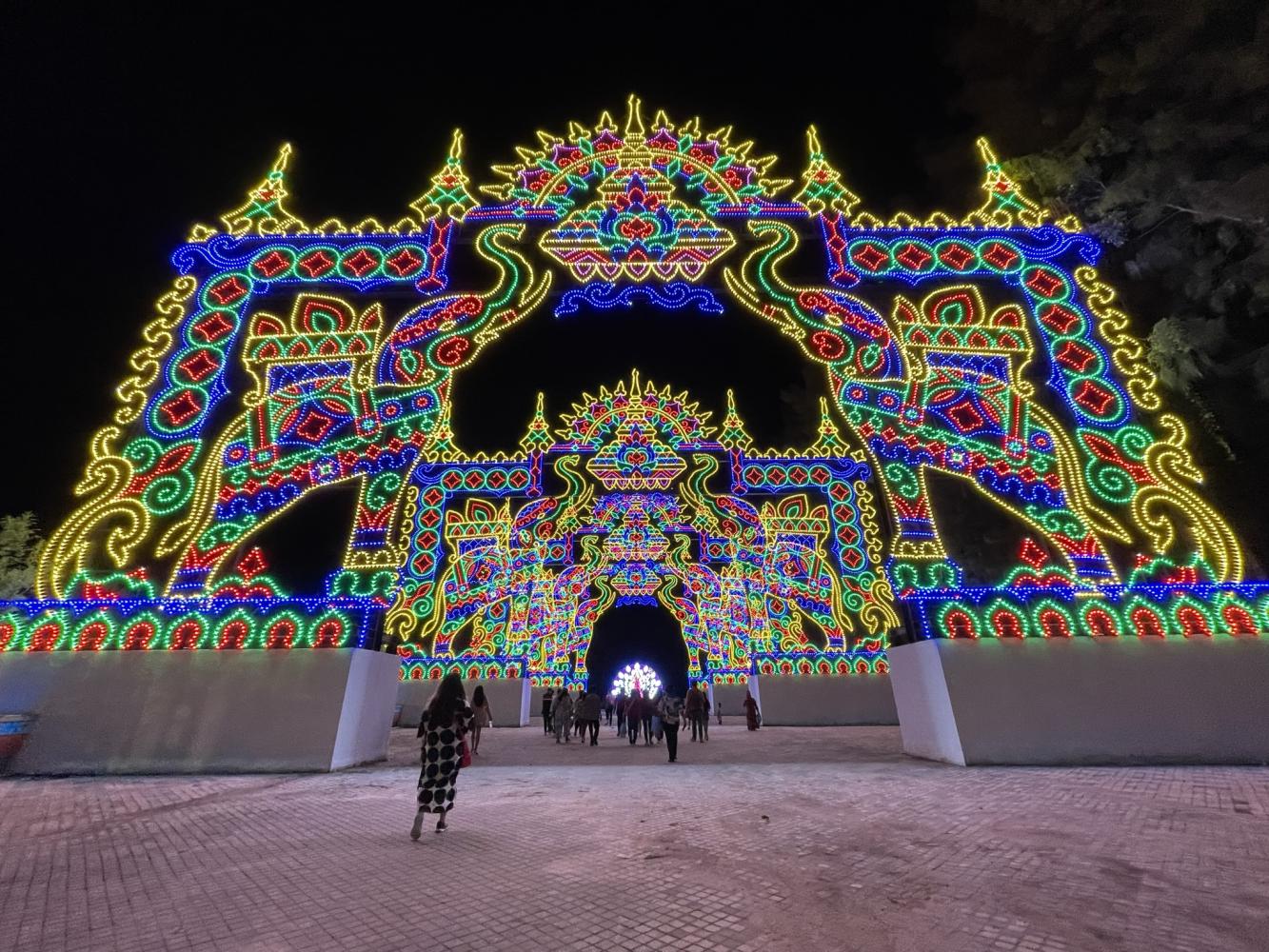 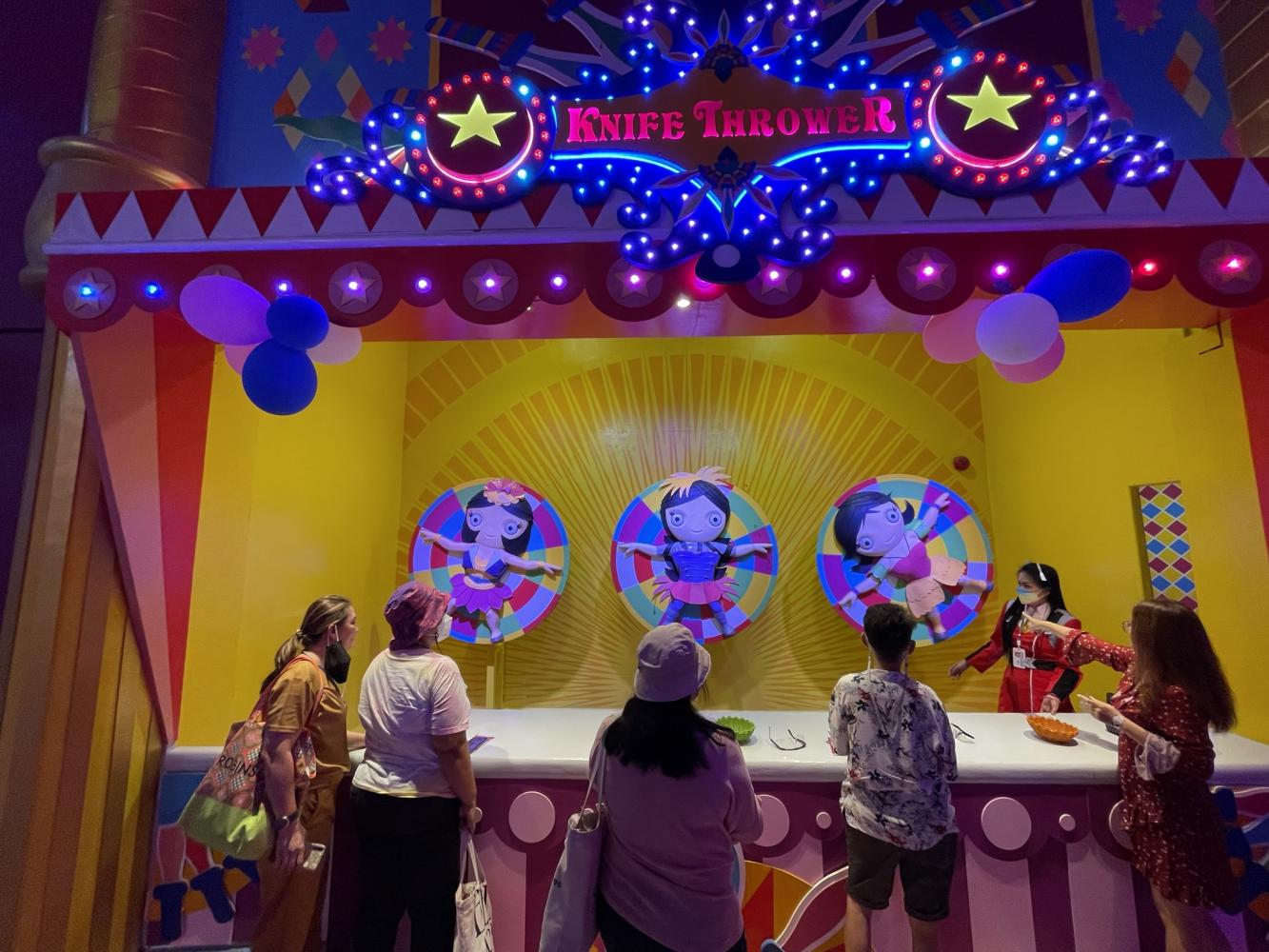 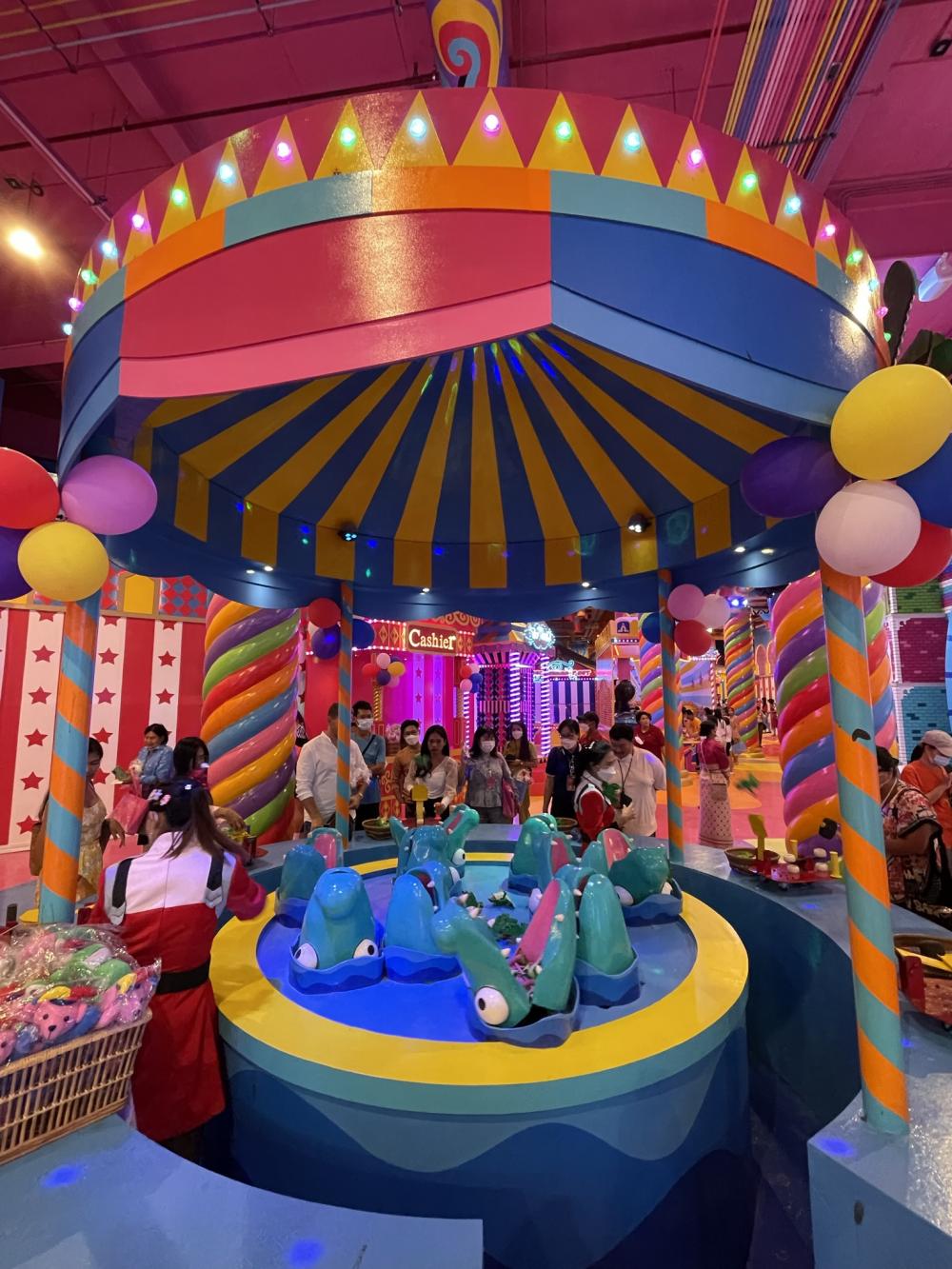 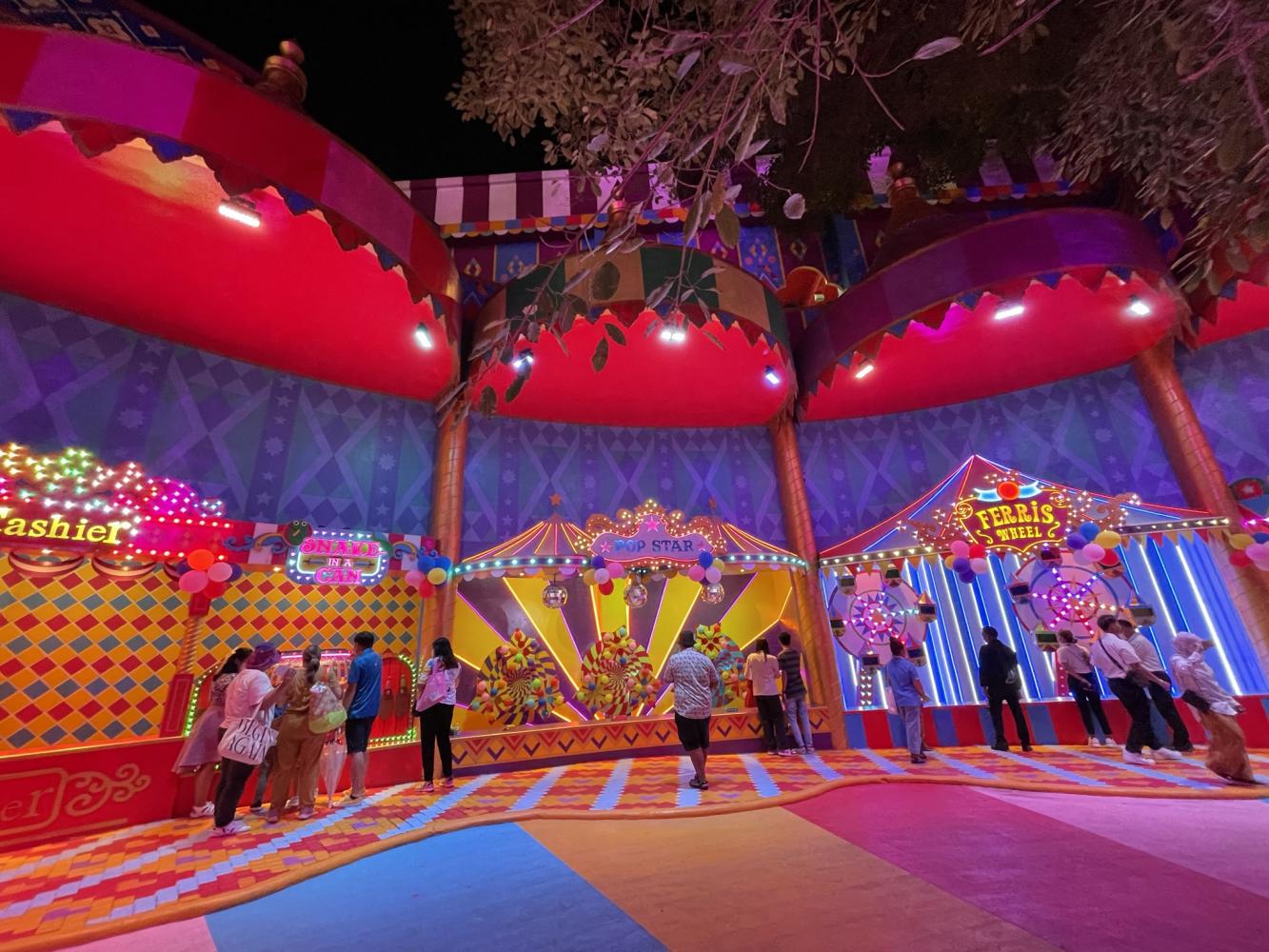 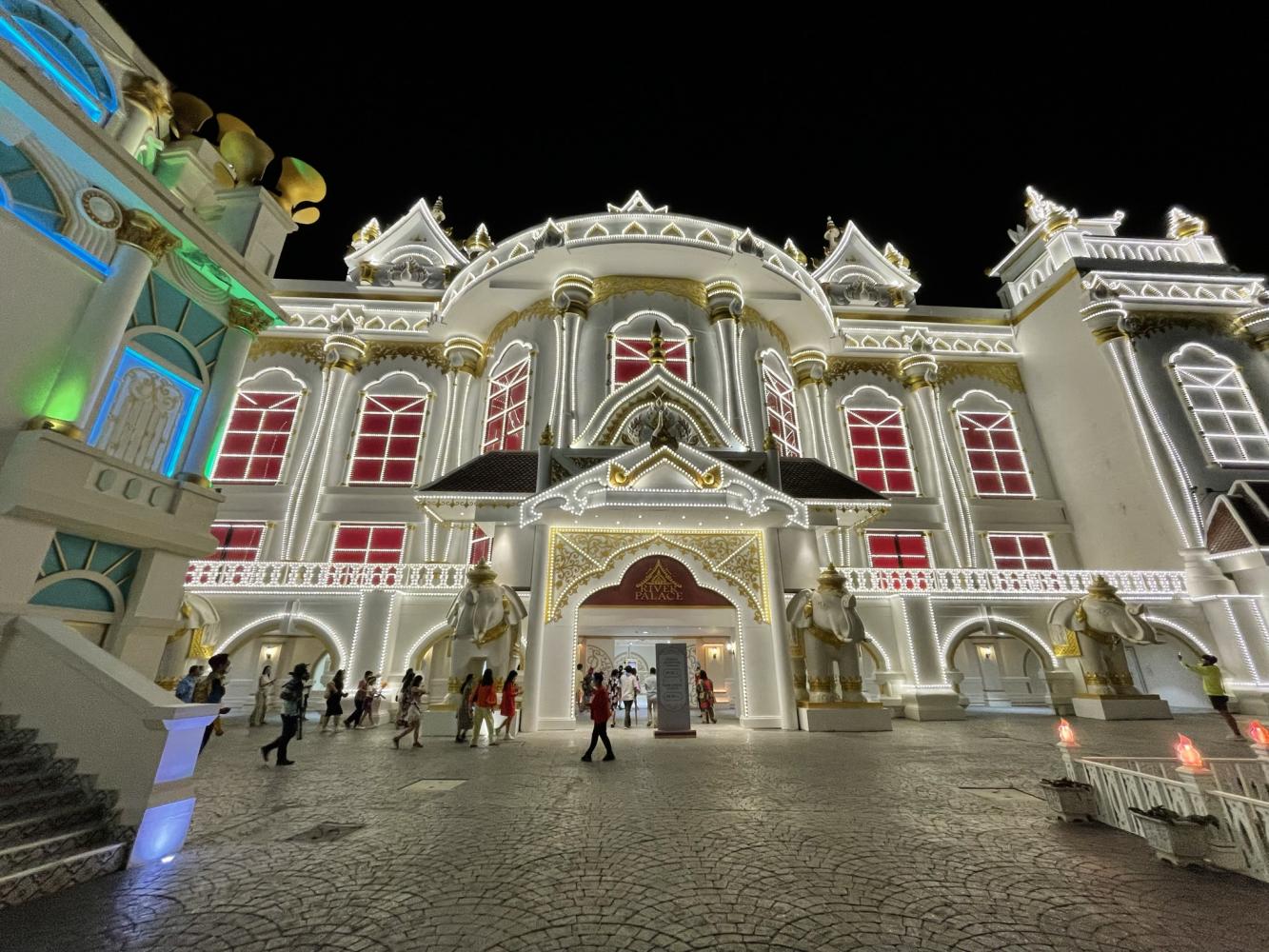 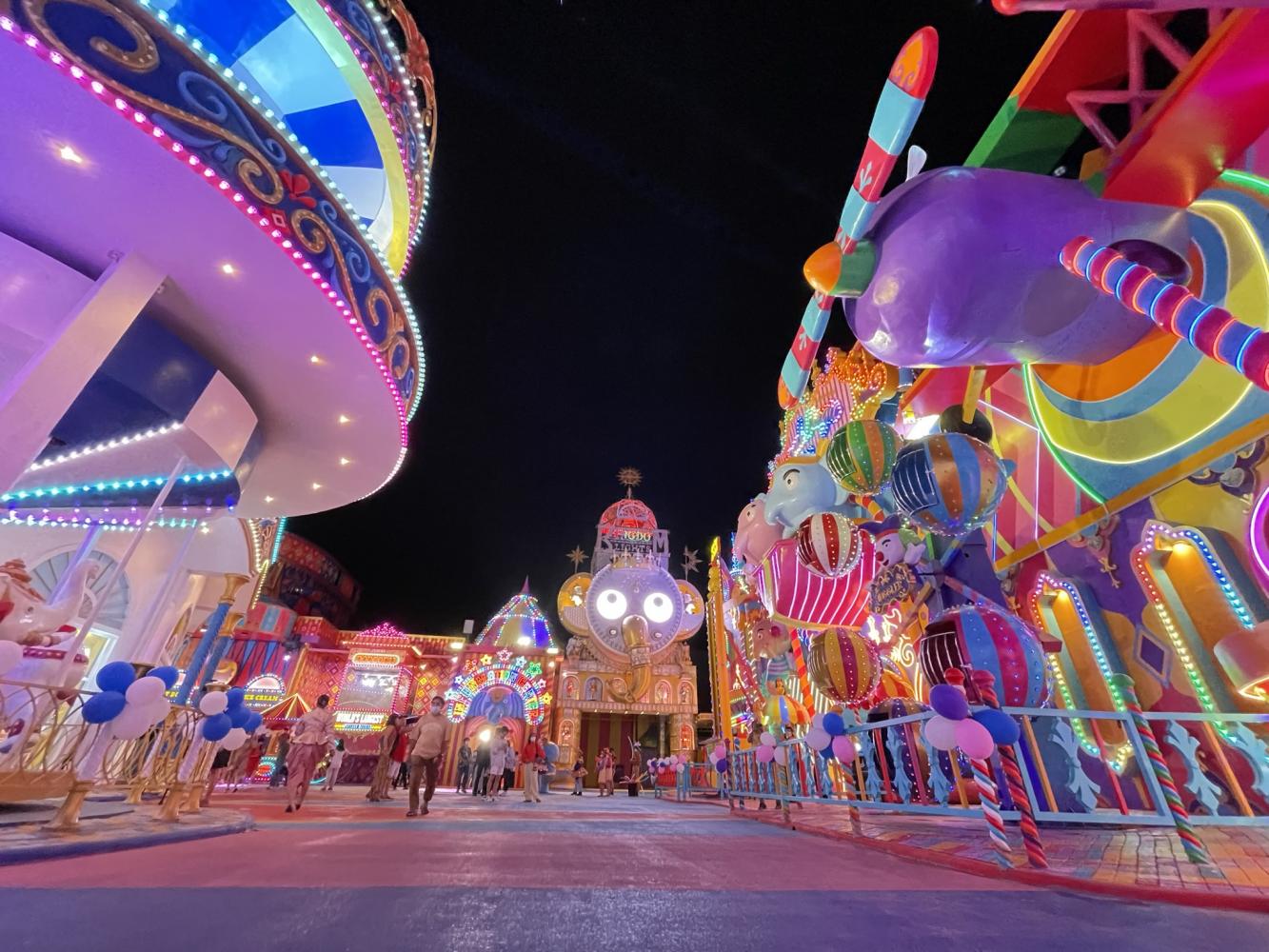 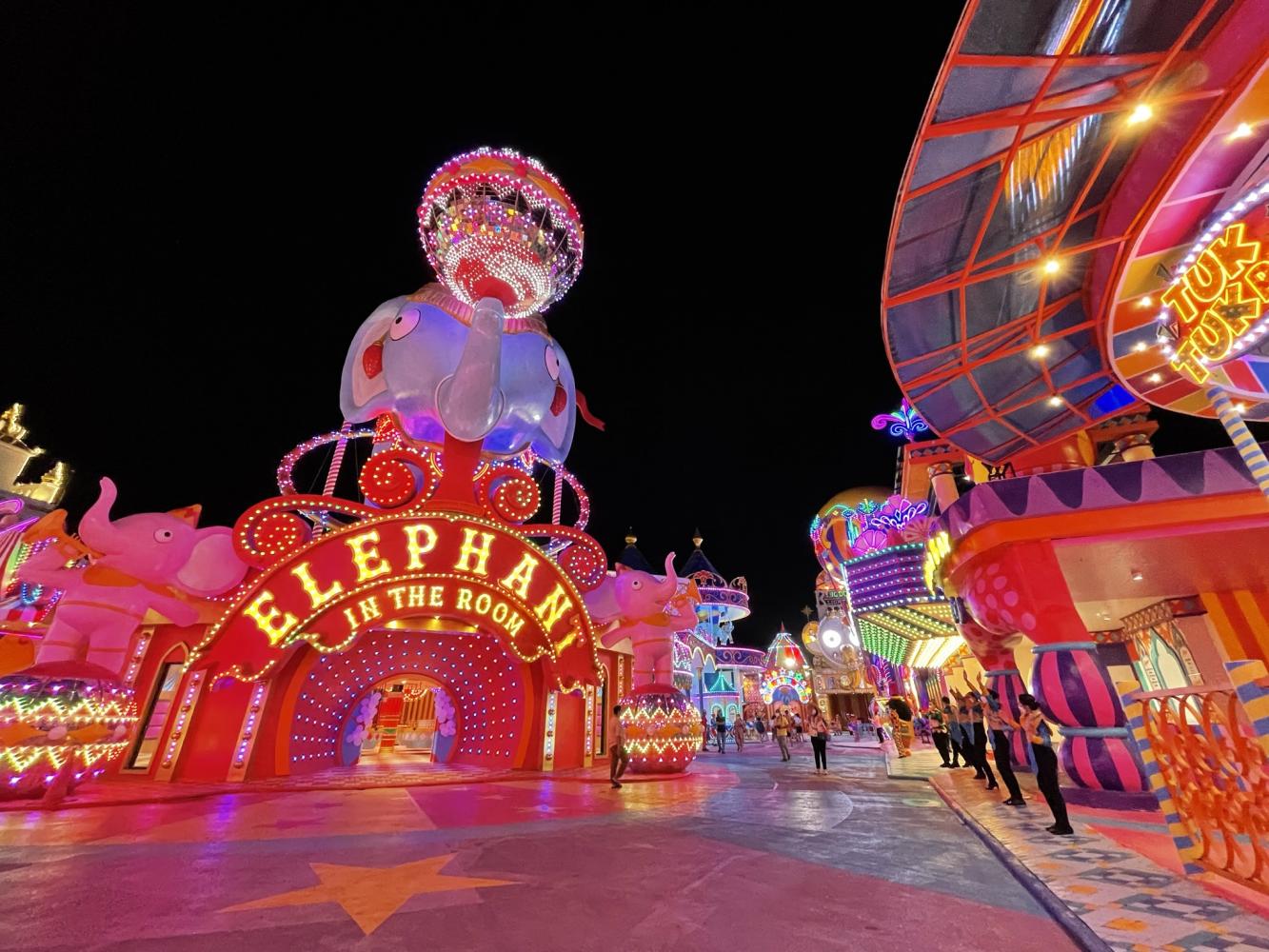 This 50-minute extravaganza combines Thailand's folklore, festivals and parades with cutting-edge animatronics technology and special effects. It tells the tale of how Prince Kamala and his people were turned into stone sculptures because they were obsessed with evil.

When they successfully bring their kingdom back to life, Prince Kamala departs from his throne to explore the country and discover what it means to be Thai. Upon his return, the villages welcome him with a stunning parade of 88 gigantic floats that are as long as an Airbus A380 and decorated with millions of lights.

After that, we take part in a procession and march around the 40 rai Kingdom of Lights. Designed to be an outdoor lighting park, it is divided into nine zones and graced with 40 million lights to spark imagination.

Behind the palace is a rainbow-lit backyard, where the world's largest peacock-like LED sculpture stands amid flower-like lights. Visitors are allowed to walk through a sparkling throne room and take selfies with a white buffalo, an elephant and a horse-drawn carriage fashioned out of glass mosaic to represent the splendour.

We travel through the colossal, vibrant lighting tunnel, which is designed like an elephant. At the end of the pathway is a sculpture that looks like a peacock. They stand in for the Kamala kingdom's prince and princess. 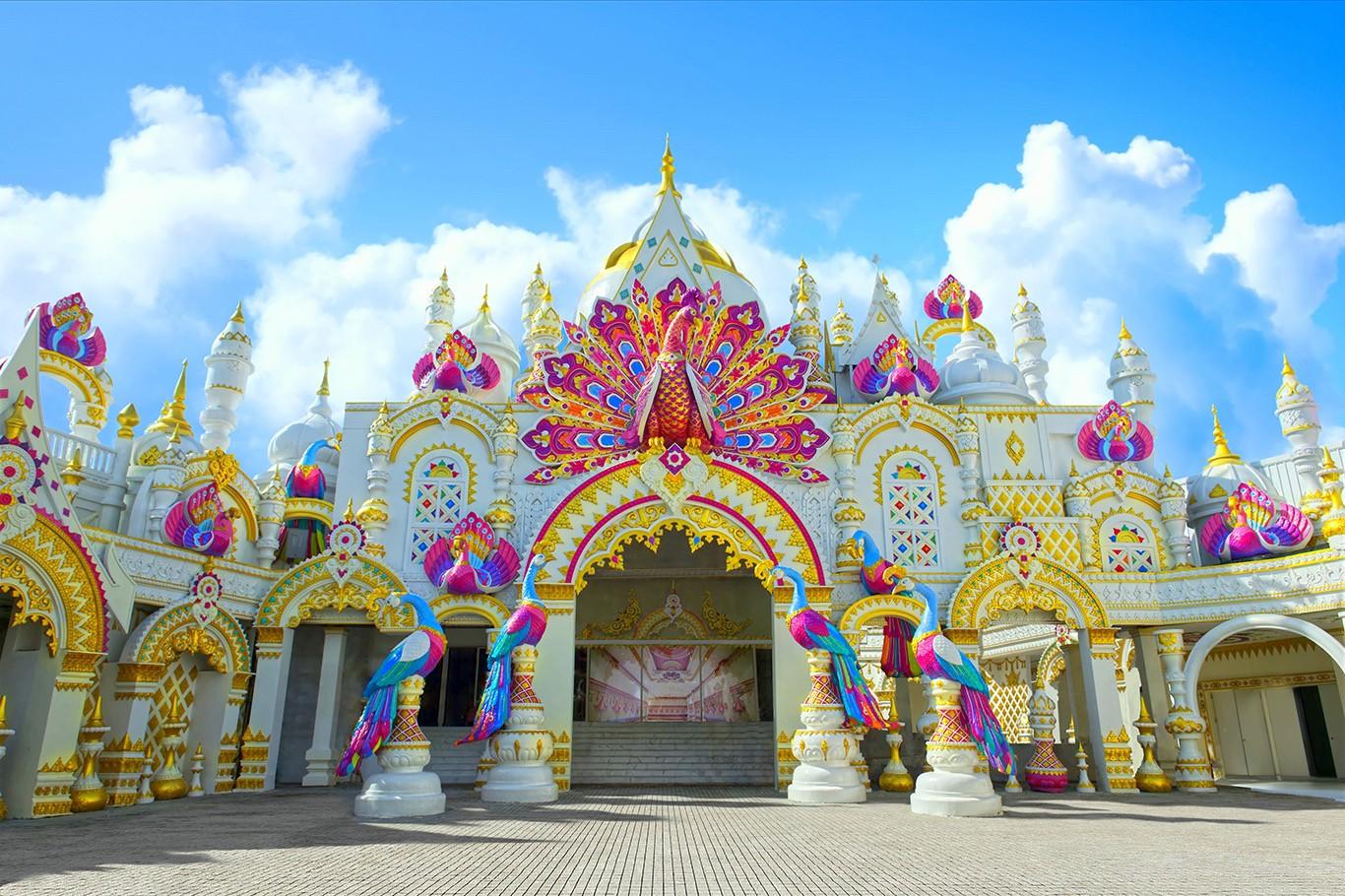 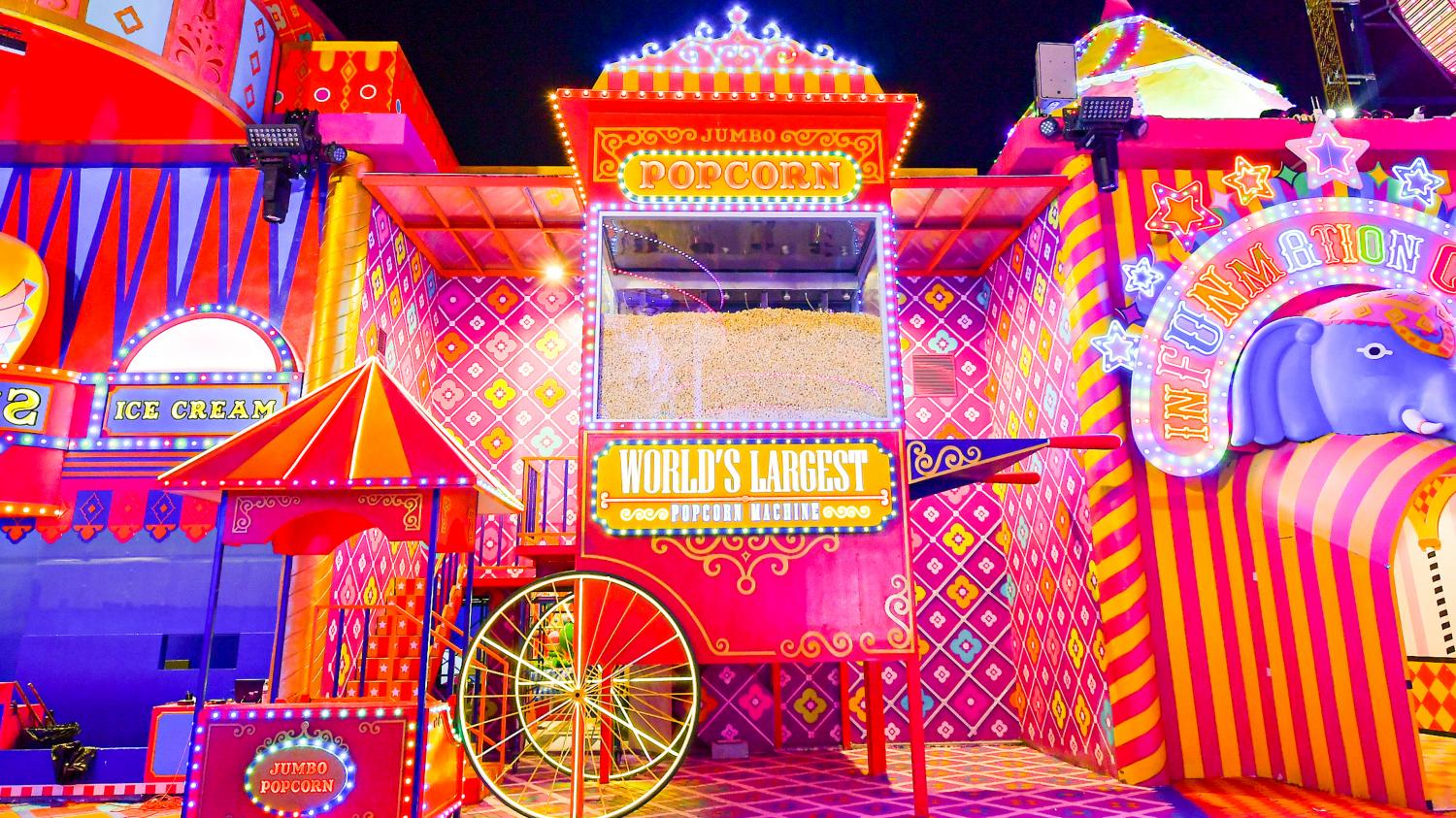 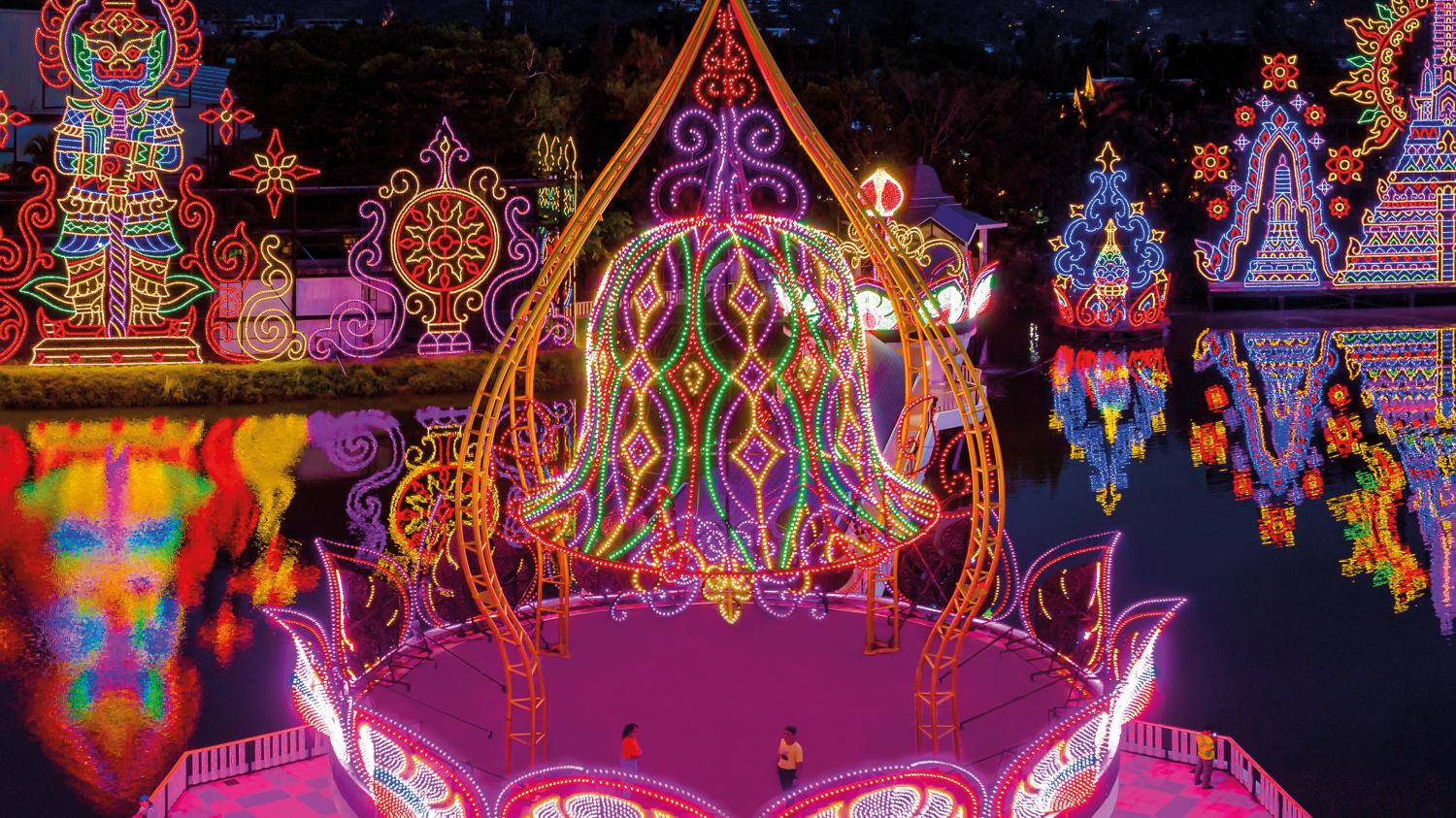 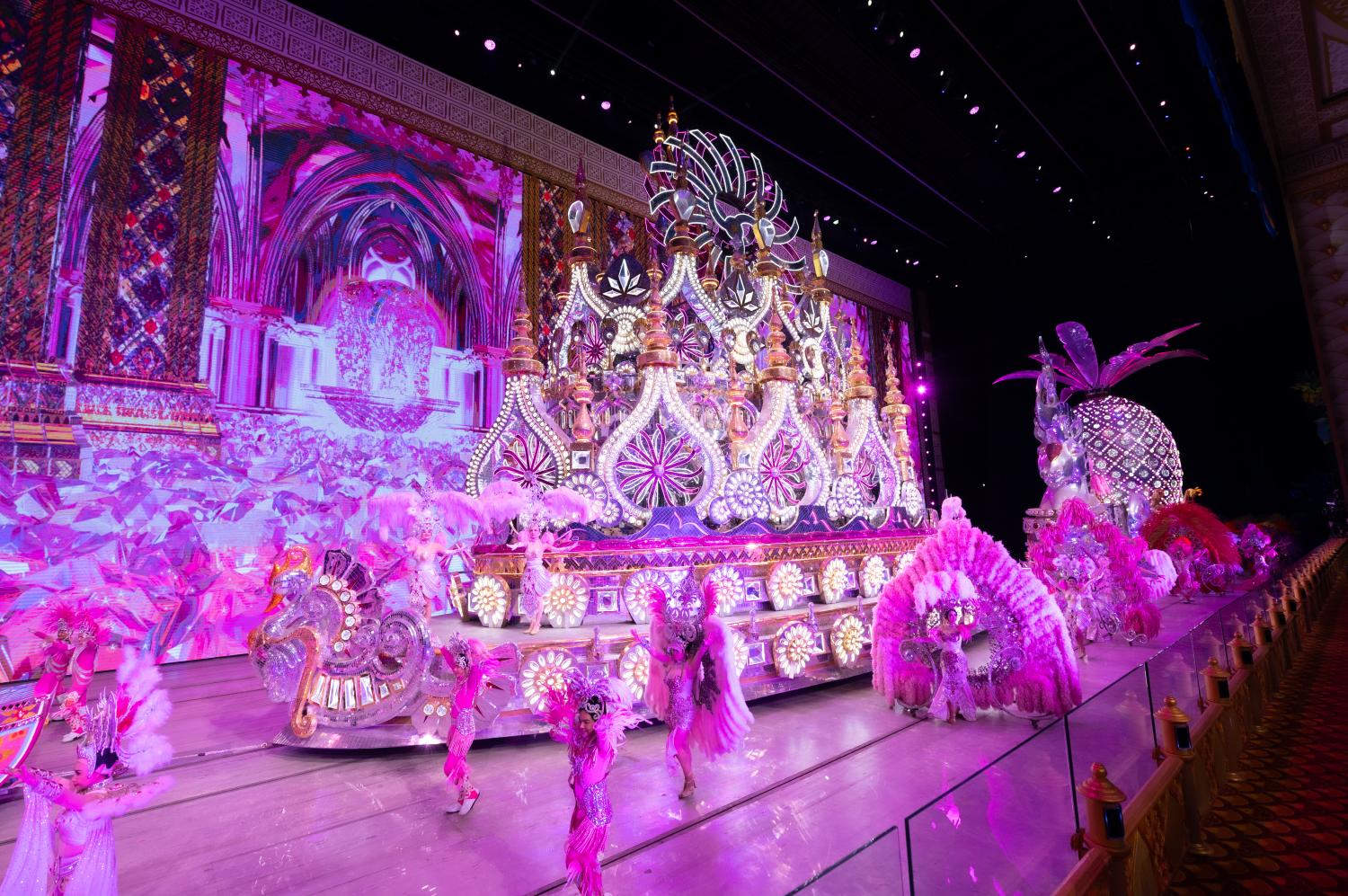 The River of Lights runs through the middle of the kingdom, in which steel plates are used to form striking art structures called Luminaries. While strolling down the bridge, visitors can envision themselves viewing the Loy Krathong festival, the candle procession and the illuminated boat procession.

"Our priority is safety. Ninety percent of the attractions are indoor and connected to pathways, allowing guests to travel even when it's raining. We have solar panels that provide electricity. While LED lighting saves money, this theme park is environmentally friendly," Kittikorn explained.