Step into the past
Life
Social & Lifestyle

Step into the past

Four years after his appointment as Gucci's creative director in 2015, Alessandro Michele imagined high jewellery illuminating the Garden of Delights. 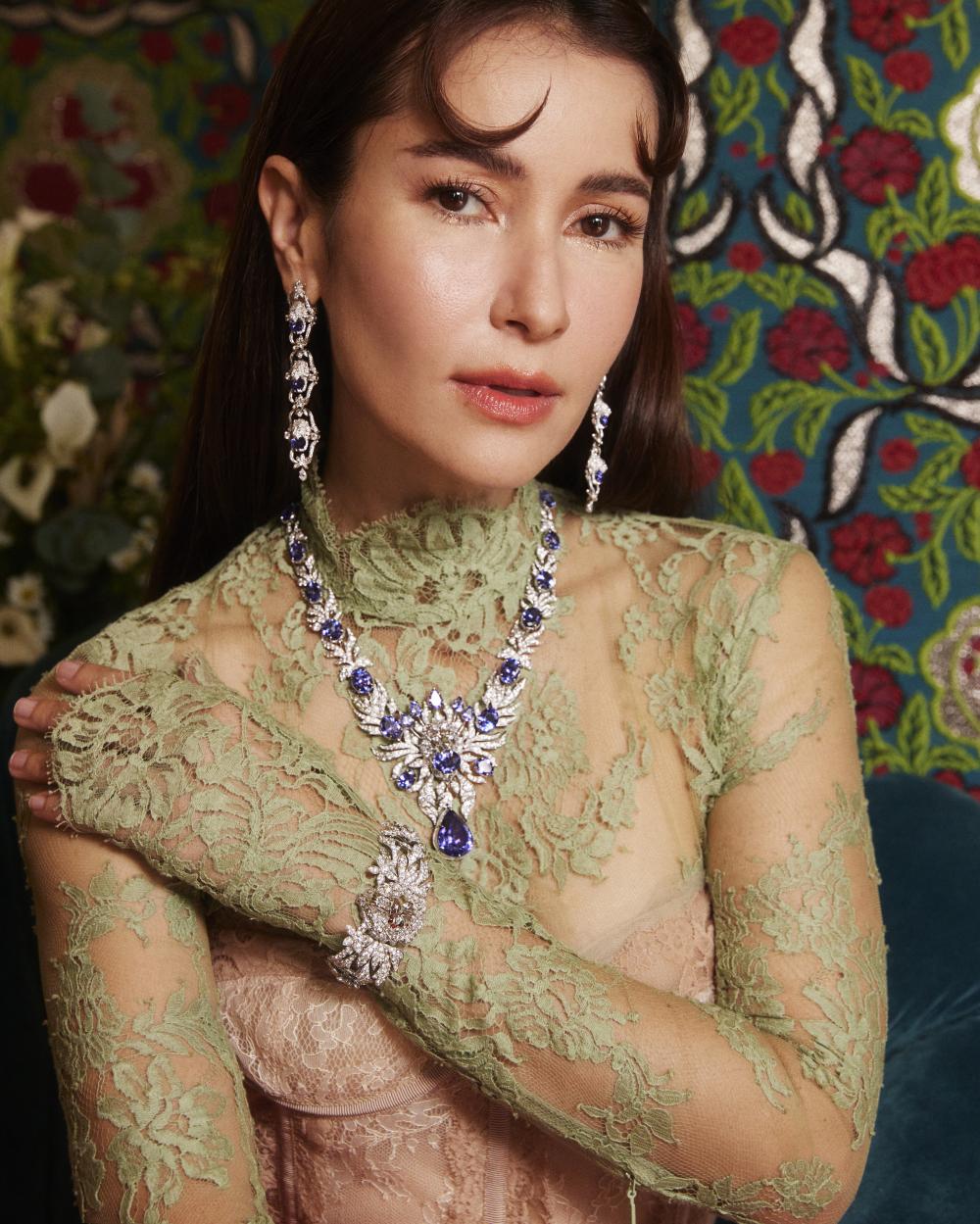 Tanzanites mingle with diamonds on a white gold Lionhead necklace and earrings worn by Anne Thongprasom.

Following two collections, Michele goes back in time for the third act of Hortus Deliciarum, which was recently presented in Bangkok against the splendid backdrop of Sri Sutthaniwart Throne Hall in Phyathai Palace.

Based on five themes, the Hortus Deliciarum collection unfolds like a travel diary, with the "souvenirs" materialising as a form of jewellery and the fantastical journey leaving a "memory of memories".

The creative director chronicles his imaginative odyssey in the Grand Tour, which starts in the mid-19th century and ends in the 1970s.

He was actually born in that tumultuous decade in Rome, whose historical landmarks appear on framed micro-mosaics, which characterise the high jewellery under the first theme.

The unique micro-mosaic pieces, made between 1850 and 1870, bring to this collection their precious nature while depicting the Colosseum, Piazza San Pietro and the Pantheon as it was in the 19th century. In addition, the cameos portray the Roman Forum, Temple of Vesta, Temple of Hercules at Cori, waterfalls at Tivoli and the Pyramid of Cestius. 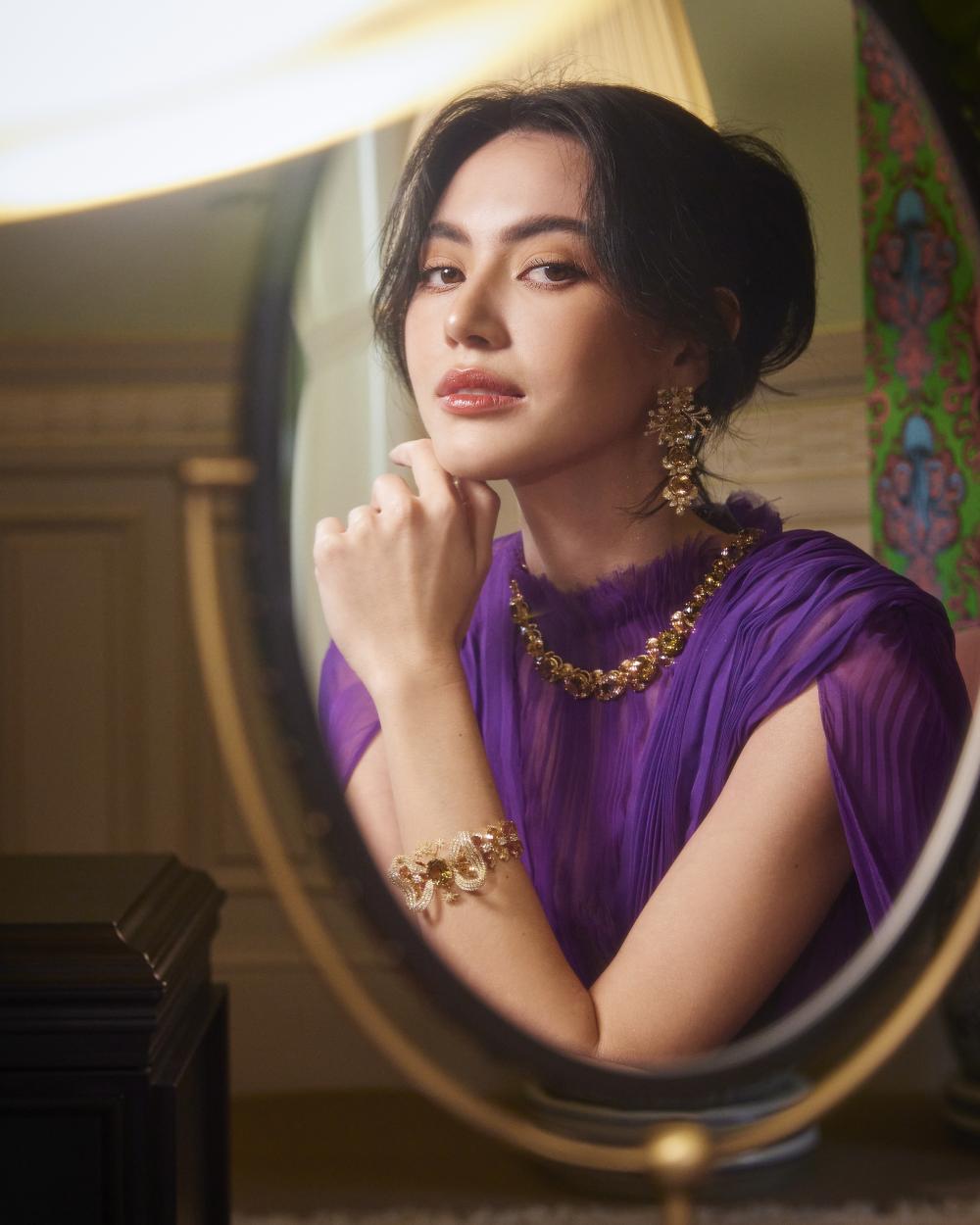 After Italy, the second theme lands in India, known for iconic gemstones and magnificent jewellery worn by the maharajahs. Gucci's unique pieces are adorned, for instance, with rubellite, imperial topaz, yellow beryl and tourmaline.

The third theme revolves around pearl, which according to a Greek myth is born from the foam of the sea and solidified on Aphrodite's skin.

Rich in places like Indonesia, Polynesia and Australia, this symbolism of femininity guides the traveller to the point where East meets West, with myriad historical references such as Botticelli's Birth Of Venus and portraits of Elizabeth I wearing pearl jewellery. 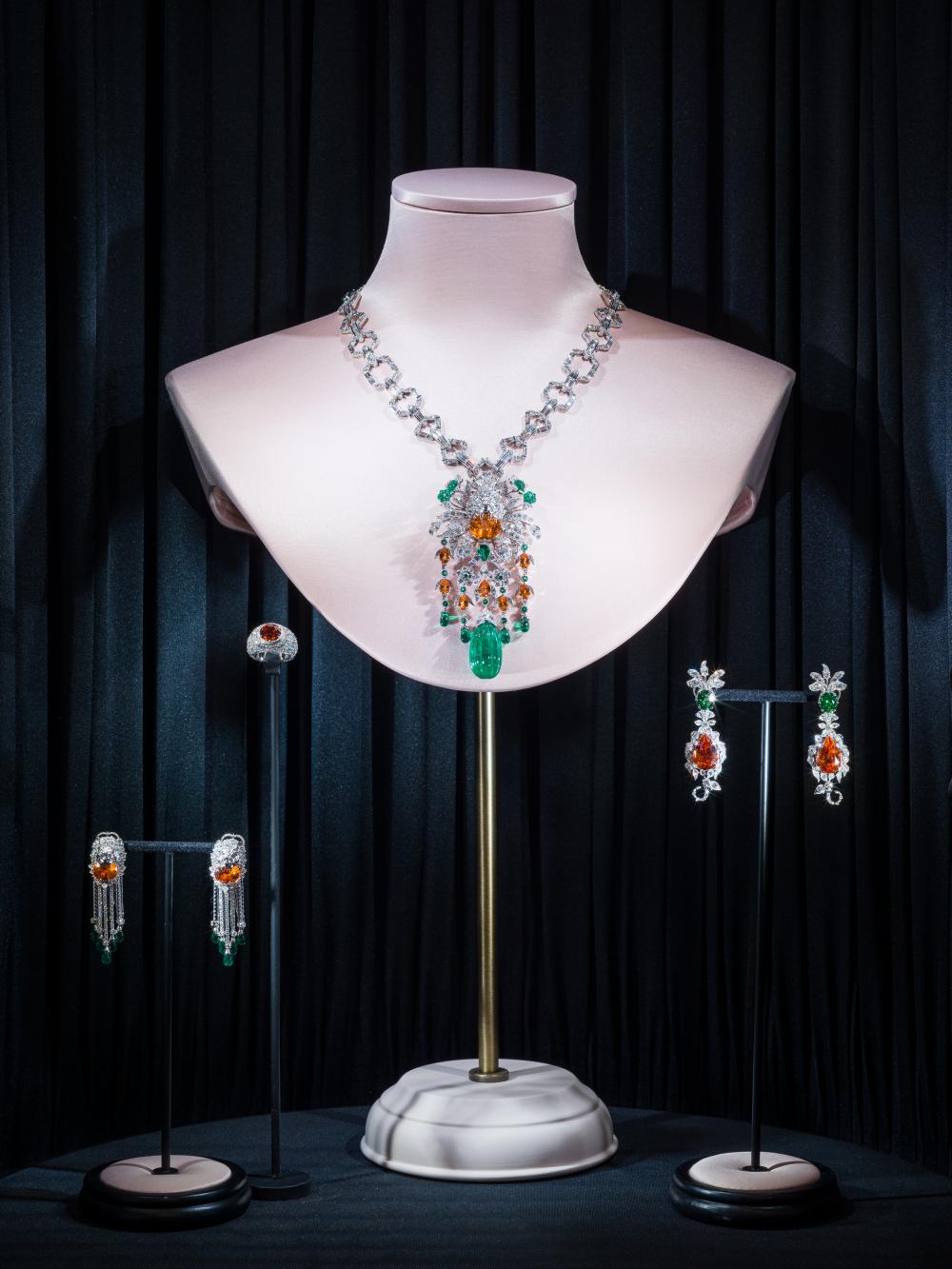 The fourth stop revisits the New World in the 1930s and 1940s when skyscrapers soared into the sky. The change of pace is illustrated by necklaces and bracelets designed with geometric shapes in chains with asymmetrical, flexible modules, whose meticulous structural details are dramatically corrupted by grandiose stones.

The travelogue finally reaches the 1970s -- a decade of pop culture, free self-expression and the desire to discover foreign lands.

A pendant with a yellow gold base recalls a scene in the savannah, engraved and enamelled. The design is taken from a 1980s pendant, inspired by the Savana foulard Vittorio Accornero De Testa fashioned for Gucci in 1969.

The one-of-a-kind pieces from the Hortus Deliciarum collection are sustainably made with gold, and certified under the Responsible Jewellery Council Chain of Custody scheme, which makes it possible to identify its origin and ensure ethical sourcing. 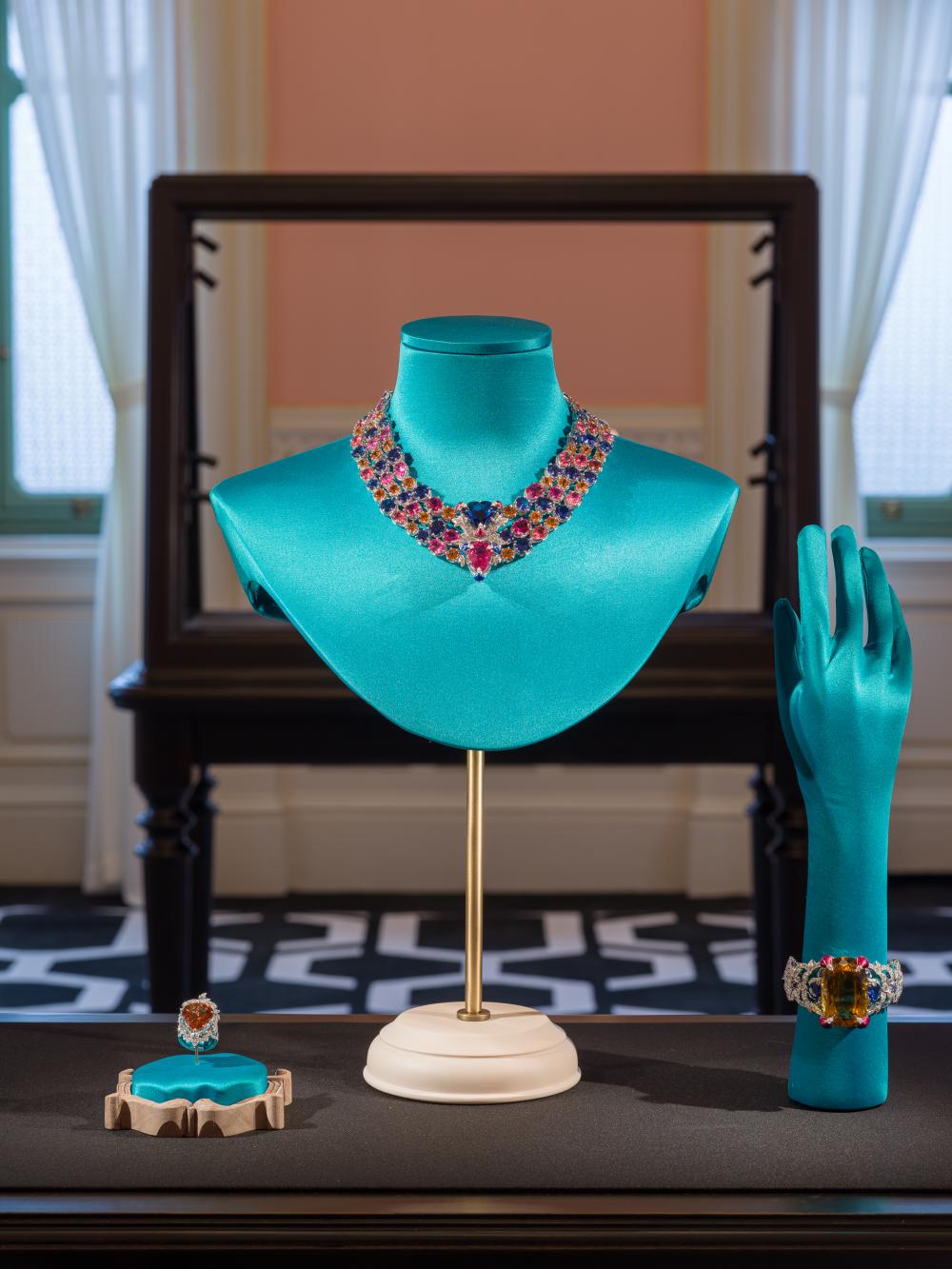 Tanzanites, rubellites, garnets and diamonds along with enamel adorn the Kaleidoscope necklace. 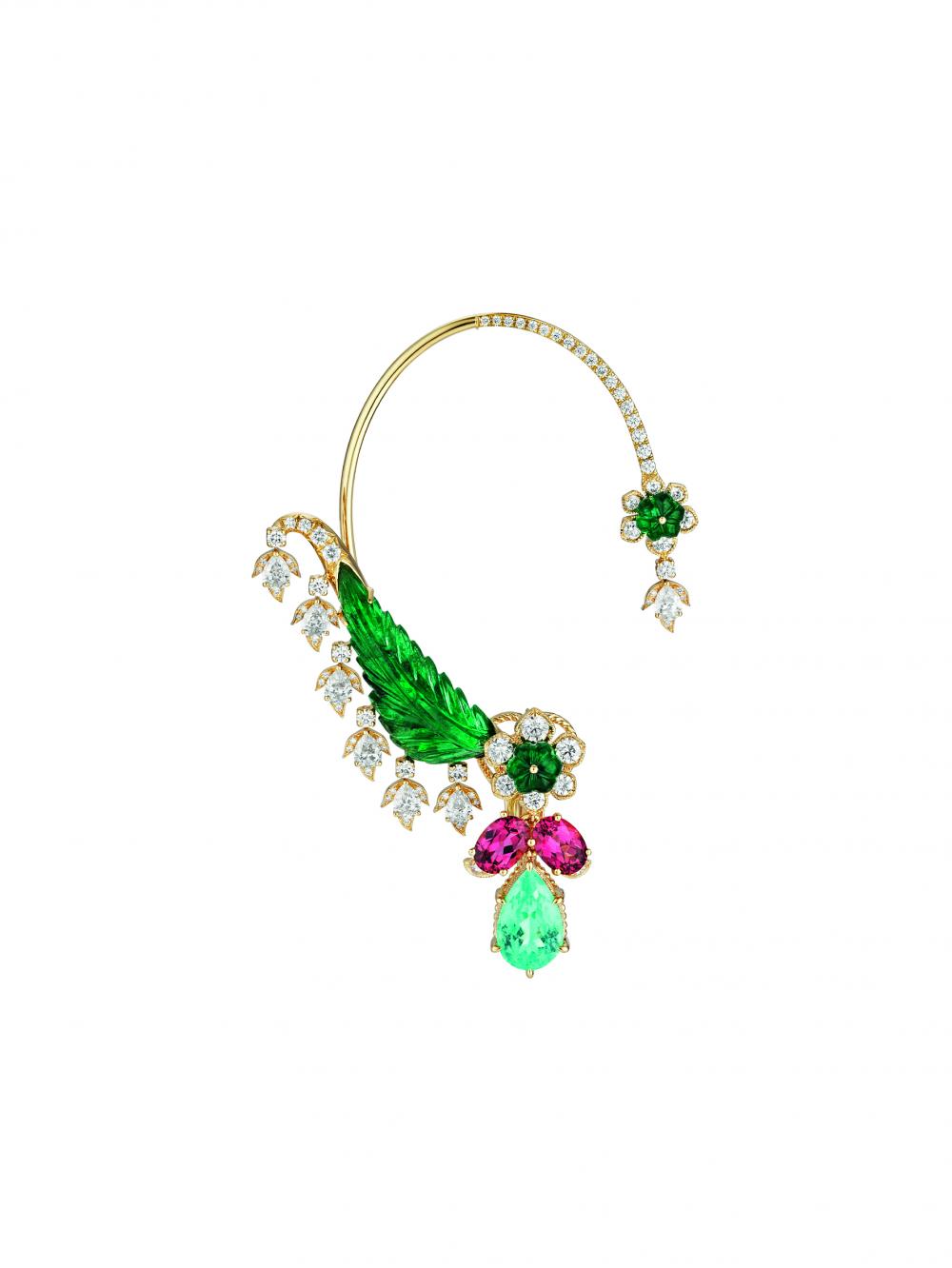 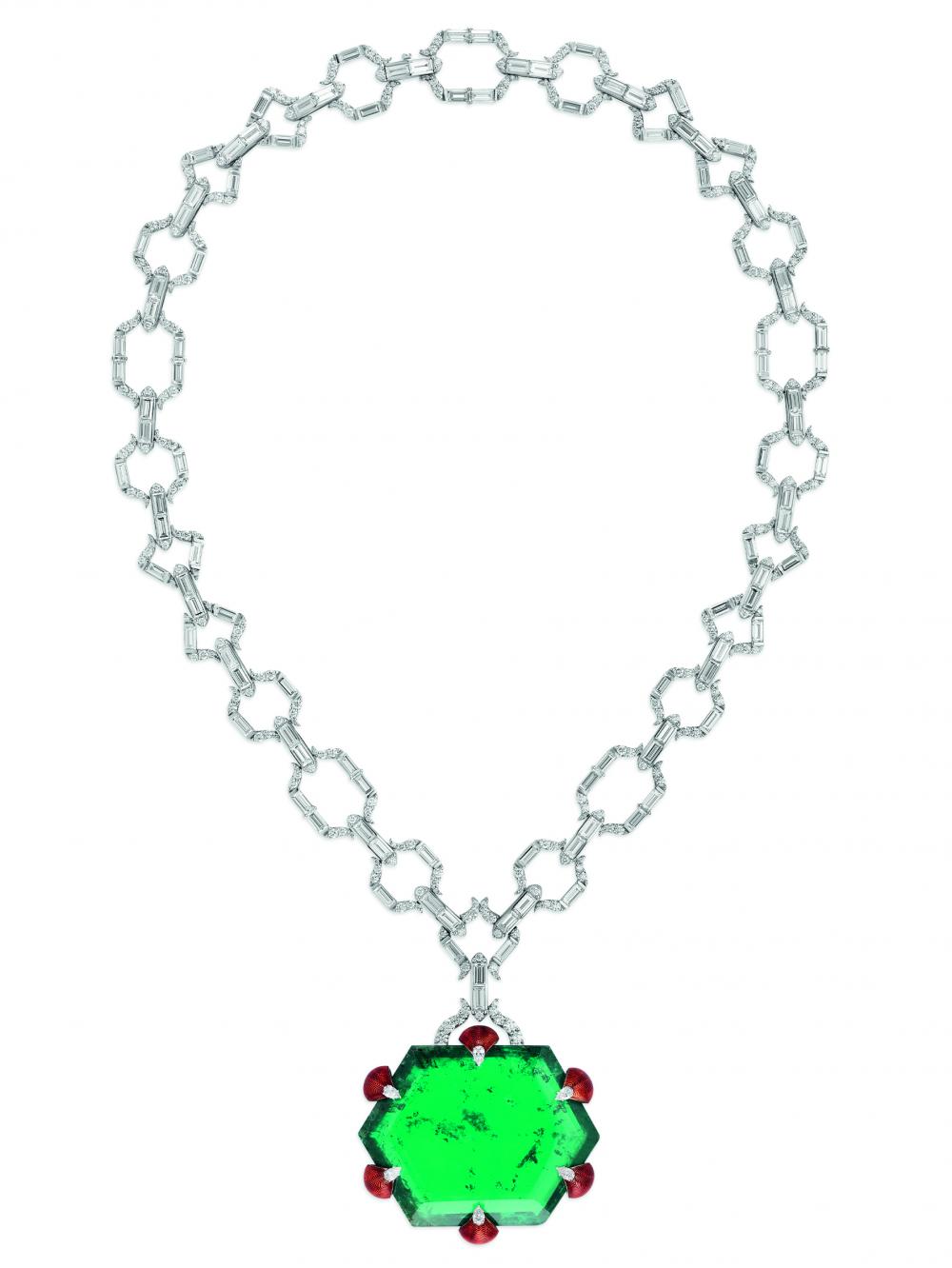 White gold 1970s Heart of Asia necklace with the hexagonal emerald as a talisman. Gucci 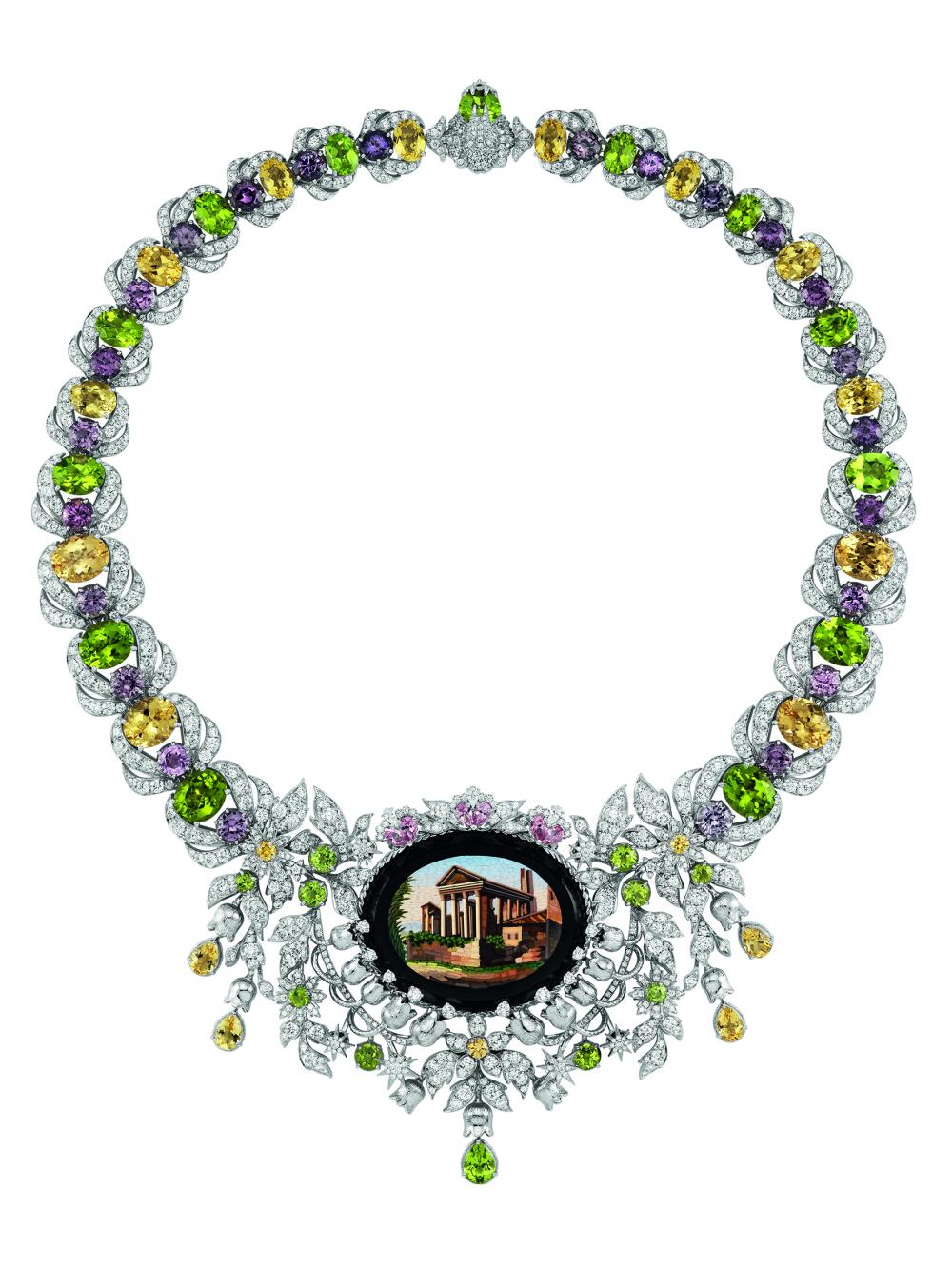 Roma Lionhead earrings and Roma necklace with micro-mosaic depict the Temple of Hercules. 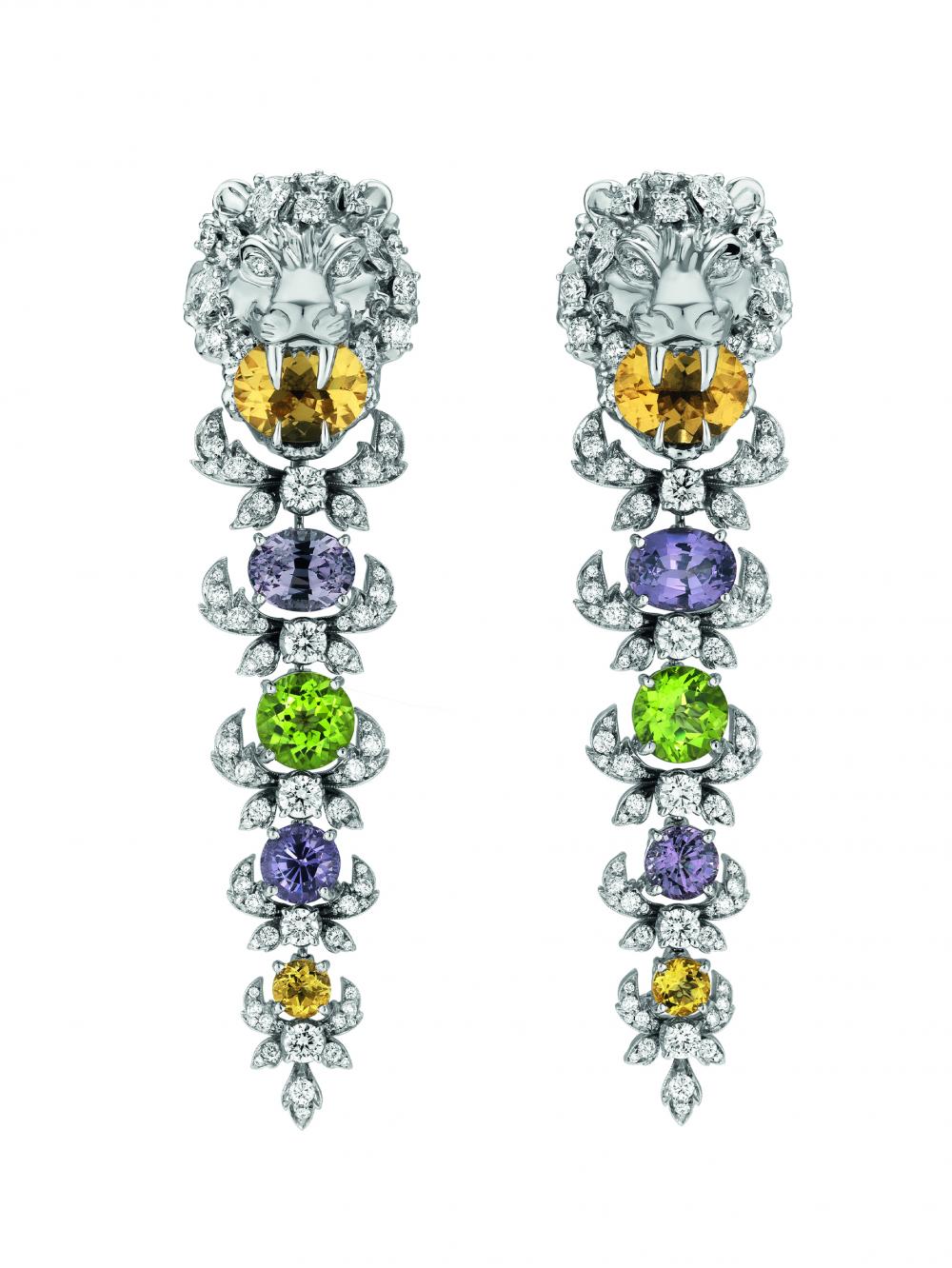 Roma Lionhead earrings and Roma necklace with micro-mosaic depicting the Temple of Hercules. 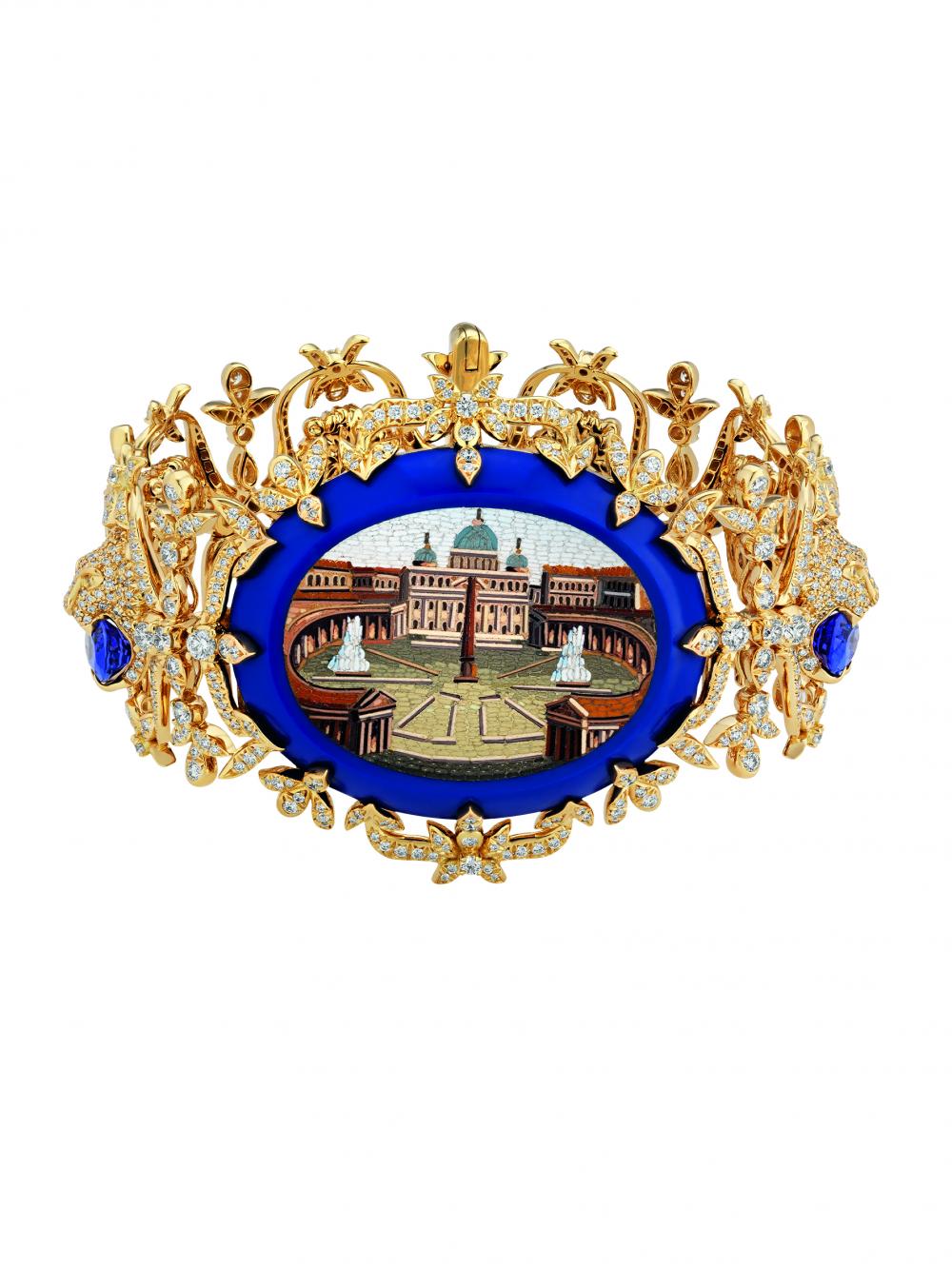 Piazza San Pietro is captured in a meticulously-crafted micro-mosaic. 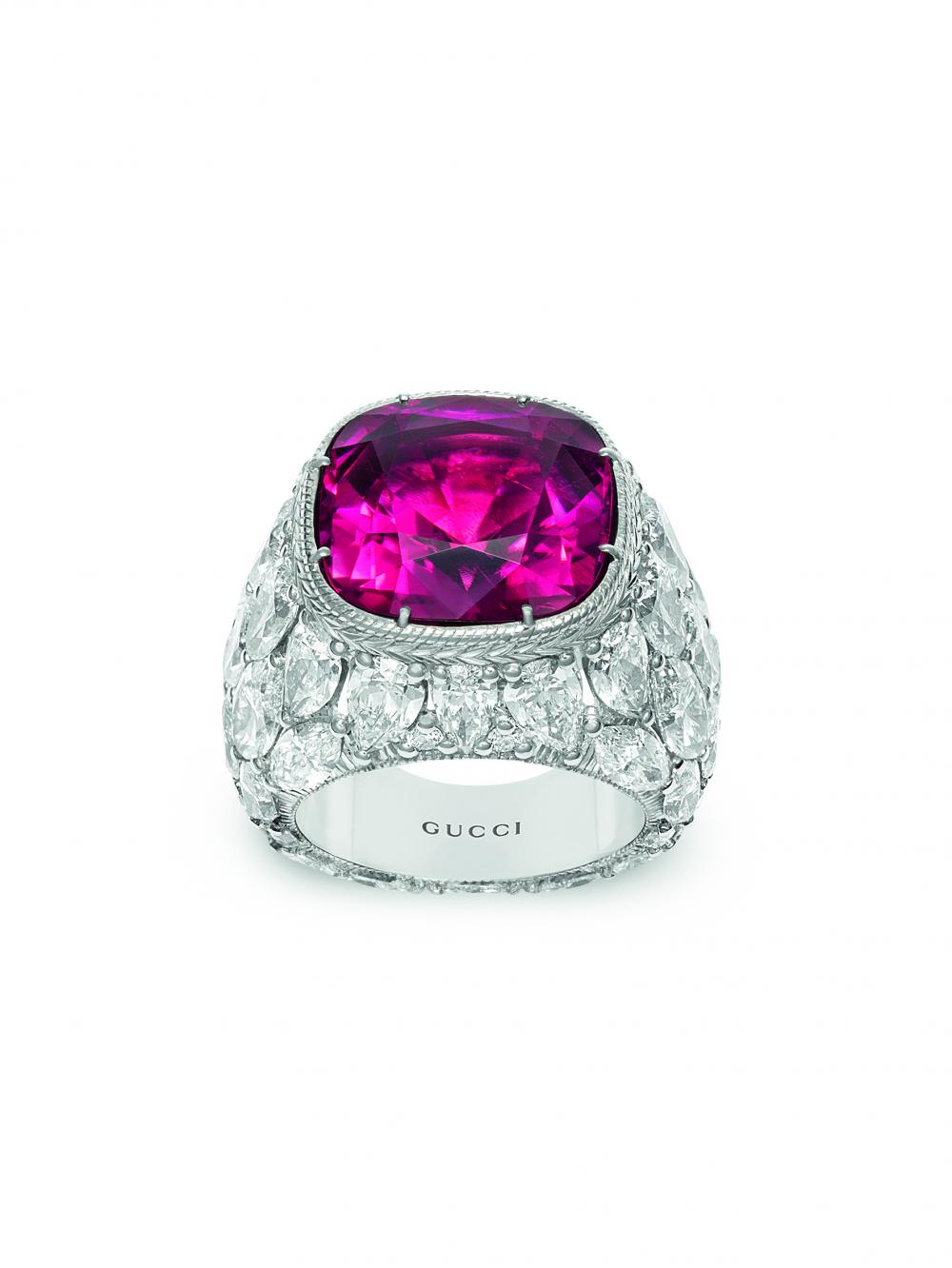