WHY DID YOU DECIDE TO MARKET E-BOOKS AND E-MAGAZINES IN THAILAND? 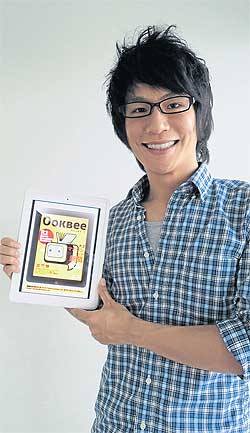 When I began using an iPad and iPhone, I saw great potential in them. I decided to focus on developing e-book apps for the two devices. I began reading e-books and e-magazines via foreign developers and I knew that my company could develop the same kind of app for Thailand. We now have the biggest selection of e-magazines in the country. We work with around 100 local publishers and the number is growing.

HOW HAS THE THAI PUBLIC RESPONDED TO E-BOOKS AND E-MAGAZINES?

The market has grown exponentially. During the first two months we had about 20,000 users, but in December alone, we had over 200,000 new users. Sales of e-books and e-magazines have grown 20 to 30 times. We still receive many questions regarding how to use our apps because it's new to people.

WHY ARE PEOPLE TURNING TO DIGITAL BOOKS AND MAGAZINES?

Some magazines create new layouts for their electronic versions. They add interactive elements such as audio and video. You can rotate products in the ads. In music review columns, readers can touch the screen to listen to song samples. In movie reviews, they can watch trailers. Also, subscription fees to digital versions are lower than their physical counterparts. Electronic books fit better with the lifestyle of people today. The experience may not be the same but there are advantages. The most obvious is that stacks of magazine take up space, while you can carry an entire bookshelf with you on a portable device. When you buy new a device, you can use your account to get all the issues you've already paid for.

WHAT EFFECT DO DIGITAL PUBLICATIONS HAVE ON THEIR PHYSICAL PRECURSORS?

In the short term, it's just a new way of reading. Sales of electronic books and magazines are still much smaller than paper versions because people who want to experience e-books need to have an electronic device and app. It's a niche market but it's growing. It will take years to see if electronic books will have a negative effect on paper book sales. Electronic versions of books and magazines can be used to complement their physical form, reaching both people who read on paper and on electronic devices.

I want to publish works of independent writers in electronic forms. Conventionally, if you want to have your book published, you have to approach a publisher who has to invest in you. With us, they can get published at a much lower cost.

Thirty-four-year-old Natavudh "Moo" Pungcharoenpong holds a Bachelor's degree in aerospace engineering from Kasetsart University and a Master's degree in industrial engineering from the Asian Institute of Technology. Moo is the CEO of IT Works, a company that is behind many Thai e-book apps that run on iOS and Android systems. These apps, including two of the top-grossing book apps on Apple Thai store - AIS Bookstore and B2S eBook Store - were developed on the company's digital publication platform, Ookbee, which recently had its first anniversary.