If crime thrillers are not your typical read, you might not be familiar with Jake Needham. The crime novelist has already published four works of fiction. His first novel, The Big Mango, released more than a decade ago and subsequent books Killing Plato and Laundry Man were set in Thailand, while his last novel, The Ambassador's Wife, took place in Singapore. 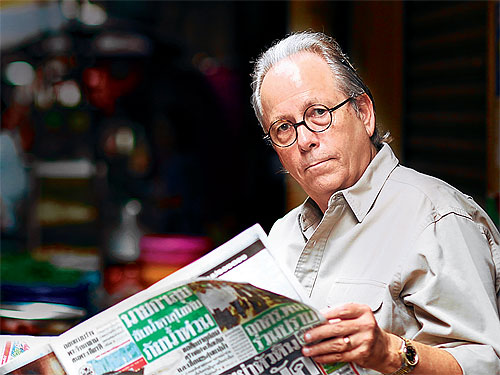 As demonstrated by Needham's "Letters From Asia" blog, which the author began last November, the boundary between reality and his fiction is blurred. His weekly posts reveal some of the racier or unknown sides of the Asian cities that appear in his novels and the accompanying photos only go further to give his work a sense of realism. So what if you were to learn that his forthcoming novel, A World of Trouble, tells the story of how an exiled former prime minister of Thailand is seeking the possibility to overthrow the current Thai government by using his fame as an army hero? Exciting, isn't it?

For those who may wonder why he chooses to set his crime thrillers in Asia, there are two particular reasons. Firstly, Needham once practised international law and worked the borderlines of the Pacific Rim, a place, as he puts in his online autobiography, where cultures collide and governments just struggle to keep up. "Needham certainly knows where a few bodies are buried", is what Asia Inc once wrote about him.

Secondly, although born in the United States and graduated from Rice University and the Georgetown University Law Center, Needham has lived in Hong Kong, Singapore and Bangkok for the past 25 years.

Married to a former Bangkok Post columnist, Needham, along with his wife and two sons, divides his time today between homes in Thailand and the US.

A World of Trouble is published next month.

In your latest novel, A World of Trouble, you fictionalised Thaksin and Yingluck Shinawatra. How did you get the idea?

Well, I don't know. You know what happened and is happening in Thailand is really interesting. People around the world, I mean, outside of Thailand and Asia, want to know more. So I thought it might be good if I could make it into my novel.

There is Jack Shepherd (the protagonist in Killing Plato and Laundry Man) in Hong Kong. He needs a job and working for General Chalerm Kitnarock as a lawyer is a job, so he takes it. The general lives in Dubai. He is in fact an exiled former prime minister of Thailand and is still a Thai army hero. He seeks the possibility of regaining power. But the problem is that Thailand already has a new prime minister. She is female and one of Jack's ex-girlfriends. So he is caught between two friends.

Exciting? That's how the idea comes out.

On your blog, you labelled The Ambassador's Wife as a sort of guidebook to Singapore. So what if readers take A World of Trouble as a guidebook to Thailand, especially Thai politics?

That's definitely not my idea. I'm a writer. I'm not teaching, just entertaining, though its natural that people take books as a lesson.

Yes, some of the set-up of my novels, including The Ambassador's Wife, is true. For example, both the streets in Singapore I have visited and the apartment I once lived in with my wife in Bangkok have appeared in my novels. But that just doesn't mean the story itself is true.

So later people asked me another question: "Jake, how did you know there would be a female prime minister in Thailand?" I said: "Well, I didn't know. I was not predicting. I just made up a story, though maybe its difficult for you to believe."

Another point is the story says the exiled former prime minister is an army hero, but the reality is completely opposite.

What do you think when some media call you a local Bangkok writer?

That's sort of weird. I did use to spend lots of time in Bangkok after my children started school. Before that we travelled a lot and had no idea of settling down in any place. We wanted to be sort of around. But things are different when you have children. We had to make a choice. The choice at that time was Bangkok. I mean spending time in Bangkok more than in any other city, though we did spend some months in America each year.

But a 24-hour flight from USA to Thailand is tiring. I used to do that a lot. But when you are getting old, it can be really lousy. So now I usually spend nine to 10 months in America, two or three months in Bangkok every year. My wife may spend more time here (Bangkok) than I do.

How do you usually do your writing?

Normally I write in my study on computer. I used to refer to dictionaries when having difficulty in spelling; but now I will Google it. Need to check your spelling, click; unsure about a wording or some facts, click. You get it done in one second. Everybody does it, right?

But I will print my novel out. Some times chapter by chapter, most of the time the final draft. I need to know how it looks on paper. You know a computer screen always gives you a quick but unimpressive reading. It leaves nothing in your mind. But if you print it out, you can see how black it is. If it's too black, you've got to readjust the paragraphs, fonts or the whole format. It's like children's toy bricks. You piece words together to see how it works. You want to build a pretty architecture. But before you reach that, you have to break your story down to every small bite to see whether it makes sense on paper.

How do you communicate with your readers? Via your blog?

Well, I do communicate a lot with my readers worldwide. A musician playing piano doesn't expect silence as feedback. That's why I set up a blog: "Letters from Asia".

But at the very beginning, I didn't check it that much though I did have some link with my readers. As the number of my readers snowballs, I feel it's a responsibility to send something through the existing link. When I do this, I'm amazed to find how many nice people there are. They might just meet me online and want to say "Hello", but sometimes they do give nice comments on my books. One of them posted on my Facebook: "You delivered me to another place and it's nice to be there." It's a really nice comment. Sometimes I find some of my readers can write even better than I do. I'm happy that now we have internet. You don't need the publisher or distributor as a middleman to reach readers or let readers reach you. I know some writers might have readers who contact them seeking a favour. But I never have such a reader. They are all very nice people. I think I'm really lucky. Whatever you do, you need to be a little bit lucky, right?

Generally I read printed non-fiction. They might be history, documentary or anything. But they are facts. So its better to take it a little bit serious. But for fiction, e-books are OK. Sometimes you just glimpse and don't want to take another look.

Normally I read three books per week, but it really depends.

What kind of city is Hong Kong in your eyes?

Hong Kong is a nice city. I stayed there for a long time. I agree if some people say its a desert of real art and culture, but I see it as a pool where all kinds of ideas, new or old, Eastern or Western, fancy or not so fancy, quickly come through. You are exposed to everything new in the world at a speed much faster than you may imagine. That's cool.

By the way, Macao is also good, though maybe not as cool as Hong Kong.

How do you perceive the difference between books and movies since you were previously a film producer?

Books are interactive. If you read a book, you spend hours, even days with the writer. You are thinking, analysing, even re-creating. Everybody will have a slightly different interpretation on the same single book. You read a novel to know you are not alone. Other people see the place and understand it as you do.

Movies are different. You just sit down, shut up and watch. Accept whatever comes to you. It's a passive process, you have no say.

Do you think its more difficult nowadays to earn a living by writing as e-books and free reading material are always available?

I think it's just difficult in a different way. Anytime, anywhere, it's difficult for writers to earn a living. Only a very few of them can live an easy life.

Publisher used to be a very exclusive profession. For a writer, the saddest thing is to come across a crappy book selling millions of copies just because he has access to a big publisher. But now with internet, everybody can be a publisher without a high grant fee. We may even have our ideas transferred firstly to words and then to readers without any publishers. The internet takes out all middle things. That does mean a lot to writers. You have to think about how people will consume your products, be they newspapers or magazines or novels. It's readers' choices now while in the past it was completely publishers' decisions whether your book will be on a shelf or not.

But it is not only a challenge. You know its nice to have publishers put your book on a shelf, but its also nice to click it on Amazon. It's especially good for me as a writer with readers worldwide.

What's your favourite place in Bangkok?

My study. It might be rude to say so, but I really can't think of another place more comfortable than my study. We made a great effort to put everything here. I like my books, my painting and my table which was shipped from the Philippines. It's made of wood. I like leather and wood; they make me feel real. I don't want a desk. The study makes me feel safe, unthreatened and very personal.

I am sort of a click man. Writing, shopping, Facebooking and everything can be done on computer. I don't need to go out that often.

But if I have to mention a place, it's the New York Steak House, at JW Marriott, Sukhumvit. It's quiet and low-key. There everybody knows me. I can go and leave quietly and be left alone. I don't need to be asked what I want.

What are you reading now? And any future writing plans?

There are four books. Blue Nights by Joan Didion, The Tears of Autumn by Charles McCarry, The Gate by Francois Bizot and Legends by Robert Littell. I am thinking about writing more about Jack Shepherd, but also want to make a follow-up story about the Singapore cop Samuel Tay (from The Ambassador's Wife). I haven't decided yet.